When you are marrying the love of your life, it is understandable that you’d want your wedding photos to be outstanding to let the whole world know.

This Vietnamese couple, however, has gone above and beyond to make their wedding photos special. Bringing blankets and pillows, they boldly posed for intimate shots right on the streets of Hanoi, much to the bewilderment of passers-by.

The photos were taken at various Hanoi landmarks

This one-of-a-kind collection is an idea from Hai Le Cao, a photographer living in Hanoi. He shared with The Smart Local Vietnam that with this concept, he wants to encourage Vietnamese youths to follow their hearts and live their lives to the fullest, ignoring what the world might say.

In one of the shots, the couple is seen huddling in a white blanket next to a picnic basket, looking at a stunning view of the sun setting over the West Lake. 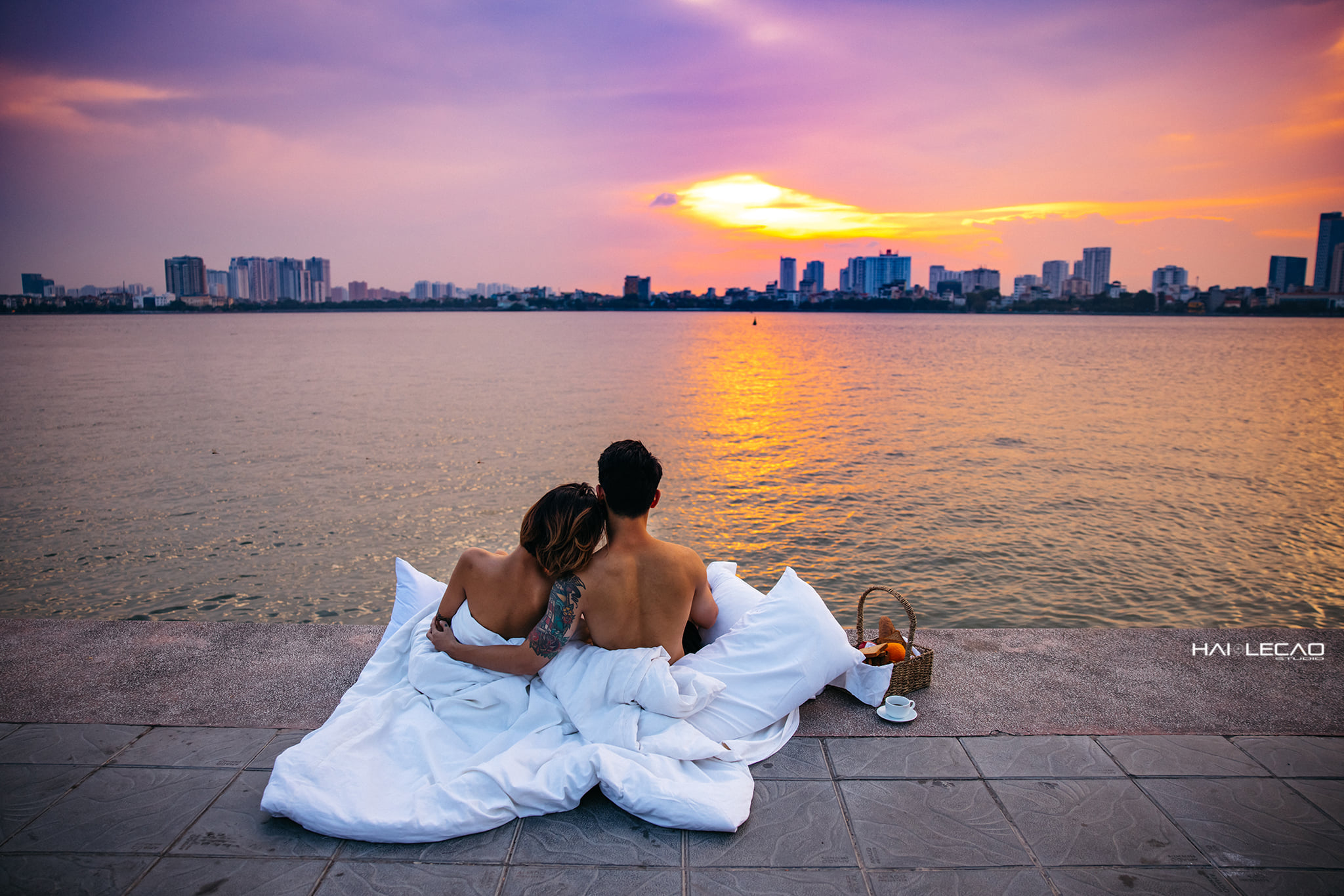 In another, they posed as if they were enjoying a carefree weekend morning in bed, savoring a cup of tea and reading a magazine. Instead of the bedroom, however, they were at the Đông Kinh Nghĩa Thục Plaza, a major traffic intersection connecting the iconic Hoàn Kiếm Lake to the Hanoi Old Quarter. 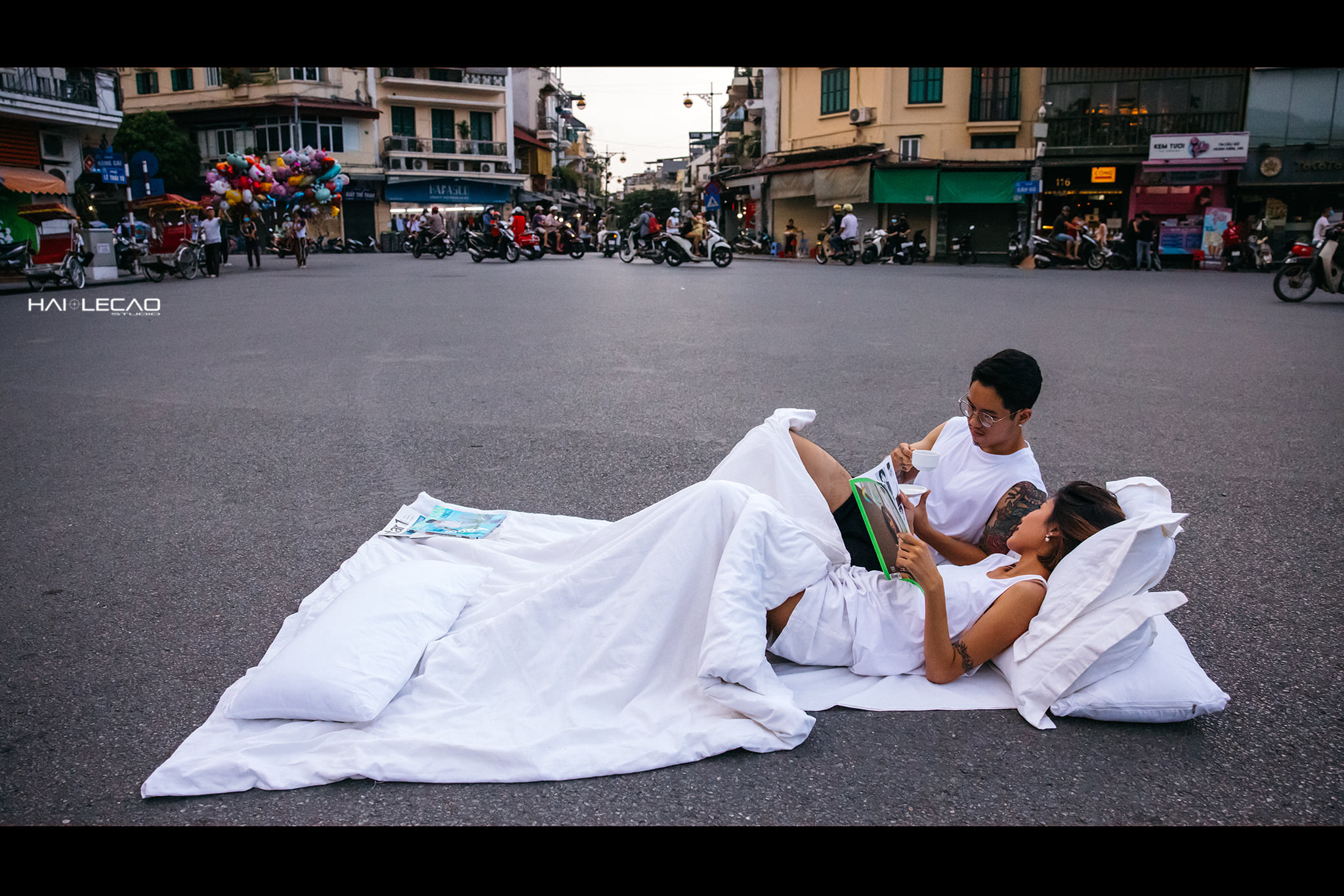 They also took their photoshoot session to the Long Biên Bridge, a historical landmark of the city. Cuddling on the side of the road, the soon-to-be husband and wife casually watched as vehicles drive by. 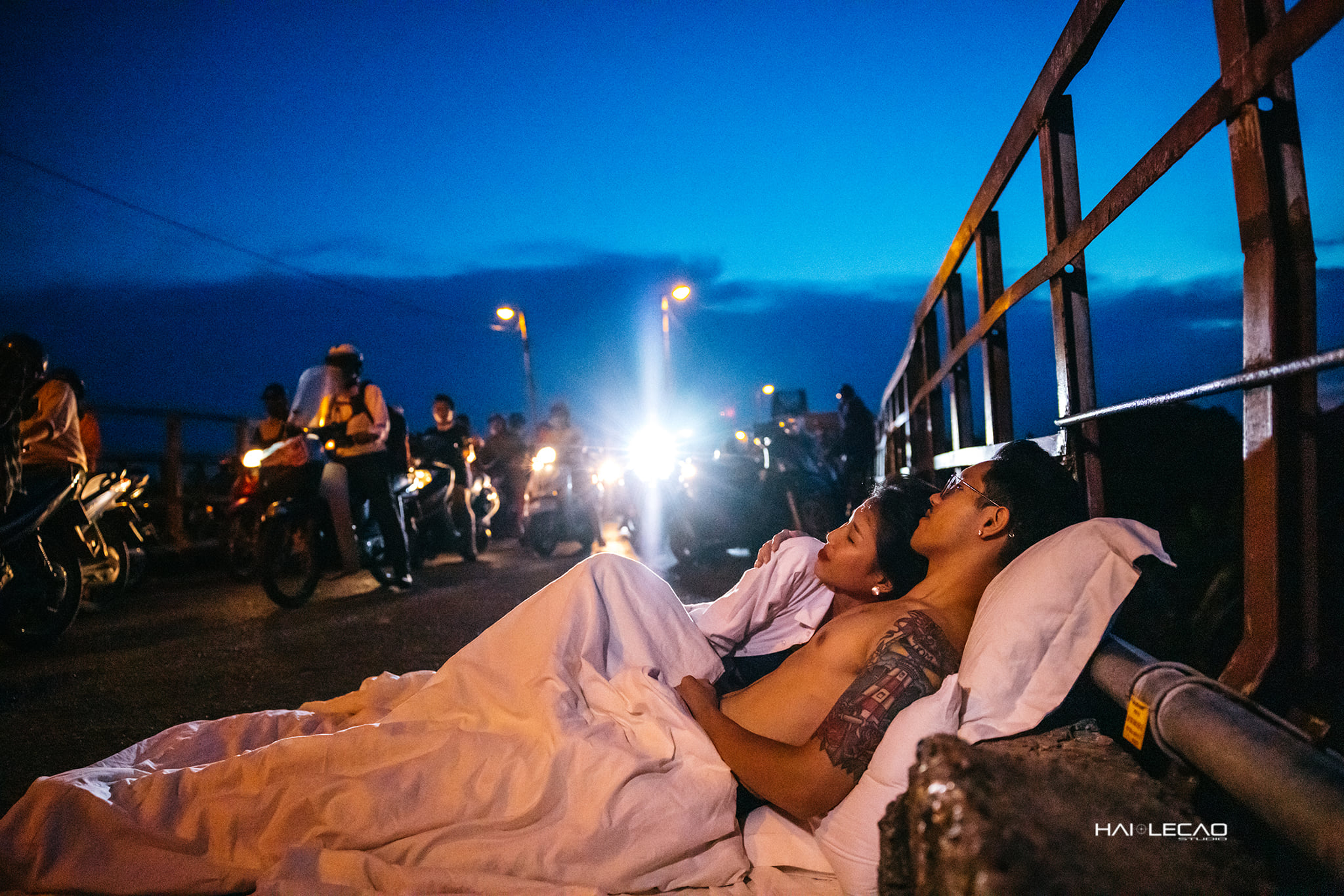 Netizens are divided over the pictures

The unique wedding photos have sparked lots of chatter on the internet over the past couple of days. Some netizens find them cute and memorable, while others think they’re over the top.

This shot at the West Lake, has received praise such as “This is incredible!” and “I really like the vibe of this shot!” 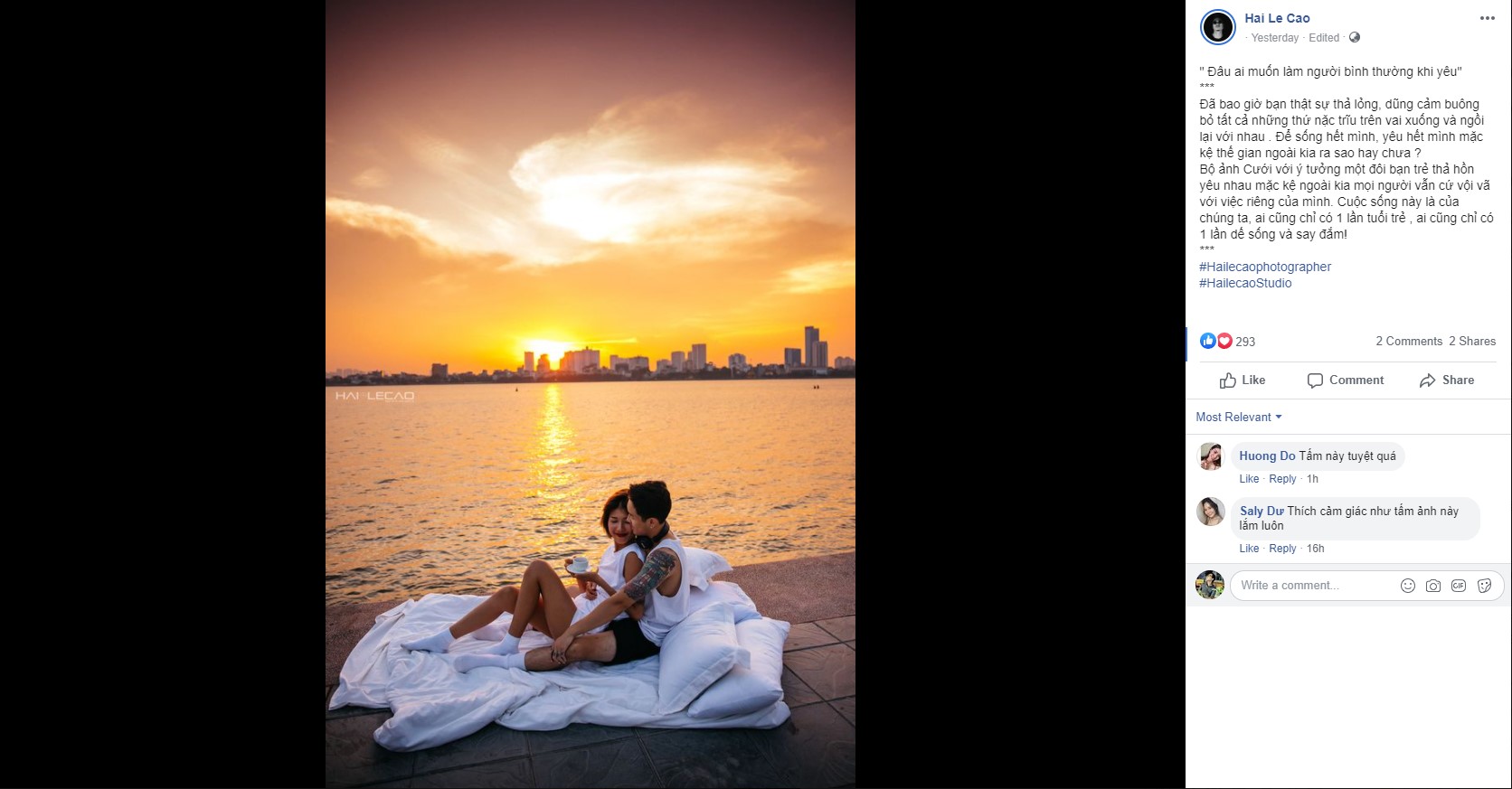 On the other hand, some other photos were less well-received. The pictures of the couple on the Long Biên Bridge, for instance, have been criticized by many, with some saying that they were causing traffic congestion.

“It was cute at first, but this one is just weird,” Facebook user Trung Minh wrote.

Another user, Ngoc Anh Nguyen, says, “I don’t want to be rude, but this looks very inappropriate.”

“No wonder there was heavy traffic congestion on Long Biên Bridge,” a comment from netizen Phương Thảo Nguyễn stated.

Addressing comments about the photos causing traffic jams, Hai Le Cao told The Smart Local Vietnam that the team was aware of potential issues with Hanoi’s traffic and had planned the photo session carefully to avoid inconveniencing anybody in the area. In the end, everything went smoothly.

Meanwhile, this shot, which shows the man and his soon-to-be wife lying on a rooftop, raised concerns about safety and hygiene issues. 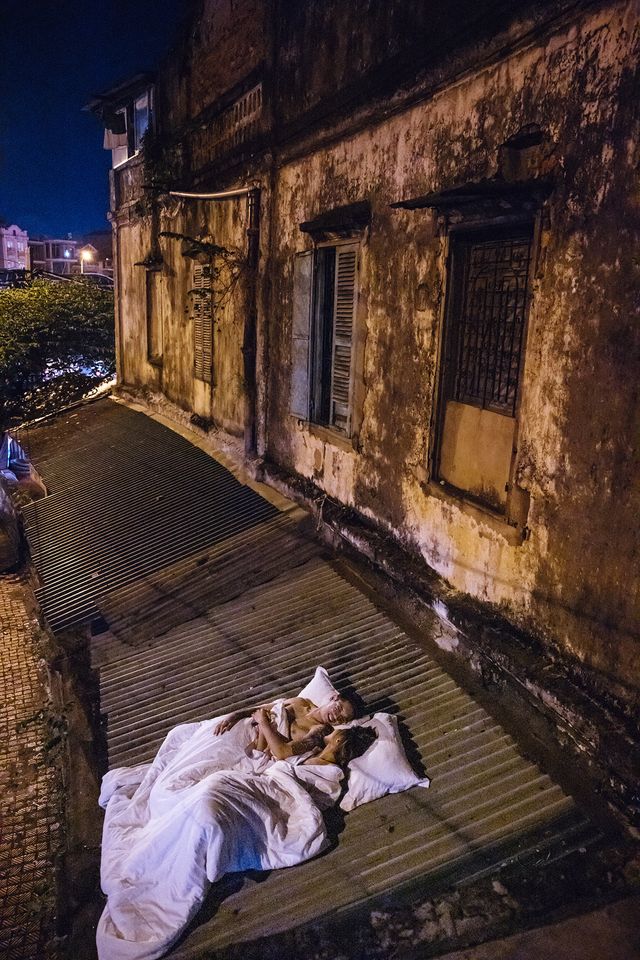 “If you find it meaningful, that’s your opinion. I personally think it looks dirty. I’d be more afraid than find it beautiful. Why not pick somewhere brighter and more hygienic?”, a netizen commented.

“The roof looks as if it’s about to collapse,” another said.

That said, many still found the shot appealing, praising it as “xuất sắc” (incredible) or “chất” (outstanding).

Despite all the controversies, this unique wedding photo collection no doubt makes for an awesome story for this soon-to-be-married couple to tell their children in the years to come.

And if you are also planning on doing something out of the box for your own wedding photos, do be considerate – just as Hai and his customers have been – so as not to cause disruptions to others. 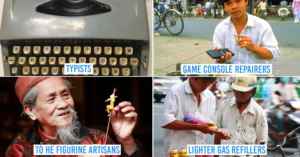 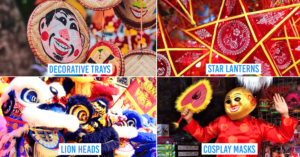