It’s a known fact that traffic in Vietnam is notoriously chaotic. If you’ve lived in the country for long enough, then you’ve probably been pulled over by traffic policemen and fined even though you were driving exactly the same way as everyone else was, unaware of what mistakes you’d made.

So, if you’ve ever been confused or frustrated by such encounters, here we have summed up 8 common driving mistakes in Vietnam to watch out for. Learning these will help you equip yourself to stay safe on the road, and of course, save you from getting fined. 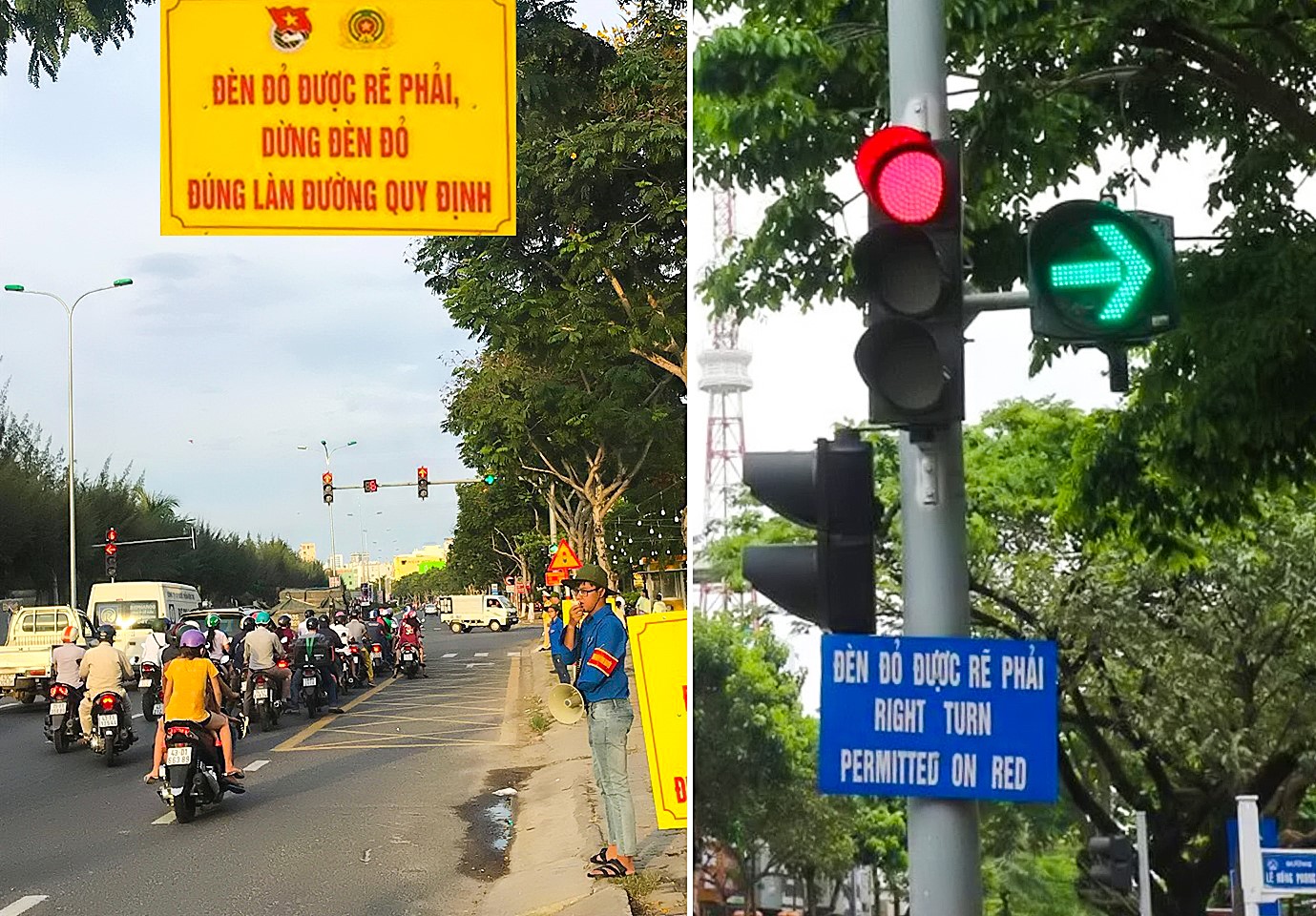 A lot of drivers in Vietnam assume that they are automatically allowed to turn right at red lights, but this is simply not the case. If you pay attention, you’ll see that some red lights are accompanied by signs that say “Đèn đỏ được phép rẽ phải” (Right turn permitted on red) or a green light arrow pointing to the right, while others do not.

Article 10, Clause 3 of the National Technical Regulation on Traffic Signs and Signals (QCVN 41:2019/BGTVT) states that at red lights, vehicles must stop in front of the line on the road, or in front of the traffic light post if there is no line. As such, unless there are other signs that allow you to turn right at a red light, you’ll be fined for violating traffic lights as soon as you cross the line.

2. Driving straight while in the right-turn lane 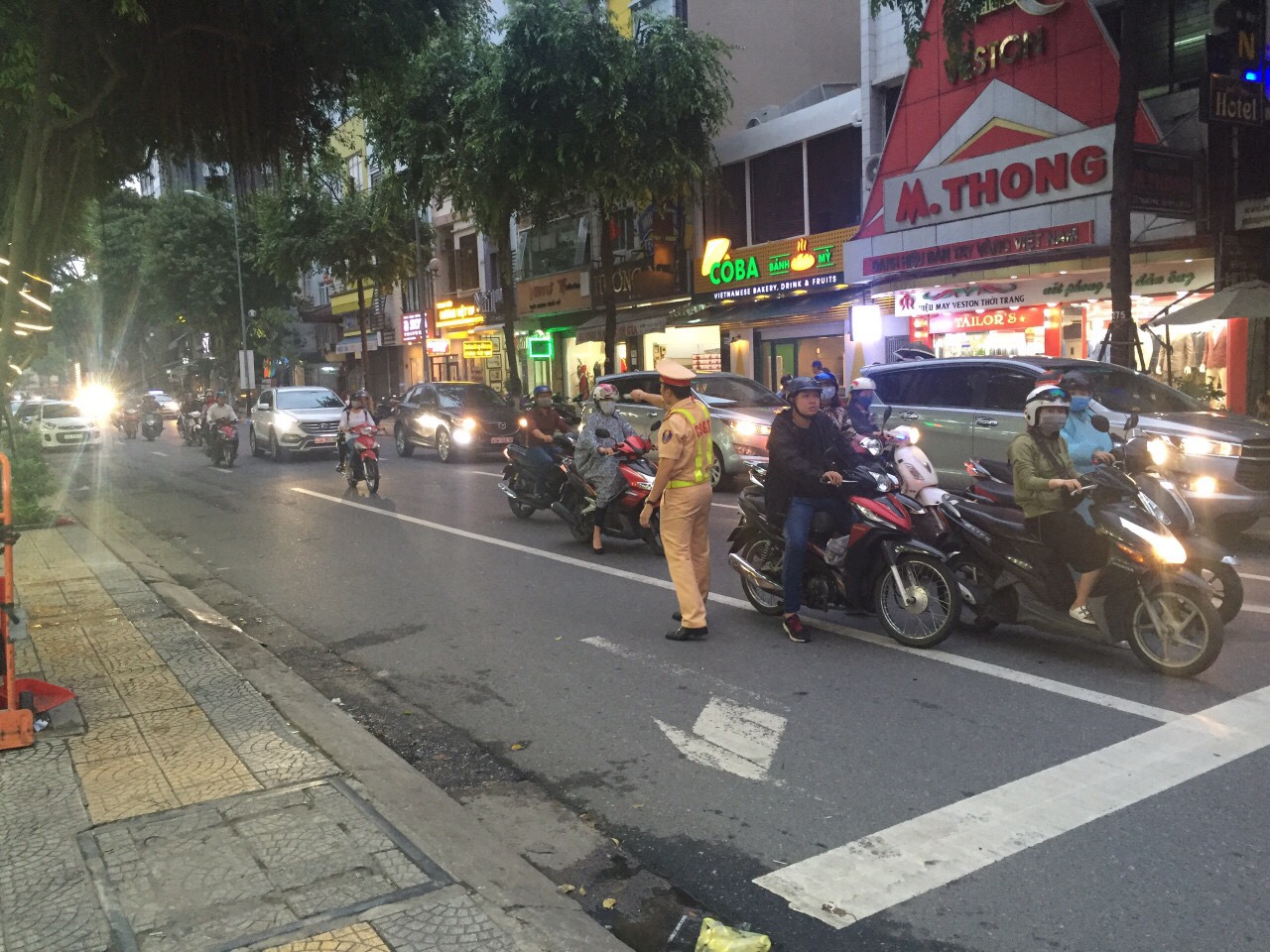 If you intend to drive straight, you are not allowed to go into the lane with an arrow pointing to the right.
Image credit: danang.gov.vn

Very often at intersections, you’ll see road markings dividing the road into different lanes with arrows pointing into different directions. These arrows indicate the direction you’re allowed to go when you’re in a specific lane.

Do note that this violation is not to be confused with “driving in the wrong lane”, which is when you go into a lane dedicated to another type of vehicle – for instance, driving a motorbike into a car lane. Such lanes are mostly on highways where there are hard barriers or solid white lines separating the lanes, and overhead signs showing which vehicles are allowed in which lanes. 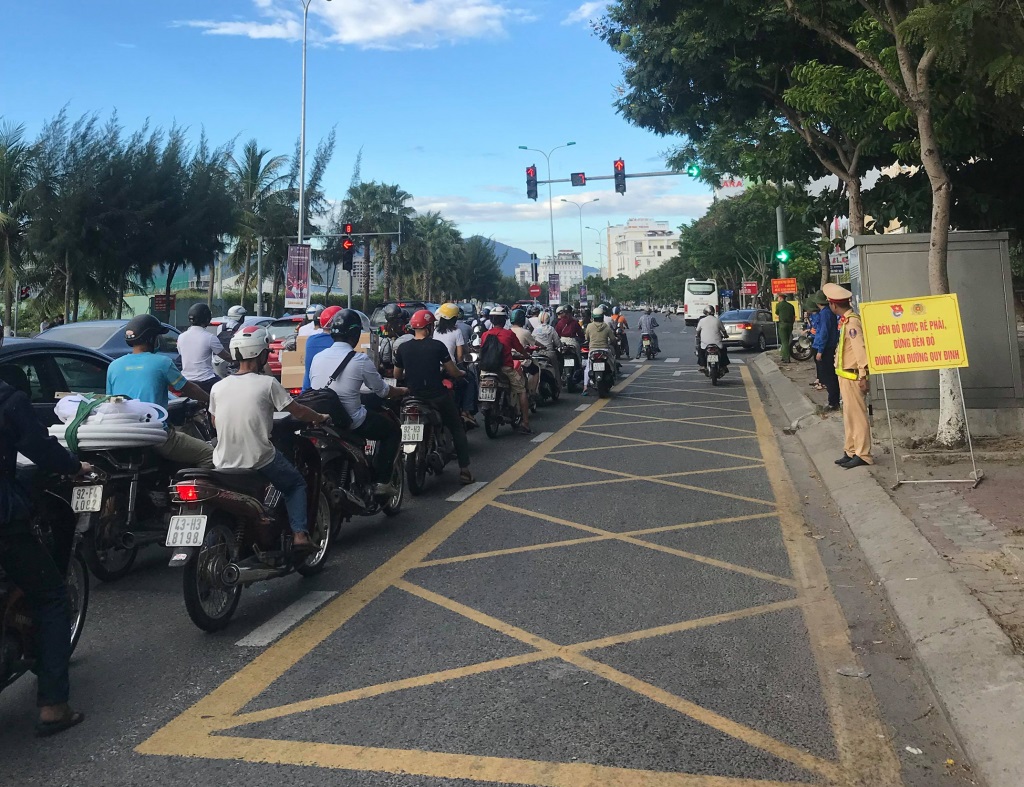 Another type of road marking that you might come across is a criss-cross pattern. They indicate that vehicles are not allowed to stop on a specific road section. 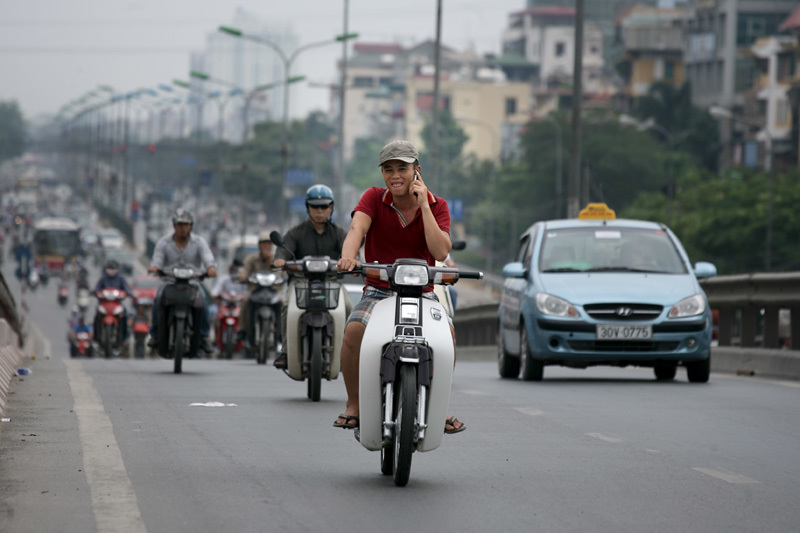 In Vietnam, it is not uncommon to spot people using cell phones or headphones while driving their car or scooter. They could be ride-hailing drivers browsing for customers, casual commuters looking at Google Maps to navigate the intricate streets of big cities, or just someone seeking solace from all the traffic noise by listening to music from their headphones while on the road.

5. Driving with high beam headlights on 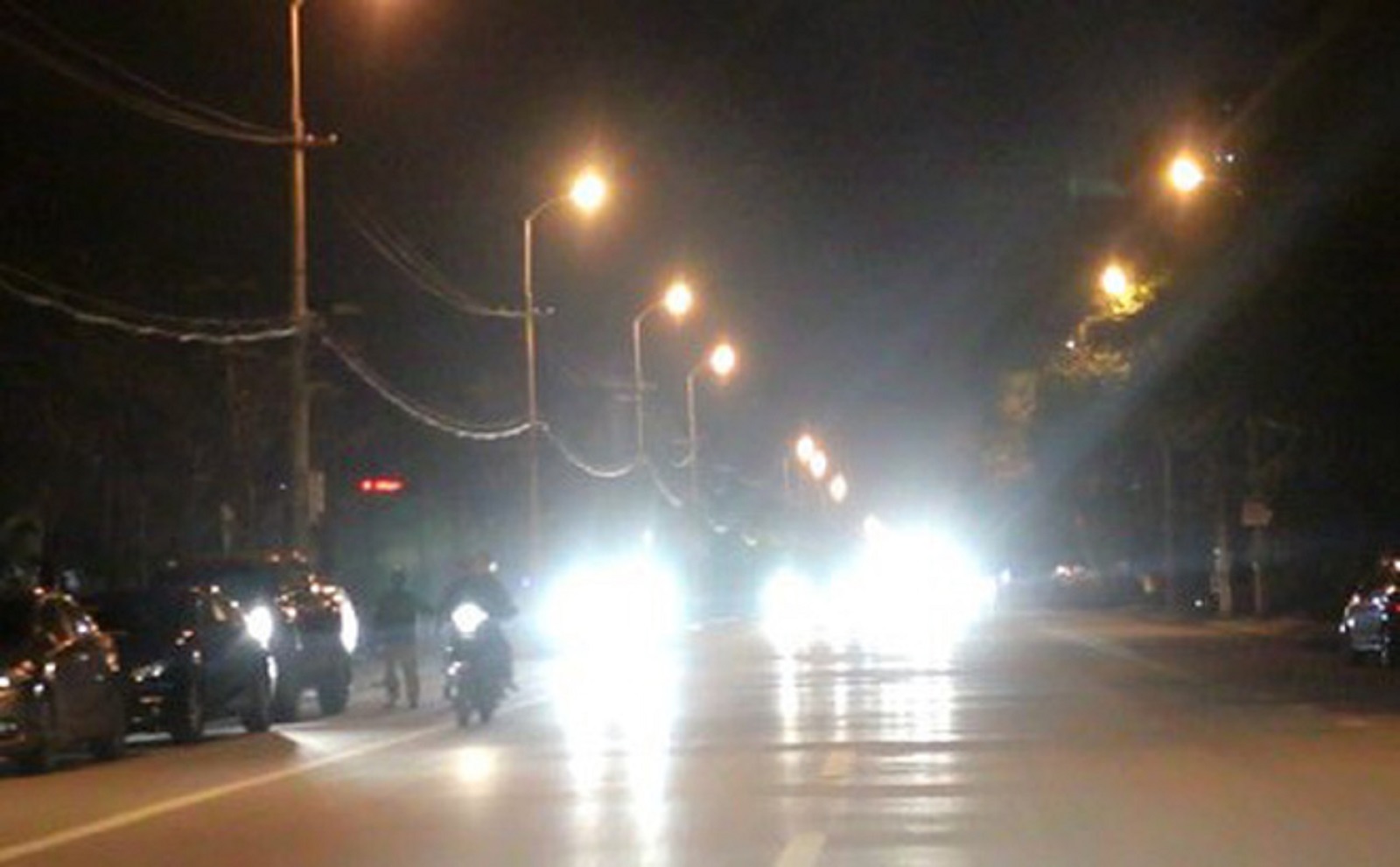 It is common knowledge that you’re required to turn on the headlights of your vehicle while driving at night. However, a lot of people don’t differentiate the two headlight options their vehicle offer: high beam headlights – which project the light beams straight ahead, illuminating a large area far in front of you, and low (or dipped) beam headlights – where the light beams shine in a more downward trajectory and only illuminate a short distance ahead.

Many drivers opt to stay in high beam mode all the time, mistakenly believing that the farther their lights can reach, the better. However, this is only true when you drive in rural areas with limited street lighting. In big cities where there are plenty of lamp posts to fully light up the streets at night, the purpose of your headlights isn’t so that you can see others, it’s so that others can see you. 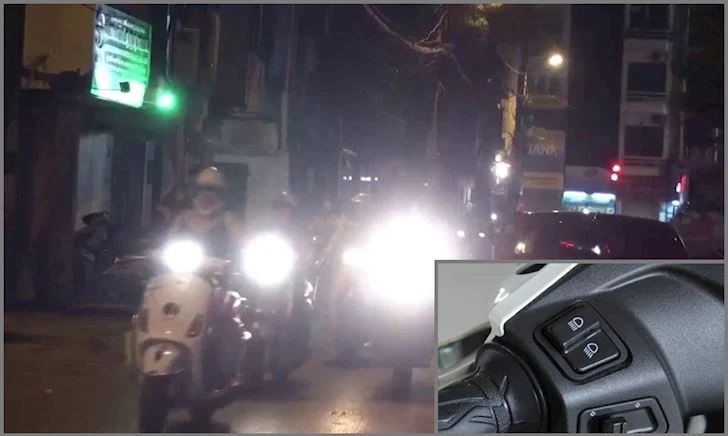 Since they shine at eye level, high beam headlights effectively blind anyone driving while facing you, increasing the chances of an accident. As such, while driving in cities at night, you must drive with low beam headlights, or face a fine of VND800,000-VND1,000,000 (~USD34.67-USD43.33) if you drive a car, or VND100,000-VND200,000 (~USD4.33-USD8.67) if you drive a motorbike or motorcycle. The same fine is applied if you drive without headlights at all between 7PM-5AM, or while driving in foggy weather that limits your vision.

Even when you drive in rural areas that don’t see much traffic, it is still considered common courtesy to switch to low beam headlights when you see someone driving in the opposite direction and switch back to high beams when they’ve driven past. 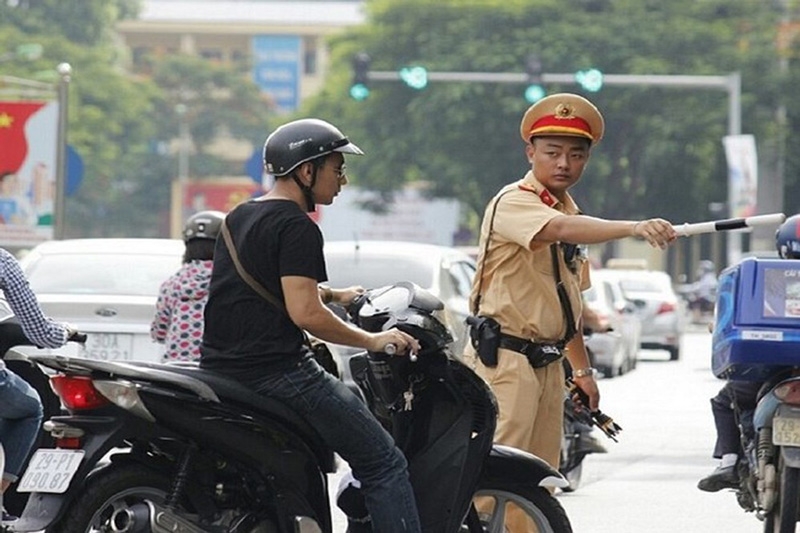 A man being pulled over by a traffic policeman for not having mirrors on his motorbike
Image credit: thethao247.vn

Mirrors are handy tools that let you see behind your back, allowing you to see if someone behind is trying to overtake you before you can make a turn to ensure your safety. They are indispensable equipment for cars, but some motorbike and scooter drivers consider them as more of an inconvenience. They’d argue that mirrors get in the way when they need to park in crowded areas, and they can just turn their heads to see behind them before making a turn.

However, traffic laws in Vietnam state that motorbikes and scooters must have at least a mirror on the left – the reason being that these vehicles drive on the right side of the road, meaning when they make a left turn, they need to cross the entire width of the road with many other vehicles coming from behind on their left.

Sure, being pulled over by traffic policemen for not having mirrors on your scooter might lead to you meeting your soulmate, as has happened to this Vietnamese woman. However, this is a one-in-a-million occurrence. In most other cases, it’ll probably end with you getting fined for VND100,000-VND200,000 (~USD4.33-USD8.67).

7. Not turning on the indicator while making a turn 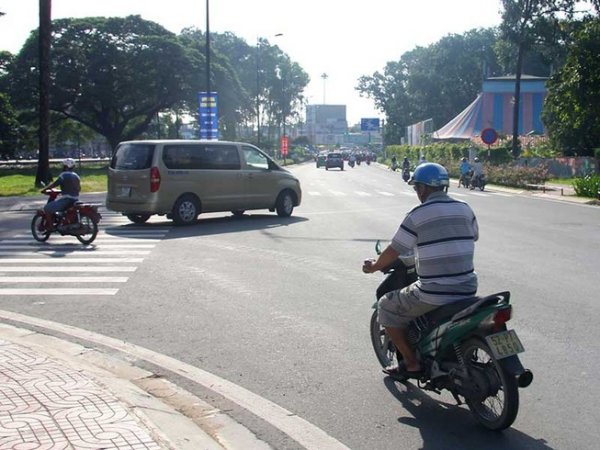 Don’t forget to turn on your indicators while making a turn
Image credit: luatvietnam.vn

Your indicators – often called xi nhan (signal) in Vietnamese – are useful tools that let other drivers know you’re about to make a turn, so that they can quickly adjust their speed and direction to avoid collisions. In Vietnam, however, many drivers forget to turn on their indicators while making a turn.

This often happens to motorcycle or scooter drivers when they make right turns. Again, these vehicles drive on the right side of the road, so it’s easy for them to turn right, which is why many people just make a right turn instinctively while forgetting to switch the right indicator on.

8. Stopping or parking at roads with “No parking or stopping” signs 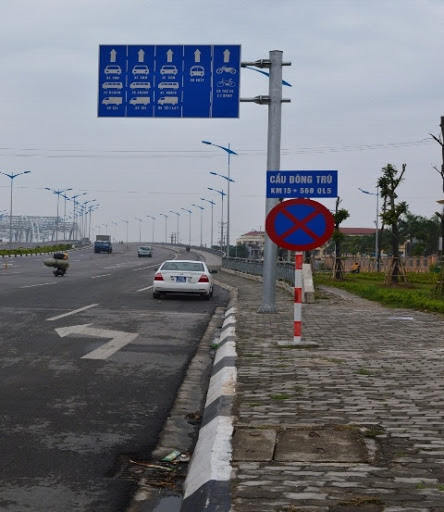 A sign with a red X crossing a blue circle means you’re not allowed to park or stand your vehicle nearby
Image credit: csgt.vn

If you have to stop by the side of the road, maybe while waiting to pick up someone, be sure to pay attention to street signs to avoid parking or standing where you’re not allowed to.

To clarify, a standing vehicle is defined in article 18, clause 1 of Vietnam’s Law No. 23/2008/QH12 on road traffic as “a vehicle that is stationary for the time needed to pick up or set down persons or to load or unload goods or to do other things.”

Meanwhile, a parked vehicle is “a vehicle that is stationary for an unlimited time”.

If you see a road sign that consists of a red circle surrounding a smaller blue circle, with the blue circle being crossed out by a red “X”, it means neither parking nor standing is allowed in that location. 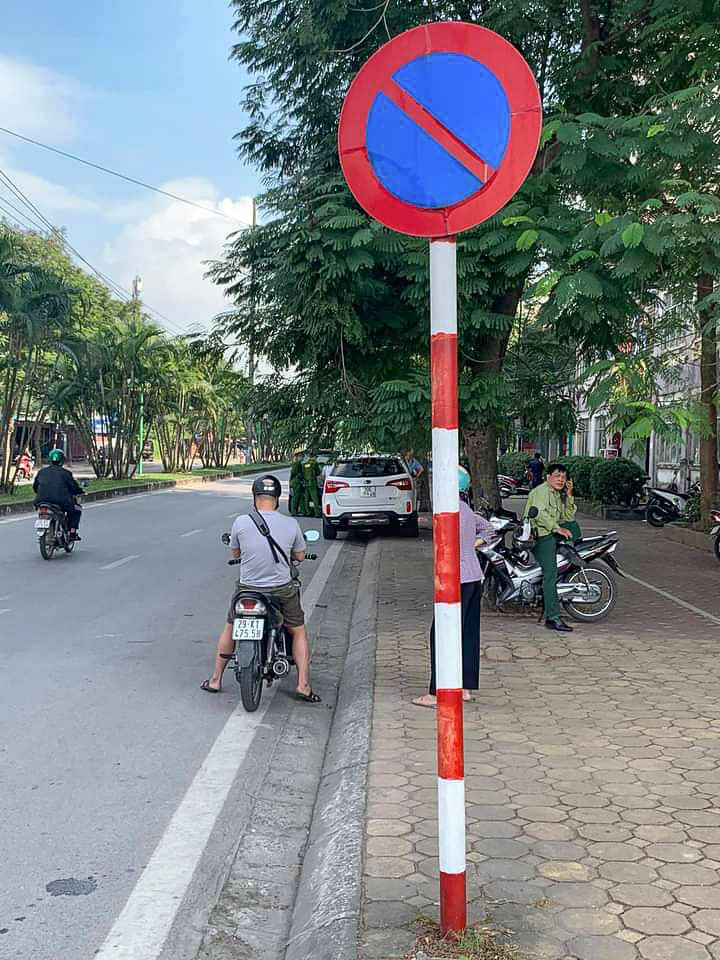 If the blue circle is crossed by only one diagonal red line, it means standing is allowed, but parking isn’t
Image credit: Diễn Đàn Luật Giao thông & ATGT – R 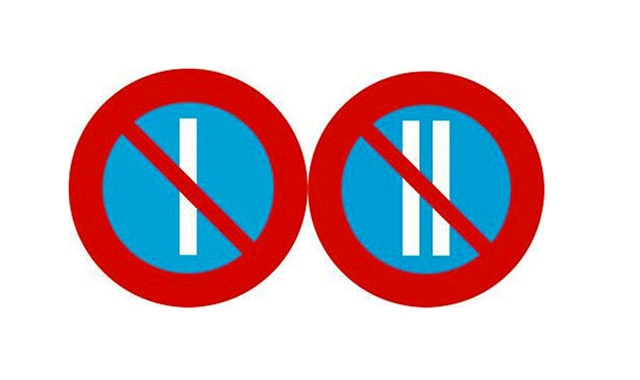 Driving mistakes in Vietnam to avoid

Traffic laws in Vietnam are complicated, and it requires a lot of time, research, and experience to fully understand the ins and outs of everything.

However, if you’re a new driver in Vietnam, these are the 8 most common driving mistakes you should avoid to stay safe on the road.

For more stories from Vietnamese roads, check out: 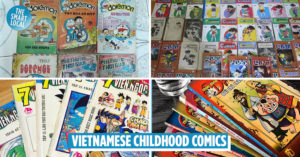 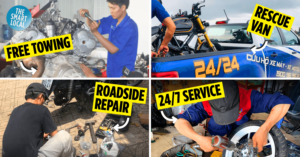