Things to know when driving in Vietnam

Hitting the roads in Vietnam can be an unpredictable experience for many, including both local and foreign commuters – and that includes forgetting Vietnam’s traffic rules. Sometimes you might forget to turn on your indicator lights when making a turn, or accidentally leave your driving license at home before setting out on your motorbike.

Knowing what to expect when being pulled over by a policeman for a traffic violation can sometimes help you resolve the situation smoothly. Here are the things that you need to know when driving in Vietnam, so you can travel with more confidence and ease.

1. Drivers need to bring their driving licenses and vehicle registration 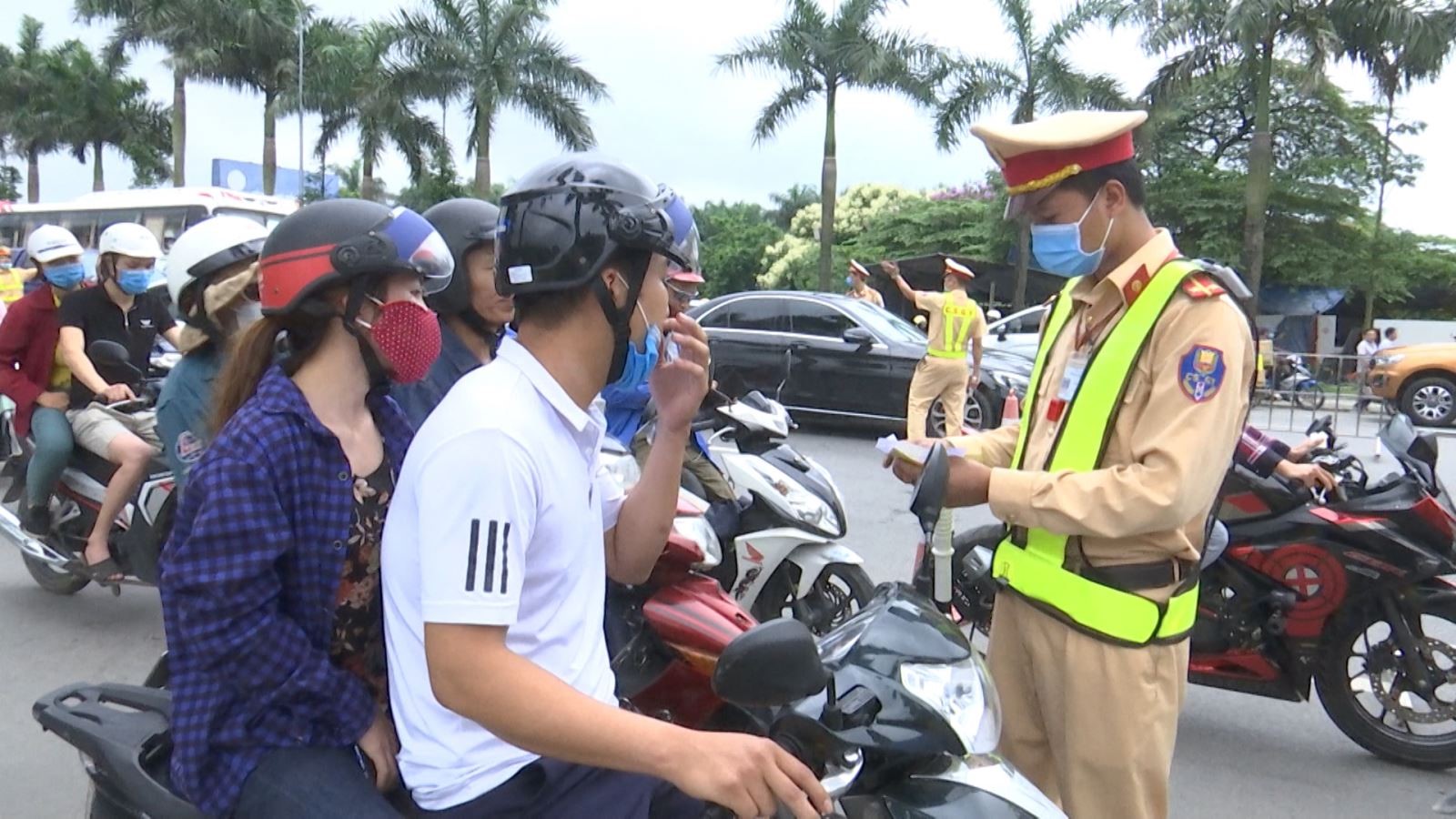 When driving in Vietnam, every driver is required to carry their driving license and vehicle registration. Failure to bring these documents will result in a penalty of VND100,000 to VND6,000,0000 (~USD4.31-USD258.73).

According to Vietnam traffic rules, drivers are required to bring the original versions of their driving licenses at all times, but exceptions can be accepted in 2 circumstances:

Under these circumstances, you can present a photocopied version of your driving license. 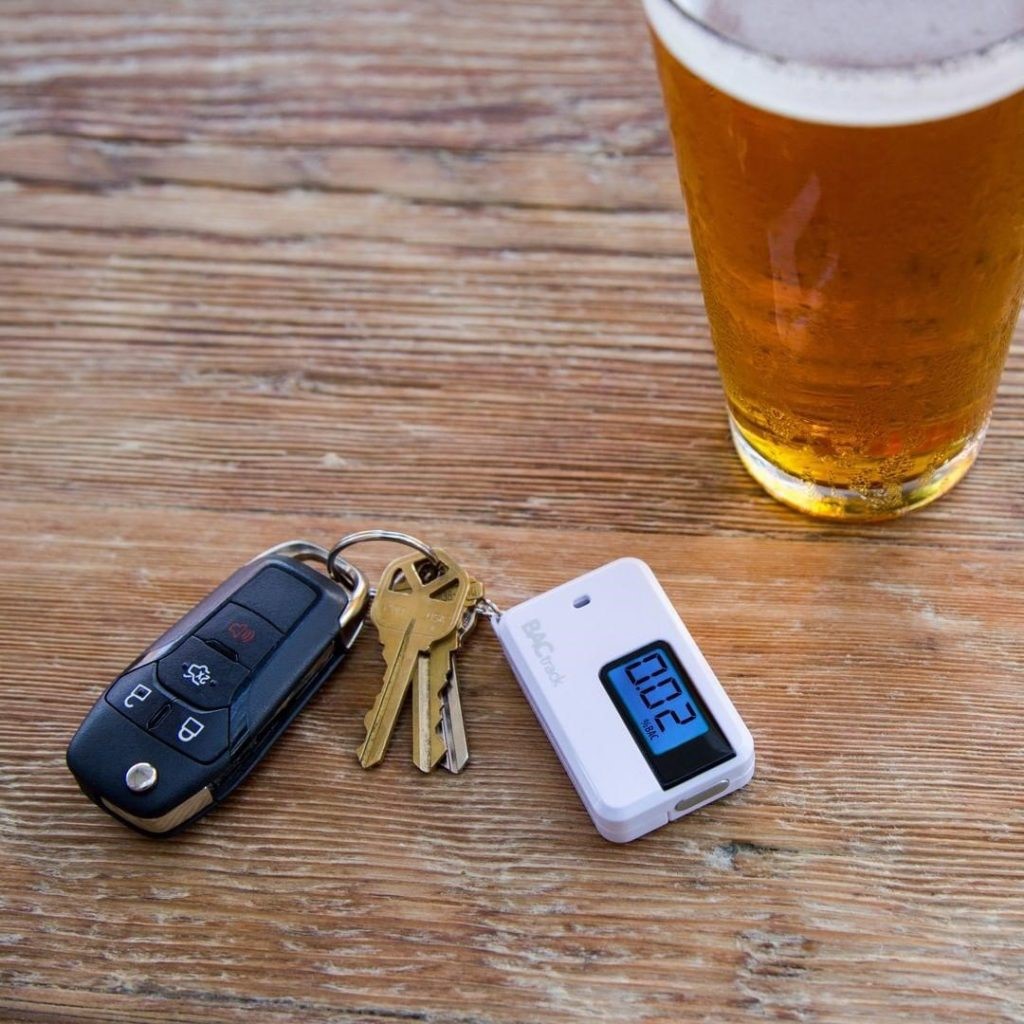 This means that you should keep a tight check on the level of alcohol you consume before driving anywhere – so carrying around a personal breathalyzer can be well worth its price. For more tips on how to have a good nhau-ing time without fear of committing traffic violations, check out our article here.

3. Commuters can record their encounters with traffic police officers 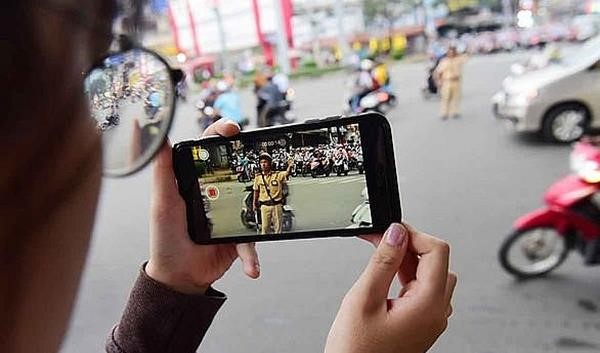 According to Circular 67/2019/TT-BCA’s Vietnam traffic rules, commuters have the right to record, with their phones, cameras, or tape recorders, traffic police officers performing their roles.

The purpose of this clause is to ensure that traffic police officers are performing their roles with transparency and effectiveness.

4. Police have the right to pull you over 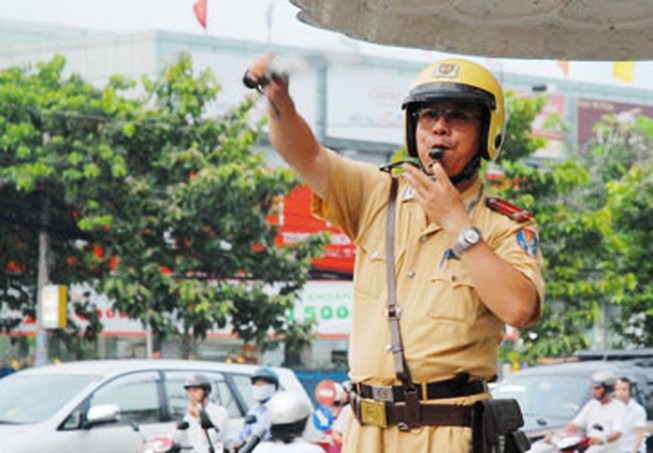 According to Circular 65/2012/TT-BCA, a traffic police officer has the right to pull you over when detecting a traffic violation on your part, either using their hands, a traffic stick, a speaker, a sign, or a barrier.

When pulling you over, the traffic police officer is obliged to inform you immediately of your violations before asking you to present your driving license and vehicle registration.

Take note that you do not have to present your personal documents before knowing your violations. 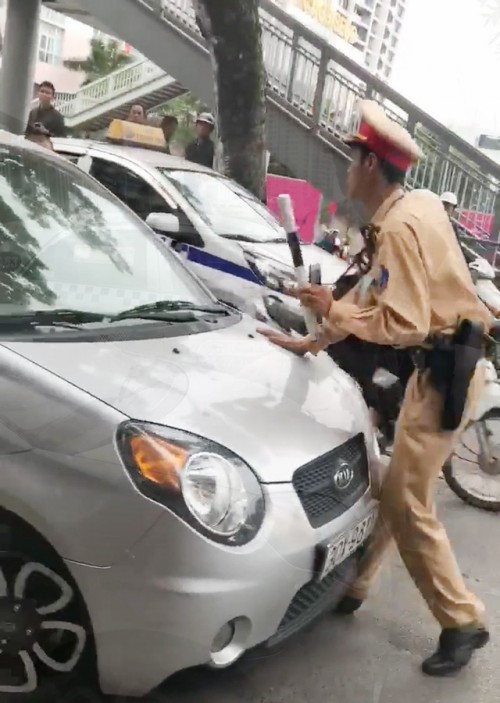 This car driver ignored the police officer’s motion for a traffic stop and purposefully drove forward while the officer was still in the way
Image credit: kinhtedothi

These weapons are only used by traffic police officers when dealing with heightened threats from aggressive commuters.

6. Traffic police officers can disguise themselves as civilians to enforce traffic laws 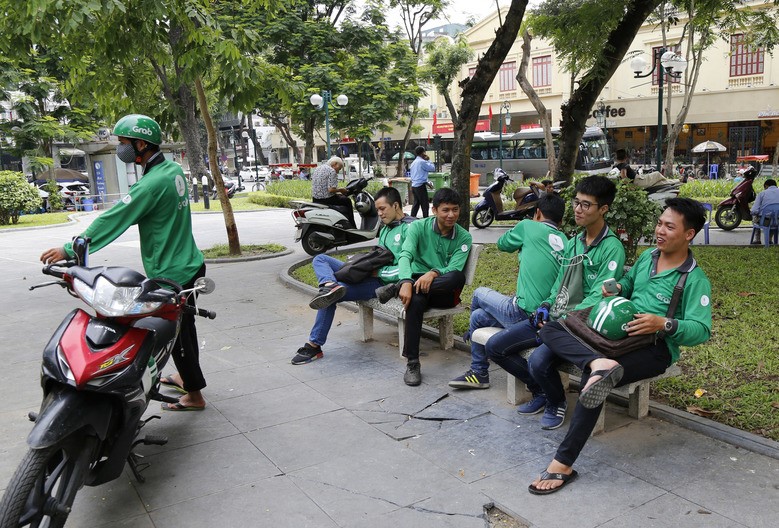 Some Grab drivers in Vietnam are undercover cops
Image credit: The Seattle Times

Traffic police officers can disguise themselves as civilians to enforce traffic laws and keep traffic in order by observing the movements of a target to detect traffic violations, and then notifying another task force who are wearing uniforms. However, their disguise plans have to be approved beforehand by their management.

One of the most commonly asked questions by both local and foreign commuters in Vietnam is whether it’s okay under Vietnam traffic rules for traffic police officers to disguise themselves to measure vehicles’ speed or to observe commuters from a distance to check that they are following the rules of the road. The answer is yes, they can.

7. You have the right to defend yourself against a traffic ticket 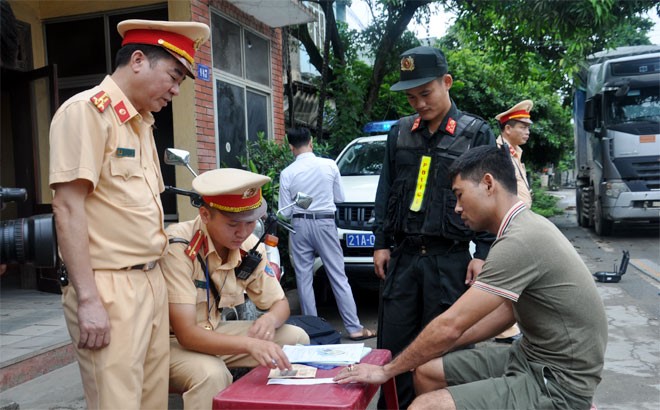 When you’re pulled over by a traffic police officer, cooperate with him and defend yourself against the traffic ticket in a civil manner. If you feel that the charges are unreasonable, you can choose not to sign it and argue your case with evidence, such as with a dash-cam video or with a witness.

Do not use unreasonable force with a traffic police officer, which can make you end up with more charges.

8. Only traffic police in vehicles with patrol signage can pull you over 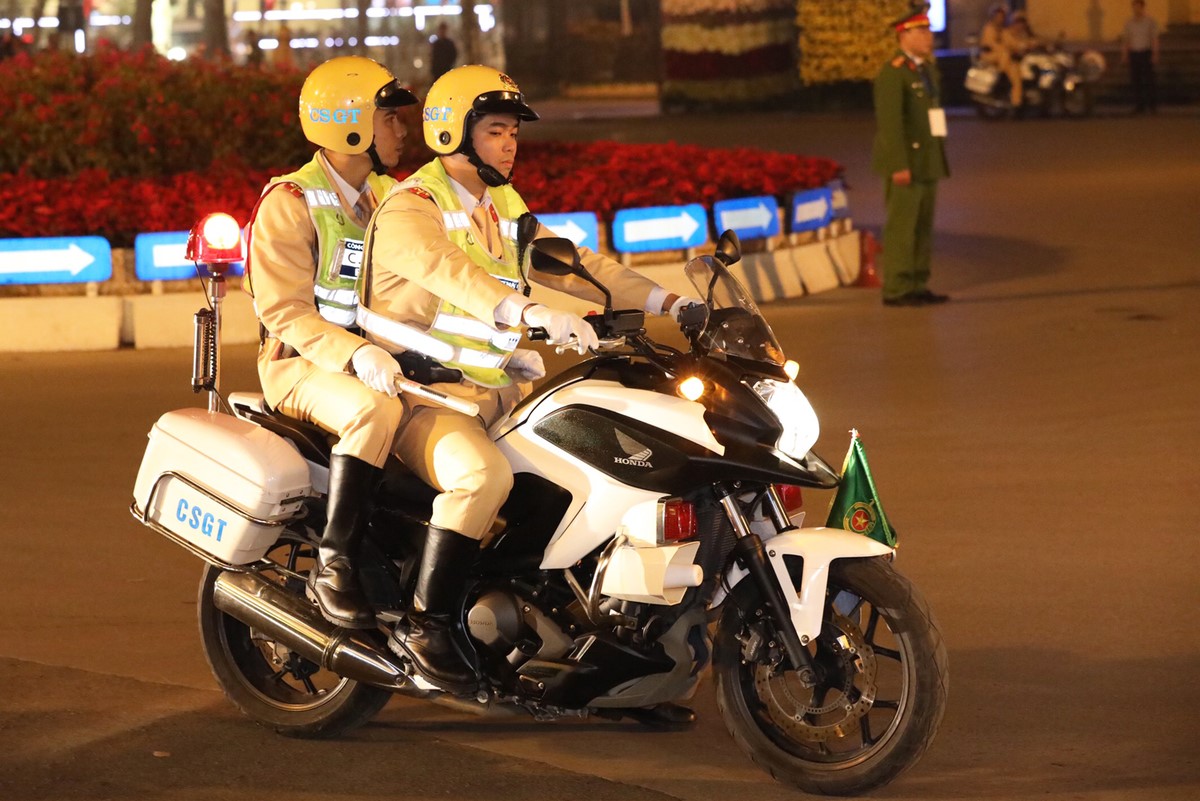 To tell whether you’re being pulled over by real traffic police officers, check the color of their vehicles, which should be white and on which are printed with signs that say “Traffic Police” in English and also in Vietnamese, as CSGT (Cảnh sát giao thông). Genuine traffic police vehicles should also bear traffic police flags and badges.

9. Traffic police officers have to bow and say thank you when pulling you over 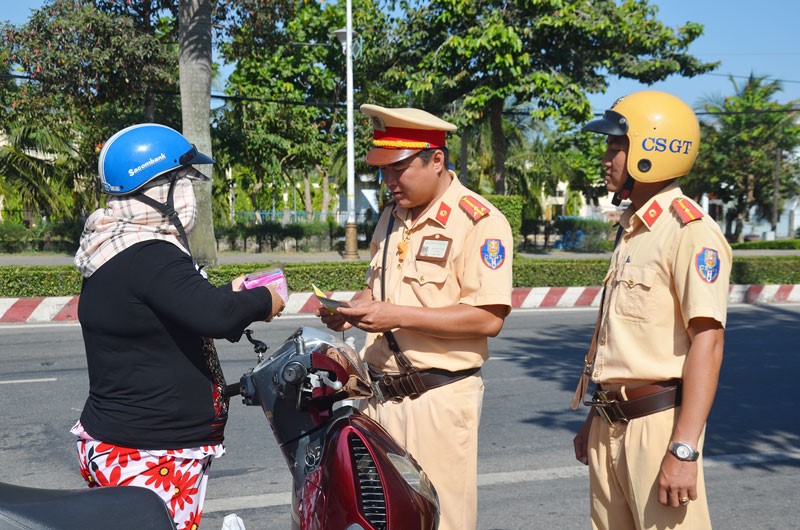 According to Circular 65/2020/TT-BCA’s Vietnam traffic rules, traffic police officers are obliged to bow and say hello and thank you when pulling a commuter over in order to show their goodwill.

You have every right to question them if they don’t follow this protocol when pulling you over.

10. Traffic police officers have to wear police labels and high-visibility reflective vests when engaged in road policing in the evening 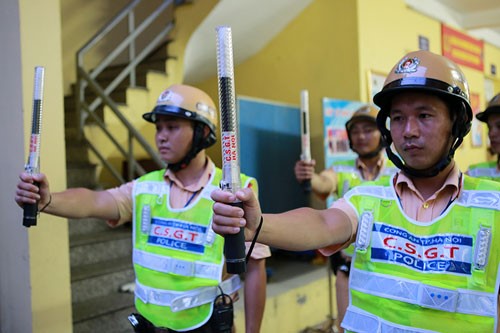 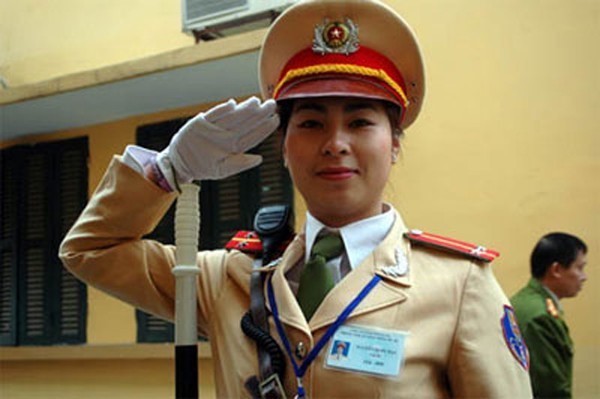 Every traffic police officer on duty must wear a police card proving their identity and title
Image credit: danhgiaxe.com

When you’re pulled over by traffic police officers who do not wear either of the above-mentioned items, you can ask them to prove their identity and authority before presenting any of your own personal documents as per their request. 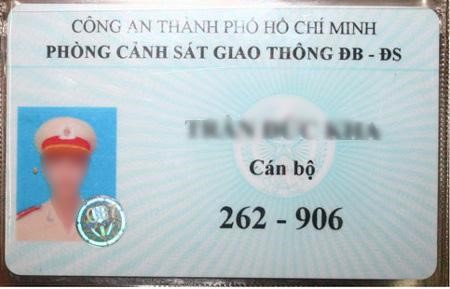 A police card must include a profile photo, name, rank, and serial number of the police officer
Image adapted from: 24h.com.vn

11. Police can prosecute you based on social media evidence 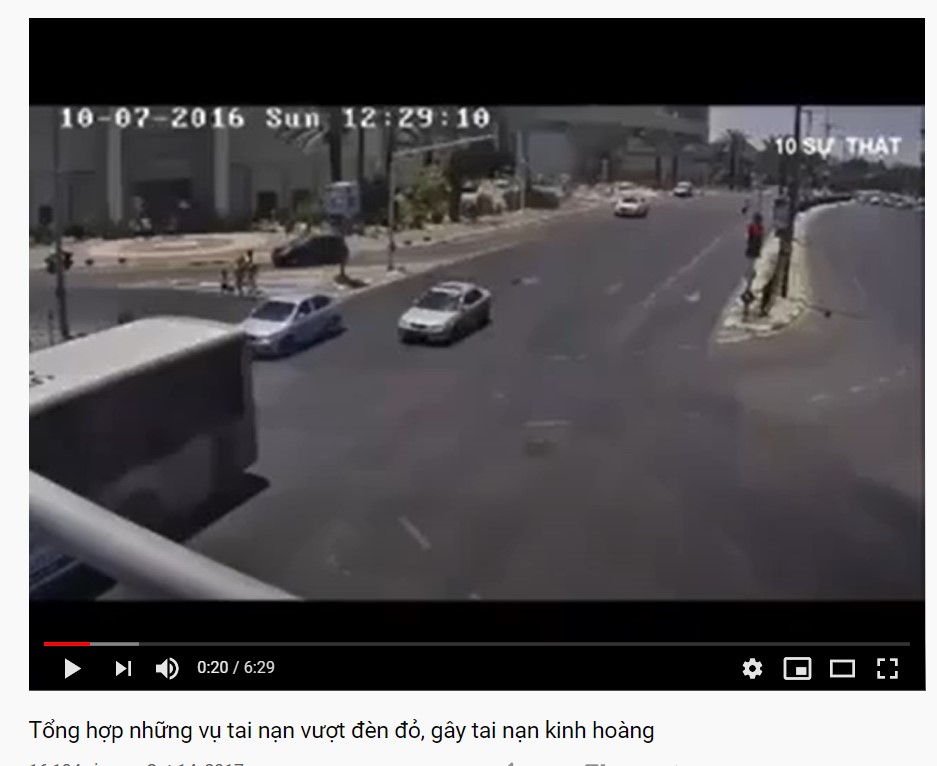 According to Circular 65/2012/TT-BCA, which will take effect on 5th August, the police have the rights to investigate, verify, and prosecute commuters based on photos or videos shared on Facebook, Zalo, Youtube, or on anonymous tips.

This means that if you were captured on a video clip or a photo running the red light, which later was shared on social media and caught the attention of the police, you should get ready to face the music.

In such a situation, the policemen in charge of the locality where you were found committing the violations would investigate your identity and come knocking on your door in no time. So better be safe than sorry – drive carefully even if no cops are around, for yourself and for your fellow drivers.

This means that instead of going to the Vietnam State Treasury offices and getting into the queues to pay traffic penalties, commuters can now pay the penalties from home.

This change in administrative procedure helps commuters save time and energy, as well as to enhance the government’s transparency in handling traffic violations. 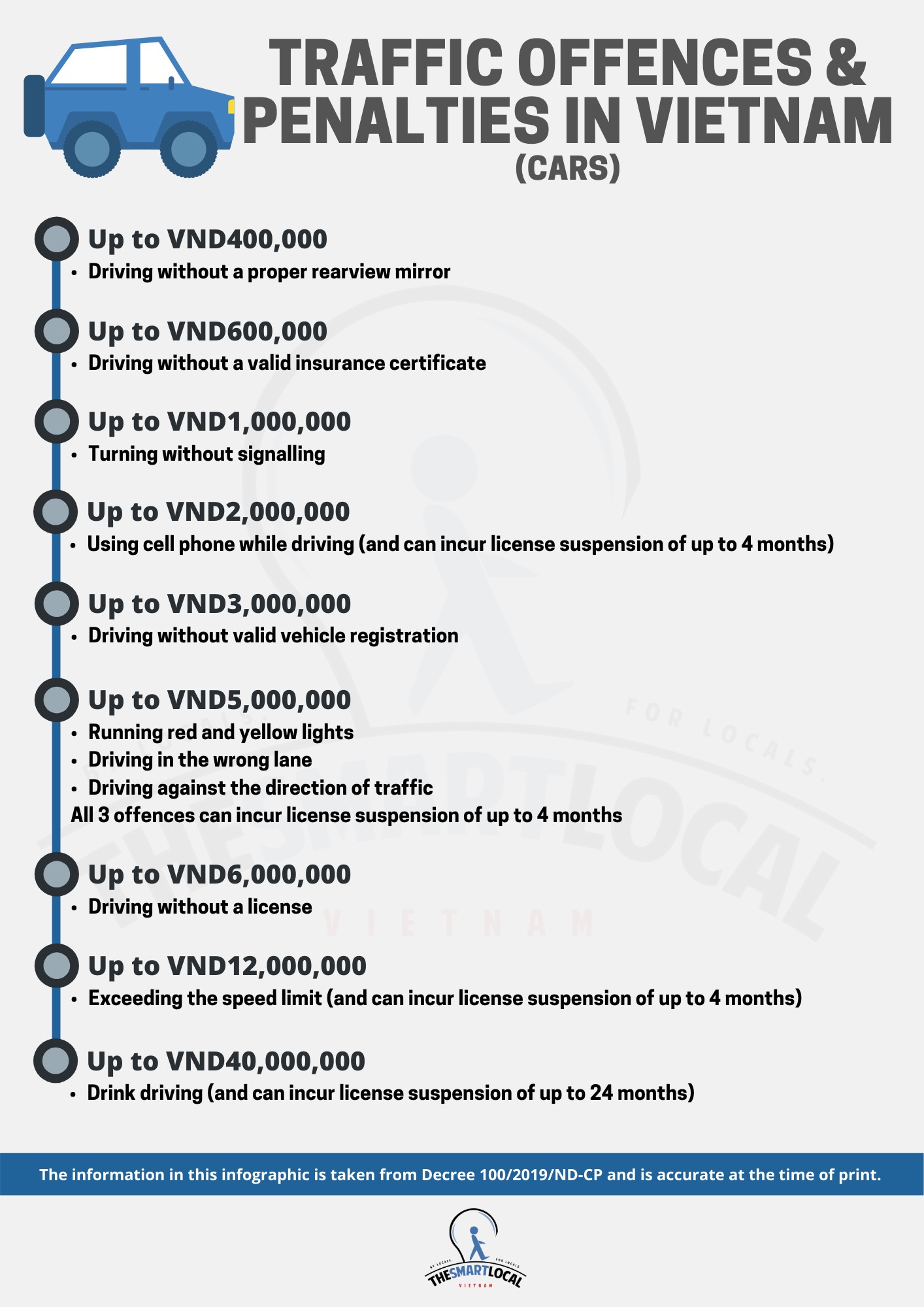 Vietnam is one of the most populous countries in the world, and home to an immensely high number of vehicles. Accidents happen every day, and traffic violations are aplenty.

Whether you knowingly or unknowingly commit a traffic violation and are pulled over, it’s good to know the traffic rules in Vietnam, your rights, and the legal proceedings here so that you can confidently hit the road. 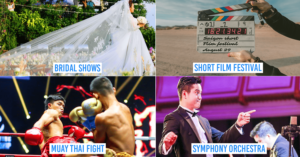 13 Things To Do In Saigon In August 2020, From A Bridal Show To A Short Film Festival
11 New COVID-19 Cases Found In Đà Nẵng, City Under Lockdown For Two Weeks 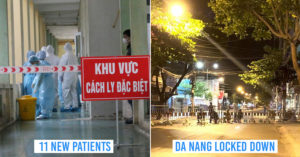