For many Singaporeans, getting around the island isn’t something we pay much attention to. Cue the multiple times I’ve taken the MRT train on auto-pilot, playing with my phone and paying only half-hearted attention to where I was going. But, not everyone views travelling around Singapore quite the same way.

For example, Fiona Tan, 32, who has a genetic condition called osteogenesis imperfecta – also known as brittle bone disease. That means her bones can break easily from what most consider minor trauma, and she relies on a wheelchair to get around.

On a weekday evening, I followed Fiona around to get a glimpse into an alternate way of getting around. From sloping hills to people who would simply not get out of the way, I took a few hours to look at Singapore via the eyes of someone in a wheelchair. Not to mention, got educated on the little things that go into making Singapore a truly accessible, inclusive city.

6PM – meeting Fiona at her workplace 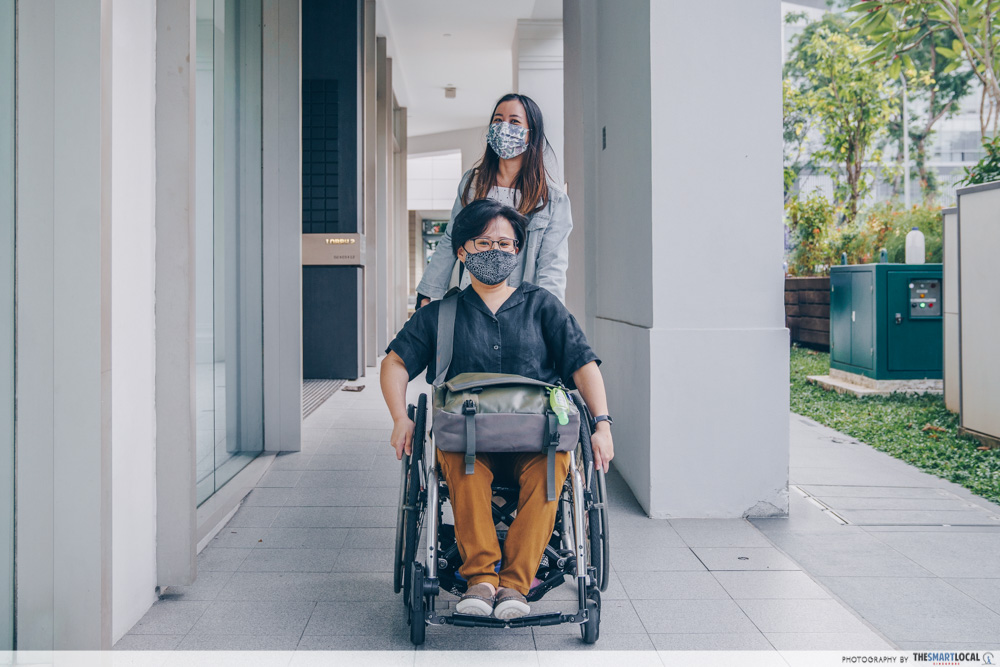 When I waited for Fiona at her workplace, I was struck by the hill slopes of the area. Wouldn’t this be dangerous for someone who could fall and get a nasty fracture? Fiona told me that even trying to grab a metal bar in her office caused her a fracture that took two months to heal. “I’ve even told my parents that there will be a quota of fractures I’d suffer in a year,” she laughed, almost casually.

But that hasn’t stopped her from the pursuit of independence. When I met up with her, she was full of cheer and navigated around in her wheelchair like a ninja. My photographer and I even stopped to catch our breath at the pace that she was going. Weirdly-angled slopes? Just roll backwards. Steep inclines? Just gather some speed. I felt like I was watching a pro sportswoman.

However, our first mini obstacle was just minutes outside the National Archives. It was a traffic junction where the slope leading to the road was pretty steep, pushing the wheelchair to the road if Fiona had not turned it on its side for more friction. 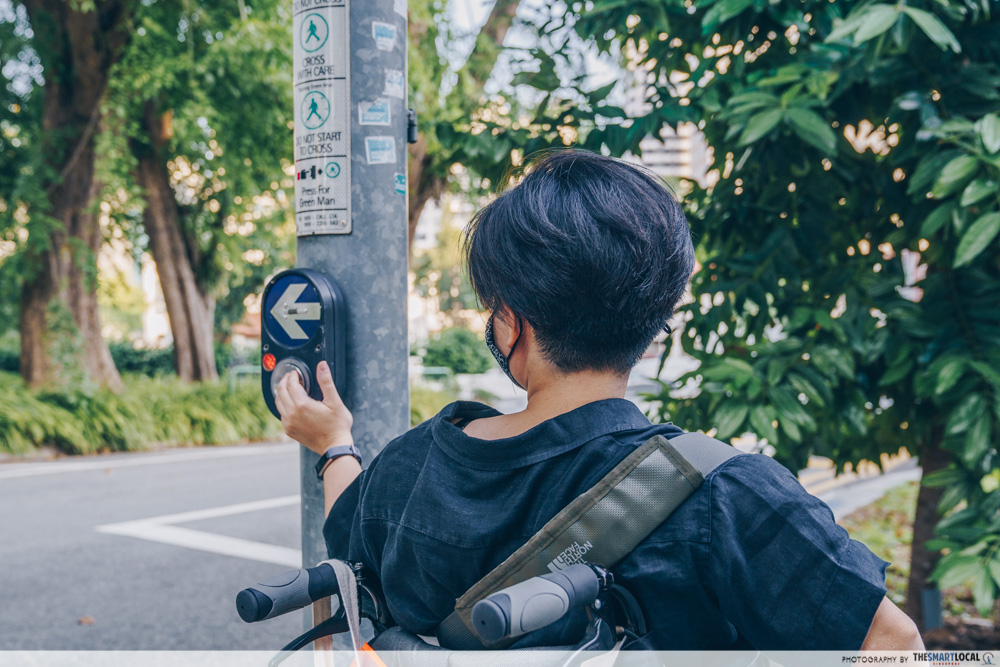 “I appreciate the height of the traffic buttons – Singapore is pretty good with that – the only thing is that it’s hard to come to a complete stop here, and might be dangerous considering that the road could have oncoming vehicles,” Fiona said. 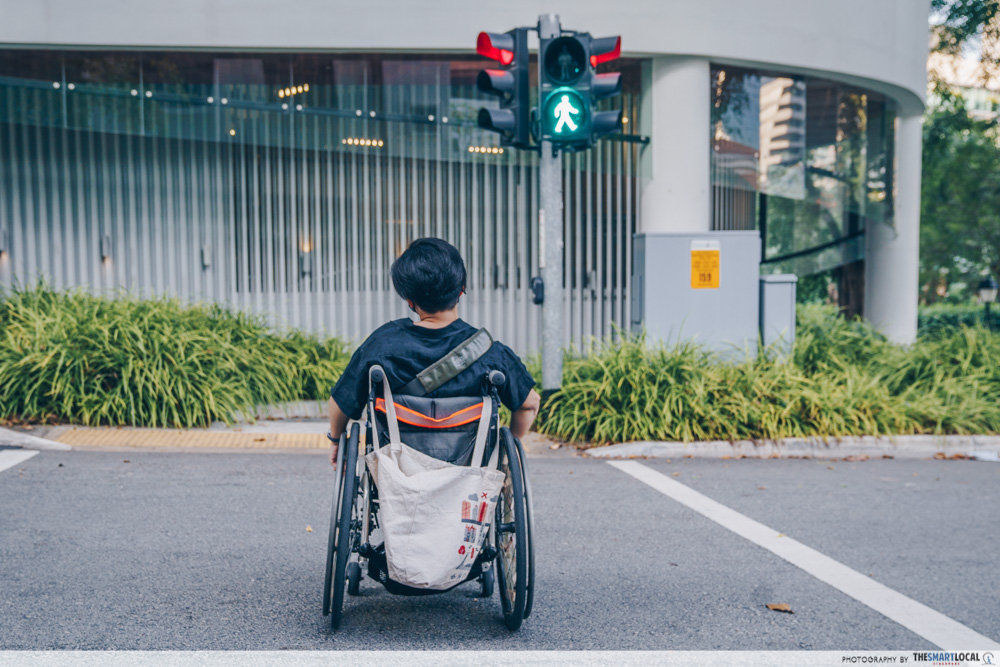 Fiona explained that the raised yellow bumps at the junction were to help the visually impaired.

Thankfully, we crossed the junction in one piece and went our merry way to the bus stop at Saint Andrews. En route, I asked Fiona if this was her usual after-work routine. She nodded, but added that for new places, she uses Google Maps to “QC” and see if they are wheelchair-accessible.

“I plan my routes with the little dropped men,” she states, “also, you’ll be surprised at how many overseas hotels say they are wheelchair-accessible but are not very in reality. So, you have to do your own detective work via Maps.”

“Yes, travel – when it was still possible – is a very well-planned once-a-year affair. Like I have been to Seoul and all that.” But no spontaneous freewheeling adventures? “No, not possible,” she laughed.

After catching our breath, we could finally take a pause at the bus stop. As the creaky buses rolled in, I decided to dig deep before we were onto our next leg. 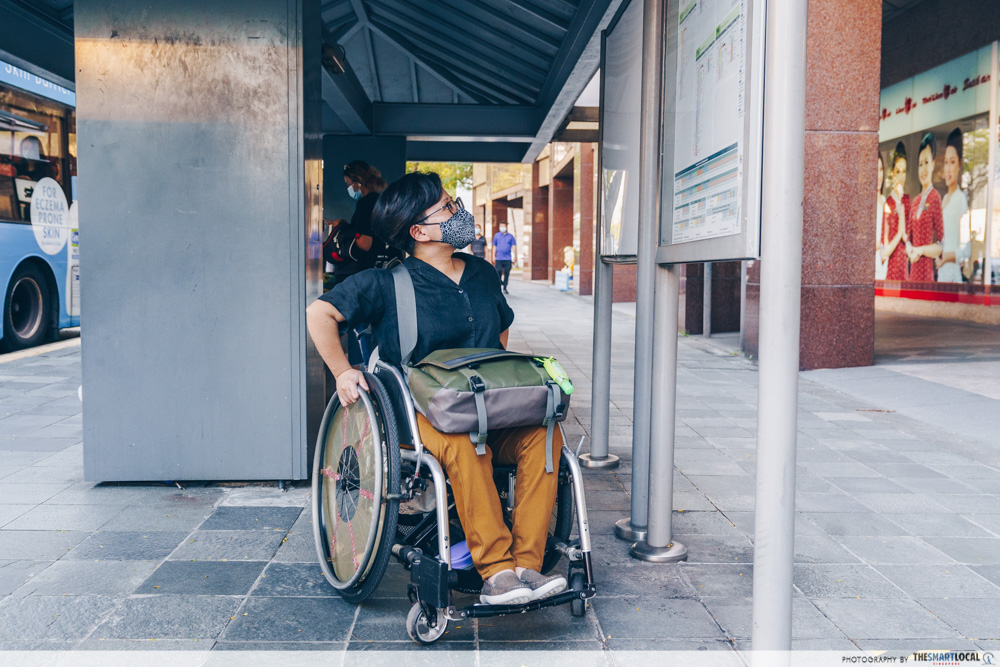 “Don’t mind me asking – but do you need to rely on caregivers often for your condition?”

“To be honest, I did have hired caregivers who would accompany me around previously. But nowadays, I try to get around alone as much as possible.”

She explained that she is mostly active – except during fractures when she truly needs a helper, who’s usually a domestic worker. Otherwise, her parents try to fetch her to places as much as possible.

“I prefer to be independent in the pockets of time between episodes,” she says. “And most of my colleagues or friends also help me around if need be.”

Indeed, I witnessed first-hand how helpful Singaporeans could be if given the chance. While I’ve faintly noticed in the past how bus drivers went to the back door to open up the ramp and assist wheelchair users aboard, this particular driver went the extra mile when disembarking. 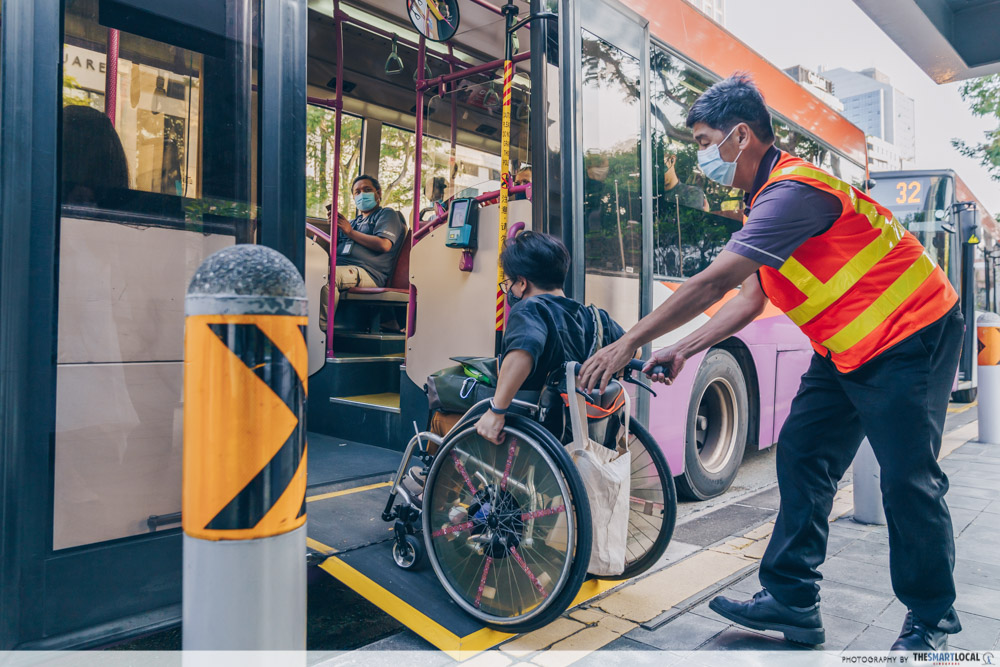 He even removed a dustbin on the kerb to give Fiona ease of passage at the crowded Bugis Street area. 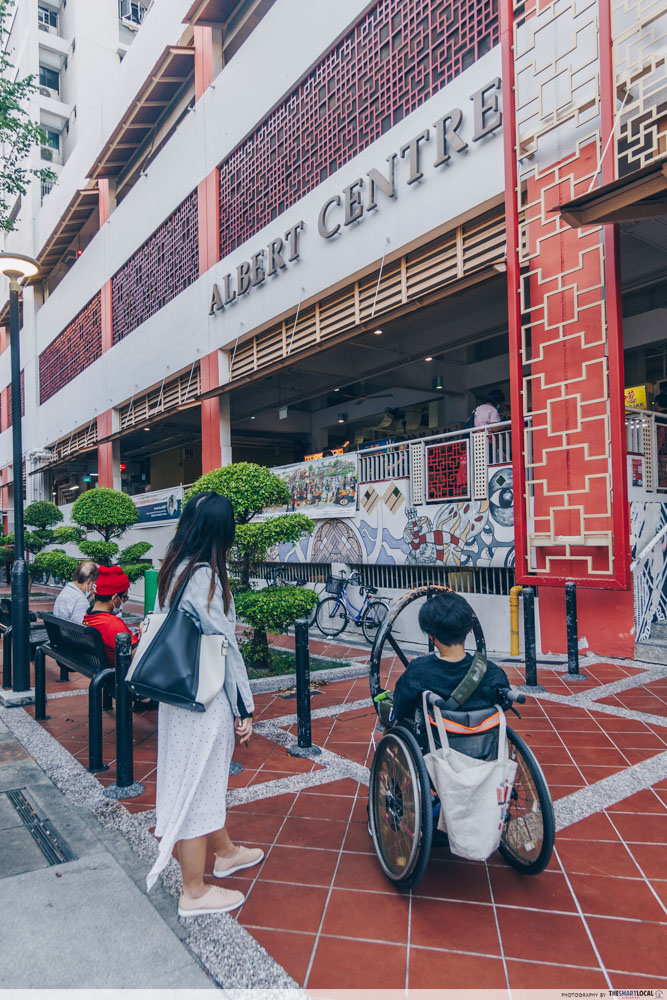 Upon first look at Albert Market & Food Centre, I was initially dismayed and concerned at the flight of steps that greeted us. “Do all hawker centers have ramps nowadays?” I wondered aloud. “Yes, actually most do after being upgraded – it’s just a matter of going around the building to find a ramp,” Fiona replied. 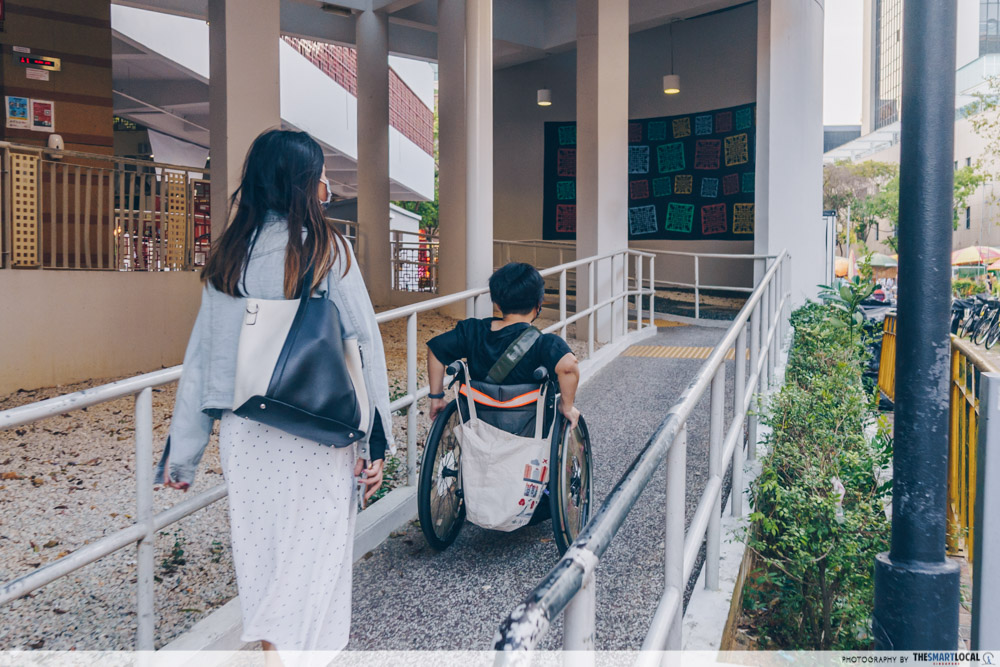 Thankfully, we didn’t take that long to find the ramp. However, it did take a while for us to find seats at the hawker centre. That was due to the added challenge of finding tables which had empty spaces for a wheelchair to be parked.

Fiona explained that these were mostly found on the outskirts of the hawker centre but are rare, and so it takes time for her to find a table to sit. 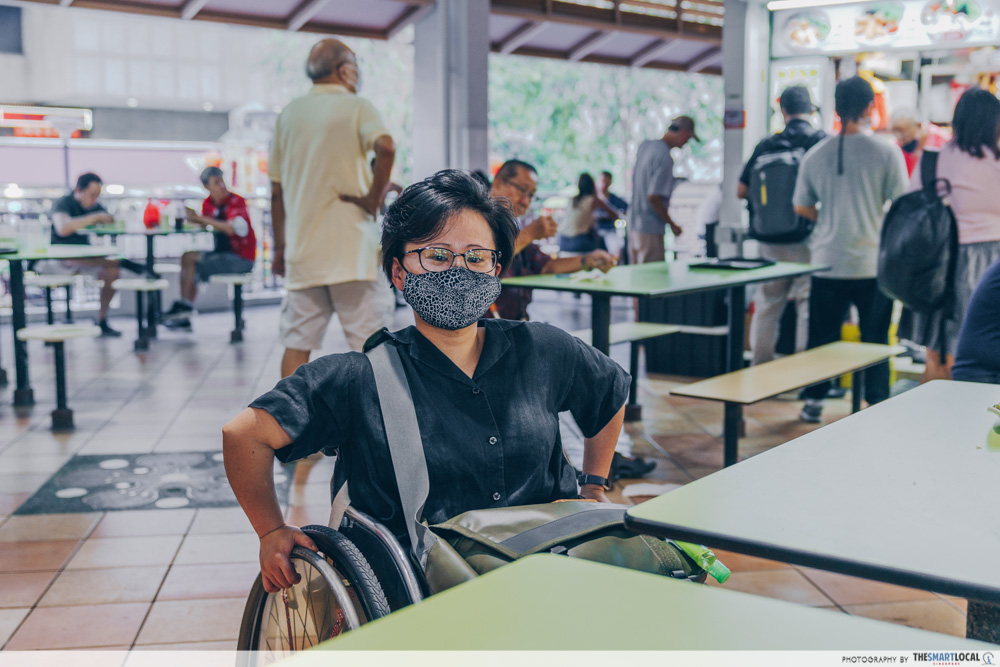 All that chatting had left us rather thirsty, so we made a beeline to the nearest drink stall.

When we were collecting our drink, Fiona showed us a rather neat add-on to her wheelchair. There was a Transformers moment as she revealed an extension similar to the cup holders you find in cinemas to put a drink. 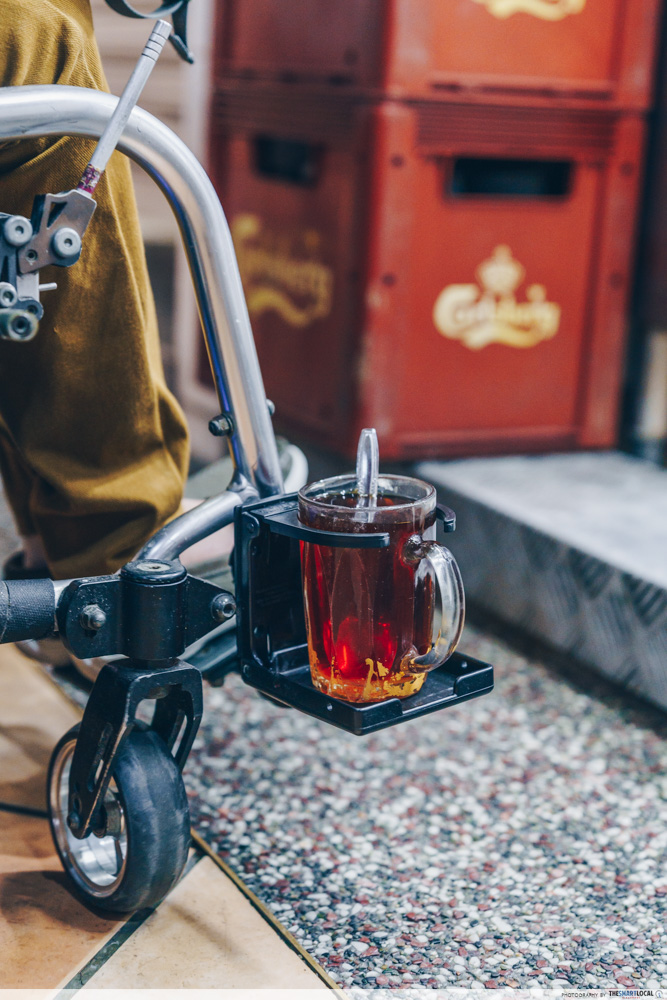 With surprisingly little spillage, we made it to the table and started chatting about everything from workplace accommodations to how she rolls about in the rain (raincoats, since she doesn’t have an umbrella extension just yet).

Wheelchair-friendly and universal design in Singapore

We also got talking about the Covid-19 situation. One particular self check-in scanner was simply too high to measure her wheelchair height, and no human was around to facilitate that. Other than that, though, she applauded newer regulations to ensure buildings are more accessible, like bigger toilets and wider entrances.

We acknowledged that Singapore was one of the most accessible cities in the world when compared to other countries. However, we could still improve small details according to the principles of Universal Design. 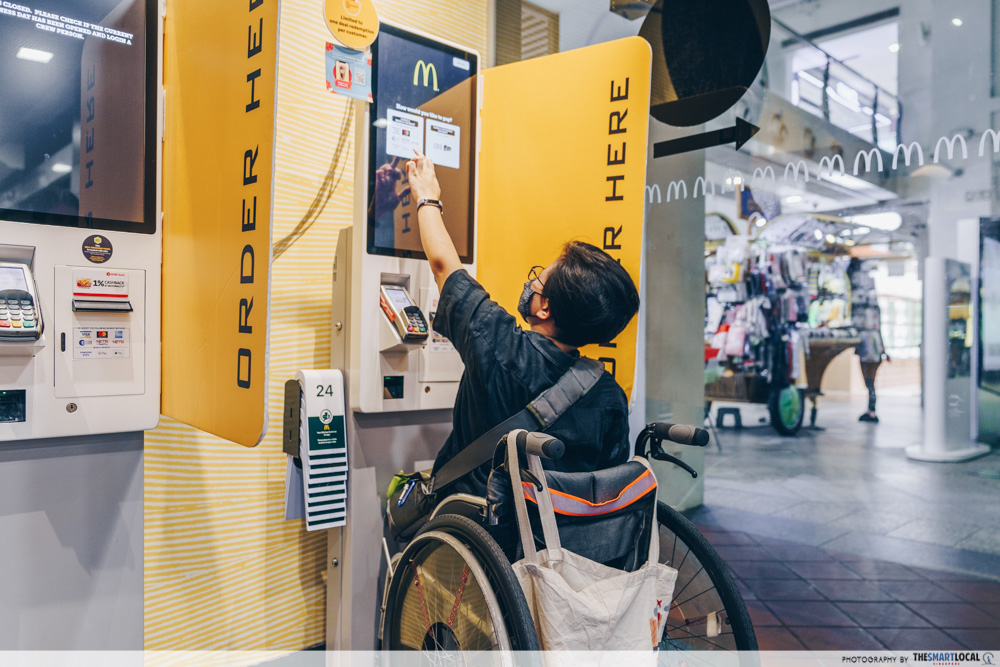 For instance, at the ubiquitous McDonald’s. She pointed out that the touchscreen panel made it tough to order the top row of items simply because the user interface did not allow you to scroll down “I couldn’t ever get a Filet-O-Fish meal, ok!” she laughs.

Update: McDonald’s has since implemented a “Reach Mode” for greater accessibility.

How we can do our bit for a more inclusive, accessible Singapore

When it comes to the question of how accessible Singapore really is, it goes deeper than merely building suitable infrastructure for PWDs. It is also a mental shift towards achieving a universal design for everyone – after all, the line between PWDs and the able-bodied is a lot more fluid, like folks who get injured, age or gain disabilities in their later years.

To that end, it was an eye-opening journey around Singapore with Fiona to uncover the little things that do matter. With that little glimpse, I realised that it was not just up to decision makers to enact suitable changes. It can start from anyone. We just simply need to practice more empathy and awareness when it comes to alternate ways of viewing the world.

If you’d like to learn more about accessibility or other vulnerable groups in Singapore, check out the following resources or related articles: 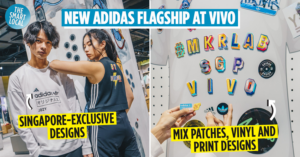 You Can Now Customise Your Adidas Clothes For The First Time In SG At The New VivoCity Flagship
8 Tips On How To DIY Your BTO Renovation, As Shared By Millennials Who've Been... 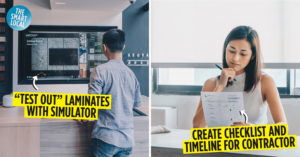