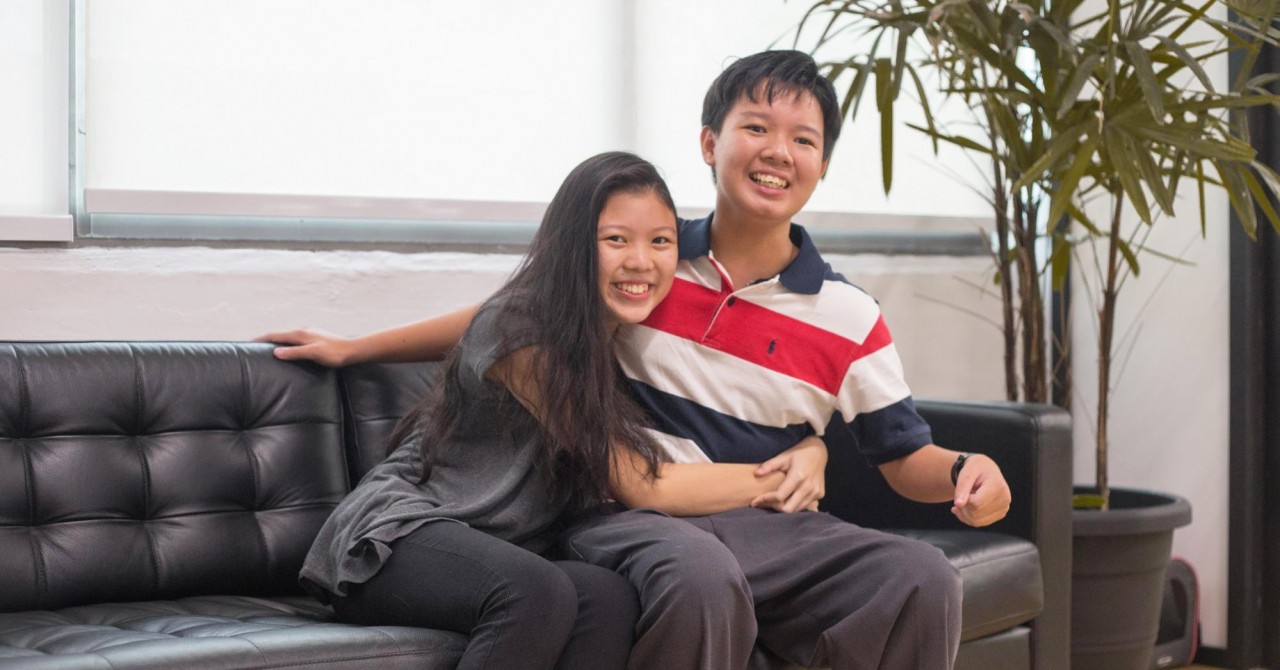 I once had a classmate with Asperger’s Syndrome, and I made the effort to reach out to her in class, whenever she needed help. After school, however, I never made the initiative to truly connect with her. We’ve since graduated and parted ways.

Till today, I wonder. What was it that stopped me from going the extra mile and befriending her? Maybe it was fear. Or maybe it was overthinking, but I know that I’m not the only one who has been in this situation.

So when the National Council of Social Service (NCSS) gave me an opportunity to interview members of the disabled community in Singapore for the #SeeTheTrueMe campaign, I dived right in, keen on discovering perhaps not just more about them, but a little about myself as well.

Each of the interviewees came with a loved one, and I had a glimpse of our world through their eyes, taking away more than I had hoped to achieve.

Jia Yi, 27 | “If all of us were to form barriers in our heads, we’ll never have the courage to make friends” 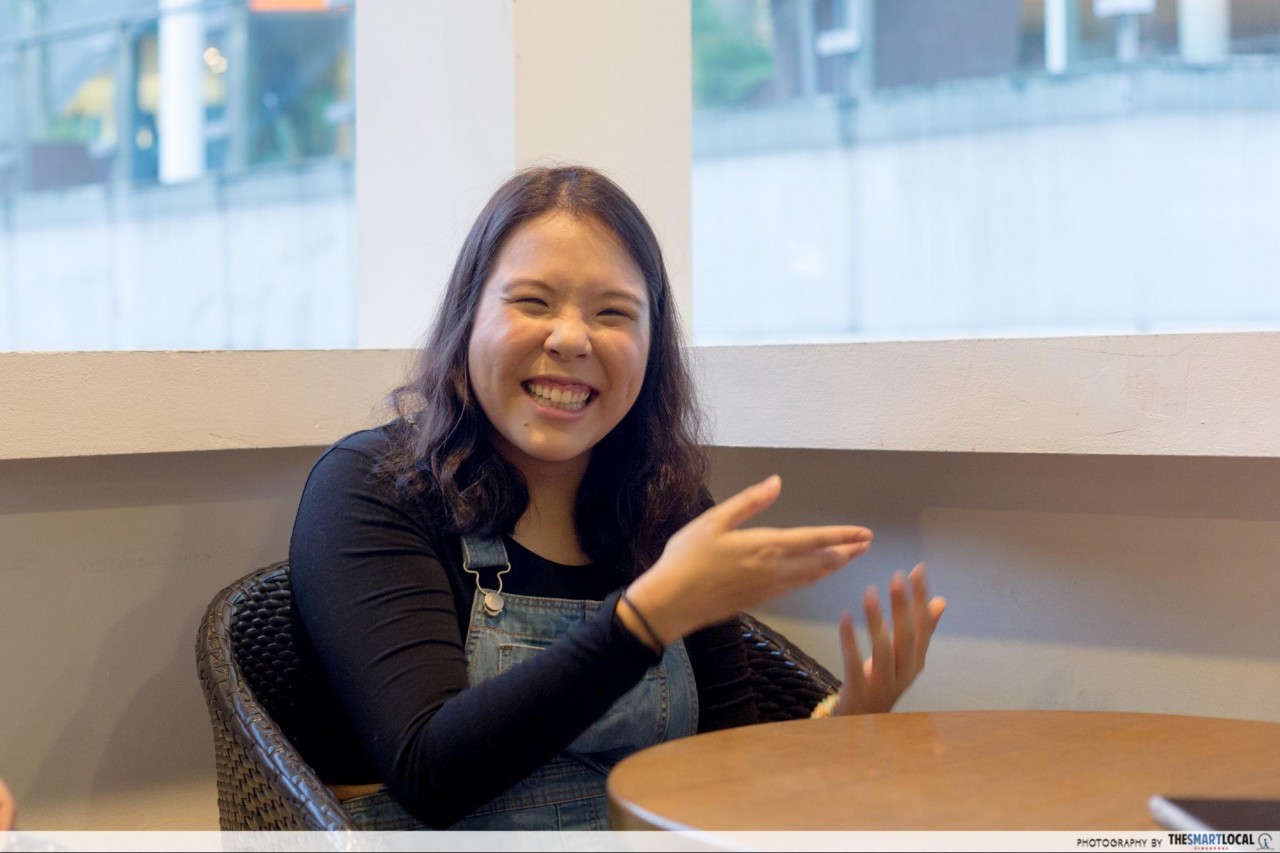 Jia Yi, who is hard of hearing

“I didn’t have much friends back then, most of them were “hi-bye”, and I regretted it. During my younger days, I felt like I was a burden to everyone, and that they were unapproachable. I thought to myself, why would anyone want to go through the trouble of communicating with a Deaf person like me?

But now, I know that I’m wrong. When I first met Stephanie in a Deaf outreach camp, she wasn’t proficient in sign language, and there was a lot we couldn’t understand. But even after the event, she continued texting me, asking me to coach her in sign language.

Soon, she encouraged me to go out for outings. I was hesitant at first, but we eventually became friends. We can talk about anything under the sky now – school, problems and even boys! 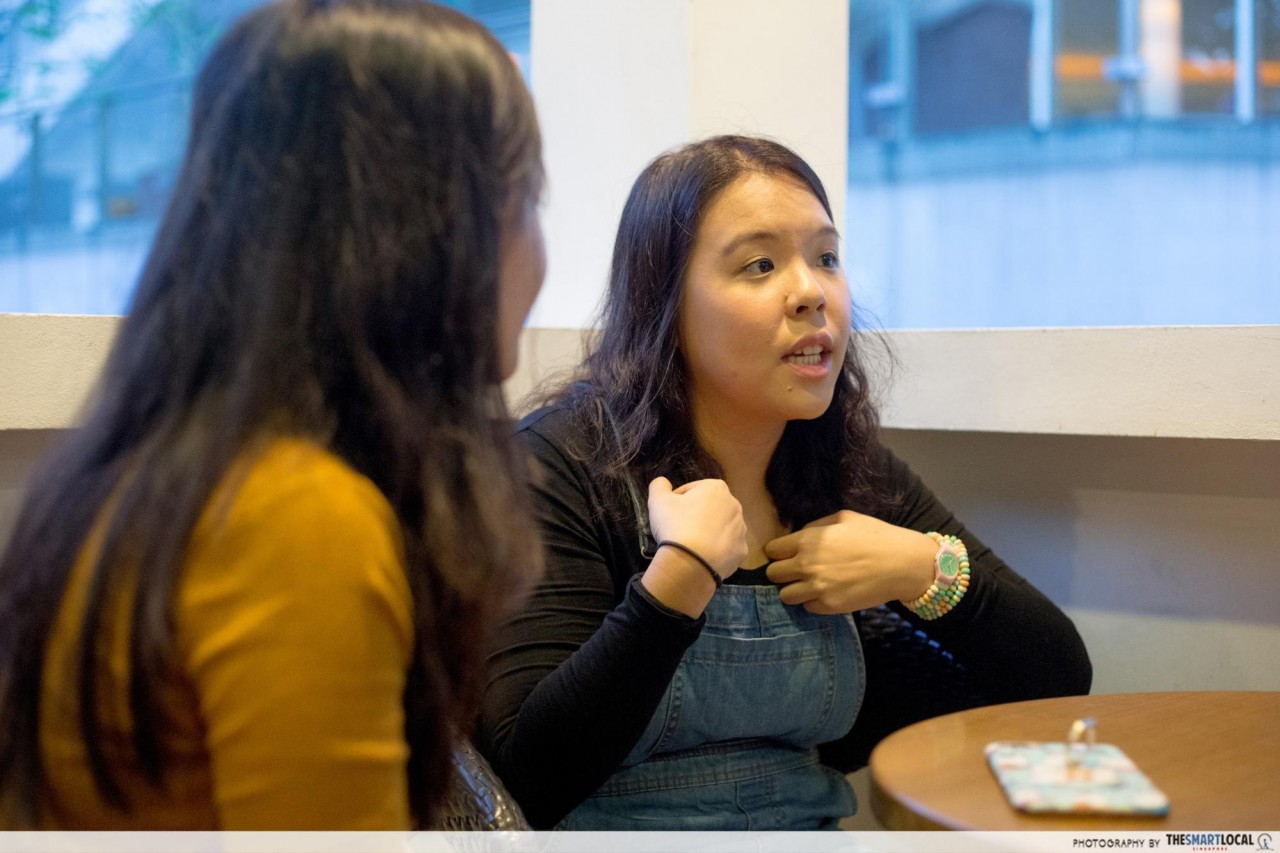 I realised that communication works both ways. If all of us were to form barriers in our heads, we’ll never have the courage to make friends. We’re all human, and we take time to open up. But if you just try a little and put in that extra effort, you’ll be opening yourself to opportunities you never known possible.”

Stephanie, Jia Yi’s friend – “She’s actually the same as everyone else” 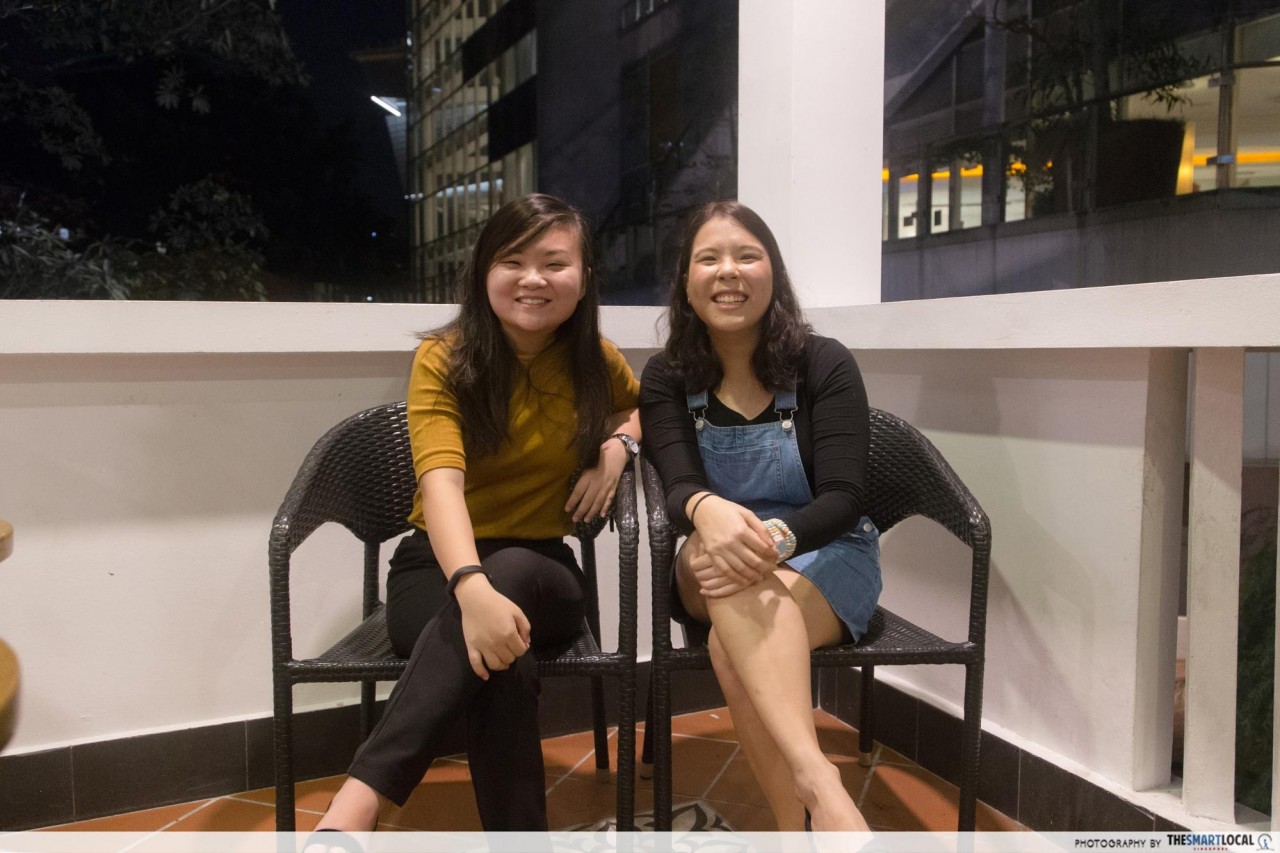 “We had to play some ice-breakers during the Deaf outreach camp, where we had to throw our shoes in a pile and have another person return it to us. Jia Yi returned mine, and her first words to me were “your feet very small hor”.

Being with Jia Yi taught me a few things. She makes me laugh all the time, and I learnt to be a happier person. She taught me to be brave too, as she never lets obstacles stop her from doing what she wants. My fondest memory of us is our outing at Adventure Cove – we sat on floats and went down the Lazy River 10 times just to wave to lifeguards on patrol!” 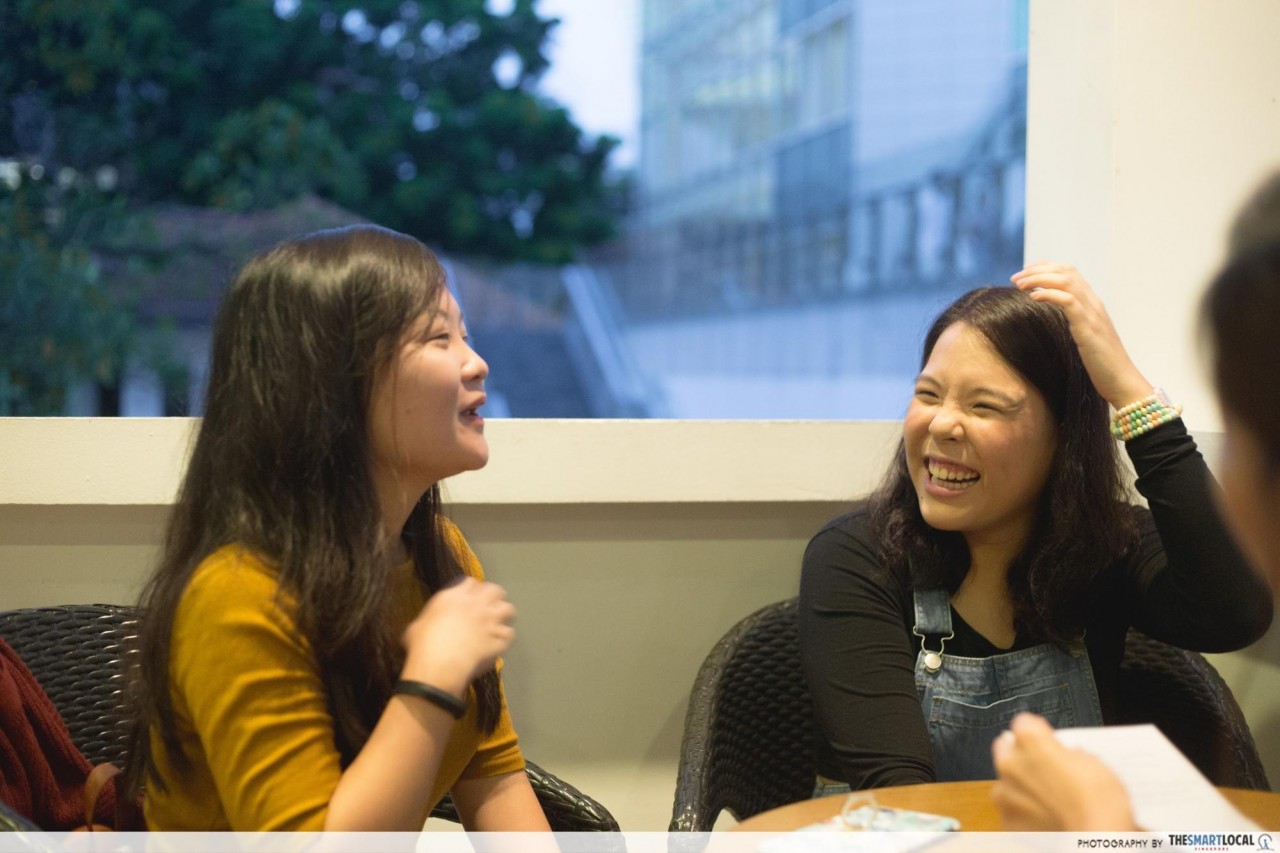 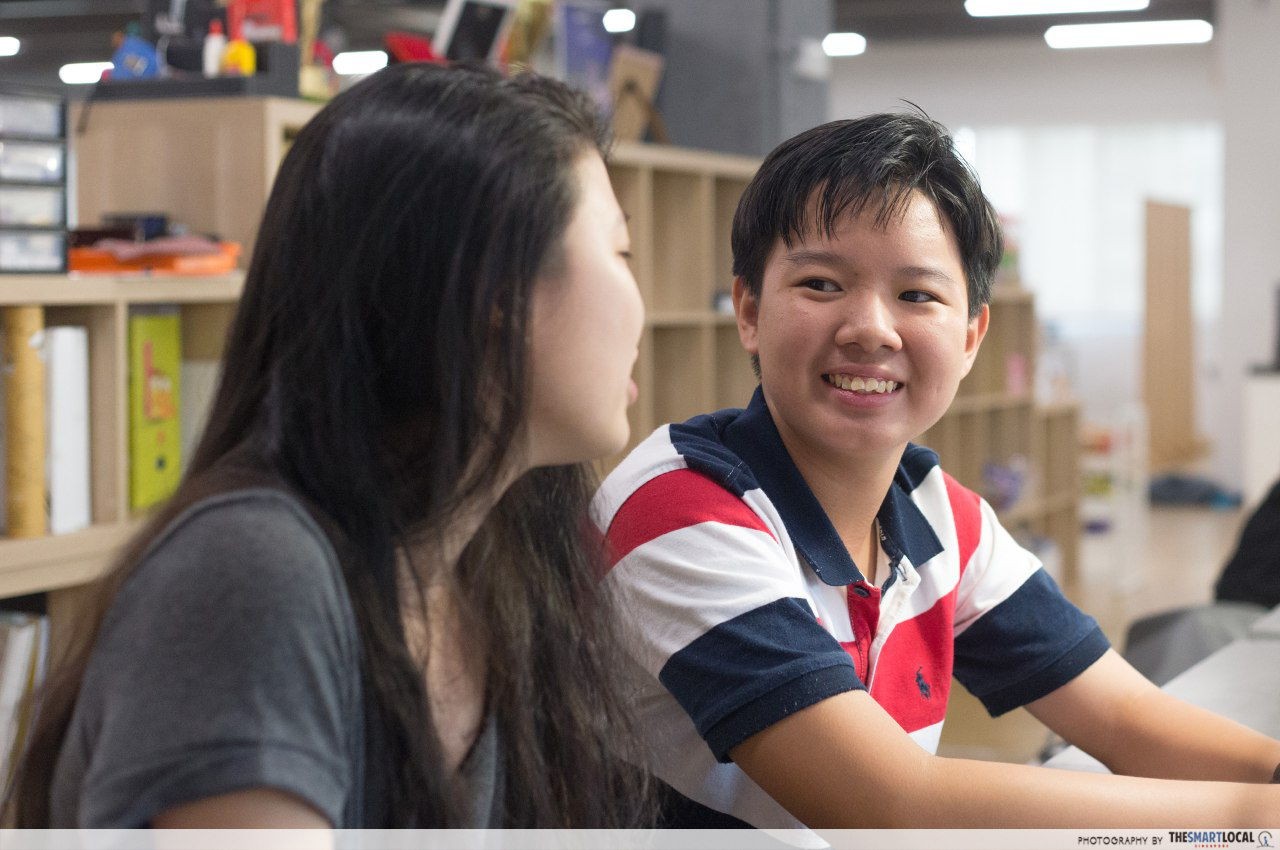 Samuel, who had a brain haemorrhage when he was young, with his sister, Sophia.

“I know that I get mood swings at times, and I’m thankful that my friends have been understanding of them. Whether schoolmates, church friends or even my family, they’re accommodating and they give me space to cool off. After that, we’re all back to being friends.

My favourite meal? It’s got to be McNuggets. Sophia and I enjoy going to McDonald’s, and every time we do, we’d take our time to scan through the entire menu – only to get McNuggets again.” 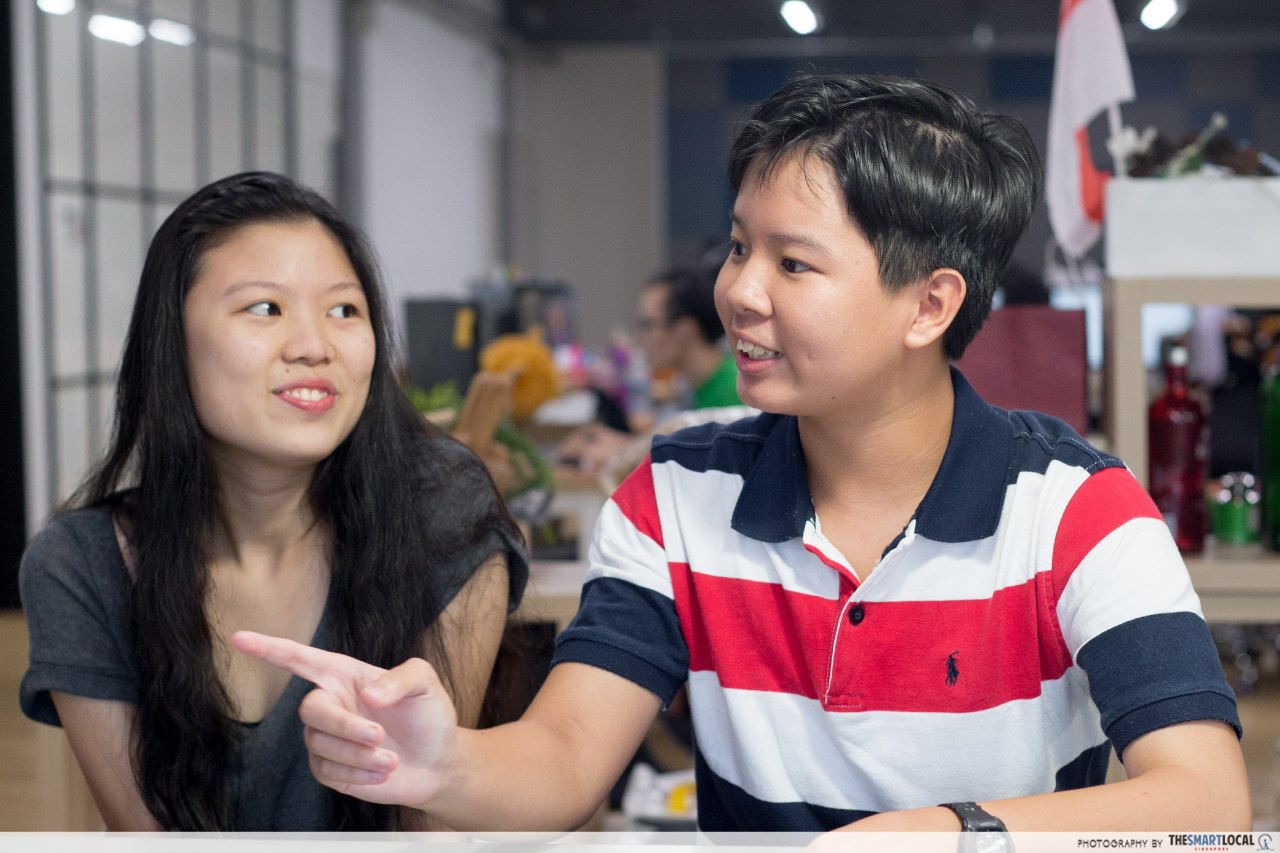 I love swimming, but we had to put that on hold after my leg operation in 2015. I was sad, but I decided to join the Desk Bells CCA. It isn’t as fun as swimming, but at least I’m learning something new.” 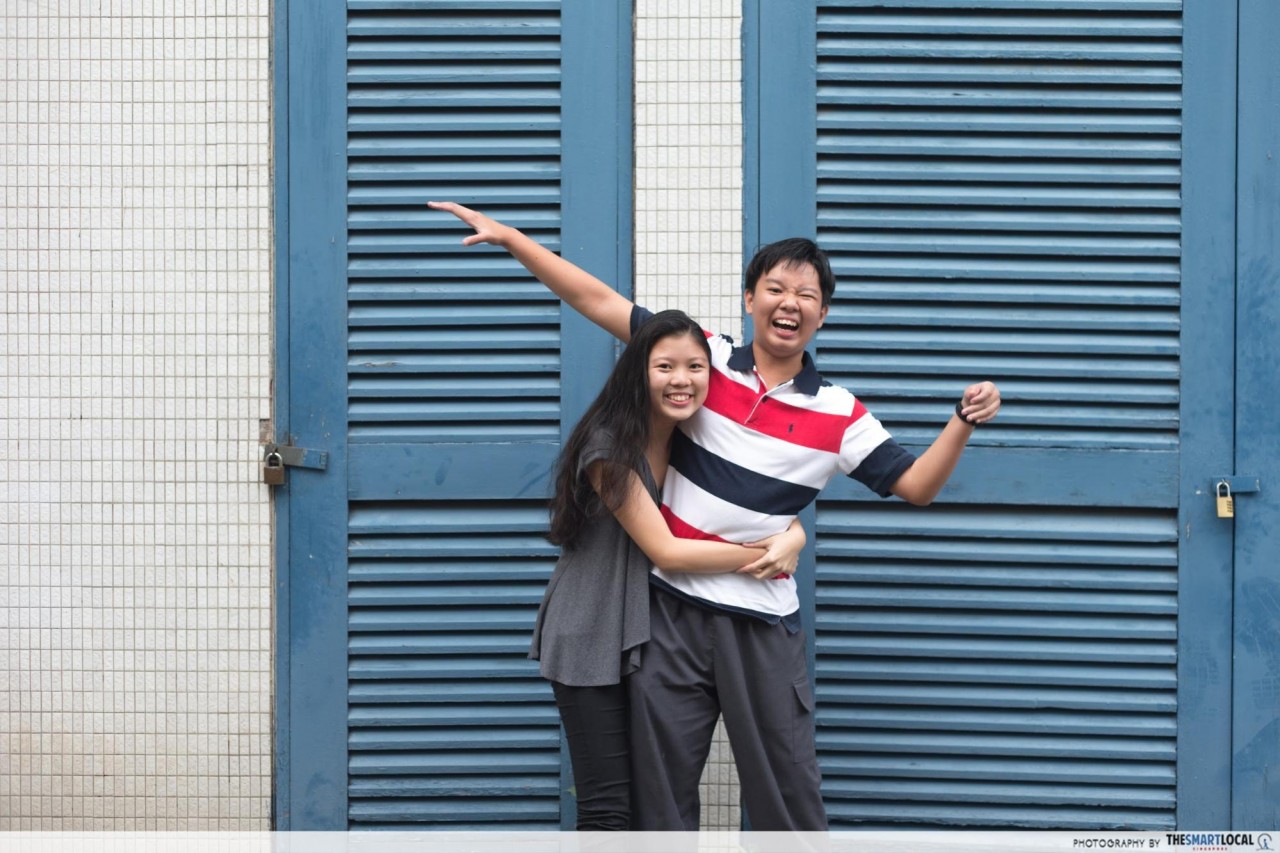 “Samuel makes joy simple. Doing household chores such as gardening and laundry make him happy, as he knows that he’s helping out. He’s even able to memorise all of our neighbours’ car plate numbers, and when they whiz by, he’d tell us excitedly that they’ve left house. 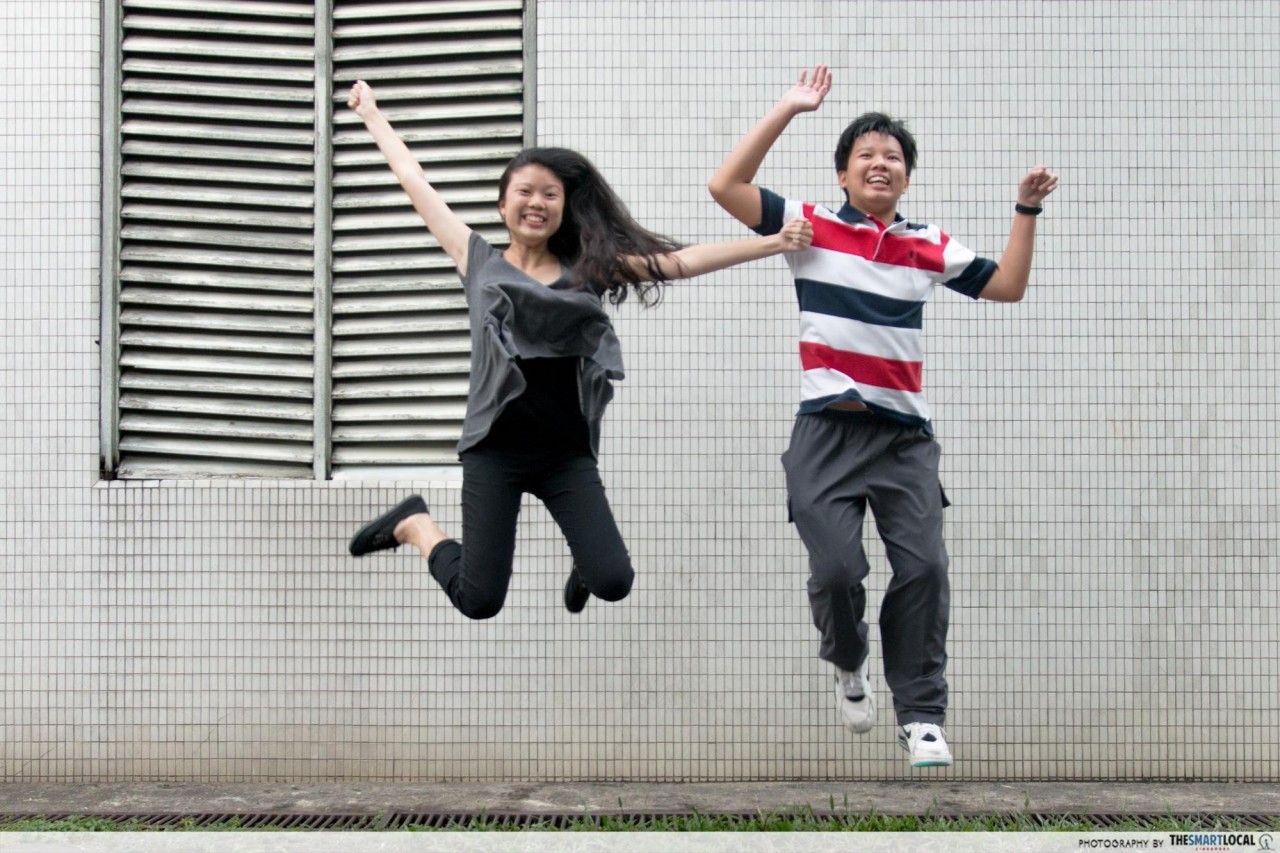 It makes me reflect on my own life. Everyone gets tired of doing the same things every day, but Samuel manages to find something to be happy about all the time. Even after waking up from his leg operation, he never sulked – he woke up asking for his favourite food, and just wanted to go out.”

Patricia, 29 | “We just learnt to carry on with our lives” 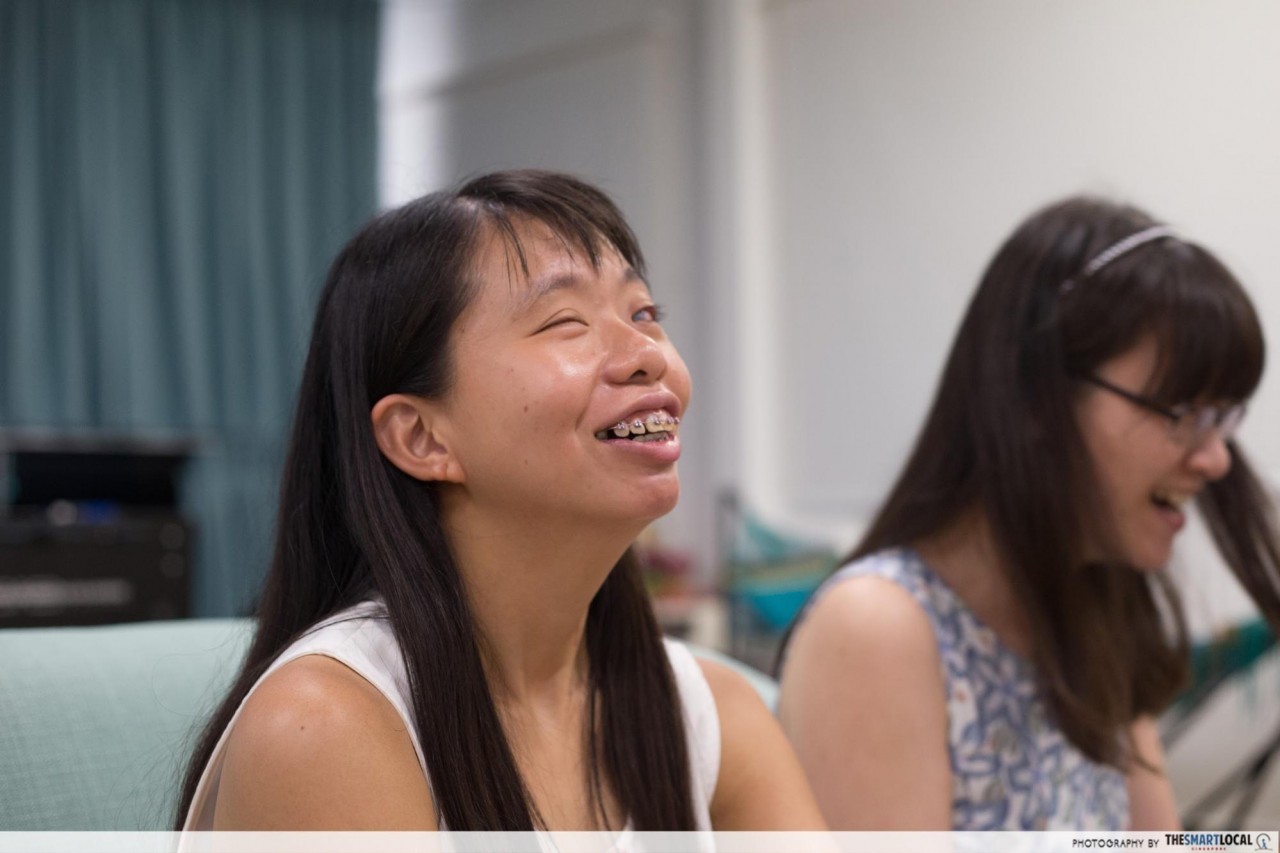 Patricia who has visual impairment, and her friend, Ying Yin

I was born with congenital sclerocornea and developed Glaucoma during my late teens, but that didn’t make a difference to the people around me. We just learnt to carry on with our lives. I then met Ying Yin through work, and from then on, we became the best of friends.

She takes care of the tiniest details. Whenever we head out, she holds my hand and clears the path for me. There are times when life is hard, but I know that I can count on her for support. I’d like to say thank you to her, but for all she’s done for me, a ‘thank you’ isn’t enough.” 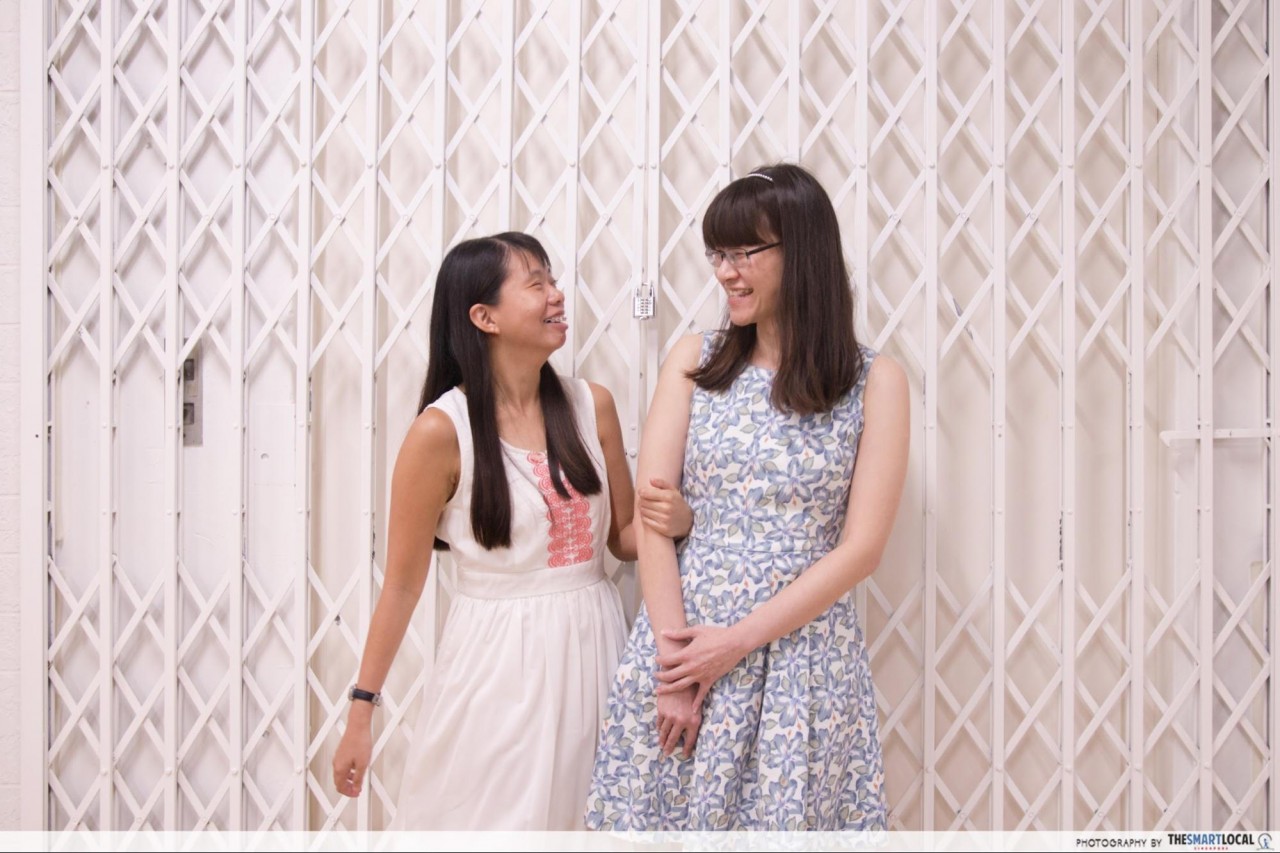 Ying Yin, Patricia’s friend – “She pushes me to try out things that I usually won’t” 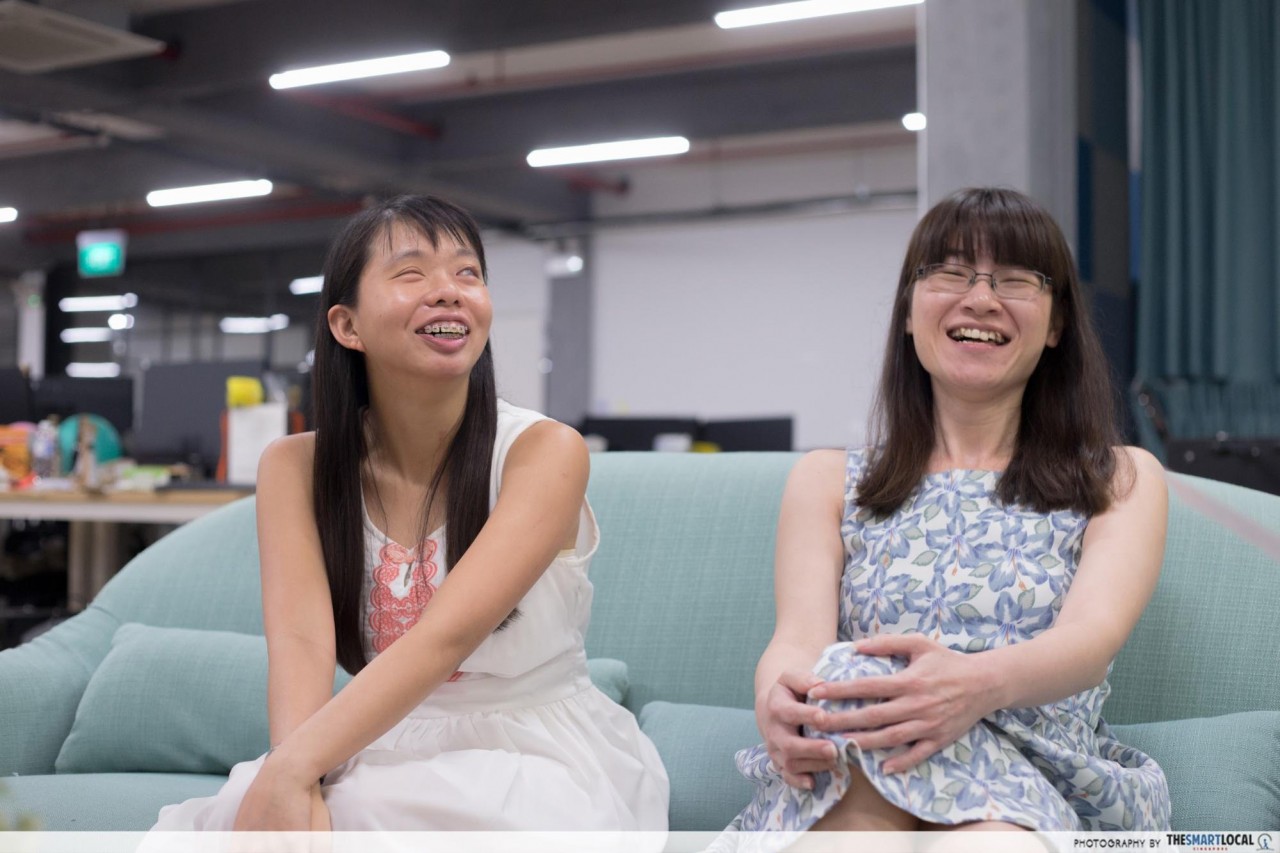 “There are terrible days at work when everyone feels down, but once Patricia walks in, it’s a different situation – she’s jovial and cheery, and she makes everyone feel good about themselves.

Sometimes, I make the silliest decisions and regret after. I’ll tell Patricia about it, and she wouldn’t be able to control her laughter – she’d burst out laughing at her desk! It’s embarrassing, but it makes me feel like I’m not alone. 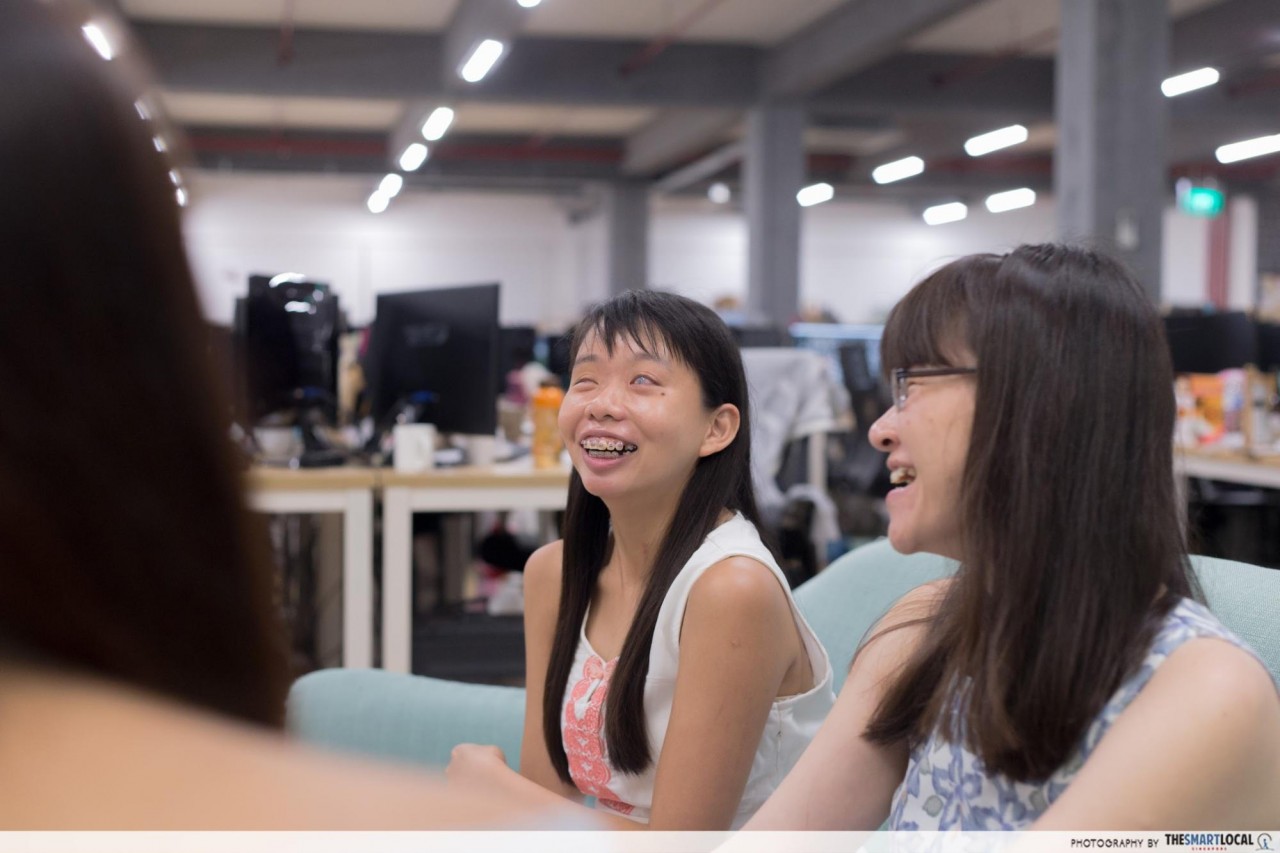 Her top three qualities? Jovial, caring and adventurous. She pushes me to try out things that I usually won’t – like this interview. The meeting place is so ulu! But I followed her anyway. I guess that’s how you build trust in a friendship, when you do crazy things with your friends.”

Race, gender, disability. These are prescribed attributes that we don’t have control over.

Through Social Studies lessons and through viral videos on social media, we’ve learned that people shouldn’t be judged based on their race or gender, yet persons with disability aren’t yet afforded that luxury.

Most of us hold the belief that people different from us can be difficult to befriend, but if anything, this interview showed that the only barriers that exist, exist in our mind. 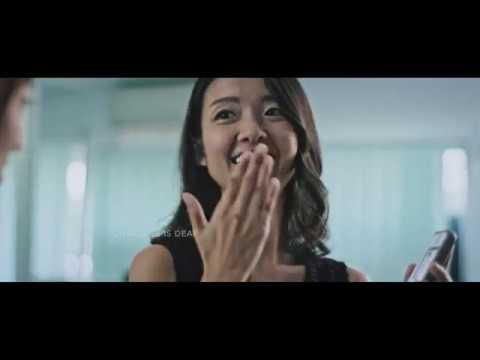 Look Beyond My Disability, See the True Me - We are not that different

Jia Yi, Samuel, and Patricia were open, willing to share, and laughed with me the way everyone else does.

The littlest of details like how Samuel looks to Sophia before bursting into laughter, Patricia’s carefree laughter while chatting with Ying Yin, and how Jia Yi playfully smacked Stephanie on her shoulder are small things everyone relates to.

NCSS’ #SeeTheTrueMe campaign shows how persons of disabilities are no different from us, and the raw moments that I captured of their kinship only further proved this.

Their disabilities don’t define them. At all.

Find out more about the #SeeTheTrueMe campaign here

This post was brought to you by National Council of Social Service. You can also watch a video series – Building Bridges, Commit to Inclusion, produced by NYP students for more stories.

New And Fun Things To Do In November 2017: Etsy Fair, Beer Yoga, And Flea Ft. Thieves Market Vendors
7 Weekday Lunch Promos at CHJIMES' Restaurants below $15 for a Fuss-free Lunch Fix