Waking up at 5am for a week

I don’t get enough sleep. In fact, I haven’t gotten a full night’s rest for as long as I can remember. I’m usually happy to clock in 5 hours, and seldom hit the hay before 4 or 5 in the morning. This isn’t a phenomenon that’s unique to me, though. Like most Singaporeans, I live a pretty busy life, so unfortunately, sleep isn’t a priority for me. The thing is, with long term impacts of chronic sleep deprivation being diabetes, heart failure, and even stroke, it should be.

So, after countless years of staying up until the wee hours of the morning, only to snooze my alarm clock and spend my day stifling my yawns, I decided to try waking up at 5am for a week to see if it would do anything to fix my sleep schedule. The results were pretty surprising.

Why I don’t get enough sleep

Before we jump into what it was like waking up at 5am for a week, I think it’s important to make clear why I decided to do this in the first place. More specifically, why had I been sleeping so late and when had this all begun?

I’ve always been a night owl. Growing up, I rarely said my goodnights before midnight. By the time I got to secondary school, I was sleeping at 2 or 3 in the morning despite needing to be up at around 5am the same day. This habit persisted in Junior College, but truly spiralled out of control when the pandemic hit. A screenshot from my sleep tracker app. Prior to the challenge, I would get around 3 hours of sleep on average.

With the need to leave my house gone, there was no longer any structure to my routine. The colour of the sky became a suggestion, not a rule, of when to go to bed. I’d close my eyes for the first time when the sun would come up, at around 6 or 7 in the morning, only to wake up at 1pm to attend to my responsibilities. 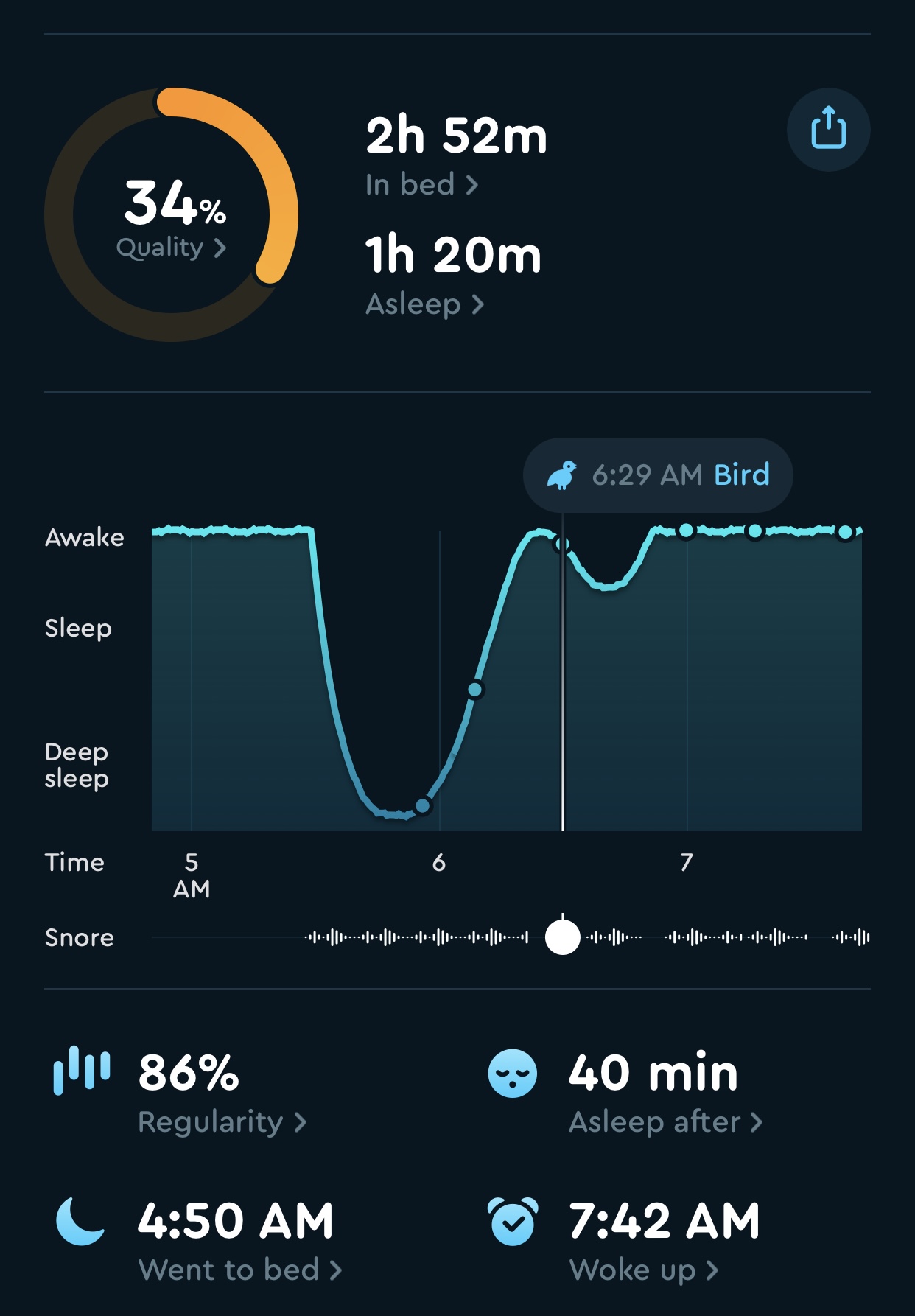 Some days, I would even get as little as an hour of sleep. It’s no wonder why I was exhausted.
Image credit: Cherisse Goldwich

Instead of forcing myself to go to bed earlier to mitigate this, I believe I’m a part of an opposing phenomenon called revenge bedtime procrastination. Fancy terminology aside, it simply means going to bed even later so you can feel like you get more time out of your day. For me, I spend my extra hours unwinding with a good Netflix show, catching up on work or just meeting friends.

Although the return to a post-Covid world has inevitably forced me to temper my habits a little, it’s done little in changing them. Today, I feel the effects in full force – I’m constantly exhausted, have very low energy and don’t feel like I get very much out of my day. I find it hard to manage my time, and struggle to stay productive. I’m tired of being, well, tired. My days may have been foggy, but one thing was for certain: by will or by force, I had to go to bed earlier. True to my style of only doing things in extremes, I decided to force myself to get up at 5am for a week, just to see if I could change up my habits. Specifically, I wanted to challenge myself to get 8 hours of sleep regularly, in spite of my hectic schedule and night owl tendencies.

The challenge of waking up early

Just like that, the terms were set: 1 week, 5am each day, no excuses. As determined as I was, I was still realistic; this wasn’t going to be a miracle cure for my years of chronic sleep deprivation. But at the very least, I hoped that living a week as an early bird would leave me with some better habits that I could keep, even beyond the end of the challenge.

I started off strong on day 1. Perhaps it was the excitement of embarking on a new challenge, the fact that I went to bed at 9pm the night before or just sheer luck, but I woke up a couple minutes before 5am. With work only starting at around 8am, this left me with 2 extra hours to do whatever I pleased. 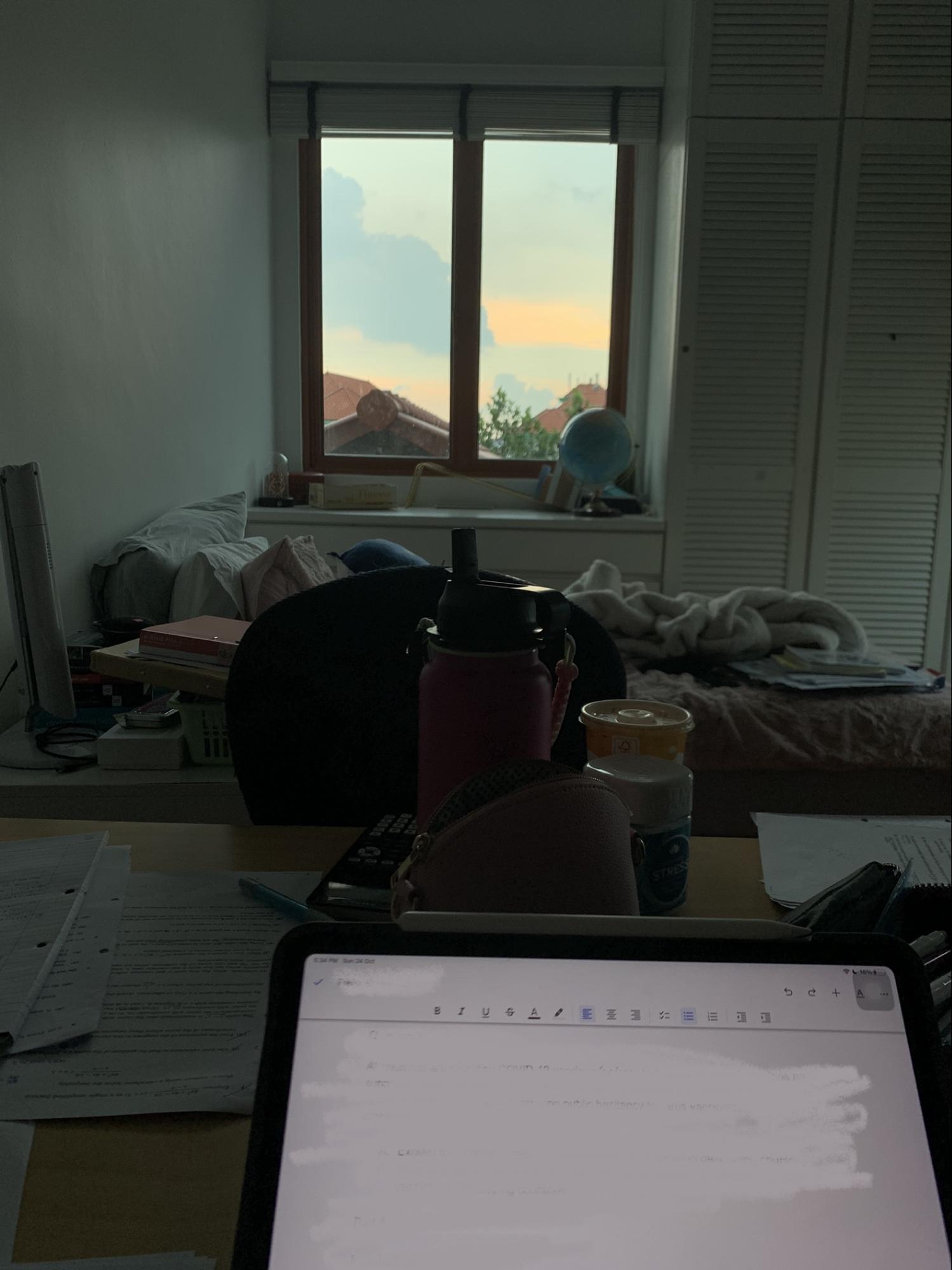 Getting an early start to the day – so early that I was even able to catch the sunrise.
Image credit: Cherisse Goldwich

If you were expecting me to spend my time doing morning meditation, making a smoothie or doing some yoga, you’re going to be disappointed. In true Singaporean fashion, I spent my time working. Without any distractions, I was able to finish an article before the work day even began. This put me ahead of schedule for the day, and lo and behold, I was in bed by 9pm.

My success in keeping to the challenge during the day may have been impressive, but that’s where it ended. By nightfall, I had developed a strange case of insomnia. No amount of tossing and turning or counting sheep seemed to do the trick. I finally drifted off to sleep at around 12am, 3 hours after I had first gone to bed.

I woke up late, at a little after 6am, no prizes for guessing why. Defeated, it felt like I had regressed right back to my usual ways of scrambling to get through my day.

In order to make up for this early setback, I had to really grind. I might have normally had the option to finish any backlogged work after hours, but this time, I needed to be done on time so I could get to bed early. When nighttime rolled around, I was pretty beat. Instead of forcing myself to stay up like I normally would, I went right to bed. I went out like a light, and it was glorious.

The next 2 days were uneventful – I woke up each morning, got an early start on my assignments, and was consequently able to actually call it a day at the end of the day. I enjoyed having quiet time in the morning, and the lack of distractions did wonders for my productivity. More than that, I felt more energised than usual, and was in a pretty good mood. I was able to get into the office early, and leave early as well. On this day, I was the first one in.
Image credit: Cherisse Goldwich

As much as things were looking up though, it wasn’t all a dream.

Much like anyone else, I enjoy the occasional supper. Nothing beats the feeling of driving out to meet your friends for a good meal when the rest of the island is asleep. Much to my chagrin, however, this new schedule didn’t allow for any after-hours meetups – heck, I was now in bed when most of my friends were wrapping up dinner. 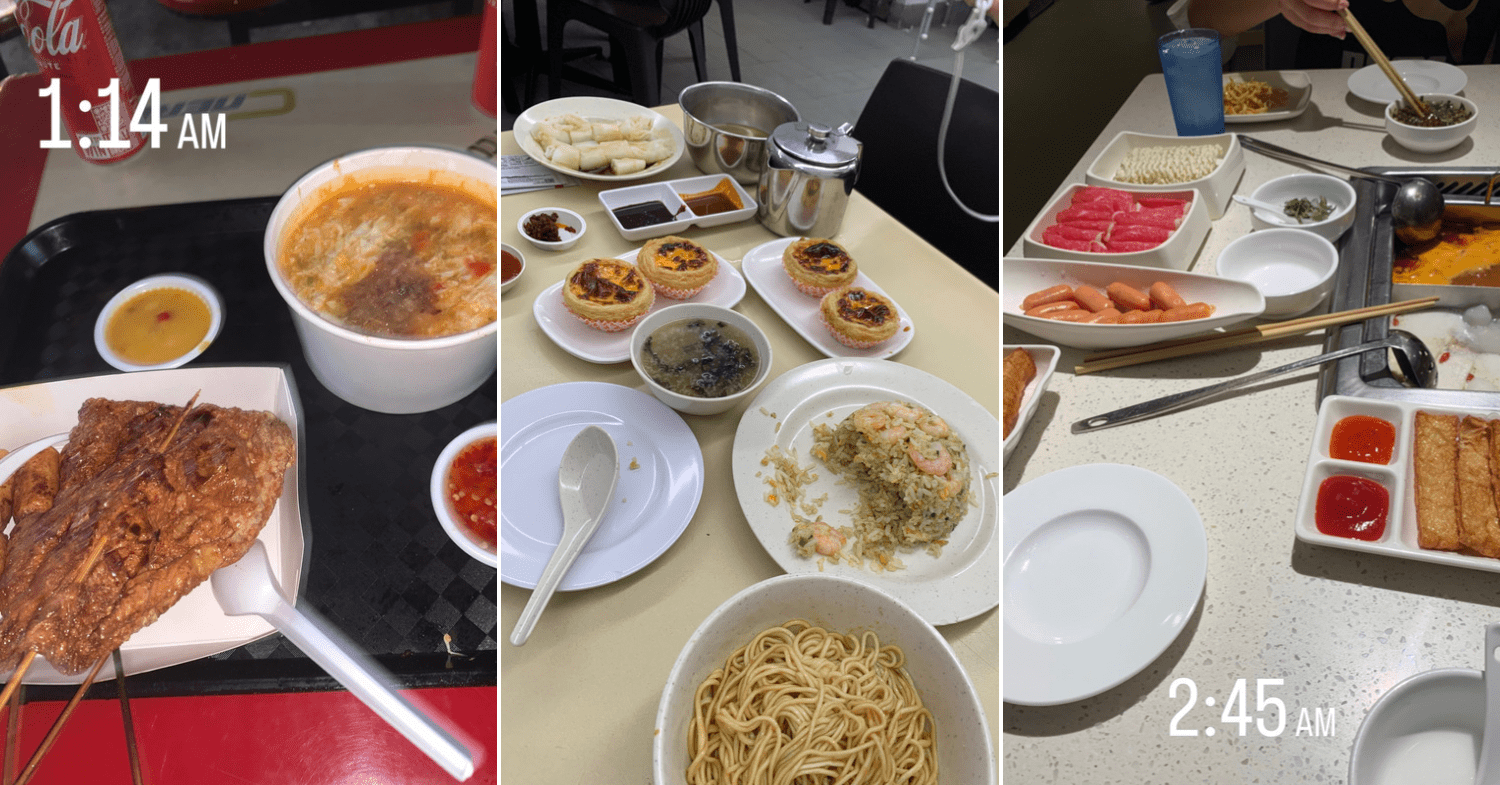 This social isolation was not something I had anticipated. If anything, I thought I would have the most trouble having to get up, not having to stay in. I’d imagine that the serenity of the early morning would probably be an introvert’s dream. But as someone who values spending time with loved ones, and does most of that late at night, it was frustrating to no longer be able to.

By day 5, I was on the home stretch. With the end in sight, I felt like a little kid again, excited for my soon-to-be extended bedtime. At this point, I was on a roll – I’d get up early, get a headstart on my tasks, and then go to bed as soon as the clock struck 9pm – like literal clockwork.

Knowing I was on this challenge, my family pointed out that I seemed more well-rested than usual. One might dismiss their observations as placebo, but I think they were right. I stopped snoozing my alarm in the morning, and got through my days with relative ease. Before I knew it, the 7 days were up.

What I learnt from waking up early regularly

So now for the golden question: would I do this again? The short answer is no, but not for the reasons you might have in mind.

You see, I say no not because I don’t think it “worked.” Just so we’re crystal, it did. I hadn’t gotten this much done in the morning since, well, ever. For the first time in as long as I can remember, I was able to hit the elusive 8-hour shut-eye a night, something most people still struggle to achieve.

I was able to hit my sleep goal of 8 hours for the first time.
Image credit: Cherisse Goldwich

The truth is, as much as getting up early was good for me productively, it was pretty awful socially. Between being awake when no one else was, and asleep when everyone else was awake, I found it nearly impossible to maintain much of a social life. 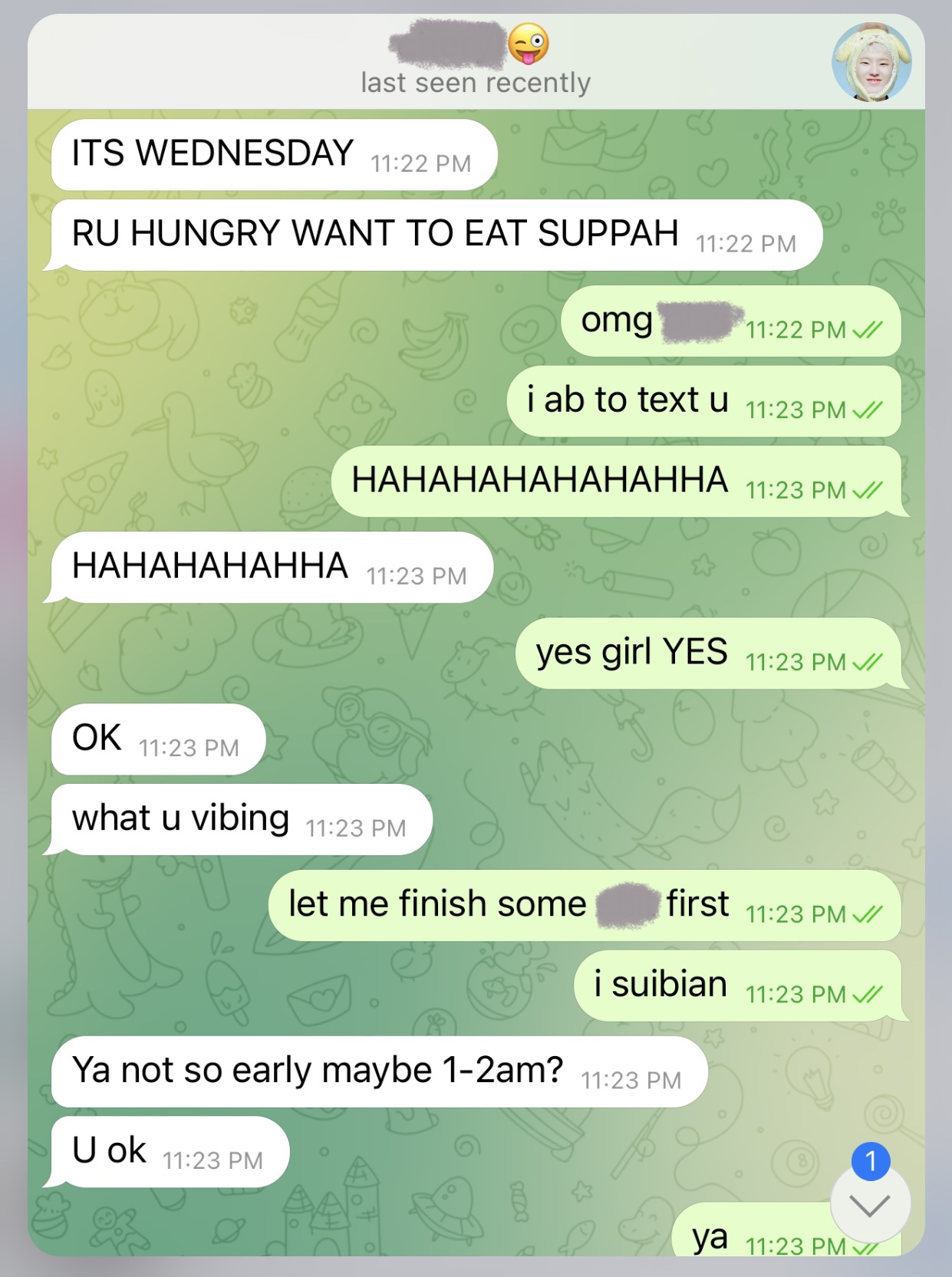 The texts I once looked forward to most were now a reminder of what I couldn’t do.
Image credit: Cherisse Goldwich

Gone were the days of the 3am “U up?” or “U hungry?” texts because, well, I obviously wasn’t. I attended suppers remotely – 6 hours later through IG stories, and had my daily Netflix fill taken away from me entirely.

It wasn’t all a nightmare though; the quiet mornings created a really conducive environment for productivity.

With nothing new to scroll through on social media, no new texts to respond to, and no one to talk to, the conditions were perfect for me to sit down and just get sh done.

This carried over to later in the day, because I was able to wind down much earlier than I ordinarily would. Best of all, most of my earlier gripes with my old sleeping habits went away – I was more well rested, in a better mood and no longer had to worry about my incessant yawning making me seem disinterested in those around me. 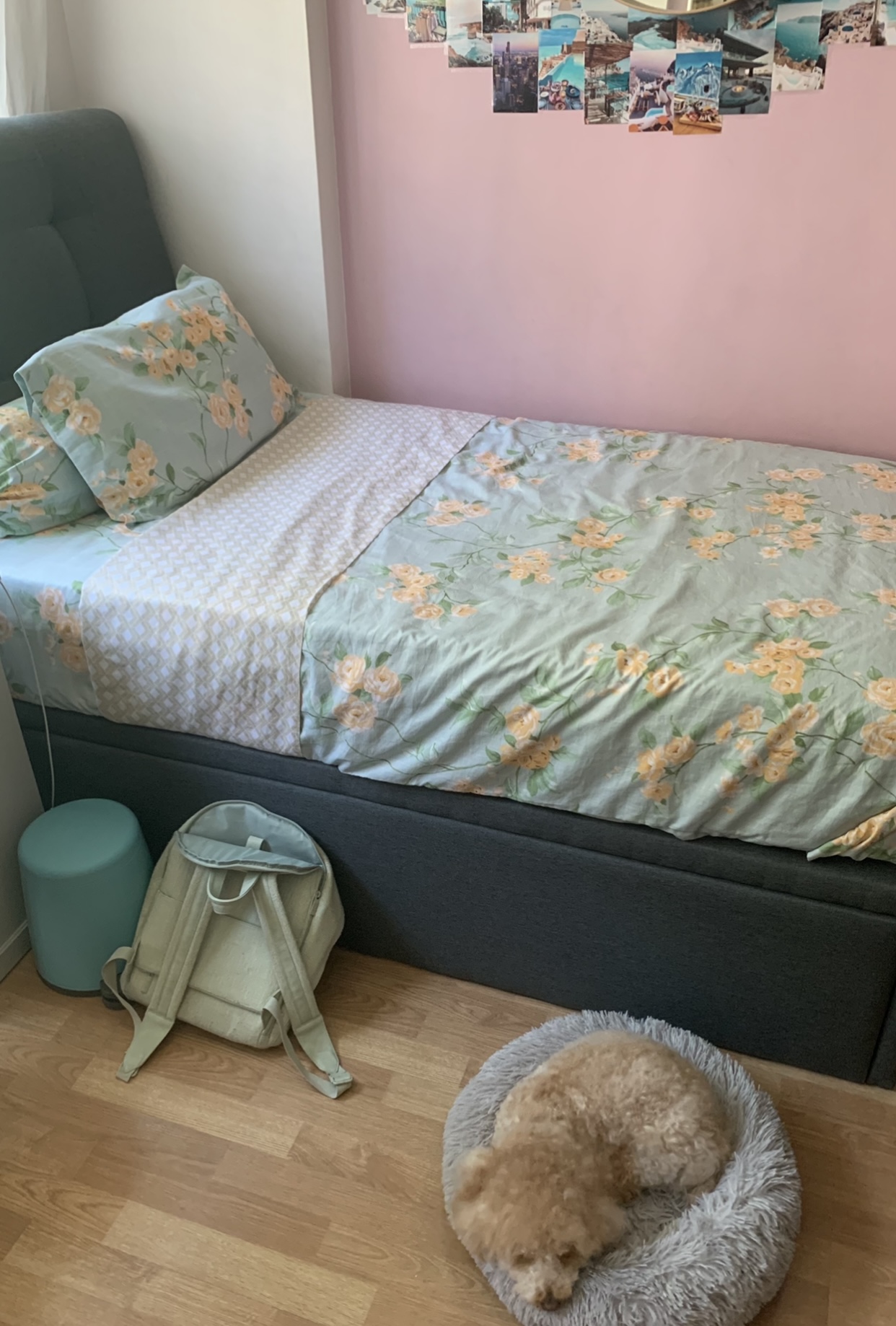 Just look at this and tell me you wouldn’t want to fall asleep here.
Image credit: Cherisse Goldwich

In fact, there were days where I would even go so far as to say I looked forward to bedtime. After a hectic work day, the thought of burrowing under the warm covers and just KO-ing was an absolute dream.

The verdict – Final thoughts on waking up at 5am

So, while I wouldn’t do this again personally, I do see myself incorporating some of the habits picked up from the challenge into my routine. More specifically, I see myself putting in a bigger effort to push my bedtime forward by a couple hours. 2am or 3am may not be ideal, but it’s a compromise that will allow me to better balance my social and resting needs.

Now, if the question was, instead, if I’d recommend the challenge to others, my answer is a resounding yes.

Before you come at me for being a hypocrite, let me explain. I may not find it sustainable to carry on long-term, but if that’s not the goal, I believe it’s an experience worth a try. The early bird life is not for me, but it might be for you – you won’t know until you give it a shot. Even if it is a shot in the dark. Circles.Life Is Giving Away A Yacht Trip & Sunset Dinner Cruises For Existing & New Users This July
1-Day Orchard Itinerary For BFFs To Have The Ultimate "Tai Tai" Day Out Besides Just... 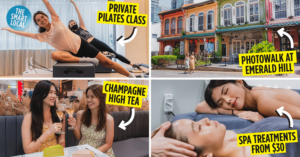