Deny thy father and refuse thy name;

Or, if thou wilt not, be but sworn my love,

And I’ll no longer be a Capulet.”

Oh, how this gets to me all the time. If you have no clue as to where this famous quote came from, I suggest you do some proper soul-searching and question your existence.

This excerpt is actually from William Shakespeare’s renowned play ‘Romeo and Juliet’. It tells the tragic story of two star-crossed lovers, Romeo and Juliet, who fall in love with each other despite hailing from rival families.

If you’re a Shakespeare buff like me, or simply want a cool place to take your date to for Valentines’, you can head down to the Drama Centre Theatre between 13th – 23rd February to catch Toy Factory Productions’ musical adaptation of Romeo and Juliet. Before we go into their interview, here’s a sneak preview from one of their songs in the musical. 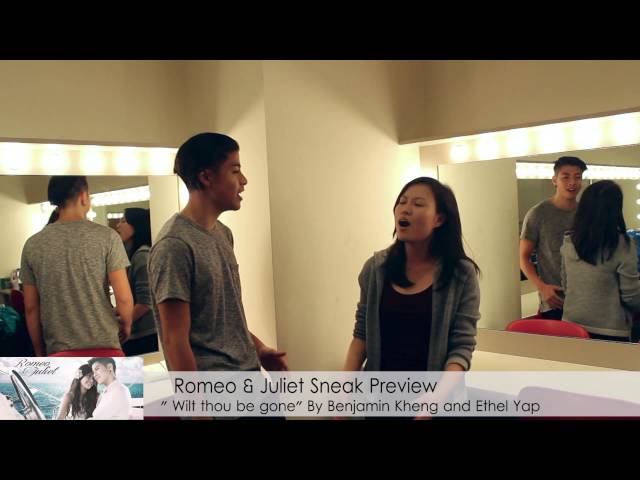 Interview with the leads

We managed to catch the leads of the upcoming musical during their rehearsals for a short interview. I was super excited to meet the extremely talented Benjamin Kheng and Ethel Yap who stars as Romeo and Juliet respectively.

Here’s some fun facts: Benjamin is also part of the local indie band, The Sam Willows, while Ethel graduated from the London’s Royal Central School of Speech and Drama with a Masters (Distinction) in Musical Theatre! Q: What’s your favourite scene in Romeo and Juliet?

Ethel: I like our balcony scene and the scene I have with the nurse where I ask her what Romeo’s response is. I really enjoy those two.

Benjamin: Same. Balcony scene, for sure and all my fight scenes! It’s fun to be a guy.

Ethel: (laughs) So Ben, what’s it like working with me?

Benjamin: Yeah, she’s really an amazing performer and we’ve already worked together once, sort of.

Benjamin: This would be the second time (we’re working together), I suppose. It’s really fun to just bounce energy off her. It’s always important to share the energy onstage and with her, it’s effortless. It’s super easy.

Ethel: I really love working with Ben. I think that we have a great energy. We share a lot of interests and we’re just like buddies. As an artist and as a creative person, he is just brimming with ideas, energy and so much to offer.

Q:  In 2012, W!LD Rice released a production of Romeo and Juliet, directed by Ivan Heng. Do you feel pressurized to live up to the standard that the previous Romeo and Juliet set?

Benjamin: Well, it was really good. As much as you don’t want to put pressure on yourself, there’s always this very silent comparison. But, I’m very happy for its presence. It’s just another retelling of this famous classic. There’s been so many already.

You get to take away something from each thing but then again, it’s a totally different universe that’s been created. I mean, the scene created is totally different. You have to stay true to that. You’re going to betray everybody if you’re worrying about some other world which you’re not living in. So, we’re going to exist in this one.

Ethel: I think because the two productions are relatively close to together in terms of time, people would inevitably make comparisons. But I really feel that none of the cast members in this show have brought that baggage along with us. I think we’re just here to make something new, make something fresh.

Q: (For Benjamin) You have the lead role in both Romeo and Juliet as well as the Ah Boys To Men musical. How do you manage juggling rehearsals between the two?

Benjamin: Thankfully they are just next to each other. So, there’s no overlap. The day I wrap this, the next day I start rehearsals for that which is great! There was a bit of time when I was rehearsing for that as well – it was the most schizophrenic thing ever. You go from really rich – I’m not saying that Ah Boys is simple – but in comparison, the text in Shakespeare is so heavy.

Benjamin: Yeah, it’s a different ball game but it’s fun lah. It’s fun for an actor, for an artist. This is really enjoyable. I’m finding out so many new things about myself in this production because the text is so incredible.

Ethel: Oh man, that is a loaded question. For me, I studied for a bit in London where I did my masters. In a place like the UK where the culture and the heritage of the arts have so much history. The arts have been a part of their lives and culture there for centuries. You can see how in everyday lives, the arts have a place. It’s a very natural and easy part of people’s lives.

People don’t think “Oh, art is only for artists. I am not an artist. Therefore, I have no concern for art.” Singapore is such a young nation and we just need to give ourselves more time to have the arts be embedded in our culture. When it starts from bottom up, from grassroots, from teaching and nurturing kids, just exposing them  to arts in everyday life, then we’ll start to see a significant change in the culture landscape of this country.

Benjamin: Yeah, same, she really speaks for that perspective. I’ve had the opportunity of being involved in the music scene in Singapore. I will say this – that we always lament about a lack of opportunities and why there is not enough platforms or a space for us to get our craft out. But the truth is everything is a supply and demand balance with everything else.

Truth be told, Singapore’s demographic is so diverse and small. At any point of time, if you’re going to segregate yourself into a niche or a certain style, you’re going to get a very small fan base as opposed to being an international artist.

Sometimes it’s really about reaching out to the people in your community as well. I think a lot of others sometimes like to be very esoteric with their work which is great – if that’s for you, it’s for you. But you also realise that there is a whole bunch of uneducated people out there who want art but they don’t understand it.

Benjamin: Yeah, it’s a two person game. You have to reach out as well. So the others have to go in as well.

Q: Do you have any words of advice for young, aspiring Singaporeans who are hoping to dabble in the arts scene?

Ethel: Go for it.

Ethel: Yeah, honestly. Don’t limit yourself. The thing about the Singapore culture is that a lot of people will be like “Oh will I be able to earn money.” Unfortunately, a lot of things will come down to that like how financially sustainable is it.

I would say don’t worry about that, not that you ought to be naive. If you need something to keep you going financially, do that. But, make the time for the arts if that is where your heart is.

Benjamin: Yeah I agree. My dad before I made the decision to do this, gave me this ultimatum. He’s like, “I’m cool with whatever you do as long as you’re all in. As long as you’re in this for the long run.”

Look at any other profession. The people who do the best in it have dedicated their entire lives to it so it’s absolutely possible in any environment and maybe in a very twisted way, being an artist in this culture is an art form itself because it’s about fighting through challenges and obstacles. They’re not really oppressive. It’s up to you to make them an opportunity and as long as you put your heart to it, it’s easy.

Q: What if they lack support from parents? Let’s say their parents are the super strict ‘die-die must go university and do law’ kind.

Benjamin: I don’t know. I mean, art exists in so many ways. You don’t have to spend 24 hours a day doing it.

Benjamin: So some people find enrichment and joy doing it on the side. So if that’s for you and if that’s your circumstance then enjoy it, embrace it and love it the way it is.

Q: With Valentines’ day round the corner, what is the most romantic thing you’ve done for someone?

Ethel: Mmm, plan like surprise parties. I’ve cooked meals…I baked cheesecakes. Those are the things I’ve done for people. The most romantic thing someone’s done for me is take me to some secluded place to play with sparklers.

Benjamin: Yeah, I killed your cousin and then ran away with you….this idiot Romeo. What else? At eighteen, I actually cut an entire music album for my girlfriend.

Benjamin: It was shit! It was so bad.

Benjamin: Yeah so I wrote songs and I tried to record and mix it. I tried to package it. I learnt for a day how to wrap a CD.

Benjamin: But it wasn’t selfless because I enjoyed it too.

Ethel: You made like the track listing and everything?

Benjamin: Yeah I did, I did! I made the album design and stuff. It was probably shit lah but I mean it was fun lah.

Ethel: It’s the thought that counts.

Well, that’s all for today. All the best for Romeo and Juliet, break a leg!

I honestly can’t wait to hear the rest of the musical and I hope you feel the same way too! There will be just 16 shows aired between the 13th to 23rd of February at the Drama Centre Theatre so be sure to get your tickets before they all sell out!

Book your tickets now at sistic.com.sg