Primary 5’s a special year for most Singapore students with adventure camps, overseas field trips and best of all, guaranteed seats at NDP rehearsals. With the parade coming up next week, it seems like the perfect time to take a nostalgic trip down memory lane.

Below are eight relatable P5 NDP experiences all of us had back in the day, from swapping funpacks with classmates to doing the Kallang Wave.

1. Practicing NDP songs before the event

We all know the lyrics to NDP classics like Home, Reach Out For The Skies and Where I Belong by heart. And it’s likely because in Primary 5, your school gathered every class to rehearse the lyrics together in preparation for the show. 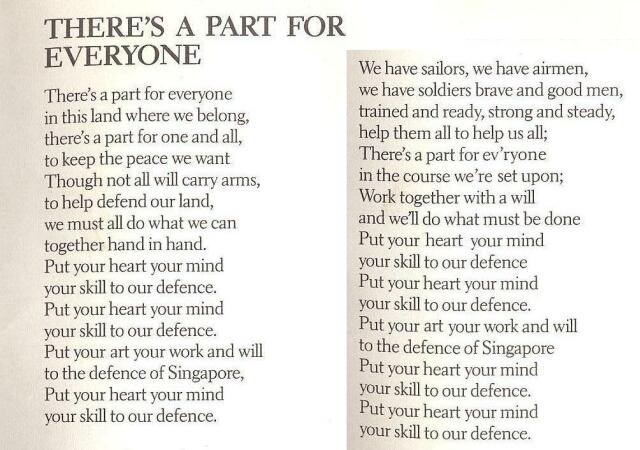 This practice session usually took place in a computer lab, dance room or school hall. You may also remember getting a sheet of paper with all the lyrics squeezed into one page like an exam cheat sheet.

The freebies were one of the most exciting parts of attending the NDP preview. Funpacks were introduced in 1991 and every year’s parade had a different design, each with some variation in colour or print. 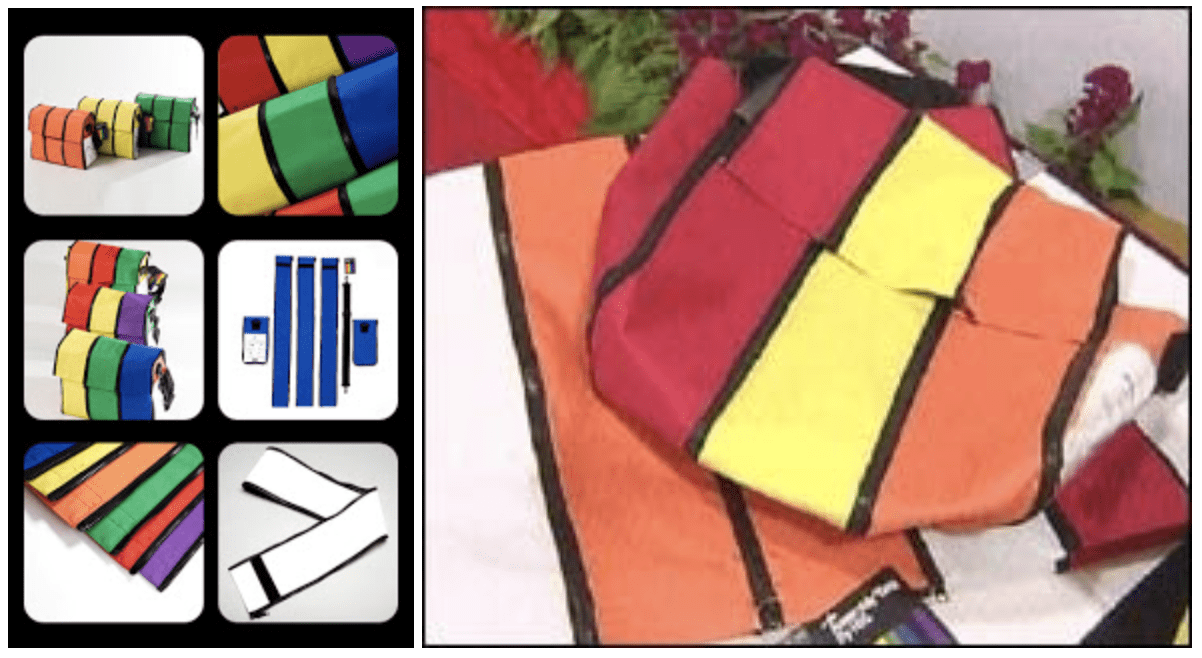 The bags never failed to surprise: In 2007, my batch went absolutely crazy over that year’s colourful zip bags which could be taken apart and zipped back together. Another iconic design was 2009’s which resembled the then-popular Crumpler sling bags. 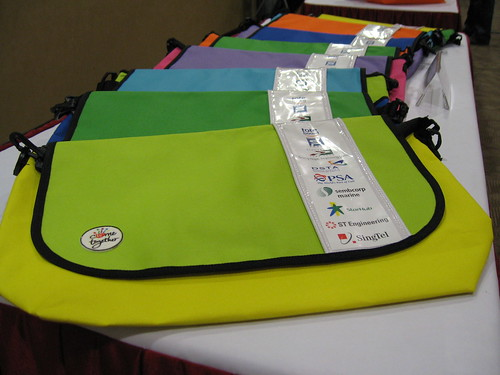 With the variety of different designs released each year, there’d always be that one kid who’d go around asking to swap bags until they got their desired colour. 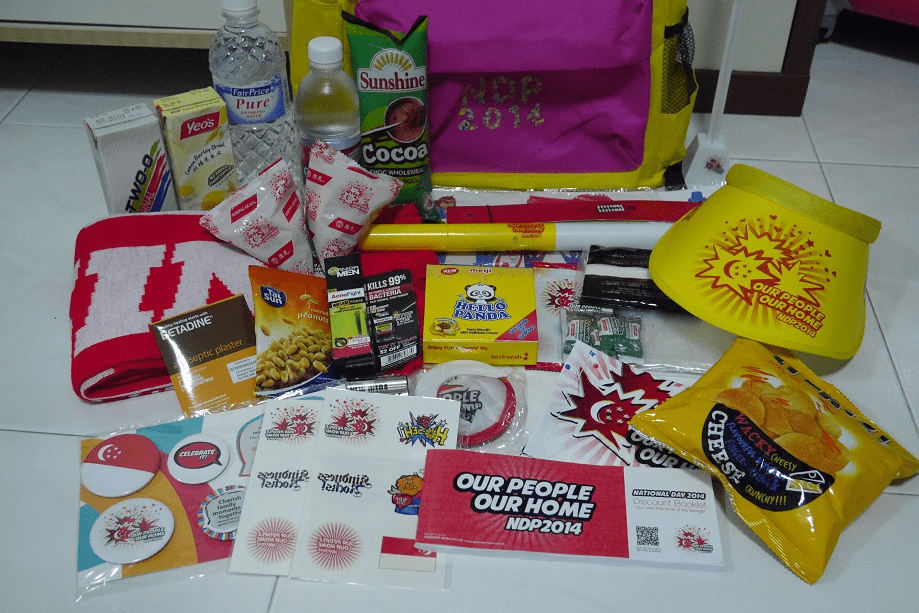 It’s not a funpack if it’s not chock full of snacks and drinks from sponsors. No matter if you attended the NDP in 2000 or 2010, everyone had some combination of Sunshine bread, Milo drinks, Khong Guan biscuits, Old Chang Kee snacks and Yeo’s drinks in their NDP pack. 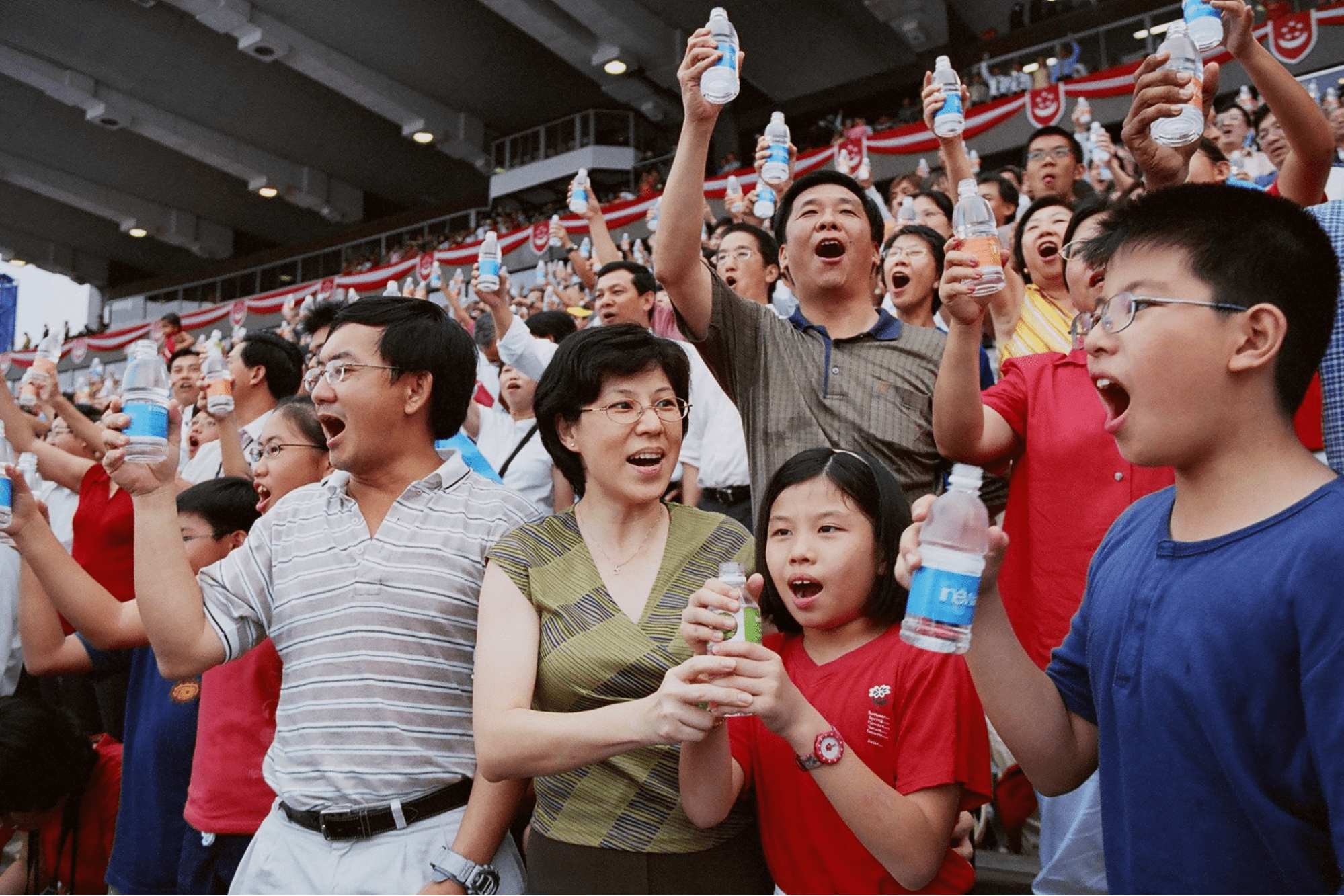 Of course, NEWater has also made an appearance every year, accompanied with a mass yam seng during the parade. 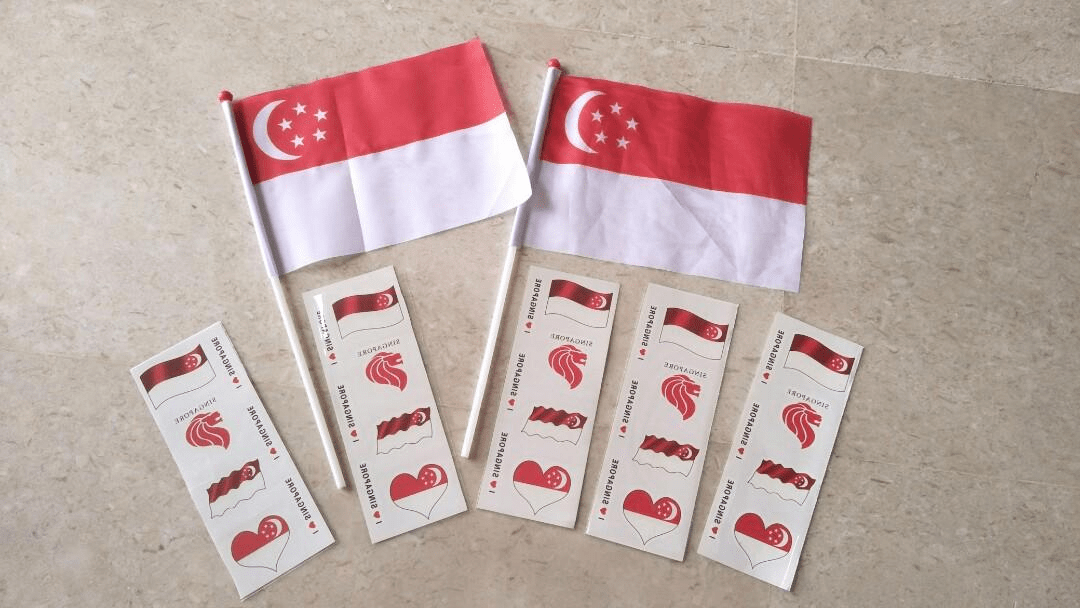 Temporary tattoos were the coolest thing imaginable in Primary 5. You’d grab a friend to help you apply the NDP tattoos onto your arms and face, oftentimes pressing the slip on your skin much longer than necessary to make sure it stayed on. 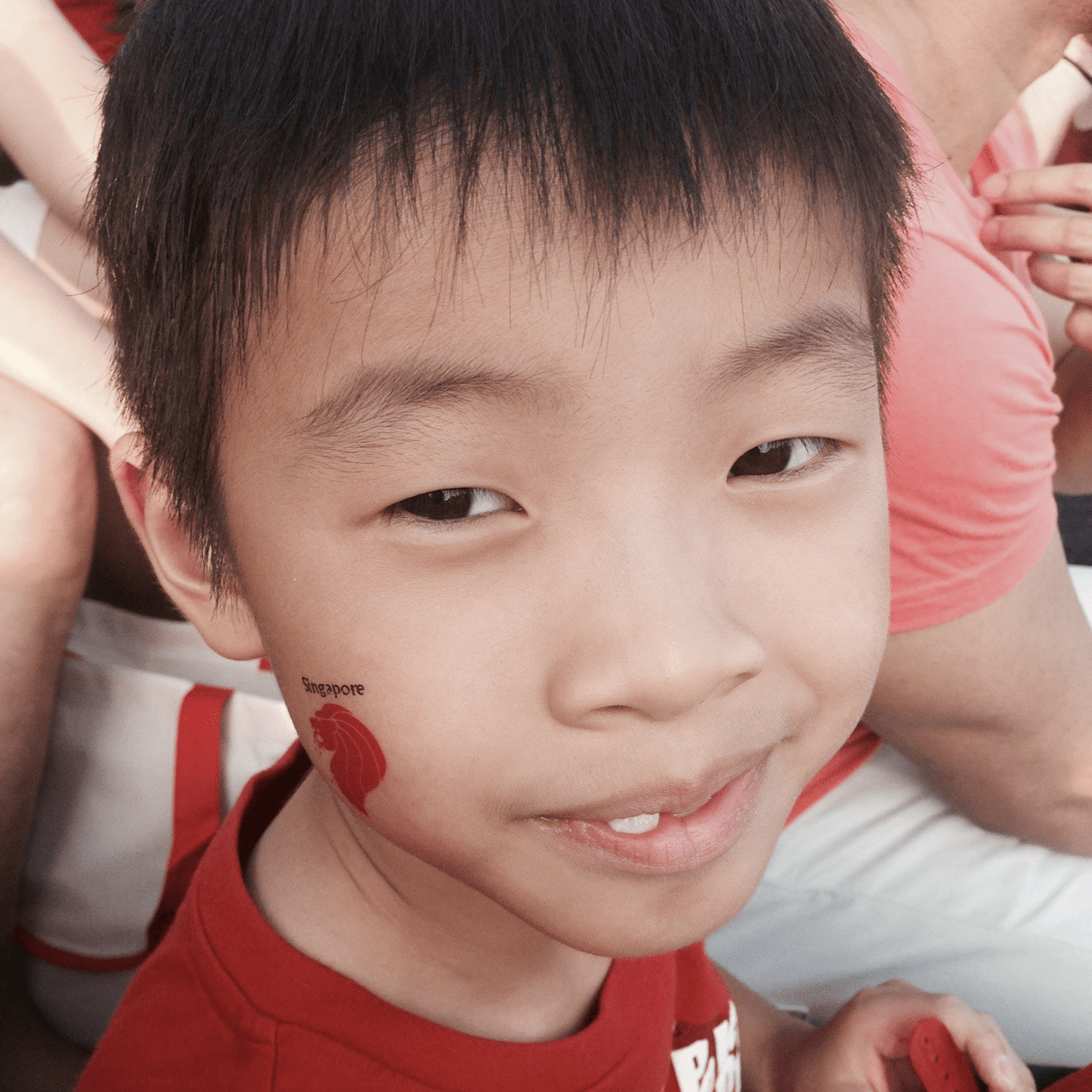 The cool kids put it on their cheeks.
Image credit: Josiah Neo

5. Pretending the light stick in the NDP pack was a lightsaber 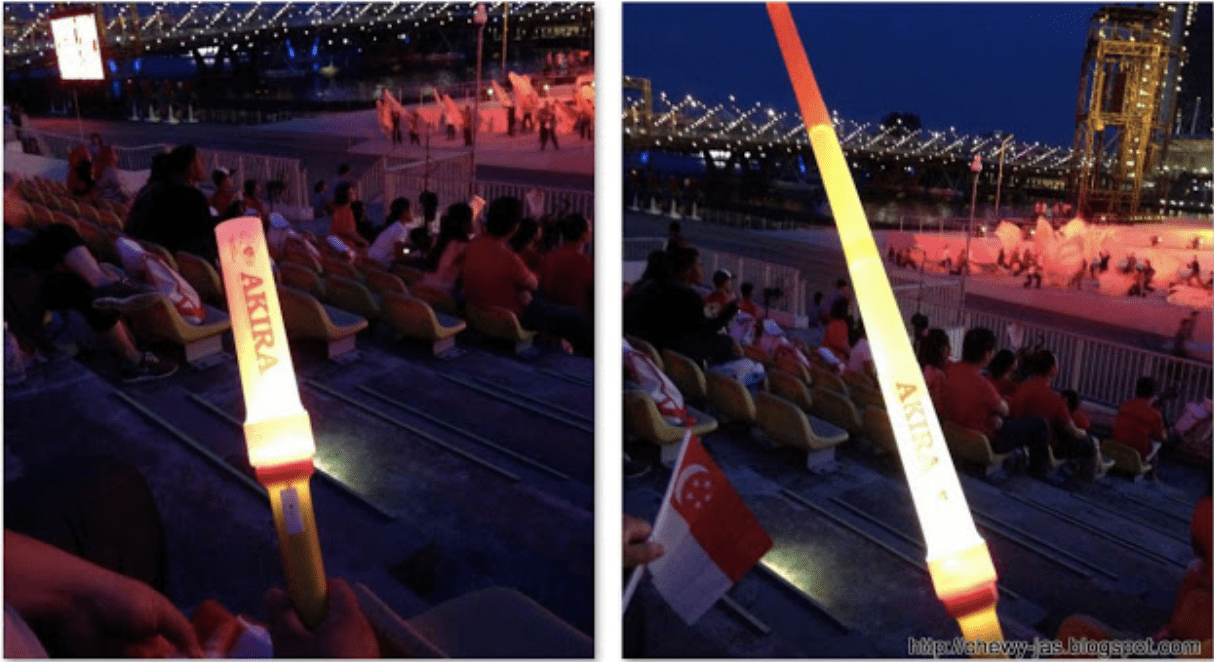 It didn’t matter if we had never heard of Star Wars or Darth Vader. The NDP light sticks were the perfect tools for some spontaneous sparring while waiting for the parade to begin. If not for a quick fencing match, we would use these light sticks to playfully bop a friend several seats away before looking away innocently.

6. Flipping through the voucher booklet & picking out food discounts

Among the food, NEWater and “lightsabers”, you’d find the most precious thing in the funpack: the voucher booklet. These days we have NDP e-vouchers, but if you’re old enough to remember the physical ones, you’d remember digging out discount coupons for KFC, Mr Bean and Swensens.

At 11 years old, we’d have no idea what to do with the spa and beauty treatment vouchers, so we’d set those aside in favour of the F&B ones.

7. Doing the Kallang Wave, even if it’s not at the National Stadium

Other than watching the fireworks and Red Lions leaping out into the skies, participating in the Kallang Wave was an NDP staple you couldn’t miss.

It didn’t matter if you were at the Padang or Marina Bay Floating Platform – the boisterous human wave was always called the Kallang Wave. Best part is, the crowd always took it seriously, so the wave would go on for a few rounds before everyone got tired.

8. Spotting your friends on the audience cam

There were always a gazillion cameras at every National Day Parade preview and as one glided over where we were seated, many of us would scrutinise the giant screen, hoping to spot ourselves or a friend. Occasionally, there’d also be that one cheeky kid who would pull a daring stunt on screen – just like 2017’s infamous “middle finger kid”. Iykyk.

No one really knows why Primary 5 students are the ones who get to go to the National Day Parade rehearsals. Why not Primary 4? Or secondary school kids?

Our bets are on the fact that P5 is when you’re finally old enough to know what’s going on but not too busy mugging for PSLE. Even if we never find out the official reason, we’ve got no complaints – getting to watch the parade rehearsals with our classmates is certainly an experience to remember!

More reads for this National Day: 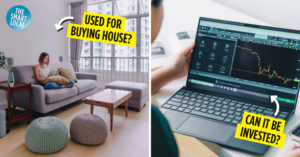 Guide To CPF Contribution In Singapore, So You Know Where Your Money’s Going & How To Use It
11 Freebies At Hai Di Lao Singapore To Take Advantage Of During Your Next Hotpot... 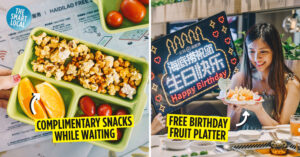