Getting a car in Singapore

There are two types of people in Singapore. The folks who know how many MRT stops there’re from Somerset to Yishun – 10 – and those who’re familiar with where to get cheap or free parking in Singapore.

For everyone who has considered getting a car in Singapore, the question remains: is it worth it to jump camp to the latter? After all, there’s rising COE, the increasing connectivity of public transport and many cab or ride-sharing options out there.

Yet, not many can resist the siren call of a sleek Porsche or the convenience of having your own drive on the road. No matter, we’ve done the math to help you evaluate if getting your own car trumps that of taking a cab everywhere.

Note: This is meant to be a general guide only, and is not meant to be representative of all cases.

Average cost of getting a car in Singapore

With the massive variety of cars in Singapore, how on earth are we gonna come up with an “average”, you might ask?

Seeing how we can’t ask the entire driving population how much they spent on their cars without being as annoying as a CNY relative, we’re projecting for a debatably average Joe scenario. Literally.

Joe is a mid-20s CBD worker who drives a Honda Civic from Tampines to work in the CBD every day. He also drives out to places twice a weekend – probably cafe-hopping or dates with his family or girlfriend.

We’re choosing a Honda Civic here as it’s one of the most popular cars in Singapore according to sgCarMart, and used in many driving schools for beginners as well.

But all that is when you first get the car.  When comparing, we’ll be looking at a rough estimate of how much it’ll cost Joe monthly to own the car. Road tax is something you have to pay, regardless of how much you drive your car around. This varies according to the vehicle’s engine capacity, age and fuel scheme. In Joe’s case, this will be $742/year.

Since our guy stays in Tampines and probably parks his car in a HDB estate, his season parking for that can go up to $110. Let’s assume that his company is covering the cost of office parking (lucky fellow!) 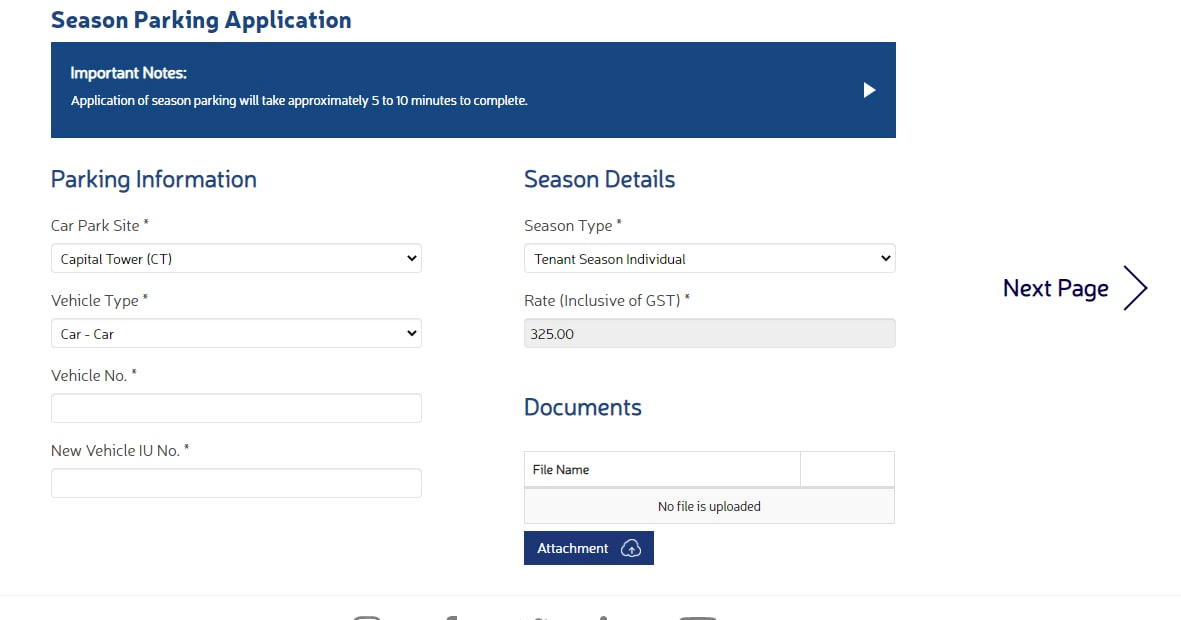 Note: Some offices do not offer free parking, so you have to top up for monthly season parking. This can be a few hundred bucks, but we’re leaving it out of the equation to keep costs as low as possible. Image credit: HDB

As for the weekends, if he lounges for around 4 hours at a Tiong Bahru cafe on Saturday morning and spends the entire Sunday at Orchard Road, that would cost around $4.8 and $3.20 each (for Tiong Bahru Market and one-time entry at Forum the Shopping Mall respectively.) We’ll take this as an average cost for his weekends. Some of the cheaper parking spots in the Orchard / Town area. Subject to timings.
Image credit: Capitaland, Foodadvisor, Forum

The distance from Tampines MRT to Chevron House, Raffles Place – Joe’s hypothetical home and workplace – is around 20KM. That’s 40KM to and fro for each weekday. His weekend jaunts will clock up a total of 76KM.That’s about 39.43KM/day – around 1182ins.90Km/month.

A Honda Civic’s full tank is around 50 litres, and at a fuel economy listed at 14.9KM/L, that theoretically should allow you to travel a good 745KM before you hunt down a petrol station.

According to Global Petrol Prices, the average cost of a litre of petrol in Singapore is around $2. A full tank of 50 litres would thus be $100. ERP was suspended a little while due to Covid-19, but it’s back now since 12th April with rates going back up for selected roads. Though Joe might not be affected now, for the sake of future calculation, we’ll estimate it as $1 per entry and exit, leading to around $40 monthly if we take it as 20 weekdays applicable in a month.

According to ValueChampion, based on analysing quotes from car workshops, the cost of getting your car serviced averages out to $2,640 across 5 years. This comes up to around $44/month, but we’ll round it up to $50 just to add in some buffer.

Looking at car insurance providers like NTUC Income, MSIG , FWD and more, annual premiums for yearly insurance ranges from $800+ to just over $1,000. Averaging it out, that would be around $994 annually.

This is the total table summary of all the monthly ownership costs: Other scenarios of getting a car in Singapore

Yes, yes, we hear your protests. “You can choose a cheaper car what?” or on the other spectrum, “I don’t drive around that much, please.”

To clarify, the above is just one scenario. Some other permutations:

What about getting a cheaper car?

If we were to choose the cheapest possible option in the new cars for sale category as of April 2021, that would be the Perodua Bezza 1.3 Premium X going for $73,999 including COE. That’s a monthly installment of $737, and assuming the other monthly costs remain generally the same, the lowest you can go will be in the $1,200+ range.

What if I don’t drive to work and only use it on the weekends for family or outings?

Ah, the red plate scenario – aka you’ll only drive your car during weekends or off-peaks. That would be:

With off-peak vehicles, you’d pay lesser road tax versus regular vehicles. You would also get a rebate of $17,000 that can be used to offset the initial purchase price.

According to a friend who uses a off-peak Honda Jazz vehicle, his road tax is $184 per year versus the regular $684/year – a discount of $500. You’d probably also save on petrol, ERP and parking costs.

If we’re talking about Joe’s lifestyle habits (weekend only), that pulls down the monthly car owning bill to $1,287.27.

Now that we’ve sorta have a grasp on the monthly costs of getting your own ride in Singapore – what if you took a cab everywhere instead?

Let’s just go with the ol’ average Joe scenario above. A Grab ride from his home at Tampines MRT to his workplace at Chevron house – assuming he doesn’t do WFH no more – would cost around $17.30. 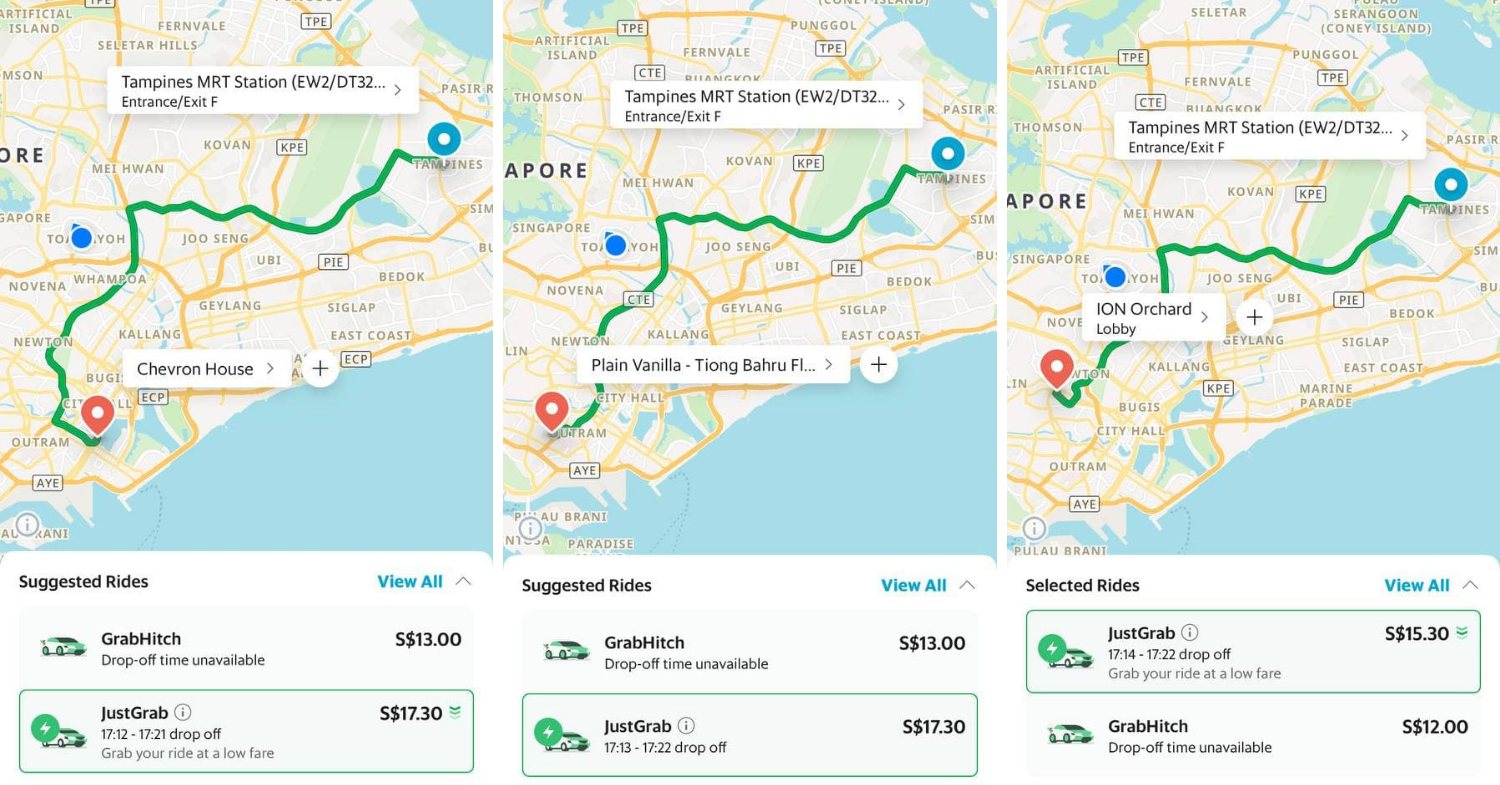 Checking out Grab rates for imaginary weekdays and weekends to the CBD, Tiong Bahru Bakery and ION Orchard respectively.

To and fro, 5 days a week. That’s $692 per month for weekday commutes. Assuming this guy is a creature of habit and goes to a Tiong Bahru cafe every Saturday, and Orchard every Sunday as per the original scenario, and takes a single cab to each place, that would be $17.30+$15.30 every weekend.

At a glance, here’s how the monthly bill of the various options looks like:

With the same Joe scenario, taking a cab is generally cheaper than owning your own car. That’s even taking into account how unlikely it’ll be for you to take Grab cross-island to and fro for every single workday, when there’s a wealth of public transportation options that allow you to skip the jam.

So, TLDR – no, it generally isn’t worth it to get a car if you’re just basing it on monthly expenses. But getting a car can still be worth it if you’re looking at it in more intangible terms – such as convenience or or as a status symbol.

For instance, you might be willing to pay more for the convenience if you have a family and want to drive them around frequently, or need to drop kids off at school, or if you’ve elderly folks who are less mobile. Some highly mobile jobs such as sales could also necessitate getting a car to meet up with clients all over the island. 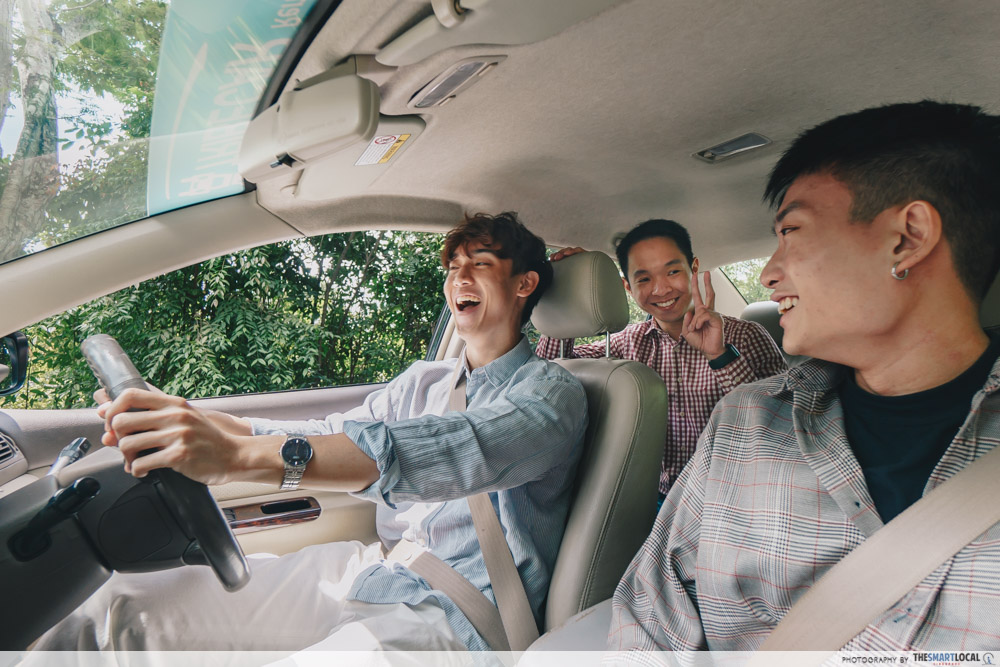 However, if you don’t, our public transport system might well suffice – especially considering the extensive MRT developments slated for the future. You might also get in slightly more exercise by walking as opposed to hopping in your ride, say, after a heavy meal.

That doesn’t mean we’re discouraging buying a car, as factors might vary for you. So, if your dream car is still calling out to you, consider getting a ride second-hand from Carousell to shave off the bill slightly or wait it out till COE prices plunge yet again. Some resources here: