Hiking to the Lost Ark

It took a lockdown and a half for many of us to realise that adventure isn’t always a plane ride away. Within Singapore, we’ve since unravelled the secrets of Maju Forest, the ins and outs of St John’s and Lazarus Island and of course, the serene trails of Clementi Forest. Below, we explore another hidden gem, the Lost Ark: a hidden wooden deck built out of a fallen tree, located along the Green Corridor.

P.S. Don’t forget to be a responsible visitor, look after the amenities there and pick up any litter left behind before leaving.

Hiking to the Lost Ark Like many of the greatest hikes in Singapore, the Lost Ark isn’t easy to find. On Google Maps, you’ll find it tagged as “The Deck”’ with only a single review and a handful of images to its name. Obscure? Check. Thrilling? Check.

There wasn’t an abundance of information available online by any means which made us slightly worried about being the next lost-in-a-forest case. Fortunately, we were lucky enough to have a friend who’s been here before, to lead us to one of the many trailheads. Here’s our guide to a short but sweet ~1km hike via Green Corridor Alexandra:

Enter via the Rail Corridor, near Masjid Hang Jebat 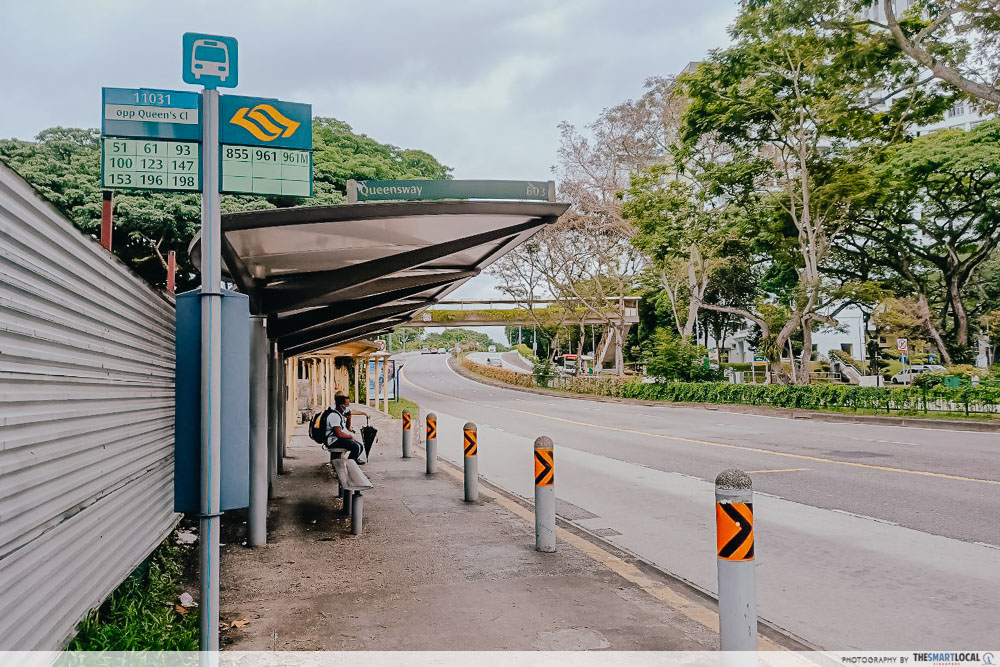 The trailhead we were looking for starts near Masjid Hang Jebat – which in itself, is located in a rather ulu location. The nearest bus stops – Blk 19 and Opp Queen’s Cl – are both located a 700m or 10-minute walk away. Bus 61, 100, 123 and 855 are some of the more buses that you can take to get there. After going past an overhead bridge, turn left and stroll down the scenic paths of the Green Corridor until you arrive at a white mosque – that’s Masjid Hang Jebat, your first landmark. Alternatively, you can also drive or take a Grab ride directly to the mosque.

An obscure entrance lies to the right of the mosque. And I know, a literal gap in a wall of trees doesn’t scream “trailhead”, but spritz on some mosquito repellent and head on in – you’ll soon find a clear path ahead. 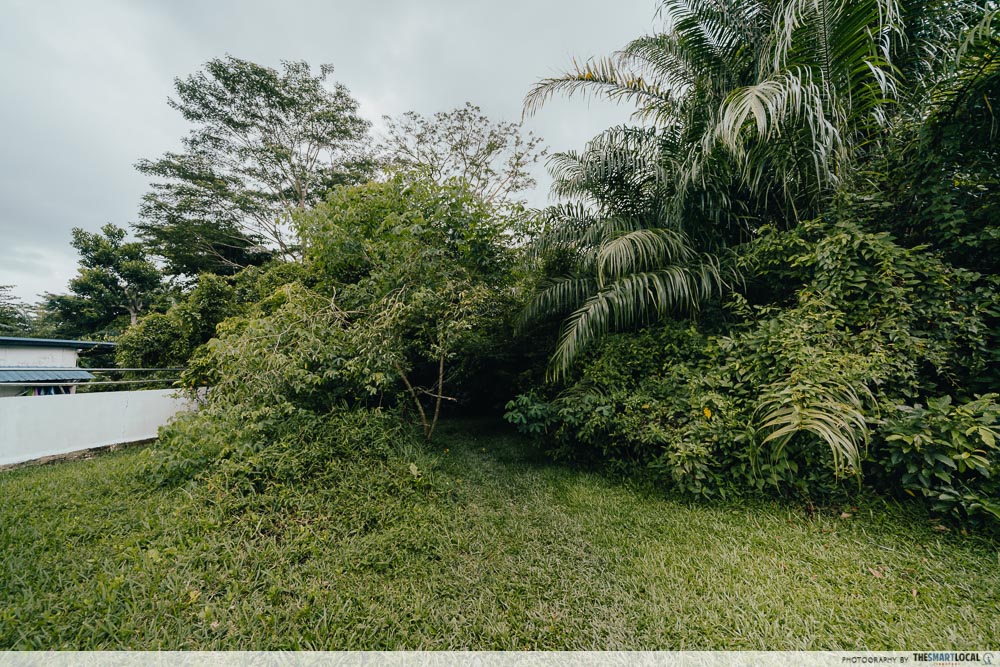 The path bends and splits so we’d recommend turning on your GPS and referring to it as you head south. You’ll soon come across an opening in the forest – your second landmark – and shortly thereafter, the Lost Ark. 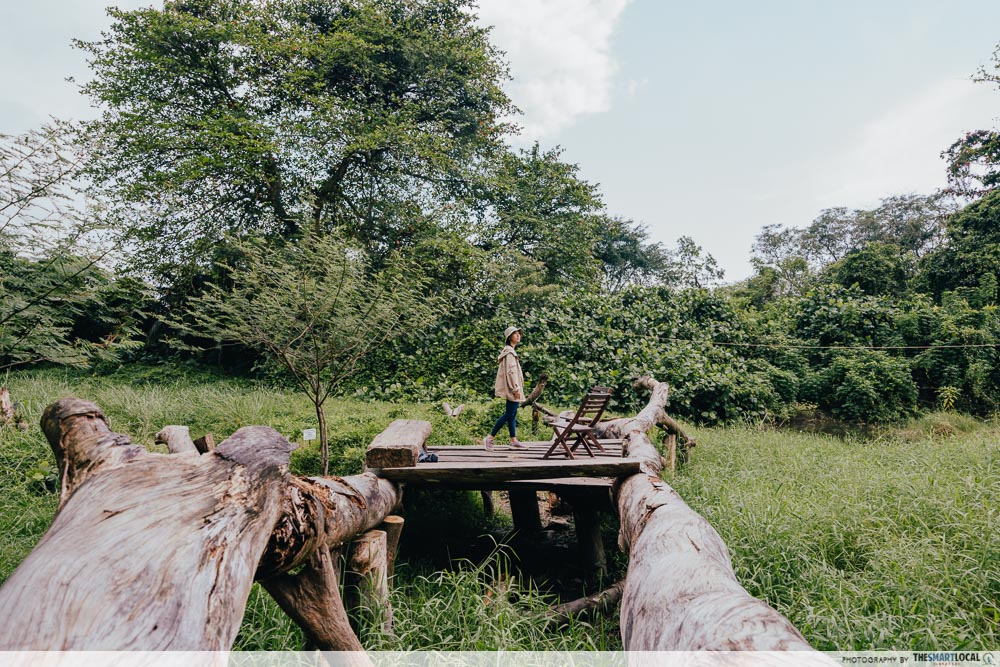 Despite being located within only a small patch of green between AYE and Alexandra Hospital, the Lost Ark channels serious out-of-Singapore vibes – thanks to the fact that it’s almost completely surrounded by greenery. Australia? Europe? This can be whatever escape you need it to be.

Built out of a massive fallen tree, the deck itself is a little worn but clean and sturdy. It’s also equipped with foldable chairs and wide wooden benches you can rest on to enjoy a picnic after the hike.

With a sprinkle of imagination, the deck, with its pointy “bow” and wider “stern”, can be pictured as an abandoned raft washed ashore. If you’re ready to brave muddy paths, come after a heavy rain when the area tends to flood up. We hear that it is then, that the ark truly resembles a drifting raft on a river. Interesting signs of life here include a wok hanging above a fireplace and mess tins packed neatly away in “storage sections” of the ark. According to MP Amrin Amin, the Lost Ark was originally built by a resident who lives in the area for his family to relax and enjoy the great outdoors. However, as it’s risen in popularity among the hiking community, there have been more instances of littering and pollution, as well as cases of deck chairs damaged by irresponsible visitors.

Since this area is not maintained by NParks, it’s up to visitors to take good care of the area so remember to take any litter with you when you leave and avoid being loud as there are residents living in the nearby houses. To exit, continue on the path heading south and in a minute or so, you’ll emerge out of the forest into Warwick Road. Continue down the road and turn down Alexandra Road to arrive at a bus stop several attractions are located nearby including IKEA Alexandra.

Exploring the Lost Ark in Alexandra 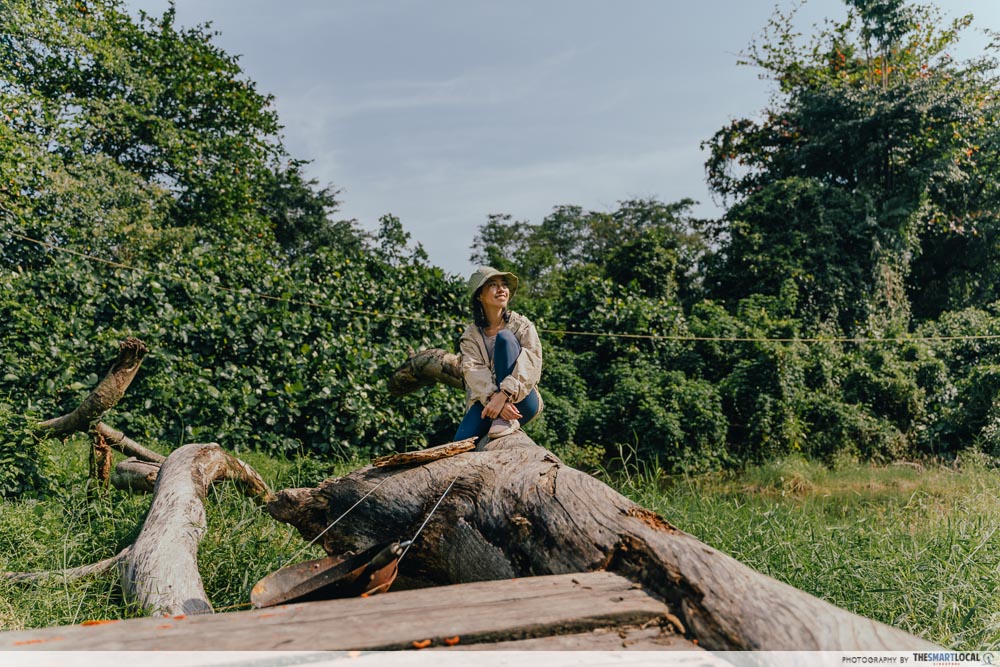 Of all the hidden hiking trails we’ve found, the Lost Ark has to be one of the most unique. How often is it that you can find a fallen tree that hasn’t been cleared away, much less creatively converted into a hangout spot ?

Albeit hidden, a hike here isn’t particularly difficult with a short and rather flat trail. Still, don’t forget to wear proper shoes and bring along some water. We’ll also recommend bringing an umbrella and raincoat in case it rains.

For more hiking and walking guides: 13 Best Essay Tips For JC Kids To Ace Their A Level General Paper Exams
I Visited A Senior Activity Centre Over The Weekend To Gather Love Stories, And Here...