Dine in a plane at Keramas Aero Park 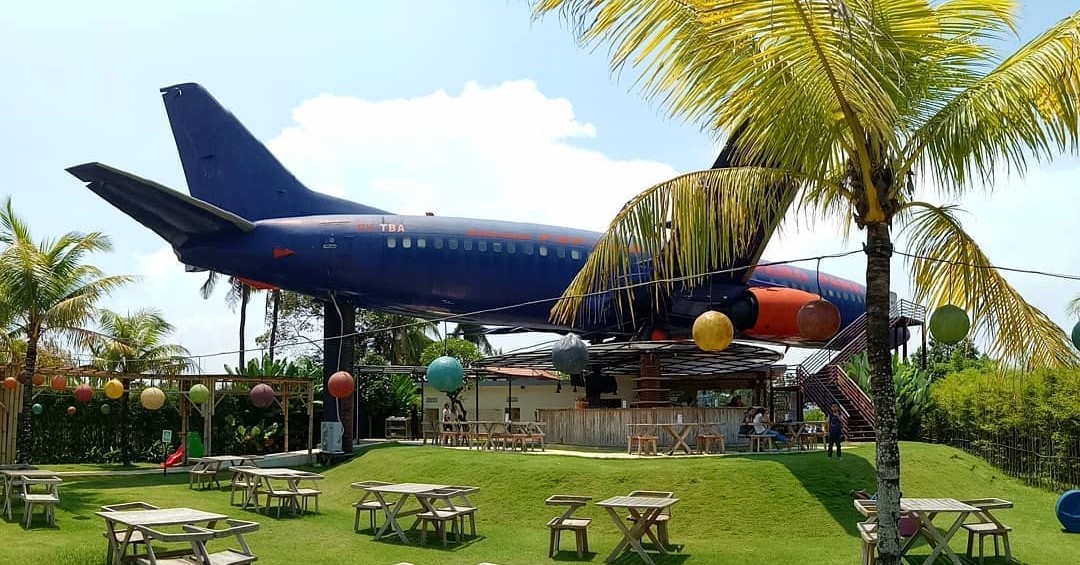 One rarely thinks of airplanes as anything more than a connector between you and your favourite far-flung holiday destinations. But Keramas Aero Park in Bali has managed to transform a single plane into a restaurant, complete with opportunities to explore the wing and the cockpit.

The abandoned Boeing 737-400 is located a 40-minute drive from Ubud hotspots like the Monkey Forest Sanctuary and the Campuhan Ridge Walk. Once dirty and dusty, the plane, nestled in the middle of a rice field overlooking the sea, has since been refurbished into a luxurious restaurant.

Getting to Keramas Aero Park 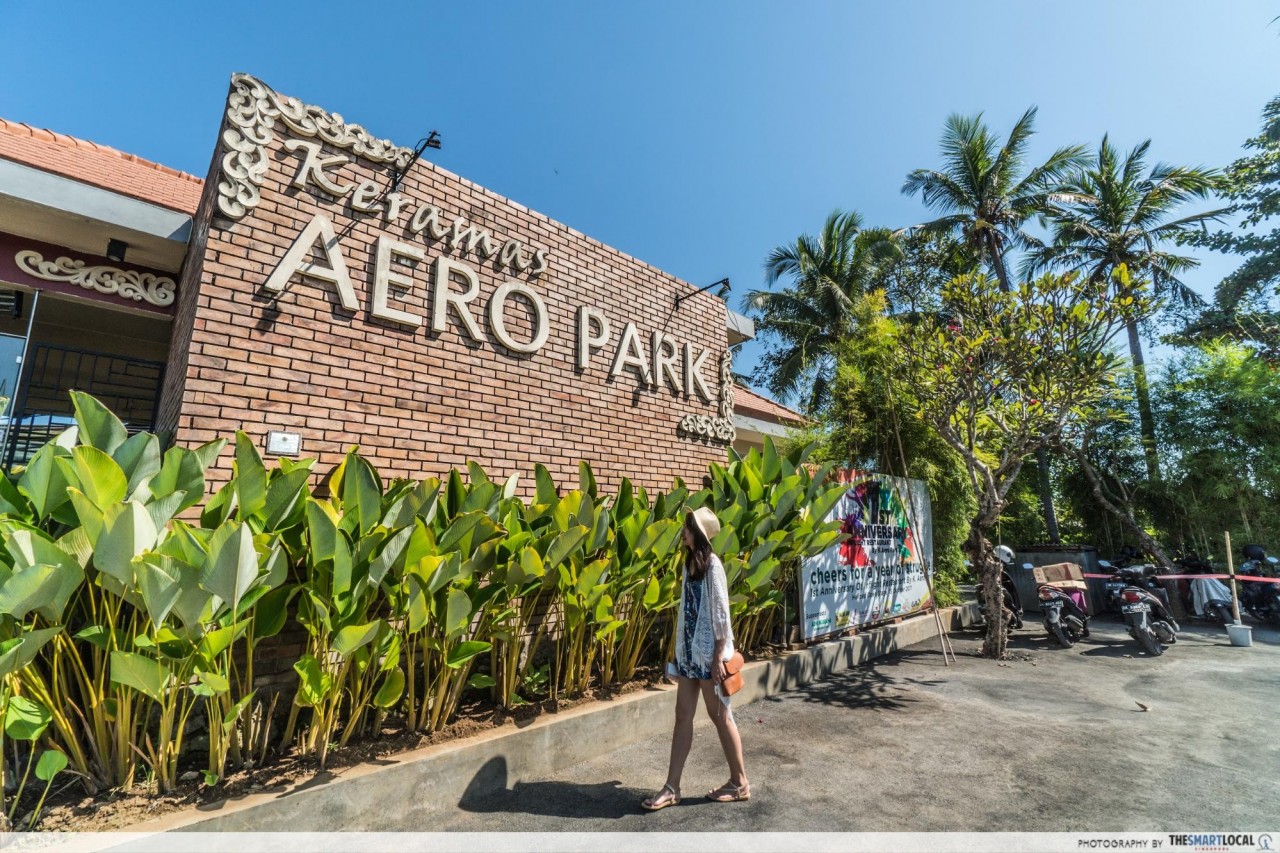 The best way to get to the park is by car. You can either hire a driver for the day, or hail a taxi – both of which are equally easy in Bali. If you trust your navigation skills, you can even rent a scooter and drive through the traffic yourself – which sometimes turns snail-like if you happen to get caught in a jam. 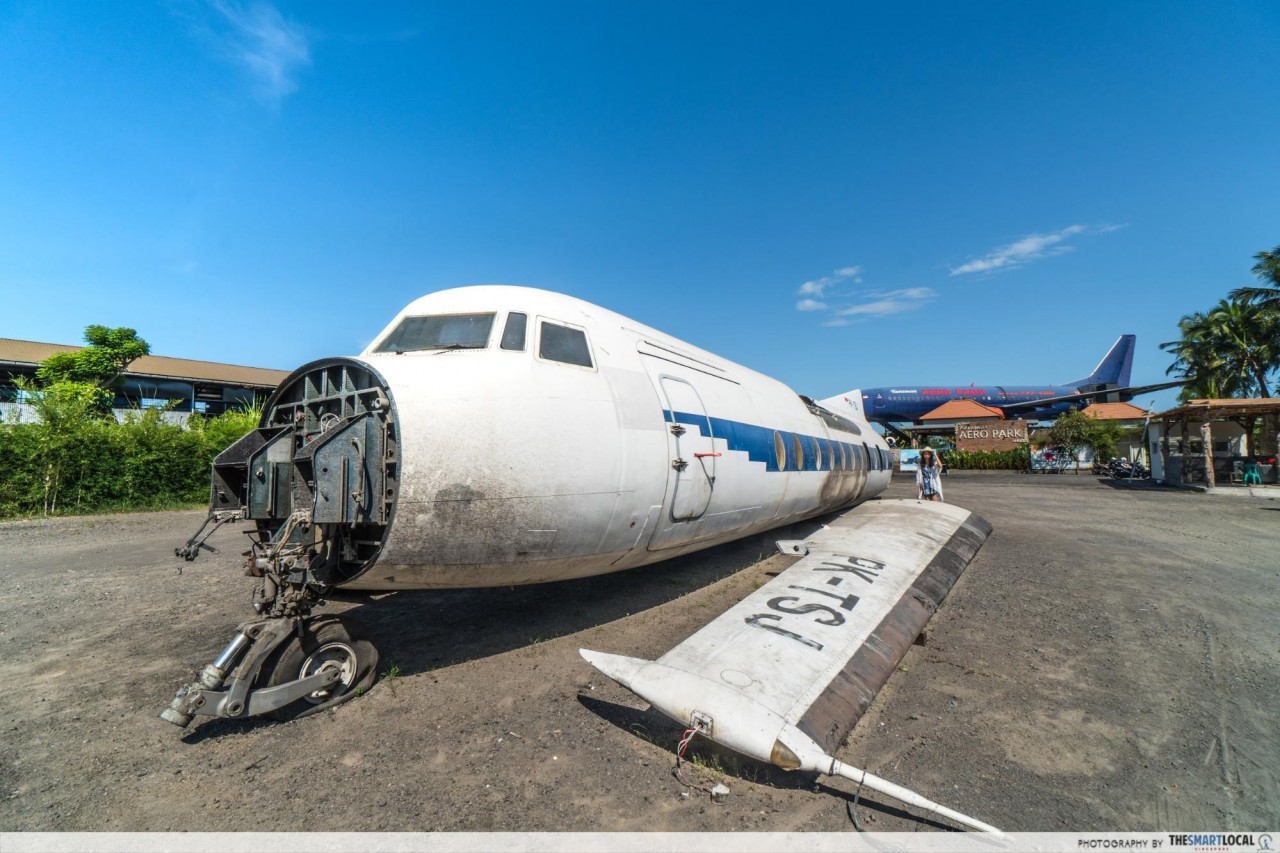 Upon arriving, you’ll be greeted with the sight of airplane ruins right outside the entrance of the restaurant.

You get to choose between dining in the plane or the garden. Seeing as the weather in Bali’s so hot one could probably fry an egg on the pavement, we opted to dine inside the plane, in the comfort of air-con. I imagine that at sunset, the garden area would become lively too, since the open space gives you an amazing view of the sunset over the fields. 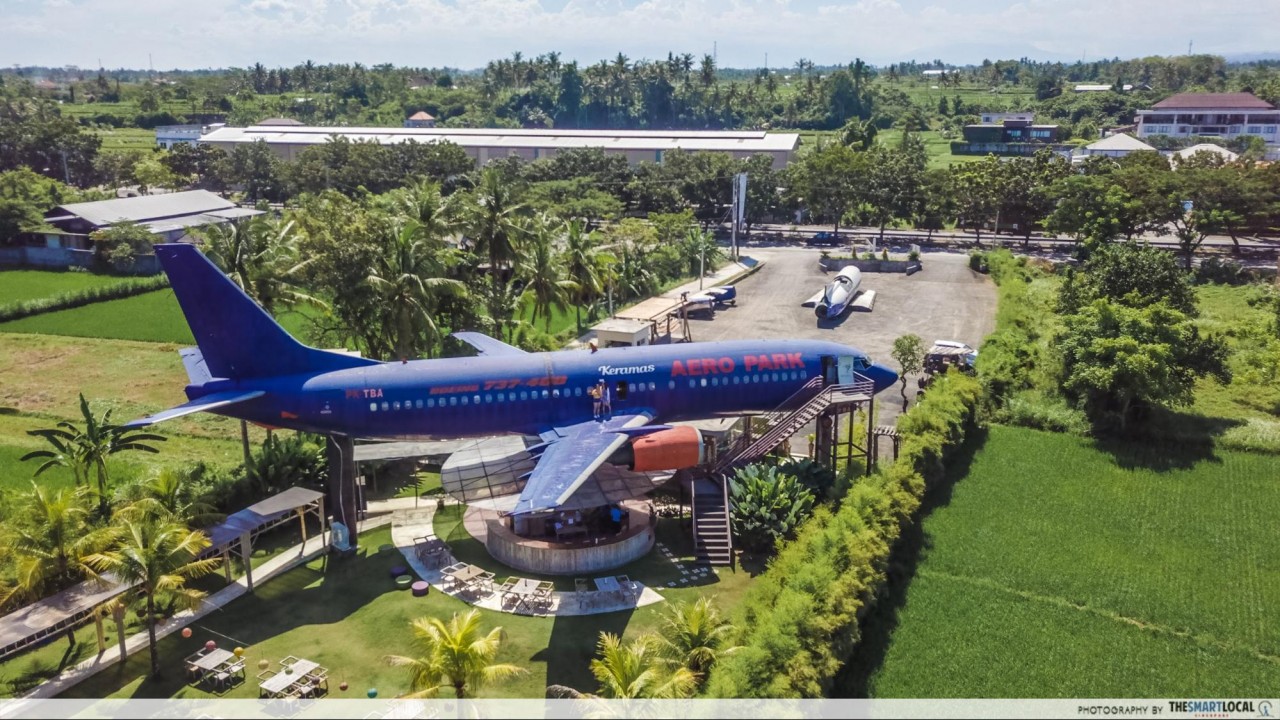 The plane is suspended in the air by steel stilts, two stories above ground.

The interior of the plane is lit up in cool blue fluorescence. We were greeted by waiters dressed in flight attendant attire, and the small seats you’d see on the usual airplane had been swapped out for large wooden tables and chairs set comfortably apart. 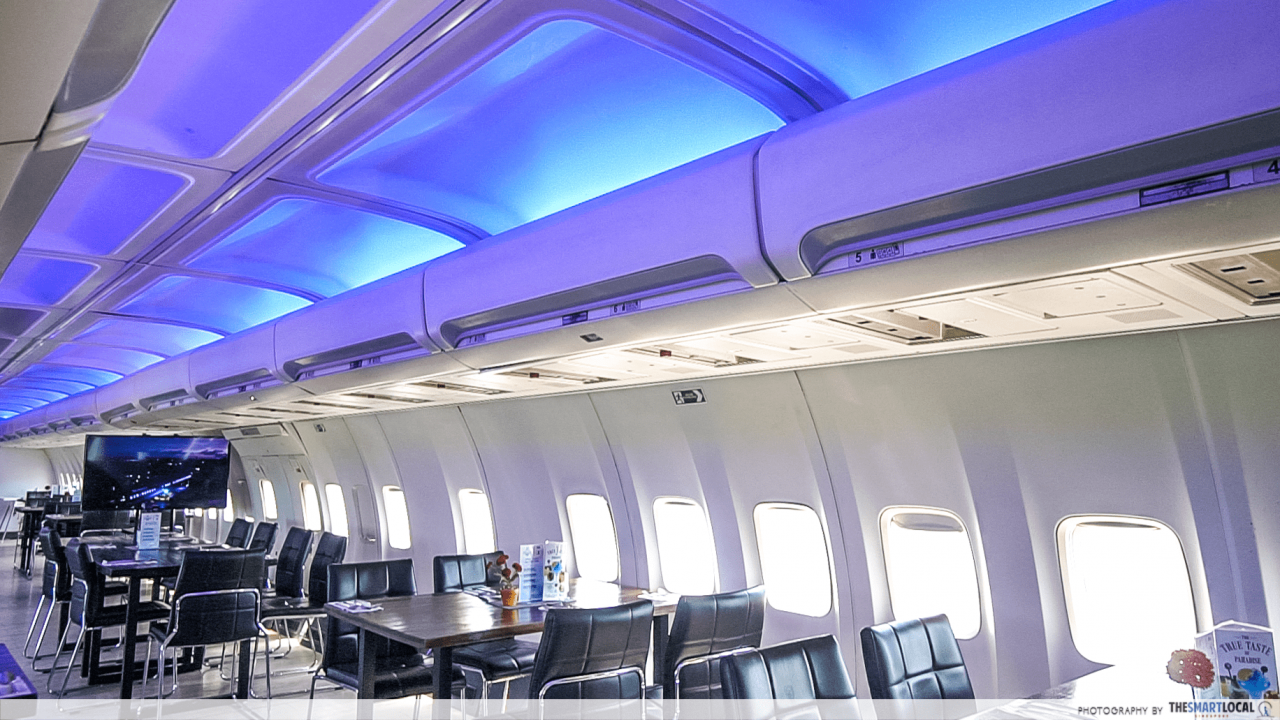 The baggage compartment is actually pretty low, so be careful not to knock your head as you take a seat! 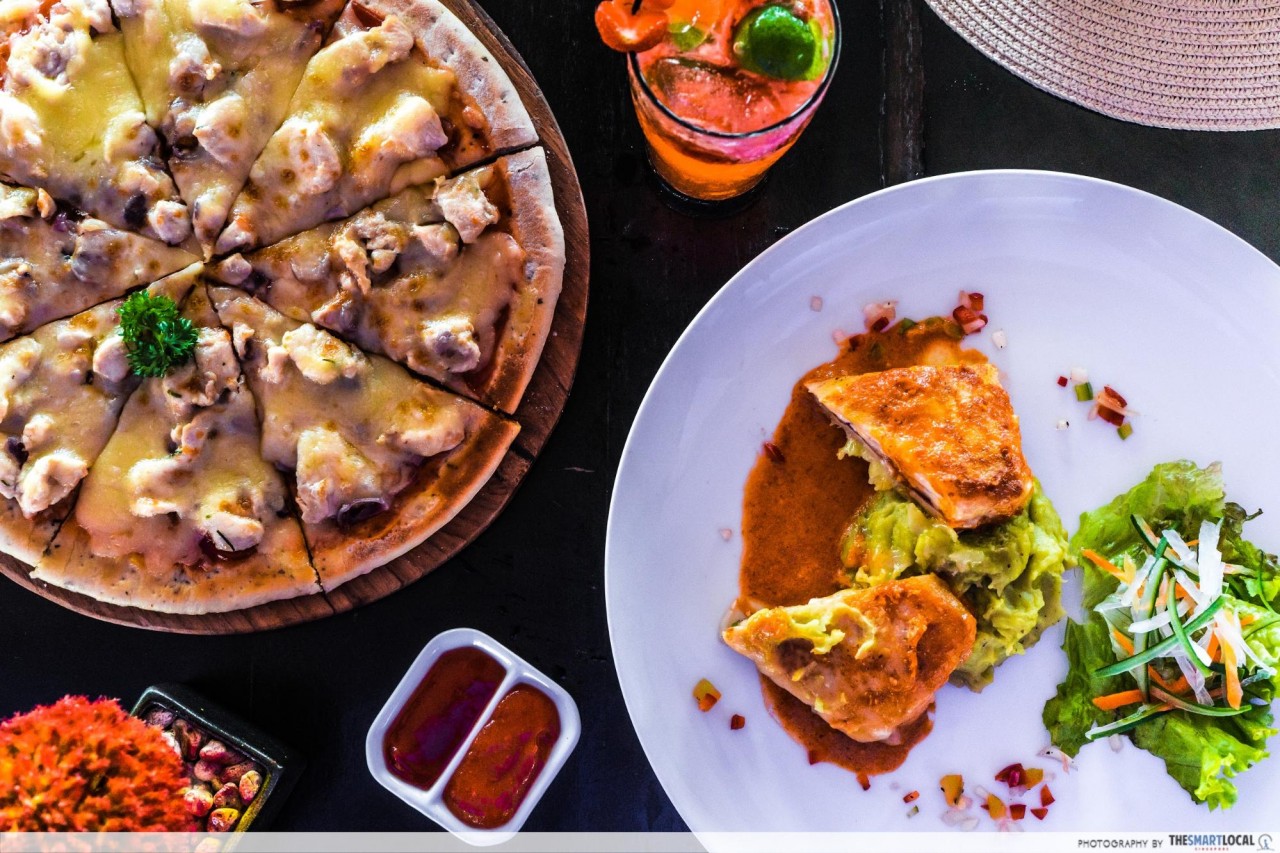 Chances are, when someone mentions airplane food, “variety” isn’t the first thing that comes to mind. But the menu at the Inflight Restaurant goes beyond the usual “chicken or beef?” dilemma flight stewards pose – there are a whopping 29 mains to choose from. 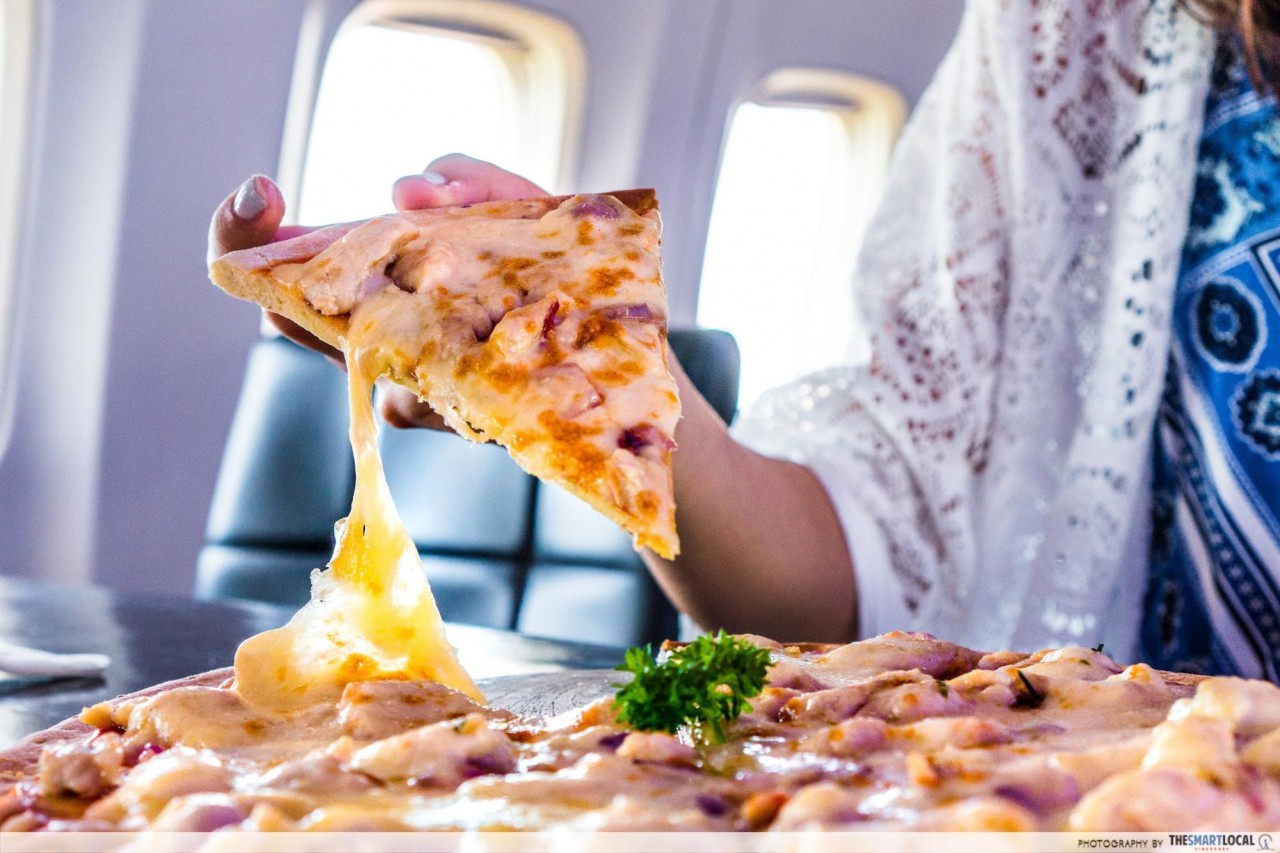 The pizza feeds around 4 people, and costs only about S$9.

We opted for the recommended Balinese Pizza (IDR 90,000, S$9). With a local twist to the Western favourite, this pizza had a base of Balinese sambal matah sauce, topped with chicken, onion, and mozzarella cheese. We found it a tad too salty, though the chicken chunks were generous and succulently juicy. 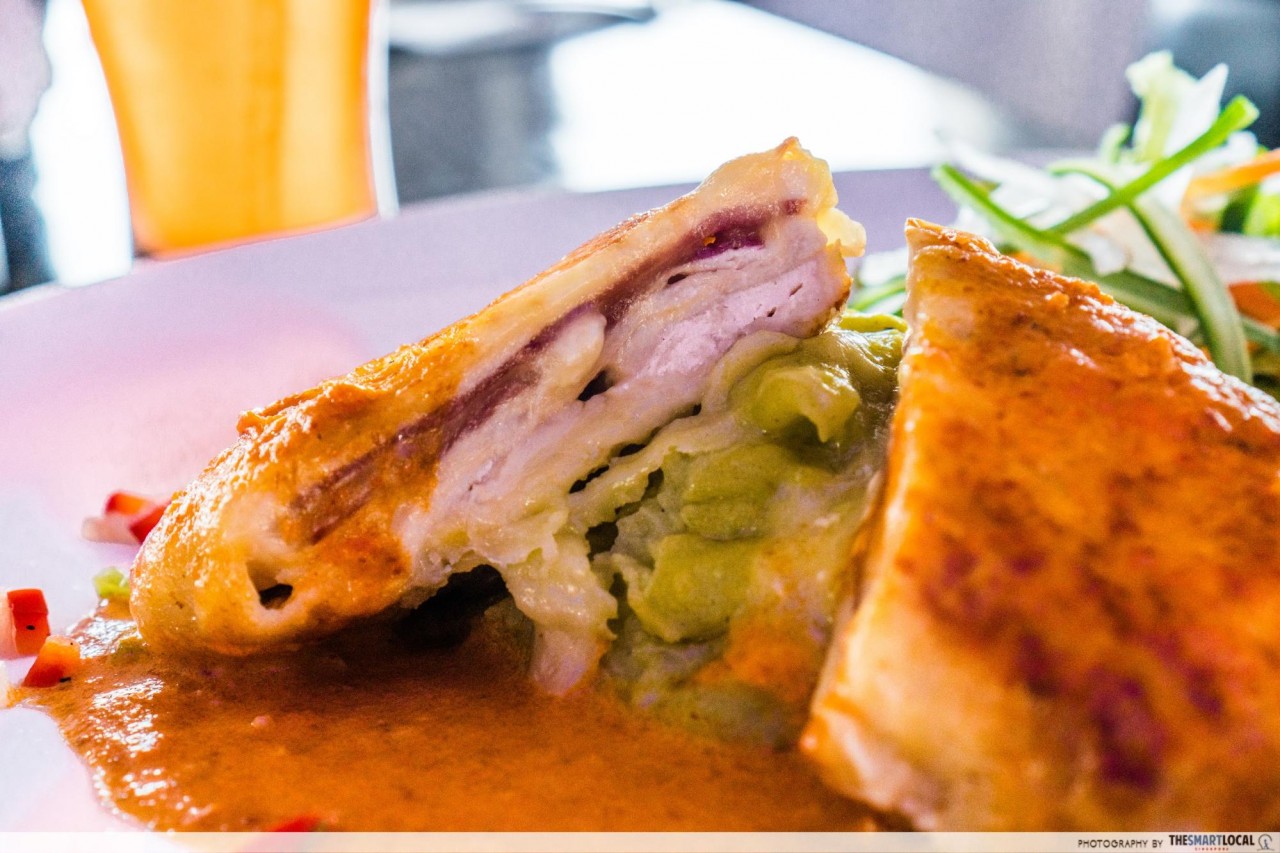 We also got the Chicken Melt (IDR 64,000, S$6.40), a hearty serving of pan-fried chicken breast stuffed with alternating layers of ham and cheese. Green mashed potato is served on the side, with the interesting colour coming from blended parsley. 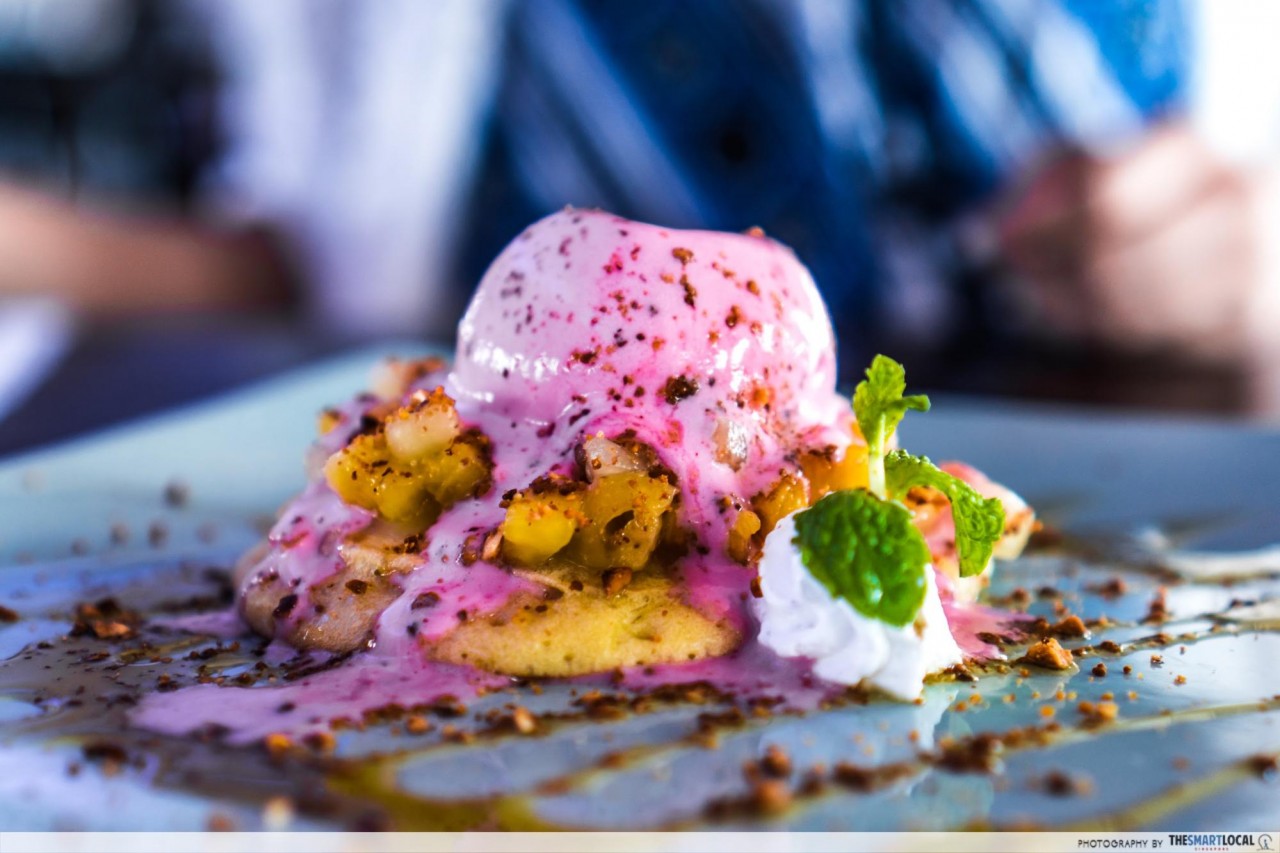 For dessert, we were introduced to the three-tiered Caramelised Fruit Pancake (IDR $34,000, S$3.40) – a buttermilk pancake with caramelised apple and a scoop of strawberry ice cream. The components weren’t overly sweet, so this ended off the meal well. The piping hot pancake melts the ice cream quickly, so dig in fast!

Stand on the wing of the plane 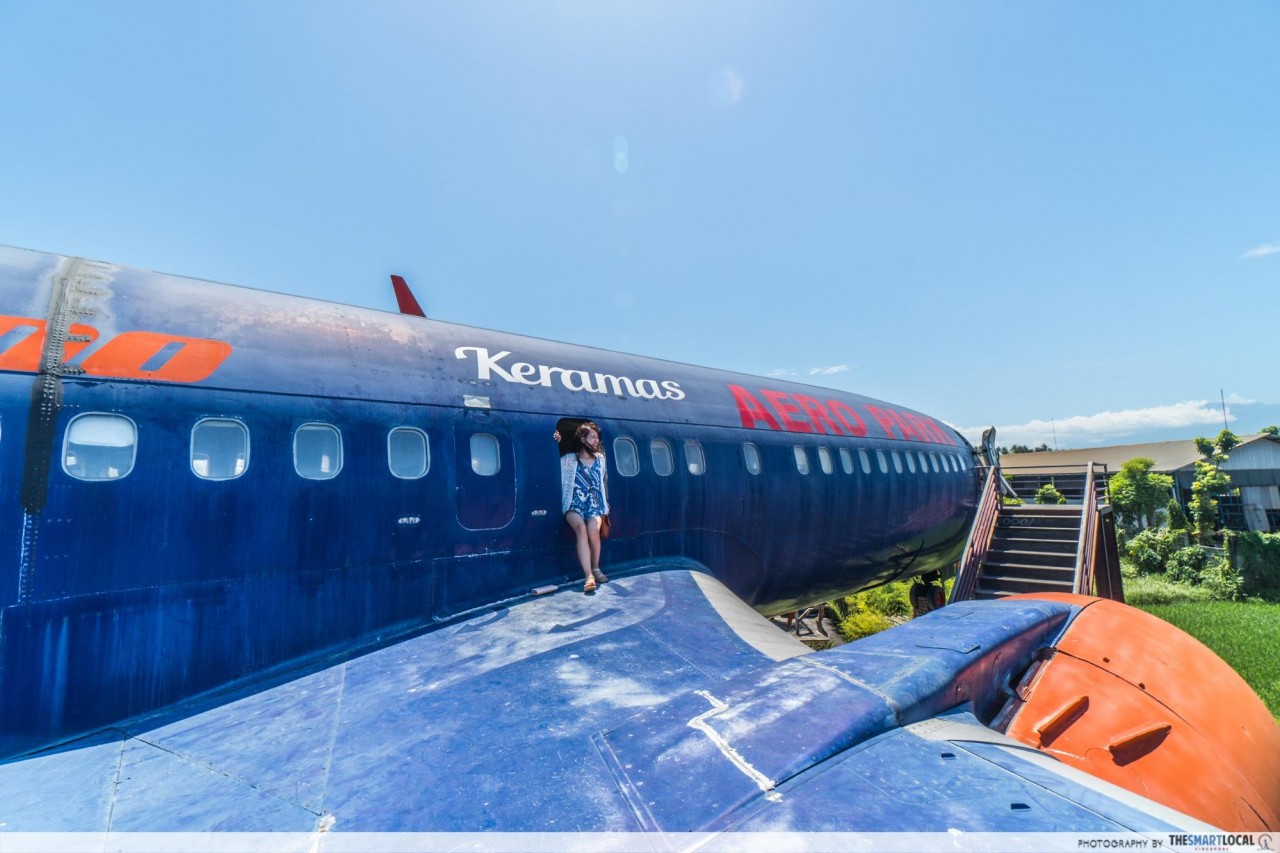 Here’s where things get exciting: the plane’s emergency door has been taken off its hinges, so the restaurant leads straight out to the wing of the plane – which you can actually stand on.

Daredevils unfazed by heights, here’s your chance to take the best “I’m in paradise” photo of all time. Head out as far as you dare to get the best view of the acres of green below, and the crashing ocean waves in the distance. 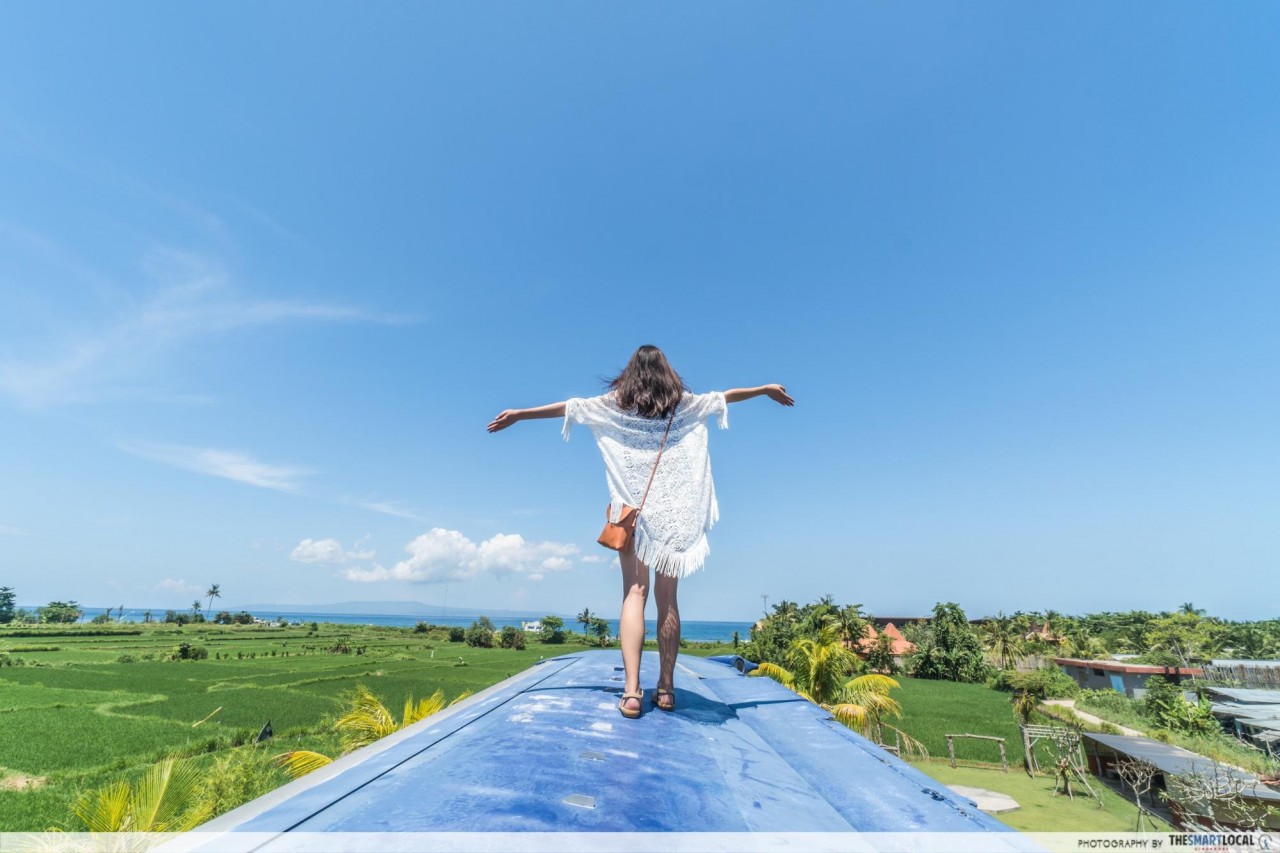 If you’ve got acrophobia, you might wanna skip this.

Safety first, though! Don’t stand on the very tip of the plane, since it’s narrower there. My legs were actually shaking a bit from nerves. Brash movements make the wing wobble as you head out to the tip, so walk gently and don’t jump around. 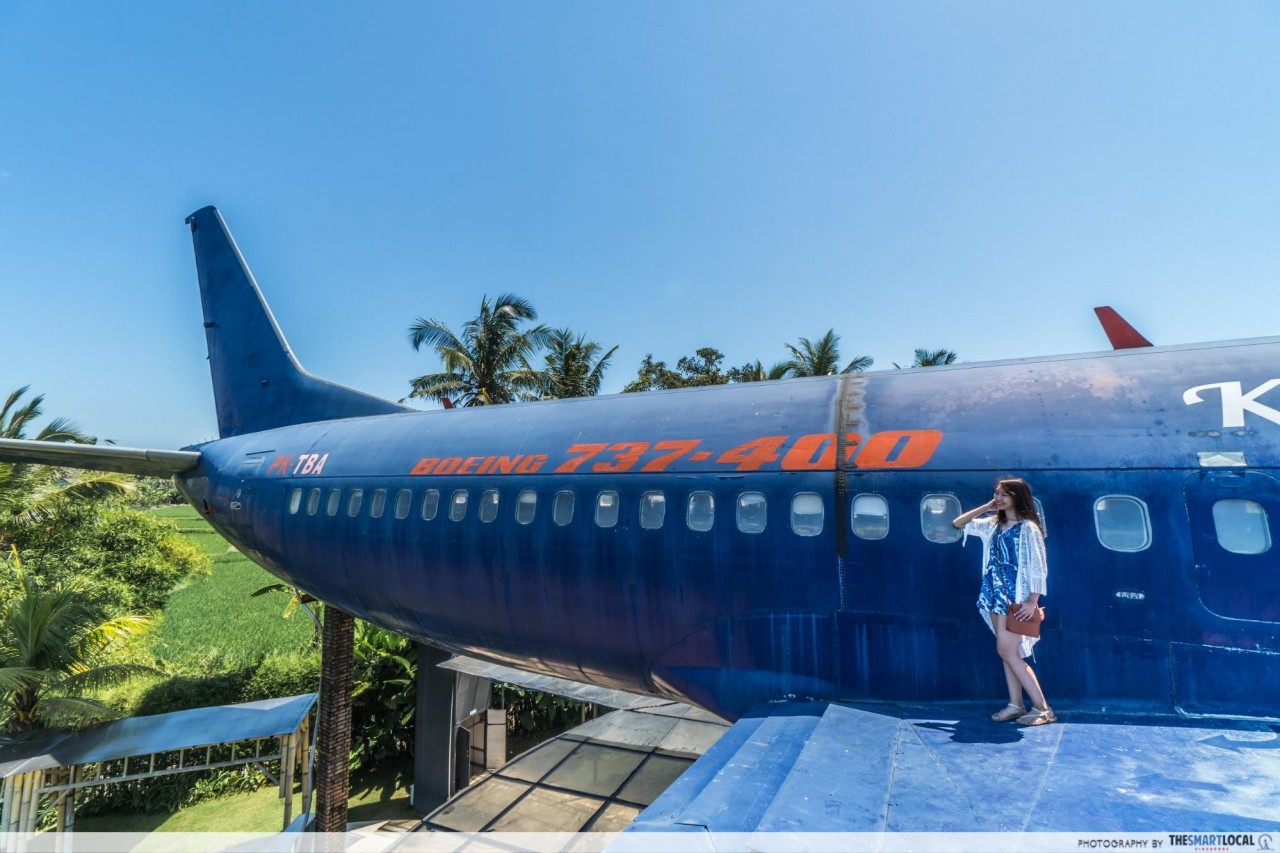 Those scared of heights can remain at the base of the wing, and still get a nice picture against the vivid colours of the plane.

That being said, the wing of the plane is quite broad, and can comfortably accommodate four to five people standing side by side at its base. You’ll still want to keep to the centre, though – our photographer stepped briefly on the maneuvering flap of the wing, which immediately hinged downwards and almost threw her off balance.

Wanderlusters, fulfill your dreams by playing pilot in the plane’s cockpit. Some of the plane’s actual controls remain untouched, although most of the toggles have been replaced with a printed canvas. They even provide you with a captain’s peaked cap that you can wear to look the part. 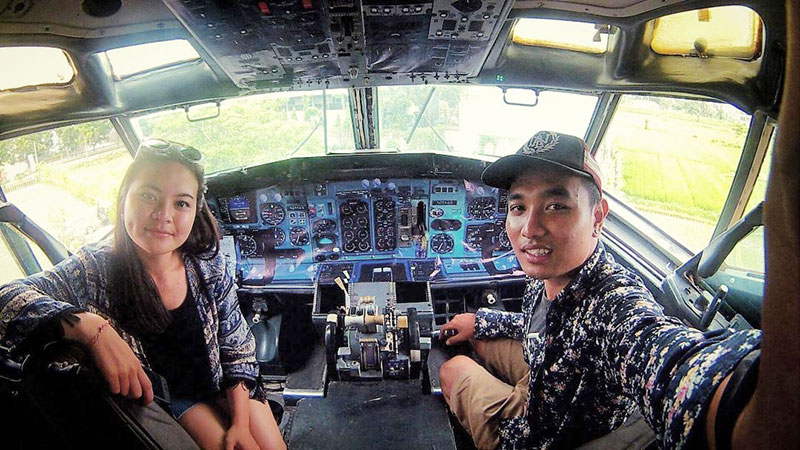 Open-air dining at the Aero Garden 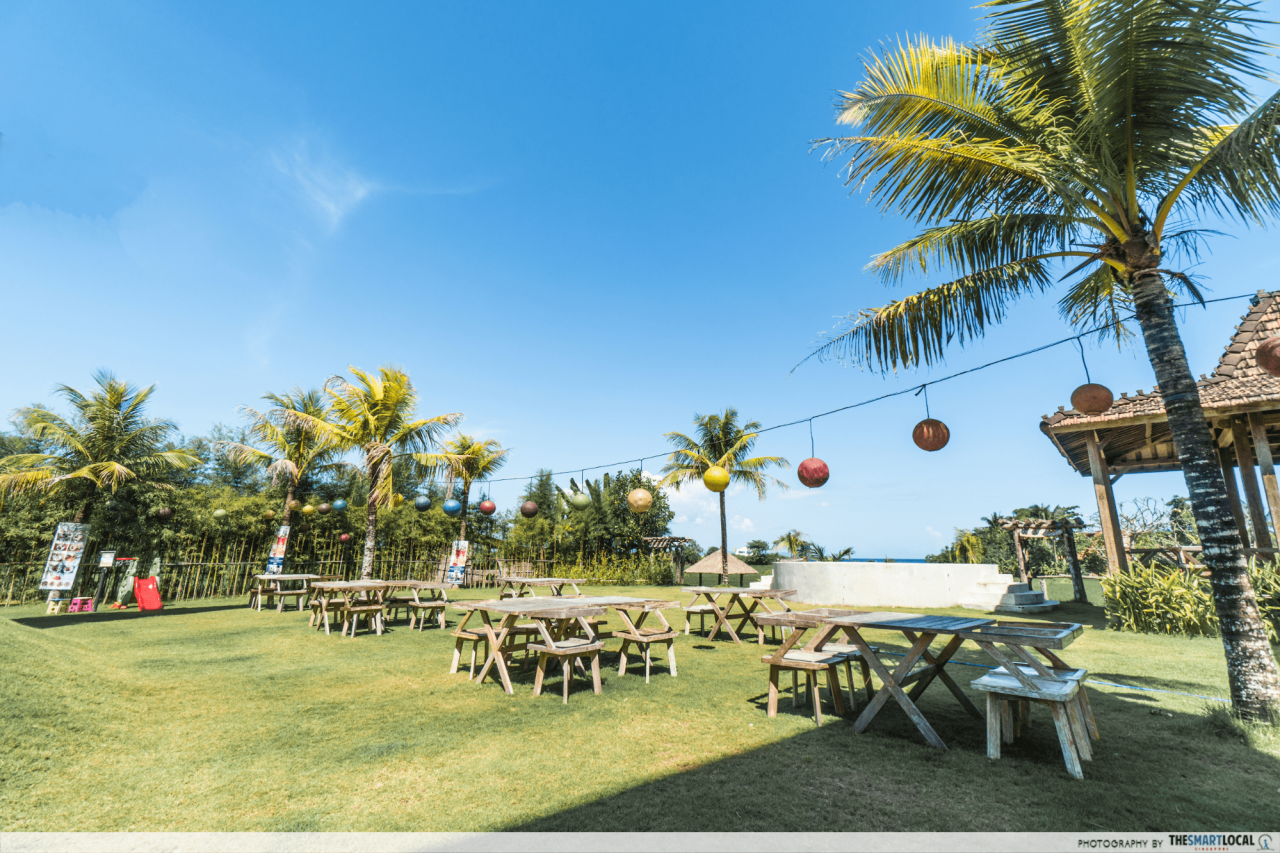 Down on the ground, it’s a different playing field altogether. The Aero Garden features open-air dining in front of the Helipad, an open stage where performances may be held.

Private rice field with a swing made from logs 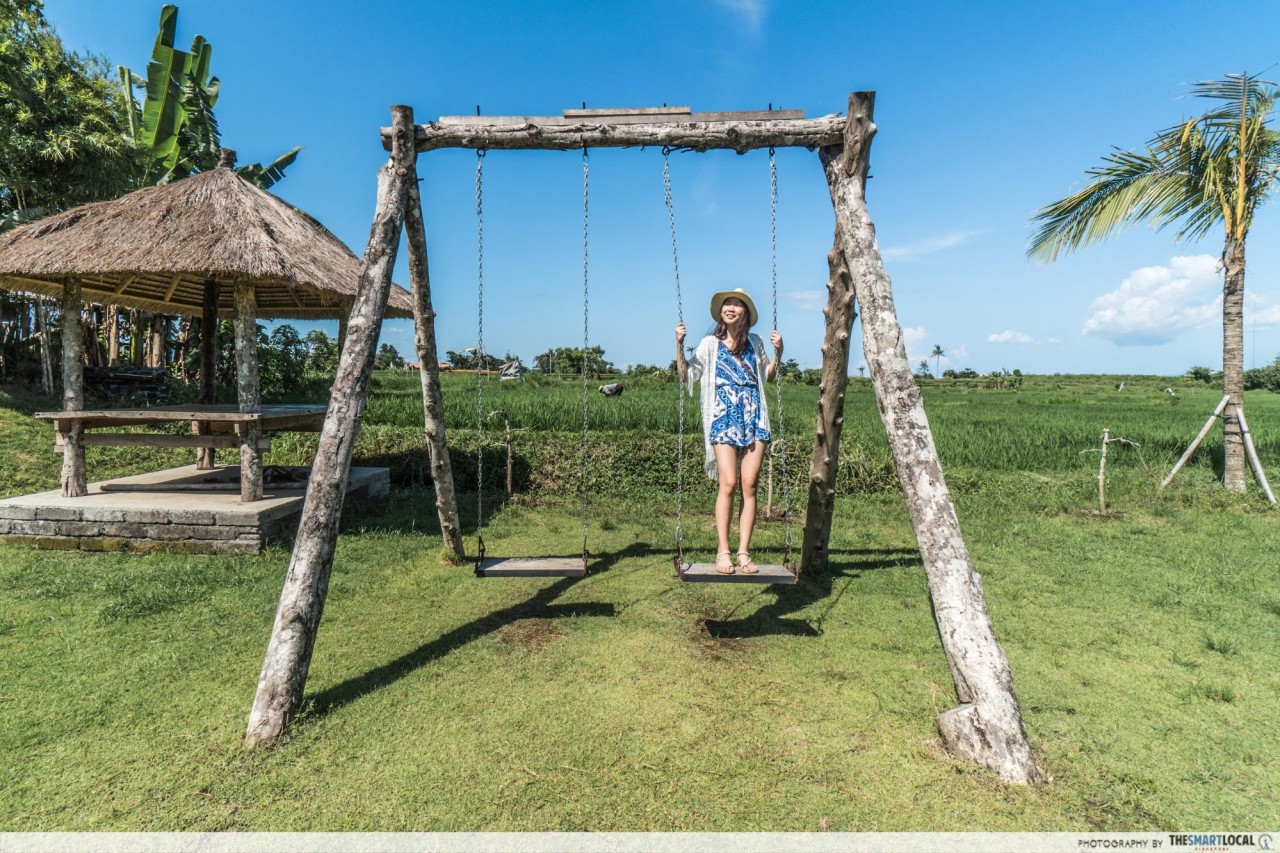 Walking further down the garden space brings you to a little playground next to the rice fields, decked out with swings. Though the poles of the swings are roughly hewn from logs, the planks are smooth and splinter-free. And the chains aren’t made of metal, so you can hold onto them in the glaring sun without burning your palms. 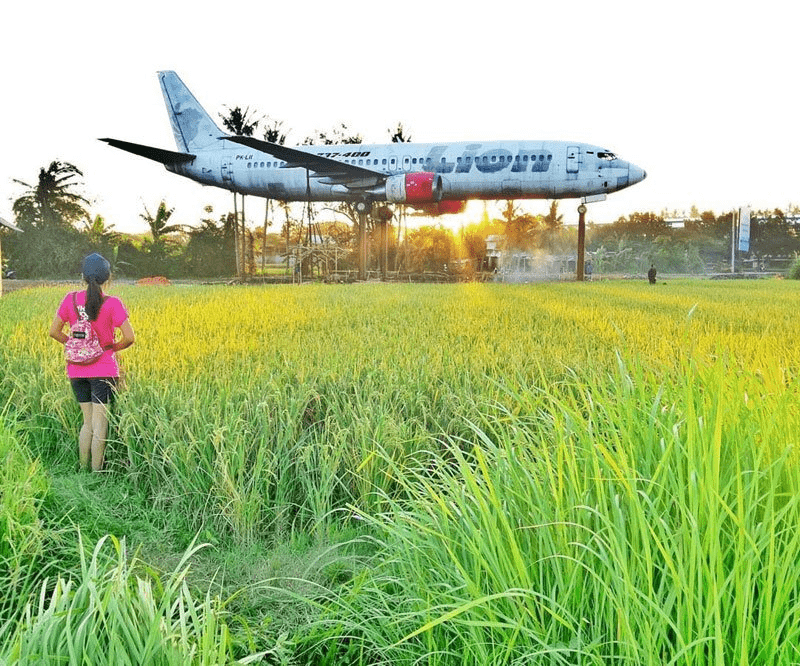 Image credit: Trip
You can also take a walk through the private rice field on your way to Keramas beach, a 10 minute walk away from the park.

Grab drinks at the Ground Bar 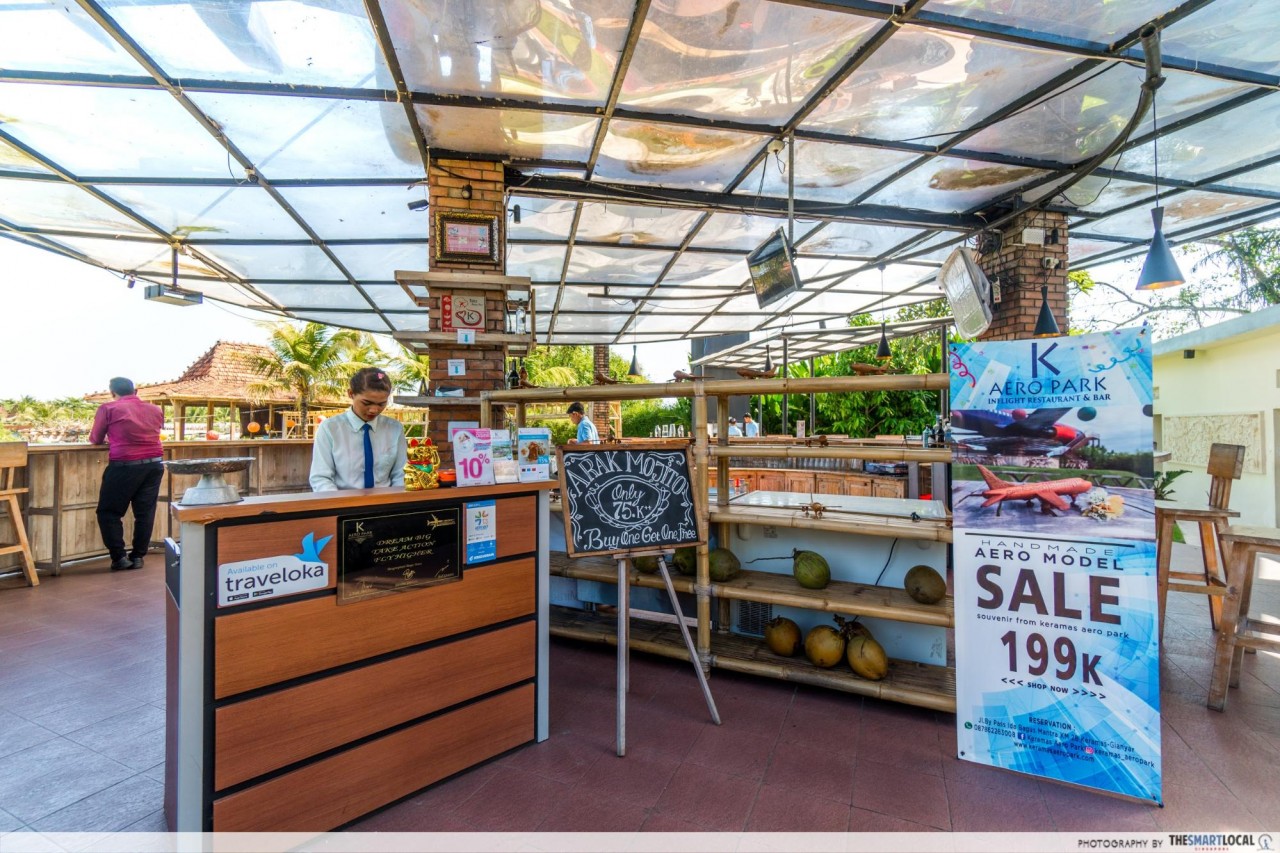 If you come in the evening, the Ground Bar serves alcohol at cheap prices. The local bestselling beer, Bintang, is priced at IDR 29,000 (S$2.90), while fancier cocktails with rum and vodka start from IDR 80,000 (S$8). 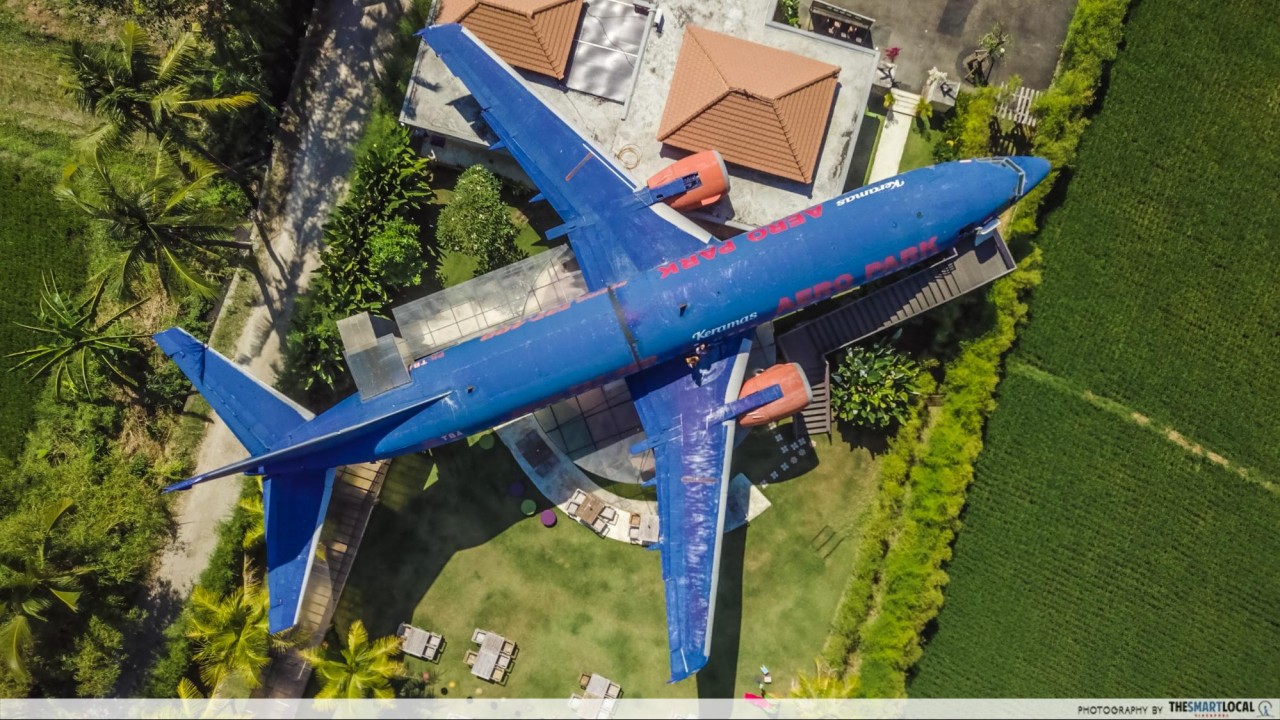 All in all, there are lots of places within the park to explore. I’d say working this restaurant into our itinerary was a big plus, especially with the experiences of “in-flight” dining and standing on the wing of the plane, which you can’t get anywhere else.

The place stayed rather empty during lunchtime – probably because we visited during the off-peak season. It’s still best to make a reservation, though!

Chinatown & Tanjong Pagar Instawalk - 9 Landmarks In The Neighbourhood That Bridge The Old & New
ONE Championship: Get 25% Off Tickets To This Martial Arts Tournament Happening On 18 May