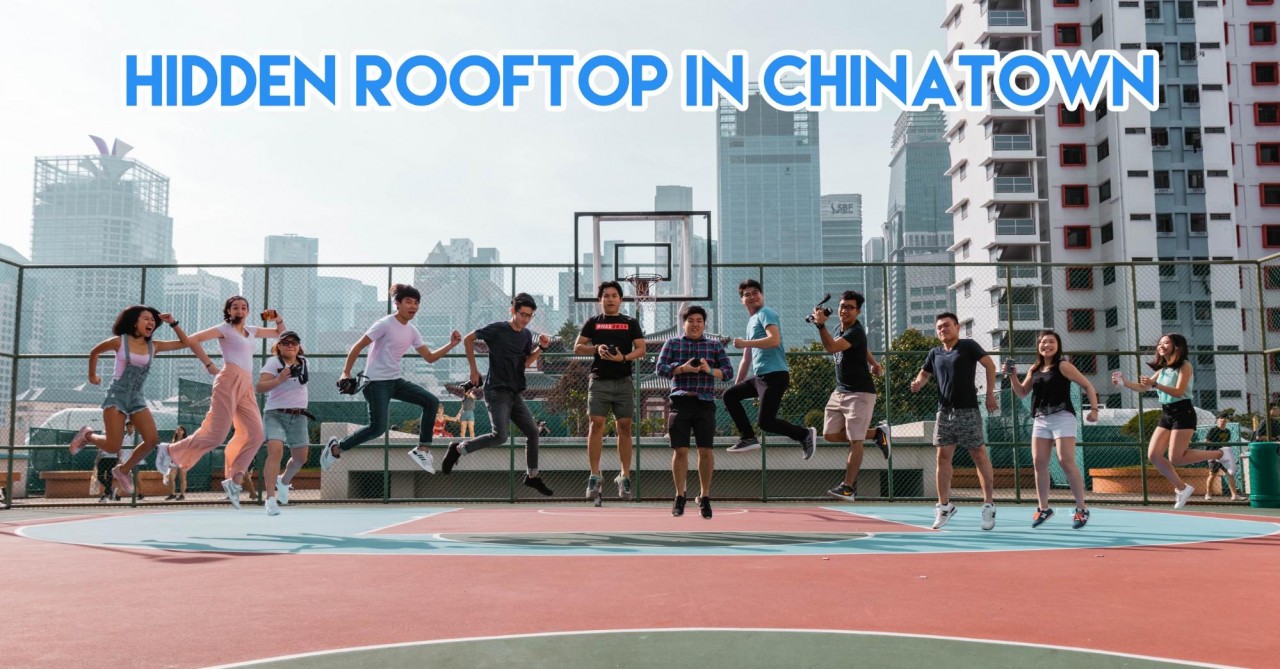 There’re tonnes of stuff to do on our sunny little island, so Chinatown and Tanjong Pagar might not be at the top of your to-do list when it comes to making weekend plans.

The Smart Local crew decided to find out if these places were more than just tourist hotspots and offices. Together with the Ministry of National Development (MND) and Urban Redevelopment Authority (URA), we went for our first #Instawalk of the year on 21st April. 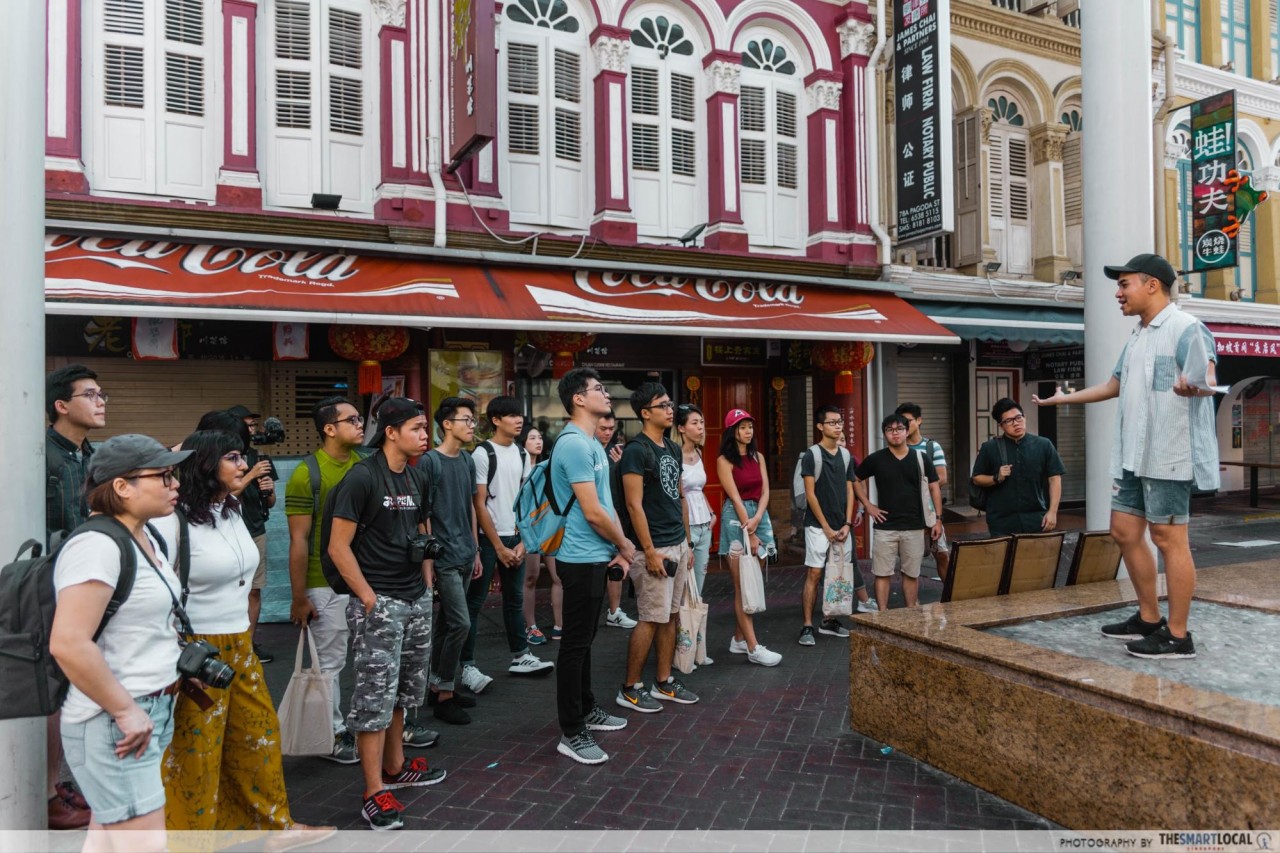 0900: Our merry band of #Instawalkers were eager to kick off their adventure. We gathered bright and early outside Chinatown MRT station and after a short introduction and briefing, we set off! 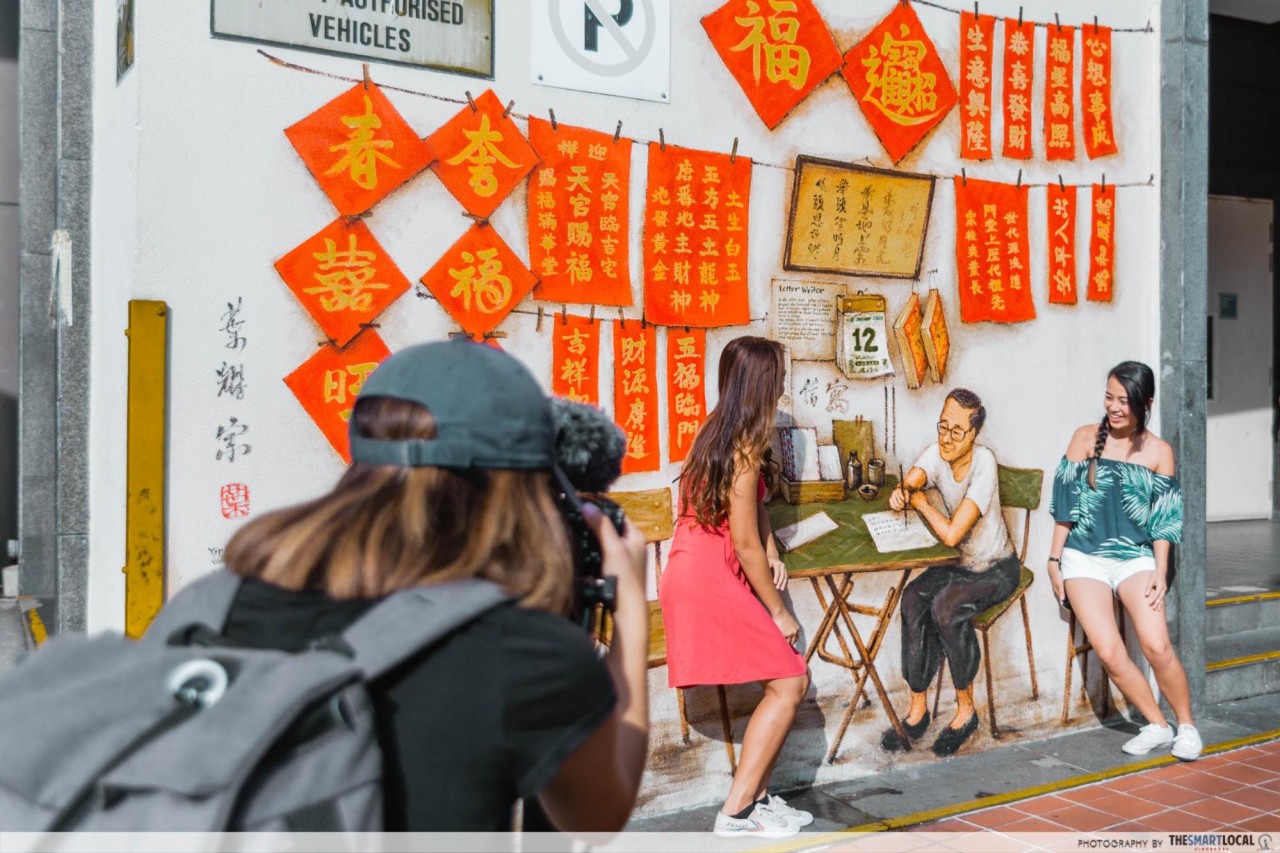 0910: Our first stop was just an alley away at 336 Smith St. Titled Letter Writer, this mural by Yip Yew Chong was dedicated to the letter writers from back in the day, who helped Chinese migrants living in Singapore pen letters to their loved ones back home.

This mural came to life thanks to the LocoMole app, which uses augmented reality to add a whole new dimension to the scene. Our participants could see the animated couplets swaying in the wind, and even little mice scurrying around the letter writer’s feet.

0920: Here’s a little nugget of information for ya: our next stop was located around Sago Lane, once known for its street of “death houses” where terminally-ill patients would go to await their fate. Most patients were early Chinese immigrants, and it was believed that these death houses gave them a peaceful final resting place where they could get a proper ceremonial send-off as well.

The site was cleared in the 1960s and replaced by what we now know as Chinatown Complex. This brought together public housing, a wet market, shopping, recreational facilities and a massive hawker centre – the biggest in Singapore in fact!

After clocking in some morning exercise with four flights of stairs, we arrived at the roof of the building. 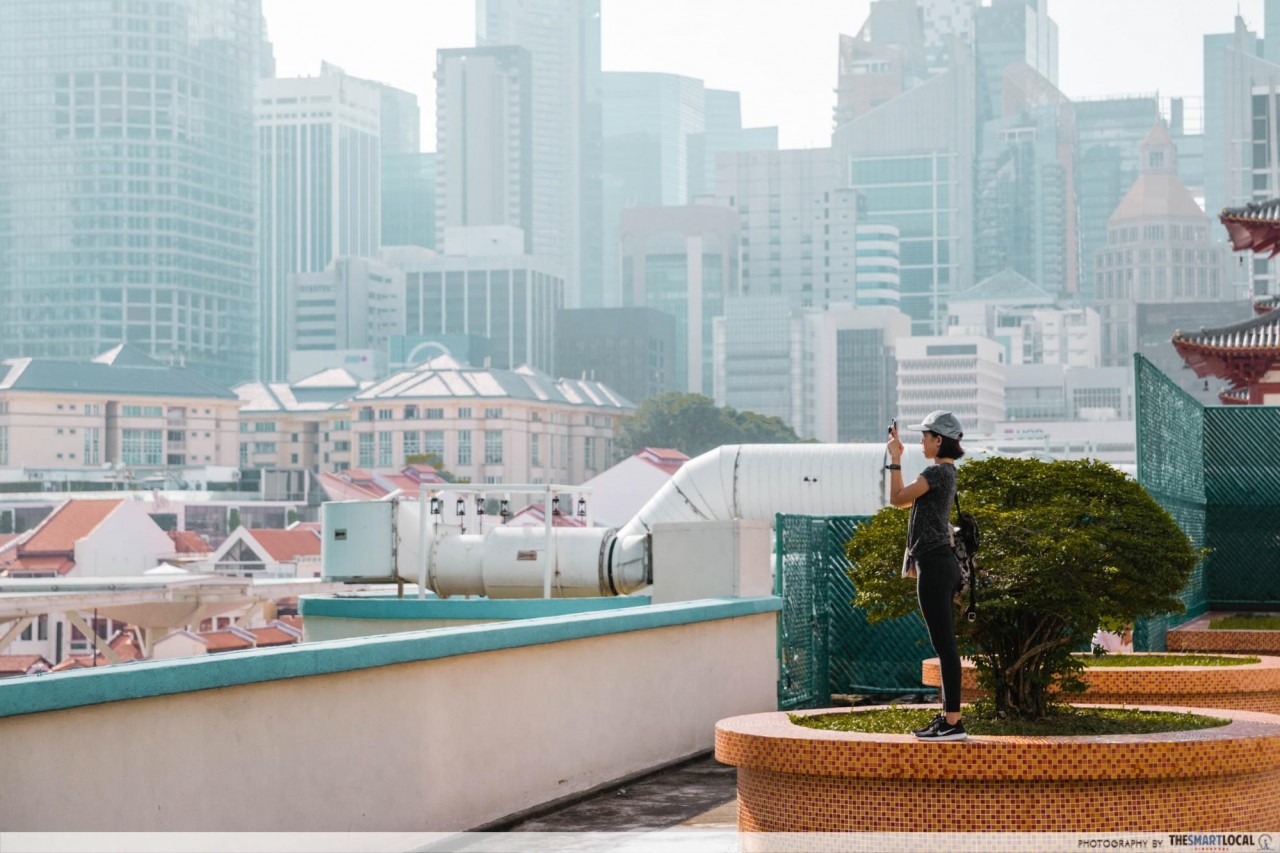 Our themes for this Instawalk were Life, Colour and Tradition, and the rooftop was the perfect backdrop for a photo-op! This was the first time most of our Instawalkers were visiting this ultra ‘grammable rooftop, which had a stunning view of the city’s skyline against the pastel basketball court. Needless to say, this got everyone snapping pics straight away. 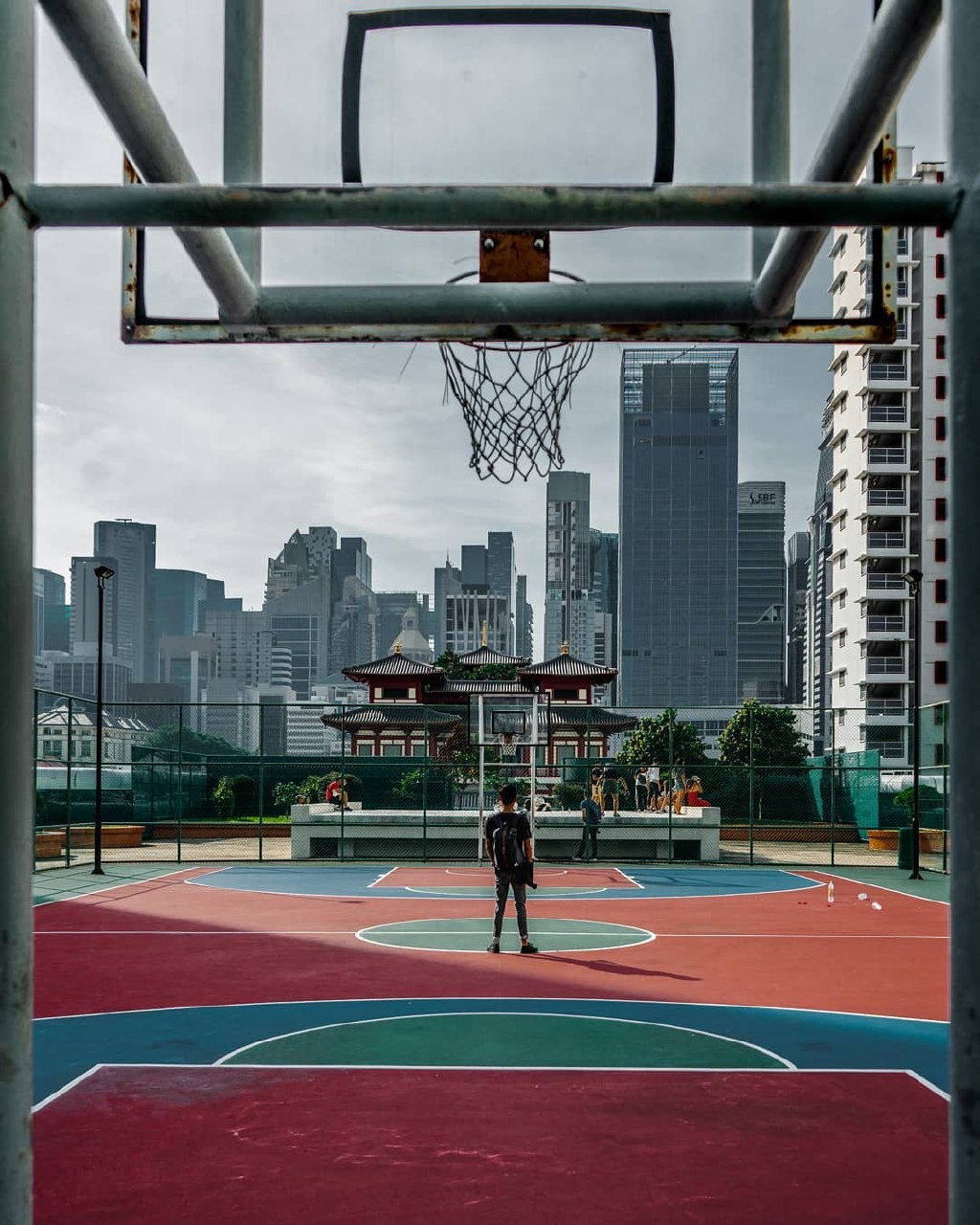 There was a prize for the best group photograph too, and some of the teams took advantage of the space to get some pretty snazzy shots. 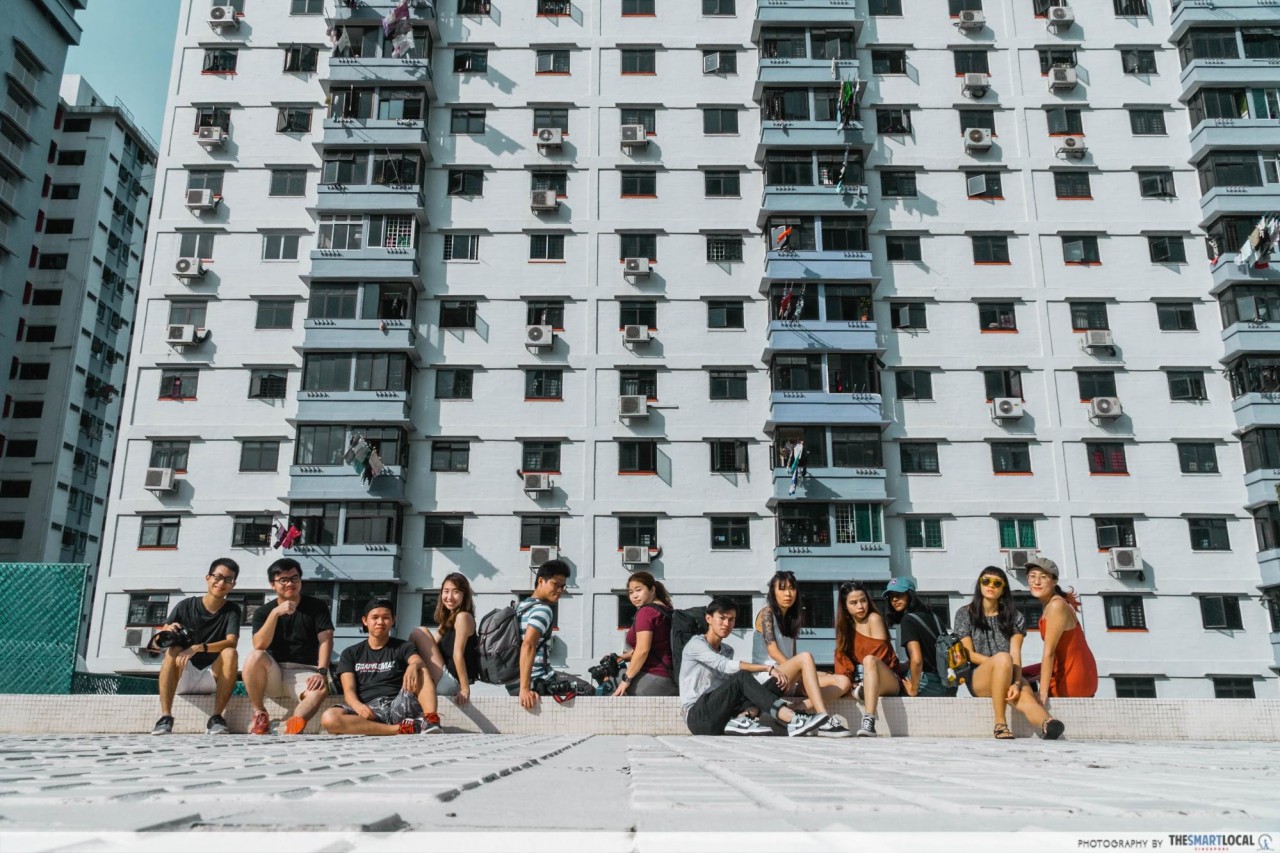 0950: We headed to the Buddha Tooth Relic Temple and Museum next, located right beside Chinatown Complex. 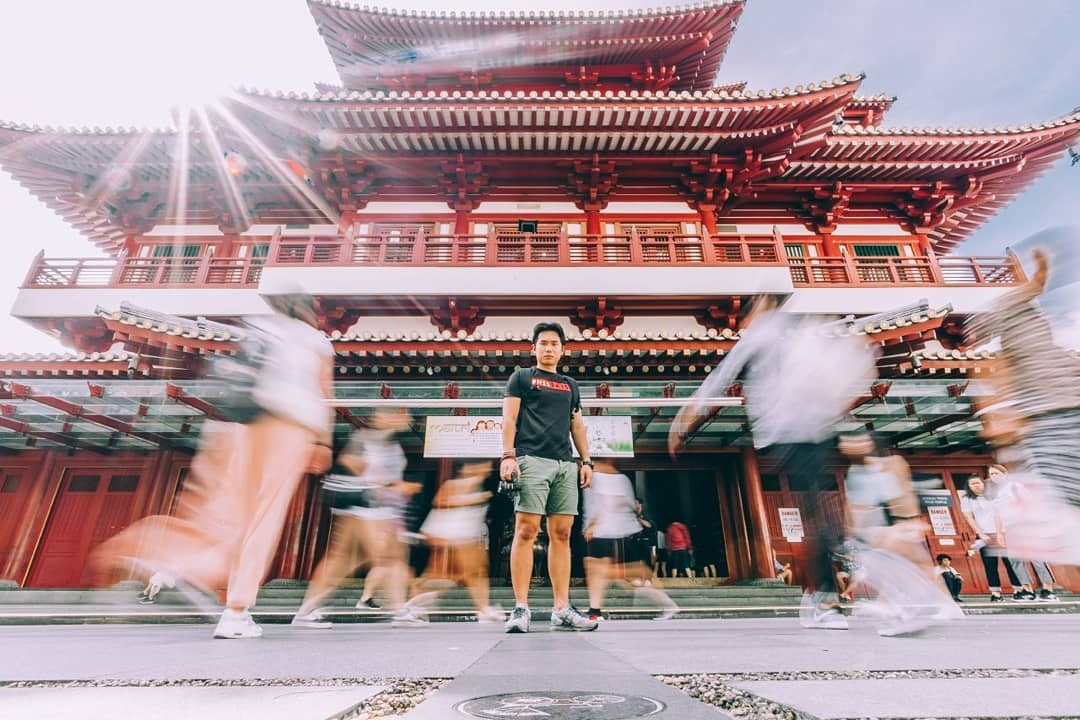 Our participants got pretty creative with their camera angles, giving us new perspectives on the traditional building. 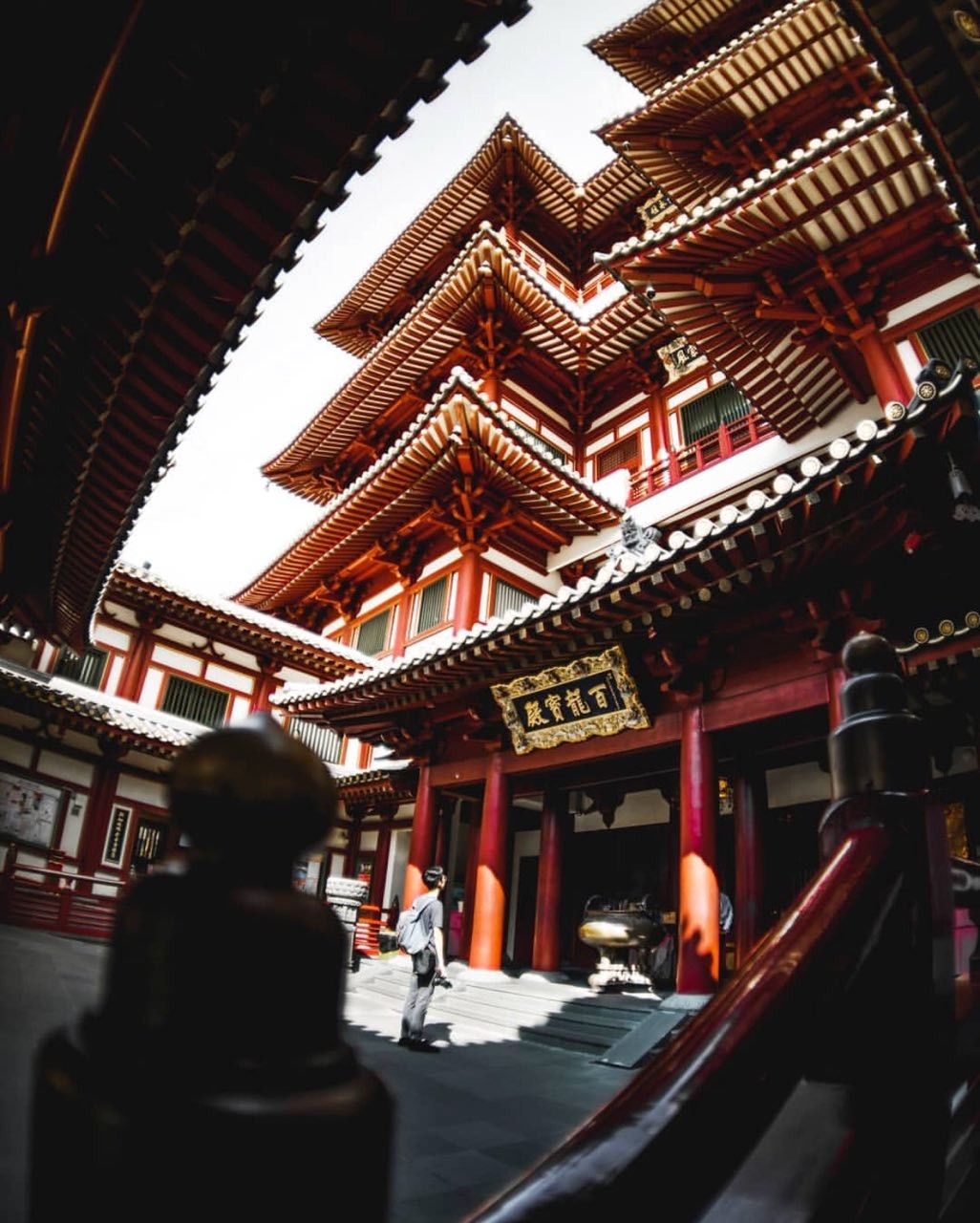 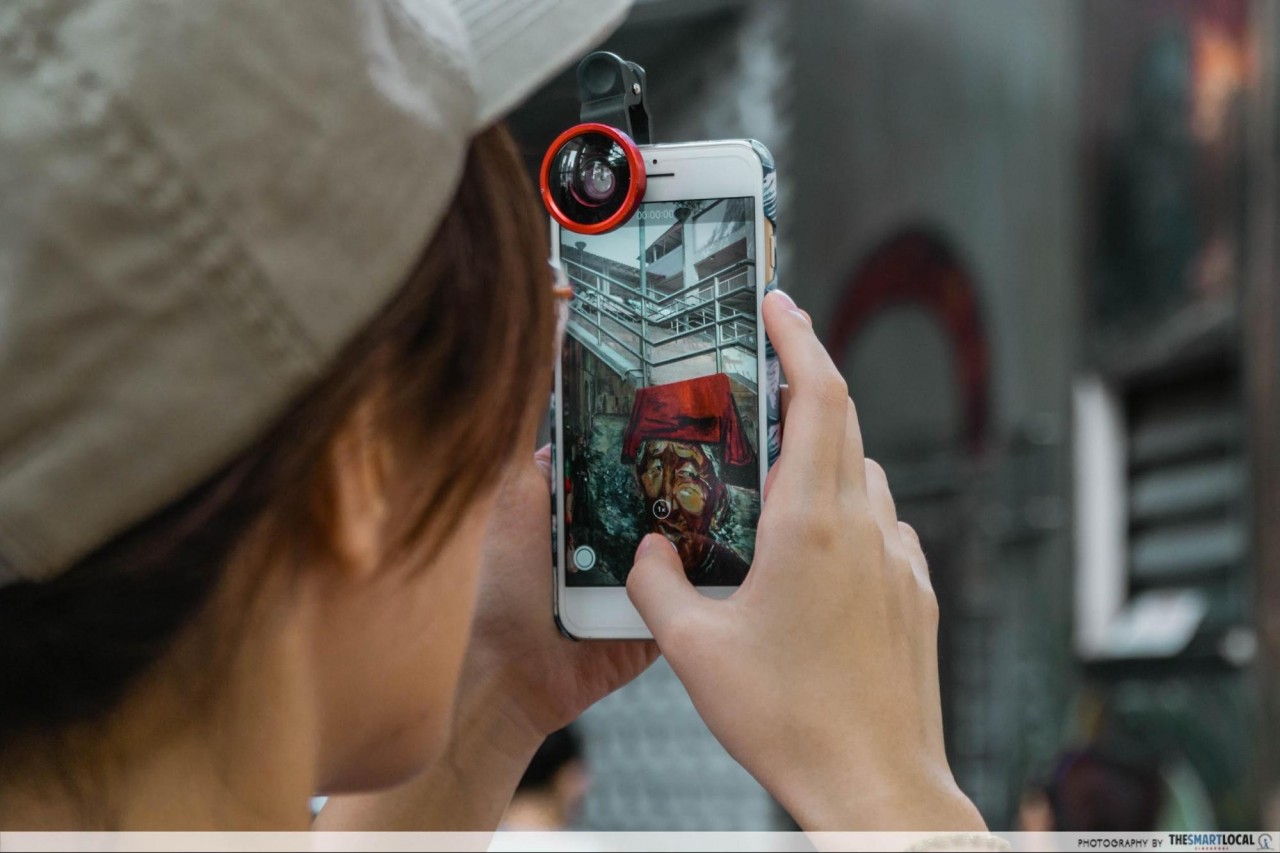 We also noticed vibrant murals by the temple along Banda Street, depicting life in Chinatown’s past and present. Given how well they were drawn, we expected them to be the works of a professional street artist – so imagine everyone’s surprise when we learnt that these murals were painted by volunteers and the Residents’ Committee!

1015: Our next stop was Sri Mariamman Temple, the oldest Hindu temple in Singapore. It was established way back in 1827, and reconstructed with bricks in 1843. This building was the reason for the names of the streets which flanked it – Pagoda Street and Temple Street.

Had we stopped by later in the year, we would have witnessed a huge 3m long fire pit. Why? The temple also serves as the end point for the customary 5km walk during the annual fire-walking festival, Theemithi. 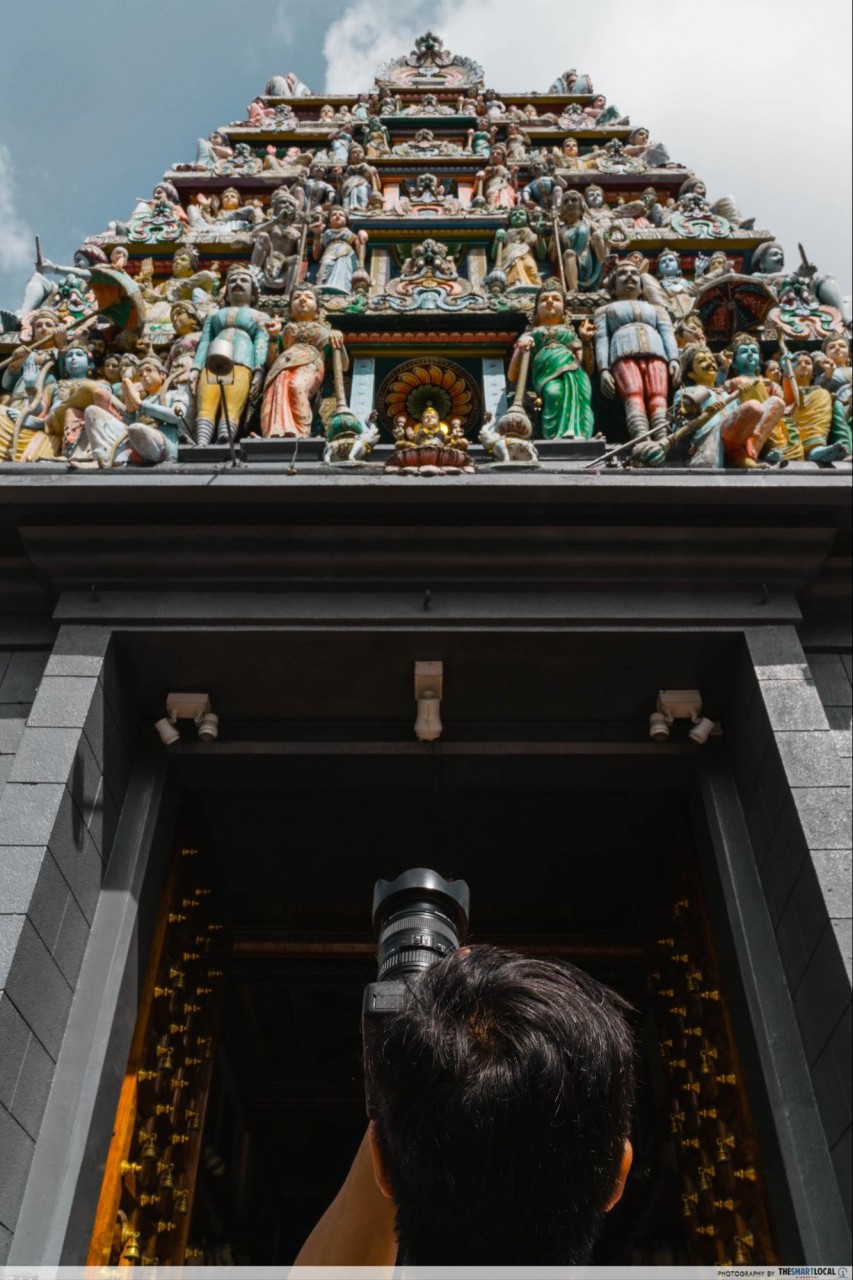 The temple is also open to anyone walking in to learn more about its historical significance and the Hindu culture.

1020: Jamae Mosque is right next to Sri Mariamman Temple, highlighting how different religions coexist harmoniously in Singapore. This is one of the oldest mosques in Singapore, and it’s known as Chulia Mosque to the Tamil-Muslim population – a reminder of the large population of Chulia immigrants and their role in the development of colonial Singapore. 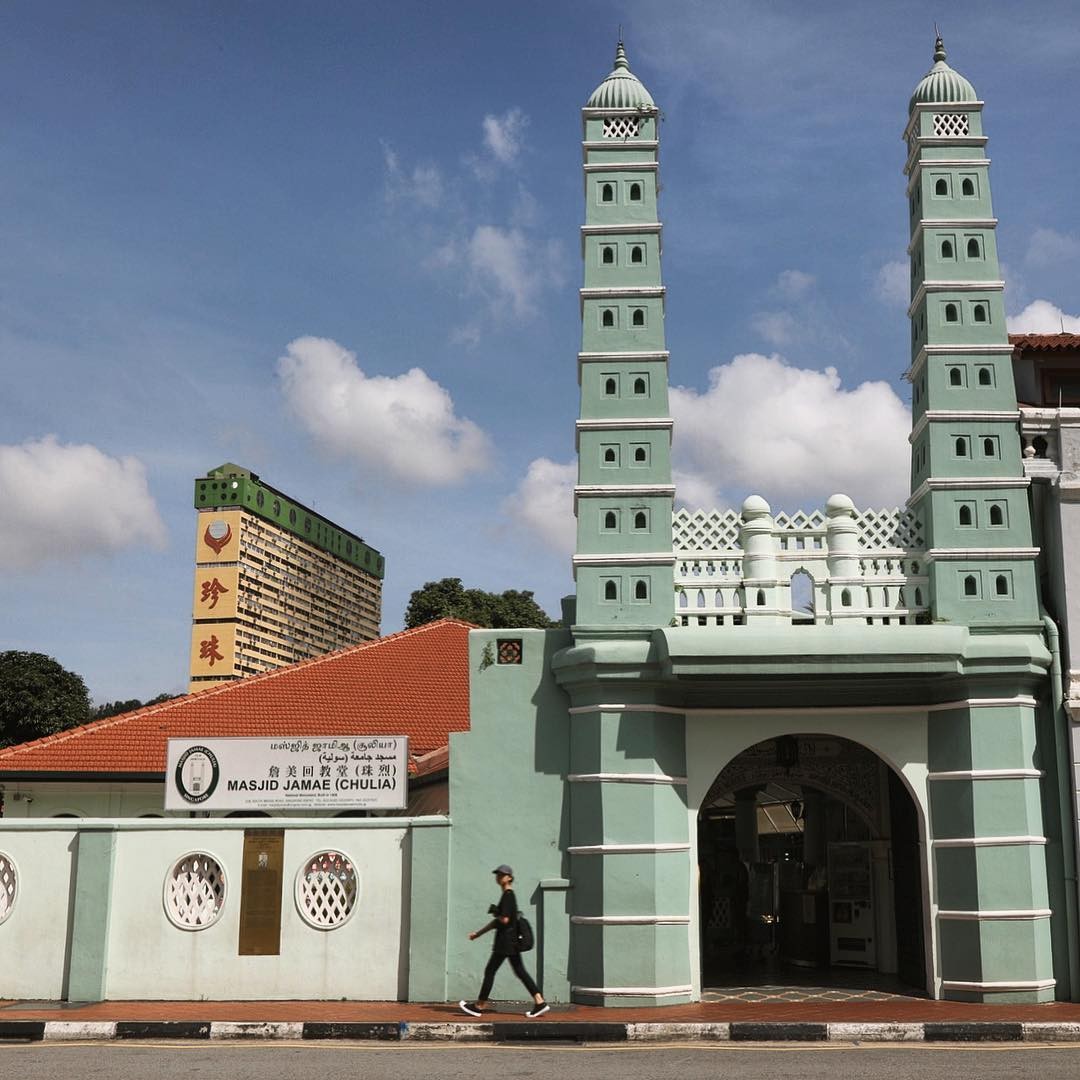 1035: Back in the 19th century, the thriving Chinese population came to Ann Siang Hill to patronise the various clan associations and social clubs.

Today, the shophouses have been beautifully conserved and restored, giving the place a quaint and old-timey vibe. Club Street and Ann Siang Road are closed to vehicles on Friday and Saturday evenings, giving way to the pedestrian traffic which come to seek newer establishments like cafes and bars. 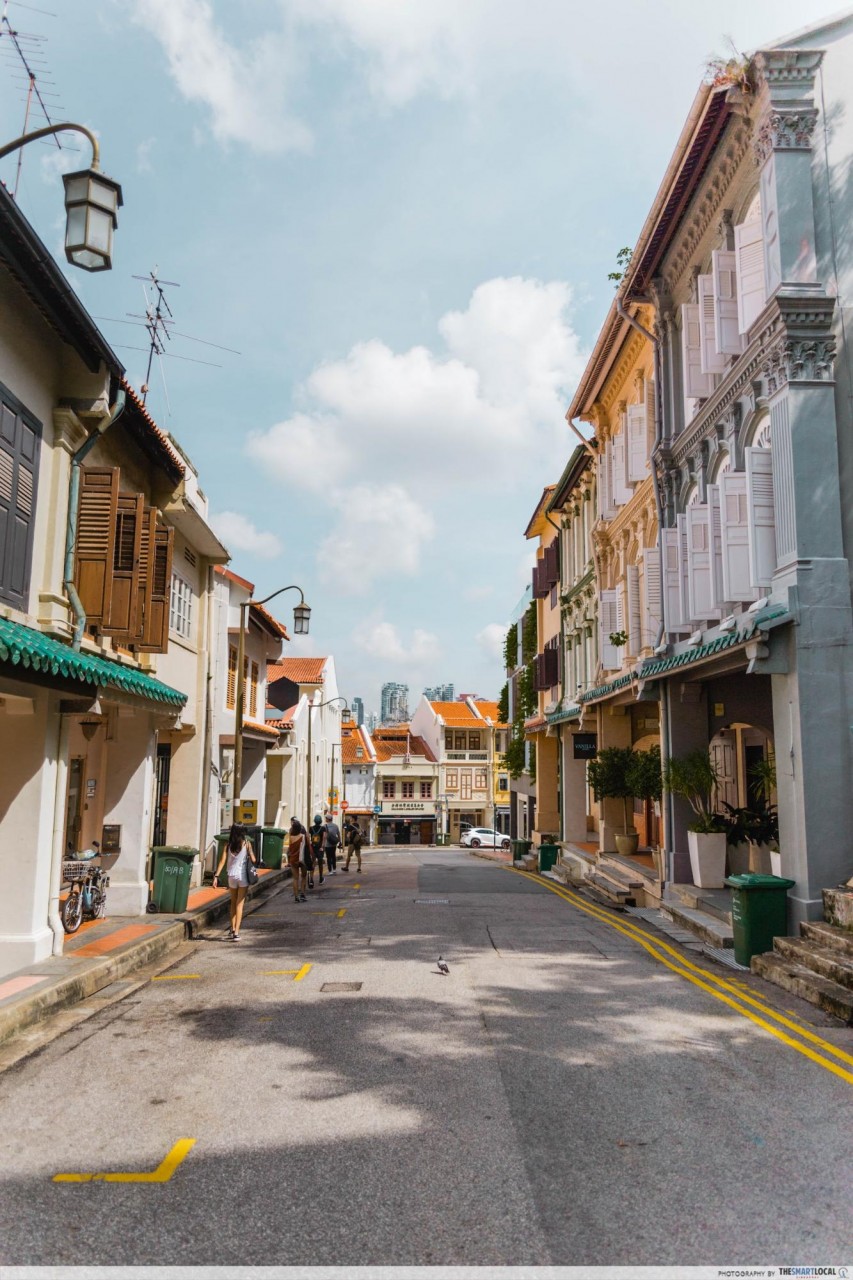 Our first stop at this hipster neighbourhood was the Goh Loo Club, which originally served as a gathering place for the local Chinese community. Though the building is 112 years old, the club’s project team was able to revamp it nicely, clinching the URA Architectural Heritage Awards in 2016, which recognises exceptional restoration works of national monuments and conserved buildings.

The team also added this ginormous mural on the side of the building, serving as a reminder of the significant historical personalities whose lives were intertwined with the club. 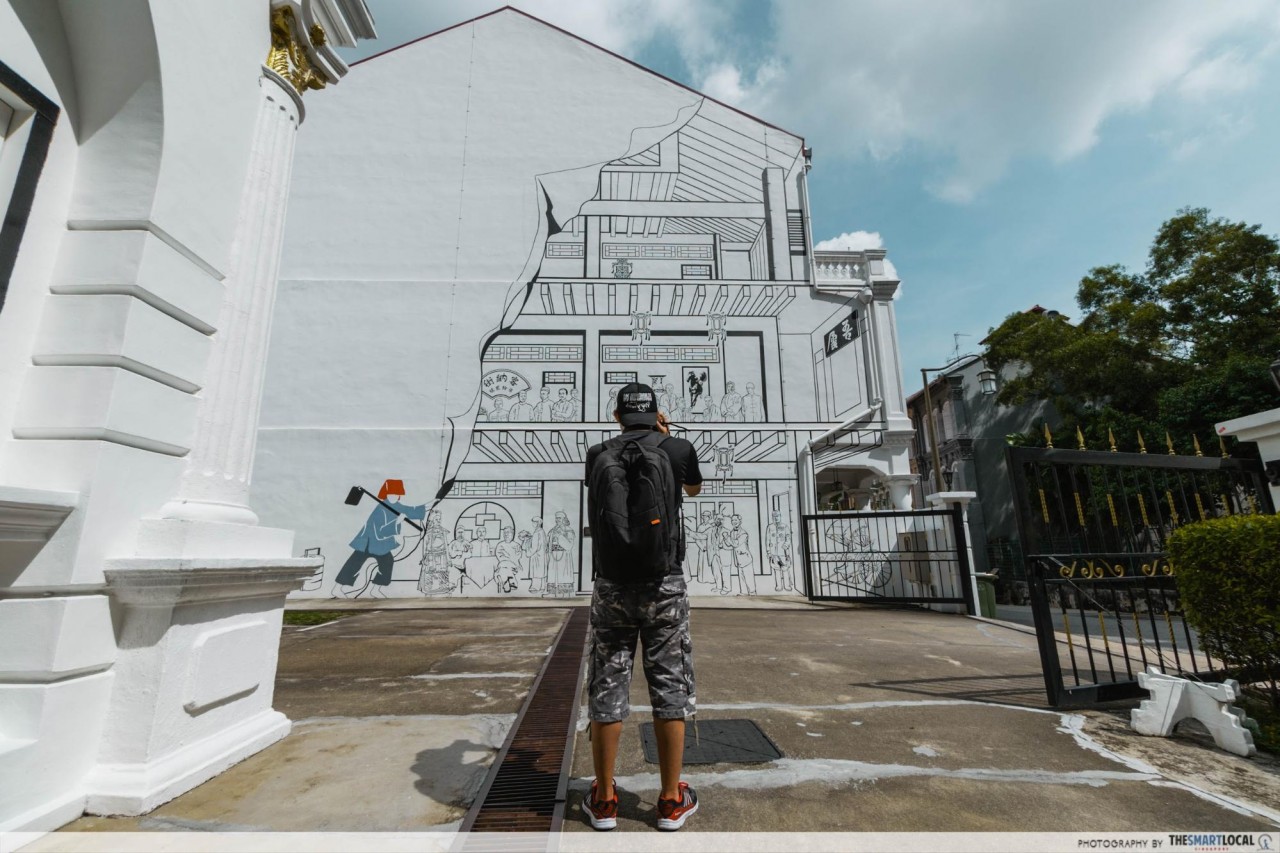 After a short walk, we arrived at Ann Siang Hill Park. This park harkens back to the days when this hill was a nutmeg and clove plantation!

As the highest point in Chinatown, this was a great place for some group photography. 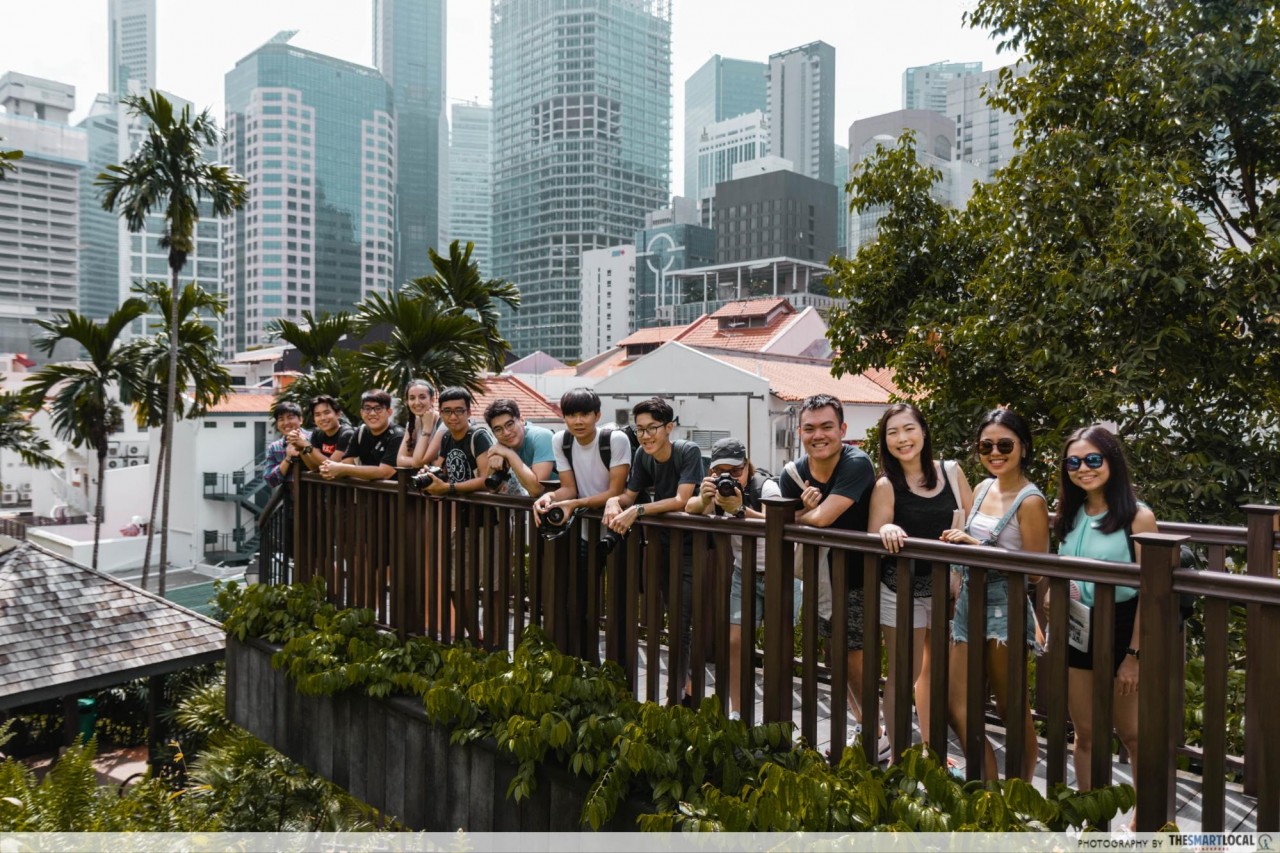 As we made our way down the park’s spiral steps, we spotted one of Chinatown’s remaining wells. These wells were once the main source of water for the folks of Chinatown, and ox-carts would bring water drawn from these wells to homes and businesses in the area. 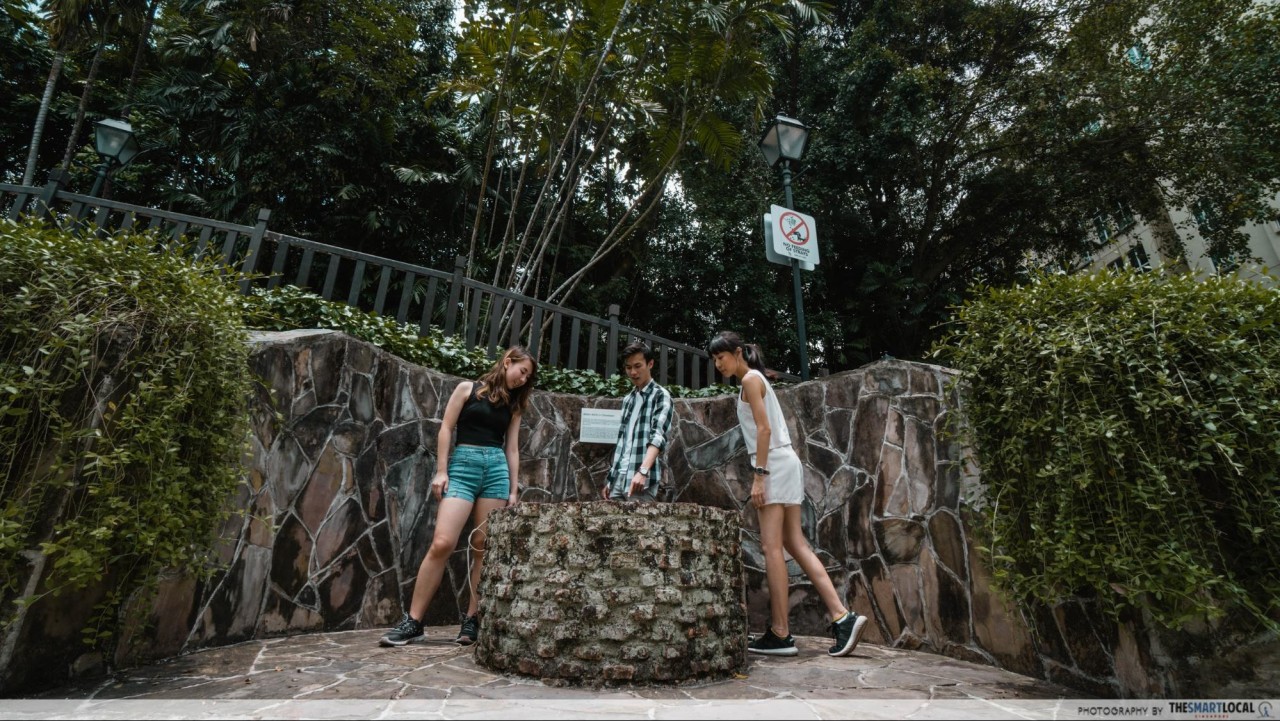 1105: While en route to Telok Ayer, we came across this sprawling mural along the rear wall of Thian Hock Keng Temple, also painted by artist Yip Yew Chong.

The 40m long painting tells the story of Singapore’s early Hokkien immigrants – including their livelihoods, traditions, and contributions to Singapore. 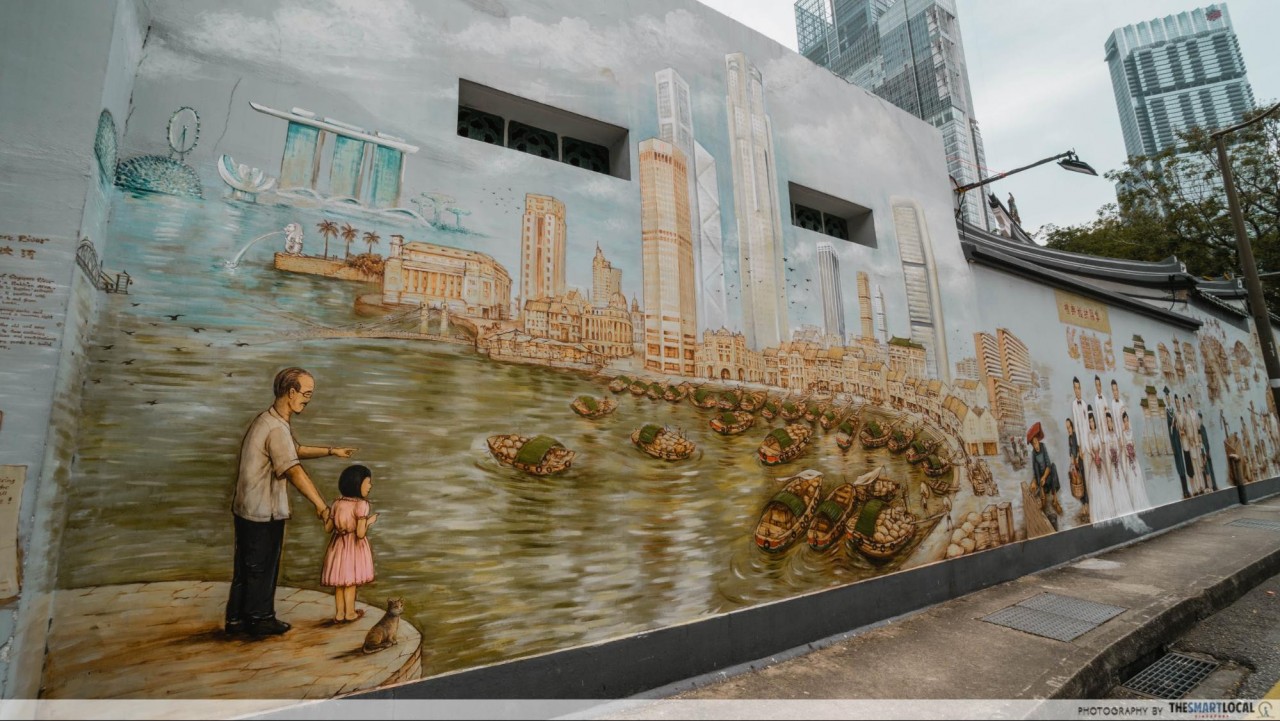 Once again, the LocoMole app came in handy, bringing this gorgeous mural to life. It explained the different scenes in the mural, giving us insight into the various Chinese customs and traditions which were represented in the painting. 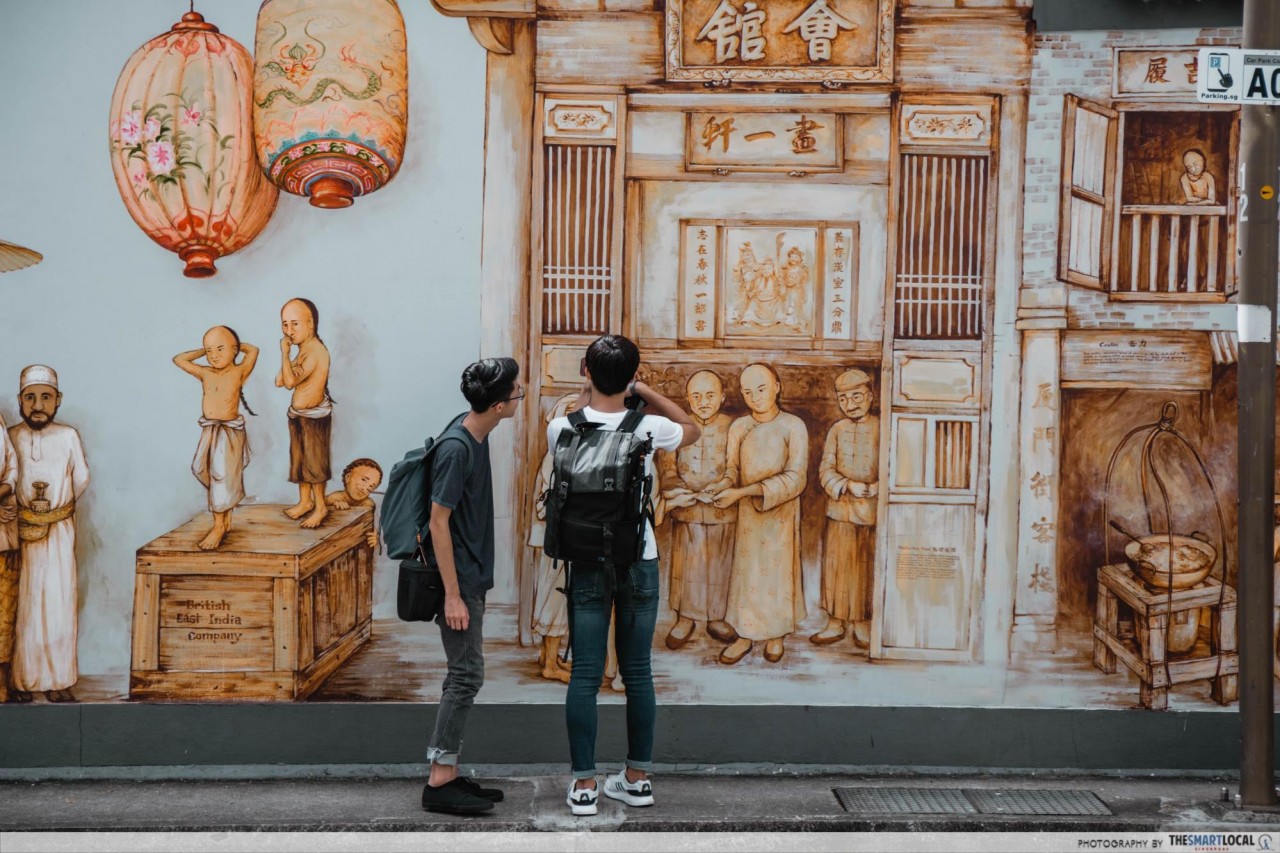 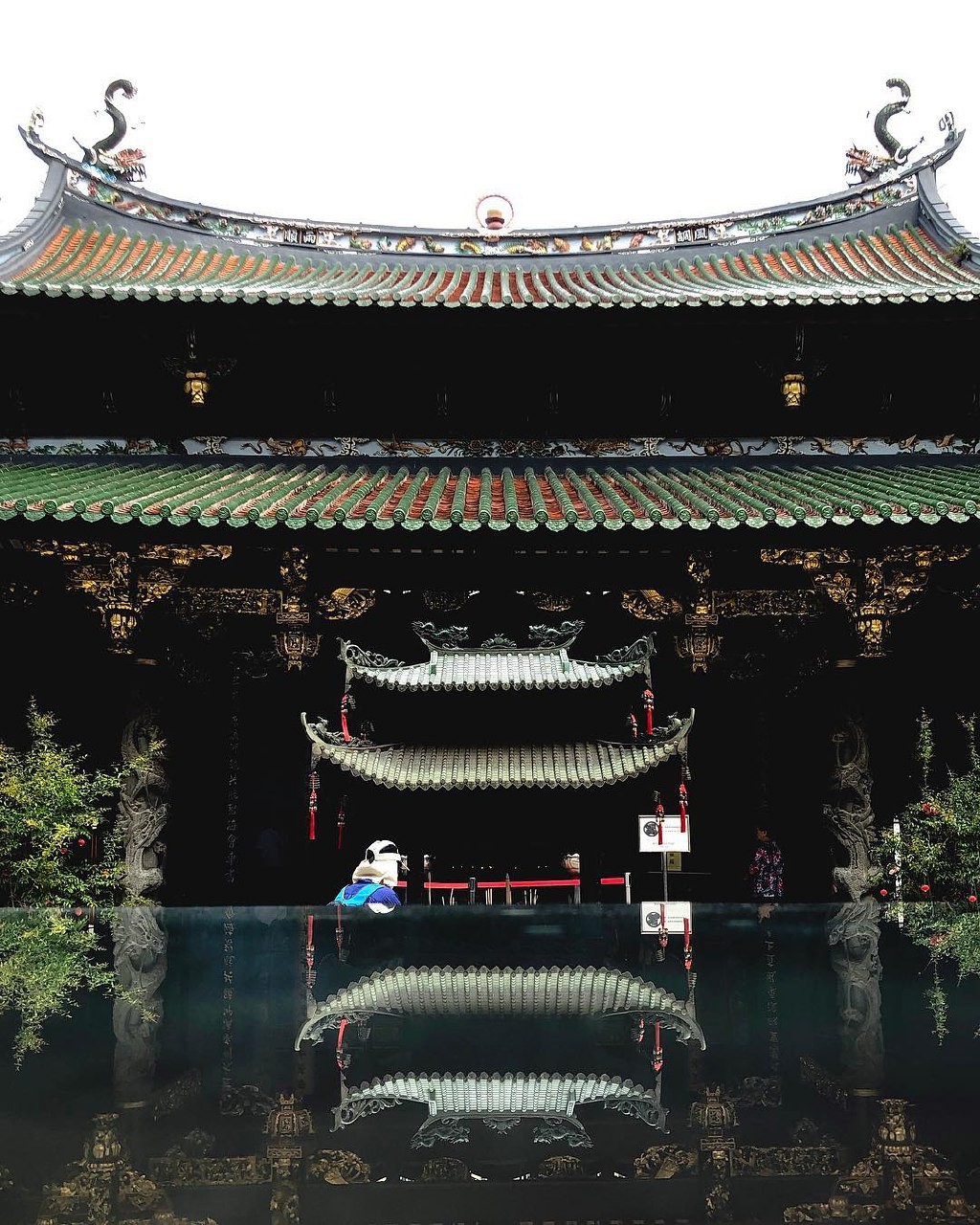 This temple, once built next to Singapore’s original shoreline, is dedicated to the worship of Mazu, the Goddess of the Sea. Given how many early Chinese immigrants travelled to Singapore by sea, this was a pretty important place of worship. 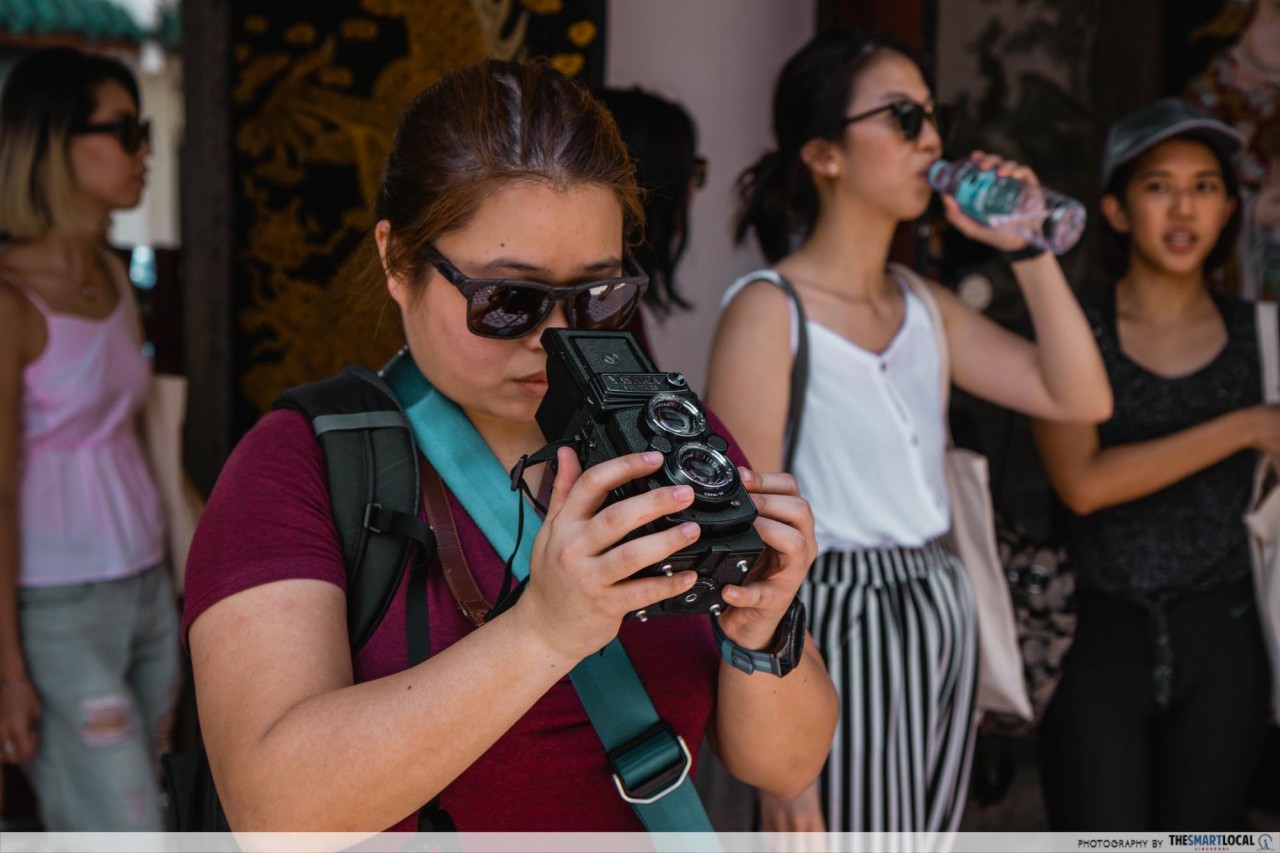 One of the participants even brought along an old-school camera!

1130: The first place we stopped at in the business district of Tanjong Pagar was Amoy Street Food Centre – a favourite among office workers who work nearby, thanks to the wide variety of mouth-watering dishes here. 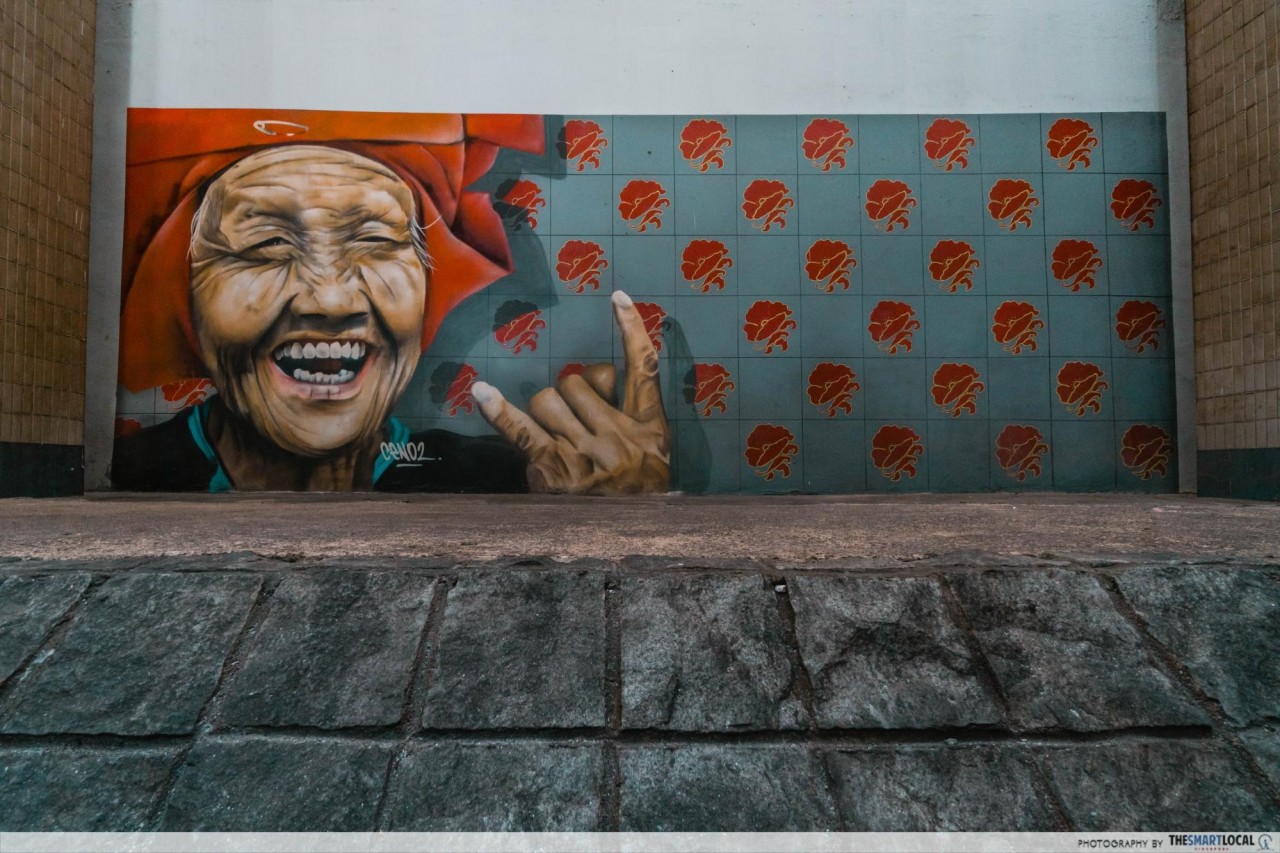 Head inside Amoy Food Street Centre to reach this mural.

Within the food centre are murals painted by Anglo-Chinese School (ACS) students and staff as a tribute to their school’s humble beginnings at Amoy Street more than a century ago.

While walking to the next location, we spotted the Rainbow Shadow exhibit. This colourful display is part of the Urban Design Route through Tanjong Pagar, which will only be here till June 2018. 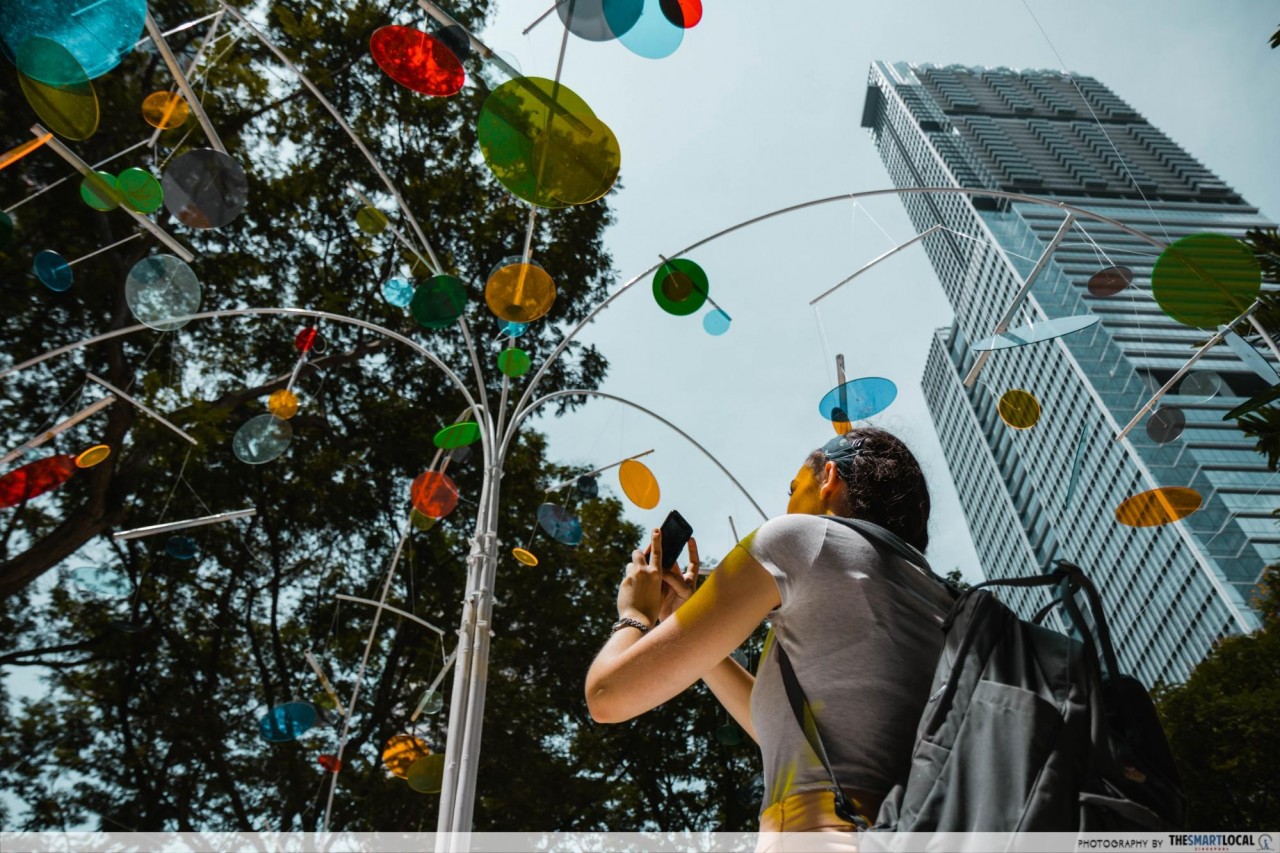 Like a giant baby cradle toy, Rainbow Shadow is made of tinted plastics and objects that shift constantly in the wind, creating a myriad of shadows and colours to represent the playful side of the sun. Our #Instawalkers took advantage of this to score some spectacular pictures! 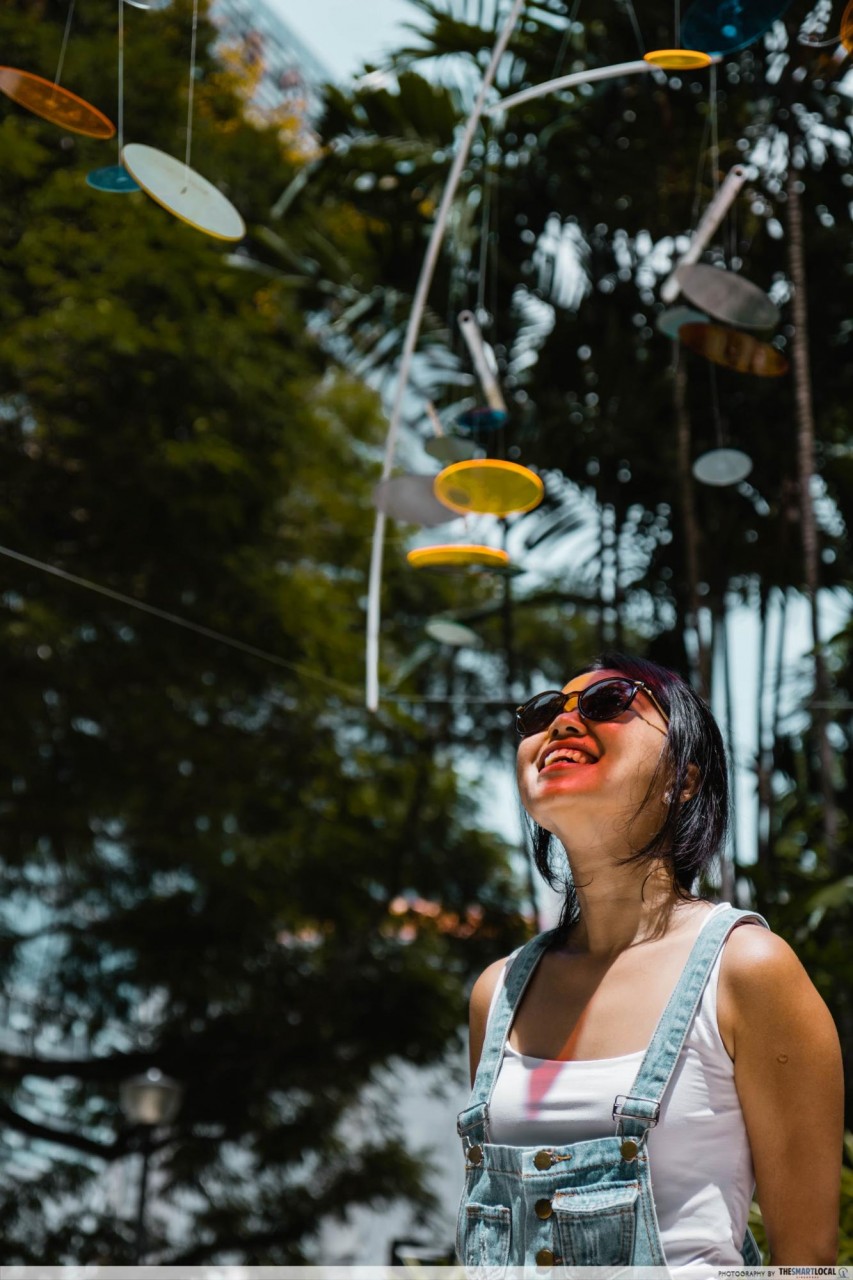 1150: Tanjong Pagar used to be primarily an office district, but with more residences and shopping options popping up, such as Tanjong Pagar Centre, it’s now a great place to chill after work too. 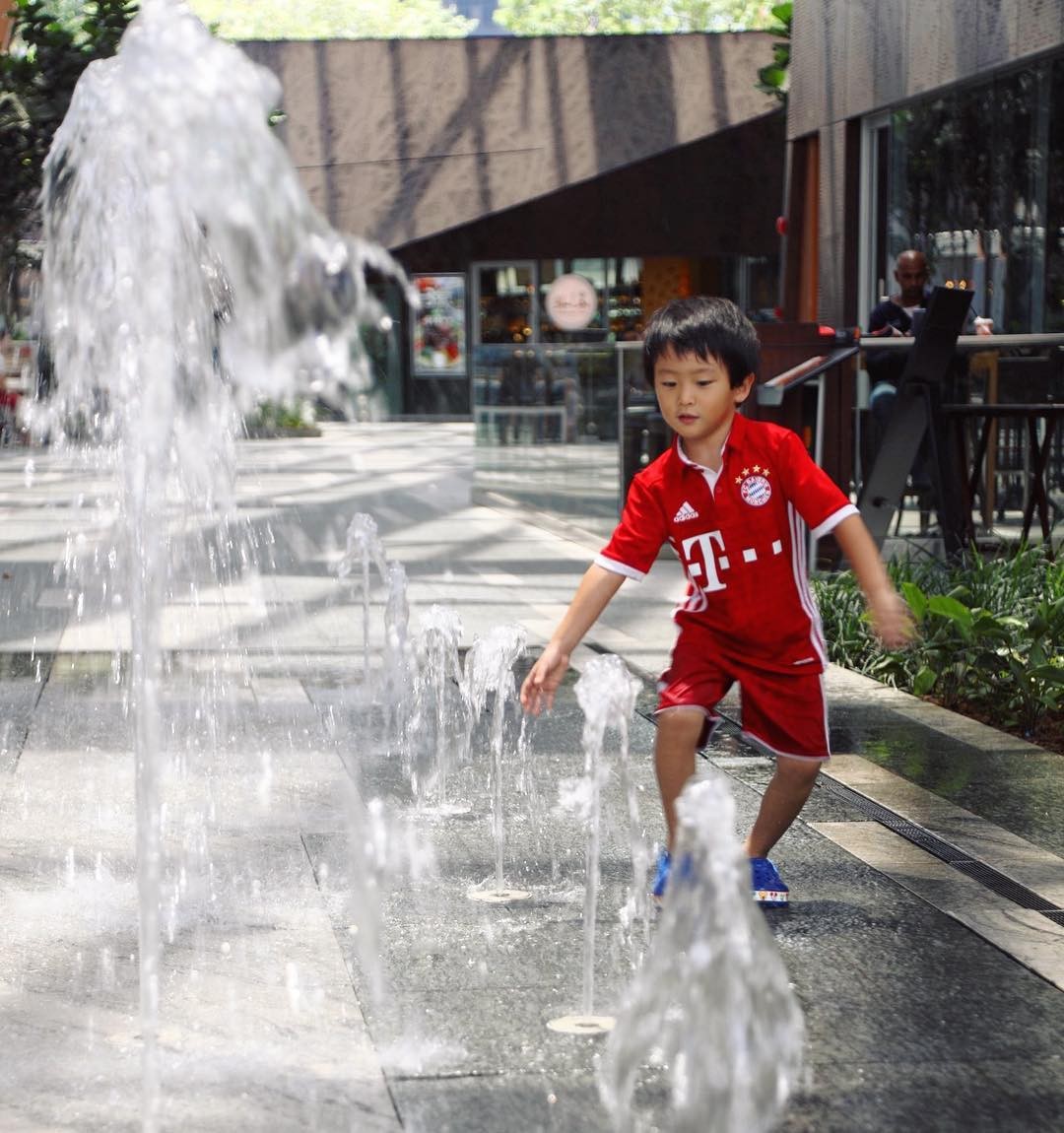 Standing at 290m, Tanjong Pagar Centre is currently the tallest building in Singapore. There’s a variety of modern retail shops and hipster eateries, as well as a pretty neat urban garden.

There are also two pianos placed here by the Play It Forward movement – supported by Tanjong Pagar Centre and URA’s Our Favourite Place Programme – which are free for anyone to play. This was a good opportunity for the more musically-inclined #Instawalkers among us to show off their talent. 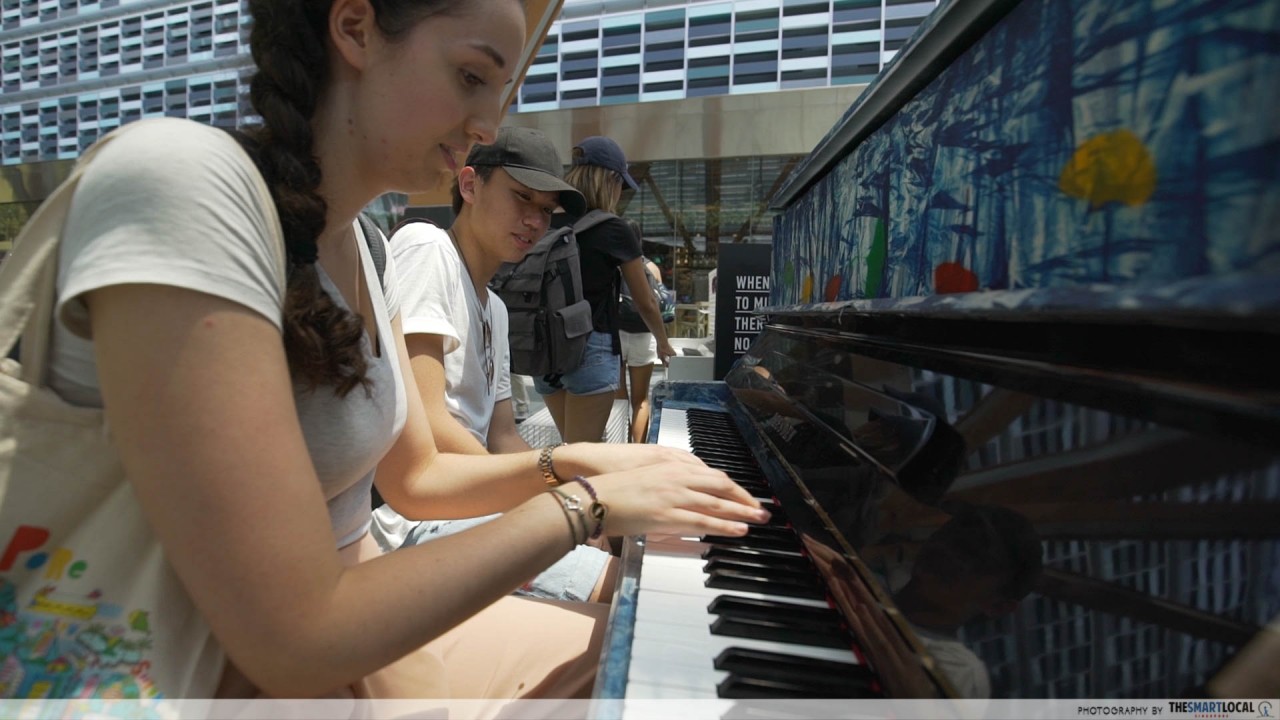 1220: After all that exploring, we finally made it to the sweet air-conditioning of the MND building. The view up here was pretty nice too. We could see the sprawling complex of conserved shophouses before us, and modern, taller buildings like The Pinnacle@Duxton made a pretty good backdrop for some photos. 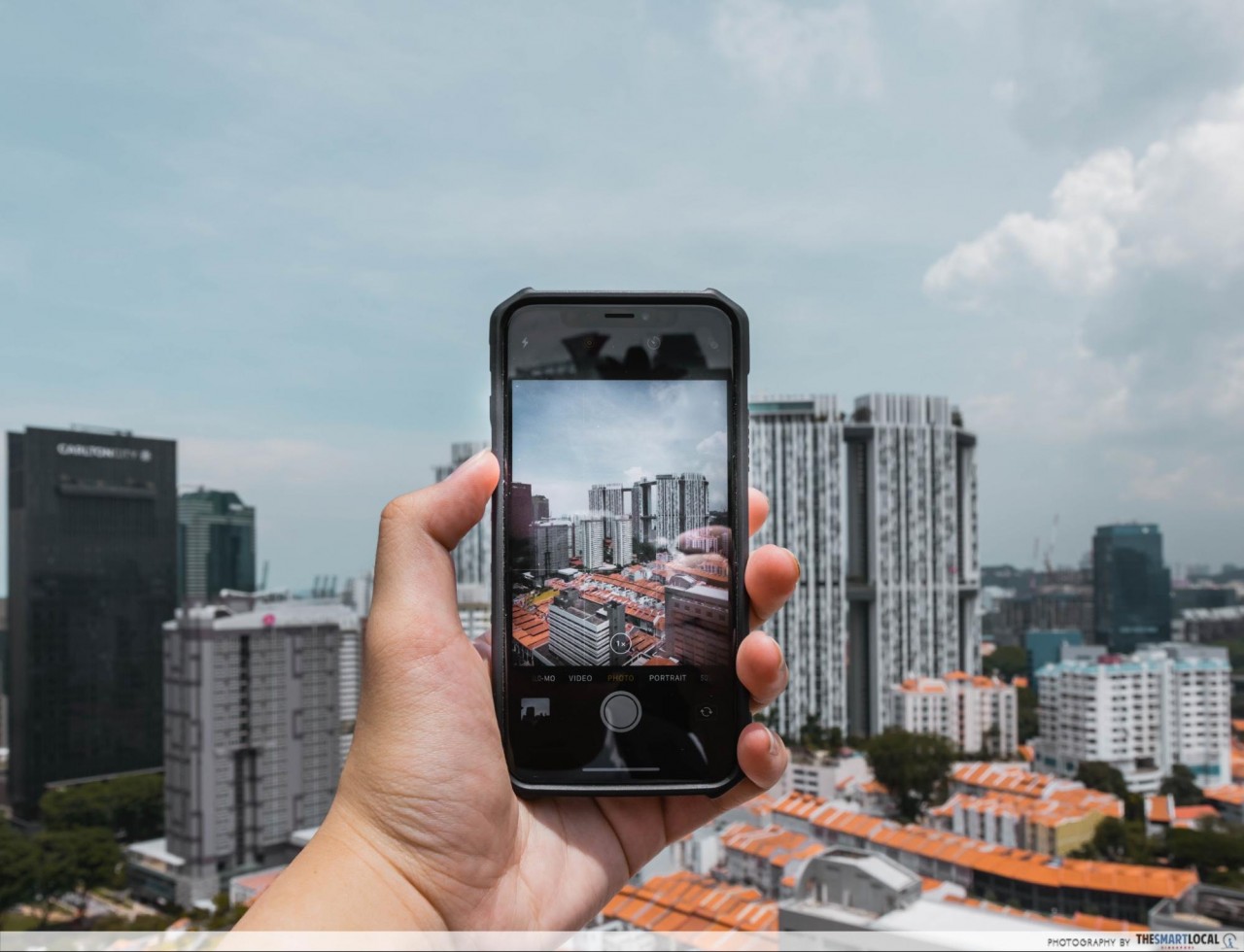 1300: Having spent the morning taking photographs around Chinatown and Tanjong Pagar, it was now time for us to announce the winners of the three themes: Life, Colour and Tradition. 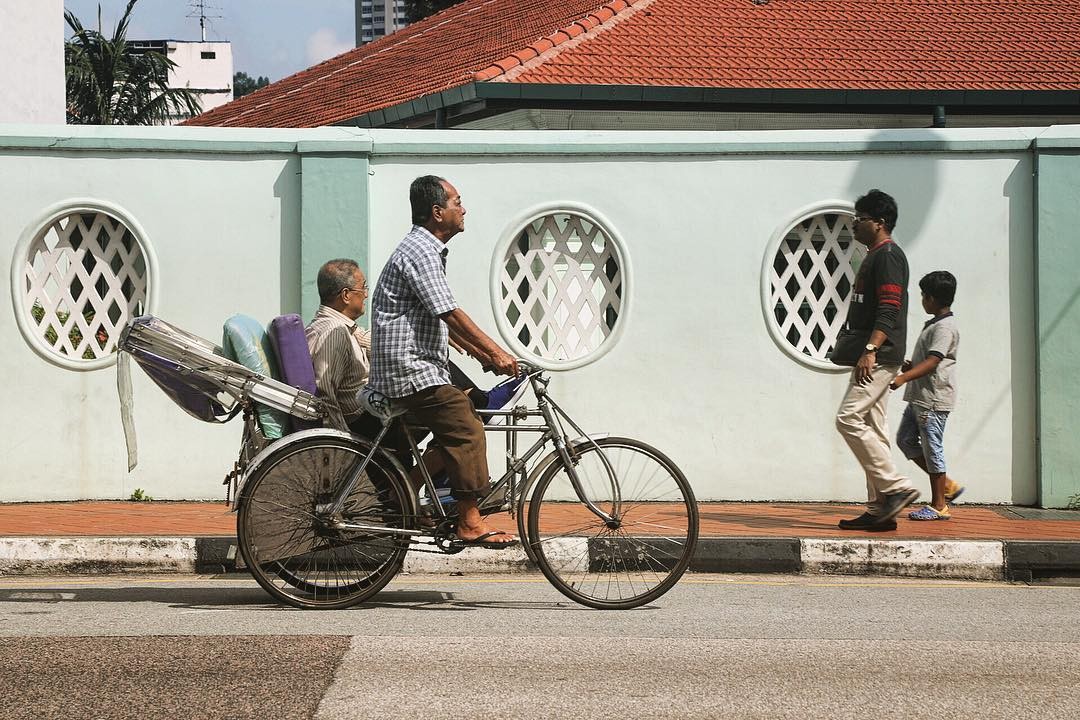 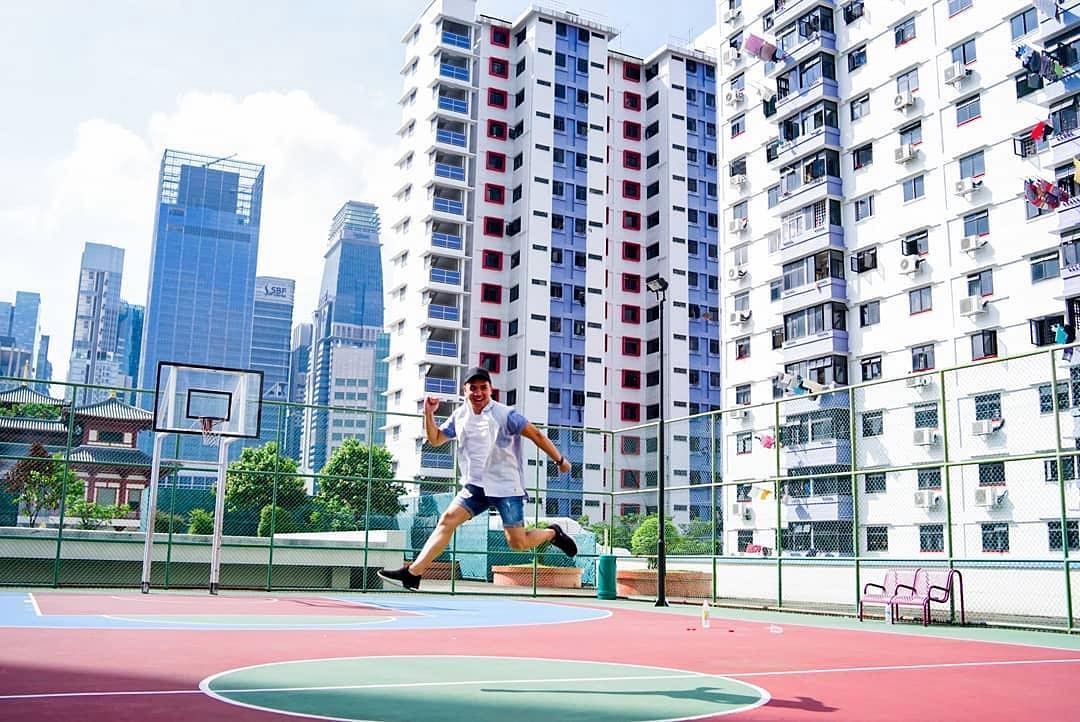 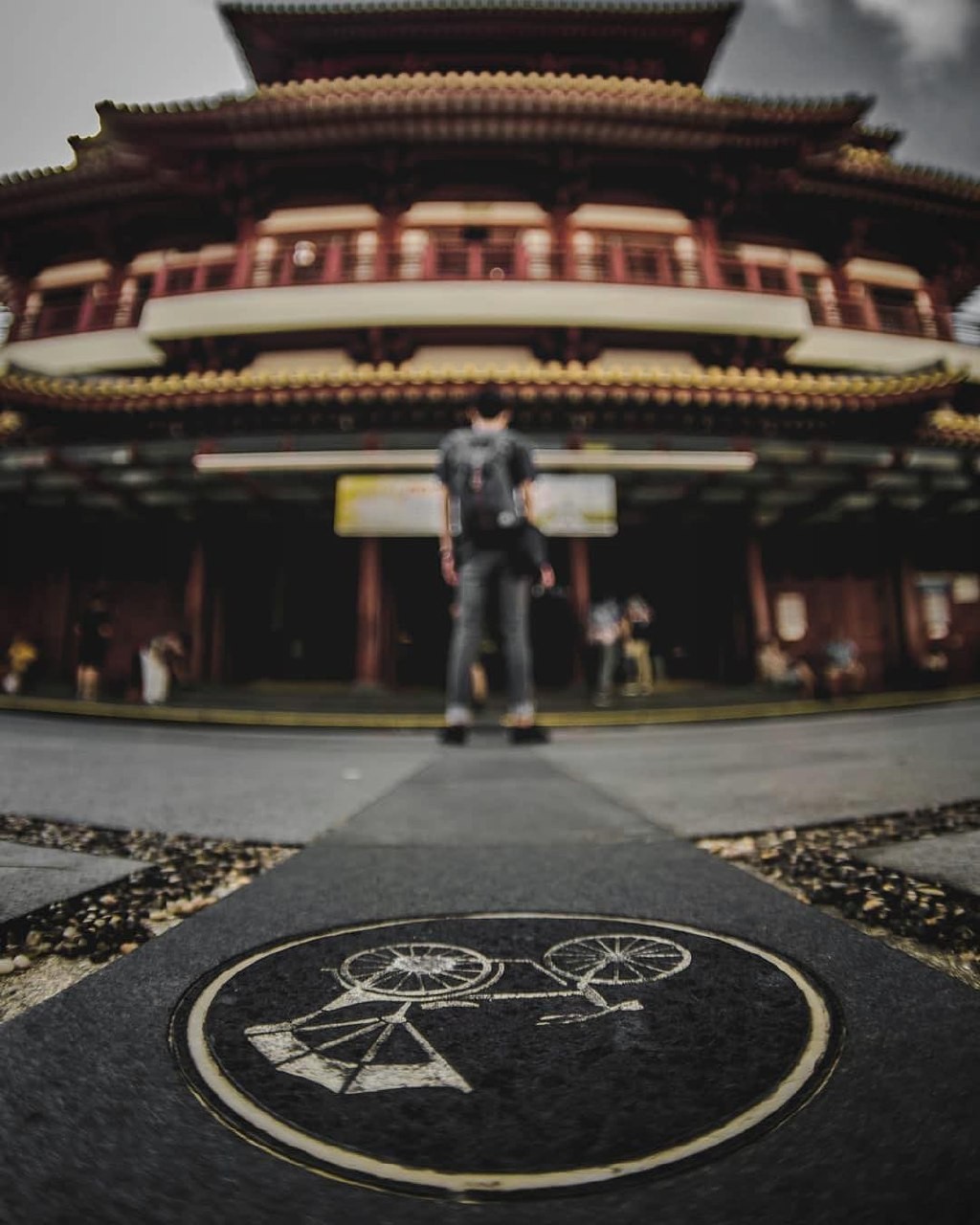 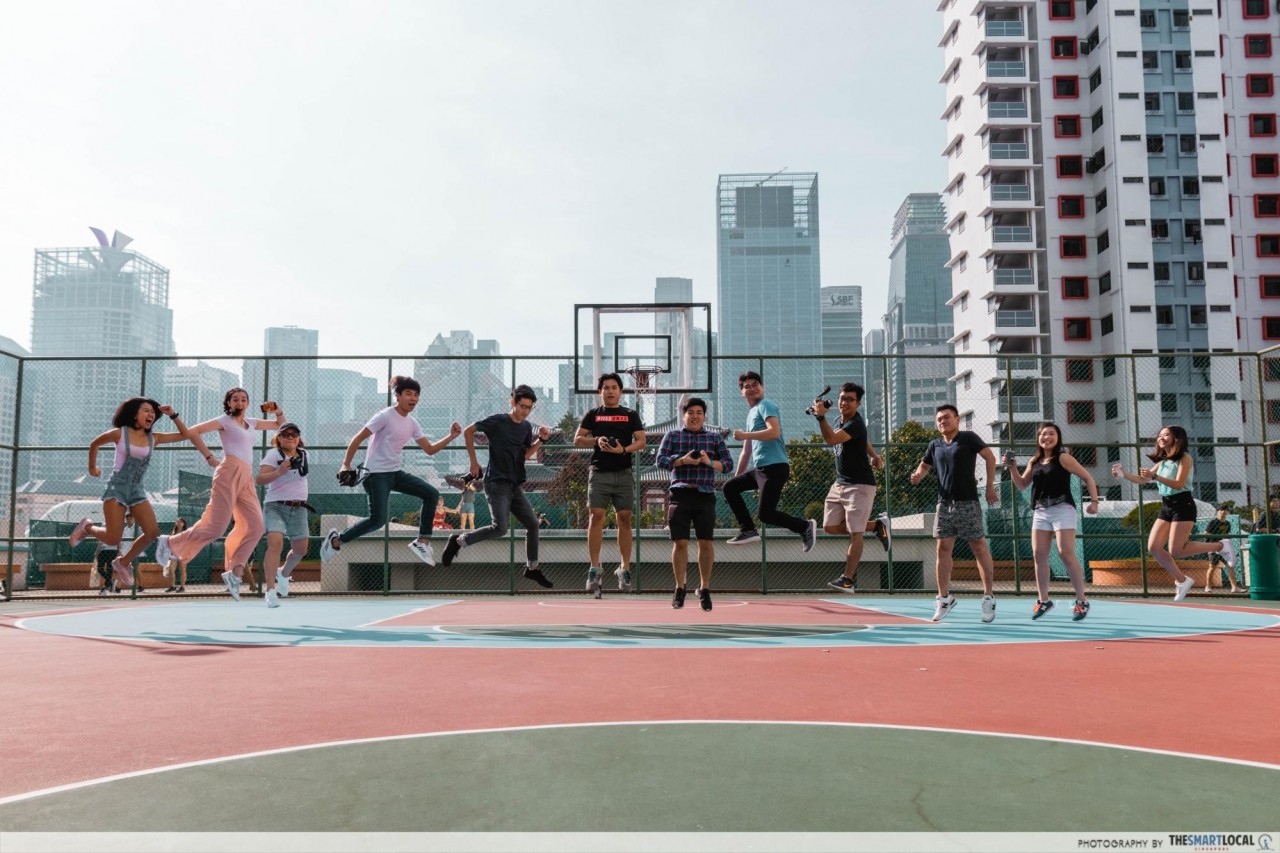 1330: #iWalkChinatown might be over, but everyone left with more than just pics for the ‘gram. Throughout the long half day in the sun, friendships were forged, memories were made, and we experienced a side of Chinatown and Tanjong Pagar that we don’t normally notice.

Catch us at the next #Instawalk! 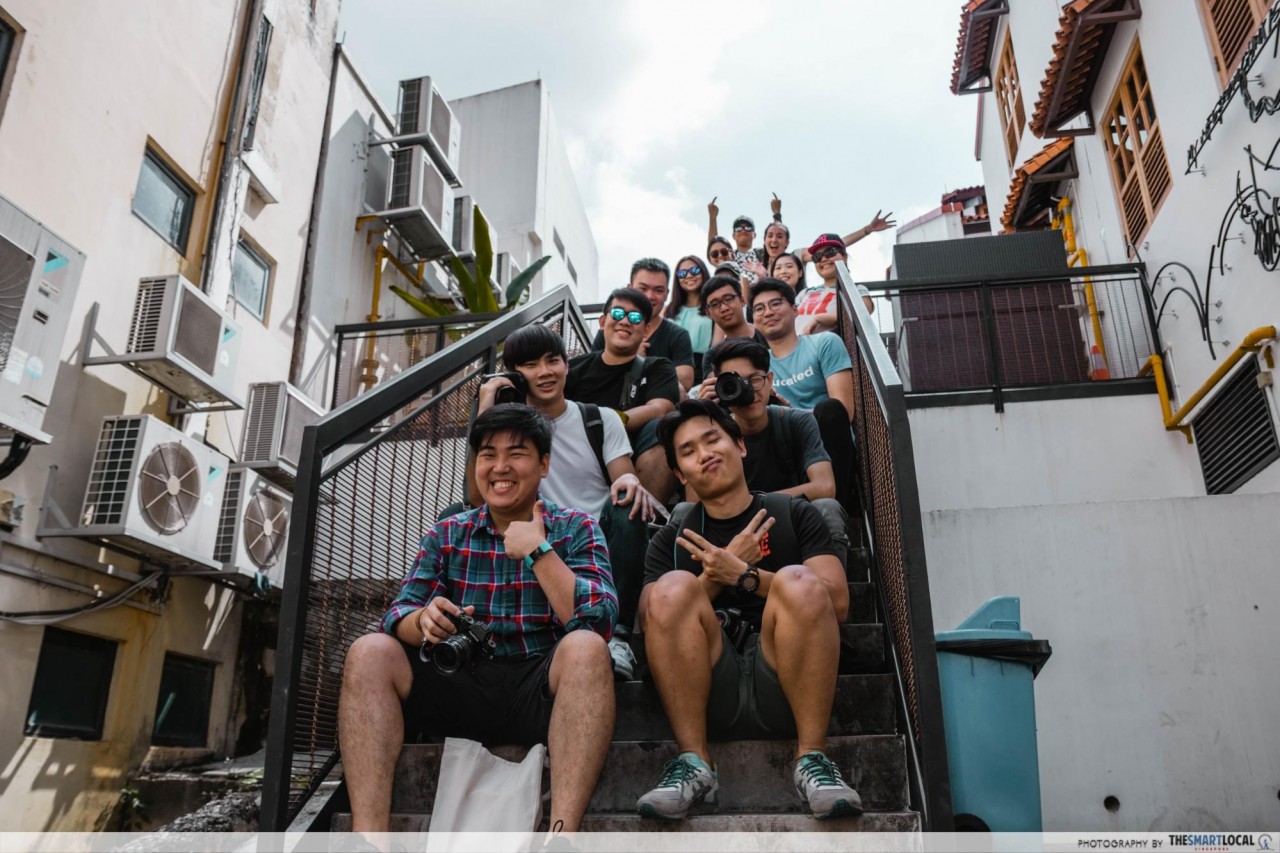 There’s more to Chinatown and Tanjong Pagar than meets the eye, and our adventures here concluded yet another awesome chapter of #Instawalk. If you’re starting to feel the FOMO, fret not, because we have another exciting one coming up: Singapore Botanic Gardens.

Just follow @thesmartlocalsg and @MNDSingapore, and you’ll be in the loop on any future walks. In the meantime, check out the pictures from this walk with the hashtags #TSLWalks and #iWalkChinatown.

Till next time, explorers!

YOOX: Luxe Fashion Store Offering 15% Off & Free Shipping to SG in May
Keramas Aero Park Bali - This Abandoned Airplane Is Now A Restaurant With Sea Views...