We’ve all felt the jitters of applying for a dream job or course of study that we’ve set our heart on, since it involves beefing up our resume and acing the interview. However, employers and schools might also throw you the curveball of gruelling IQ test questions to get a sense of your intellectual potential and cognitive abilities.

From pattern recognition questions that seem simple at a glance to mathematical questions that test your prowess for a relevant course, check out some of the hardest IQ test questions that have been asked by companies and schools during the hiring process:

Note: These questions are adapted but retain the same level of difficulty. Have a go solving them before checking the answers!

Possibly the most rampant type of IQ test question to make an appearance in an aptitude test, pattern recognition questions are conceived to assess your thinking process through a sequence of images. Read on for some examples. 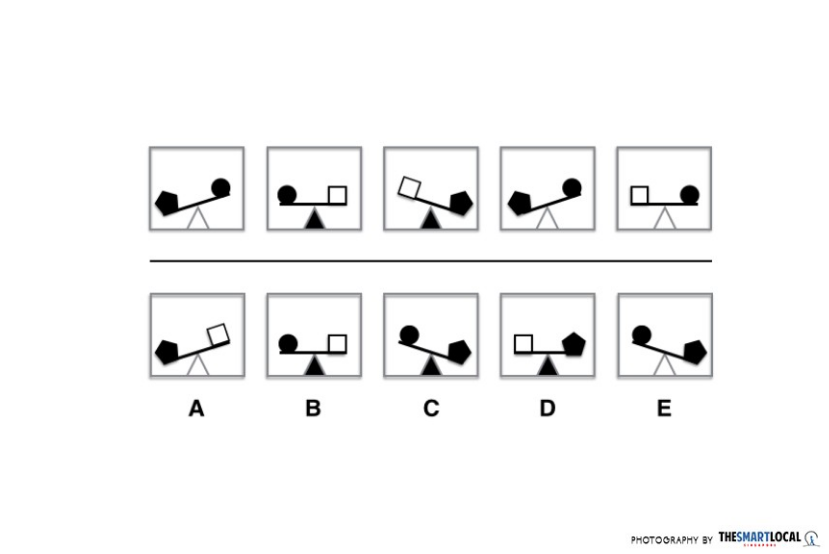 Procter & Gamble is a consumer goods company that employs people across 150 brands, and they have an intense application process consisting of multiple tests, including IQ tests.

In order to hire for roles like Software Engineers, brain teasers like this might be asked during the interview process, which require a keen eye for detail. The go-to method that most use for questions like this is basic mathematical inequalities, which will lead you to conclude that the circle and square weigh the same, while the pentagon weighs more than both of them. 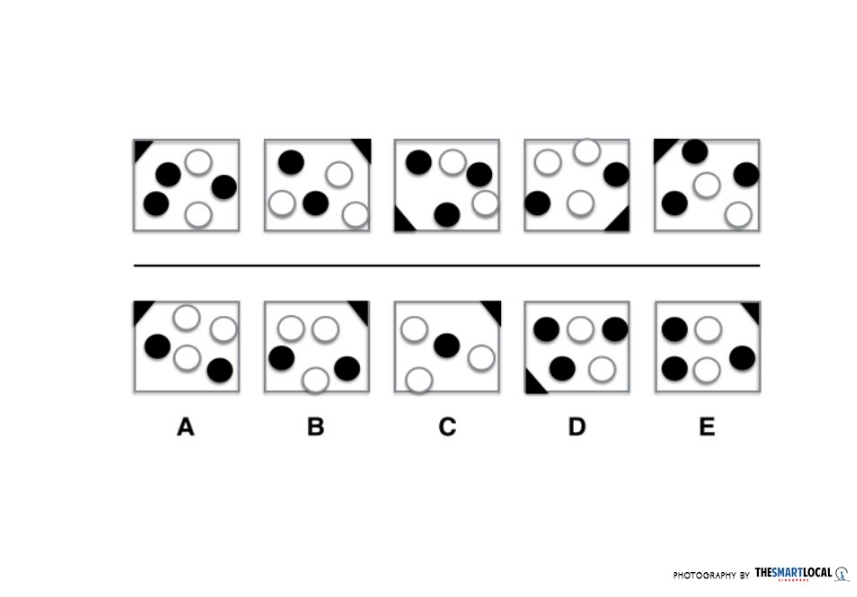 Also included in a test by Procter & Gamble, this question ups the ante by overwhelming you with oodles of shapes and shades splashed across the frames. Don’t be preoccupied with the positions of the circles, however, and focus instead on quantity. Each frame consists of exactly five circles, but the ratio of shaded to unshaded circles alternates between 3:2 and 2:3.

That narrows the answer down to either A or B, but because the triangle in the corner moves in the motion of a ‘Z’ throughout the sequence, B would be the correct answer. 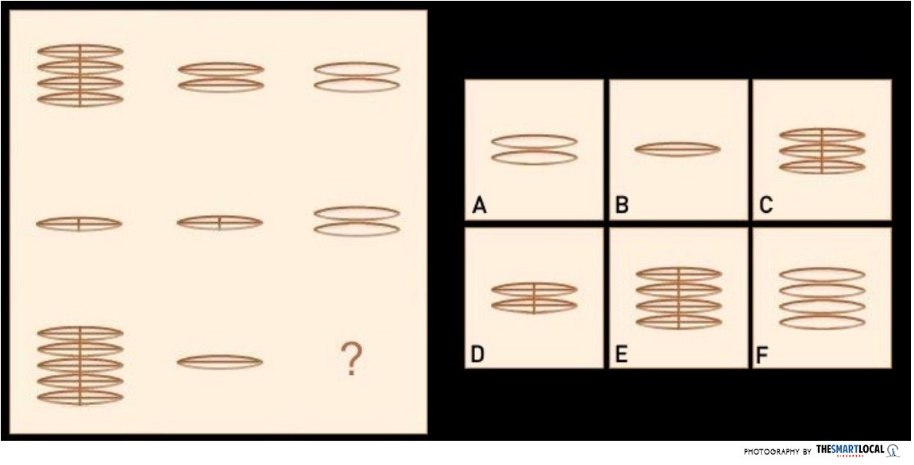 If you’re interested in applying to TheSmartLocal, know that you’ll be asked to take a IQ pattern recognition test as well, and these are some of the questions that’ll pop up. Yup, I took one myself upon my application.

Logical reasoning questions are a broad group of questions which essentially challenge you to interpret the situation given and solve a problem. 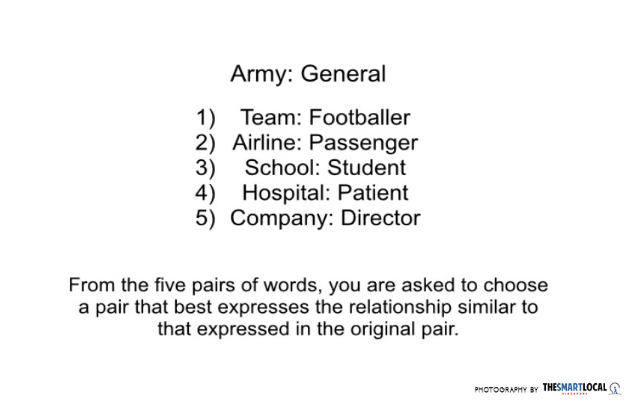 NSmen would be familiar with taking the psychometric test pre-enlistment, which plays a part in their allocation to a vocation and possible admission to a leadership course. This question is a sample of what could appear. 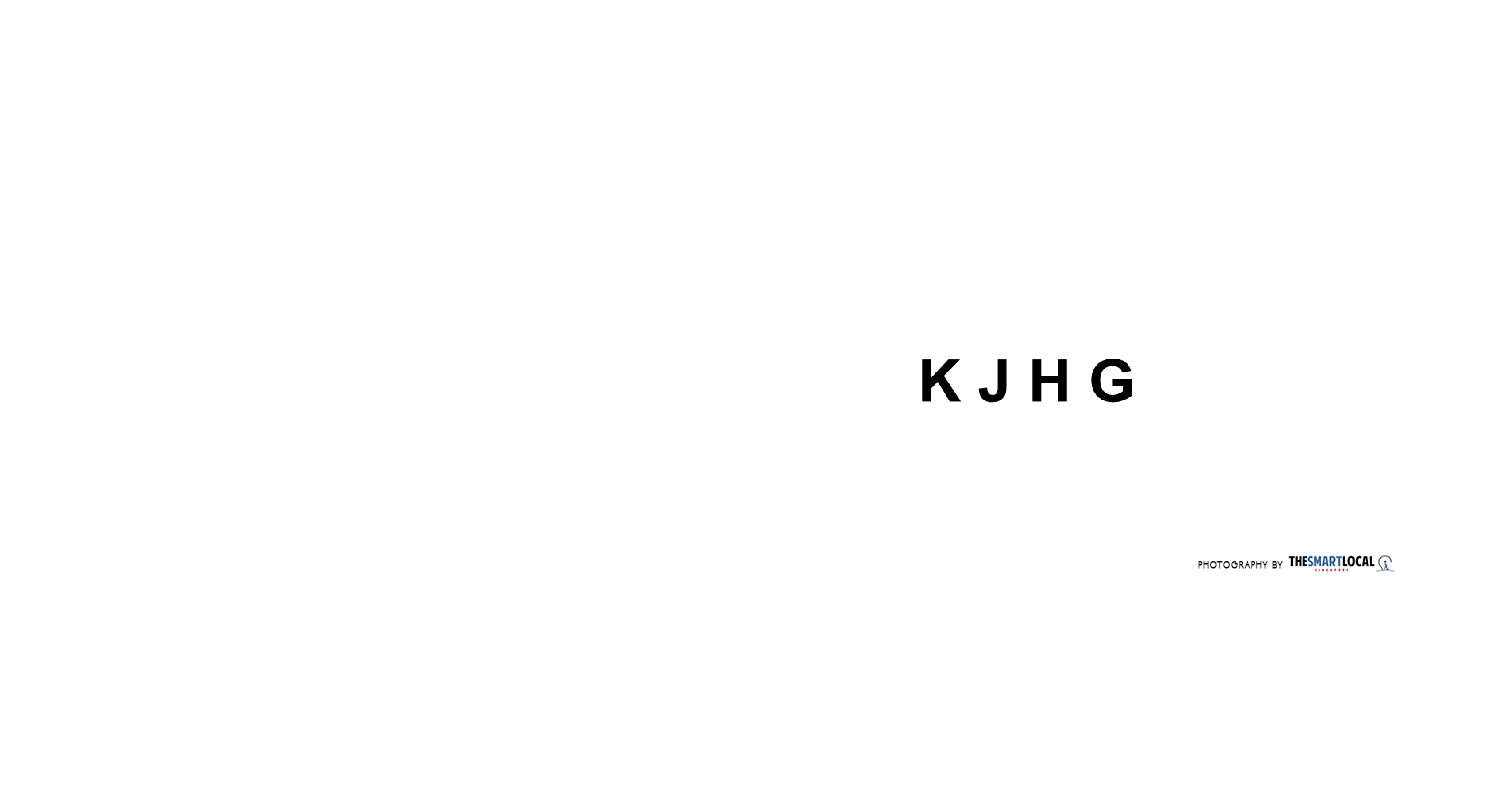 Mensa is the world’s largest high IQ society, and they typically admit people with an IQ score that is at the top 2% of the population. Here is an example of a question that might have appeared in their admissions test.

Cue the alphabet song running through your head right this instant upon seeing the sequence of letters. But there’s no need for that – you might be rendered speechless by how straightforward the answer is after discovering the solution.

If you have a keyboard near you, take a gander at the keys and you will find that the letter “F“ is the answer after reading the letters from right to left.

Spatial awareness questions are mostly pictorial questions that test your capacity to perceive and manipulate objects in different dimensions. 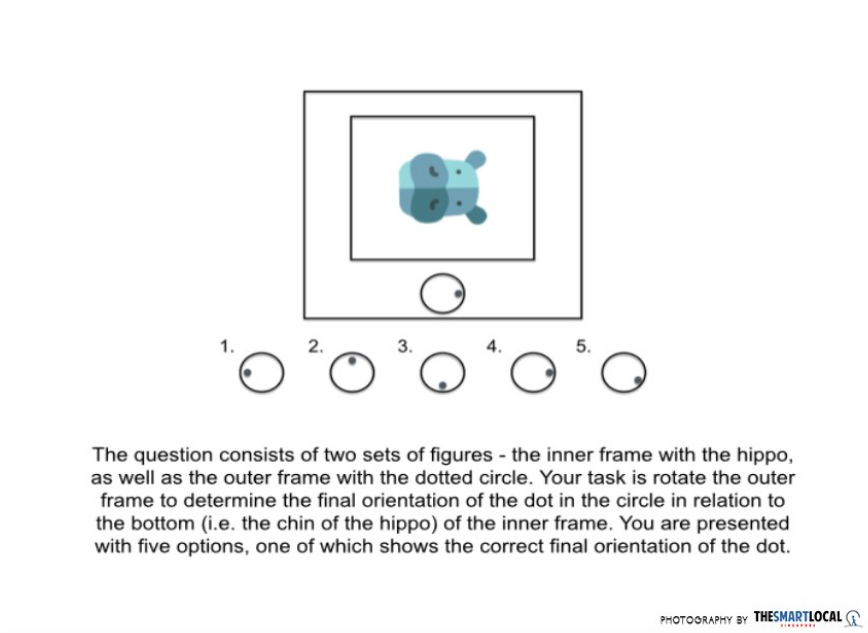 This question requires only a simple maneuver of the outer frame 90 degrees to the left, so that the circle with the dot would now lie at the hippo’s chin. It is simple enough as it sounds, but many find it a challenge to visualise the change in their mind, instead unknowingly turning the outer frame 180 degrees to the left, leading to 1, which is the incorrect answer.

Turning the outer frame 90 degrees leftwards would result in option 3, the correct answer.

7. What number should replace the question mark? 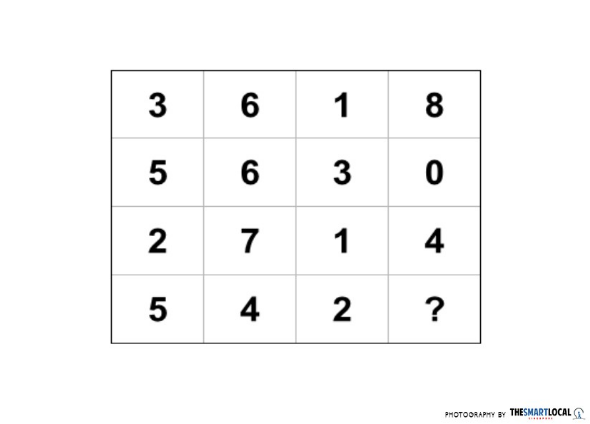 Another stumper from Mensa, this question actually requires you to do some quick math to arrive at the answer, and might be used to determine suitable candidates for roles like Data Scientists.

Though not straightforward and apparent at first glance, the key to this question lies in multiplying the numbers in the first two columns to get the 2-digit numbers that make up the third and fourth columns. 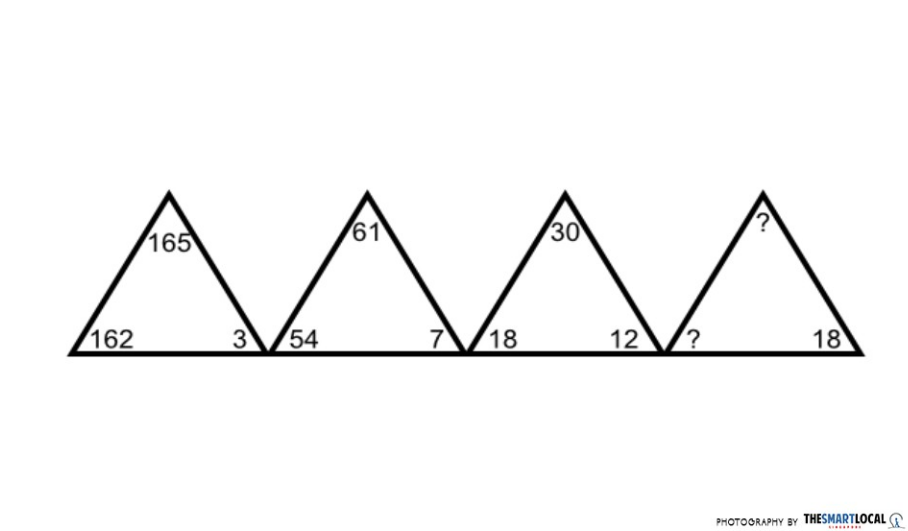 This Mensa question really involves some next-level thinking, and a dose of patience too. First, you have to catch on with the fact that the number at the tip of the triangle is a sum of both numbers at the bottom.

If you were wondering, the numbers at the bottom right follow a sequence as well, where you have to add 4, then add 5, and finally add 6. 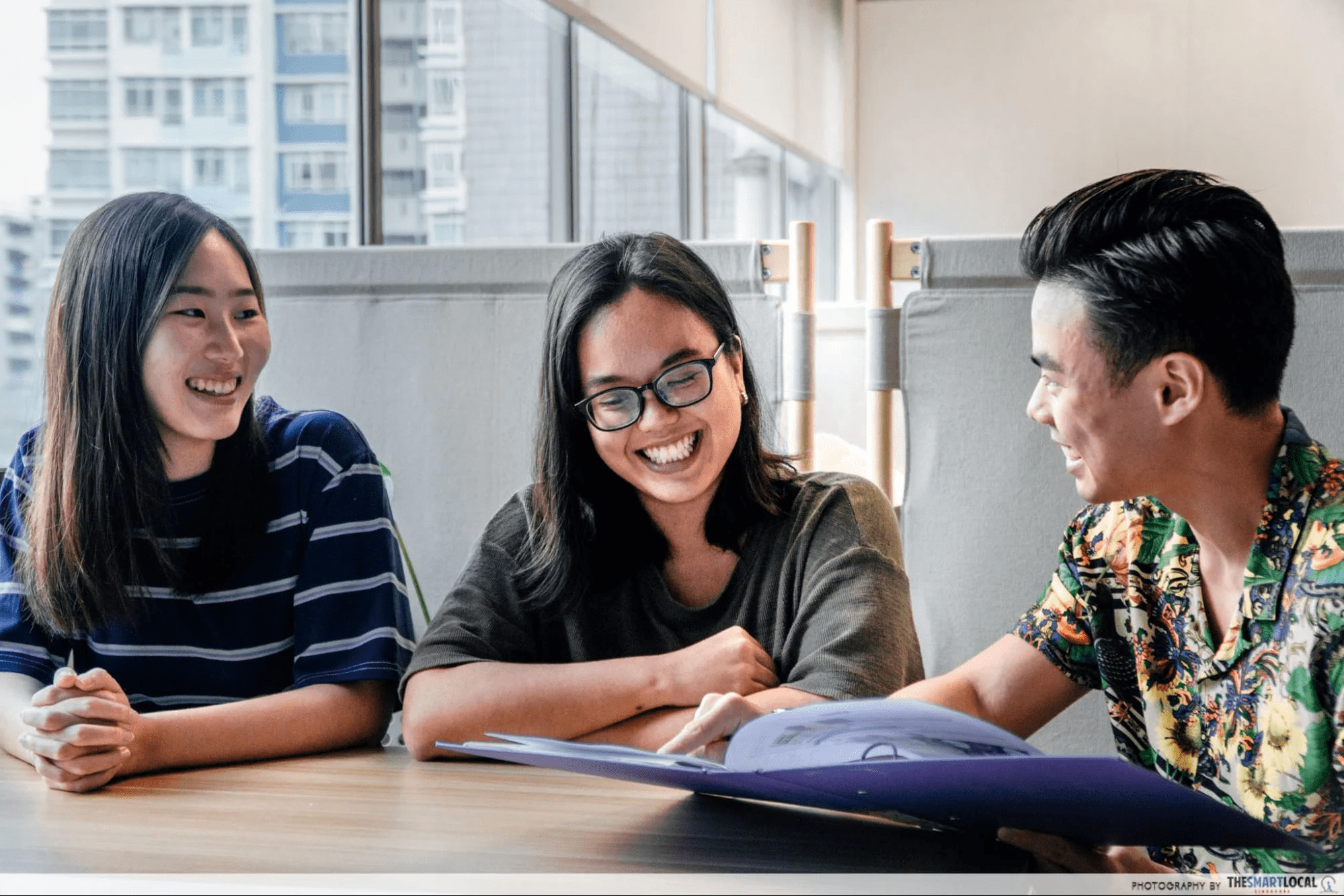 Most of us are no strangers to tackling IQ test questions in aptitude tests when applying to organisations, and these questions are often equal parts challenging and fun.

Such questions essentially determine your intelligence, but also take into account aspects like visual-spatial processing, short-term memory and numerical reasoning. In our daily lives, possessing such cognitive abilities can help us think rationally and make better decisions.

Challenge yourself with a University of Portsmouth degree from Kaplan 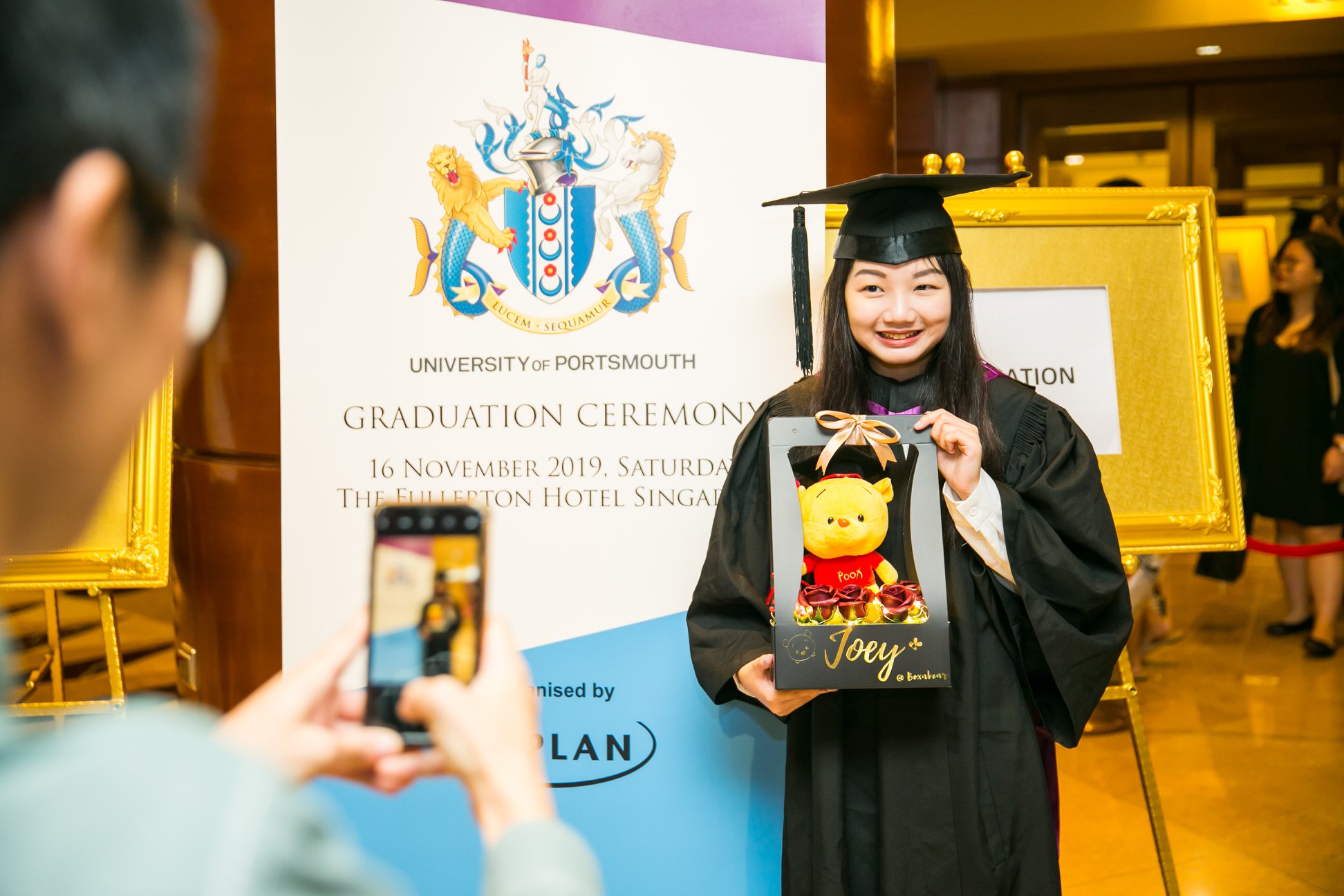 If such big brain exercises are up your alley, check out courses from University of Portsmouth (UOP), which has a stellar reputation for their quality teaching and high level of student satisfaction. They were even awarded the prestigious Gold rating for the Teaching Excellence Framework, which is a measure of teaching excellence in the UK.

It’s no secret that IT is our future, so embarking on an IT degree at UOP through their partner institute, Kaplan Singapore, can fully equip you with the skills to thrive in the IT field. You can choose from three different degrees under their Bachelor of Science (Honours) programme. The Cyber Security and Forensic Computing course teaches you skills to develop both softwares and hardwares for digital forensics, where you can solve cyber crimes.

If you relish the satisfaction of solving problems and also have an interest in coding, the Software Engineering course lets you learn essential programming languages and skills for softwares like Javascript. Alternatively, if you’re considering a career in data analytics and deep learning, there is also a course for Data Science and Analytics.

On top of acing aptitude tests, you can also equip yourself with a relevant and prestigious degree to show your prospective employers that you possess the necessary qualifications in order to really inch closer to scoring your dream job.

Find out more about UOP courses at Kaplan here 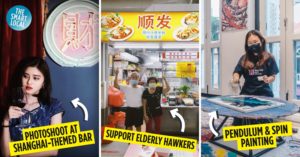 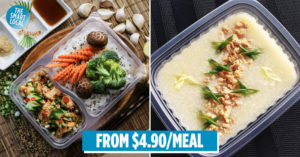