Talk about cryptocurrency seems to have surged overnight, so it’s hard to believe that the idea of it first surfaced in the 1980s. Since then, crypto has grown from an idea to an actual tradeable currency – Bitcoin – worth more than $27k per token.

From its humble beginnings as a pipe dream to the implementation of crypto in retail stores, we track the growth of crypto over the last 40 years:

It’s said that there are about 20,000 different crypto tokens in the world. Of which, only about half of them are still active and in use today. The most famous of them all – Bitcoin. But surprise, surprise, Bitcoin isn’t actually the first cryptocurrency in the world.

To take a look at how crypto first came about, we’ve got to jump back nearly 40 years to 1983. This is when the idea of digital cash was first thought up by David Chaum, a cryptographer. 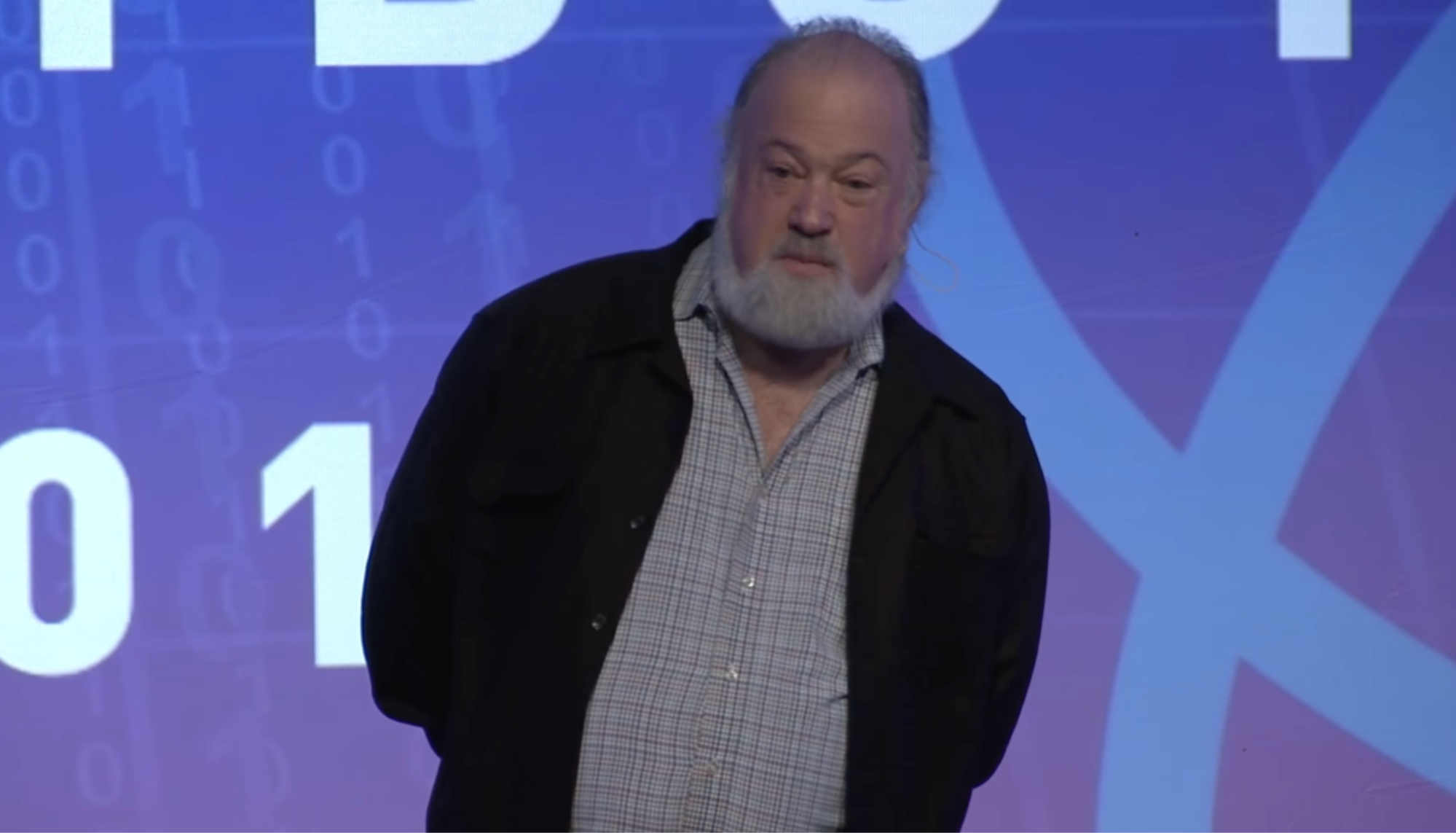 David Chaum, the cryptographer credited with coming up with the idea for cryptocurrency.

Chaum wanted a way for money to be transmitted digitally and privately. Instead of registering personal information to open up an account or share credit card details, users just need specialised software downloaded on their computers to make transactions.

The idea of eCash became a reality in 1989 with DigiCash, which was also started by Chaum. It saw a small wave of success in Europe, but eventually went bankrupt in 1998, as users still favoured credit card payments when making online transactions. Nick Szabo has been suspected to be Satoshi Nakamoto, the eventual creator of Bitcoin, but this has never been proven.
Image adapted from: Swiss Re

While the DigiCash dream fizzled out, headway was being made by others. In the late 90s, Wei Dai, a computer engineer, published a paper for an anonymous electronic cash system called “b-money”.

Nick Szabo, a computer scientist, also wrote about a decentralised currency he called bit gold (not to be confused with bitGold, a gold-based exchange), which would later influence how Bitcoin would be structured.

Not much else happened in crypto until 2008, when a white paper on a decentralised, digital currency was published by an entity called Satoshi Nakamoto. To this day, it is unclear if Nakamoto is a single person or a group of people. 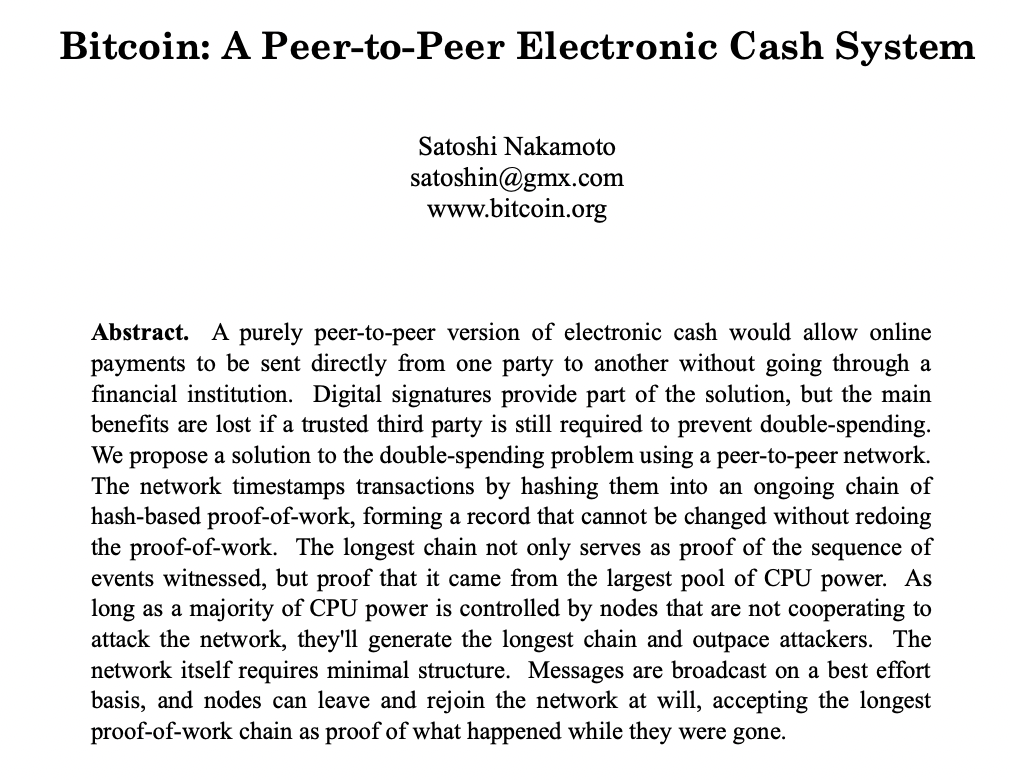 This white paper introduced the concept of Bitcoin to the world, which, unlike eCash, allowed for payments between parties without needing to go through a financial institution.

Following the white paper, Nakamoto also released Bitcoin software in January 2009, an open-source code made for mining Bitcoin. With the software, Nakamoto and anybody else could mine Bitcoin on their own. Laszlo Hanyecz with his 2 pizzas he traded for 10,000 Bitcoins.
Image credit: CoinTelegraph

Currency only holds value when it can be traded for goods and services. This happened just a year after Bitcoin mining began on 22nd May 2010. In a historical moment now known as Bitcoin Pizza Day, Laszlo Hanyecz paid for 2 pizzas from Papa John’s with 10,000 Bitcoins.

Since then, the value of Bitcoin has risen exponentially, reaching a record high of US$68,000 for a single token in November 2021. The price of those 2 pizzas would have been worth US$68 million (~S$97.5 million) then.

Bitcoin may be the one cryptocurrency known by all, but as we now know, many more tokens have popped up since then. Known as altcoins, these can be traced all the way back to 2011. The likes of which include Litecoin, which branched off from the Bitcoin blockchain and Ethereum, which is now the second largest cryptocurrency after Bitcoin.

Adoption of cryptocurrency in Singapore

When you have celebrities like Matt Damon, Kim Kardashian, and of course, Elon Musk mention crypto in countless Tweets they post, it’s no surprise that cryptocurrency has seen a steady increase in worldwide ownership. It’s estimated that about 4.2% of the world’s population or about 320 million people own cryptocurrency.

Closer to home, the figure varies for crypto ownership in Singapore. Some reports state that about 1 in 5 own crypto in Singapore, while others estimate the figure to be much smaller at just over 280,000 people. 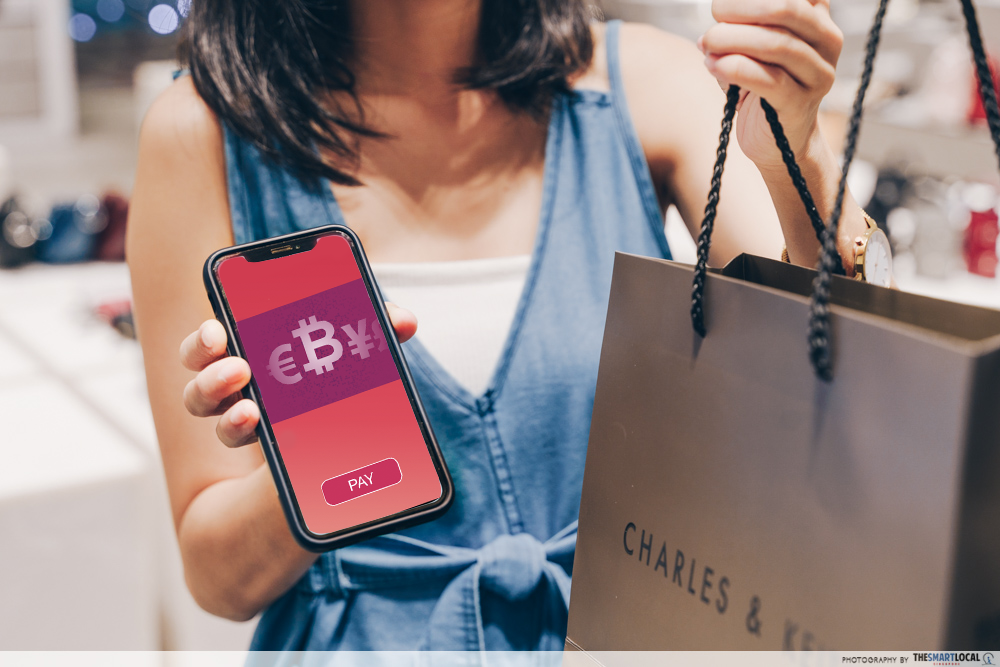 Regardless of the figure, multiple surveys do show that sentiments about cryptocurrency generally run positive. Many are sure that crypto will be widely adopted and used as a form of payment in the future.

One thing that has contributed to the rising number of crypto owners in Singapore is the ease of access to digital asset trading platforms. These are designed to trade fiat currency – usually the Singapore or US dollar – directly with cryptocurrencies like Bitcoin, ether, and memecoins such as Dogecoin and Shiba Inu coin. 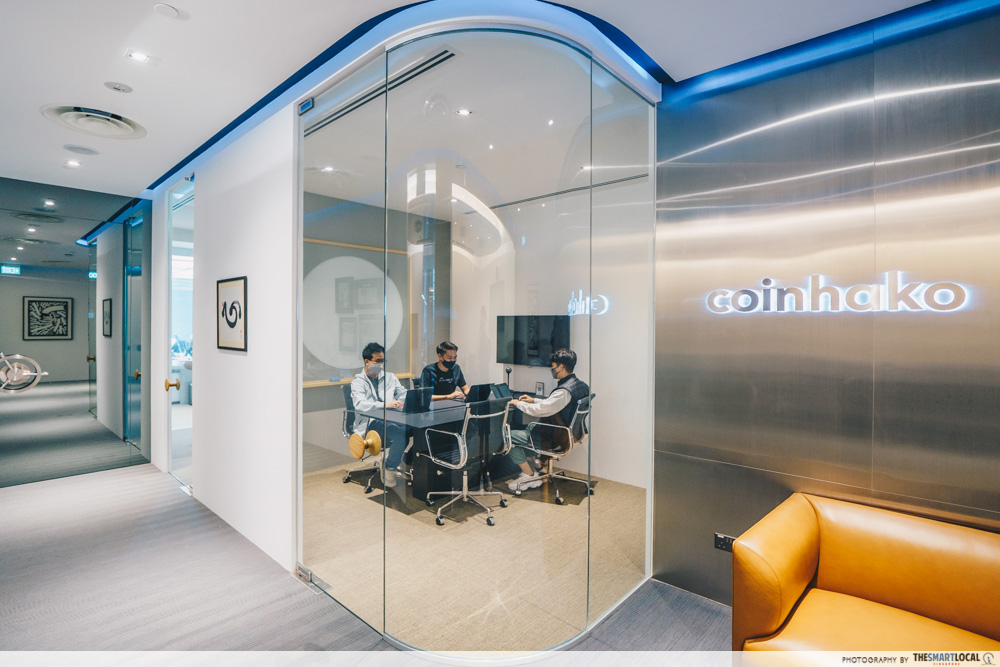 The platform was born out of the 2 co-founders’ desire to invest in and buy Bitcoin in Singapore. Current Chief Technological Officer Gerry Eng manages the technical side of the business, while his NS buddy and business partner Yusho Liu helms the role of Chief Executive Officer to handle the business development front.

Since then, Coinhako has grown to become one of the biggest trading platforms for crypto in Singapore. Last year, they hit a record trading volume of S$7 billion. User growth has also grown to 400,000 since its inception.

On the platform itself are more than 60 cryptocurrencies available that users can buy and sell using fiat currency. There are even options to trade tokens with each other like Bitcoin for Theta and vice versa. 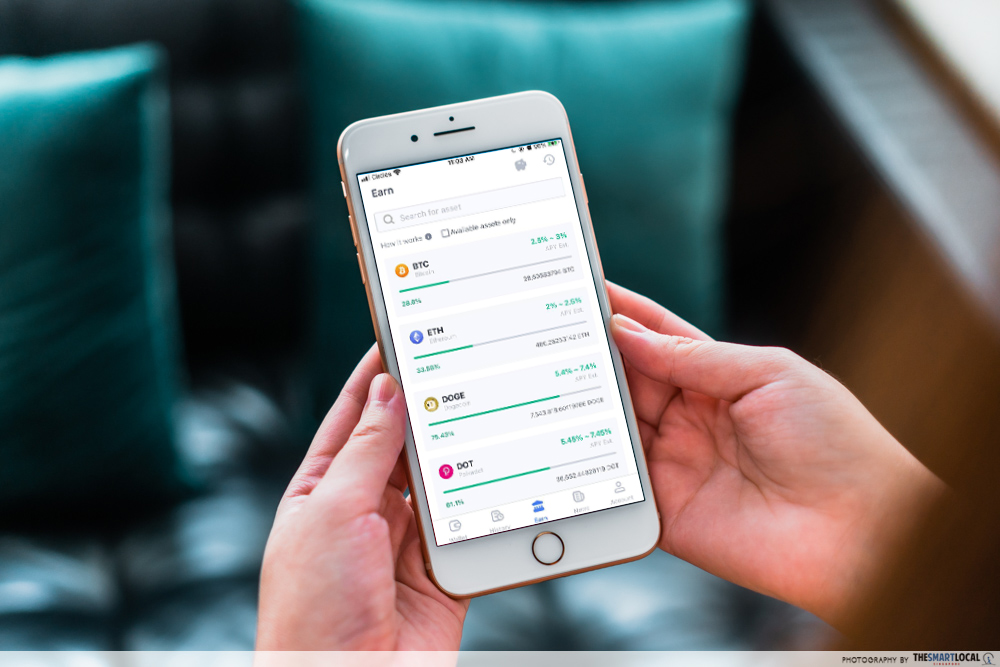 The cryptocurrencies you’ve bought don’t just lie dormant on your Coinhako platform. A number of supported tokens, including the USD Coin, Decentraland, and Zilliqa can be used as actual currency. These are stored in the platform’s wallets where you’ll be able to send and receive these crypto.

Coinhako has even ensured proper regulatory compliance under the Monetary Authority of Singapore (MAS). They were granted a Major Payment Institution licence to offer Digital Payment Token Services under the Payment Services Act. This licence allows users to perform payment transactions directly using the Coinhako platform.

Use of crypto in Singapore

In Singapore, crypto payment was pioneered in the F&B sector. Cafes and even a kopitiam in Funan were accepting crypto payments for a period of time. The number of such eateries that accept crypto has since dwindled down but there are a couple that are still around.

For those heading out for a meal but have already depleted cold hard cash resources, Joo Bar lets diners pick up their tab with Bitcoin. There’s even an ongoing promo for diners to receive “cashback” for 5% in Bitcoin when you pay more than $150 in the cryptocurrency.

Japanese omakase diner Maison Ikkoku is another place that accepts cryptocurrency as payment. The restaurant regularly hosts crypto brunches, where diners are encouraged to spend only in crypto – Bitcoin, Ethereum or Binance Coin – for a selection of canapes. 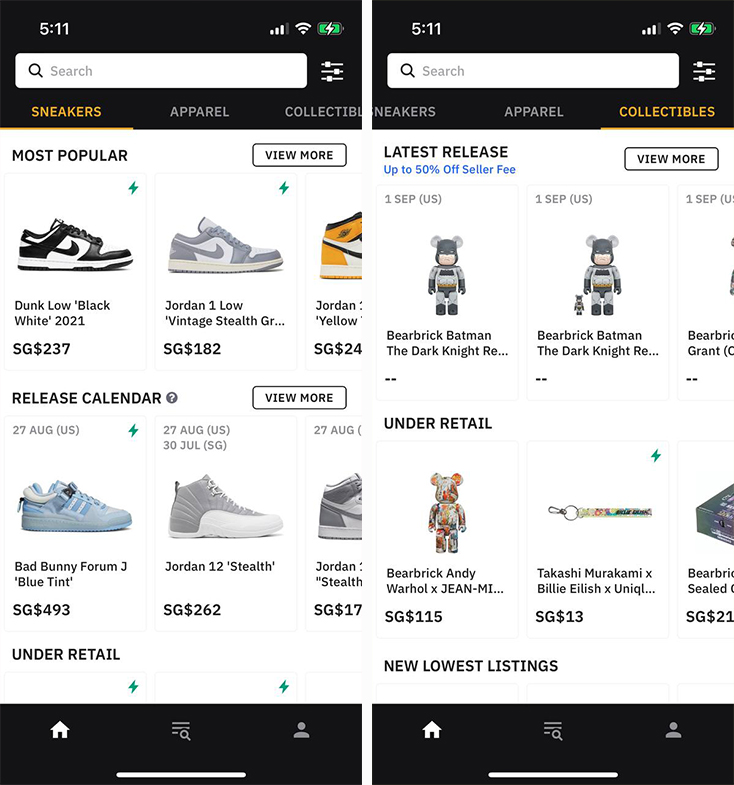 In retail, fashion outlets in Singapore like Charles & Keith and NovelShip are already accepting crypto payments when you shop online.

The future of crypto in Singapore

Use of crypto may seem limited in Singapore for now, but for good reason. MAS has released comments on growing Singapore as a crypto hub, saying that there is room for digital asset innovation to grow, but not for crypto speculation.

For now, there are concerns surrounding crypto speculation, which MAS is looking into:

Despite this, MAS believes that decentralised finance will become part of the norm in Singapore’s future. That isn’t to say that we’ll see crypto taking over all financial institutions, but it is likely that crypto payments will be a concrete option for consumers in time to come.

The continued growth of crypto with Coinhako

Although the trajectory of crypto remains uncertain in Singapore, one thing’s for sure, Coinhako will continue to be part of the digital assets landscape this side of the equator.

With plans to expand to other markets, Coinhako has even stepped up hiring talents not just in Singapore but in Vietnam as well. While it’s considered an up and coming tech company to work for, many of its high-potential jobs don’t require expert knowledge in crypto to apply, although having an in-demand skill would be a plus.

You’ve just crammed 40 years of crypto history in the past 10 minutes. Now, it might be time for you to write about crypto’s future for the next 40 years by signing up for a career with Coinhako.

Find out more about Coinhako here