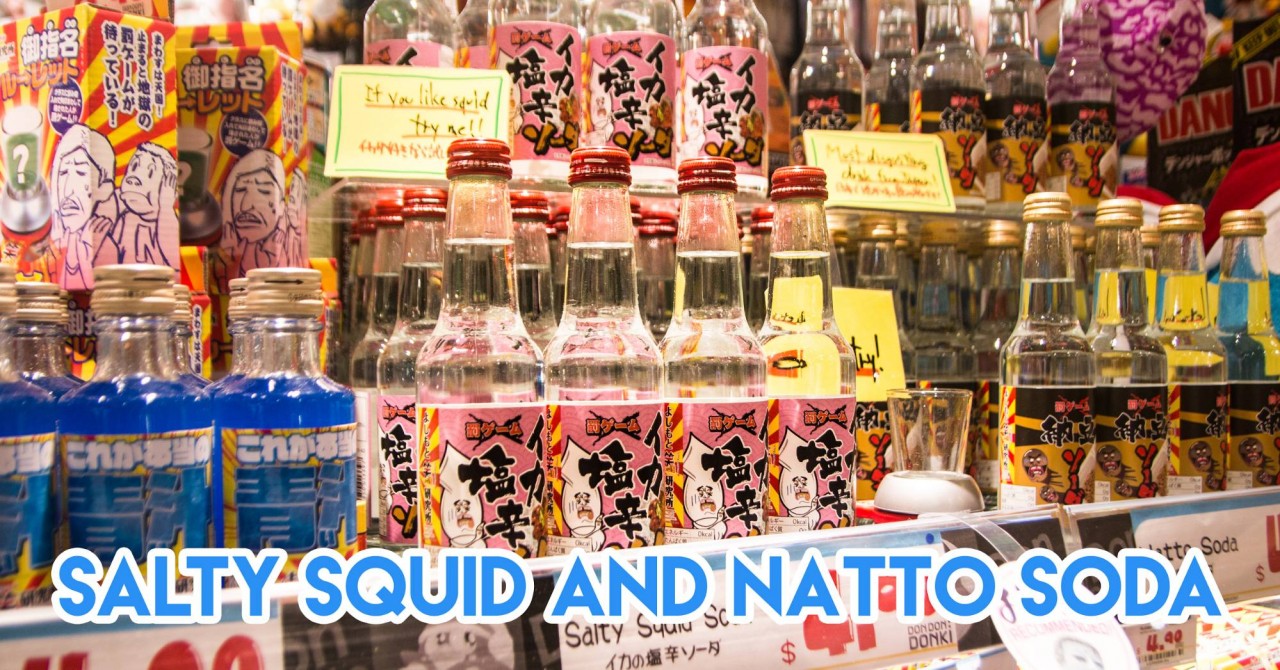 It’s no secret that many of us Singaporeans go crazy for anything J-related. And it seems like the Japanese know that too – seeing as we’ve been blessed with megastores like Daiso, Muji, Tokyu Hands, and most recently, Lumine for our fix of all things Japanese.

Now, joining that list is the long-awaited Don Don Donki – the first Southeast Asian outlet by Don Quijote, Japan’s largest discount store. Being open 24 hours and stocked high with a hodgepodge of food, beauty, and lifestyle items from the land of sushi, it’s basically a Japanese version of Mustafa.

Since the Japanese are known for all things crazy and novel, we’ve picked out a couple of the quirkiest items you can get there: 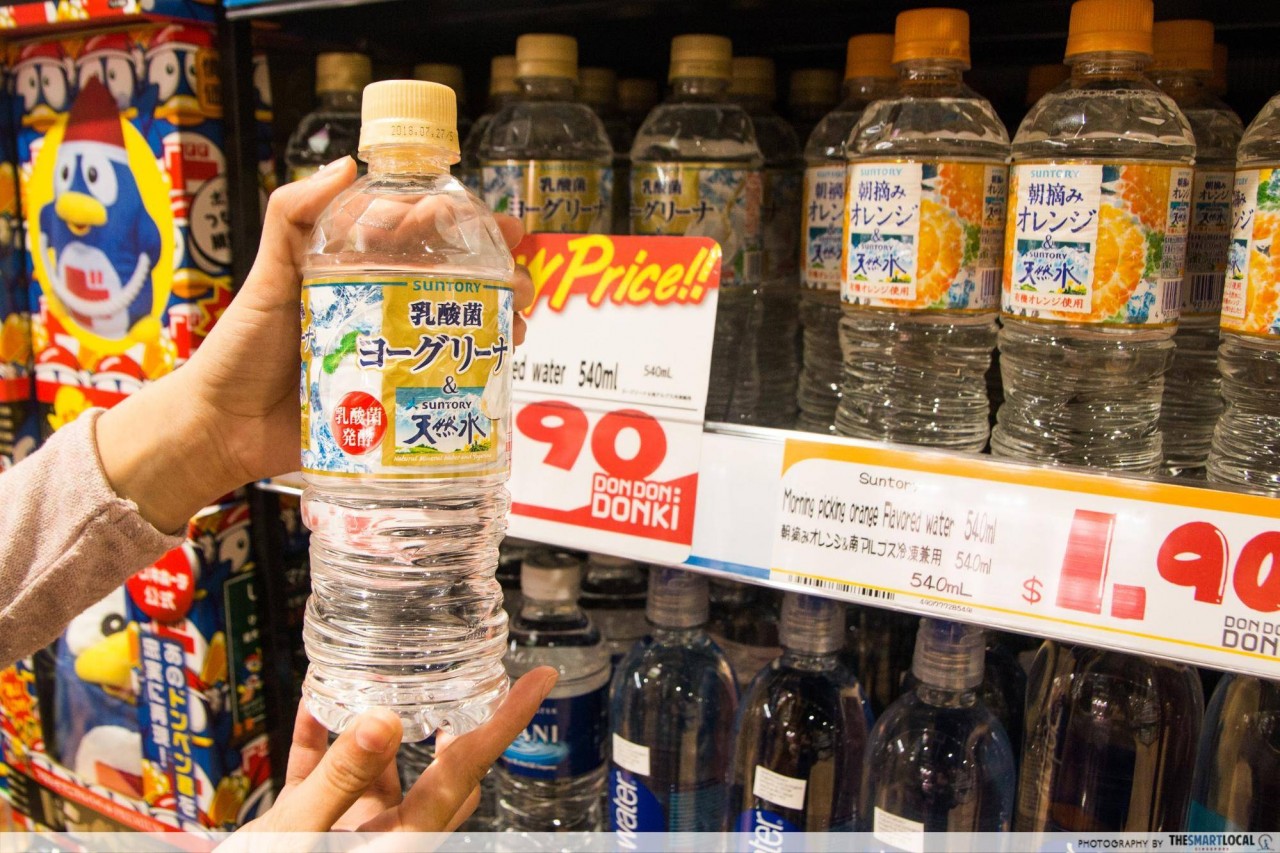 Without reading the label, you might mistake this Suntory yogurt-flavoured water for regular ol’ mineral water; after all, it’s completely clear and looks no different from H20! Fans of Yakult will enjoy this, as it’s like a thinner, lighter version of the dairy beverage. 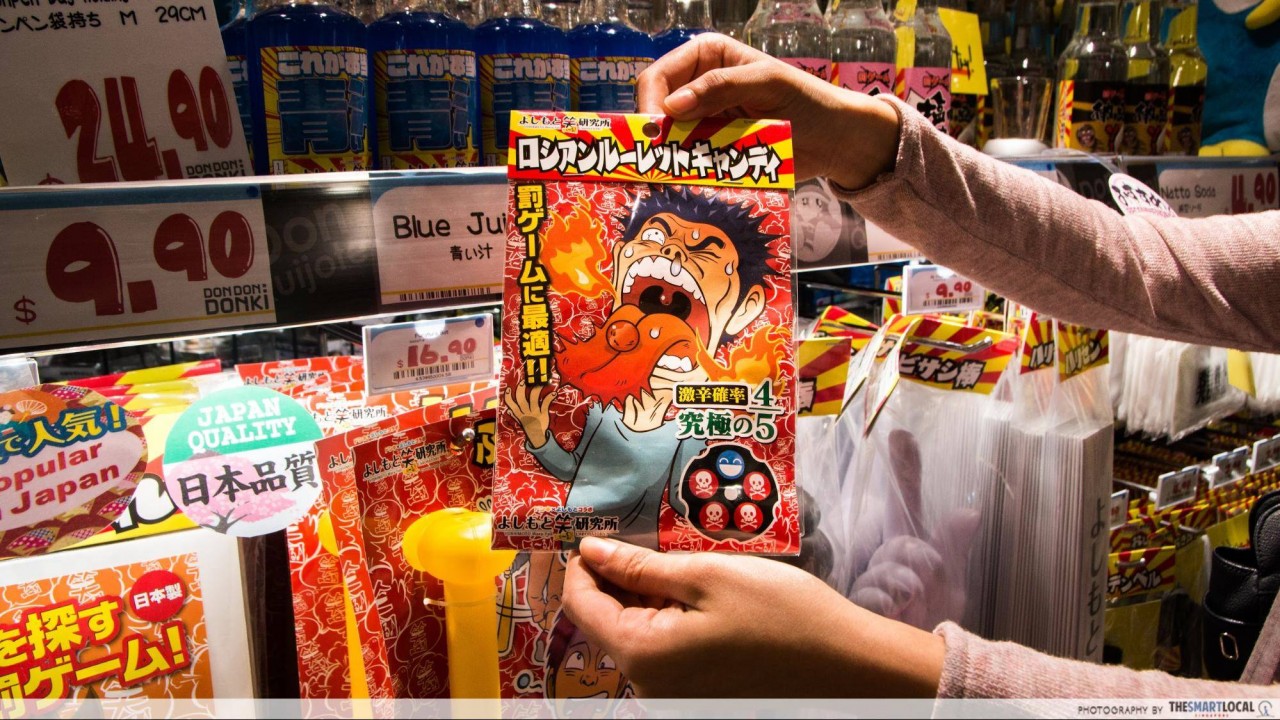 Instead of involving alcohol, here’s a more family-friendly way to play Russian Roulette: with candy. 4 out of 5 pieces of candy in this packet are spicy, so high chances that the odds won’t be in your favour. 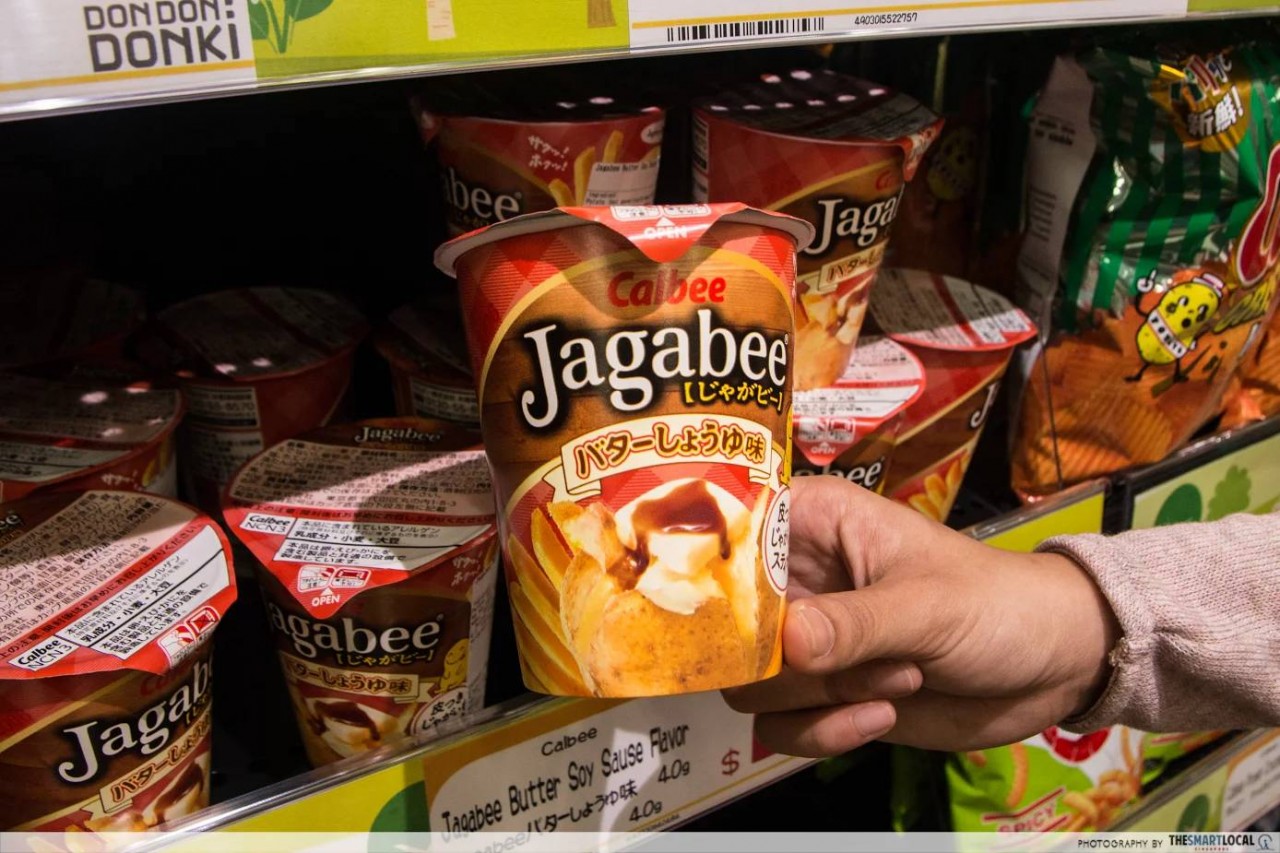 Unfortunately the Cod Roe and Cheese Jagarico cups were wiped clean before we could get to them, but we were still lucky enough to snag the Butter Soy Sauce Jagabee – something we haven’t seen alongside the usual Original and Purple Potato ones in regular supermarkets.

These weren’t overly salty, and had a pronounced buttery flavour. Super addictive. 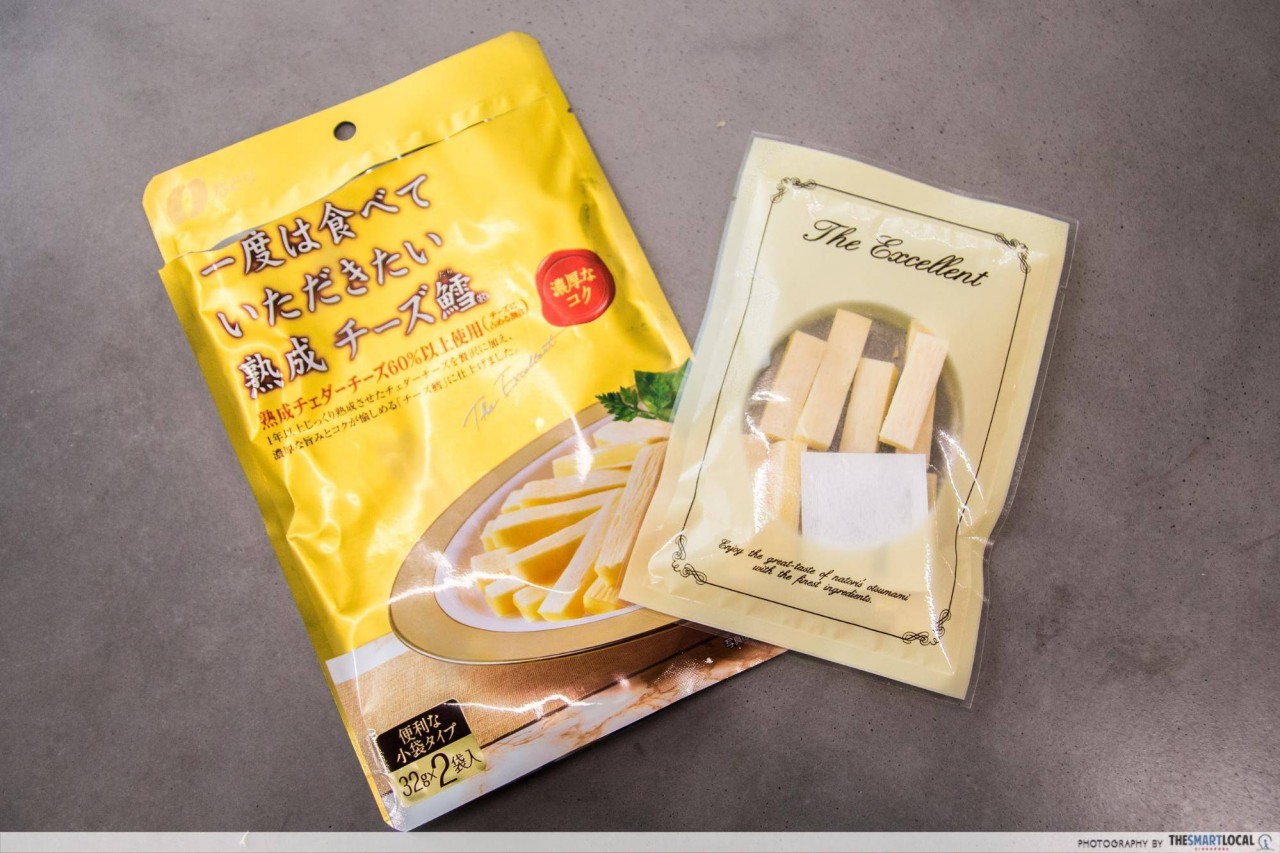 The thought of dried cod fish and cheese made into a stick may sound repulsive, but don’t knock it till you’ve tried it! We were expecting the sticks to look and smell like kiam he (salted fish), but these turned out surprisingly atas.

In fact, if we hadn’t already known, we wouldn’t have guessed that fish was part of the ingredient list. If anything, all you’ll taste of the cod is a slightly sharp, salty aftertaste.

Nibble on these with a glass of red wine in hand and you’re all set for the fancypants life. 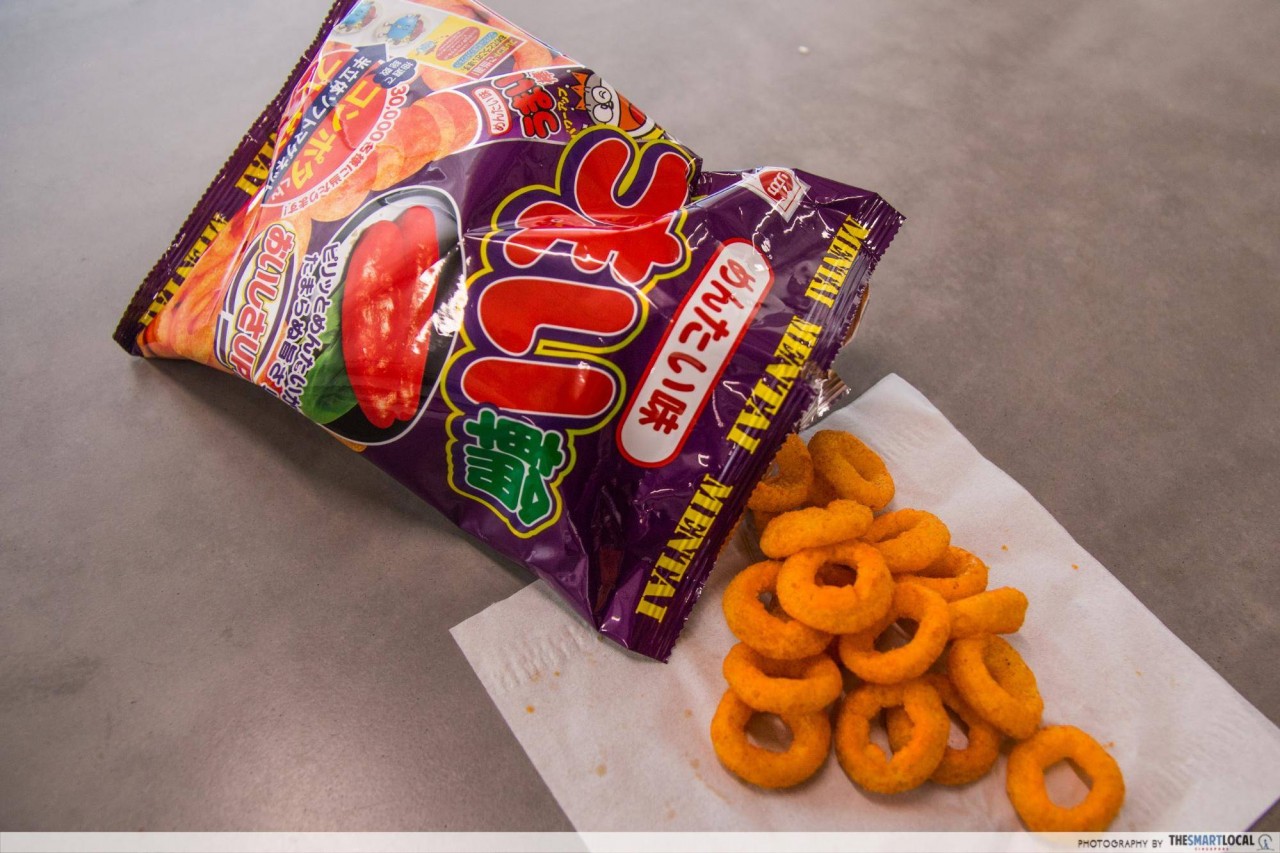 Move over, Cheese Rings – ‘cause now we’ve got Mentai corn rings to munch on. While these tasted more like bonito flakes than mentai, they did have a special umami flavour. 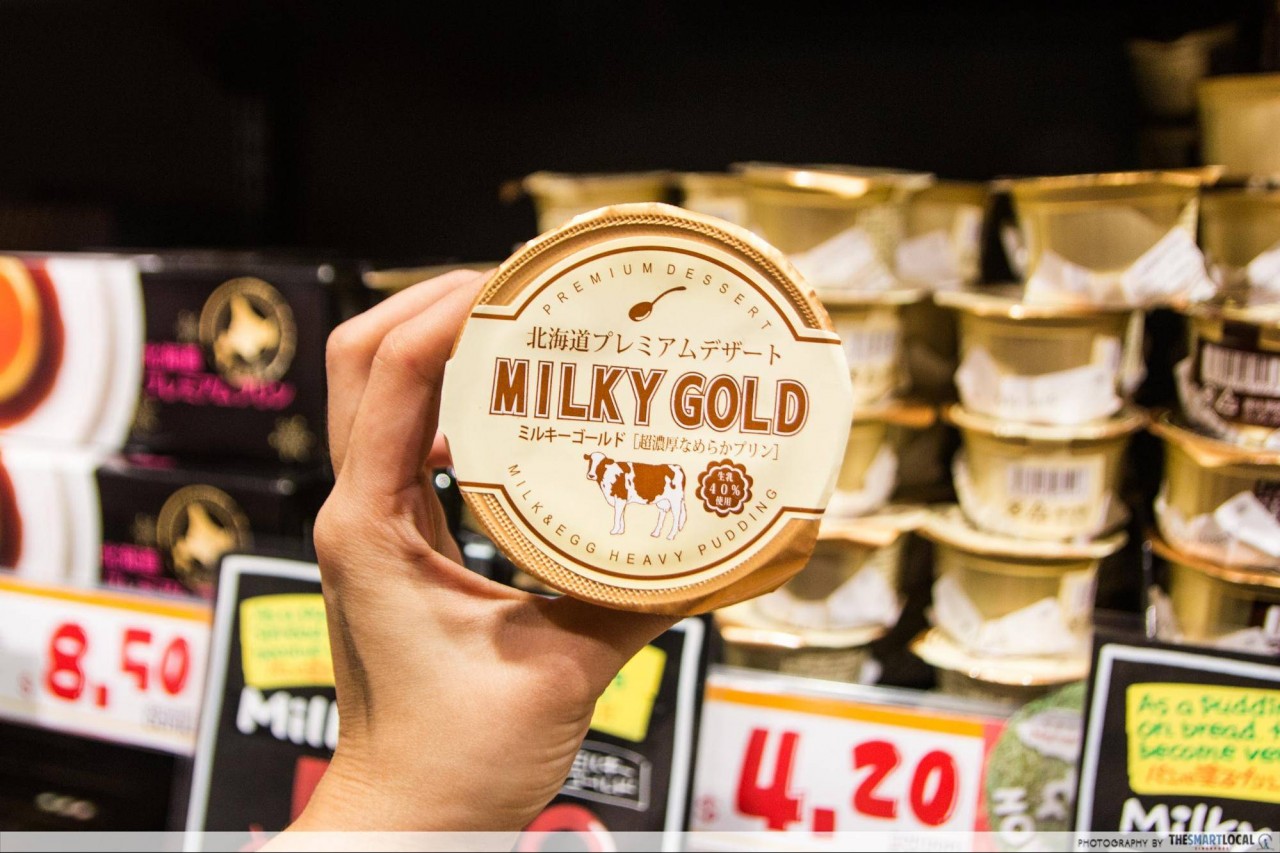 Those who like to start their mornings with something sweet will take a liking to Milky Gold, a pudding spread for bread. It’s got a thicker consistency than regular pudding, with a slight hint of caramel. Because it’s so rich, a little will go a long way, so go easy! One cup might last you half a loaf or so. 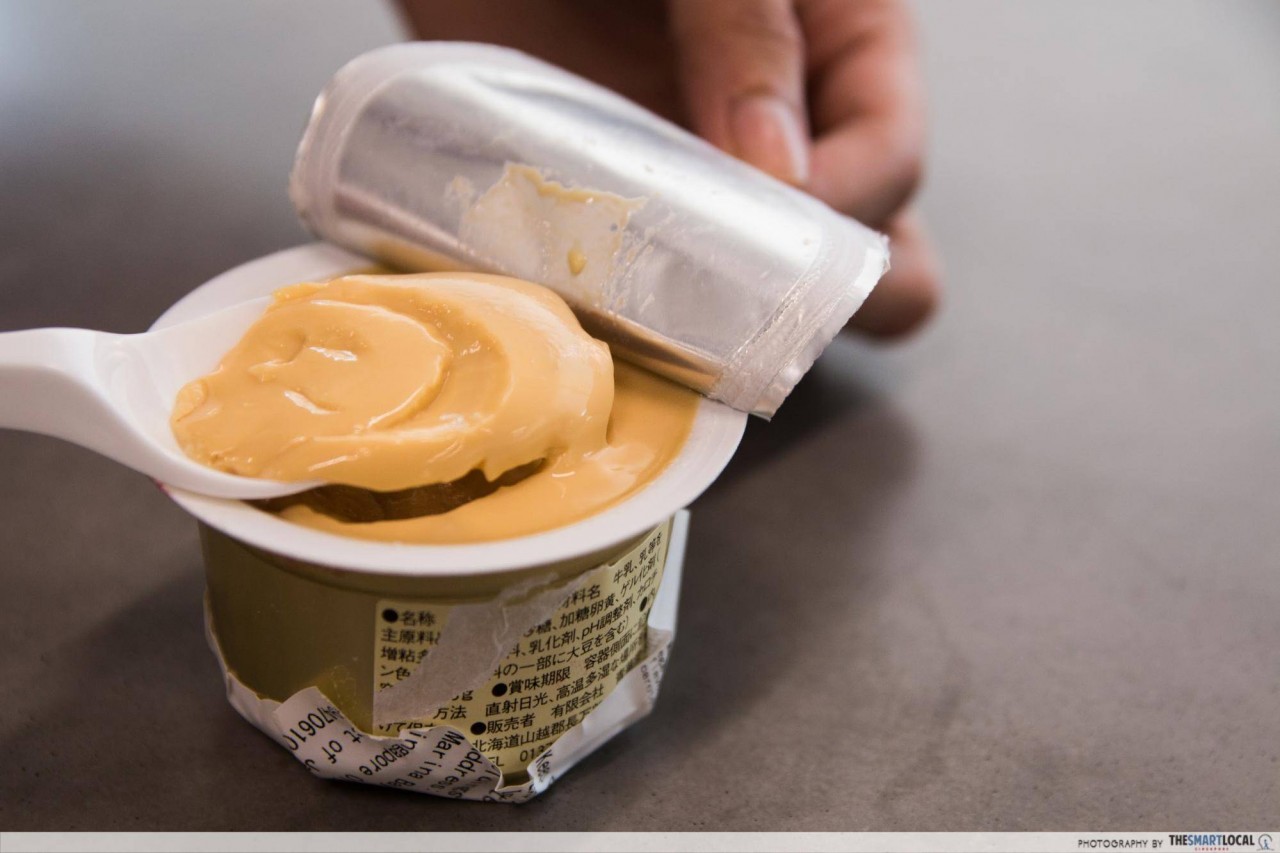 If you’ve got a mega sweet tooth, this is also yummy enough to eat on its own. Just beware of the sugar rush that might follow! 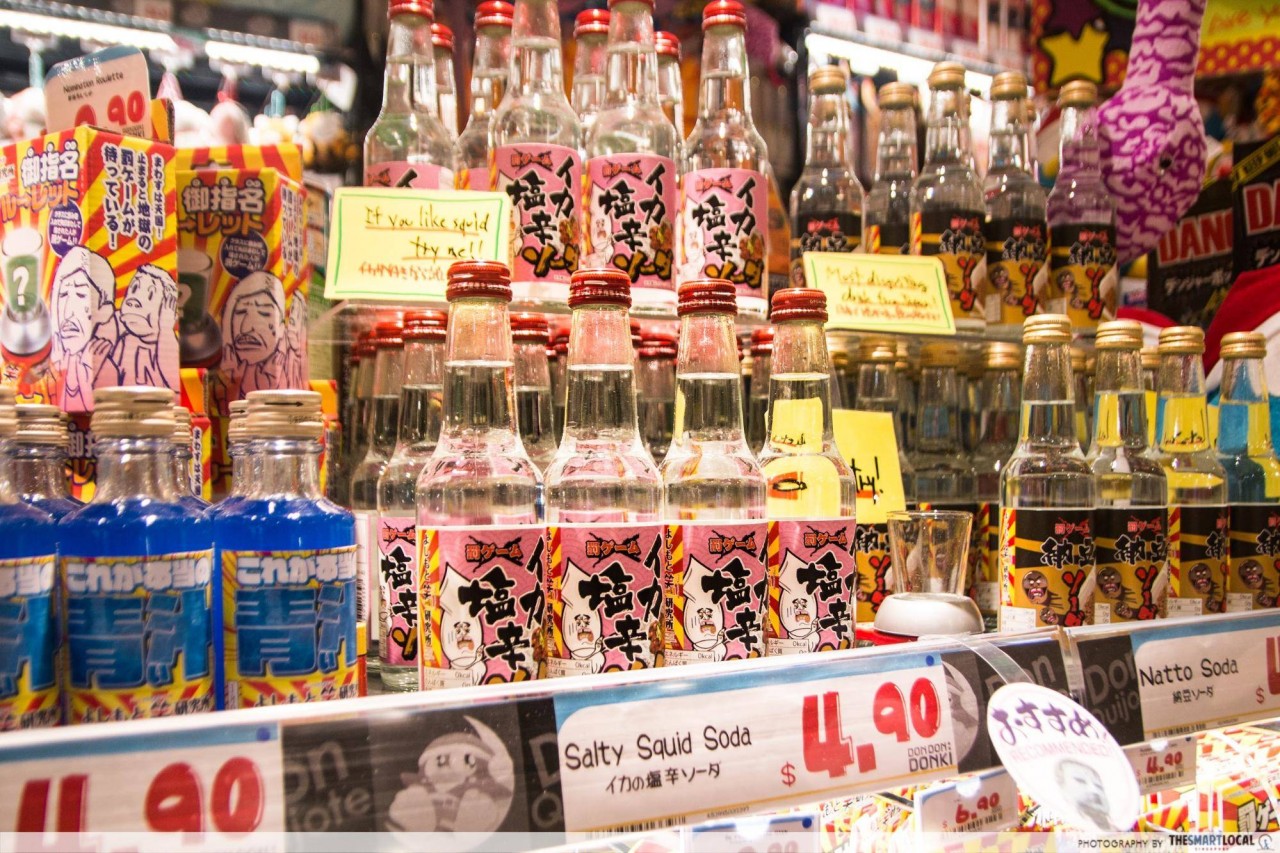 Fruit soda is NBD, but Salty Squid soda? You might as well give this a try while here since you won’t find it anywhere else in Singapore!

The carbonated beverage didn’t exactly taste like squid, though it did have a briny, fishy flavour – similar to the water that’s left in the shells of scallops after you slurp up the flesh. 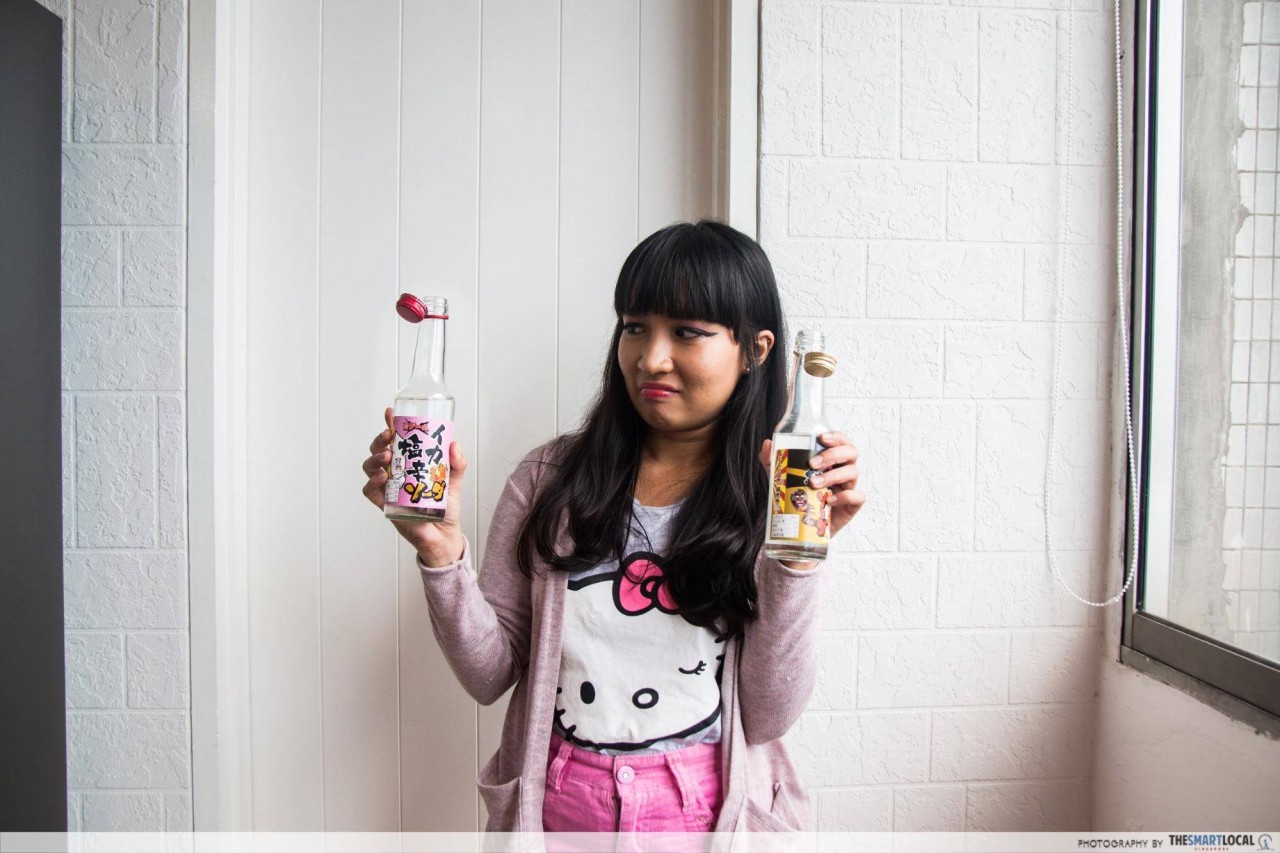 Warning: don’t open the Natto soda bottle too close to your nose if your gag reflex is easily triggered by foul odours. Not gonna lie, this smells RANK. But if you’re able to get past the sourish stench, it actually tastes pretty interesting. Strange as this sounds, many of us agreed that the aftertaste was reminiscent of coffee cookies.

Fun fact: store labels claim that the Salty Squid and Natto sodas are the third and first most disgusting drinks in Japan respectively. Wonder what the second is. 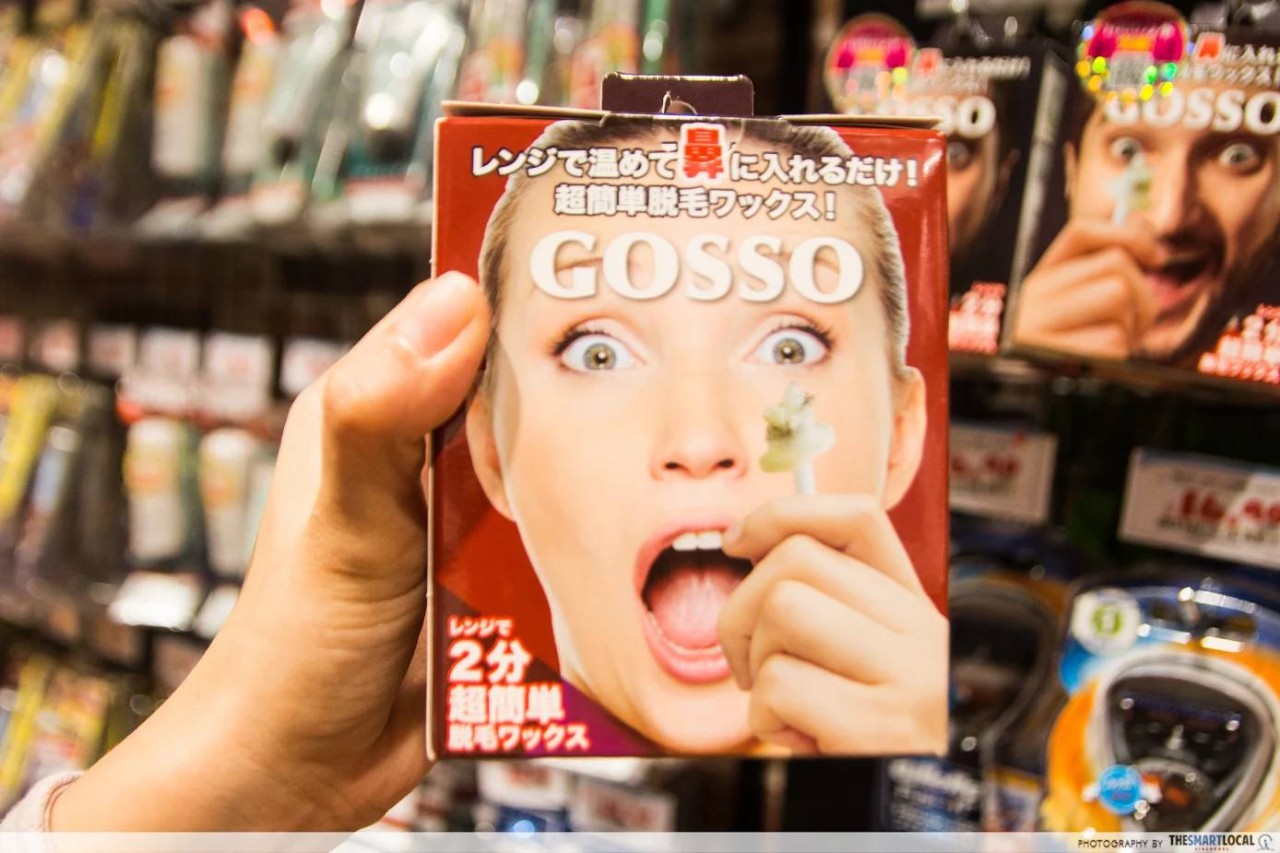 When talking to others, you want them to be focused on the important things you’re saying – not that errant strand of hair that’s creeping its way out of your nostril. Tweezing can be tricky and using a scissors won’t tackle the root of the problem, so here’s the Gosso nose hair remover as an alternative.

As the image below explains: dip the stick into the gooey paste and put it up your nose. Yank it out when it dries and viola – you’ll be free of unwanted nose hairs. And perhaps some boogers too. 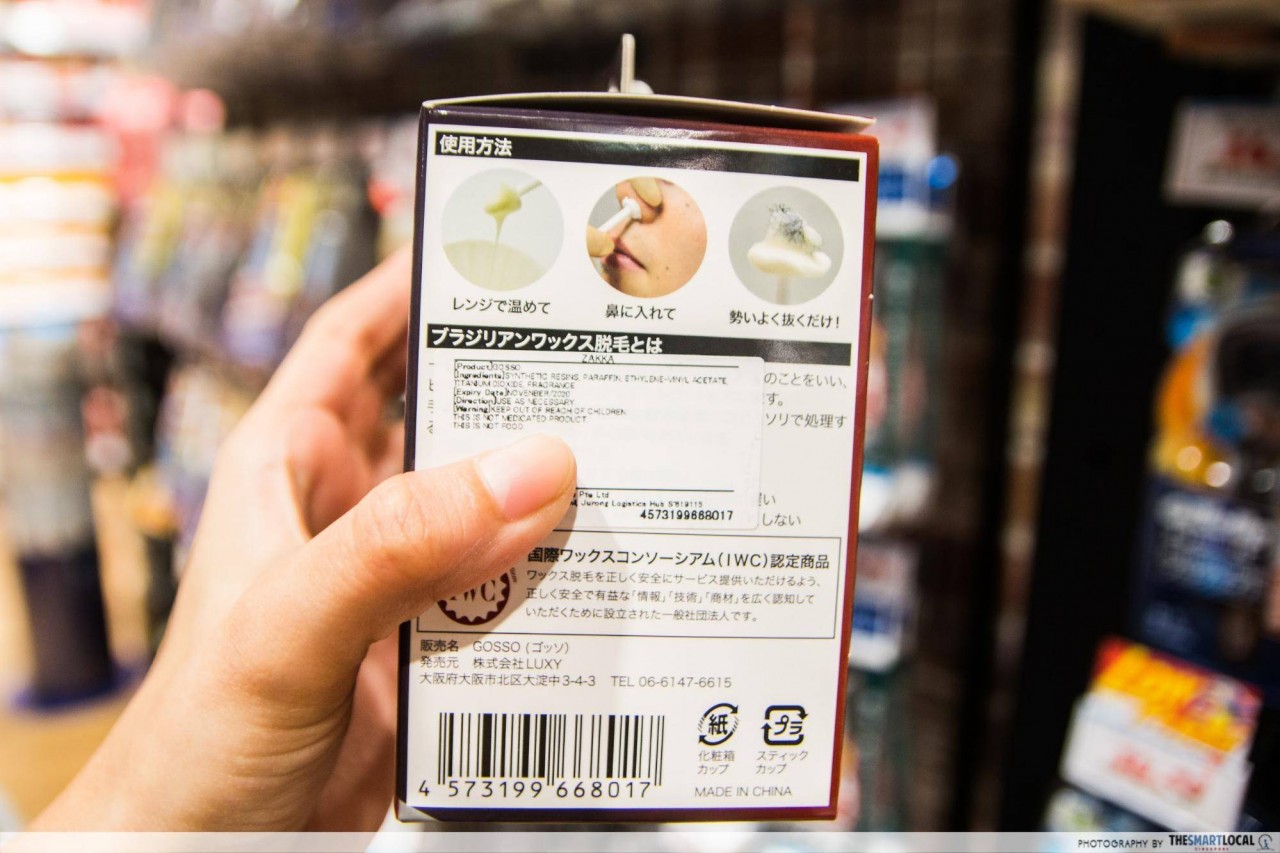 9. Koizumi 2-Way Base Care and Gel Off kit

Many of you ladies would know the struggle that comes with removing a gel manicure – you either pay a whopping $15 for a soak-off, or slowly pick at it in a feeble effort to make it chip away. This Koizumi nail kit might just be your saviour, as it’s said to be able to get rid of stubborn gelish. 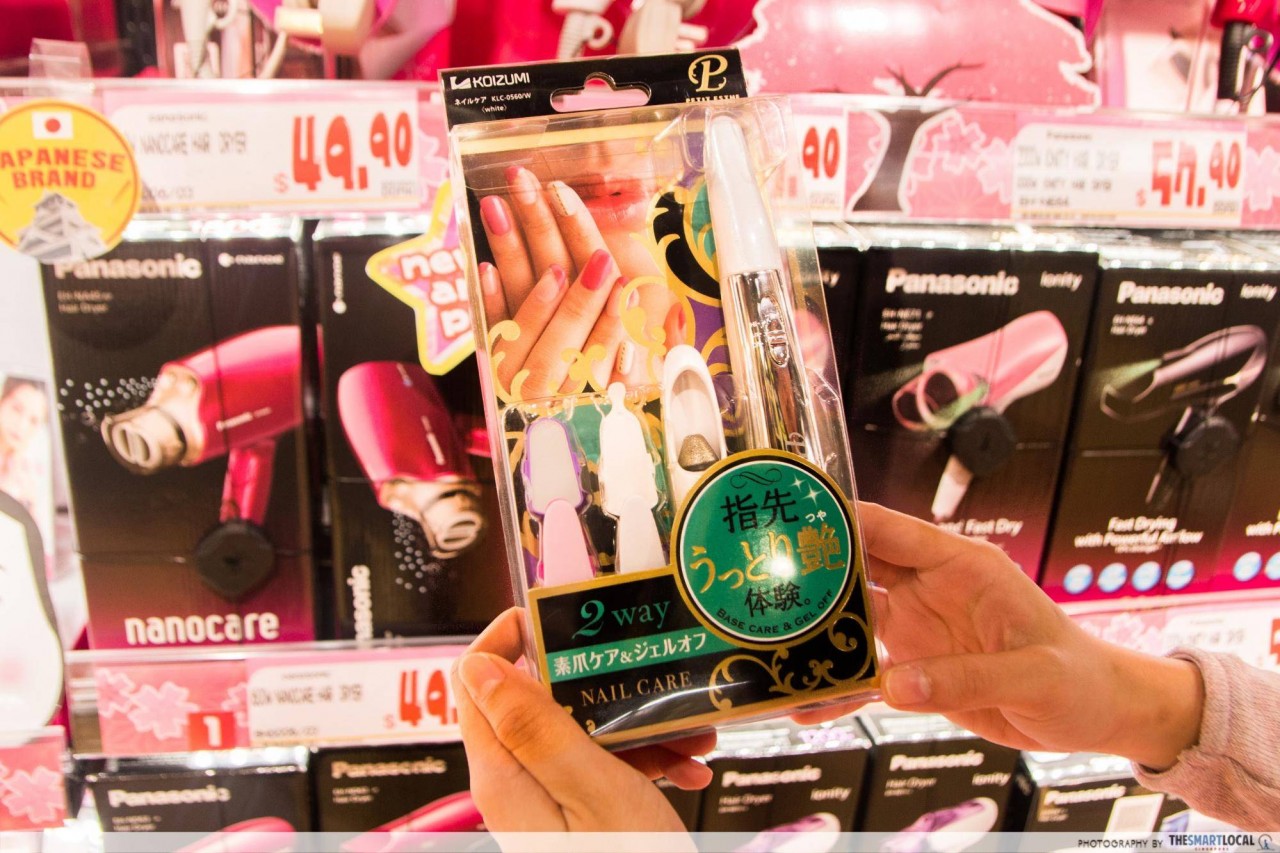 It’s also meant to provide base care for nails that have been made dry and brittle from excessive manicures. 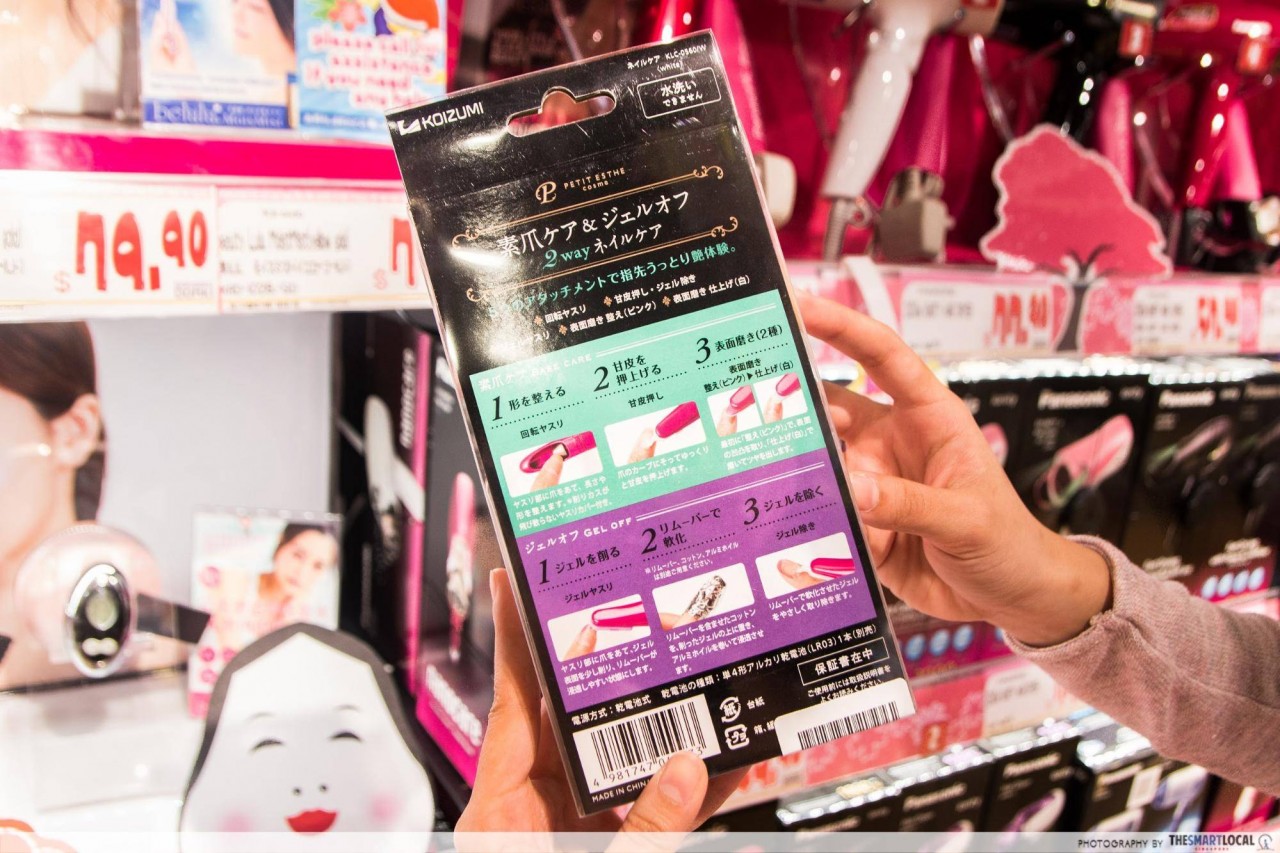 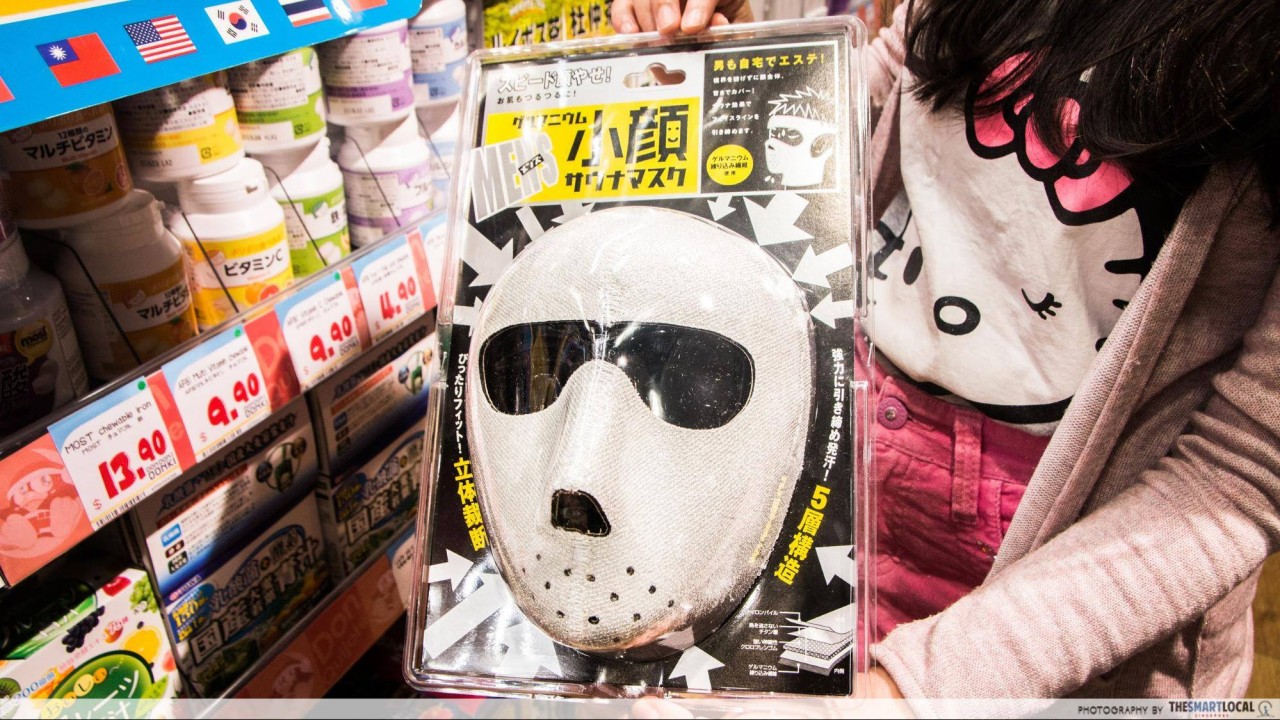 Men who’re trying to achieve a sharper profile without going under the knife – this one’s for you. Apparently, this 5-layer mask acts as a “sauna” for your face and neck, encouraging perspiration and eventually making your face appear slimmer.

It could also double up as quick and easy “Friday The 13th” cosplay. 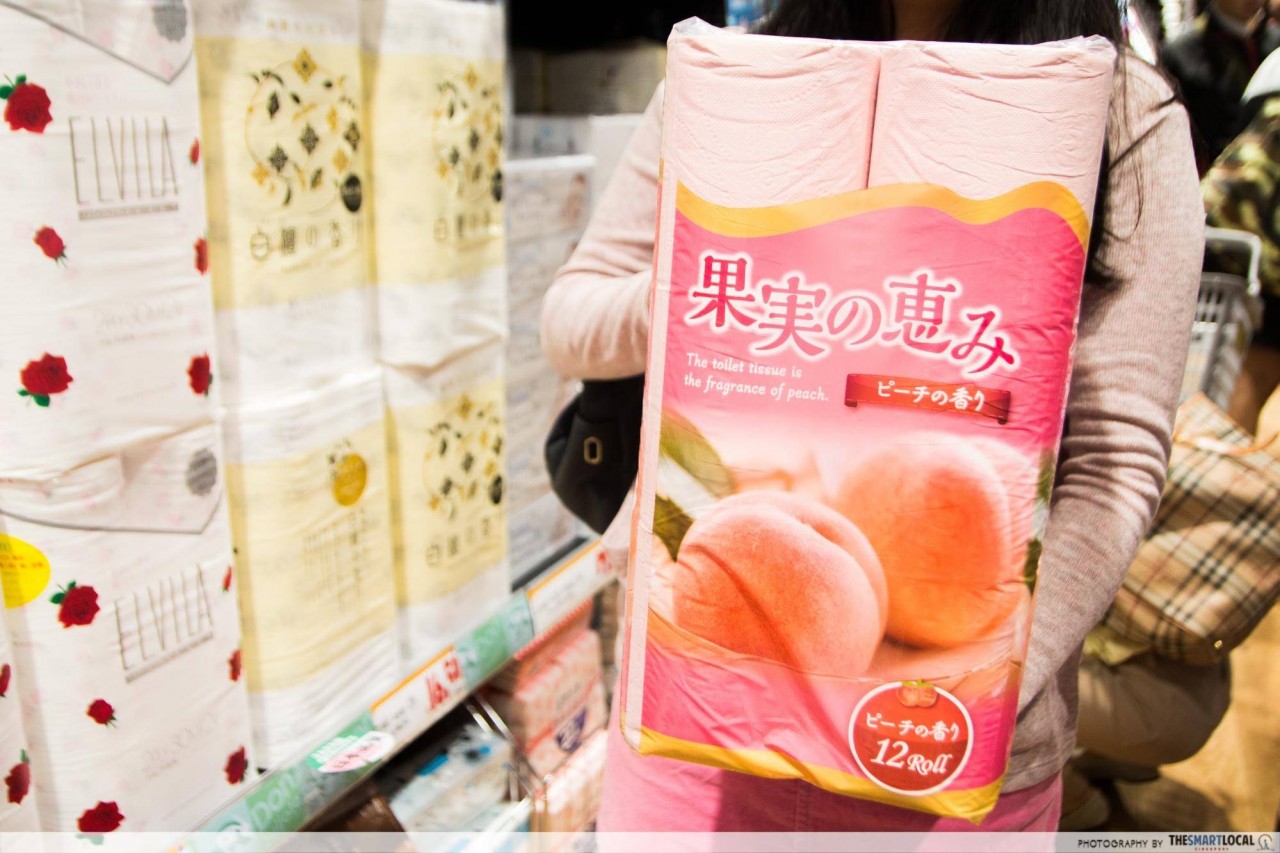 If you’re going to be the king or queen of the, ahem, white throne, you best be sure that your bum gets the royal treatment too. No, toilet paper with embossed flowers won’t do – what you need is some dainty pink TP that smells like peaches.

Presumably for the way it’s shaped, the peach emoji has become a symbol millennials use when implying someone is bootylicious, but this really takes things to a whole new level. 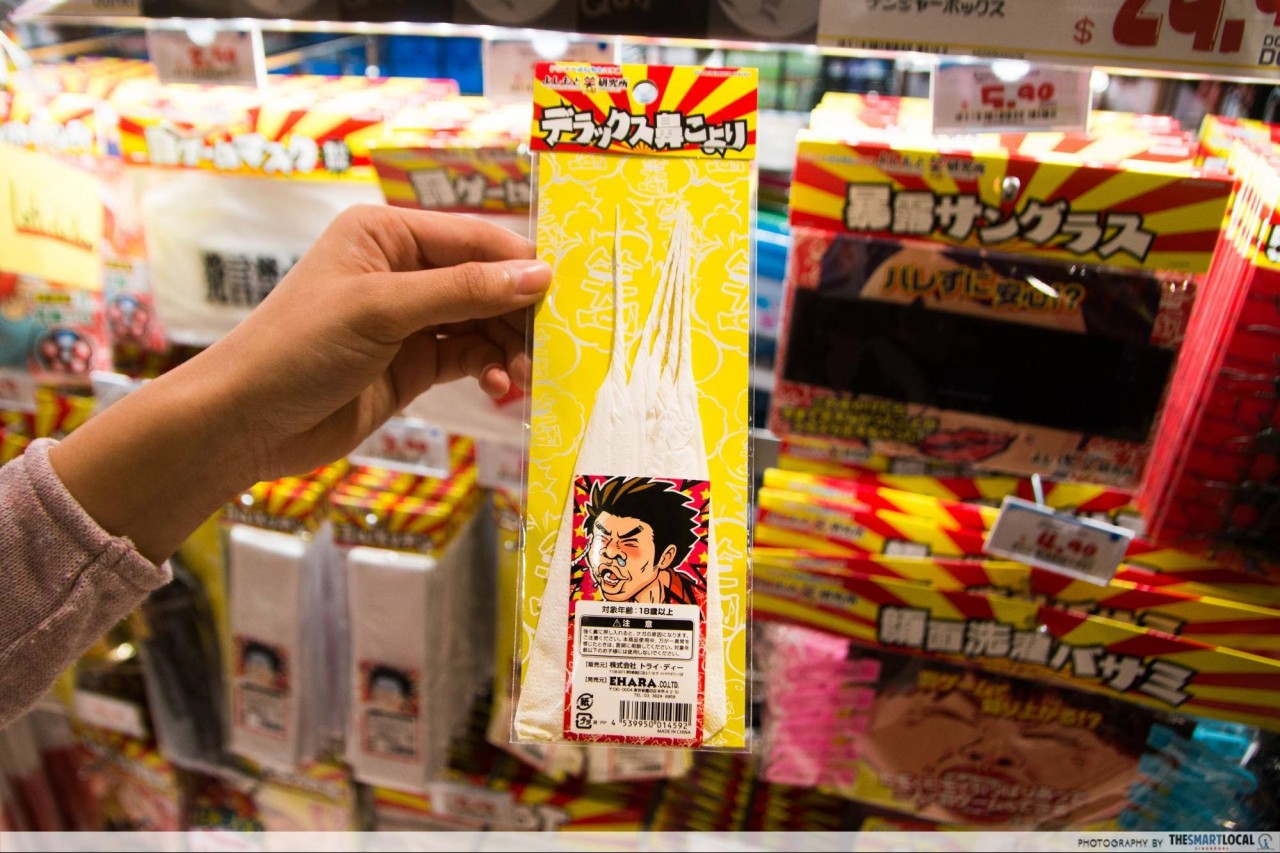 You probably have that one friend who has a sinus problem so bad that having bits of tissue stuffed into his nose is part of his daily aesthetic. Here’s something that will save him the hassle of twisting his tissue to size – the pre-rolled, Deluxe Paper String that’ll fit any nasal cavity comfortably. 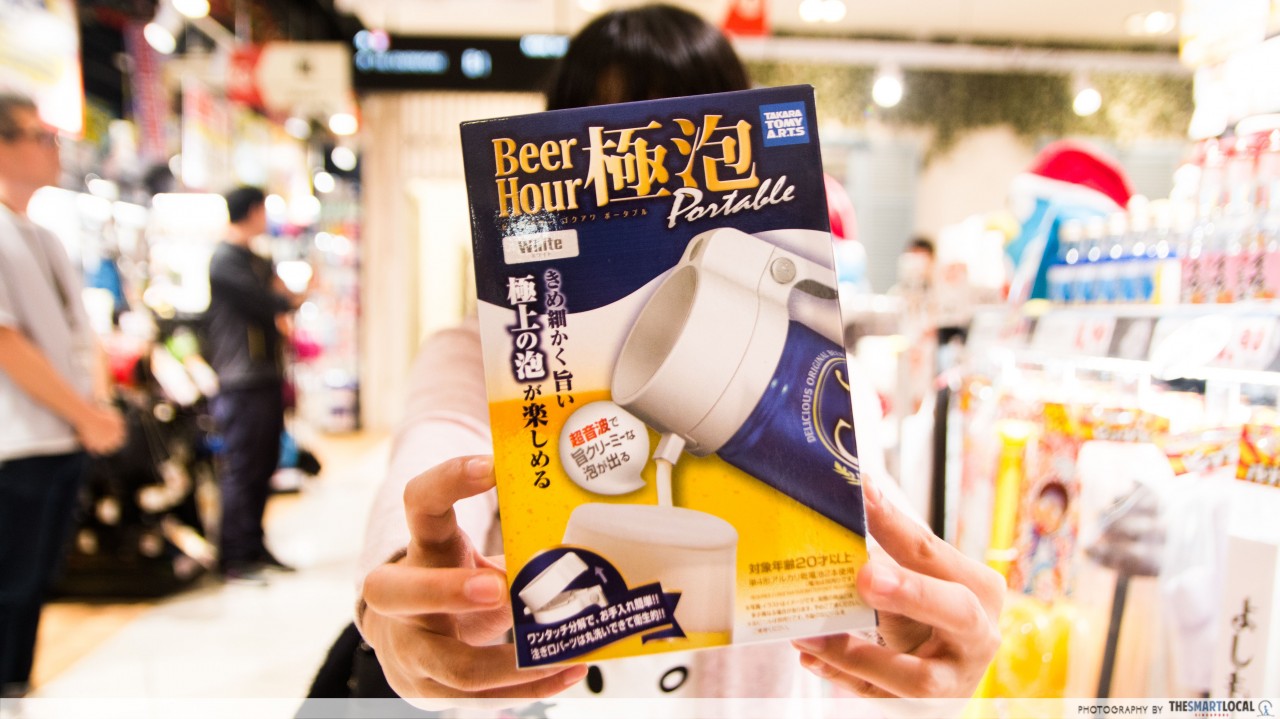 Beer is always more satisfying when it’s frothy at the top. For parties with your crew, take along this nifty portable beer foam maker and you won’t have to deal with flat booze. Just load the tumbler up with your drink and pour it out, and the nozzle will somehow magically produce creamy foam. 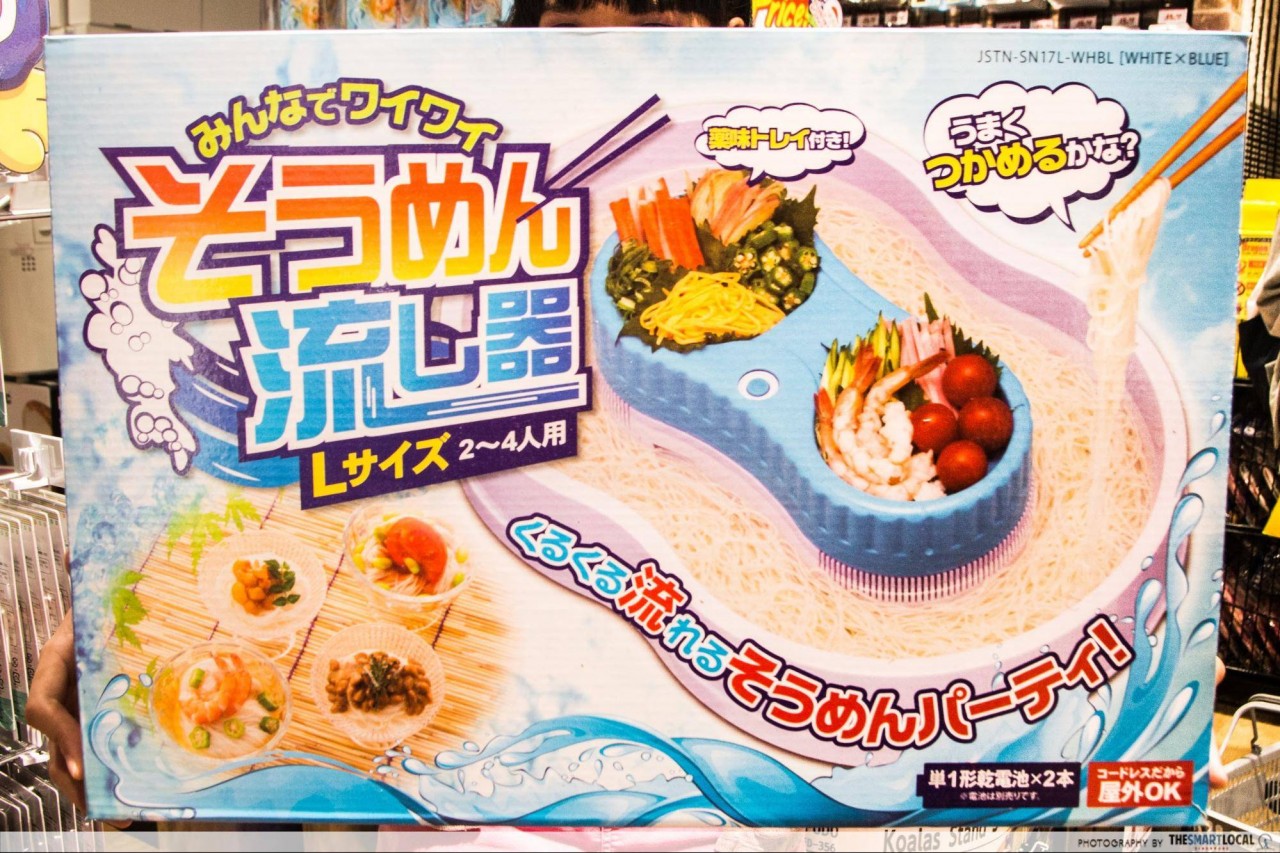 You might’ve seen videos of diners in Japan fishing out their Nagashi Somen noodles from water slides made from bamboo. While not quite on par with those long chutes, this Somen Slider Nagashi machine still lets you experience the fun of catching your food as it zooms along. So go on and bust out your mad chopstick skills!

Best part: this device has no tangly wires. Just pop in two AA batteries and you’re good to go. 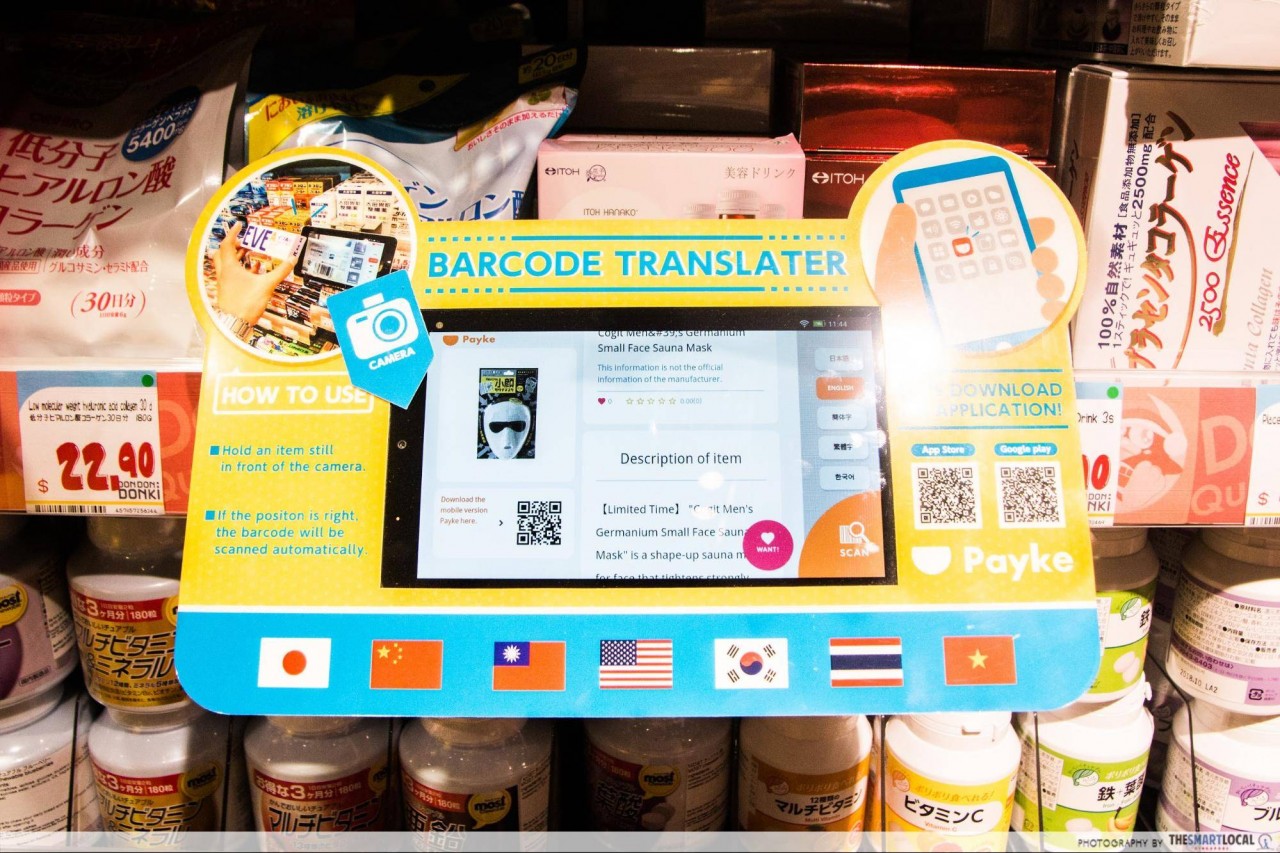 A lot of the product packaging at Don Don Donki is in Japanese, but despair not if you can’t read a word of it. Simply scan the item’s barcode using the Barcode Translators peppered throughout the store, and you’ll get a detailed description in English – right down to ingredients or materials used.

Most interesting items at Don Don Donki in Singapore 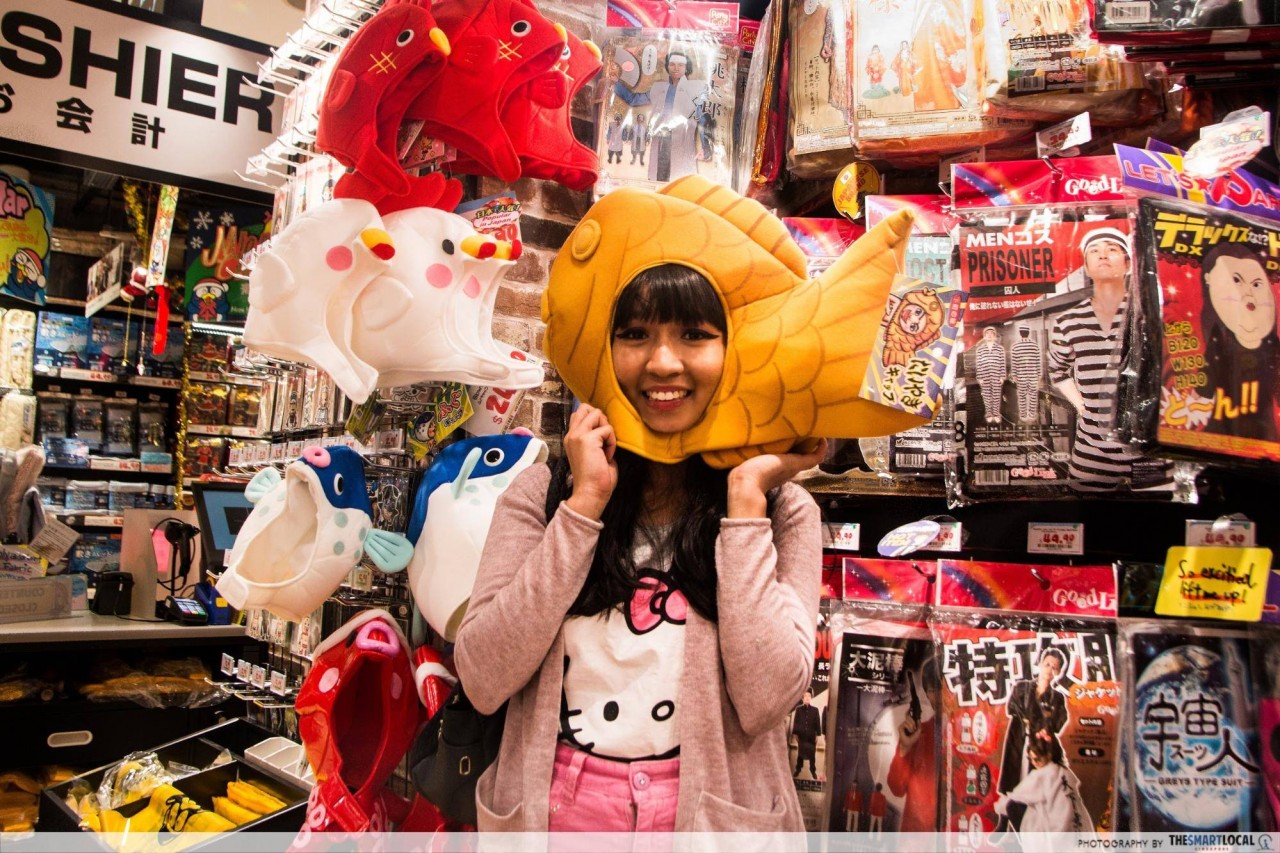 Other than these wacky products, there’s a whole slew of other Japanese goodies in store – from Sailormoon cosmetics, to instant ramen in tons of flavours, and even ready-to-eat meals under $5.

Whether you’re a hardcore Japanophile or otherwise, one thing’s for certain – Don Don Donki‘s giant range of intriguing items will have you saying, “sugoi!” 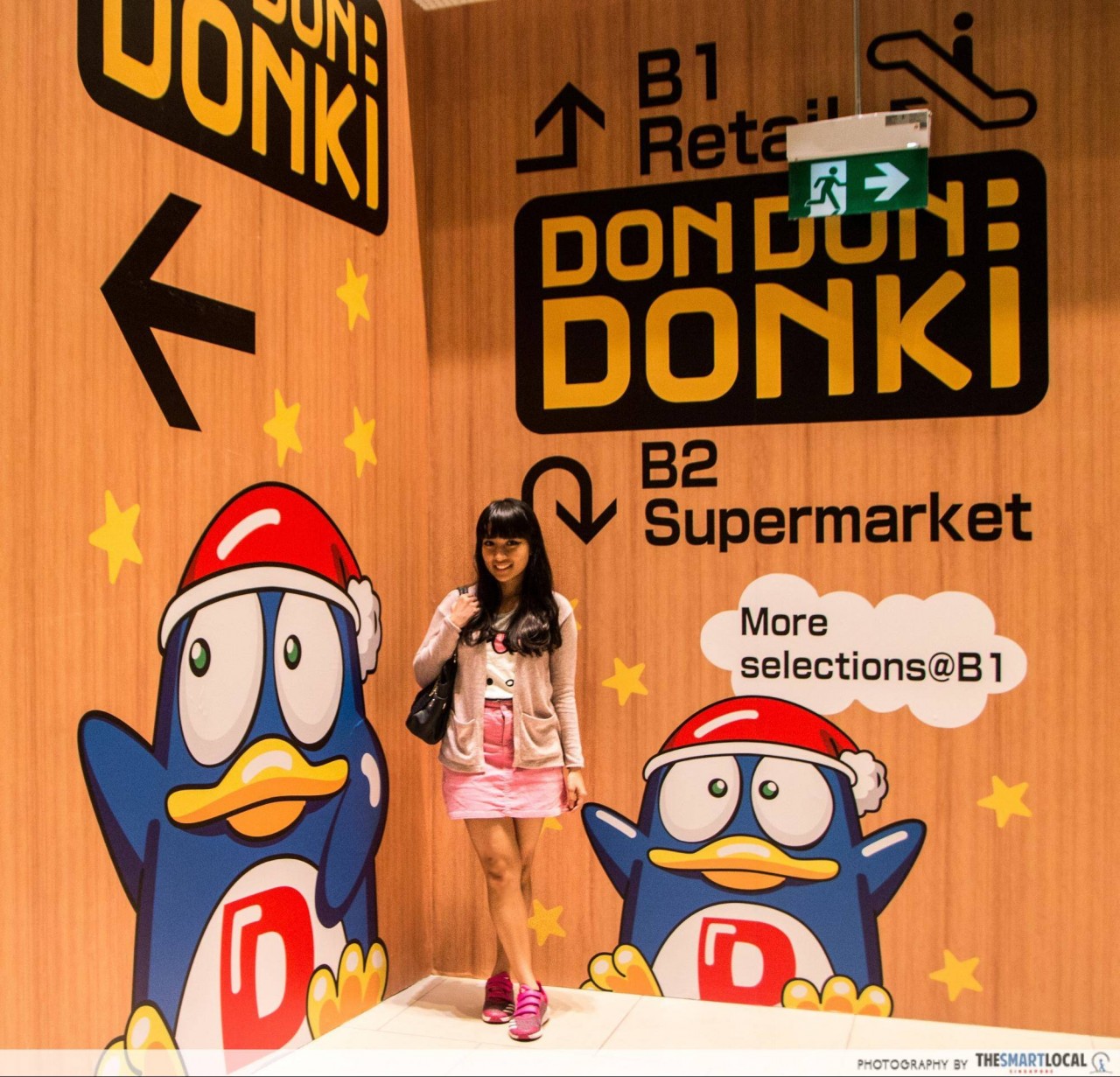