Childhood games in the 90s were very different from the games that kids play these days. Back then, smartphones were practically non-existent and the only time we would play video games was when we were at home upgrading our avatars on MapleStory.

We also had trading card games like Duel Masters, Yu-Gi-Oh or Pokemon, which were often confiscated by discipline masters. So, left with nothing but our imaginations to run wild with, we played these 10 childhood games with just our bare hands.

Chopsticks is a physically mellow game. It will test your mind, requiring not only good arithmetic skills but foresight as well.

Some common strategies involve waiting for the number to build up on the opposing player’s hand before adding your number to theirs, essentially wiping them out.

Reward: People coming to you to ask for help with their maths homework.

Heart attack lives up to its name when the words “heart att..” is enough to send your heart racing a million miles an hour, ready to pull that hand out as fast as you can. Position is key when it comes to the literal “totem pole of hands”.

P.S. It’s also a good game to play so you can low key “hold hands” with your crush without letting her know about your feelings.

Requirements: A whole bunch of friends and their hands.

Reward: Ice pack to soothe the pain from getting hit.

Oyapeysom checks all the boxes when it comes to being a Singaporean childhood game. Used to make decisions, It’s fairly efficient and has “roti prata” and “char kway teow” somewhere in its name.

It’s often used ubiquitously during every PE class to help decide who’s on the red or blue team. But secret coalitions are often formed by friends to make sure they end up playing on the same side.

Requirements: Good wrist stability for all the hand flipping.
Rewards: Finding out who your true friends are.

Ah yes, thumb fights. Challenging for both the mind and the hand, thumb fighting is a quintessential part of hand games and one that all kids have taken part in.

When the legendary words of: “Pepsi Cola 1, 2, 3” are echoed, every child knows it’s time to throw down and prove who has what it takes to win the thumb war.

5. Finger Splitting Game – Feel the fury of the finger

Finger splitting game is a systematic test of the strength and grip power of your entire hand. Usually dominated by the marathon essay writers in school, this game has seen its fair share of finger aches and helped usher in a new age of geriatric Gen Zs like myself.

The consensus to winning this game is to hold as tight as possible. Some employ lesser-known tips like placing their swipes precisely on the tips of the opposing player’s fingers which can help break through even the tightest of kiaps.

Mental telepathy is a legit thing. Just like how you know your buddy is in the mood to commit some form of mischief with a single look, the hand counting game requires targeted guesswork and some mutant-like mind reading powers to win.

This game is usually played at a slower pace. But a more interesting twist is rapid fire mode, where random numbers are blurted to give players less time to think and rely on instinct instead.

Requirements: Telepathic powers like Professor X.
Rewards: People might either be in awe of your powers or find it a little weird.

A true test of hand speed and reaction time, this game often involves staredowns and lots of feints to scare the opposing player in true high noon fashion. While chaps and cowboy hats aren’t necessary, the quickdraw skills of a cowboy are crucial for this game.

A nice tip to keep in mind is to stay as relaxed as possible when playing this game. Any tension might lead to slower reactions and getting defeated by your mortal enemy, so saddle up, chill out, and get ready to flip some hands.

Requirements: Nerves of steel and saying “pew pew” when you flip your hand over.
Rewards: A nice red handprint on the back of your hand.

8. Concentration – Are you thinking what I’m thinking?

Aside from friendship bracelets and secret clubs with weird names, Concentration was one of the benchmarks for evaluating connections between people. Nothing says friendship like being able to vibe and coordinate your movements with the other player.

The game can be adjusted for higher speeds and intensity to really put the strength of the bond to the test. You can then decide if this is someone you wanna share your prized collection of flag erasers with or someone whom you only want to “friend” on occasion.

Requirements: It’s all about the vibes.
Rewards: Might get you a seat at the cool kid’s table.

A classic hand game with a twist or rather a stretch. Scissors, Paper, Stone Split has seen many ripped trousers and overstretched legs over the years. What makes it a mainstay of hand games is the fact that people are willing to push their limits and see how far they can really take this game.

Zha was the ultimate childhood hand game. If the currency in your school was Milo, it was used to determine who reigned supreme and claimed dominion over the last Milo packet. In the arena of hand games, this one requires players to draw elements from all the previous games like focus, mental agility, and reflexes to gain an edge over the competition.

Switching hand positions in a Naruto-esque fashion, players are required to make split second decisions while reading their opponent’s next move in order to deliver a decisive combination to end the game. This makes Zha the most demanding and indeed the most glorious of childhood hand games ever played.

Requirements: A worthy opponent.
Reward: Whatever you wanted, you’re the boss.

Many years have passed since hand games had their heyday. Yet, they remain a vital part of our lives as integral aspects of our childhood identity.

And while technology has largely rendered hand games obsolete, there will always be a special place for them in our hearts – especially when we relive childhood memories and bonds over a shared love for games that we played with our hands.

For more nostalgic games to play with your friends and family: KTM Shuttle Guide In 2022: SG To JB In Just 5 Minutes If You Want To Siam The Causeway Jam
9 Places In SG That Look Straight Outta Stranger Things, Minus Vecna Coming After Your... 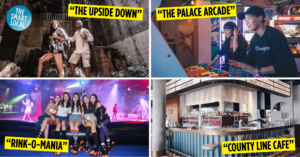