When it comes to traditional Vietnamese women’s clothing, most people instantly think of ao dai – and rightfully so. The attire has become all but synonymous with the elegant beauty of Vietnamese women.

But let’s not forget that Vietnamese people comprise 54 different ethnicities, and ao dai is representative of just one – the Kinh people. The other 53, while having significantly smaller populations – also have their own cultures, languages, and yes, clothing that contribute to the diversity of Vietnam.

So, let’s take a look at 8 beautiful ethnic Vietnamese women’s clothing that deserve no less recognition. 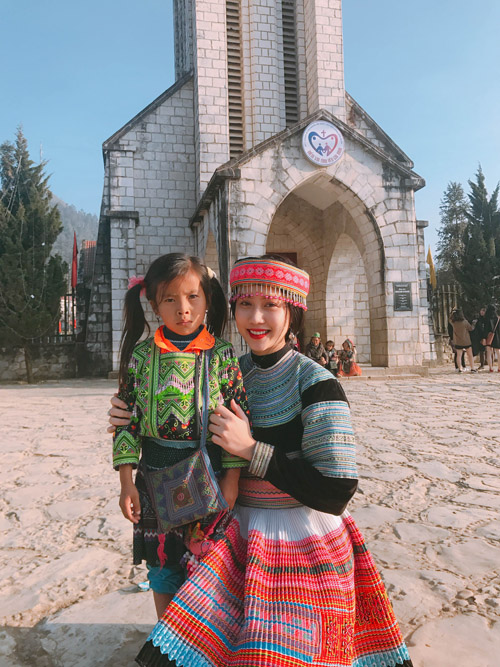 Their traditional women’s attire is characterized by its vibrant colors – mainly red. The highlight is a multilayered skirt that goes past the knees. On the other hand, while the shirt is mostly in plain black or red, it is often covered by an apron-like piece of cloth and adorned by a belt, both of which bear colorful patterns. 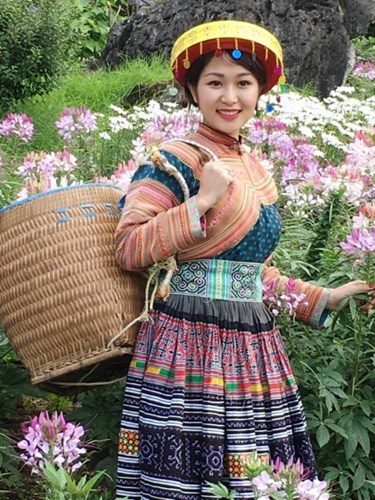 Another important part of H’mông traditional women’s attire is the headscarf. In many cases, it comes with many tassels hanging down the wearer’s forehead. H’mông women also like to wear prominent accessories such as big earrings and necklaces. 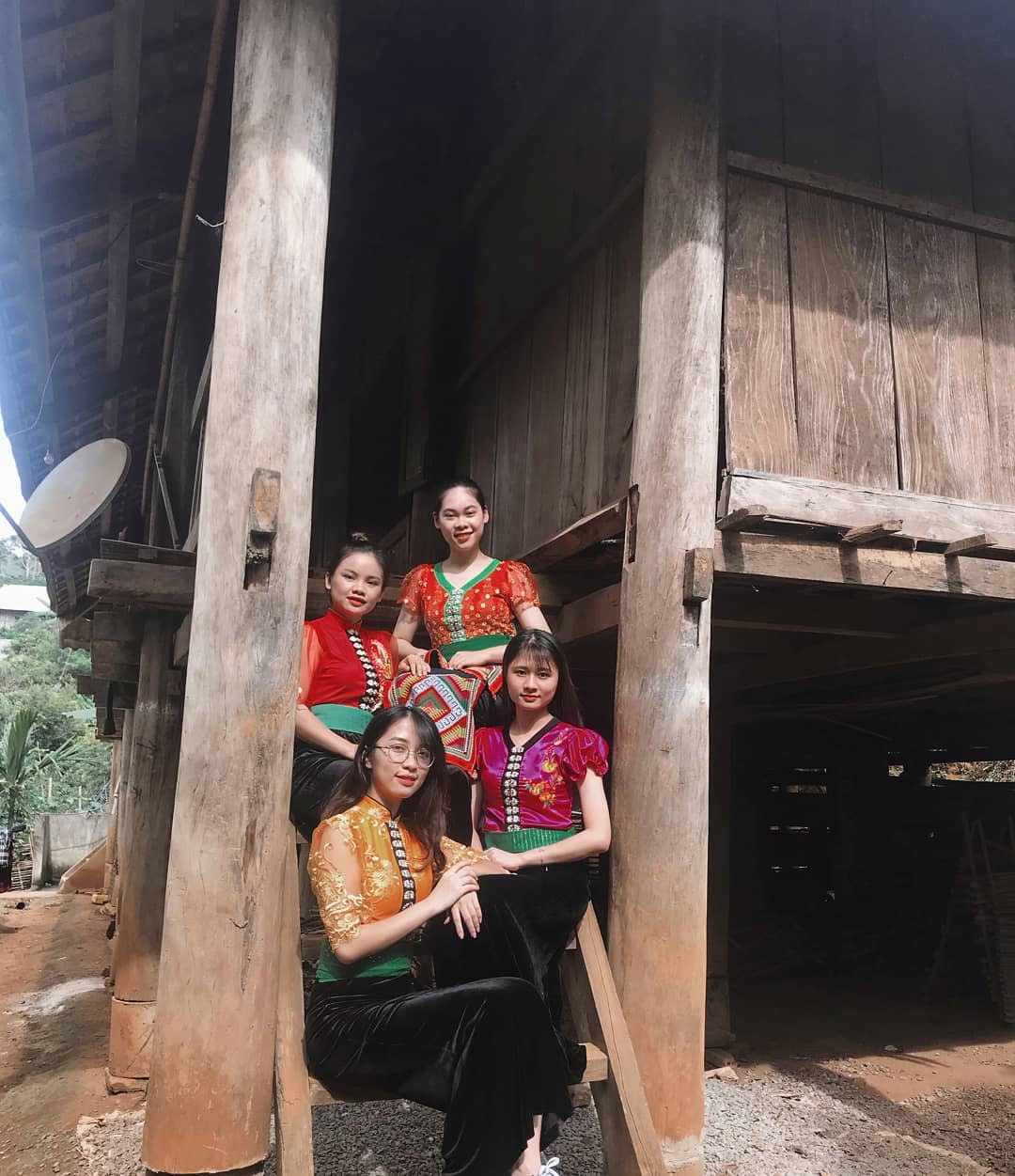 In contrast to the fabulous style of H’mông women, women of the Thái ethnicity – who reside in some northwestern provinces of Vietnam – prefer simpler clothing that puts a strong emphasis on elegance. Their traditional women’s attire features a simple button-down short shirt and a tight-fit black skirt that goes all the way to the ankle. 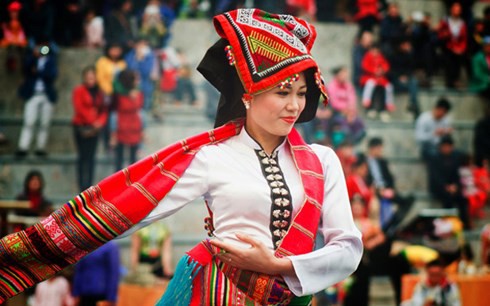 But the most defining element of Thái women’s attire is “Piêu” – a long scarf with vibrant square patterns on both ends. The scarf is folded and worn on the head, with the patterns covering the entire scalp. 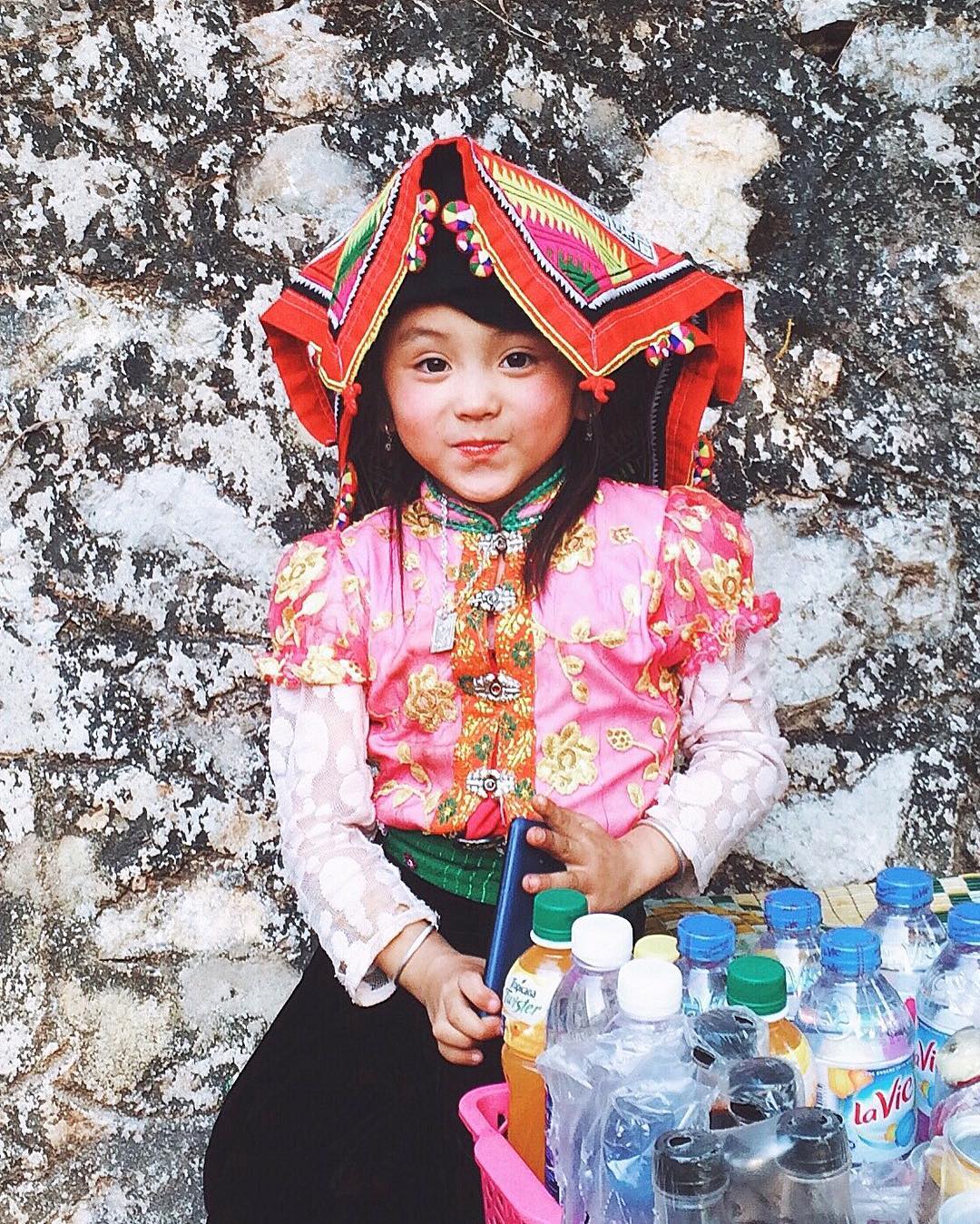 Traditionally, Thái women have been taught to embroider piêu at a young age. Sometimes, the ability to create a beautiful piêu can be used as a standard to judge how desirable a young woman is as a bride. 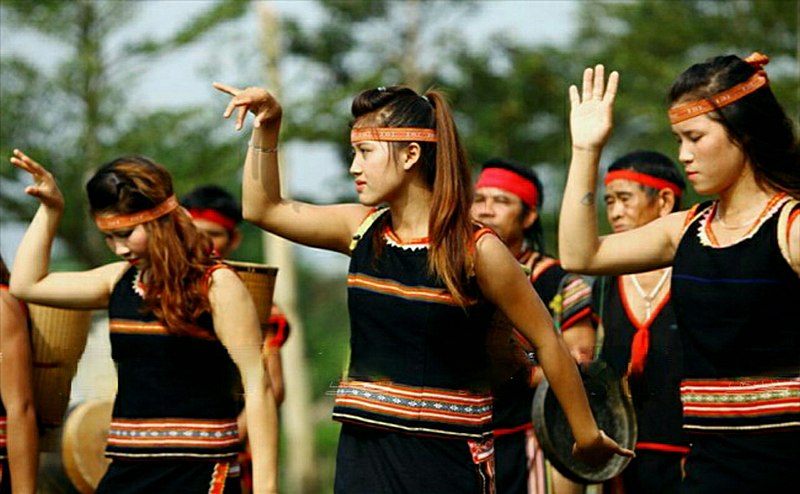 The Ba Na people live mainly in southwestern provinces such as Gia Lai, Kon Tum, or Phú Yên. As such, the way they dress differs greatly from those in the north.

Their clothing, for both men and women, uses black as the main color, with strips of colorful patterns as highlights. These often come in red – representing life and vigor, and yellow – signifying harmony with nature. For women, the skirt is often not sewn or cut. Rather, it’s an entire sheet of cloth to be worn around the waist. 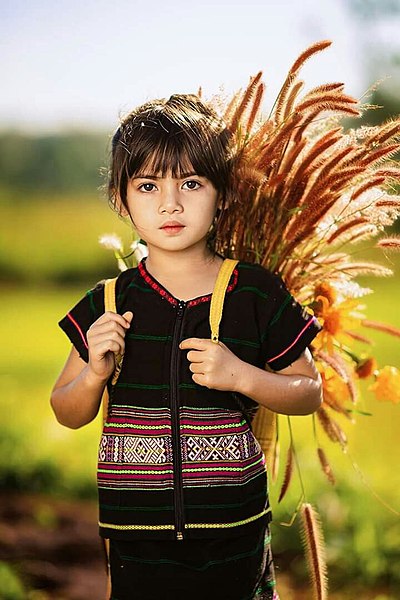 The patterns themselves highly focus on symmetric shapes. They are meant to represent opposing elements in nature such as the sun and moon, and the earth and sky. 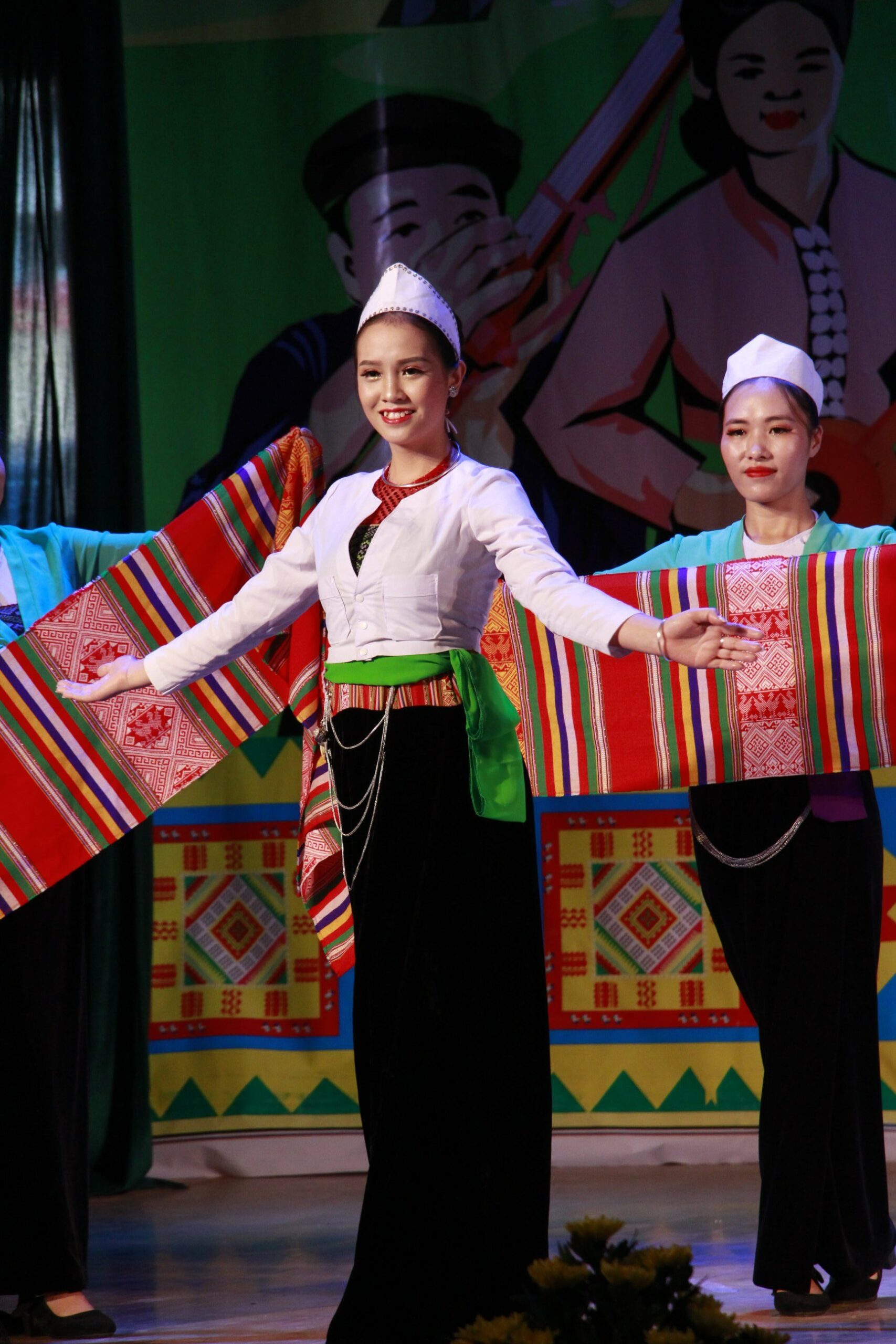 At first glance, traditional women’s attire of the Mường ethnic community looks similar to their Thái neighbors, with an ankle-length skirt and a button-down blouse. However, while Thái people wear plain skirts, Mường women embroider theirs with colorful patterns around the waist. The blouses, which are simple in color, are also often worn over colorful shirts underneath.

As for headgear, in place of the extravagant piêu, Mường women opt for a modest white headband to hold their hair. In their culture, white is the color of purity, and so it is worn on the head – the most important part of the human body – as a sign of reverence. 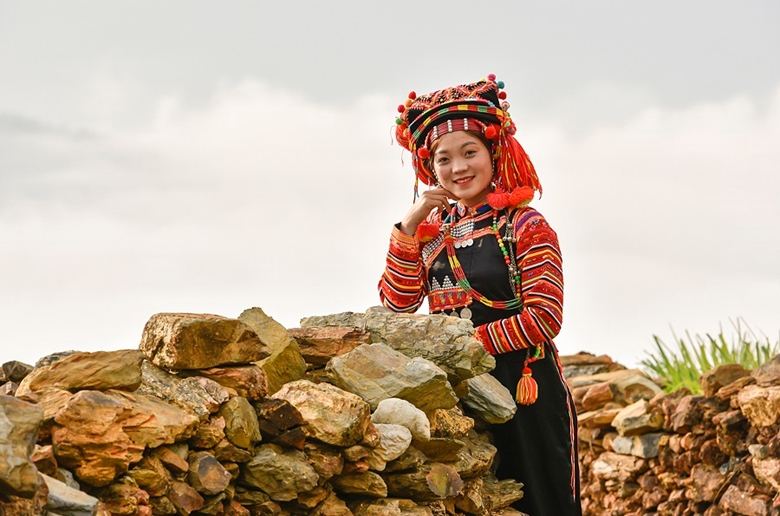 Living close to the border with China, the Hà Nhì ethnicity comprises two main branches: the Hà Nhì Đen people and the Hà Nhì Hoa people. Each has their own distinct clothing style, especially for women.

Both Hà Nhì Đen and Hà Nhì Hoa women traditionally wear black shirts – either waist-length or going all the way past their knees – over trousers, with embroidered patterns adorning the sleeves and the torso. However, their choices of pattern colors differ greatly. Hà Nhì Đen people like to use more subdued tones such as blue or purple, whereas Hà Nhì Hoa people opt for much brighter shades such as red or yellow. 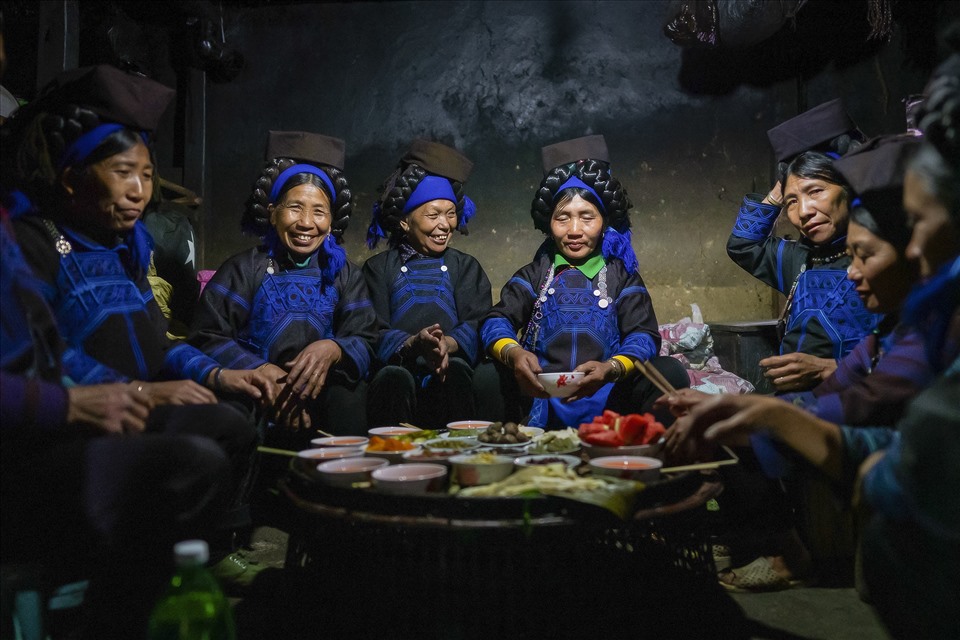 And as with many other communities’ ethnic attire, the headgear is indispensable. Hà Nhì Hoa women are rarely seen without their intricately woven hats with many tassels. By contrast, Hà Nhì Đen women’s headgear is much more unassuming, featuring only a folded piece of cloth. However, it is often worn over a wig that’s a thick braid woven from wool. 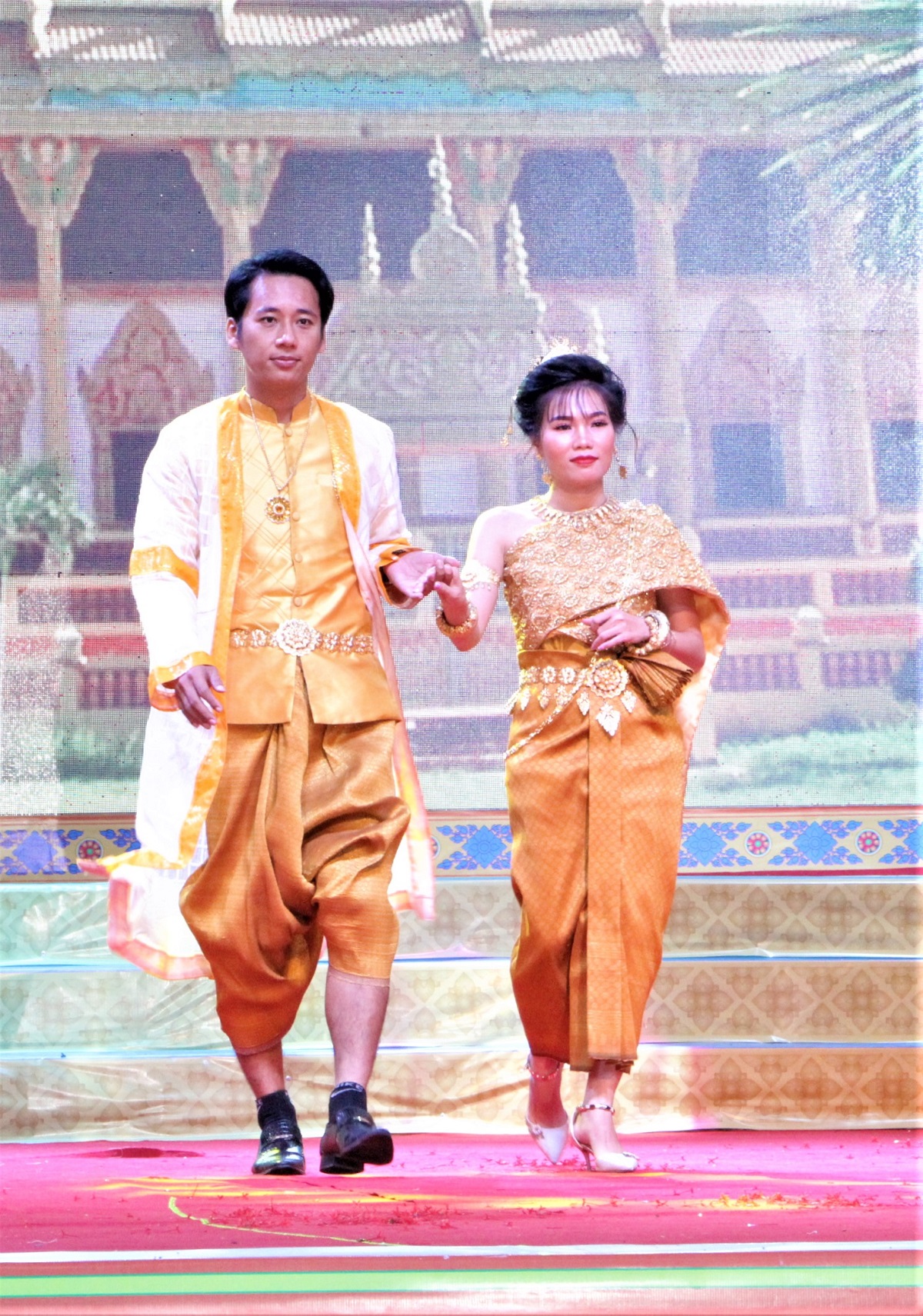 With a population of over a million, living mainly in southern provinces such as Trà Vinh and Sóc Trăng, the Khmer people have long been one of Vietnam’s many ethnic groups. However, they are an ancient people that has a presence in several Southeast Asian countries. As such, Vietnamese Khmer people maintain a distinct culture, and by extension, clothing that wouldn’t be out of place in a Cambodian festival. 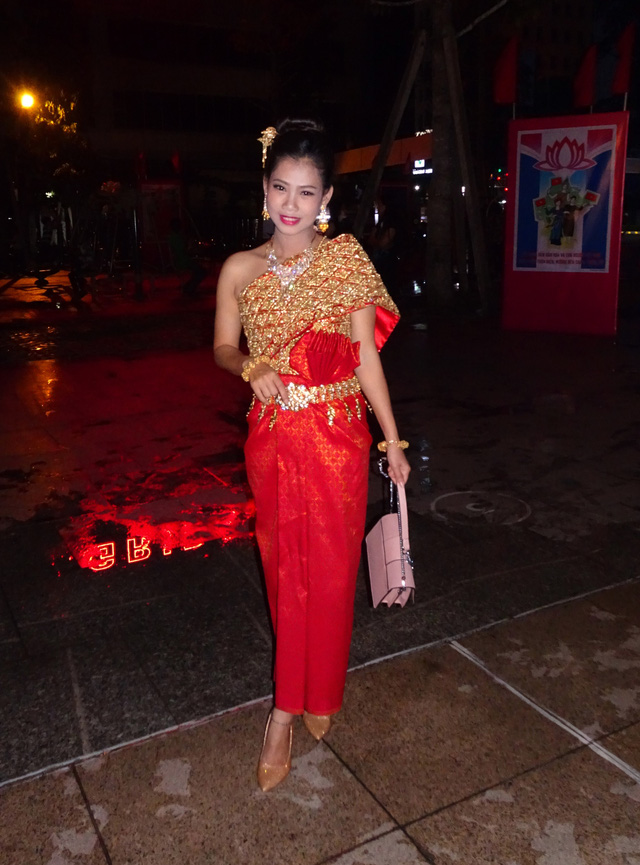 Yellow is a prominent color in Khmer women’s attire. For casual everyday businesses, they often wear shirts accompanied by a xăm pốt. Technically, a xăm pốt is a dress made from one whole sheet of cloth, but it can be wrapped around the legs and tied at the waist to resemble baggy pants. If extra formality is needed, Khmer women add in a sbay – a silk scarf worn from the left shoulder to the right hip. 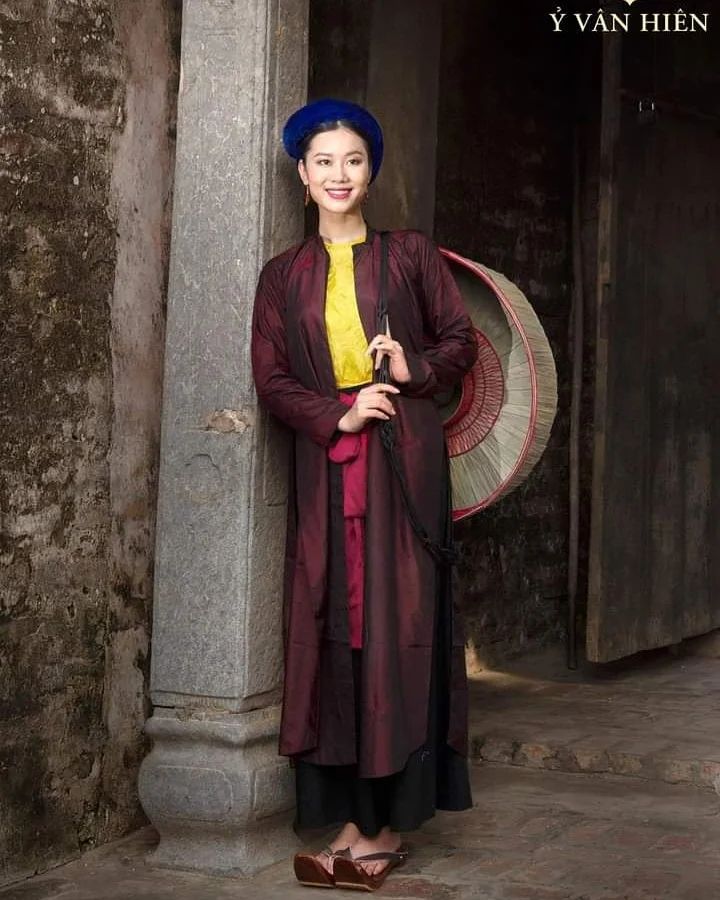 People of the Kinh ethnicity make up the vast majority of the Vietnamese population, and of course, their traditional áo dài is all but too well-known. That said, áo tứ thân is another type of traditional Kinh women’s clothing that deserves a shout-out. Centuries before áo dài came along, áo tứ thân was already favored by common folks in northern Vietnamese provinces.

It comprises a long shirt divided into two flaps at the front and another two at the back. It is this characteristic that gives the attire the name tứ thân – meaning “four body parts”. The shirt is worn over wide-leg pants and a type of apron-like bodice called yếm, and then tied with a colorful belt. Usually, it is also accompanied by a round, flat hat called nón quai thao. 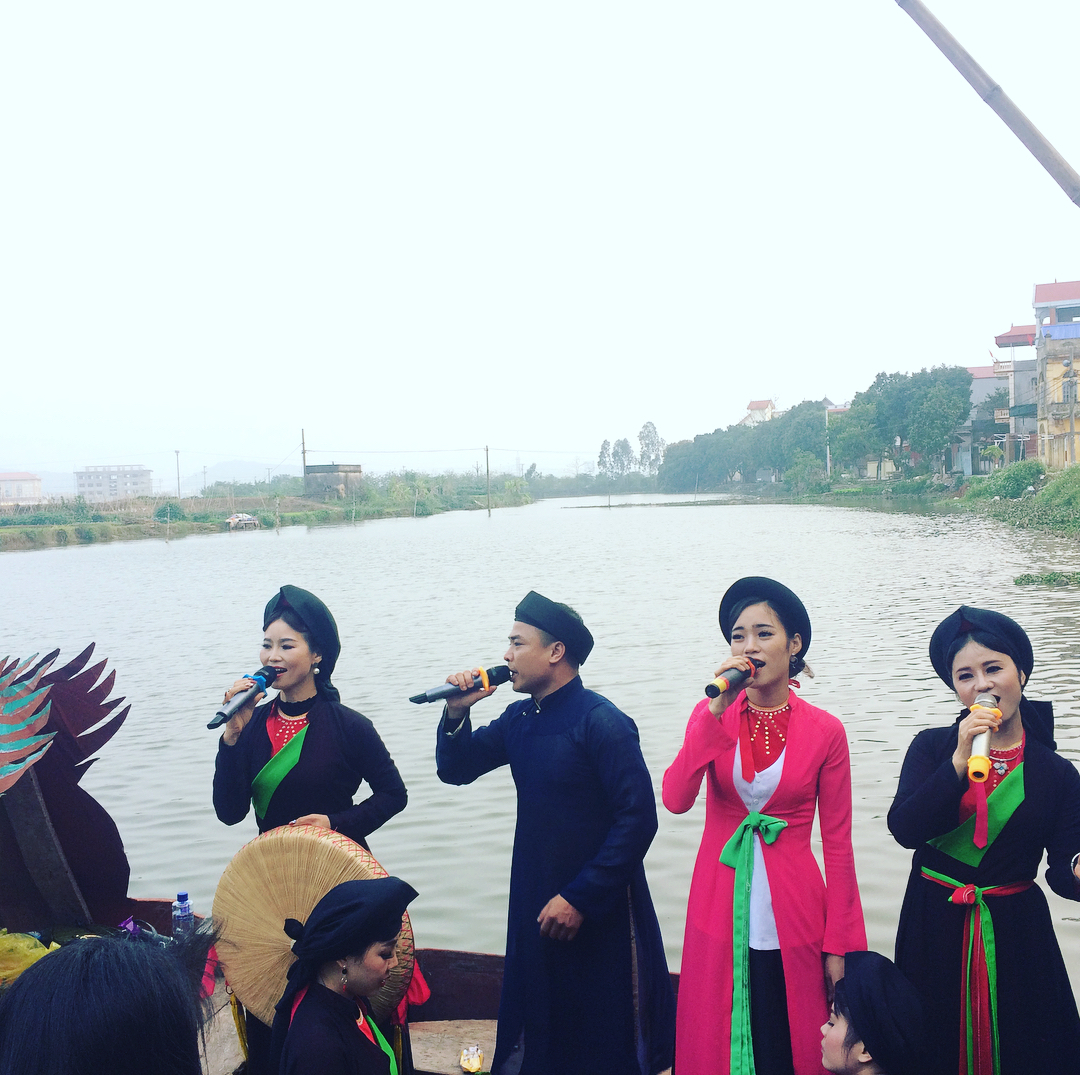 Today, áo tứ thân is only seen in performances and festivals. It is often associated with Bắc Ninh Province’s signature quan họ singing – a form of traditional folk singing where men and women exchange verses as if in a conversation. 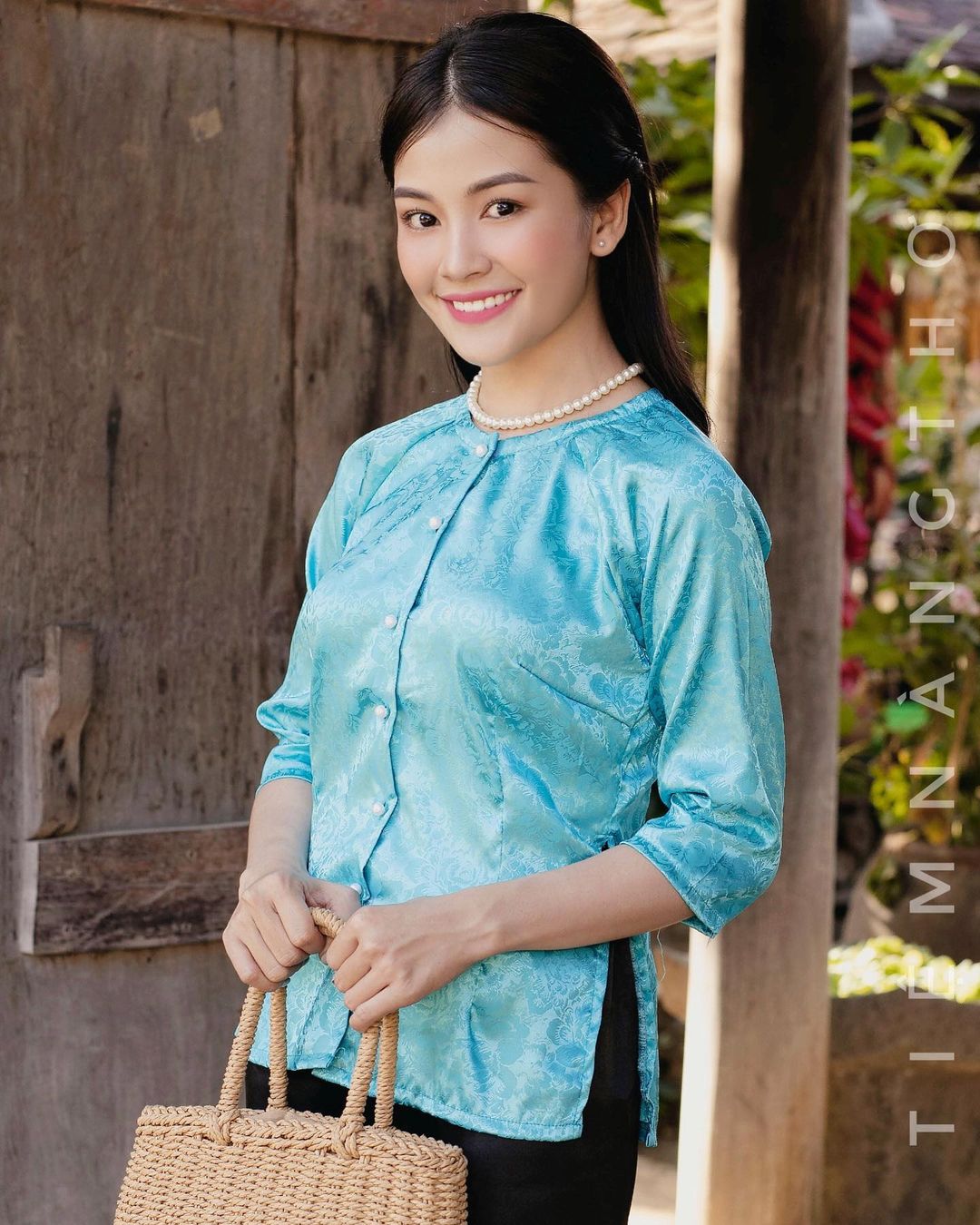 While northern Kinh women have áo tứ thân, those from the south instead are known for another signature attire called áo bà ba. 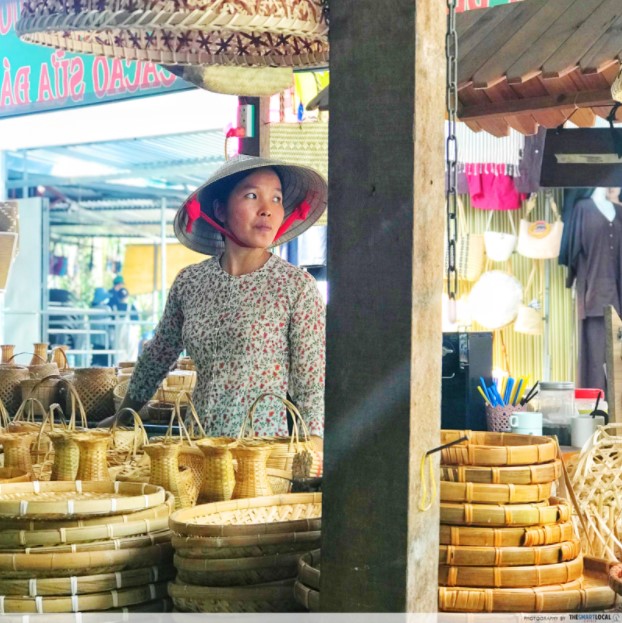 In contrast to the likes of áo dài, which emphasizes elegance and sophistication, áo bà ba is synonymous with rustic country life. The attire includes a silk long-sleeved button-down shirt and trousers. Usually, the shirt is split at the hips and has two pockets at the front. The design is aimed to be practical and comfortable. It allows for greater freedom of movement, which women in the past needed to go about their daily work. 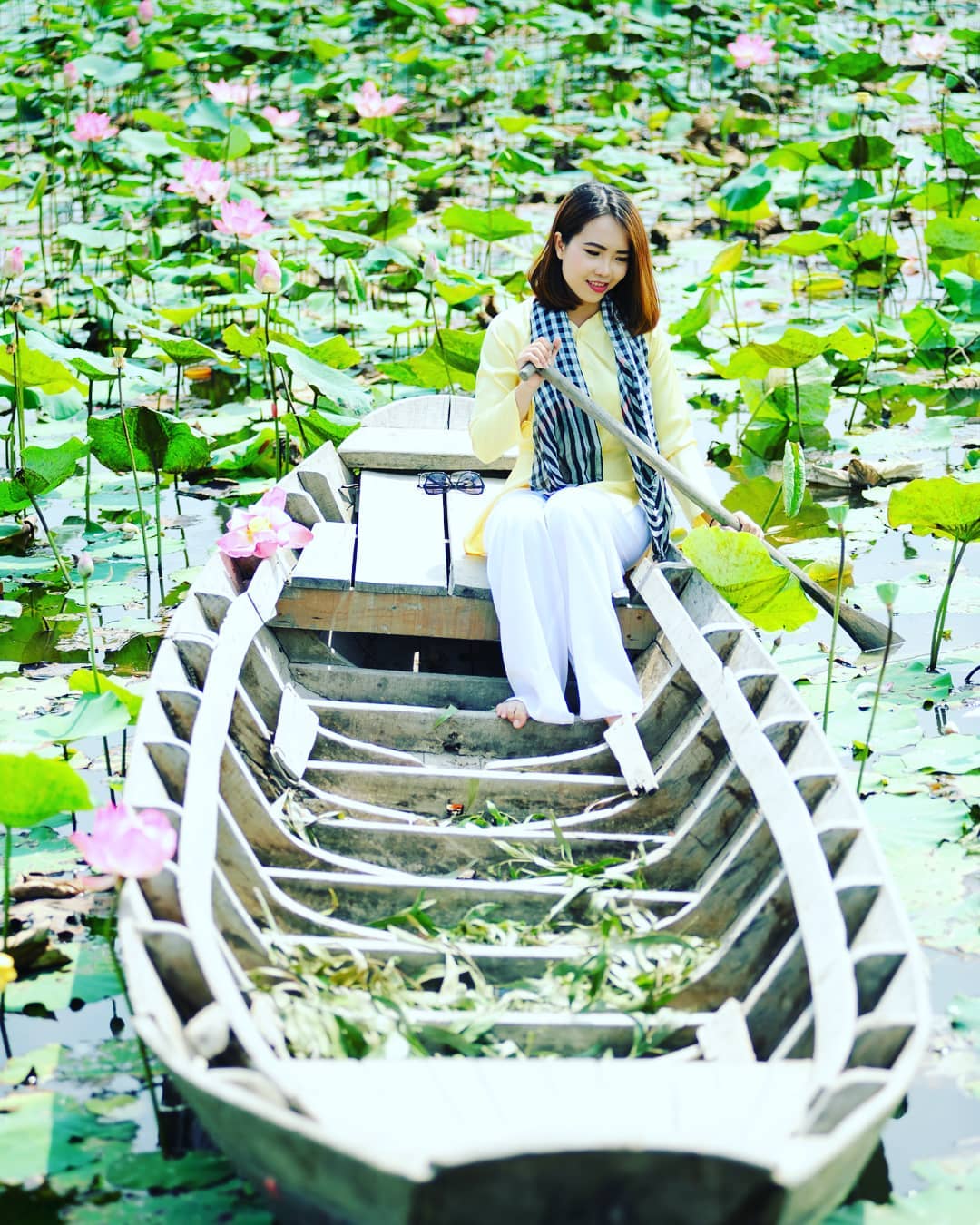 Today, áo bà ba isn’t as popular as it once was, but it is still romanticized in many songs and literary works. The garments are associated with the gentle, endearing beauty of a young country girl.

The áo dài has made an appearance on many international stages and established itself as the signature attire of Vietnamese women. But aside from it, other Vietnamese ethnic women’s clothing is no less important. Each reflects generations’ worth of its respective region’s culture and ways of life, passed down from one generation to the next.

These ethnic garments are a significant part of Vietnam’s diverse culture, but unfortunately, many are falling into obscurity, unknown to most modern city folks. So, share this article with your friends, to give these garments the appreciation they deserve. 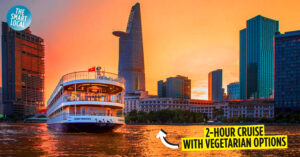 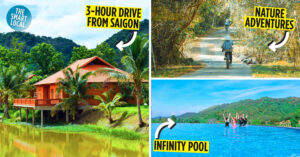