What was dating like in the 1960s? How did the past generations flirt with one another?

For some couples, it was a candlelit dinner in an intimate restaurant booth or a picnic with a basket of food and flowers. For those who couldn’t afford it, leaving a love letter at the doorstep or sneaking up on a lover’s balcony to whisper sweet nothings would simply do the trick.

For Đặng Tuyết Mai, a then-air hostess in her early 20s, it was being chased by a military jet by one of the most powerful men in the country.

She was one of Vietnam’s first air hostesses 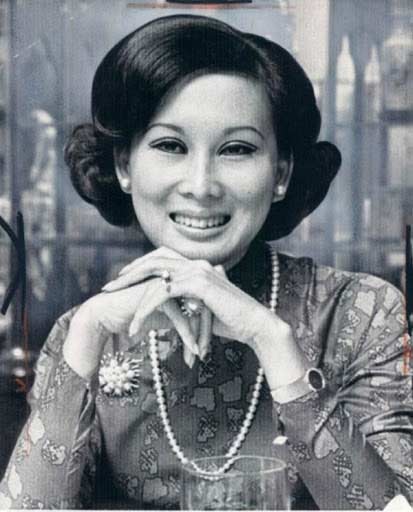 Đặng Tuyết Mai was born in 1941 into a Buddhist family in Bắc Ninh, northern Vietnam, and spent her childhood in Hanoi.

In 1953, her family emigrated to Dalat in then-South Vietnam, where she enjoyed a French education at the Lycée Yersin School. 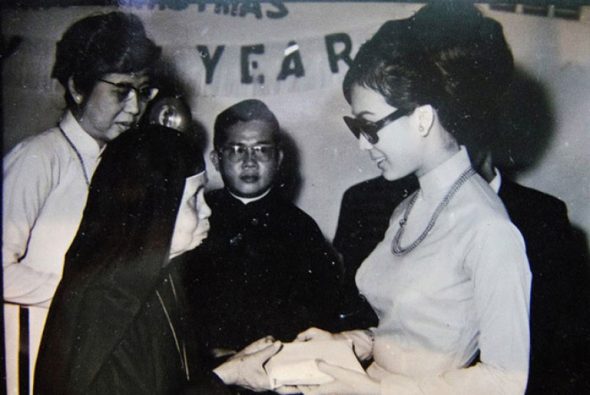 Air Vietnam set very high recruitment standards. Considering the faces of the airline company itself, all of its air hostesses were required to be fluent in both French and English, according to Nhạc Xưa. 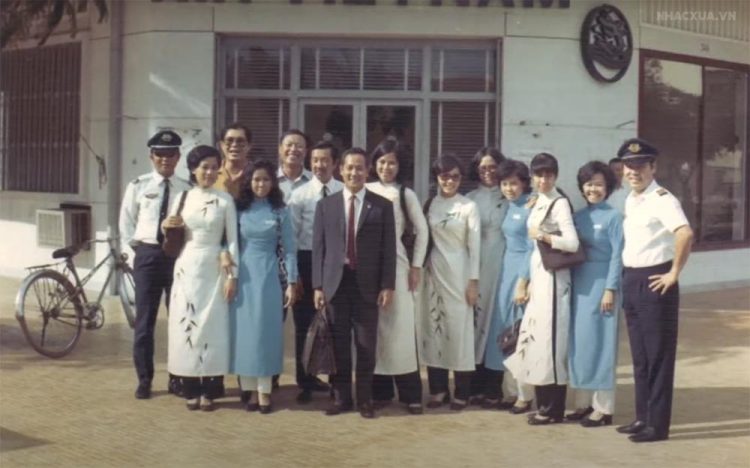 French-educated and a lover of fashion, Đặng Tuyết Mai had great taste in clothing. Aside from áo dài as her work uniform, she was often seen in demure Western-style dresses with trendy accessories that revealed her artistic flair.

Back in the day, working in an airline was seen as a new and desirable job. Because there were not many Vietnamese air hostesses in the early 1960s, Đặng Tuyết Mai soon caught the eyes of many local bigwigs and was highly sought after. 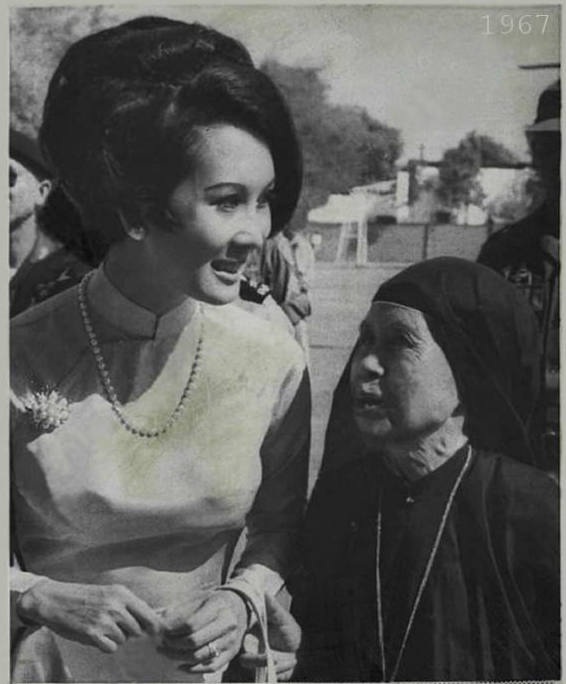 Legend has it that she had received numerous offers to work in the film industry or feature in advertisements, but she turned them all down, given her conservative Confucian upbringing. 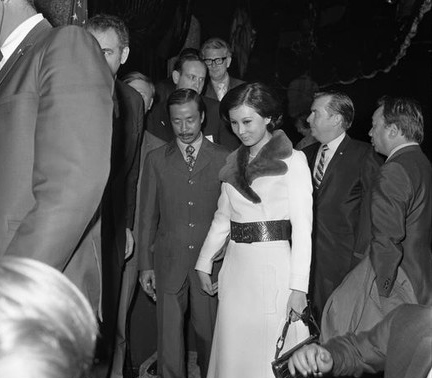 She had many admirers, among whom was Nguyễn Cao Kỳ (1930-2011), a then-military general who was on track to becoming the second-most powerful man in the country. Apart from his political career, General Kỳ was also widely known as the man who chased his crush with a jet.

She was chased by a military jet while working 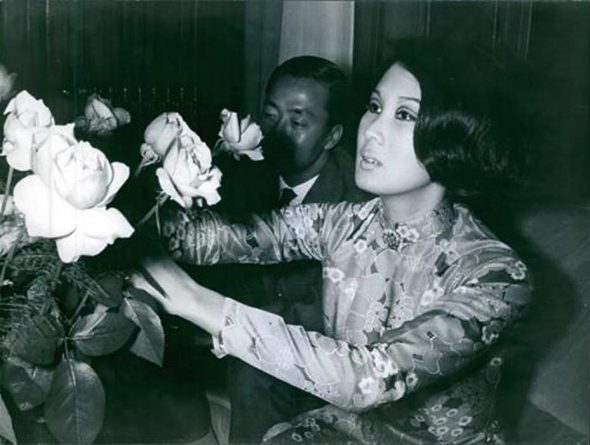 In an interview with Ngụy Vũ from Little Saigon TV, Đặng Tuyết Mai recalled this memorable event, which later became a legendary anecdote.

According to her, General Kỳ and his colleague flew two separate jets chasing after the plane that she was working on.

As she was doing her job, she noticed a commotion among the passengers and saw that many were looking out the windows in an excited manner.

Almost instantly, she received an urgent call from a pilot, “Please look out the windows!”

As she glanced out the windows, she saw two jets flying alongside the plane.

What’s more, those jets were flying in loops and spinning about, performing aerial acrobatics.

Needless to say, the only one who had the power and boldness to do such a thing was no other than General Kỳ – then chief of the then-Republic of Vietnam Air Force. 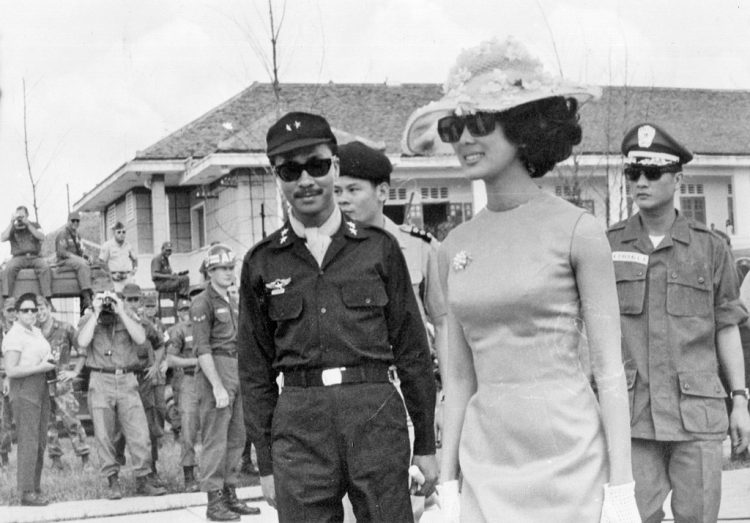 “Please tell General Kỳ to go home,” the pilot whispered to Đặng Tuyết Mai in a worried voice. “This is a violation of airspace law. His flirting method is romantic but too dangerous.”

In response to the pilot’s request, the bewildered air hostess spoke with General Kỳ via an intercom and asked him nicely to stop his aerial courtship.

“I’m in the middle of my shift. Besides, the passengers are scared.” she said. 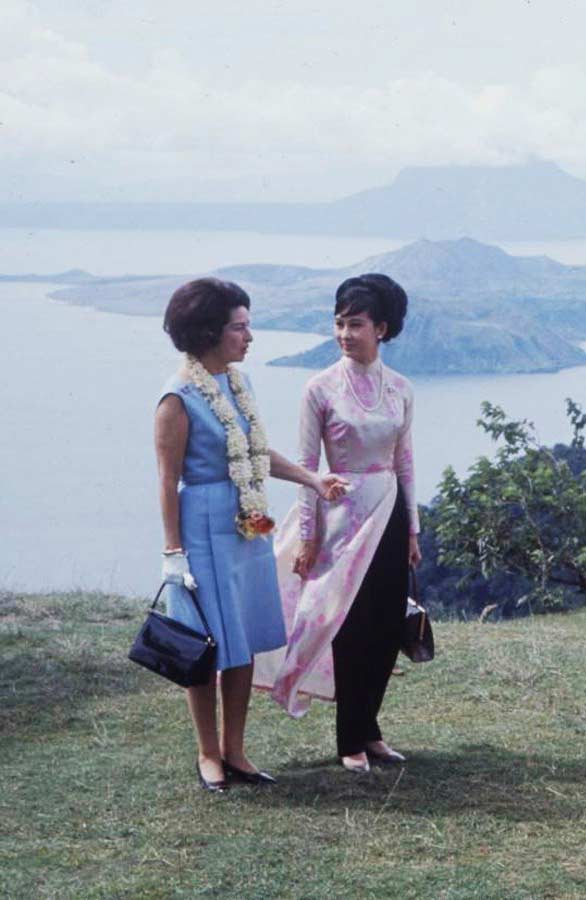 She didn’t forget to thank him for his amazing efforts to impress her.

After that unforgettable event, General Kỳ continue pursuing Đặng Tuyết Mai and their whirlwind romance blossomed into an extravagant wedding in November 1964 at Caravelle Hotel. 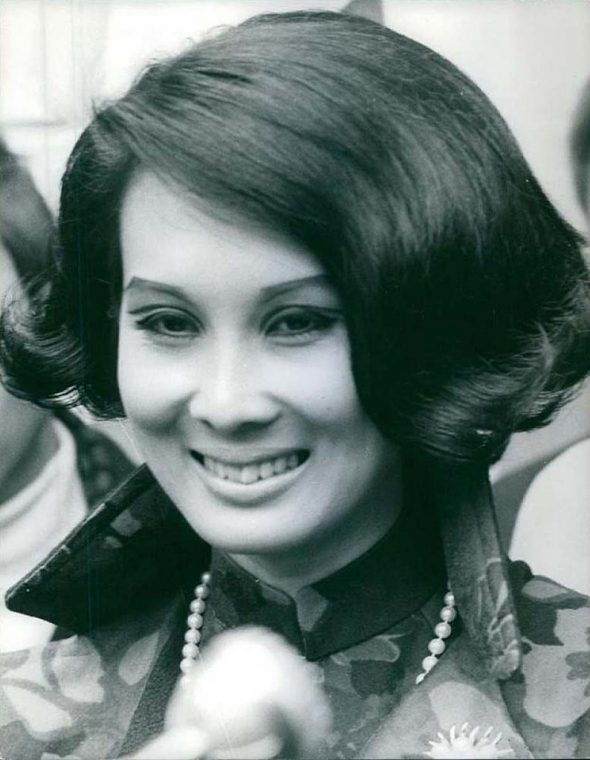 In June 1965, General Kỳ became the Prime Minister and later on Vice President of the then-Republic of Vietnam (then-South Vietnam). As a matter of course, Đặng Tuyết Mai became the Second Lady and was often addressed as Madame Nguyễn Cao Kỳ. 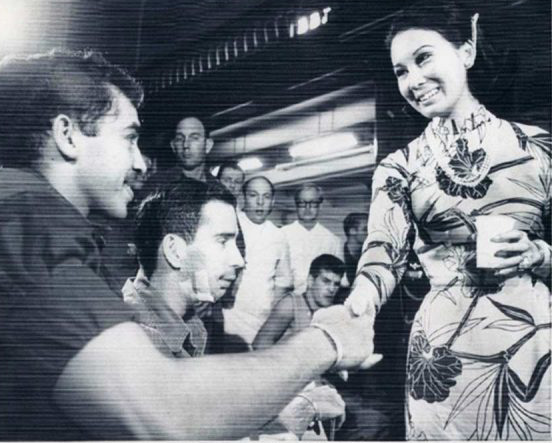 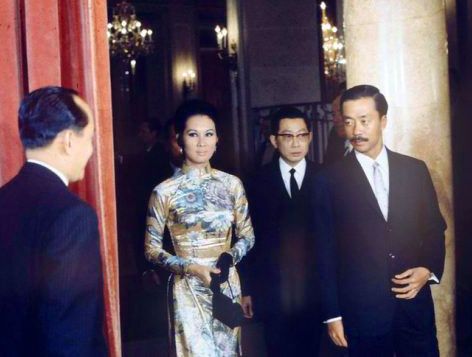 After her husband became a politician, Madame Kỳ started making appearances in many ceremonial events in and outside Vietnam. 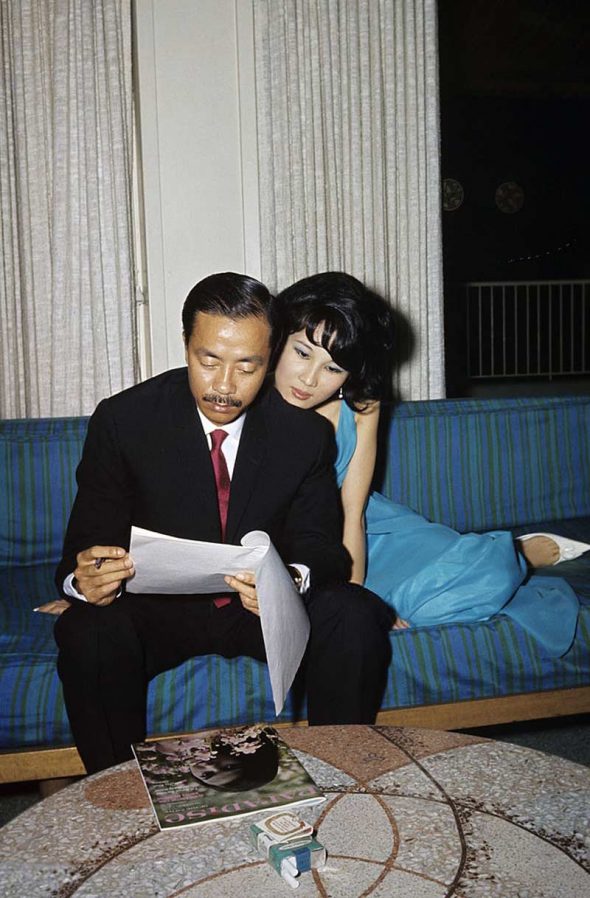 From elegant áo dài that emphasized her slim figure for state dinners to glamorous gowns for inaugural balls to a military jumpsuit for a field trip, she feasted everyone’s eyes with various wardrobe staples.

Madame Kỳ also had a penchant for accessories. 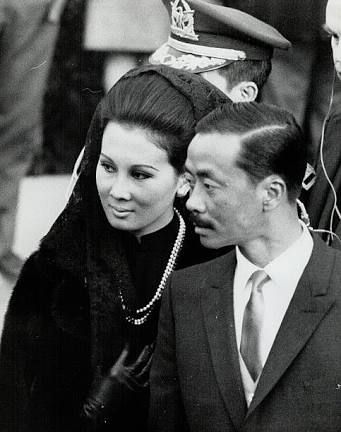 From classy pearls to jaunty fedora hats to snazzy oversized sunglasses, she knew exactly how to complement her graceful and chic look. 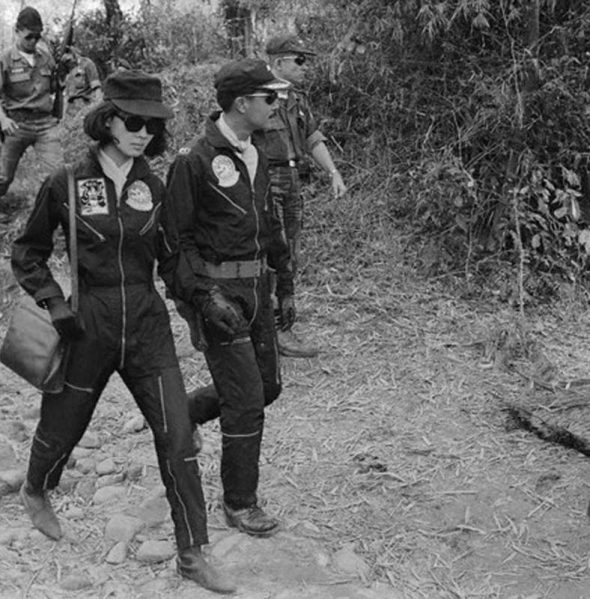 Images of her flooded newspapers, and Madame Kỳ became synonymous with refinement and sophistication.

In April 1975, Madame Kỳ and her family left Saigon to settle in the US. 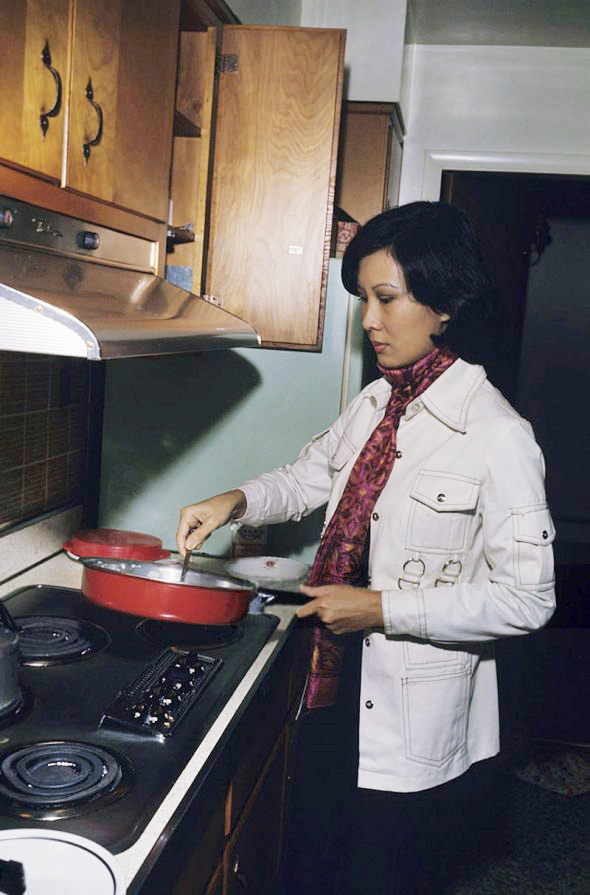 To make a living in a foreign land, Madame Kỳ and her husband opened a liquor store in Norwalk, California, according to the LA Times.

No longer a Second Lady, Madame Kỳ had to drive, cook, and do basically everything by herself. 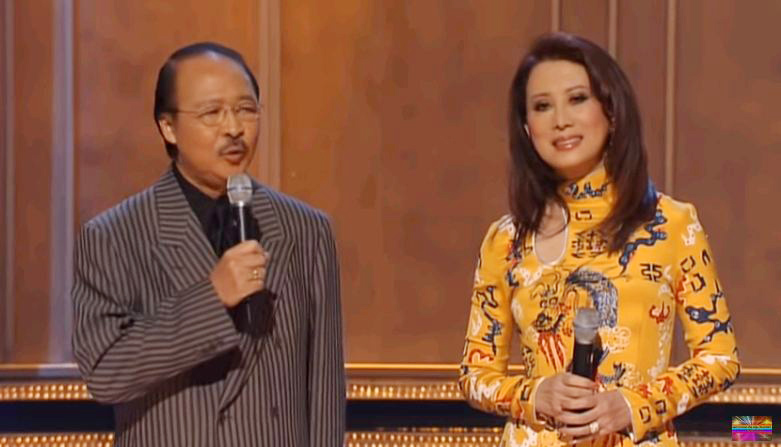 Even so, she adapted quite well. She mingled more with the Vietnamese community, joined recreational activities, and even became an occasional show host for a Vietnamese music show called Asia while in her 60s.

There’s no denying that her beauty and sense of fashion stood the test of time. 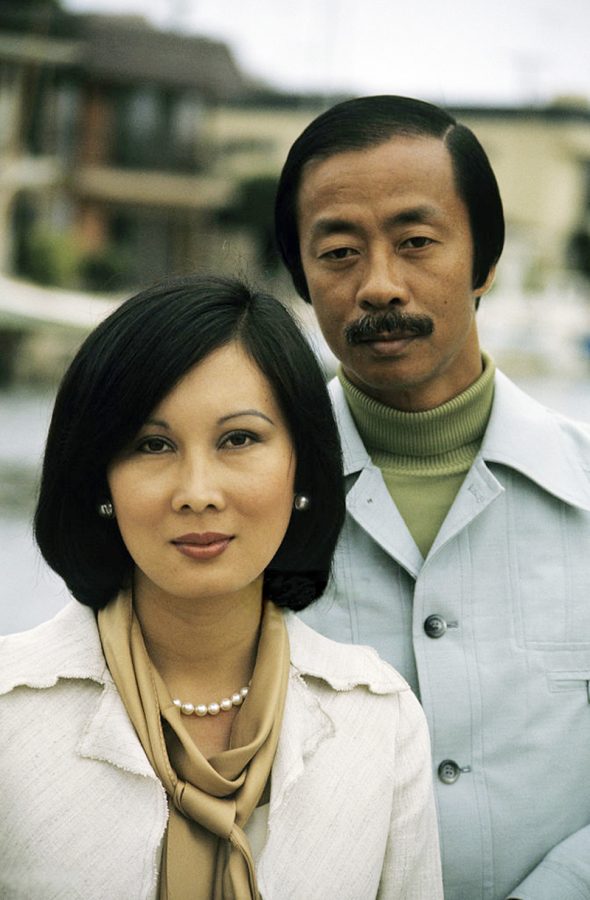 In 1989, she divorced General Kỳ and remarried a few years later.

In her 70s, she still astounded everyone with her youthful looks and graceful manners befitting a former Second Lady.

On 21st December 2016, she passed away in Hoag Hospital in Newport Beach, California.

She had one daughter with General Kỳ – Nguyễn Cao Kỳ Duyên. Her daughter is a famous public figure in the overseas Vietnamese community and best known as the regular host of Paris By Night.

The embodiment of grace and fashion

In many people’s eyes, Madame Kỳ was the perfect embodiment of what a First Lady should be: well-mannered, beautifully dressed, and relatable. On top of that, she was also known to be very humble and private about her personal life.

There are many First Ladies as well as Second Ladies in Vietnam’s modern history, but Đặng Tuyết Mai, or Madame Kỳ, was probably the most popular and influential political wife.

The love story between her and General Kỳ, though without a happy ending, still goes down in history as one of the most romantic local anecdotes. Thanks to her, we know that many of the movers and shakers in Vietnamese history could be quite romantic, as it turns out. 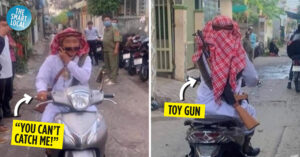 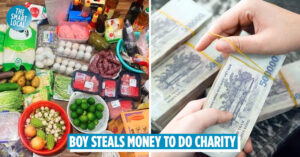