Vietnam is known as a peaceful and friendly country, but of course, no country is without crimes, and every now and then, we get news of particularly serious cases that give us goosebumps.

So, let’s take a look at 9 of the most famous crimes in Vietnam in the past decade, from jealousy-induced murders to those caused by pure fanaticism.

1. Nguyễn Đức Nghĩa – murdered his ex-girlfriend and dismembered her body 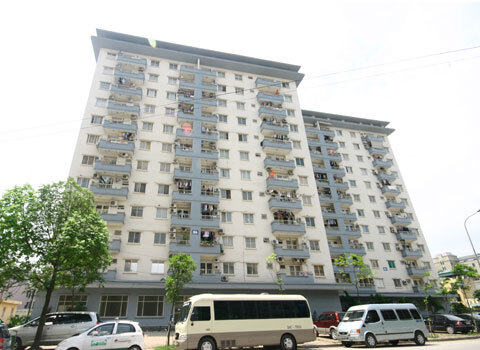 The apartment where the murder happened

On the morning of 17th May 2010, security guards at an apartment in Hanoi were horrified to find the mangled, naked body of a young woman on the rooftop. Authorities were immediately notified, and further investigations revealed the murderer to be Nguyễn Đức Nghĩa, the victim’s ex-boyfriend. 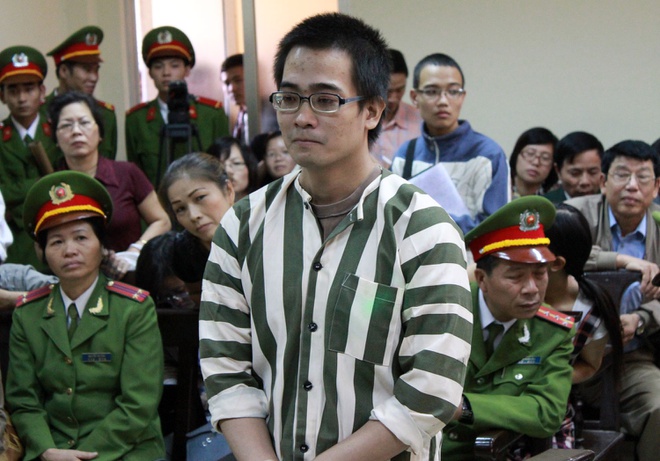 From what Nghĩa said during interrogations, he and the woman were still seeing one another at the time of the murder even though they had broken up years before. But that fateful day, blinded by jealousy after hearing his lover’s phone call with her new boyfriend, Nghĩa stabbed her multiple times to death.

The man then proceeded to cut off her head and fingertips to make the body harder to identify, then took a bus to the nearby Quảng Ninh Province, carrying the victim’s body parts with him in his bag, which he later disposed of in a river. 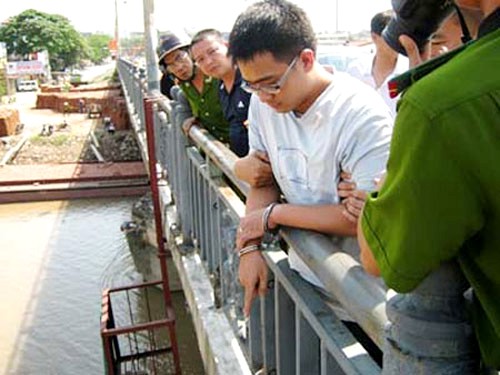 Nghĩa pointing towards where he disposed of the victim’s body parts
Image credit: tienphong.vn

Several reports about the gruesome murder claimed that Nghĩa showed great remorse during his time in prison and begged for the death sentence on multiple occasions, which he was given in July 2014. The case is now closed, but the horrific memories it left behind still haunt residents of the apartment where the body was found. 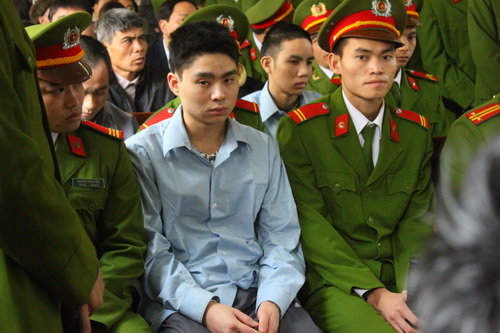 Lê Văn Luyện is probably one of the most infamous killers of Vietnam in recent history. In the early hours of 24th August 2011, at only 17 years old, Luyện brutally butchered the entire family of a jewelry shop owner in the northern province of Bắc Giang during a burglary-turned-robbery attempt.

In his wake, Luyện left behind 3 dead bodies, including the shop owner, his wife, and his 18-month-old daughter. The owner’s eldest daughter – then 8 years old – was the sole survivor, though her right hand was severed during the struggle. 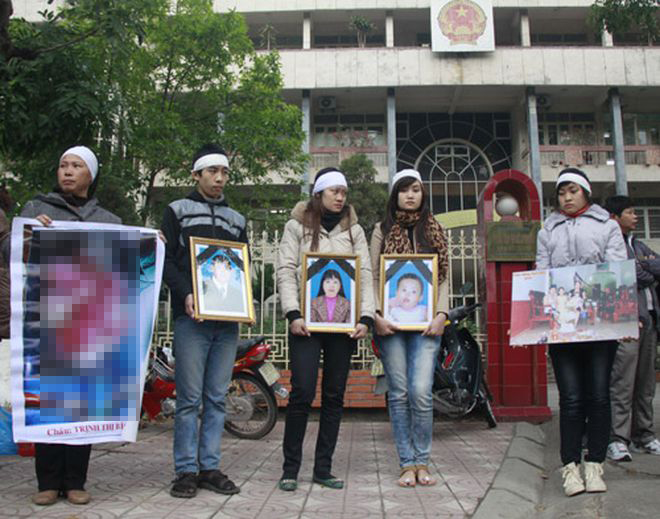 Luyện’s display of ruthlessness – not even sparing a toddler – sparked massive public outrage, with many people demanding his execution. However, as he was still a juvenile at the time, the court deemed it just to give him an 18-year jail sentence instead. 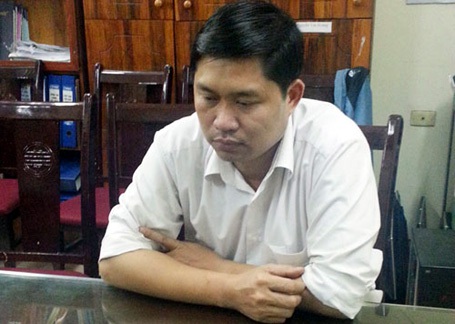 Striving to become more beautiful is a common desire, and many are not afraid to go to great lengths, resorting to cosmetic surgeries to achieve their goals. Such procedures, however, should only be undertaken after careful planning and consideration, or the results could be disastrous – or possibly fatal, as was the case at the Cát Tường Surgery Center in Hanoi in 2013.

On 19th October 2013, Lê Thị Thanh Huyền, 39 years old at the time, came to Cát Tường Surgery Center for a breast augmentation surgery. There, Dr. Nguyễn Mạnh Tường extracted fat from her belly to inject into her breasts. However, only hours after the procedure, the patient experienced seizures and died soon after. 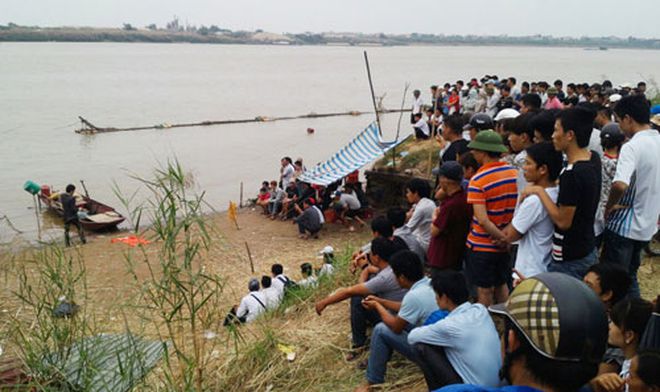 Efforts were done to retrieve the victim’s body, but it was only found months later
Image credit: Thanh Niên

In a desperate attempt to cover up the accident, Tường hid the victim’s body in his car and, later that night, threw it into the Red River. While the immoral doctor was arrested only after a couple of days and eventually sentenced to 19 years in prison, the unfortunate victim’s body was only found 9 months after the incident in a headless, limbless state.

To this day, the name Cát Tường is still used to remind people of the danger of shady beauty salons. 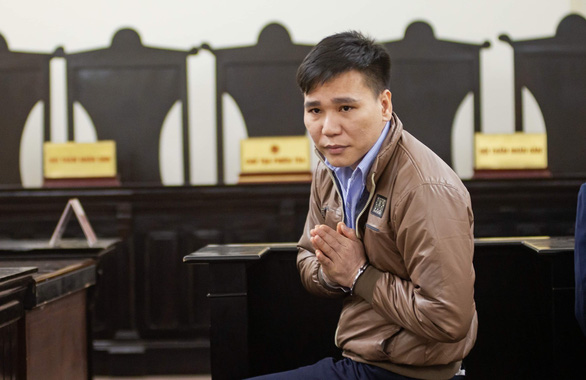 Celebrities falling from grace into a life of debauchery and scandals aren’t exactly a rare sight, and such was the story of Châu Việt Cường, a moderately popular Vietnamese singer who accidentally killed his girlfriend while on drugs.

On 5th March 2020, during a drug-taking session, the singer experienced hallucinations and believed his girlfriend had been possessed by a ghost. As such, he forcefully stuffed garlic down her throat in an attempt to expel the ghost, suffocating her in the process. Later, an autopsy of the victim’s body found over 30 cloves of garlic in her windpipe.

As Cường’s actions were deemed unintentional, he was given 13 years of jail time. 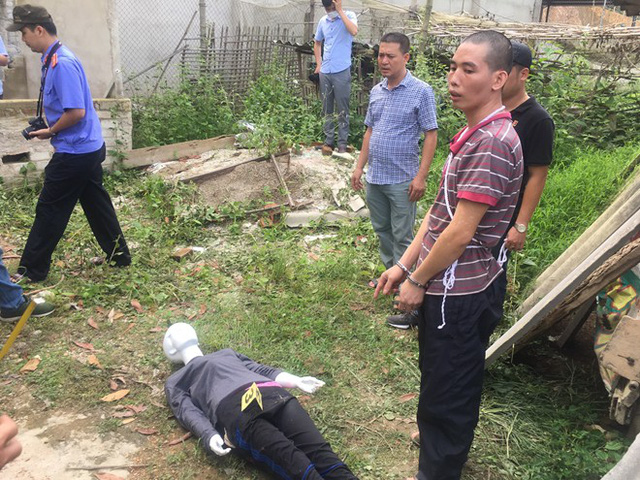 A recreation of the crime with a dummy
Image credit: Gia Đình & Xã Hội

The Lunar New Year is supposed to be a cheerful occasion, but on 2019’s Lunar New Year, that joy was somewhat blemished by constant media reports of the murder of a 22-year-old girl in Điện Biên Province, which garnered a lot of public interest due to its complicated developments.

Dubbed “the chicken delivery girl case”, it started out as what looked like a conventional, though tragic, kidnap and murder case. On 4th February 2019, the last day of the lunar year, 22-year-old Cao Mỹ Duyên, who was selling chickens with her mother at a local market, delivered 10 chickens to a customer as ordered. The girl never returned, and her body was found 3 days later with signs of having been violated and strangled. 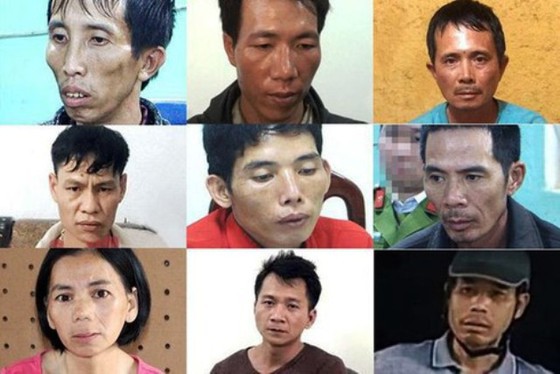 A total of 9 culprits were quickly arrested. However, further investigations revealed an unexpected twist: the victim’s mother – whom everyone thought was just a poor woman grief-stricken by the loss of her daughter – was actually a drug dealer who had previously done business with the killers.

The kidnapping of the girl was an attempt to force her mother to pay the debt she reportedly owed the killers for drug-dealing. However, the older woman refused, and that led to her daughter’s death.

Yet regardless of what her mother did, everyone agreed that the poor girl did not deserve such a horrible fate, and much to the satisfaction of the masses, 6 of the 9 culprits involved in her murder were given the death sentence. Meanwhile, the remaining 3 faced between 3 to 10 years in prison for various charges including rape and misprision of felony.

6. The concrete-encased bodies in Bình Dương Province – murders committed by a cult 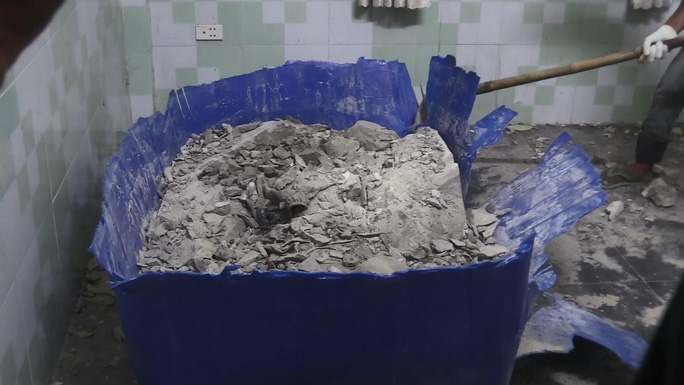 Religions and faiths can bring people peace of mind and help us better ourselves, but when misused, they can blind people into committing horrendous acts. The harrowing murders in Bình Dương Province in 2019, where two bodies were found encased in concrete, are an example of this.

Upon investigations, the police found that the victims were members of a cult that followed a twisted version of Falun Gong, where they practiced extreme exercises such as fasting for weeks on end and consuming alcohol regularly. 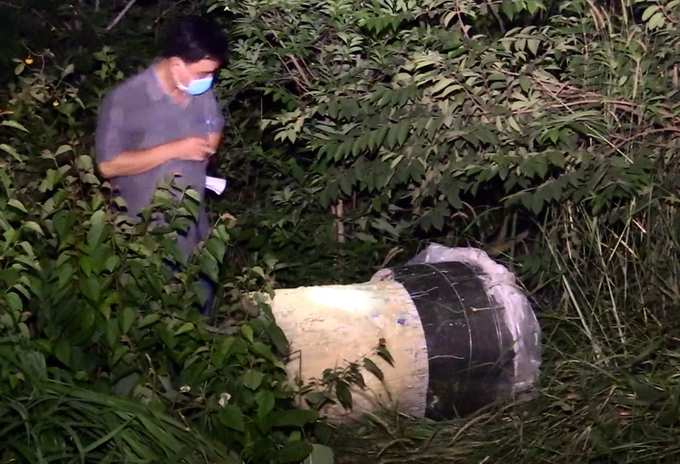 The concrete block containing one of the victim’s bodies
Image credit: VNExpress

One of the victims, a 52-year-old man, was reportedly killed following an unsuccessful escape attempt from the cult’s headquarters as he was unable to keep up with the strict practices.

Later, another man of the group also displayed signs of not following the cult’s rules. He was then electrocuted and strangled to death by his fellow cult members, as they believed he had “strayed from the righteous path”. 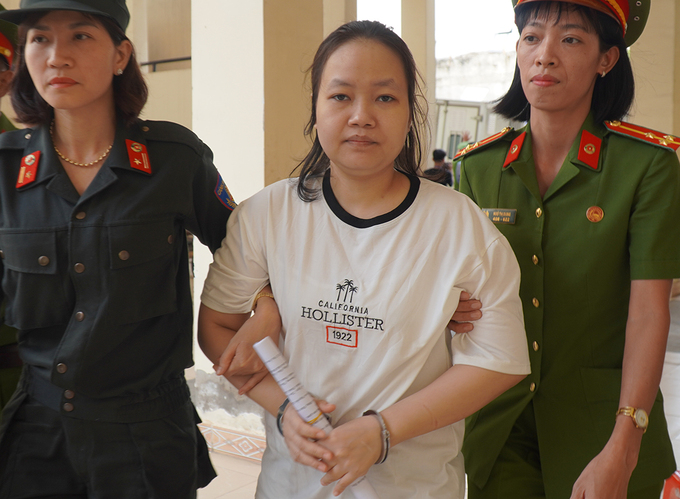 The leader of the cult at court
Image credit: VNExpress

The murderers, 4 women aged between 29 and 66, put the bodies in water tanks and filled them with concrete to cover their crimes. They reportedly continued to live with the bodies in the same house for days before moving away. The bodies were then discovered by the house’s next owner in May 2019, which quickly led to the 4 women’s arrest.

In June 2020, the leader of the group was sentenced to death, while the other three were given between 13 to 22 years in prison each. 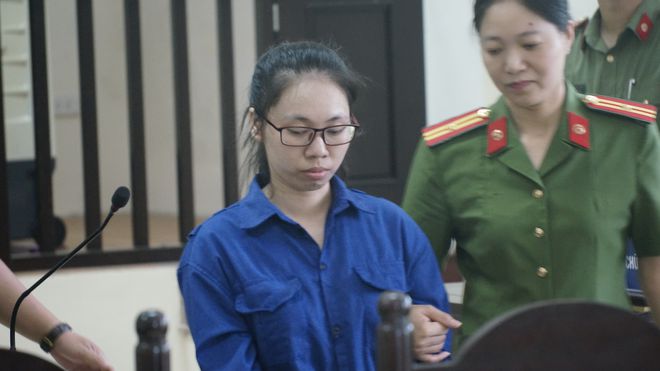 The case of Lại Thị Kiều Trang in 2019 was a tragedy caused by misplaced love. Having had an affair with her cousin’s husband, the 25-year-old woman from Thái Bình Province attempted to murder her cousin to win the man for herself, only to end up killing another innocent woman instead.

On 2nd December 2019, Trang bought 6 cups of bubble tea, injected 4 of them with the highly poisonous compound sodium cyanide (NaCN), and delivered them to Thái Bình’s Lung Hospital where her cousin worked as a nurse, disguised as gifts of gratitude from an anonymous patient.

The cousin was off of work that day, so the bubble tea was kept in the refrigerator. The next morning, one of her colleagues drank one of the cups and died after only two sips. Two others also drank the bubble tea, but luckily got the unpoisoned cups.

In June 2020, the court ruled Trang’s action as “ruthless” and “showing total disregard for human lives” and deemed it fit to give her the death sentence, which has yet to be carried out.

8. The case of Tuấn Khỉ – gunfights that claimed 6 lives 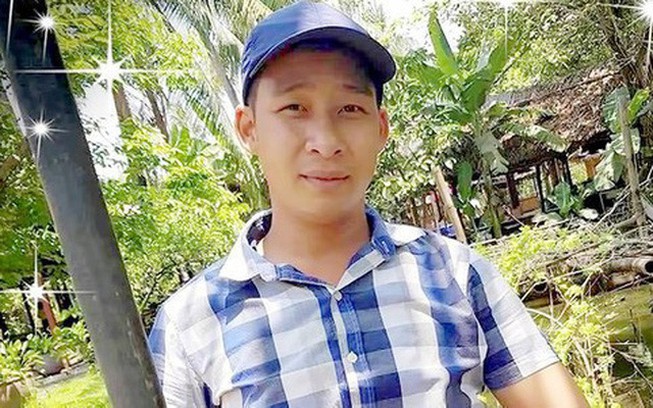 Police officers hunting down an armed fugitive is something we’ve all seen in action movies, but that’s exactly what happened in the case of Lê Quốc Tuấn, aka Tuấn Khỉ, more than a year ago in Saigon.

On 29th January 2020, angered after losing big money in a gambling session, Tuấn Khỉ brought out a rifle and gunned down 4 of his gambling mates. Then, in his hurry to escape the scene, he also killed a GrabBike driver to take his motorbike and wounded several others.

The man then holed up in a friend’s house for two weeks before he was surrounded by the police, and as he refused to stand down, he was killed in the ensuing gunfight.

9. A mother and stepdad beat a toddler to death 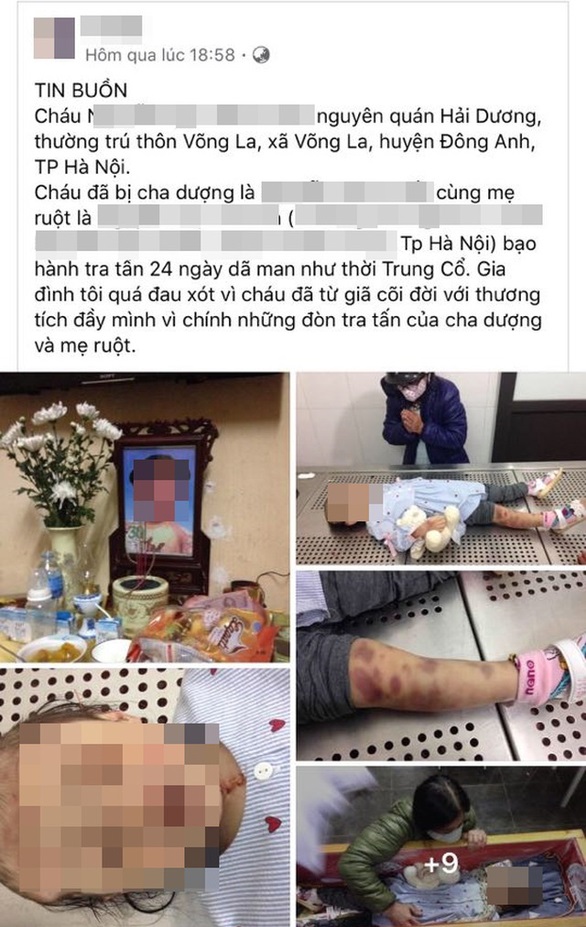 Pictures of the victim’s body shared by her relatives on social media
Image credit: Tuổi Trẻ

A relatively recent case that still brings tears to our eyes is a domestic abuse incident that happened in Hanoi in March 2020, when a 3-year-old girl was beaten to death by her own mother and stepdad.

The cold-blooded mother in question is Nguyễn Thị Lan Anh, then 29 years old. Following a divorce from her ex-husband, Lan Anh left their child in her mother’s care, then got married and lived with Nguyễn Minh Tuấn in Hanoi. 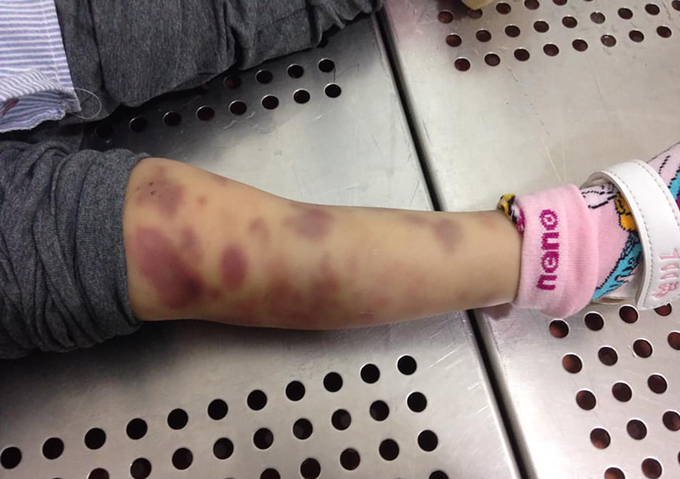 On 5th March 2020, the couple brought the child to their house, where she stayed for over 20 days. It was there that the tragedy happened: Lan Anh and Tuấn reportedly beat the child multiple times during this period, going so far as to puncture her fingers with needles to keep her from sleeping. It wasn’t until the girl fell into a critical state on 30th March that they rushed her to the hospital, where she was declared dead on arrival due to head trauma.

The police later found drugs in the couple’s apartment, and they admitted to having taken the substance when the beating happened. 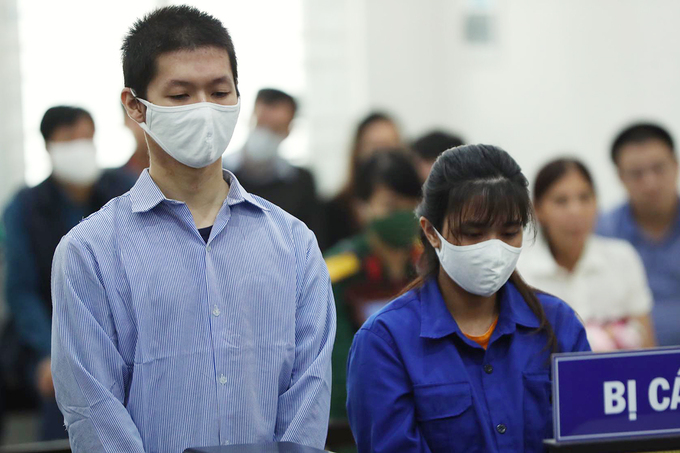 Pictures of the victim’s heavily bruised body shared online by her other relatives moved many people to tears and caused massive outrage against the murderers’ inhumane actions. They also showed no sign of remorse in court, with Lan Anh even trying to blame the victim’s wounds on her own mother, saying that the older woman was also abusive toward her as a kid.

In the end, Nguyễn Minh Tuấn was sentenced to death, while Nguyễn Thị Lan Anh was given a life sentence.

Horrifying crimes in Vietnam in the past decade

Some of these terrible crimes happened pretty recently, while others are already a decade old. Regardless, the pain they caused is no doubt still felt by families of both the victims and the culprits.

Our deepest condolences go to those who’ve lost their loved ones in these events. 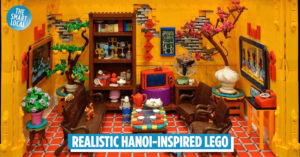 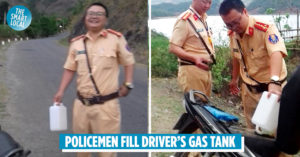