Puzzled foodie asks a cook a question about his hotpot recipe

From forgetting important ingredients to overlooking a step that makes the dish turn out much worse than expected, home cooks who follow online recipes face a lot of challenges. As much as we want to contact the owners of the recipes we follow with our questions and even complaints, not many of us have the boldness to do so.

But that’s not the case for Tra My, a stalwart Hanoian foodie. Puzzled for over a month by a mix of Internet slang and Vietnamese dialect in a hotpot recipe shared by a Vietnamese cook living in Japan, she took the initiative to contact the cook online at 3.15AM in search of clarification.

It started with a hotpot recipe

In a post shared on a Facebook page Cháo Hành Miễn Phí, Trần Thành Trung, a Vietnamese citizen living in Japan, shared his exciting conversation with his fellow group member Tra My from Hanoi.

Both Tra My and Trung are group members of  Cháo Hành Miễn Phí, a group where members share life stories that they deem interesting. Impressed by many of Trung’s posts and his story-telling skills, Tra My had decided to check out his Facebook page to learn more about him.

To her surprise, most of the posts on his Facebook page were about cooking – he regularly shared his recipes for both Vietnamese and Japanese dishes. Out of his many recipes, Tra My had been particularly interested in a Japanese hotpot recipe he posted on 11th July. 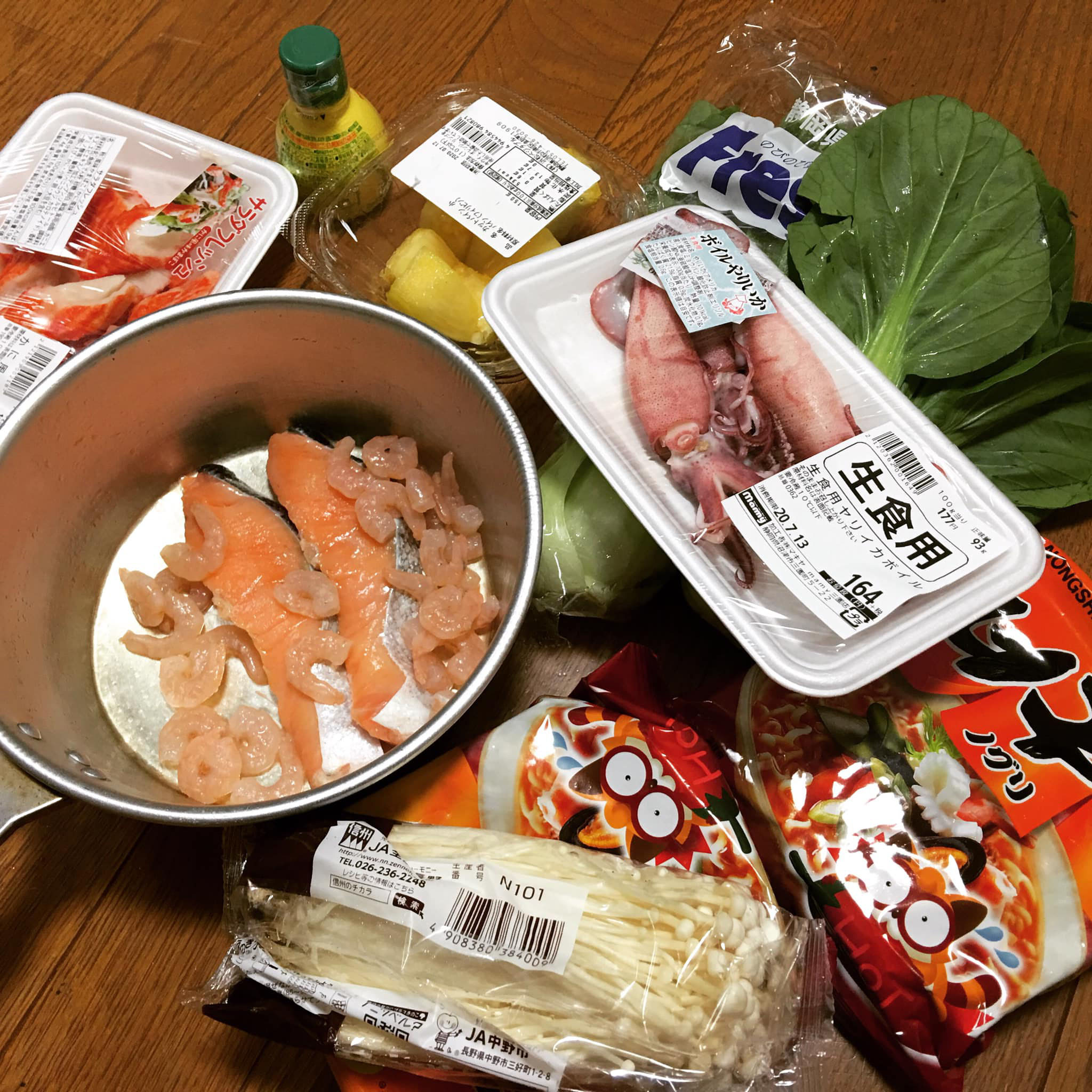 The ingredients Trung listed out for this dish include frozen salmon, shrimps, squid eggs, crab sticks, cabbage, a mushroom, lemon juice, and half a box of a mysteriously named ingredient called  “I wanna 😗 you”, which could be used for desserts. 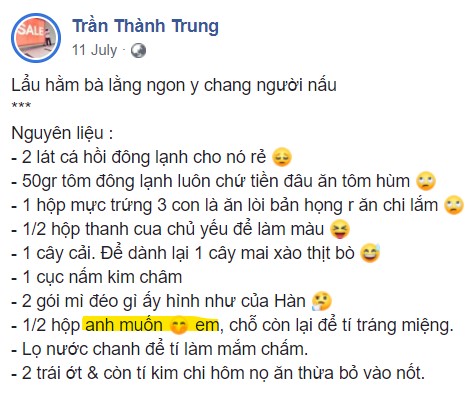 Puzzled by the name “I wanna 😗 you”, which is not found in any food dictionary in any language, Tra My was determined to figure it out. The emoji 😗, which was the only hint, simply means “kiss”. But still, “I wanna kiss you” cannot possibly be a cooking ingredient.

After over a month of researching about this ingredient in vain, this relentless foodie decided to contact the cook for the answer.

The “I wanna 😗 you” ingredient

It is not known if Tra My is a night owl, but texting a stranger at 3.15AM in the morning must have required a lot of courage on her part. 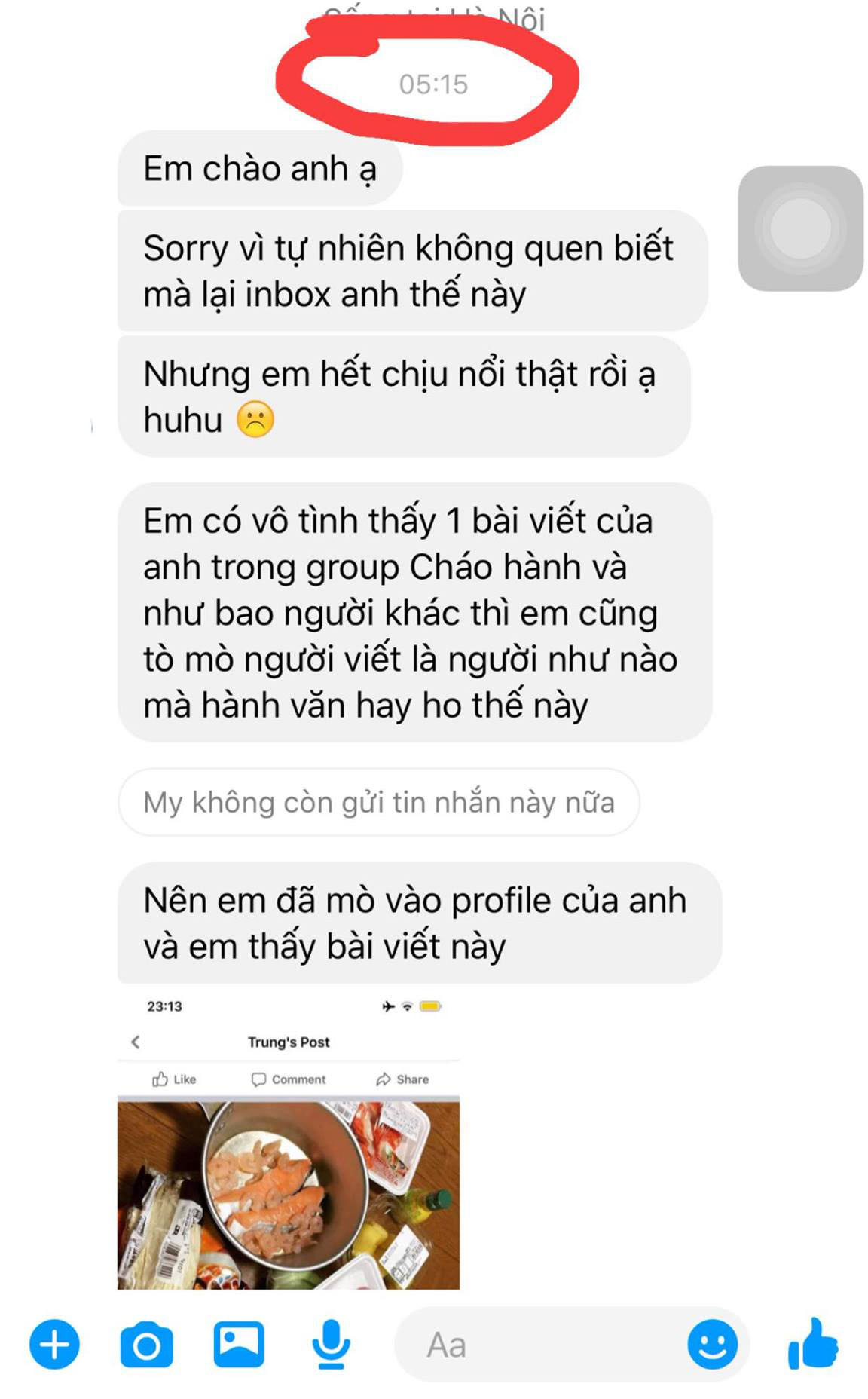 In her long, detailed message, Tra My explained why she reached out to him. 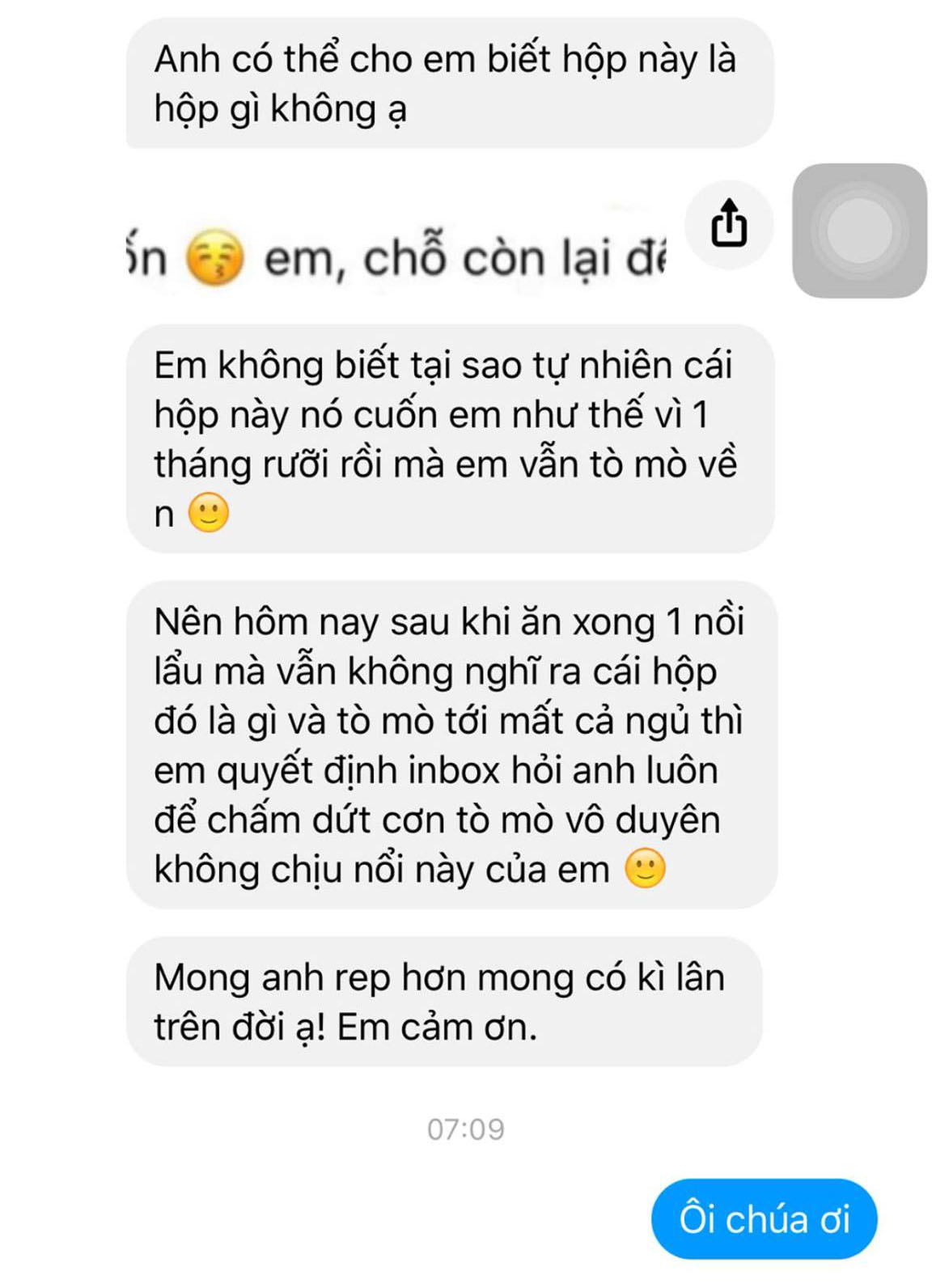 “Can you tell me what this box is? It’s been over a month and I’m still curious about it. I ate the hotpot dish this evening but still couldn’t find out what that missing ingredient was. My curiosity has caused me to be sleepless, so I decided to ask you directly about it so I can be delivered from this obsession,” Tra My said.

Wowed by the interesting message from a stranger, Trung’s first reply was “Oh my God,” followed by his expression of surprise that she had been struggling with his recipe for so long. 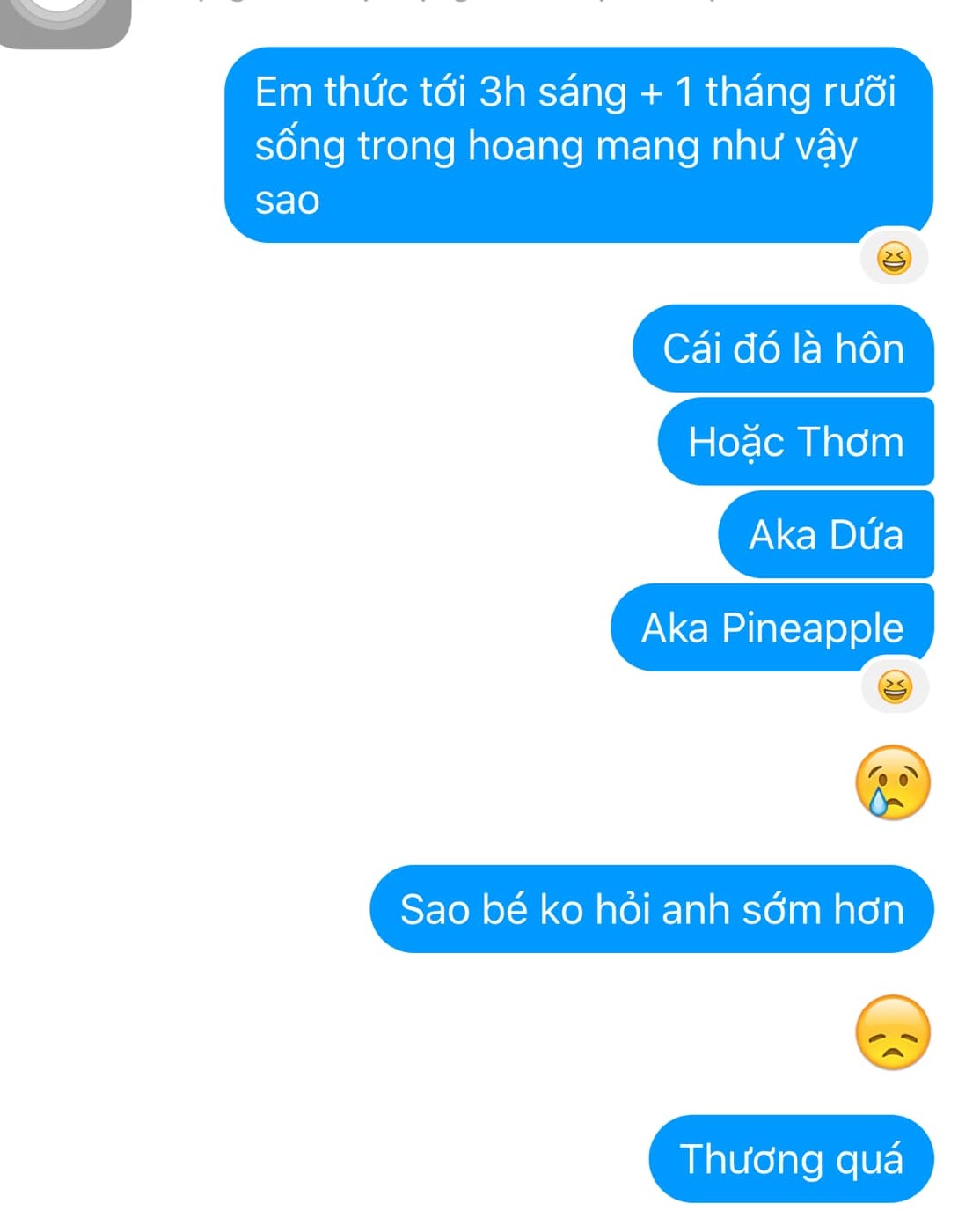 “It’s a kiss, also known as pineapple,” Trung finally gave Tra My the answer she’d been seeking for over a month. 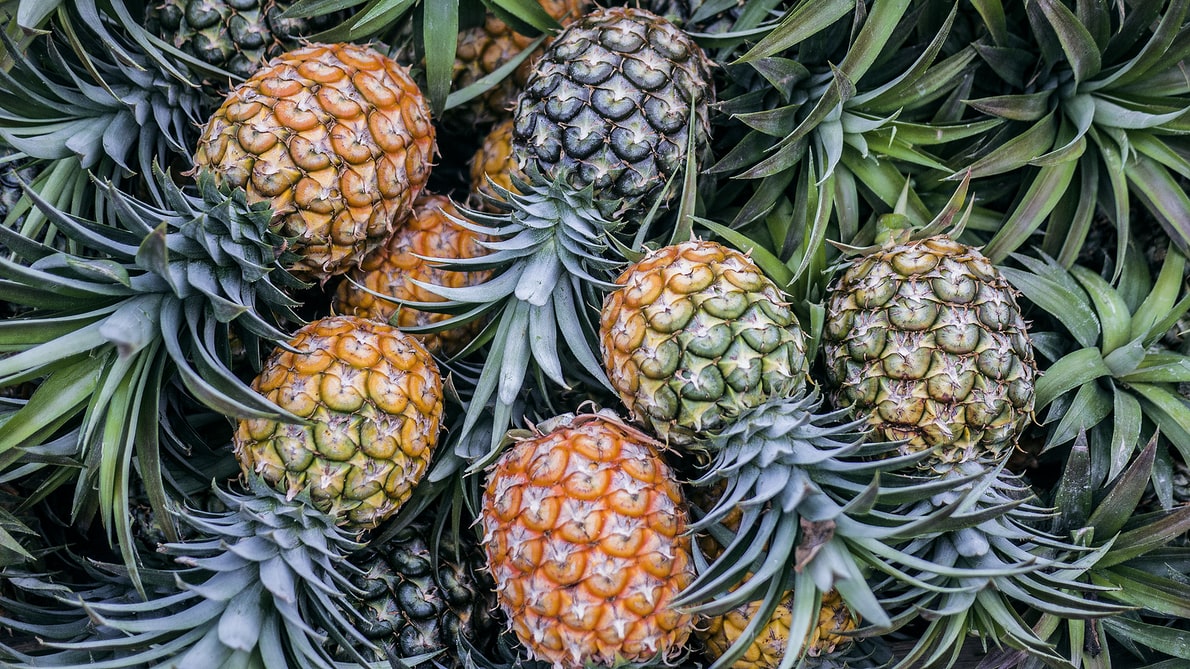 Turns out, the Vietnamese word for “kiss” is “hôn,” which also happens to be another word for “thơm”. While “thơm” means “kiss” in its verb form, it means “pineapple” as a noun, and is commonly used in Southern dialect.

Meanwhile, pineapples are called “dứa” in the North. That’s the reason why Tra My, who is Hanoi-based, was not able to figure out the wordplay used by Trung, who’s originally from Saigon.

“You could have asked me earlier.” Trung added to the conversation.

All’s well that ends well. Tra My got the mysterious ingredient she came looking for, and Trung’s day was brightened up by a stranger’s open admiration for his recipe. In his post shared on the Facebook group, Trung said, “I really want to ‘pineapple’ you. You’re such a cutie.”

Desperate foodie texts a cook about his hotpot recipe

As a saying goes, “He who asks a question remains a fool for five minutes. He who does not ask remains a fool forever.” Tra My could have ignored the ambiguous ingredient and put her own spin on the hotpot dish instead, but she decided to put an end to her curiosity and figure out what the ingredient was.  And her boldness was rewarded – she got what she came for.

It remains unknown how the conversation between Trung and Tra My went on from there, but this could be the beginning of a very interesting relationship between two people who are in love with food. 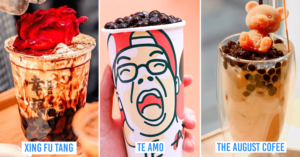 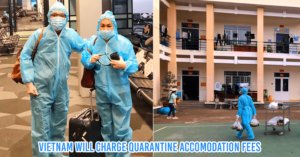