On 18th August, McDonald’s Vietnam announced the launch of its locally-inspired pho burger (Burger vị Phở) on a Facebook post and caused a sensation among the Vietnamese Facebook community.

The idea of fusing pho, a meticulously cooked noodle soup, into burgers, a Western fast food classic, has caused many netizens to express their skepticism in the post’s comments section.

Instead of ignoring the comments or putting out explanatory statements as most brands would do, McDonald’s responses to the situation couldn’t have been more unexpected. By patiently replying with sad-faced emojis and cute replies to nearly all comments, McDonald’s quickly turned the situation around and made many want to try their pho burgers.

Over the years, McDonald’s has branched out into many countries, followed by a variety of locally inspired dishes to appeal to local customers. From Singapore’s Nasi Lemak burgers to India’s Dosa Masala burgers, McDonald’s always tries to offer hungry fans food inspired by local cuisine, and McDonald’s Vietnam is no exception. 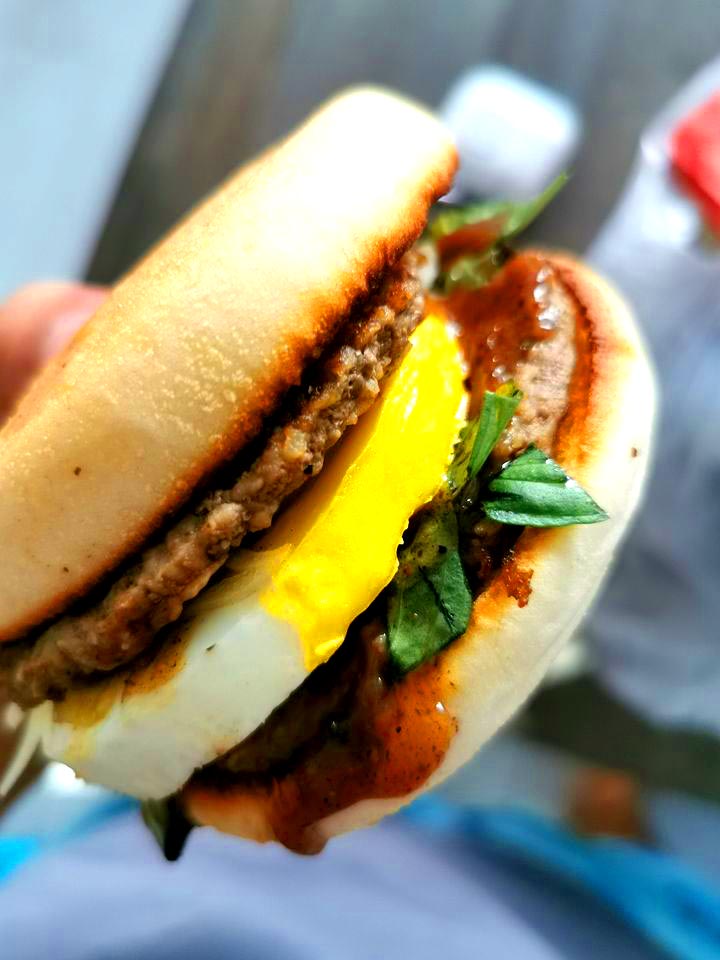 Priced at VND69,000 (~USD2.95), the Pho Burger boasts an Australian beef patty with one fried egg in the middle, and is drizzled with pho broth-flavored sauce and herbs and veggies commonly used in pho such as basil, coriander, and onions.

Quickly after the new burger announcement, Vietnamese netizens flooded McDonald’s Facebook page with comments about this new East-West fusion menu item. While many had rushed to McDonald’s outlets to try this dish and posted their reviews about it, many also gave McDonald’s a piece of their minds even before trying the burger.

Most comments said that a pho burger’s price was nearly twice as high than that of a real bowl of pho, while the rest simply made fun of the item.

Despite facing a plethora of skeptical comments and complaints about the burger’s price, McDonald’s Facebook page administrator handled the situation impressively. 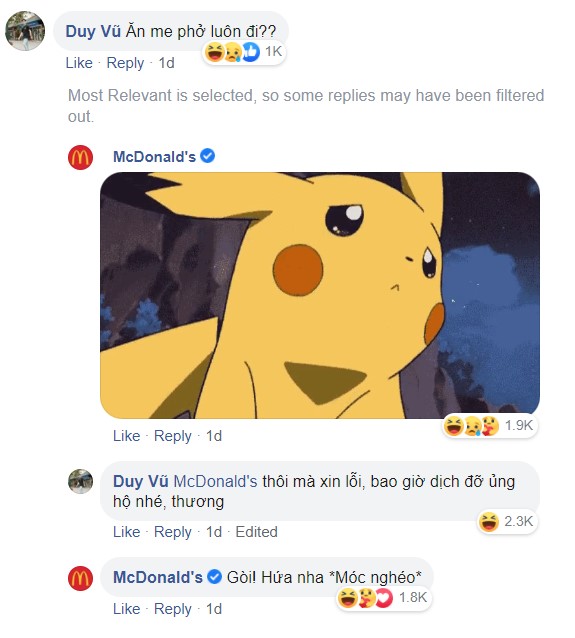 Normally, a Facebook page administrator would simply let a comment like this slide, but McDonald’s surprisingly replied to it with a Pikachu picture with a sad expression.

This cute reply from McDonald’s itself came as a big surprise to many and gained 1,900 likes from netizens. It was so cute that it might have softened Duy Vũ’s heart that the critical netizen replied apologetically, “Okay, I’m sorry. When the COVID-19 pandemic is over, I’ll go over there to support you. I love you.”

Not satisfied with this apology, McDonald’s pressed on, “Okay! You promised. Fingercrossies!” referring to the hand gesture commonly used to enforce a promise. 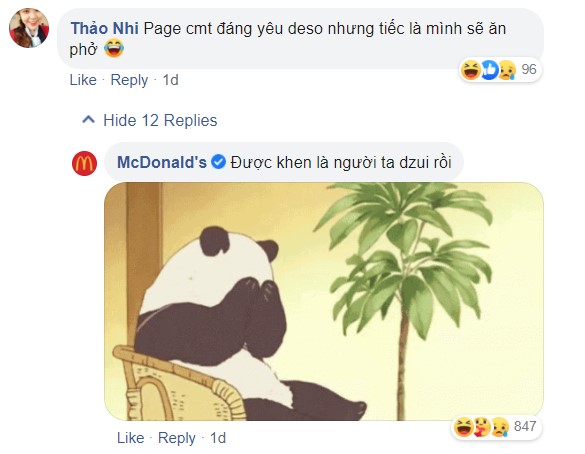 Unfaltered by the netizen’s open rejection, McDonald’s replied with a sad panda picture, “At least you complimented me and that’s enough to make me happy.” This heart-melting reply won McDonald’s 847 likes from netizens.

McDonald’s creative responses quickly gained positive attention and spurred many netizens to try the burger and troll the brand in its comment section even further. 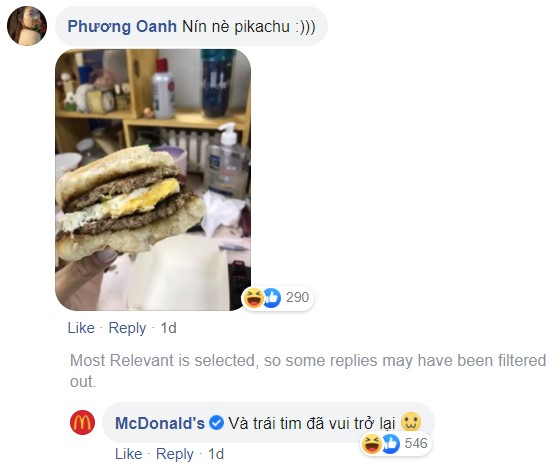 “Stop crying, Pikachu,” Facebook user Phương Oanh posted a photo of her half-eaten pho burger in the comment section as a sign of her support for McDonald’s.

Apart from trolling comments, Vietnamese foodies left their feedback on the burger in the comment section to give other netizens a better idea about what to expect. 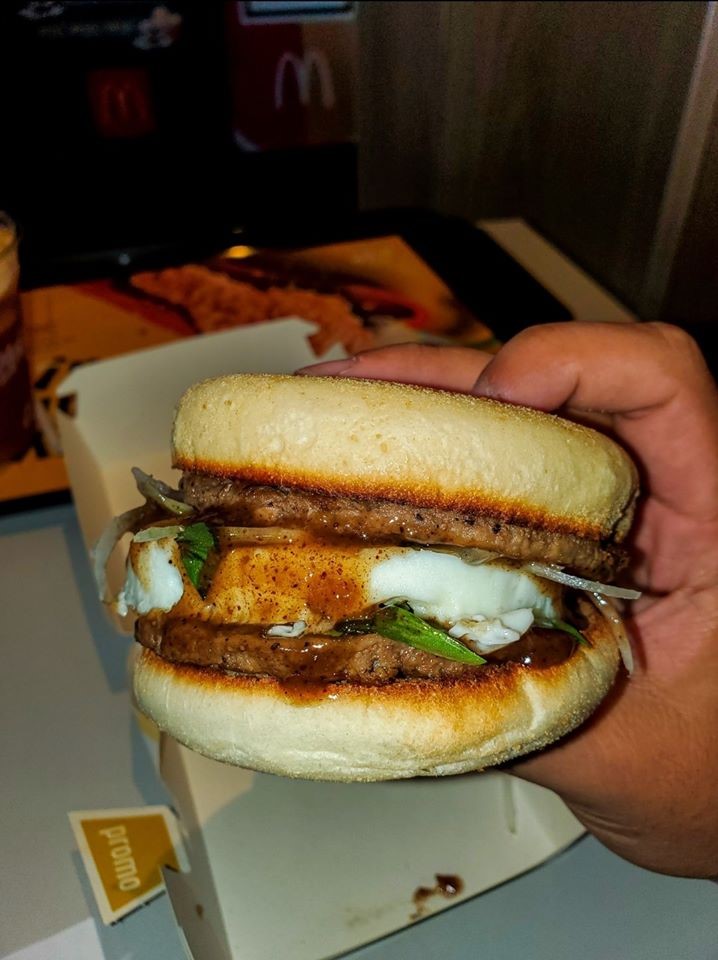 Facebook user Lê Công Thoại shared his pho burger and noted, “It’s really worth a try. The pho sauce matches perfectly with the basil and coriander.”

Meanwhile, Facebook user Jason Tran had a different opinion, “The beef patties were a bit dry. There was a distinct flavor of pho, though with a lack of finely ground chili and black sauce. Better add lime to it for an authentic pho flavor.” 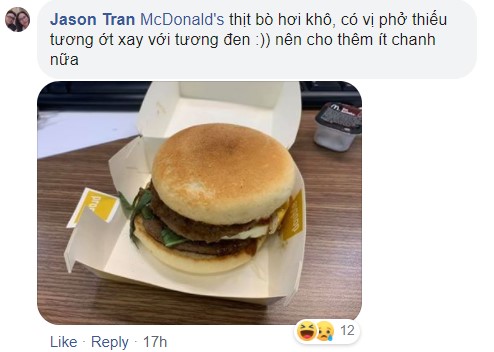 McDonald’s adds a Pho Burger to its menu

In recent years, Vietnamese cuisine has been all the rage with global diners, especially pho, a noodle soup filled with delicious broth and nutritious ingredients. However, its launch of a brand new burger with a pho-flavored twist has drawn mixed reactions.

Even though people are inevitably skeptical about any East-meets-West culinary fusion item, McDonald’s has been handling the situation with patience and creativity, which has left a positive impression with potential customers.

McDonald’s pho burger story is a great example of how a restaurant’s interactions with customers can greatly improve their experience and change their minds. 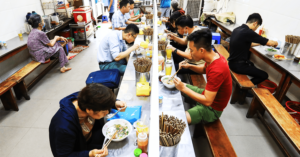 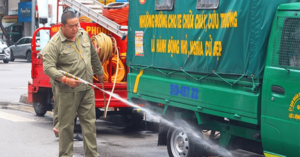