What you MUST DO in Penang 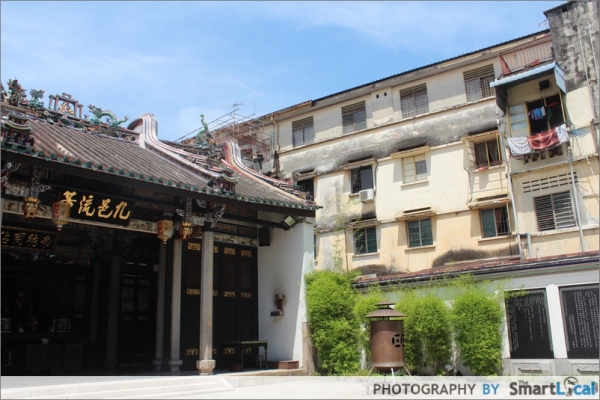 This is hands down the number one place to visit in Penang. Georgetown is its capital and its located at the north eastern part of the island. There is a lot of history in this area, being founded in 1786 when Penang was a popular trading post in Asia. So all over this town you see temples and colonial heritage buildings still standing that played historical roles in the city’s past.

Most buildings are weathered down and some abandoned, giving off that charming rustic feel that photographers and culture buffs adore. It a one of a kind city made up of shophouses and in 2008 it was recognised as a UNESCO World Heritage Site. Singapore doesn’t even have one so those titles aren’t easy to get!

And it gets better! Just last year a talented Lithuanian artist named Ernest Zacharevic was commissioned to start a series of Wall Murals. It instantly made this serious heritage site fashionable. What was known as cultural and historic Georgetown suddenly became cool to youngsters attracting a whole new generation. 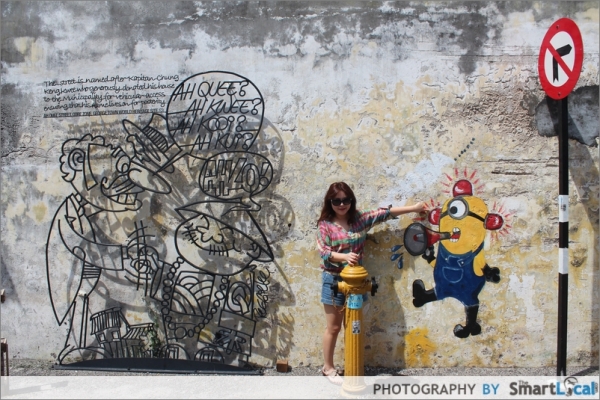 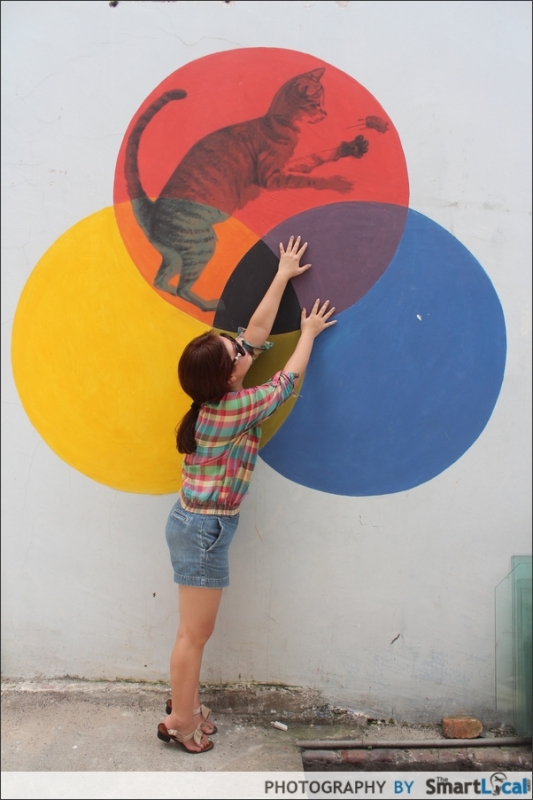 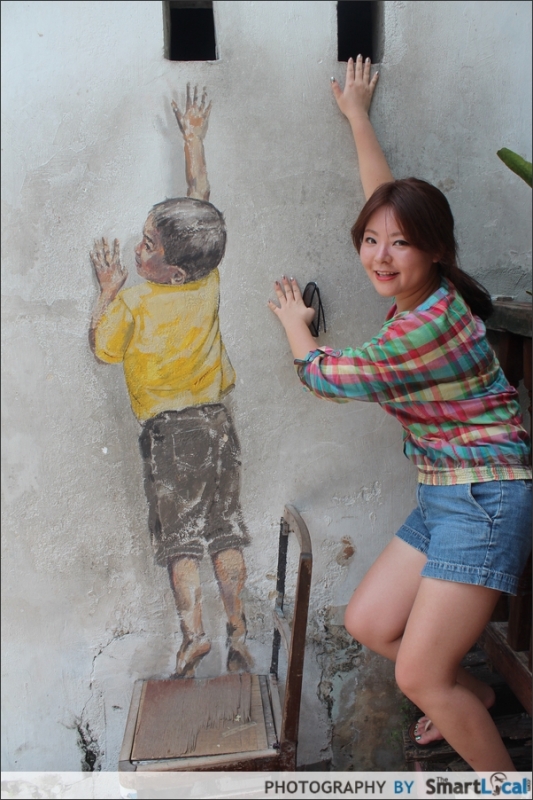 Malaysians visit Penang for its amazing food. And now young Malaysians have another very good reason to come to Penang. Especially them instagramers! You get to cycle around the city discovering the different buildings and the art. Bicycle shops usually have maps with locations of the murals making it like a mini treasure hunt.

Some can be really hard to find! We bumped into so many local Malaysians here when asking for directions, only for them to say they weren’t local and didn’t know! 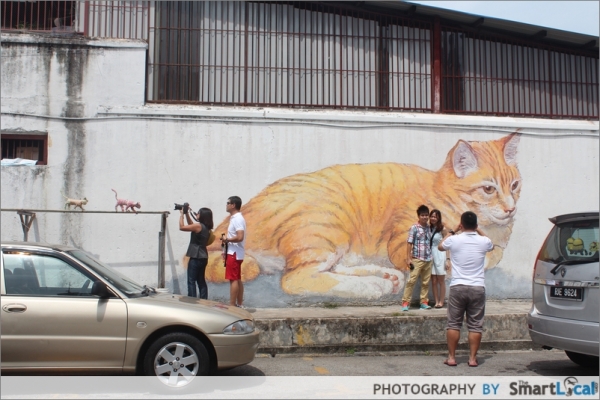 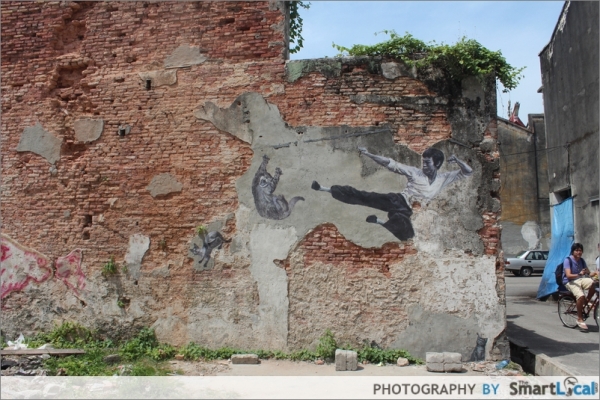 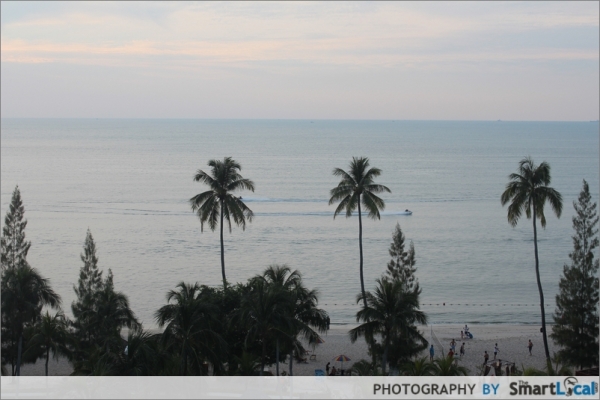 You really just have two options of staying in Penang. At some random motel around the island or where all the best 5 start hotels are located at Batu Ferringhi. Why Batu Ferringhi? Its located on the beach so you can walk from your hotel right into the ocean. 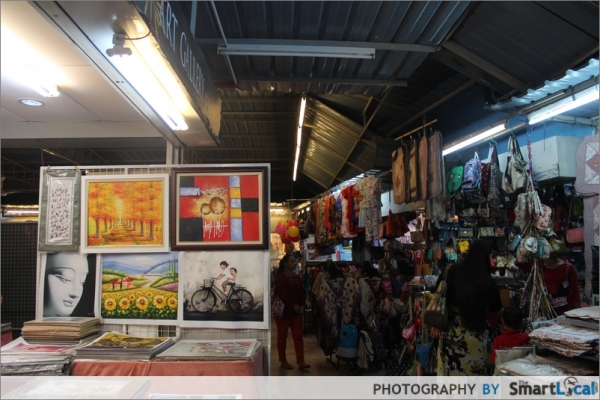 Also because of the industry that has developed around it. It has become a big bustling enclave of its own with a night market 4 football fields long. It was so far that after walking to the end we needed to take a trishaw back! 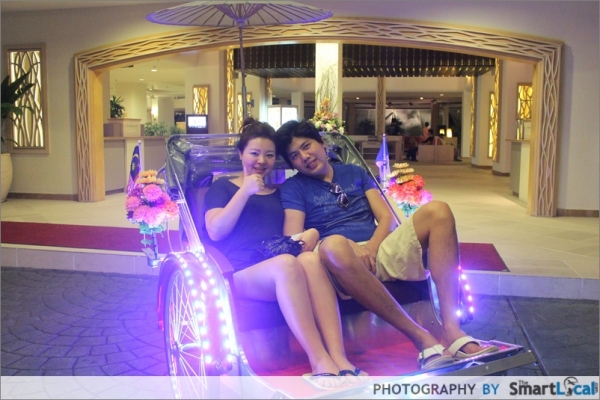 On the first night we stayed at Golden Sands Penang. Loved their 4 gorgeous swimming pools, its very family friendly and reasonably priced. It’s won awards for being the best 4 star hotel in Malaysia but it really feels like a 5 star resort without that high price tag.

Even during our dinner at Sigi’s Bar & Grill, there was live cultural dance entertainment and musicians performing for guests! Something you don’t often even in 5 star hotels. Oh and families will LOVE Adventure Zone at Golden Sands. Check out popular Daddy Blogger Andy Lee’s blog post here – the giant slides look like so much fun! 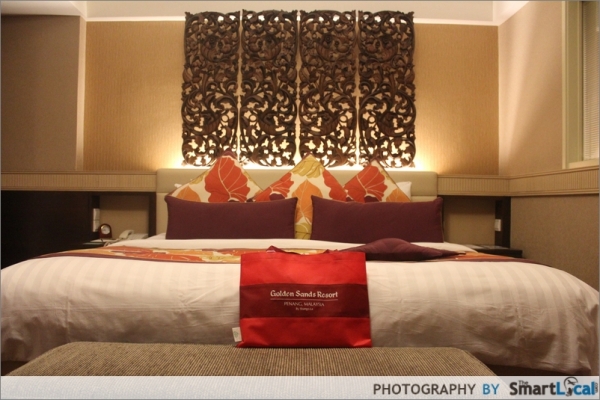 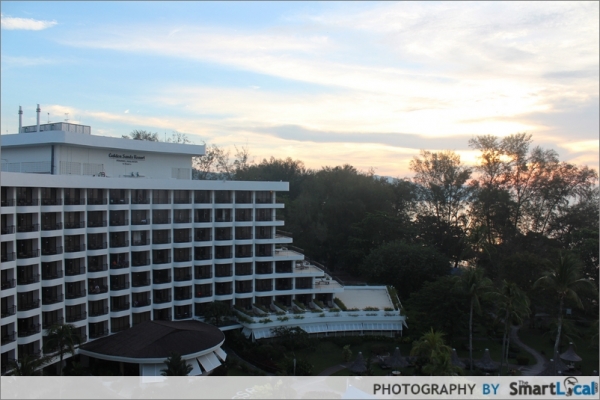 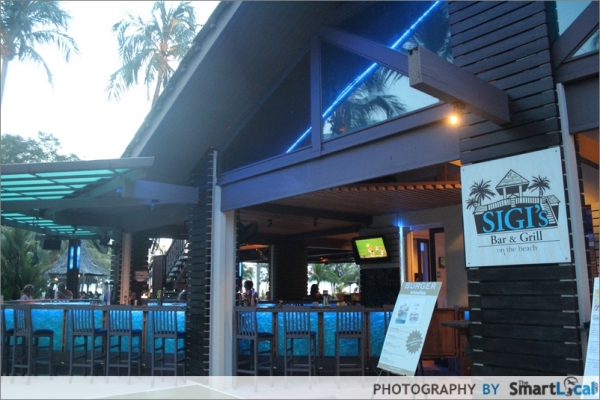 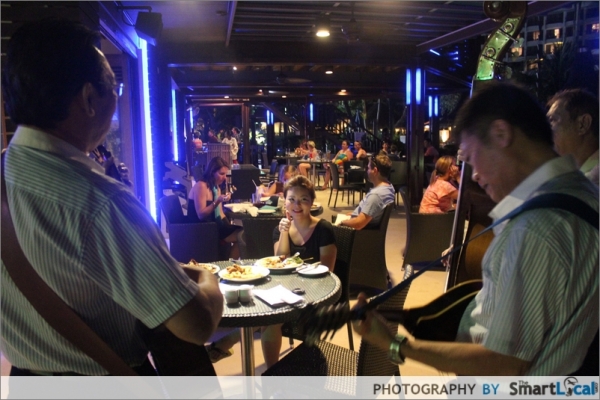 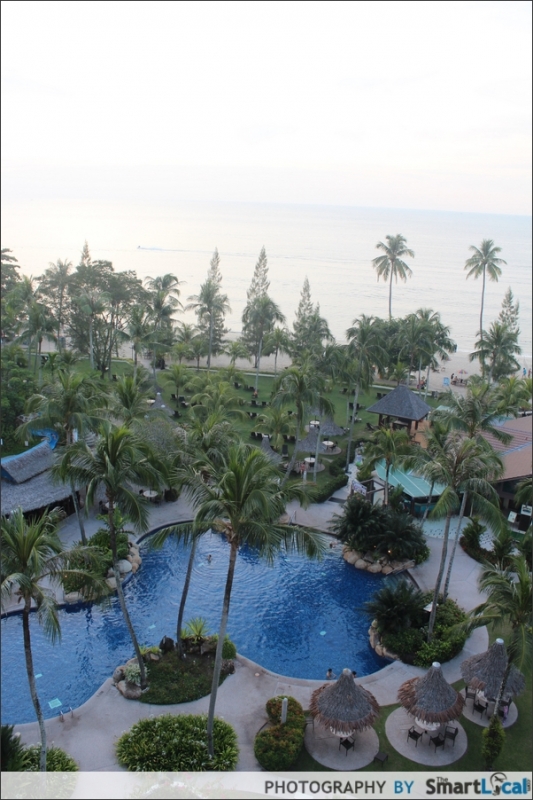 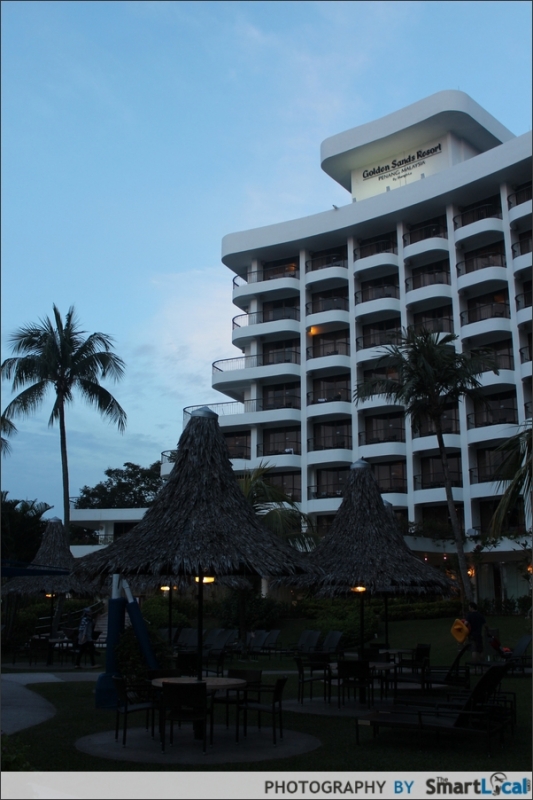 On the second night we were at Rasa Sayang, Shangri-La, the more upmarket luxurious beach resort option. The resort is beautifully landscaped, the type postcards are made off. Our room came with the lovey huge bathroom and there was even an outdoor bathtub in the balcony!

Here’s a shot of their private pool. They have two pool areas, one only for guests who stay in Rasa Wing. 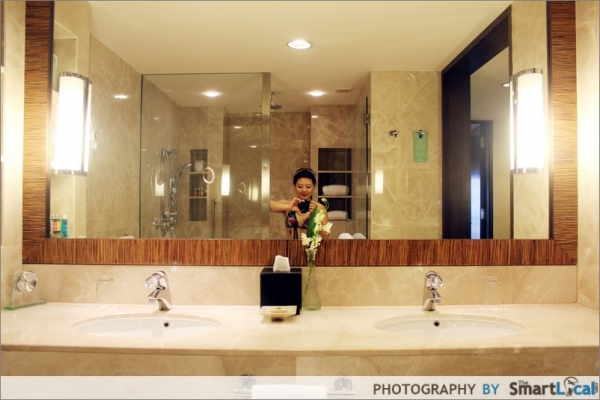 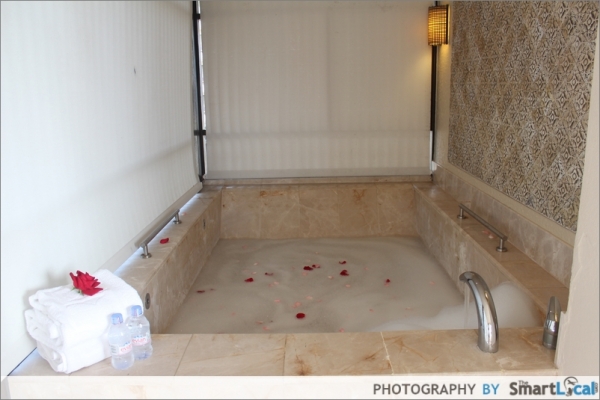 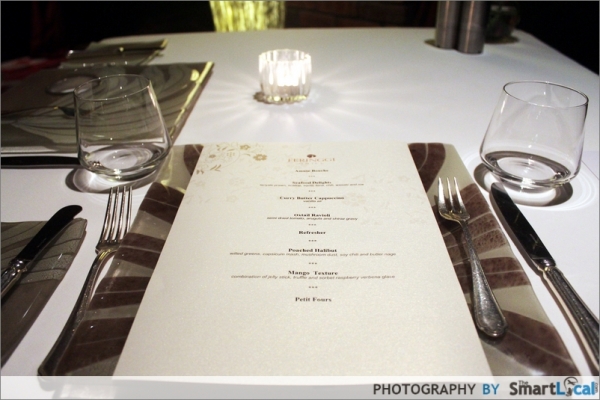 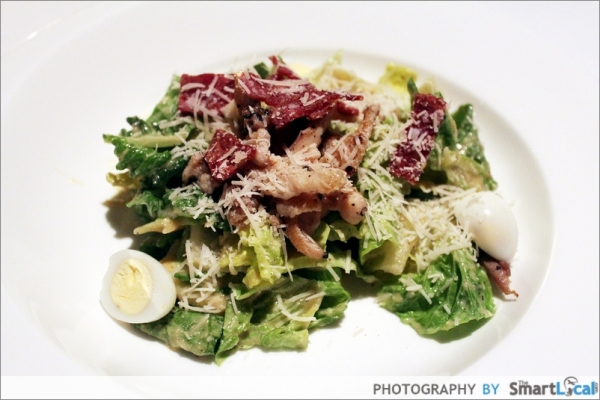 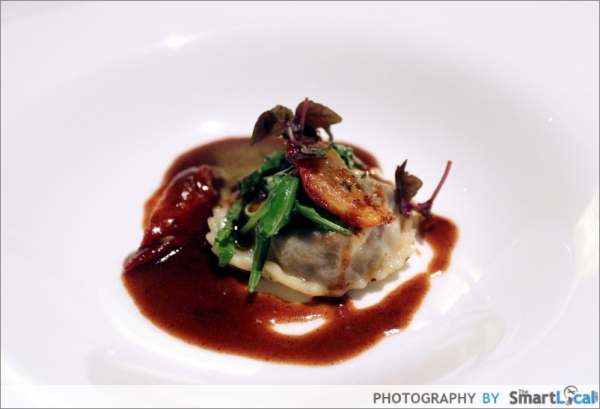 The food here is incredible – they had the restaurants we enjoyed most in Malaysia. Their Ferringhi Grill has received accolades for being one of the top 100 restaurants in the world where they prepare some of the dishes right in front of you from scratch. Their Caesar Salad is a must order, its the best Caesar Salad we’ve ever had. Their casual dining ‘Spice Market’ is where we had our best breakfast of the trip.

With the resorts being on the beach, you can catch fantastic moments like this. 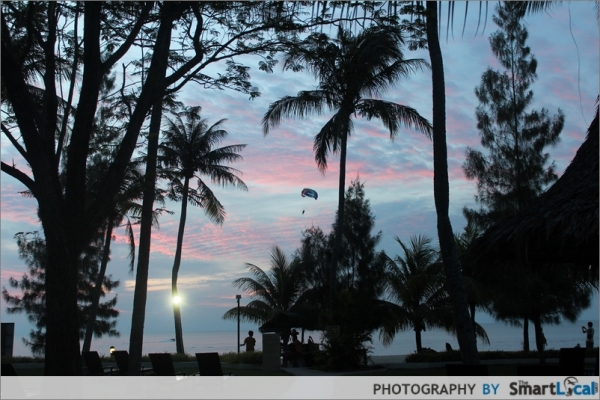 We will be posting reviews of these hotels later in the year so stay tuned!

Penang is a lot like Singapore in that sense, its nature as a trading port has resulted in a mix of cultures with their own unique interpretation of dishes . It’s known as the food capital of Malaysia, with some unique dishes only available in Penang.

Nasi Kandar is a HUGE dish here which you probably have never heard of because they don’t have it in Singapore. We finally found the elusive ‘hidden in a car park’ Line Clear and the search was well worth it.

And for those in Singapore who want to taste a bit of that Penang food magic, you can check out Wei Ling’s post on the Penang Buffet at Traders hotel. Chefs from Golden Sands were flown down specially to prepare the dishes and it runs till the 31st of October.

4. Other things to do

There were other places we really wanted to check out too like going up Penang Hill or admiring the architecture of Kek Lok Si Buddhist Temple but with 3D2N we didn’t have the time so can’t comment further. Maybe the next time we’re back here!

If you’re looking for more ideas on what to do be sure to check out the Penang Eat Play Shop Guide!

Video Highlights of our trip

More from our One Week with Shangri-La Malaysia series: