We’re familiar with Singapore being touted as a food paradise. We think that nothing comes close due to our fusion-cuisines from the melting pot of various ethnics and cultures. Interestingly, what many of us don’t know is that Penang’s food culture is actually very much like ours too! Penang has a similar mix of the Chinese, Malay and Indian ethnics, which gives rise to signature dishes that are often inspired or tinged with flavors across cultures.

Hands up, those of you who have tried at least one Penang dish before, and have fallen absolutely in love with it. I’m expecting plenty of hands, because really, how do you not love their rich and savory flavors?

Last Friday, we were hosted by the kind folks at Traders Hotel to try out their Penang buffet that will be available at Cafebiz from 13 Sep to the 31st of October! It presents a wholesome menu of well-known Penang dishes prepared by Golden Sands Resort guest chefs Lim Thow Shong and Ridzuan Bin Mat  – who were flown down specially to prepare the dishes. Expect to indulge in Assam Laksa, Char Kway Teow, Loh Bak and the like! Apart from its Penang dishes, the usual select of International Cuisines remain as well.

P.S: Get ready to feel hungry. 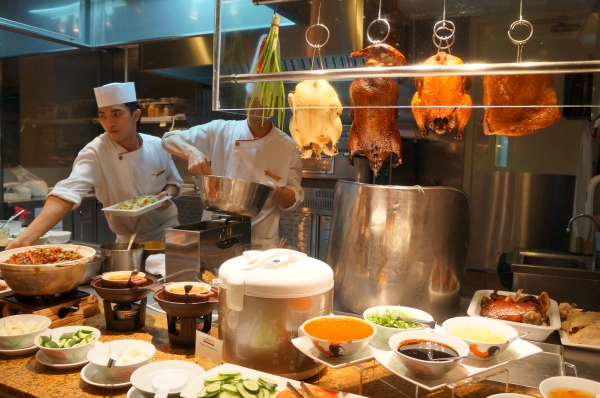 You’ll find Hainanese Chicken Rice at this counter – Singaporeans are no stranger to chicken rice. I tried a bit of the roasted chicken and it was pretty good. I’ve tried a few at other buffets but weren’t impressed by those, so I almost gave this a miss. It was succulent and marinated well. 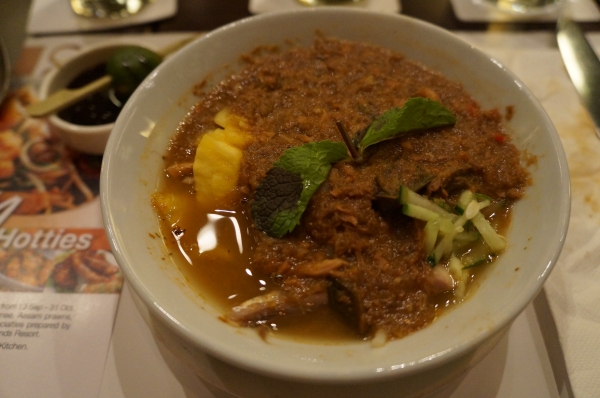 I’ll admit that I’m not exactly a fan of Laksa these days because of how sinful it is with all that coconut milk. However, this Assam Penang Laksa was honestly delightful. It’s pretty different from our hawker Laksa here due to its distinguishing assam (or tamarind) which gives the soup a tangy and sour tinge. Savory, spicy and refreshing!

See those pineapple bits as well? Yum. Not everyone will like this variant though because its very different from Singapore Laksa. Guess it’s up to your personal preference! 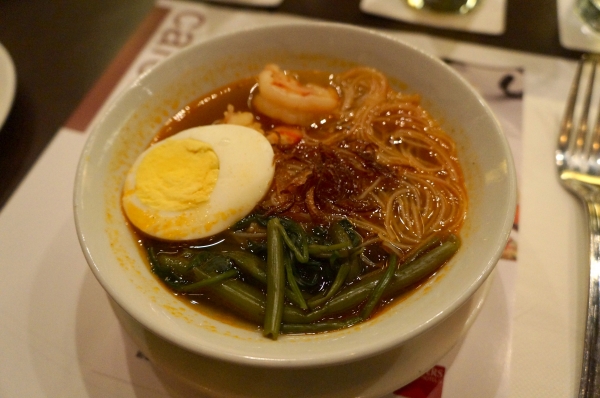 This Penang Prawn Mee was tasty as well and served with fresh prawns and kang kong (water spinach) in a rich prawn broth. Chili oil was also added to give it a twist, although the spiciness wasn’t very evident since it’s meant to be that way. I liked that this wasn’t overly salty nor MSG-laden, although I preferred the Assam Laksa over this 🙂 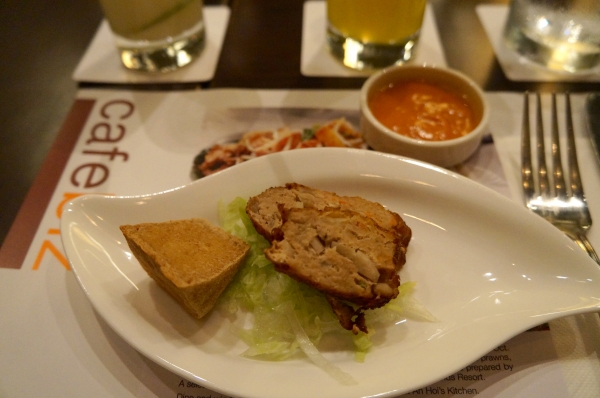 Loh Bak, which is essentially marinated minced pork rolled in thin soybean sheets and then deep-fried to perfection, resembles Ngoh Hiang, except without prawns. This is a Penang street food favorite, and Penangites (interesting name isn’t it!) would usually order a combo plate of Loh Bak, fried beancurd and prawn fritters. Chock up your own platter at the counter above! Add a dollop of chili dip to complete it! Left: Assam Prawn. This reminded me of the Assam Prawns my grandparents used cook for our weekly large family dinners, so I really liked it. Moreover, the prawns were juicy and fleshy! Again, the tamarind taste of assam was striking. 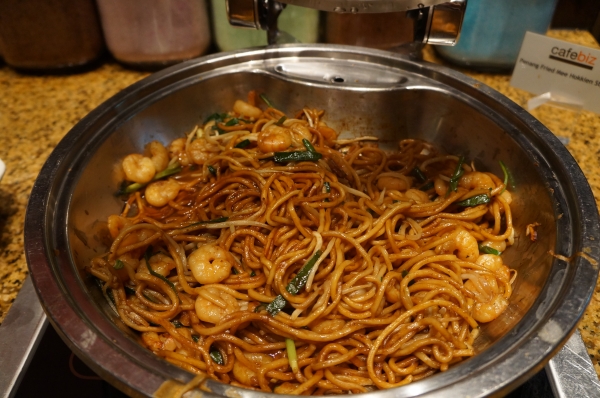 Penang Fried Hokkien Mee! A medley of thick yellow noodles wok-fried with dark soya-sauce. Hokkien Mee will forever remain one of my guilty pleasures. My craving for this dark-version instead of the Singapore variant has snowballed ever since I’ve been to KL, and I was pretty happy to see this here! They could’ve added small pieces of sliced pork to complete this more wholesomely though. The one dish that had all of us nodding in approval – Pengat Pisang! It’s essentially simmered bananas in creamy coconut sago. The velvety silkiness of thick coconut milk complimented perfectly the fragrance of gula melaka, and the fact that it was a warm dessert had my senses coated with warmth and comfort (I was feeling pretty chilly!)

It got slightly jelat for me after a while because the coconut milk was too sweet, but I still loved it nevertheless! 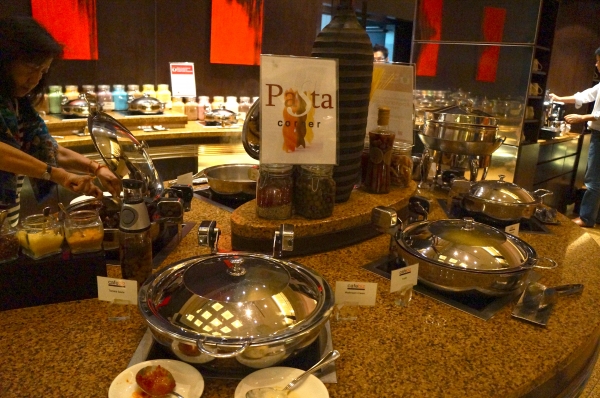 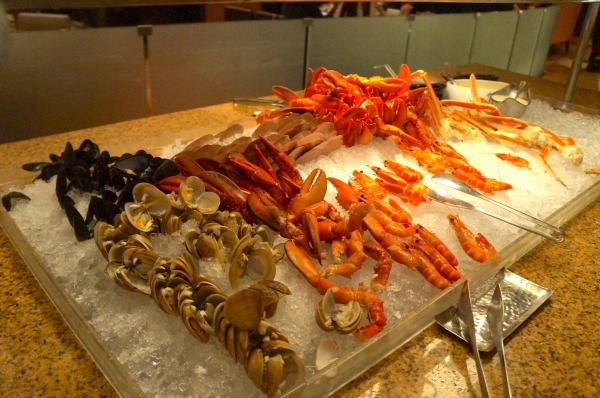 Fresh ocean catches include the Boston Lobster, Clams, Prawns and the likes. Otherwise known as the ‘totally-makes-the-buffet-worth-it-counter” to many of my friends Rojak is actually a Penang favorite as well, and you would’ve probably realized by now how similar our favorite foods are. Have fun tossing up your own storm while adding in a generous dollop of thick prawn paste. Make sure not to create a mess though…

There was also a section on more Western food, as well as Japanese cuisine that I did not manage to take pictures of. The salmon sashimi was refilled pretty quickly from what I saw, so props to them for always keeping sight of wherever needed to be topped up with more food! 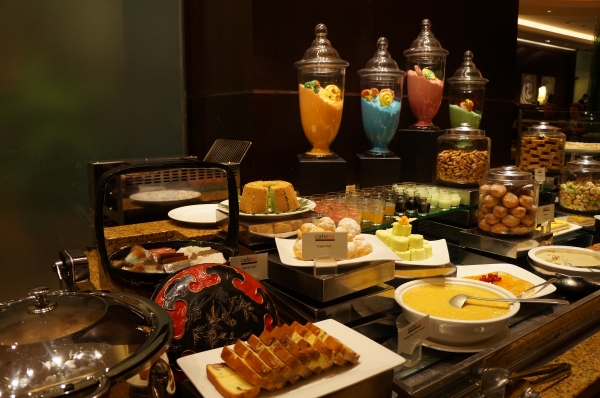 I’m not too sure about guys, but we all agreed that at least for the ladies, there will always be a separate compartment in our tummy for desserts! I was pretty satisfied with the dessert selection they had there, because y’know what, I could just go straight for desserts without eating mains. 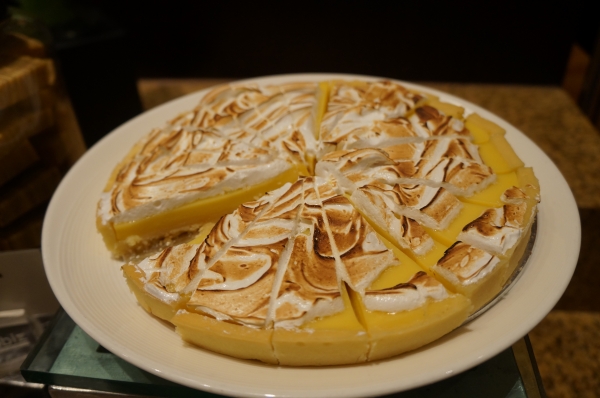 Marshmallow-thread sticks for the chocolate fondue, and wait, is that cream puffs I see? A first I’ve seen for fondues, actually. And that’s lemon meringue! 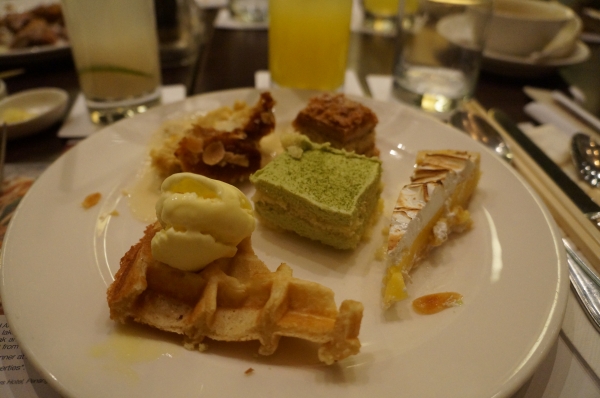 To say that this buffet had a spanking wide variety would be an understatement.

I like Penang food although I’m not a huge, insane fan. This buffet would be one that would be super worth it though – the Penang dishes were really tasty, and you still have your usual selection of international cuisine.

And you know you can always count on the Assam Laksa to reinvigorate your taste buds for the night, hee. I know I keep rambling on about it but oh, I just found out that it was ranked by CNN as 7th in its list of the world’s top 50 most delicious foods! I’m not alone. Trust me, it was good!