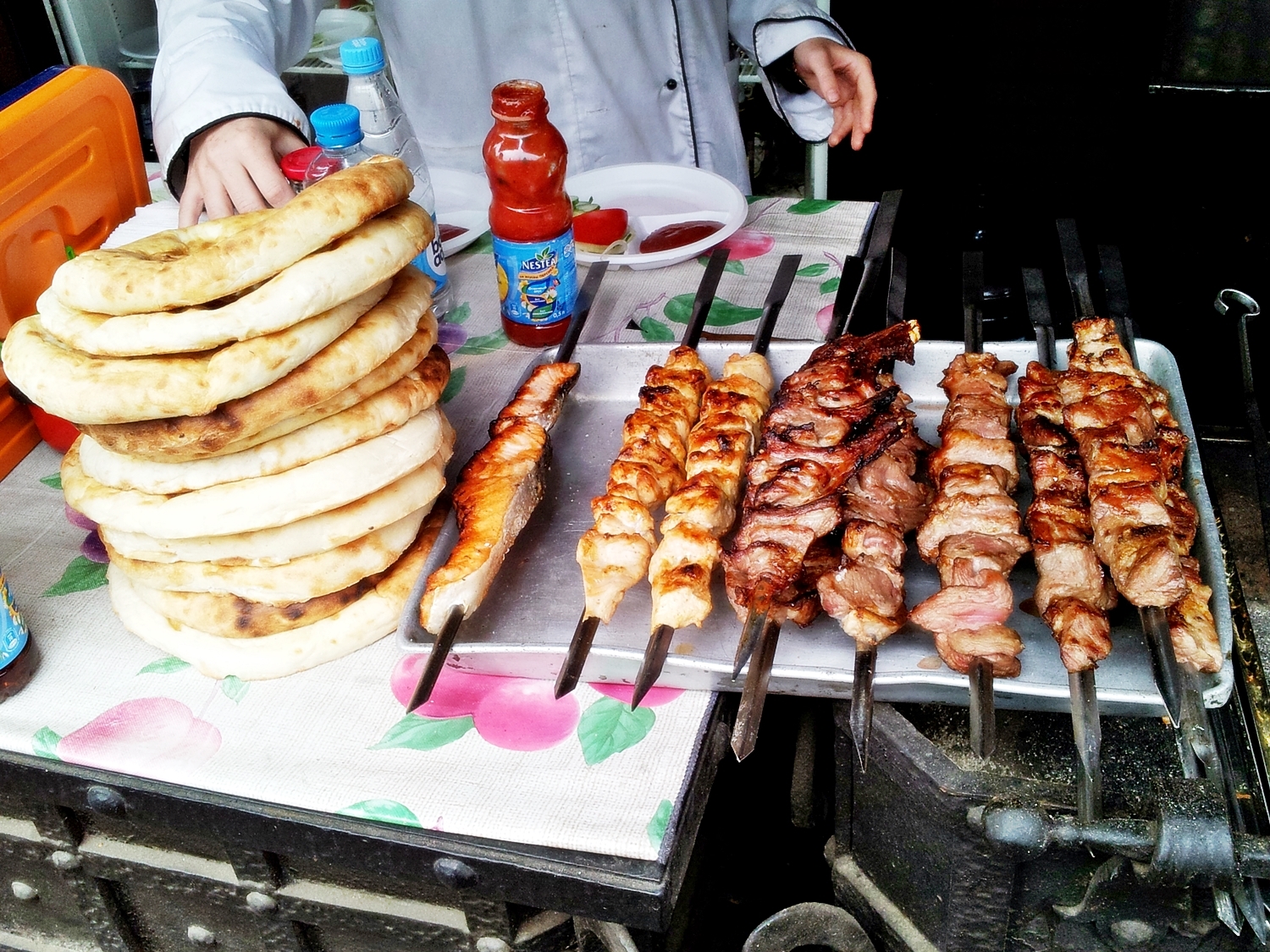 Moscow Street Food is diverse and multi-cultural, reflecting the vast expanse of land in Russia stretching from Europe to Asia. The harsh climate of Russia gave rise to simple, but often hearty food, made using whatever ingredients were in season. It also gave rise to foods that could be kept for long periods of time through salting, pickling, preserving, freezing or smoking. As the economic and cultural center of Russia, the city of Moscow has a vast array of traditional street food.

Food in Moscow can be found in food stands on the streets, kiosks within malls, in cafes, mid-range eateries or fine restaurants. Soups and salads play an intergral part in any meal, and are often served as starters / appetizers, followed by a main dish. On the flip side, desserts are rather uncommon. Ingredients that are commonly used include cabbage, trout, salmon, carrots, onions, cucumber, tomato, beetroot, beef, chicken, lemons, olives, sour cream, lamb, pike, carp, zander, potatoes, eggs, honey, sugar, butter, yellow turnip and grapes.

Snacking is common in Moscow, and various kiosks and food stands sell a wide variety of pastries throughout the day. The poor in Russia consume these pastries as meals itself. Alcohol, especially Vodka, is as common as water, and drinking is considered socially acceptable, a part of Russian culture. Not surprisingly, Russia has the highest alcohol consumption in Europe.

Baked Eggplant With Walnut Sauce is a Central Asia dish of thickly sliced eggplants / aubergines and tomatoes arranged in a stack, then baked with coriander, and garnished with crushed walnuts and lemon juice.

Alenka Chocolate is the most common chocolate in Russia and Moscow, having been in production as early as 1966. While it’s an ordinary milk chocolate bar, it stands out for the image of a young Soviet girl on the packaging, named Alenka / Elena, who eventually became a pop culture icon for prosperity and good times, as Russia saw great economic growth during the years this chocolate was released. Till today, the actual girl has yet to be identified, though many ladies have came forward claiming to be the girl in the image, and there are even rumors that the girl might be the daughter of Joseph Stalin.

Beer is plentiful in Russia, and readily available throughout Moscow. Khamovniki Unfiltered is a local, brewed in Moscow beer that has a deep amber colour, light malty taste and little bitterness. Pivo Shizune Vskoye (Shizune WCSS) is a Japanese style brew that is golden, but with a strong aftertaste. Beer Sibirskaya Korona (Siberian Crown) has a pale golden colour, light body, slight sweetness with no bitterness. Zolotaya Bochka Svetloye (Golden Barrel Light) has a golden colour, mild malty taste, and a clean dry finish.

Borscht is a popular Russia soup that uses beetroot or tomato as its main ingredient for the soup base, and may also include carrots, beef / pork, potatoes and garnished with sour cream and dill. Borscht can be served either hot or cold, although hot Borscht is more popular. Some variations include apples to sweeten the flavour.

Coulibiac is a popular Moscow pie that has a hard pastry shell, stuffed with salmon or sturgeon, white rice or buckwheat, hard-boiled eggs, mushrooms, onions, potatoes, cabbage and dill. Coulibiac is so popular that it has been adapted into French cuisine.

Adapted from neighbouring Hungary, the Russia Goulash Beef is a hearty soup / stew of beef, carrots, potatoes, salt, water, onions, tomatoes, celery, vinegar, pepper and paprika. Sometimes, other ingredients are added such as bell peppers / capsicum, bay leaves, parsnip, chili, cabbage or sour cream. Goulash Beef can either be served as a starter / appetizer, or as a one dish meal.

The traditional Russia Honey Cake is a layered sponge cake infused with honey and separated by layers of sour cream. Honey Cake is made with eggs, sugar, butter, honey, sour cream, baking soda, all purpose flour and water. Sometimes, vanilla, cream cheese or whipped cream is added to make it lighter or more flavourful.

Kvass is a non-alcoholic drink made from fermented rye bread, and is a traditional drink of Russia. The colour of the bread determines the eventual colour of the Kvass. Kvass is sold in the streets of Moscow, and it has even entered popular culture.

Pelmeni are Russian style dumplings, often consumed as a appetizer, though some may eat it as a main dish. The dough of the Pelmeni is made with flour and water, and it is stuffed with various fillings, such as salmon, beef, pork, lamb, trout, mushrooms, onions, cabbage or turnips. Unlike dumplings of other countries, Pelmeni always has a thin dough, a higher amount of filling to dough ratio, and is always savoury.

Pirozhki is a generic word that refers to any number of baked or fried stuffed buns in Russia. A Pirozhki can vary in shape, size, and variety of fillings. Some common savoury stuffings for a Pirozhki include beef, pork, chicken, salmon, trout, onions, potatoes, mushrooms, eggs, cabbage or cheese. Pirozhki is probably the most common and readily available street snack in Moscow, nearly every street corner has a kiosk or food stand that sells either the baked or fried version.

Besides being eaten plain, potatoes are often paired with cheese in Russia, to bulk up the meal. This combination of Potatoes And Cheese leads to a very heavy meal, and is typically served during lunch or dinner, never at breakfast.

Rassolnik is a traditional hot, thin body soup / broth, which contains pearl barley, beef / pork / chicken, pickled cucumbers, carrots, cabbage, onions, potatoes and salt. It is also known as Pickle Soup, and has a sourish taste, but is rather light in consistency. Rassolnik is said to be good for pregnant ladies.

Salad Beetroot is very common, sold in nearly every corner deli and served in almost all cafes and restaurants. Salad Beetroot is probably one of the top 5 most common salads in Russia, and is made with shredded beetroot, raisins, vinegar, shredded carrots and dill. Sometimes, Salad Beetroot is used an a garnish for some dishes, like Herring Under A Fur Coat.

The creamy Salad Crab And Potato is made with de-shelled crab meat, potatoes, diced carrots, peas, pickled cucumbers and mayonnaise.

Salad Olivier is an iconic Russia salad, made with diced potatoes, diced carrots, peas, hard boiled eggs, sliced ham / chicken, mayonnaise / sour cream and salt. Named after its creator Lucien Olivier, the Salad Olivier is commonly known worldwide as ‘Russian Salad’. It is the most popular salad in Moscow, and is traditionally served at all celebrations in Russia, especially during the New Year.

Salmon is one of the most common and readily available fish in Moscow. Salmon Baked consists of a salmon fillet, baked with olives, bell peppers / capsicum, salt and parsley.

Sourdough bread is also quite common in Moscow, and a canape such as Salmon Smoked And Cucumber On Sourdough Bread is sometimes served as a starter or light bite.

Shashlik, or Shashlyk, are skewers of meat, fish, or vegetables, grilled over a charcoal fire. Shashlik is usually marinated in a vinegar along with herbs and some spices, unlike other forms of skewered meats from other countries. Ingredients for Shashlik may include lamb, beef, pork, chicken, mutton, salmon, trout, mushrooms, bell peppers / capsicum, onions, tomato and cucumbers.

Shchi is a traditional soup with cabbage as the base, along with mushrooms, onions, garlic, carrots, bell peppers / capsicum, parsley and beef / pork / chicken / lamb. Sour cream is added as a garnish before serving. Shchi is distinctive for its sour taste and light body, and is considered a poor person’s / farm meal.

Sorrel Soup is a simple but rather uncommon soup in Moscow, made with sorrel leaves, water and salt. Sorrel Soup can be served either hot, or cold, and often include various other ingredients to bulk up the soup such as potatoes, beef, hard boiled eggs, carrots or parsley.

Trout is one of the most commonly consumed fish in Russia, due to its wide availability. Trout Salted is one of the more common means of preserving the fish for a long cold winter.

Vodka is a fermented distilled beverage, consisting of mostly water and ethanol with some flavourings or impurities, an alcohol content of around 40%. Vodka is considered the drink of choice of many people in Russia, and accounts for about 70% of all alcohol consumed. Along with the Russian culture of drinking being socially acceptable, this means Vodka is readily available anywhere in Moscow, and supermarkets have dedicated sections with over 50 different brands of Vodka.

Zander Fish is a freshwater fish with firm white flesh, few bones, and delicate flavour. This makes it highly sought after as a food source, and Zander Fish features on many restaurants menus, such as this Zander Fish Cutlet Stuffed With Crab, Mashed Potato With Cheddar Cheese, Asparagus In Creamy Seafood Sauce.

Top 5 Moscow Attractions
Things To Do In Penang