Halloween fun for everyone at Universal Studios Singapore 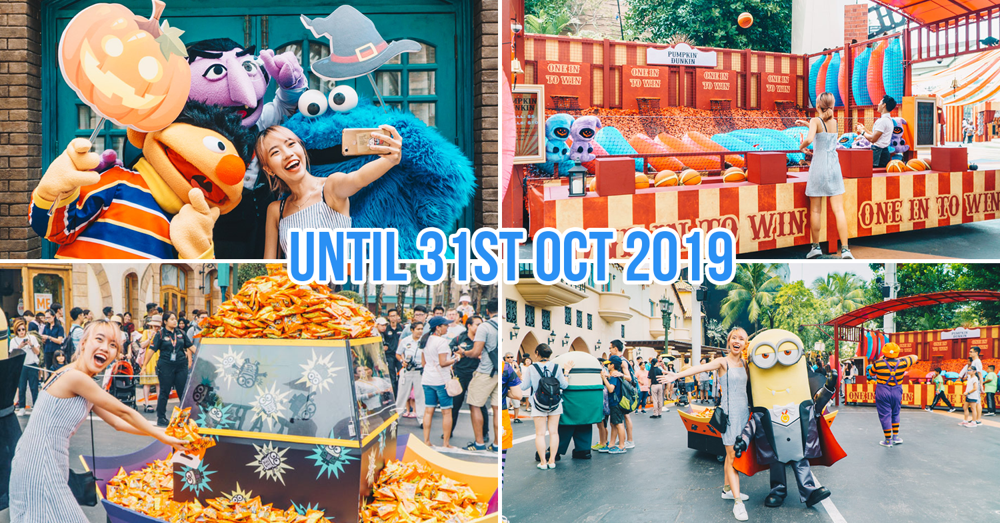 Instead of scary ghouls, this daytime event allows you to bask in the festivity in a family-friendly way. From now till 31st October 2019, expect free treats, Minions Monsters and photo ops with The Count from Sesame Street. All you need is your regular Universal Studios Singapore admission ticket!

Here are the key experiences to look out for:

Halloween just isn’t complete without treats and thankfully for us, there’s Minion Monsters Tricky Treats, a mini-parade featuring a push-float filled with free packets of biscuits for everyone. 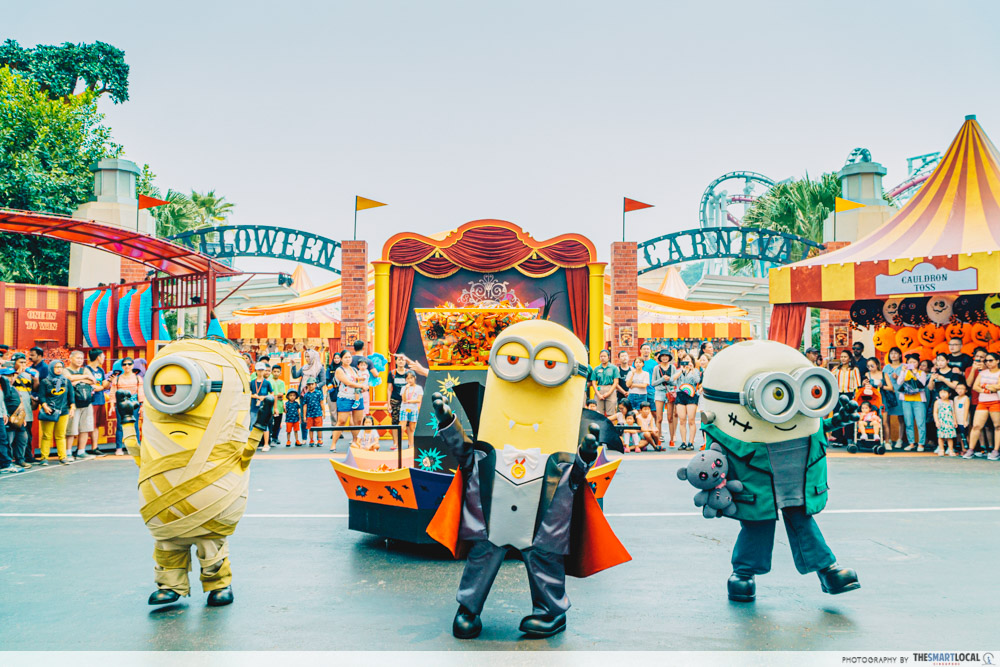 If your kids love the adorable Minions from Despicable Me, make sure to go early to chope a space at the front to watch the Minion Monsters – Dracula Kevin, Frankenbob and Mummy Stuart – dance along to pop songs. 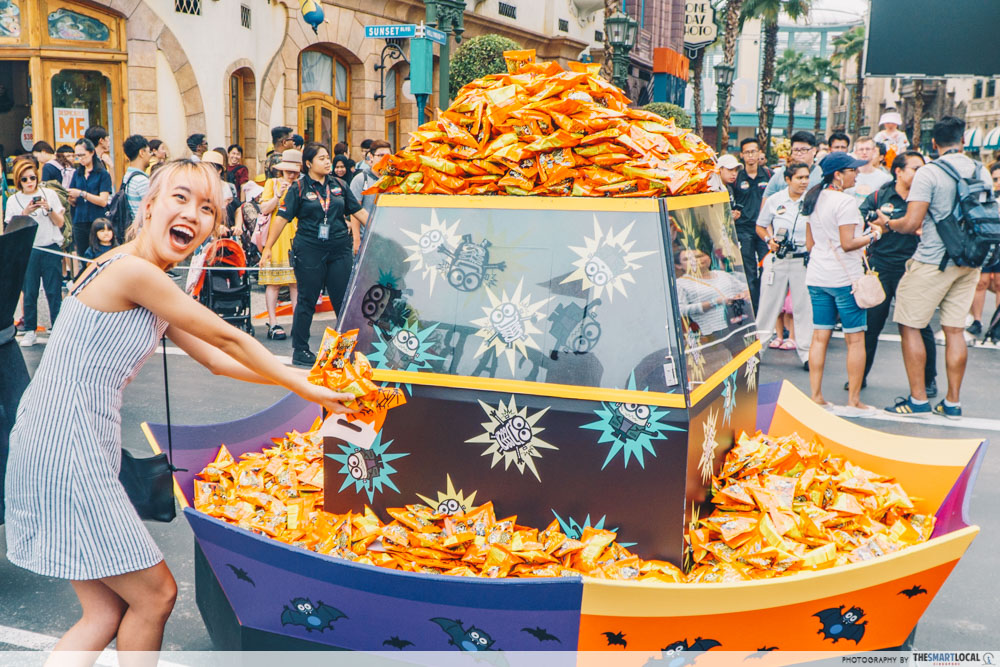 The climax of the performance is right at the end of the show, where a huge pile of chocolate-filled biscuits will be released from the float. Everyone will be able to get a pack or two after snapping a picture with your favourite Minion Monster! 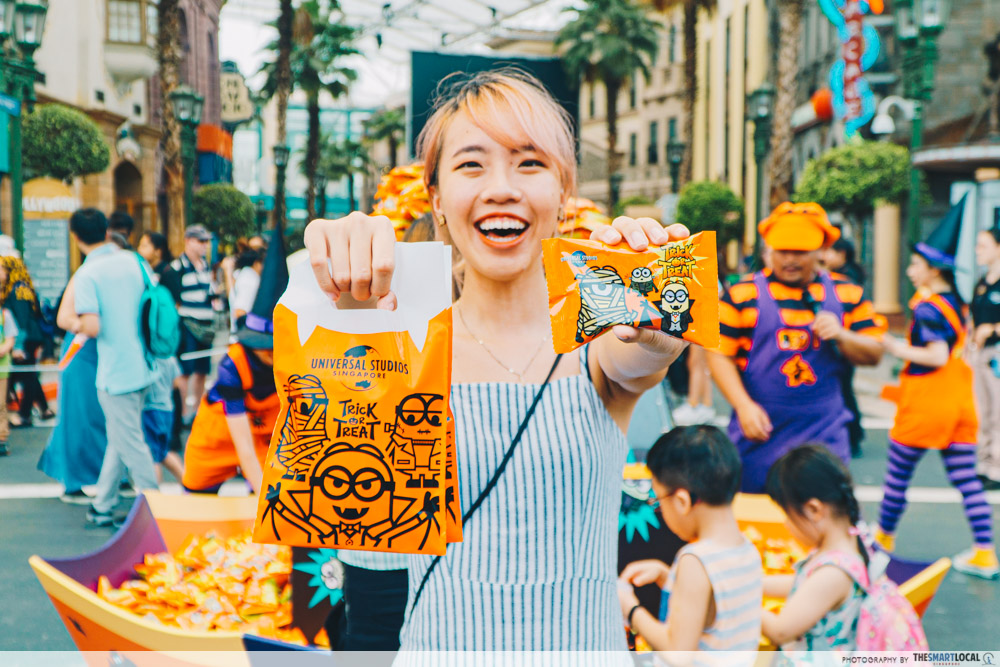 In addition to the usual Sesame Street Meet and Greet characters, this Halloween version features Count von Count and other characters either donned up in Halloween costumes or hand props. 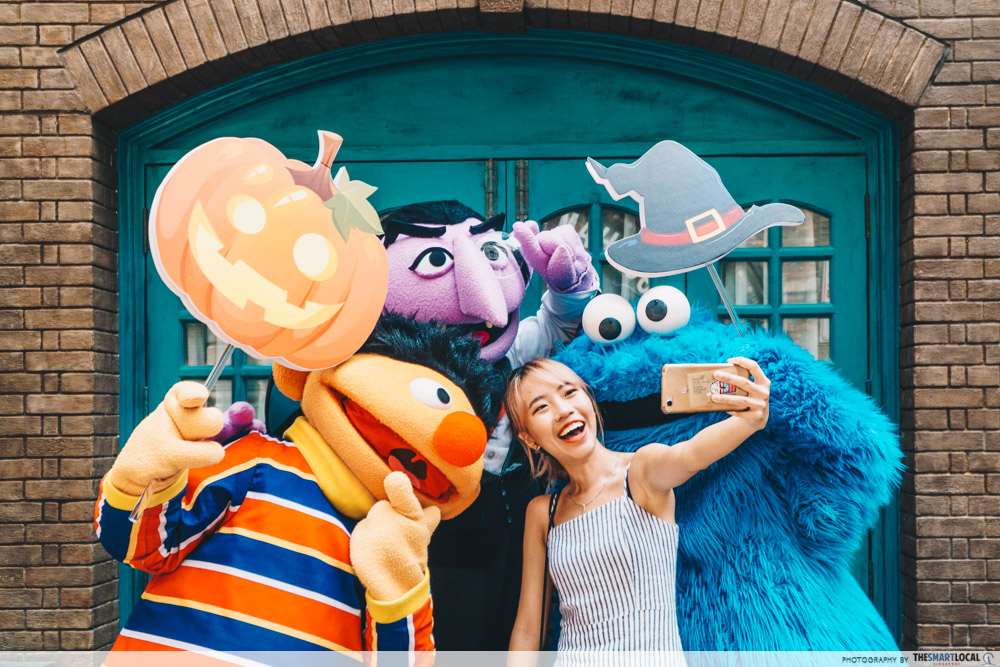 Count von Count only makes a special appearance from now till the end of October!

For those who have met these characters in Universal Studios Singapore, you’d know each one of them has a distinct personality. Ernie is friendly, Cookie Monster is feisty and the Count… well, he counts everything. 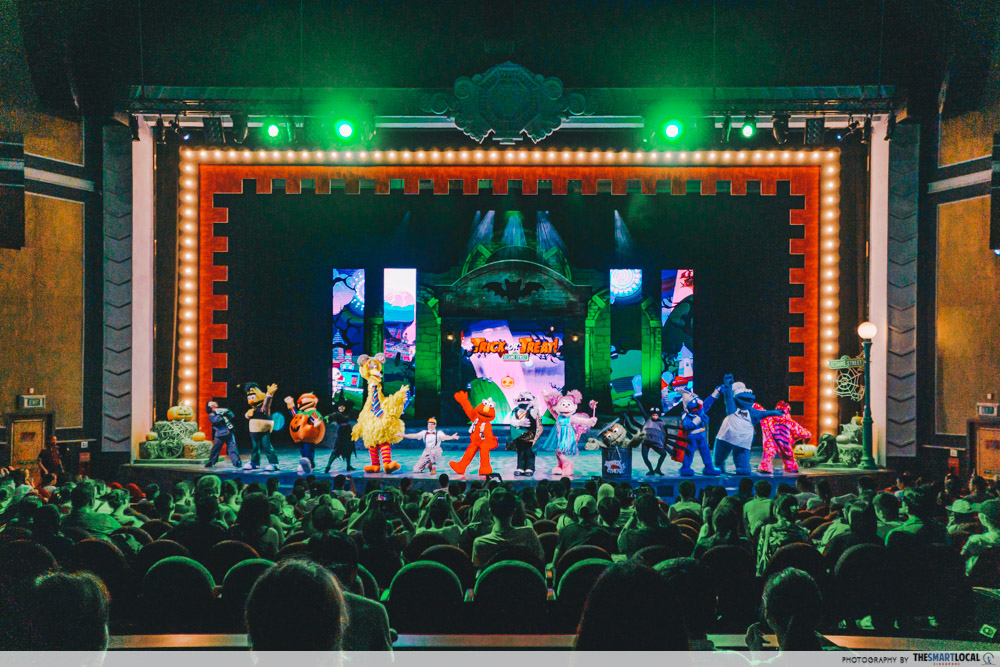 For a groovy musical to dazzle up your visit, make sure to pop by the Trick or Treat with Sesame Street Show at the Pantages Theater in the Hollywood Zone. 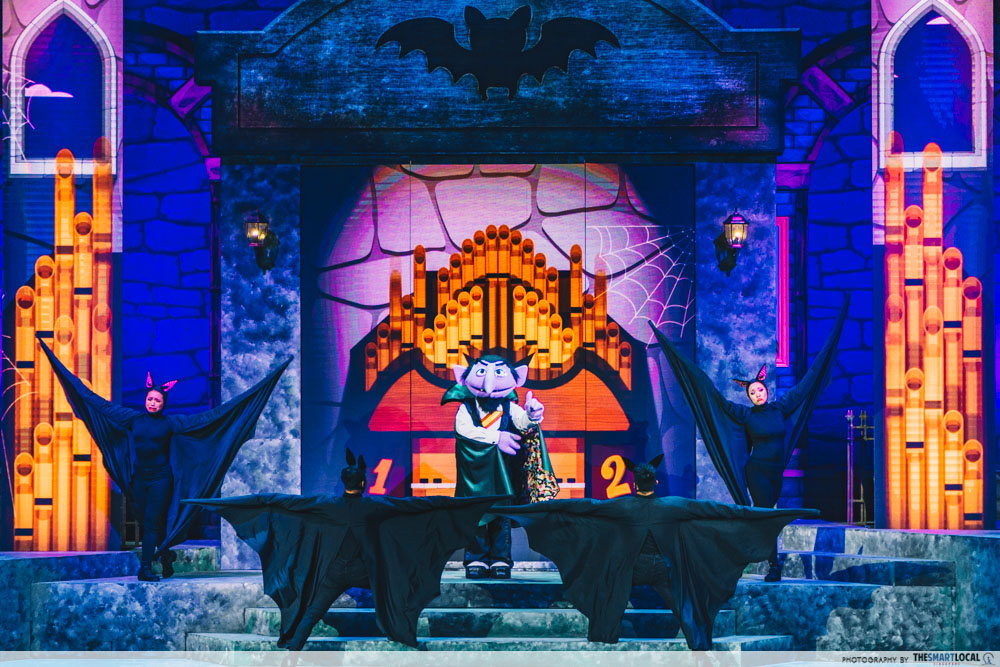 Starring Count von Count, this wholesome musical performance is all about friendship and sharing during Halloween. The show is sprinkled with groovy music, high-energy dance performances and an easy storyline that kids are bound to love. Even as an adult, I found the theatrics engaging all the way until the curtains fell.

Win prizes at the Halloween Carnival 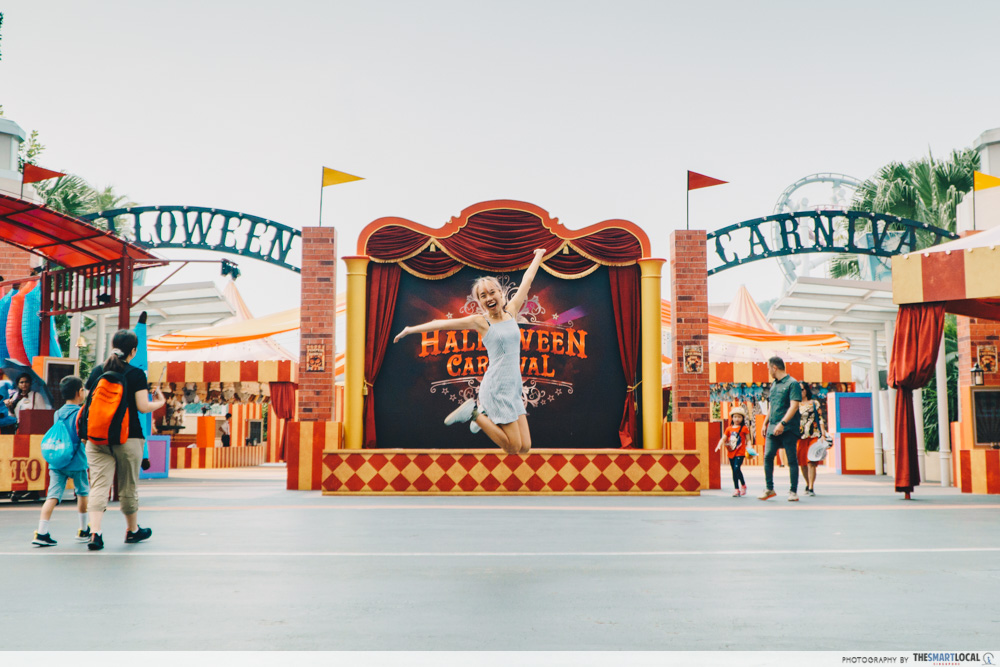 Between zooming around on Battlestar Galactica: HUMAN vs. CYLON and the Revenge Of The Mummy, head to the Halloween Carnival for a different kind of adrenaline rush. 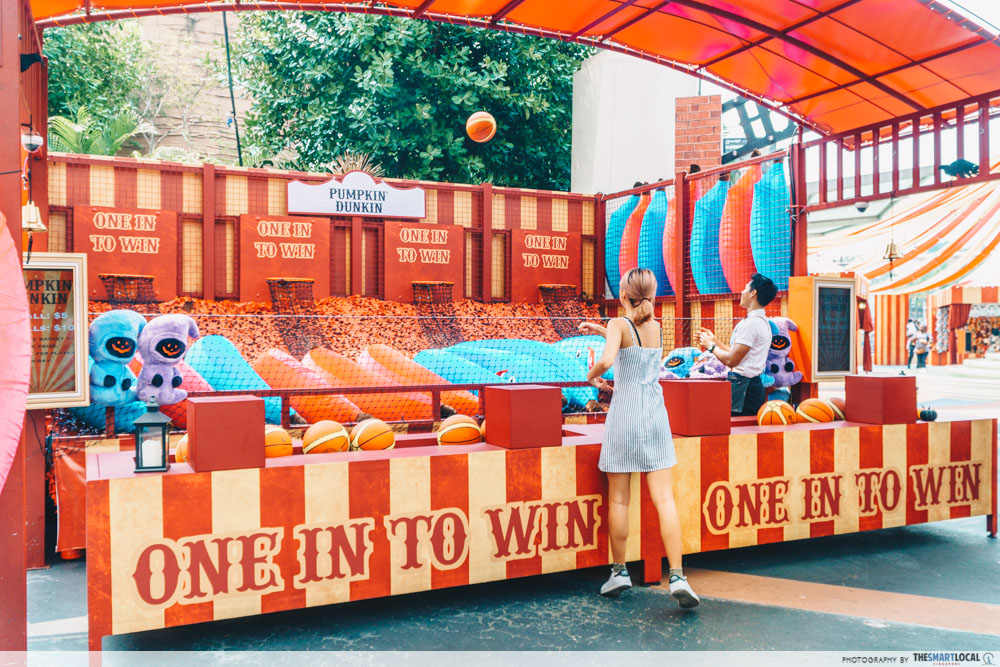 A brand new addition to the park this Halloween, this carnival has 5 classic games priced from $5 per round such as the Pumpkin Dunkin and Cauldron Toss. 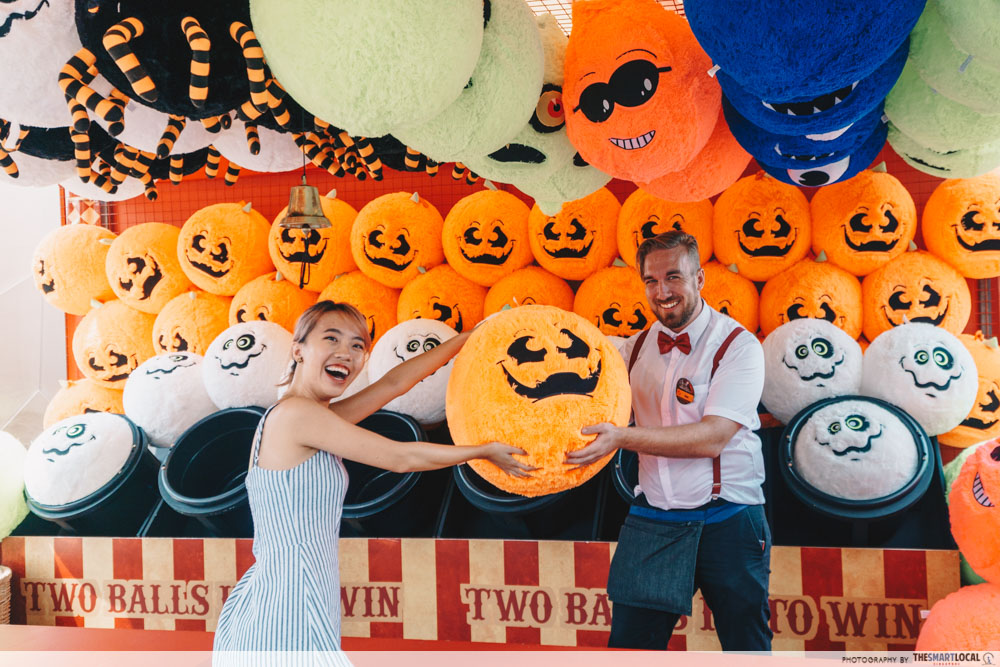 For those who don’t want to lug your loot all around the park, you can request to have the staff at the game booth keep your prizes safe for you until the end of the day.

Spend a family-friendly day at Universal Studios Singapore this Halloween 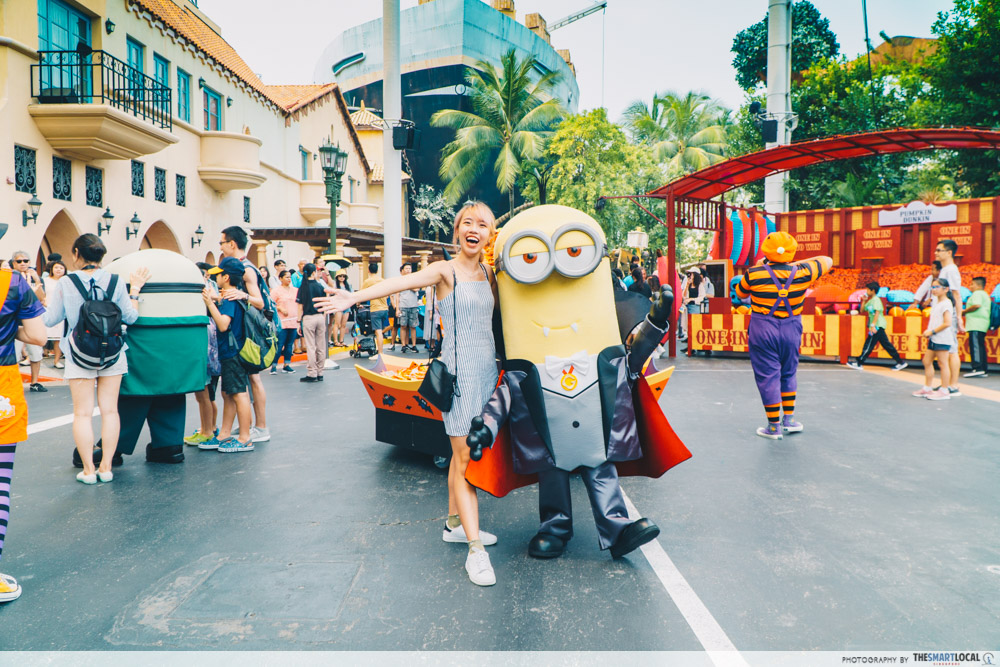 Halloween doesn’t always have to be scary to be festive, so spice up your usual celebrations this year by heading to Universal Studios Singapore. And if reading this has got your itching to get your hands on tickets, here’s a tip: buy your tickets online to enjoy them at a discounted price of S$69* for an Adult One-Day Ticket (U.P. S$79)! 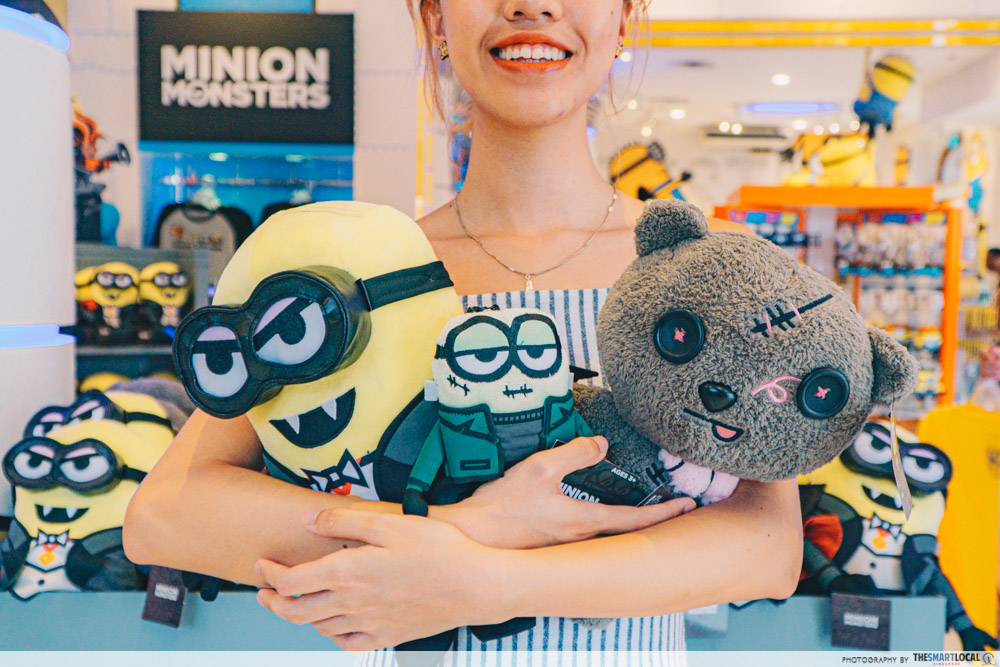 On top of the Halloween-themed activities, there is also themed merchandise for you to collect while you are there. 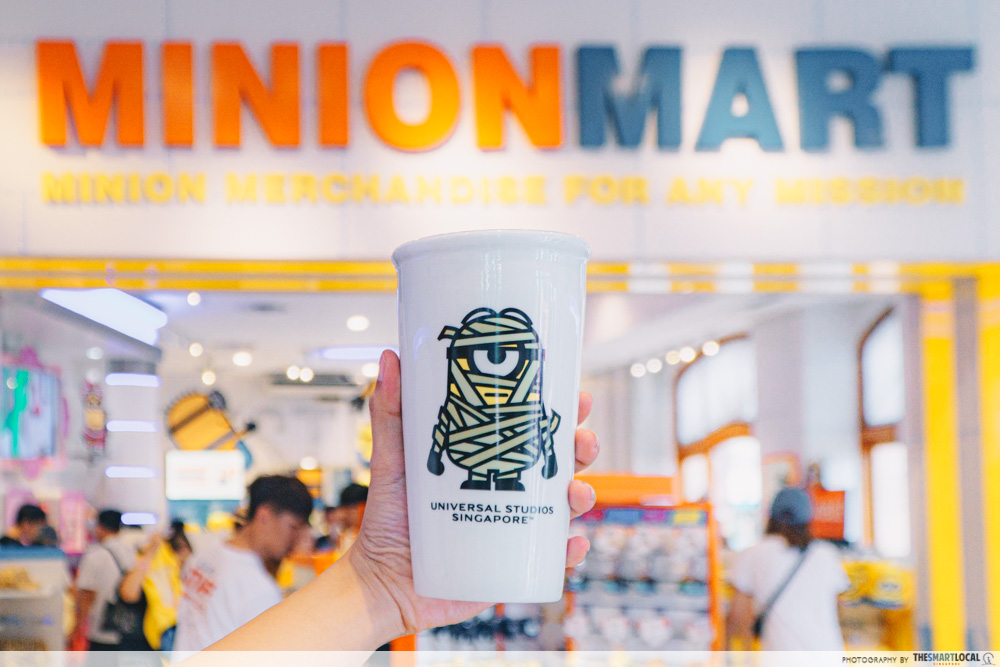 Your entrance ticket will also unlock other great discounts such as 50% off this Minion Monsters mug ($10, U.P. $20) while stocks last, and a storewide 10% off all retail merch!

Find out more about Halloween Fun For Everyone here

This post was brought to you by Universal Studios Singapore and Resorts World Sentosa.
Photography by Lery Villanueva. 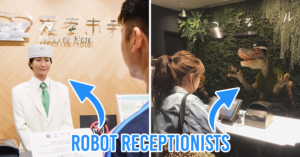 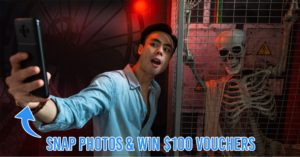