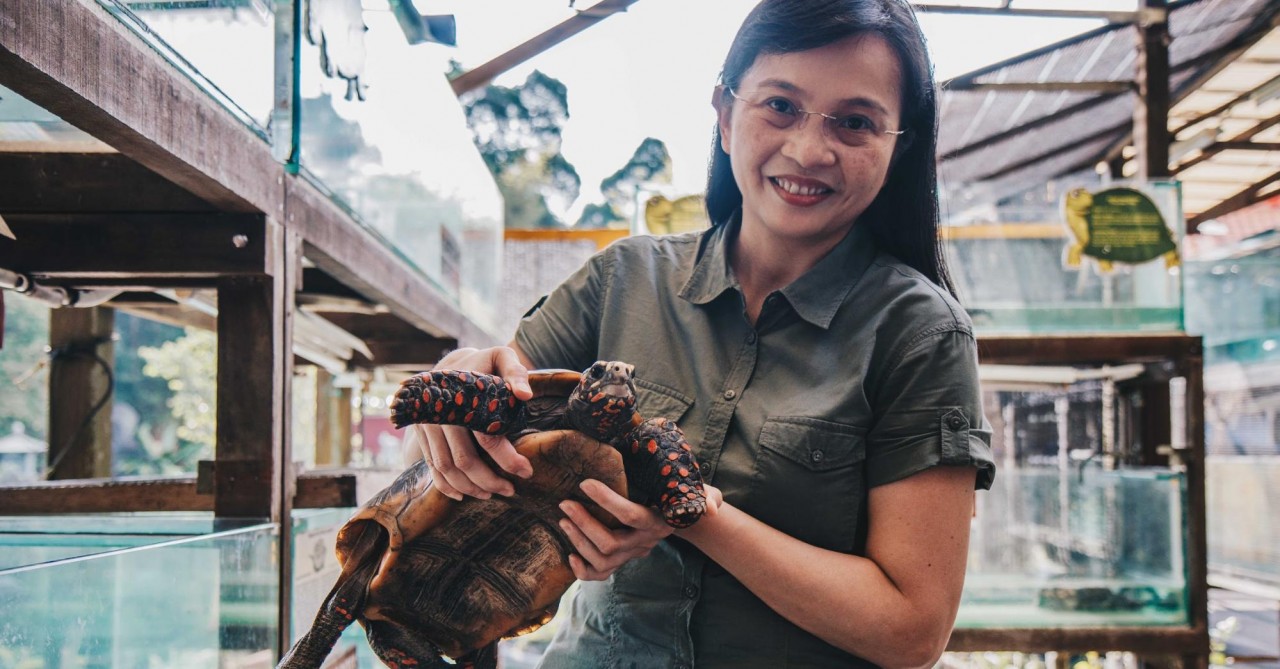 Singapore’s Chinese Garden is known for its imperial styled pagodas and arch building, but within all that beauty lies another: Singapore’s very own Live Turtle & Tortoise Museum.

A Guiness World Record Holder, the museum holds over 500 turtles and tortoises from 40 different species, ranging from the most dangerous alligator snapping turtle to the world’s 2nd largest tortoise species, the Giant Aldabra. All this is run by Connie Tan and a handful of workers, as part of her family’s legacy.

Unfortunately, this marvel may soon no longer be – the museum is scheduled to be evicted from Chinese Gardens by 31st March. We headed down to understand what drives Connie to keep this museum alive against all odds.

A look around the museum grounds These Sulcata Tortoises are the 3rd largest species of tortoises in the world.

Unlike at the typical zoo, the museum had its animals roaming free. Terrapins basked in the sun, while Sulcata Tortoises grazed on grass. With this open concept, children can run around freely, and visitors can approach the animals if they wish to. And that is exactly what Connie and her father wanted to achieve when first they started this museum. 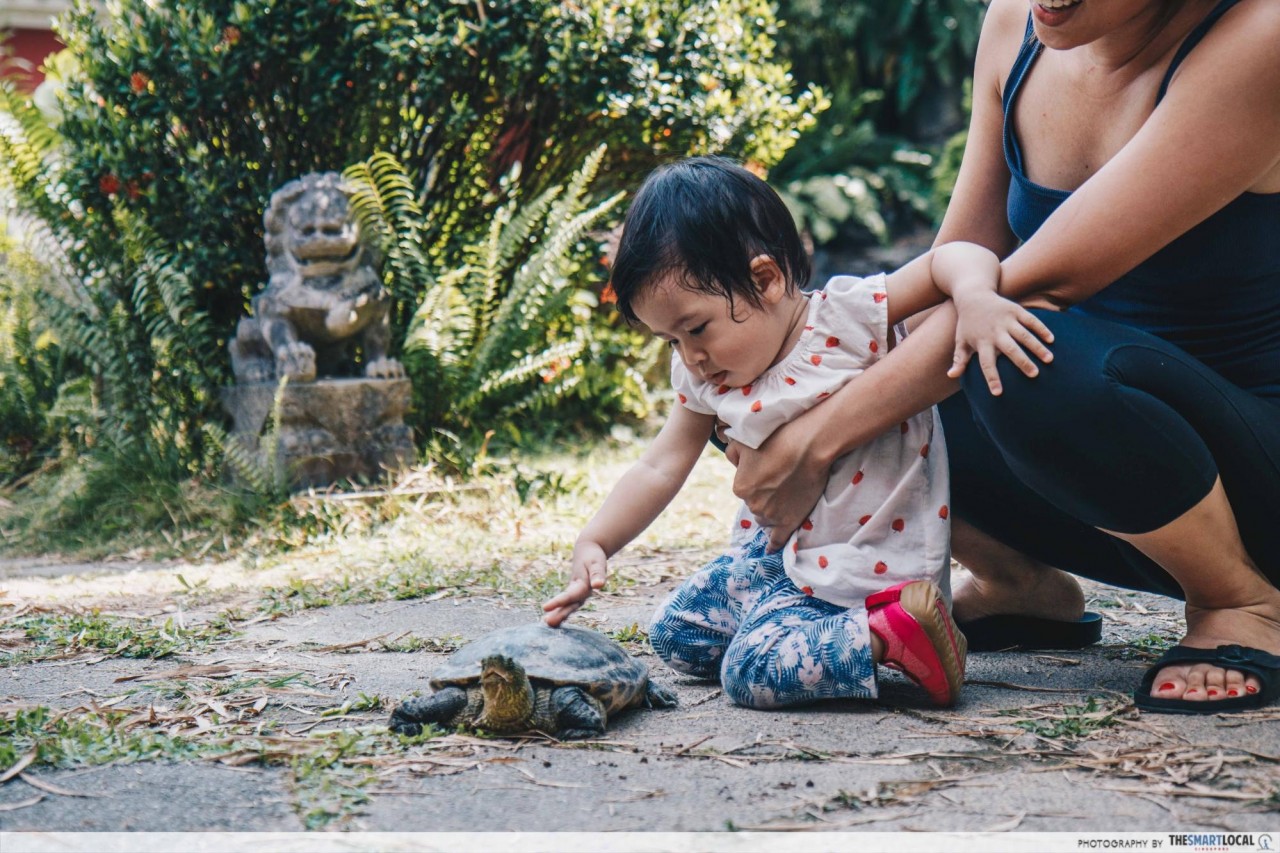 “We wanted to create a place where kids could get close to these terrapins and turtles, the same way my son and I played with them when we were young,” Connie explains.

She reminisced about how her son used to taunt the tortoises with food, not caring that they may possibly bite him. Indeed, the children around us showed the same carefree attitude.

“Where else can you find a place where you can feel the difference between a turtle, terrapin and tortoise? In zoos, you get to see these animals but you don’t get to touch them because they’re behind glass walls.” That’s why she’s been hesitant to get investors, or be a part of the zoo – she fears that it will remove the essence of the place. So instead of picking the easy route out, she’s been spending the last few years fighting.

“I’ve been asking stat boards to give me a cheap place,” she sighs. “Once we get a cheap place, we can continue keeping the entrance fees low so that parents won’t feel like it’s too expensive to let their kids enjoy.”

Since her museum opened back in 2001, Connie hasn’t raised the entrance fees despite inflation over the years. Children can enter for $3, and adults for $5.

“I didn’t want to be running as a business where everyone has to pay a high price to enjoy what  was free to me.” Connie with Xiao Hei, an Aldabra.

But with her goodwill comes a problem – the museum has gone into the red for a couple of months, and she lacks the savings needed to rent a new place.

With insufficient funds to rehome the animals, Connie had no choice but to close her 60 year old events management business in order to temporarily house them. It may seem like a tough decision to make, but for Connie the option between the two had always be obvious.

“These are lives,” she remarks. “Can I kill them? Or can I kill a non-living business? It’s not a choice, it’s a must do.” 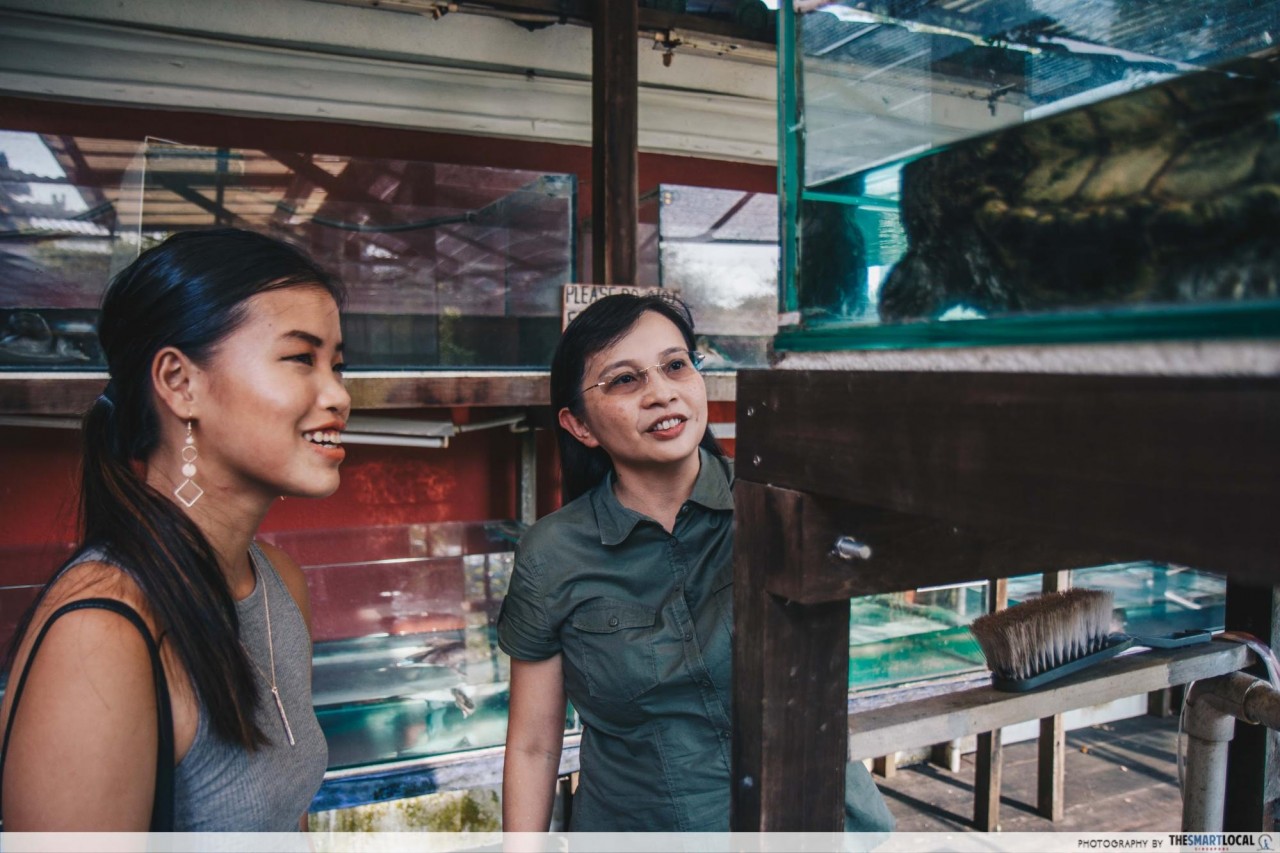 With the lease expiring and nowhere to go, Connie turned to Facebook in desperation for help with an open letter to PM Lee.

“I ran out of options,” she explains. “I didn’t just start looking, I’ve been looking for a few years already. And each time the responses I got were really terrible.”

Agencies have proposed a move to Kusu Island, and even Malaysia, where the land is cheaper.

“It’s a very silly idea, because this belongs to Singapore. I’m trying very hard to stay.” 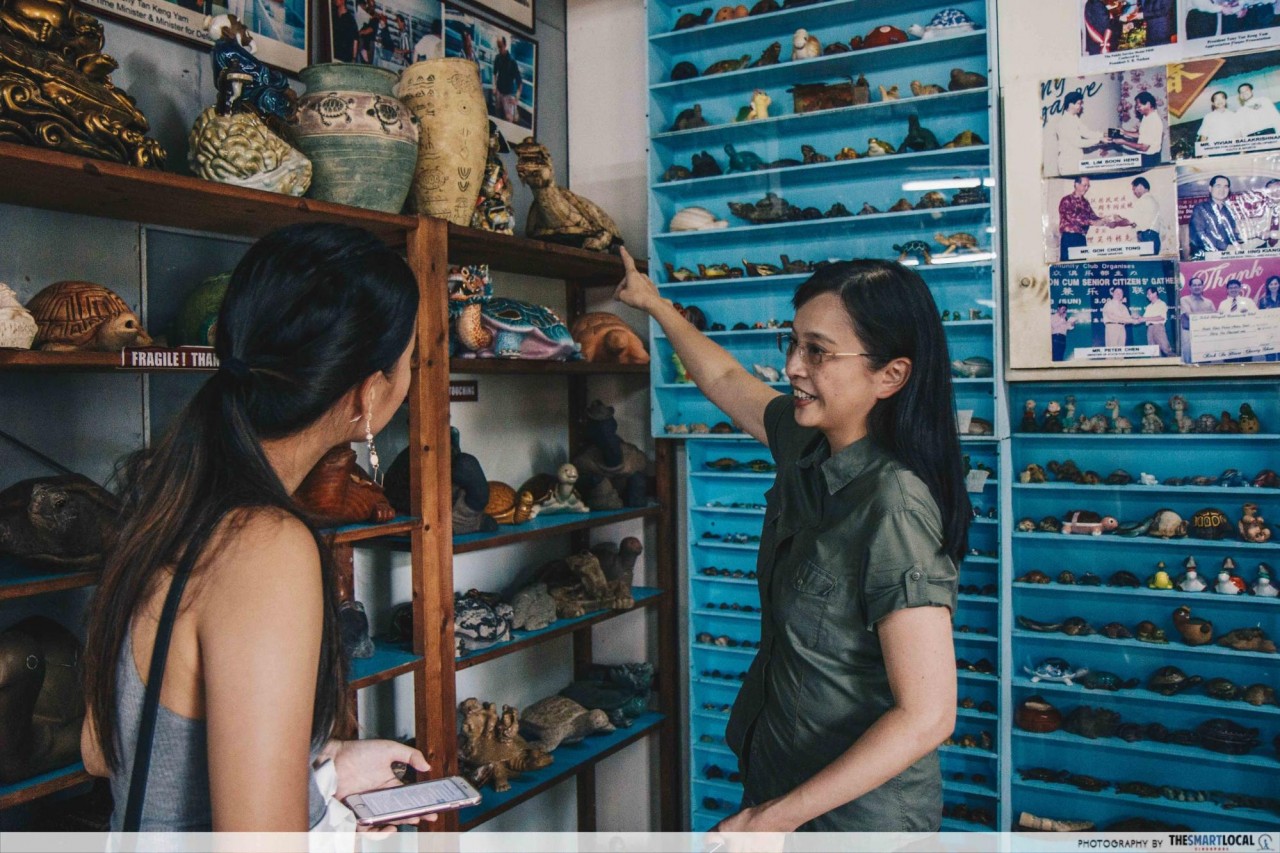 Her letter has since gained a ton of public attention and support. With a surge in donations and people even offering up their places to temporarily house the animals, Connie has been left speechless by the tremendous response.

All she hopes for? The public’s continuous support.

“I can’t afford to pay for a whole facility myself, so I’ll most likely have to share the place with someone else and there needs to be money earned. I think by just adding a dollar or two more in the entrance fee may just well cover everything on my side.”

But she still aims to keep the prices low – especially for children.

“If you can speak a Mandarin paragraph to me, you may even go in for free,” she laughs. 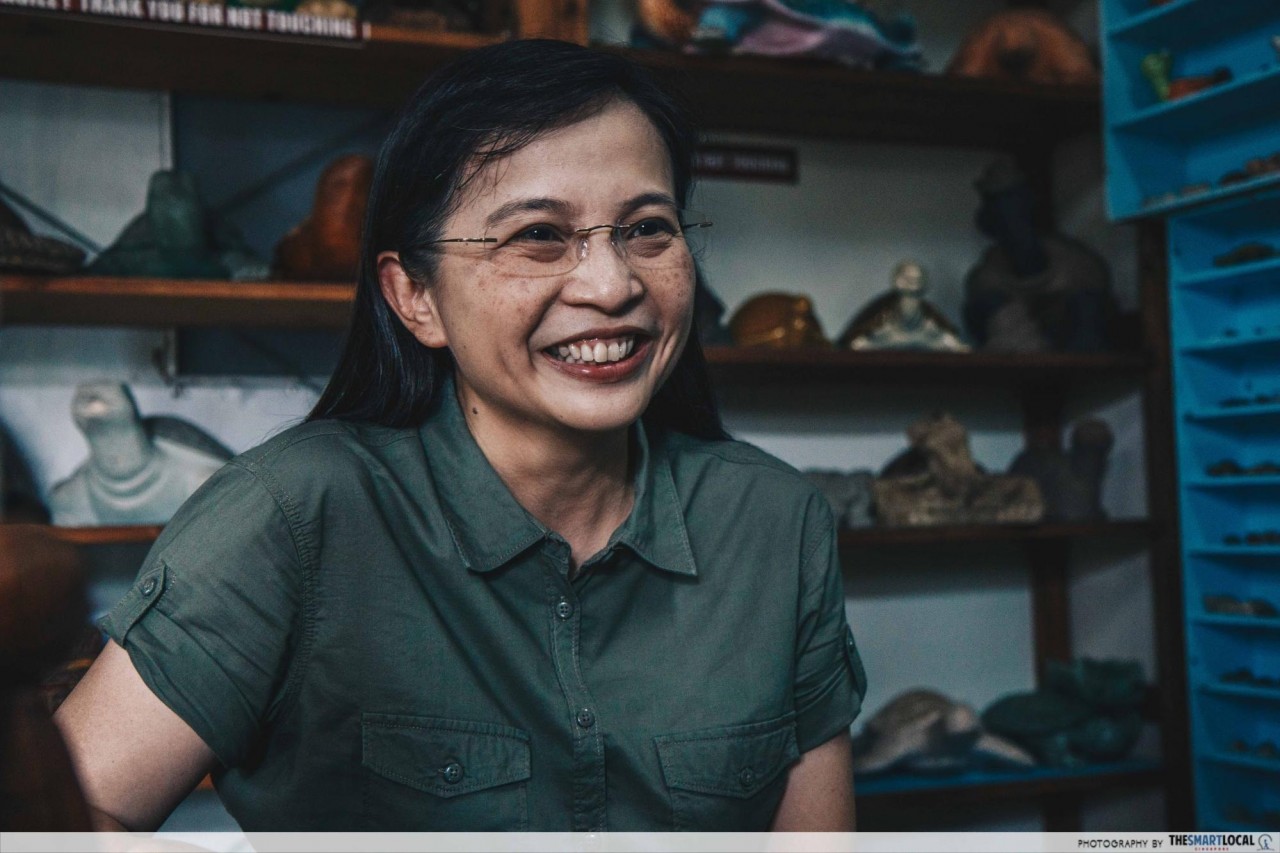 As for the future of the museum, Connie hopes that she may someday expand its concept overseas.

“I know it’s a bit ambitious but every country has their own different species of turtles and tortoises and I would like the kids of these countries to know about the native species.”

Keeping the Live Turtle and Tortoise Museum in Singapore alive 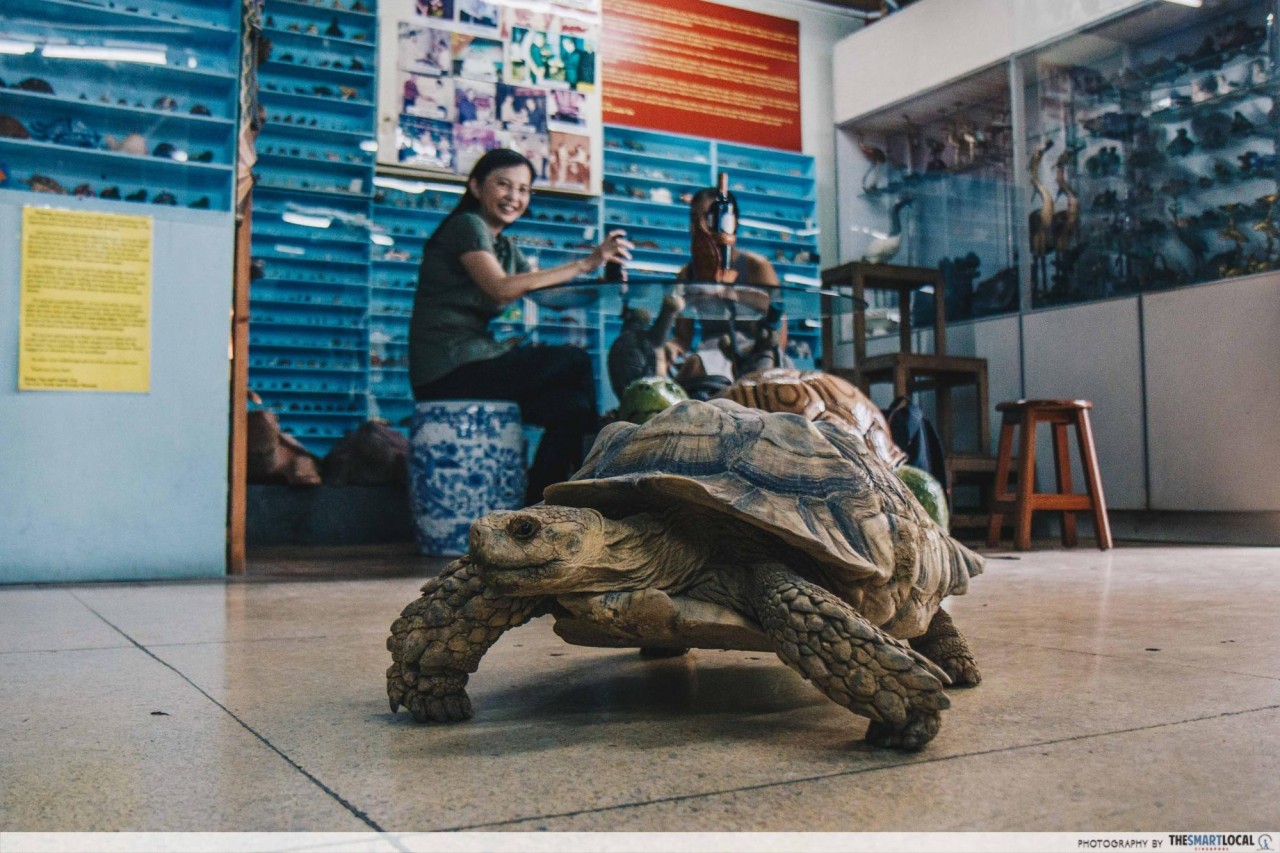 But there’s still a possibility that all those dreams of the future may never happen. There’s no guarantee that Connie may find a new piece of land for the animals in Singapore – for all we know she may need to relocate to Malaysia or Myanmar, or worse still, have her turtles and tortoises taken away from her.

The Live Turtle and Tortoise Museum may cease to be by 31 March. If that happens, not only will Connie lose her three-generation legacy, Singapore too will lose an integral part of our heritage.

However, there’s still hope. You can help them find a new home by contributing to their crowdfunding campaign where all proceeds will go into rebuilding a home for the turtles. Together, we can build a future for this museum.

9 Restaurants & Cafes On Singapore's Furthest Edges To Siam The 6 Million People In Town
9 Rustic Things To Do In Niigata - A Prefecture 3 Hours From Tokyo For...