Being an Eastie, the only time you’d see me at Upper Thomson is if a friend has lured me out for a post-hike cafe-hopping adventure. Besides having a plethora of eateries, the area has several nature parks peppered around its vicinity. One such spot is Thomson Nature Park.

The park isn’t just home to scenic walking trails too – its pièce de résistance is a now-abandoned Hainan Village that hikers will be able to explore. From the ruins to interesting wildlife, here’s what you can expect to see at Thomson Nature Park.

Other parks and trails in Singapore:

Finding the ruins of the Hainan Village 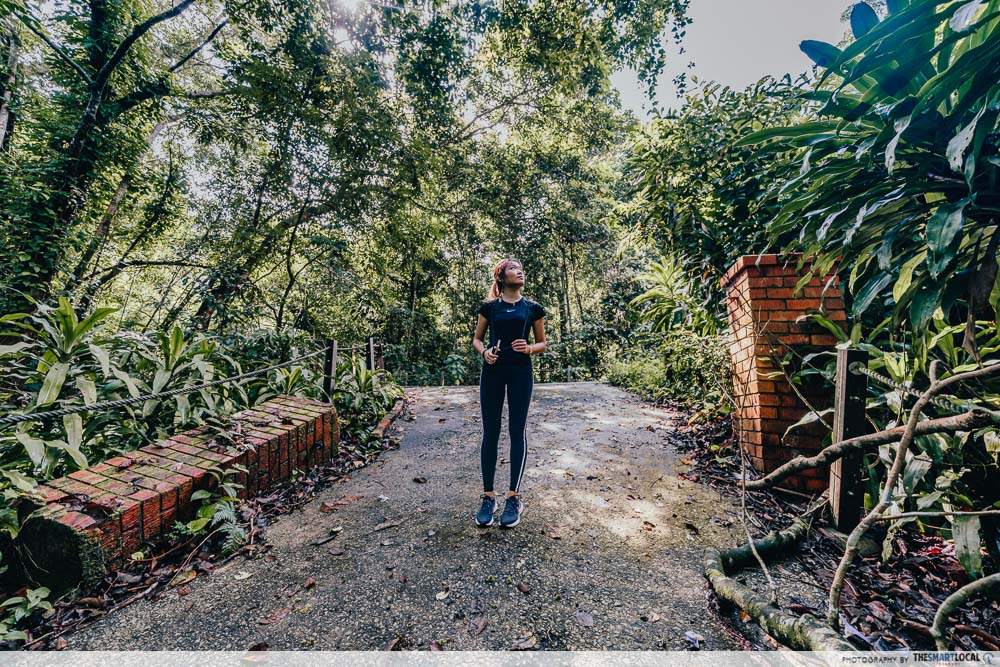 The thought of exploring an abandoned site usually comes with imagining it happening Indiana Jones-style – think bushwhacking and poring over a map for hours. You won’t need to do any of that here – the ruins at Thomson Nature Park aren’t “hidden” by any means; in fact, it’s a significant feature of the nature trails here. 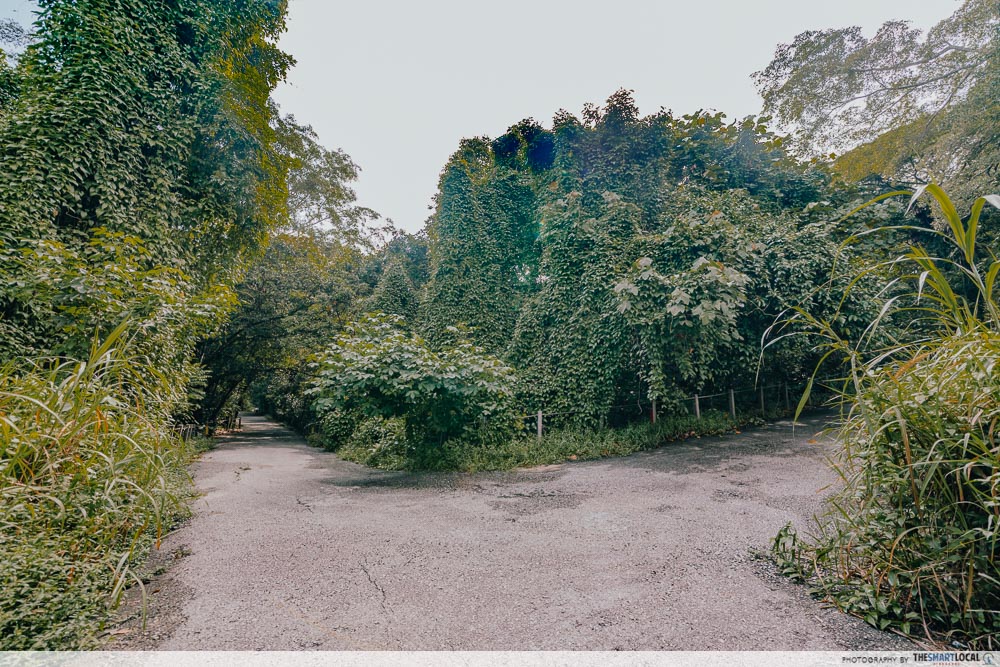 There are two main paths you can take from the main entrance: the Ruins & Figs Trail (1.5km) on the left, or the Stream & Ferns Trail (1.4km) on the right. Picking the one to take is a no brainer – the former will lead you straight to the Hainan Village’s ruins.

If you’re a nature lover hoping to spot some of the park’s unique fauna, take the latter route and be treated to a variety of biodiversity along the way. 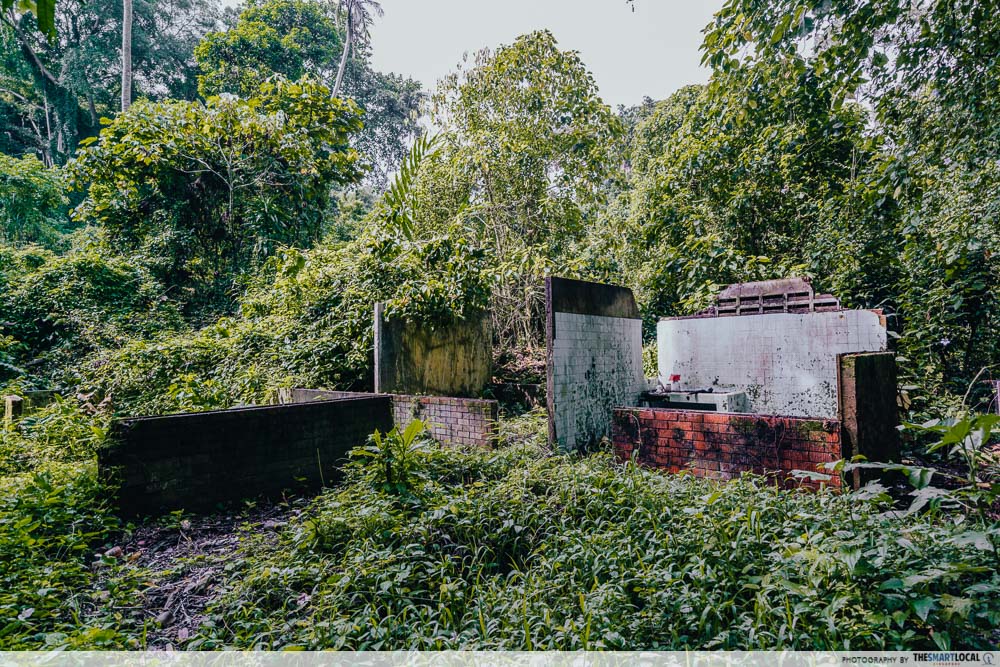 The Ruins & Figs path is marked in red, so just follow it and you’ll soon find yourself amid some remnants of the village.

Here’s some History 101: Thomson Nature Park was once home to a Hainanese settlement in the 1930s when immigrants from Hainan came to Singapore. 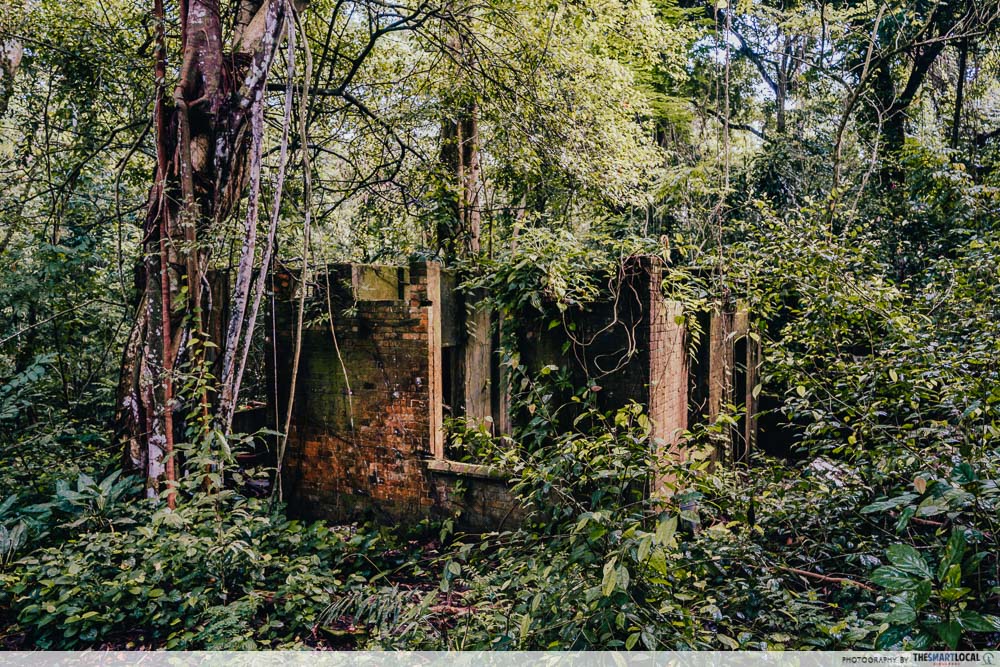 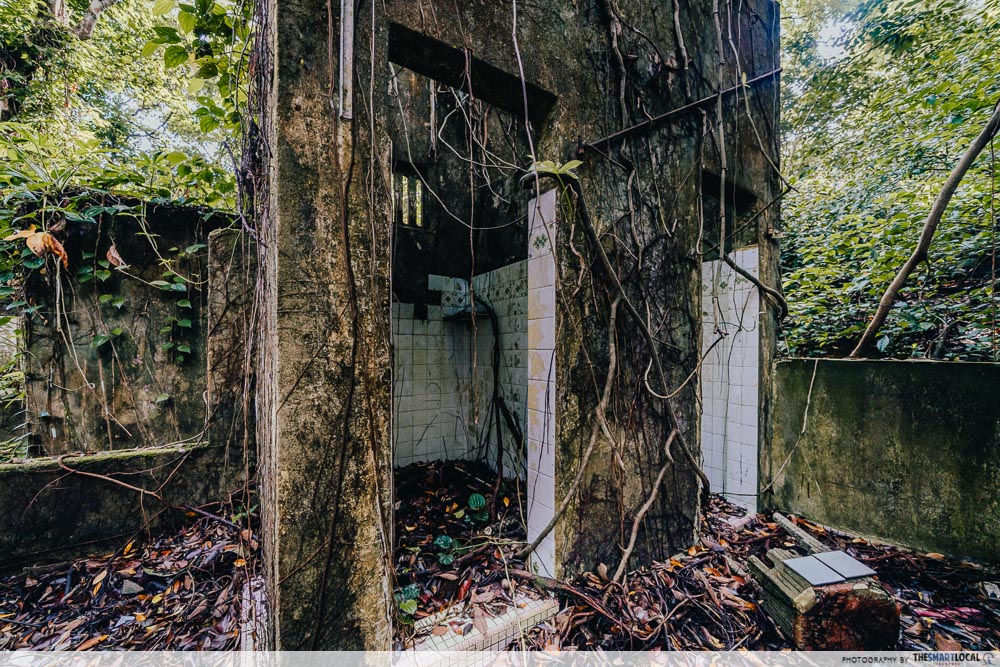 Over the years, the kampung saw fruit plantations and farms, with villagers keeping chickens and pigs to sustain themselves. In the 1960s, residents included Malay, and Eurasian families as well as immigrants of other dialects like Hokkien and Teochew. 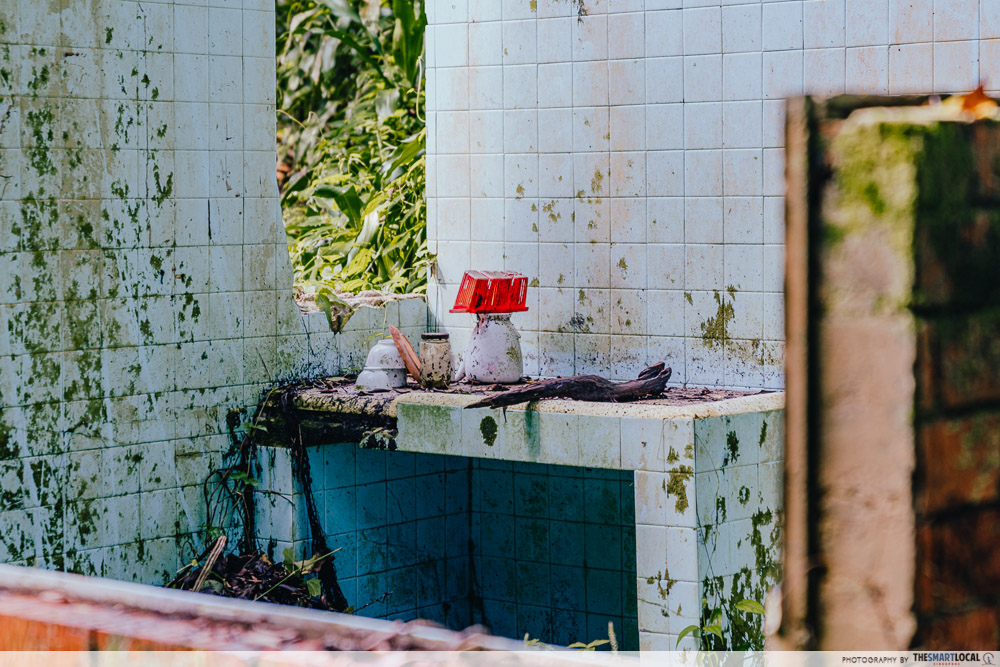 We spotted what seems to be an old toilet or kitchen – the tiles are surprisingly in better condition than we imagined.

As Singapore continued to develop with all sorts of housing advances, the village was eventually abandoned in the 1980s. However, many of the original structures still remain – though current residents are way furrier than the ones from almost a century ago. 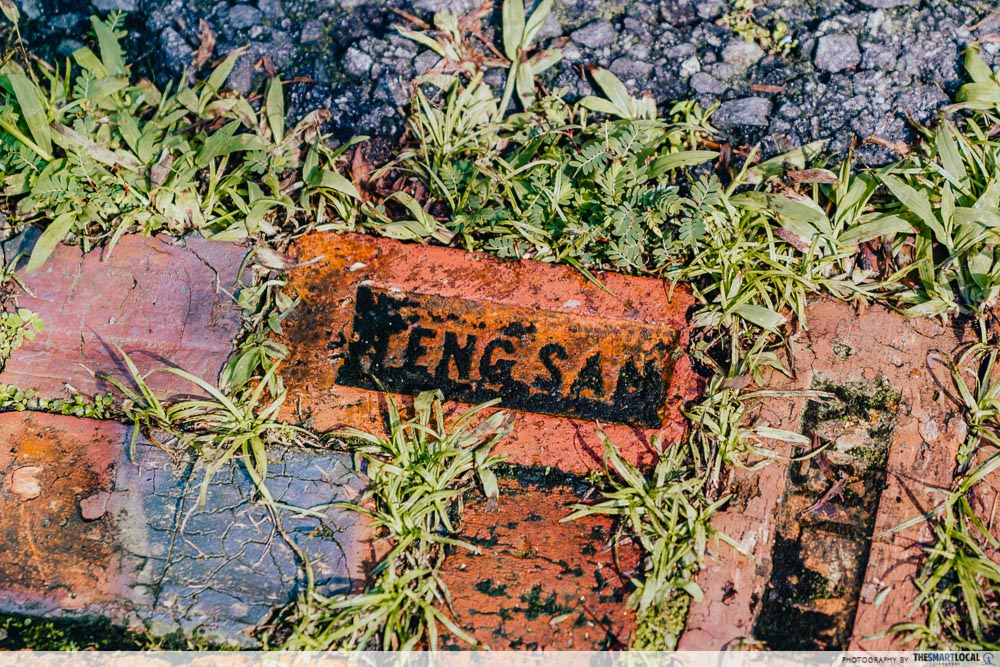 During the walk, we saw the remains of what once were homes, toilets, and even fences and a well. Around the area were also bricks with names engraved on them, which we assume belong to the former villagers. 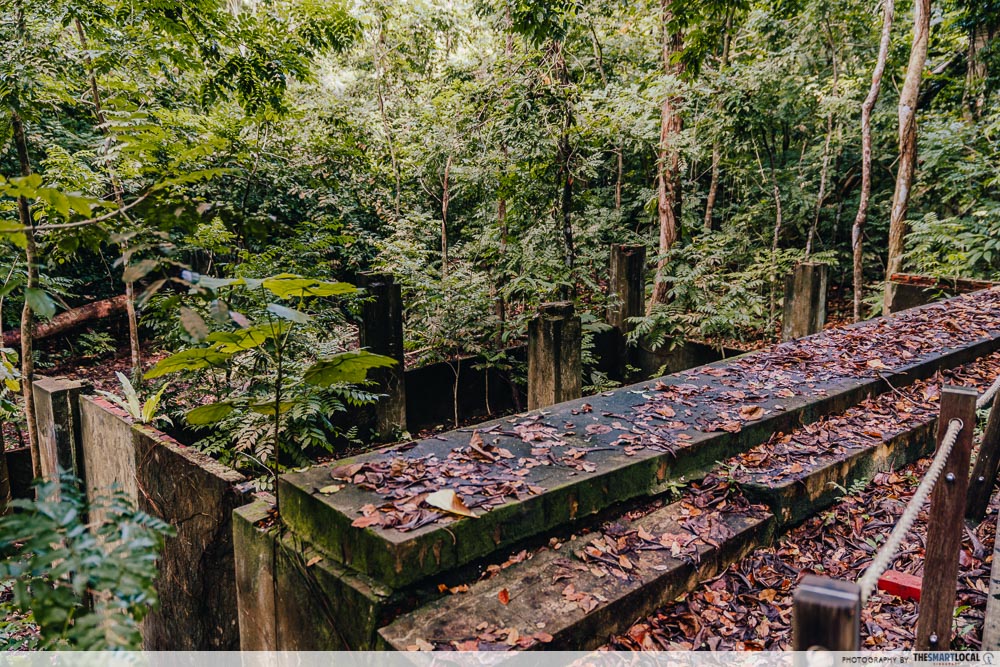 Other nature trails at the park

Besides the Ruins & Figs Trail, the park has 4 other routes you can take. 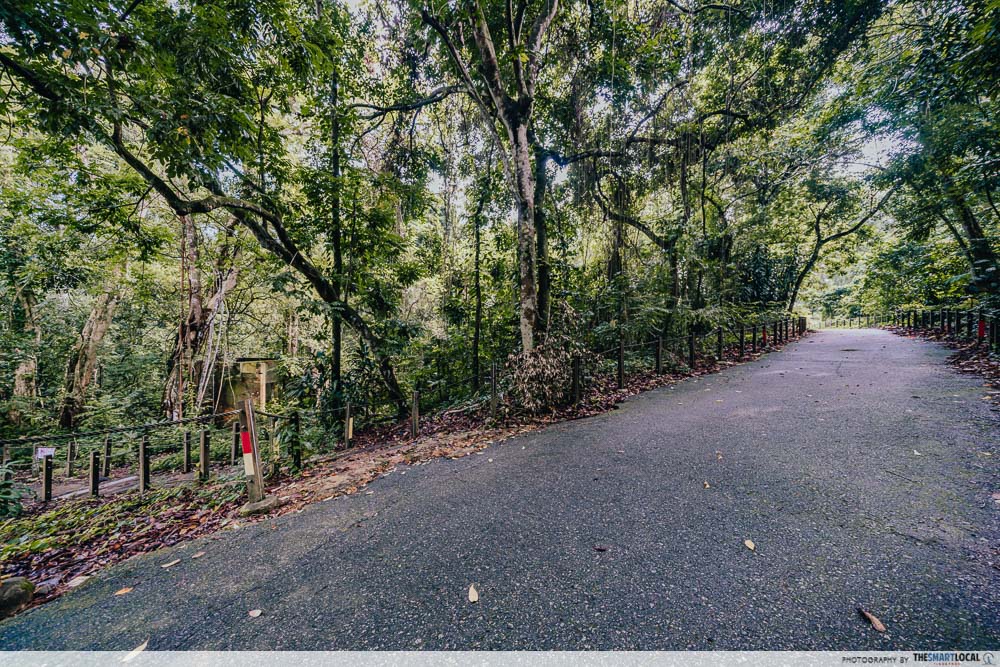 If you’re looking to admire the greenery instead, the Streams & Ferns Trail takes you on a more scenic route. As you slowly saunter down this path, admire the park’s freshwater habitat and more of its lush greenery – just like the arch of branches that forms a natural tunnel.

To get the best of both worlds, this trail intersects with the Ruins & Figs Trail at multiple points, so you can hop between the 2 if you’d like a change of pace.

The Malayan box turtle and spotted tree frog reside within the park.
Image adapted from: IUCN and Ecology Asia

For animal lovers, keep your eyes peeled for aquatic animals like the near-threatened spotted tree frog and endangered Malayan box turtle that may be languishing around the stream. 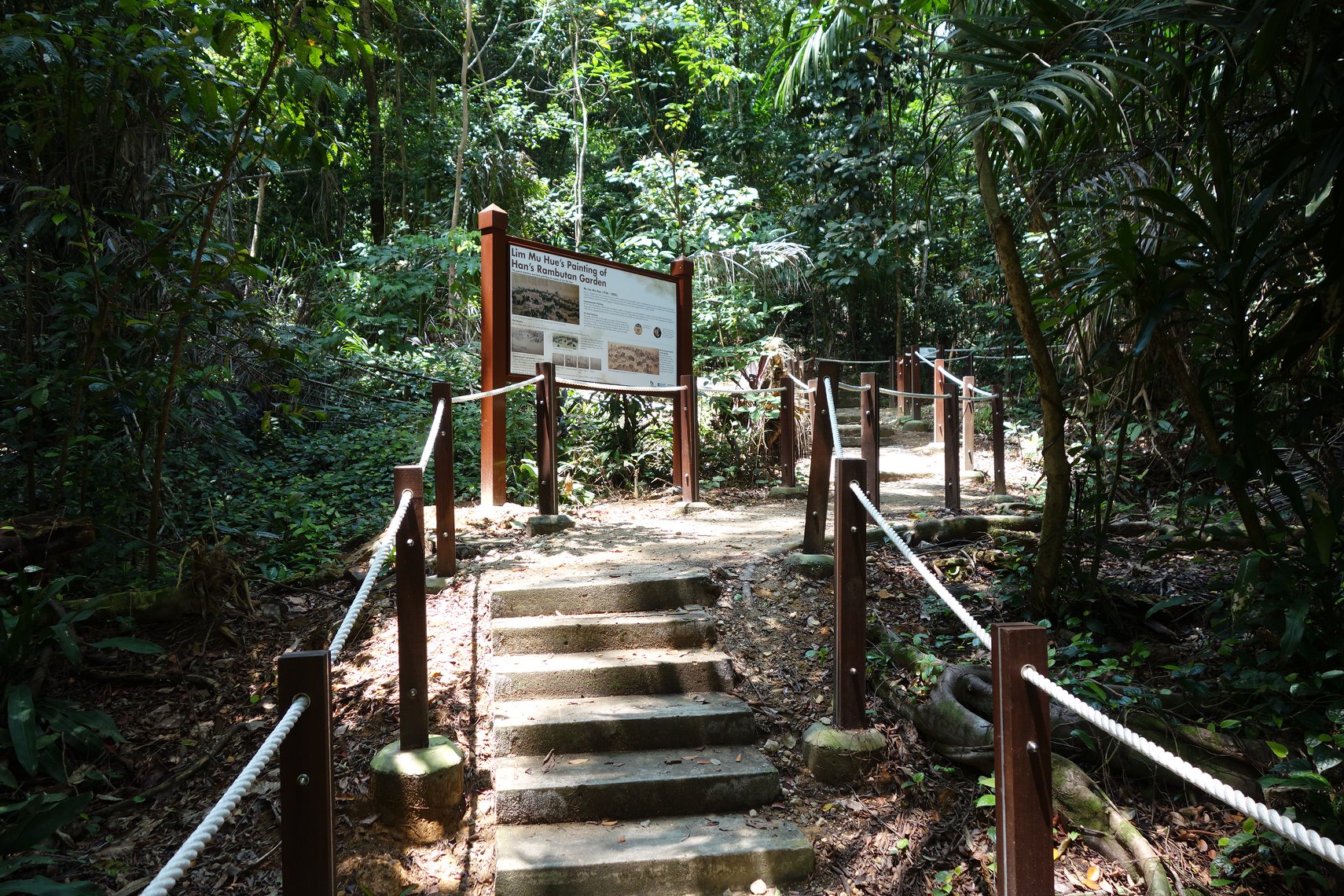 The Rambutan Trail is a standalone trek that loops around the old site of a 1930s rambutan plantation. Just like the rest of the park, scattered around the trail are multiple informational sign boards filled with tidbits of the area’s history so you can understand what life was like back then. 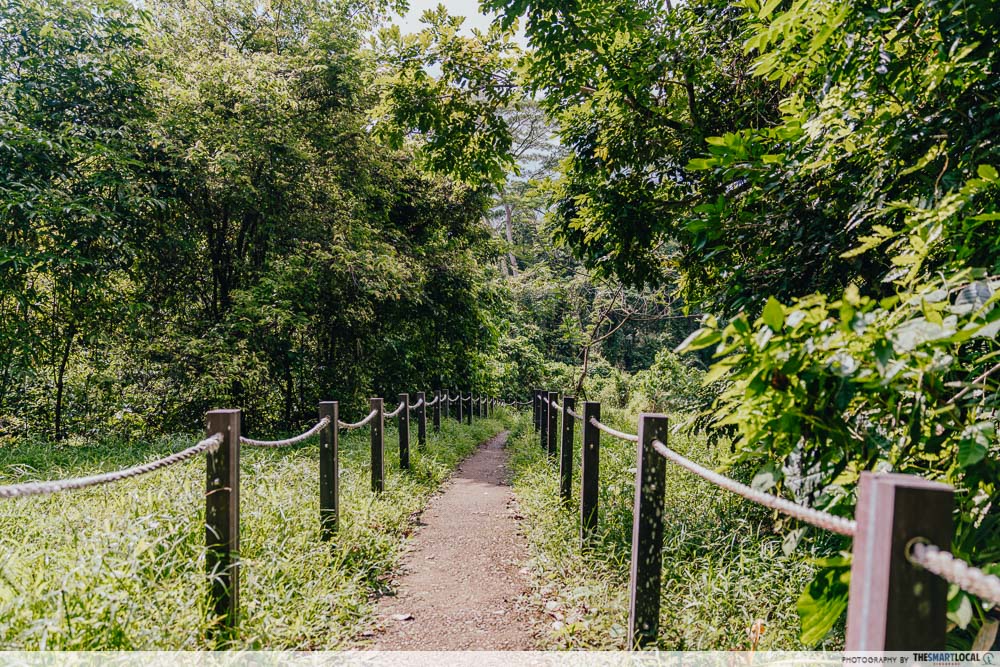 Named after the long-tailed macaque, one of 2 primates that reside in this area, the Macaque Trail is one of the last stretches you can opt for deeper into the park. While trying to spot one of these monkeys, pose for some Instagram-worthy pictures with the scenic open-air view of the grassy plains and towering trees as your backdrop. 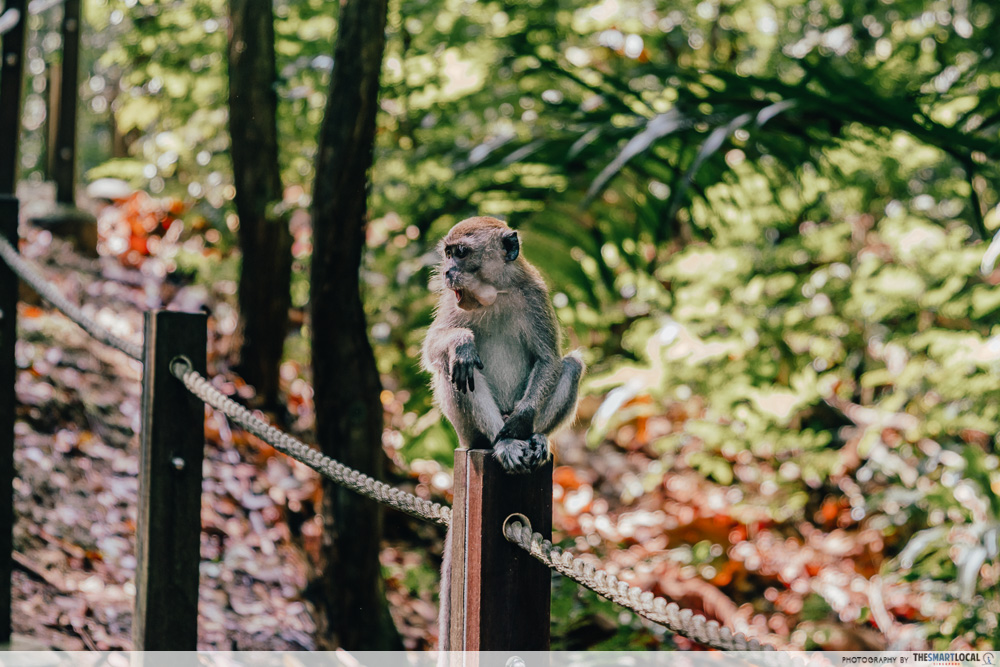 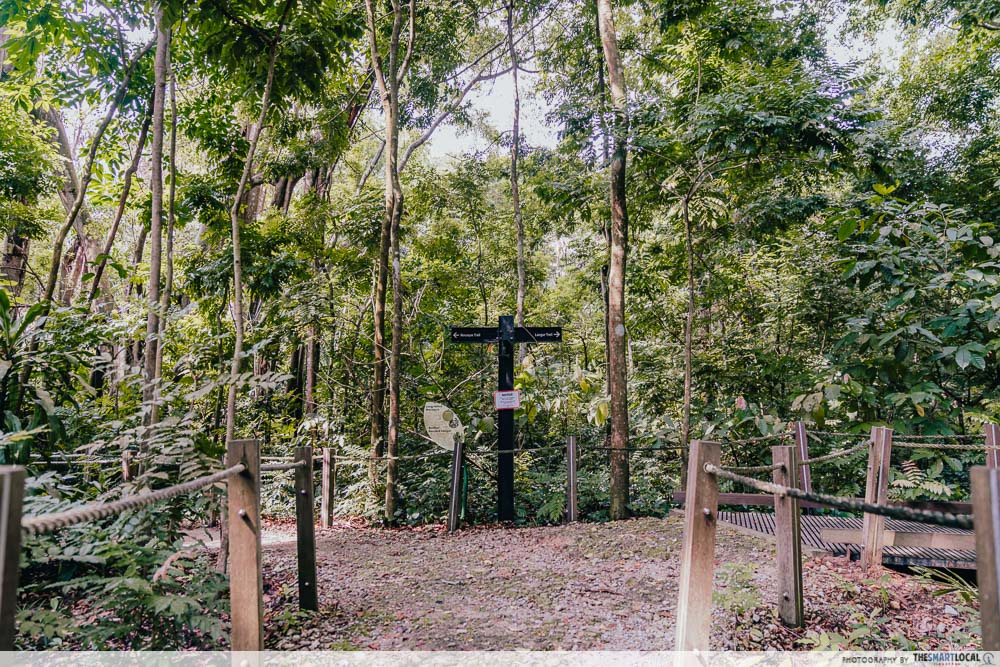 The shortest trail of the lot, the Langur Trail gets its name from the Raffles’ Banded Langur – a vulnerable primate species that is often confused with the long-tailed macaque. Fun fact: the park acts as a conservation site for this rare monkey. It’s said that there are only 60 of these elusive monkeys that roam around nowadays, so consider yourself lucky if you spot one. 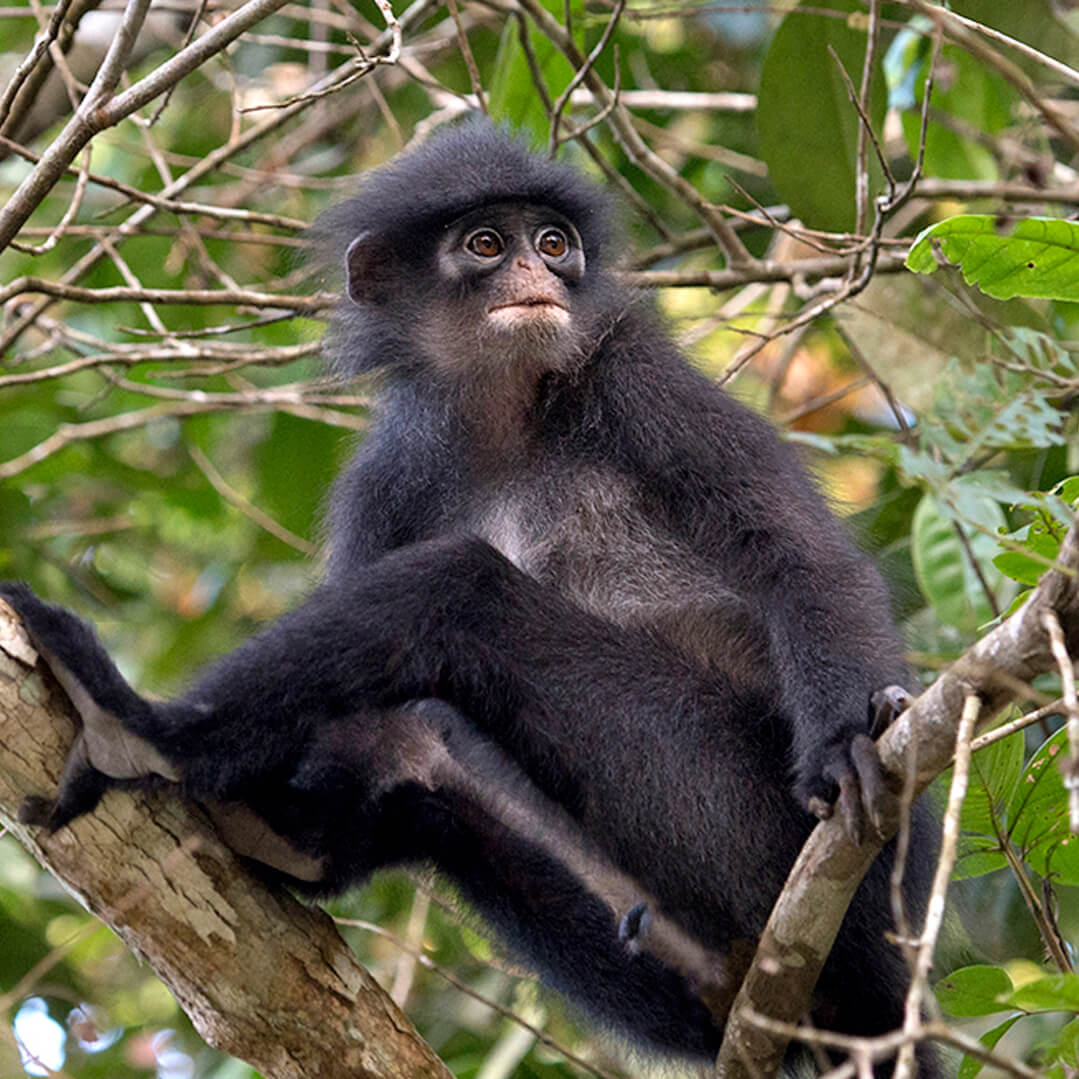 Singapore was teeming with Langurs back in the 1920s.
Image credit: Wildlife Reserves Singapore

Pro tip: Look out for aerial bridges across the forest canopies to have better odds of sighting the Langur. Built from rope, these connectors were specially constructed to facilitate movement of tree-dwelling animals like the Langur, so you may very well see one cross before your eyes.

Catch a glimpse of other wildlife in their natural habitat

Bird watching throughout the park 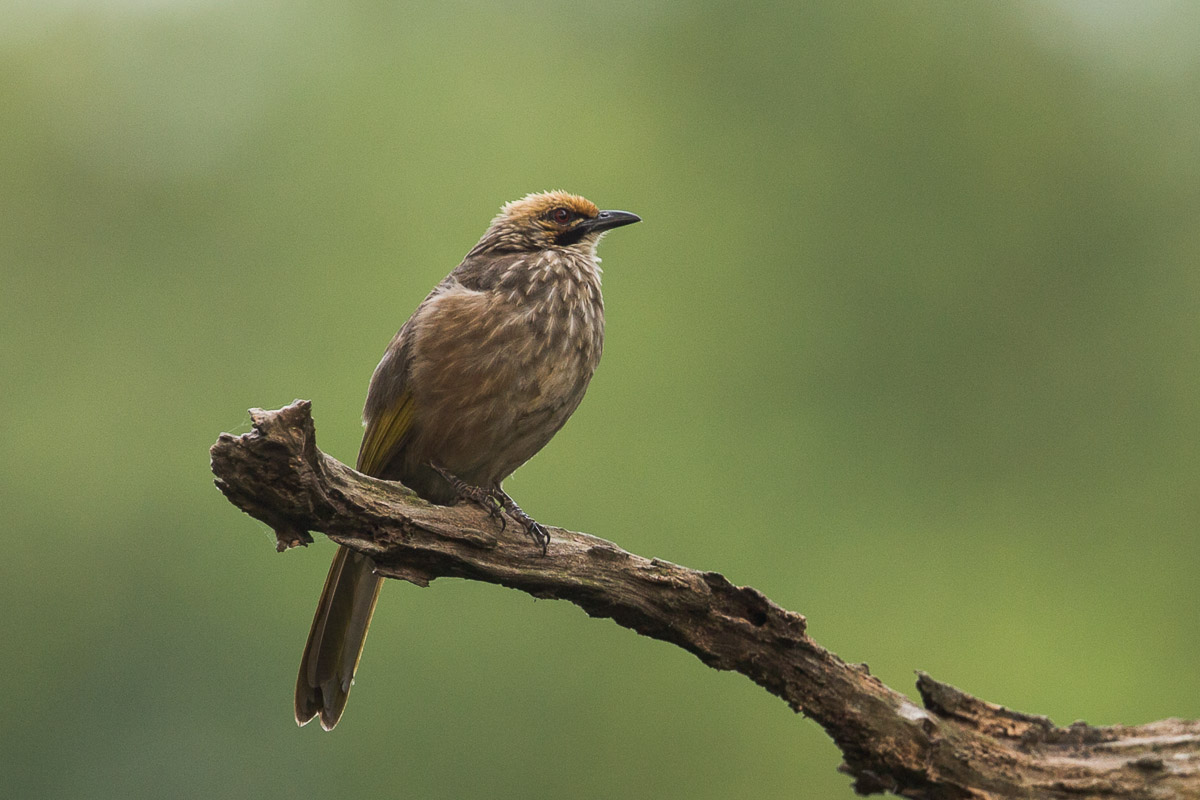 Hidden in the foliage of the park are numerous species of birds which enthusiasts are constantly on the lookout for. The critically endangered straw-headed bulbul is just one of the many breeds soaring about in the park, so having a pair of binoculars on you would be ideal for your bird-spotting needs. 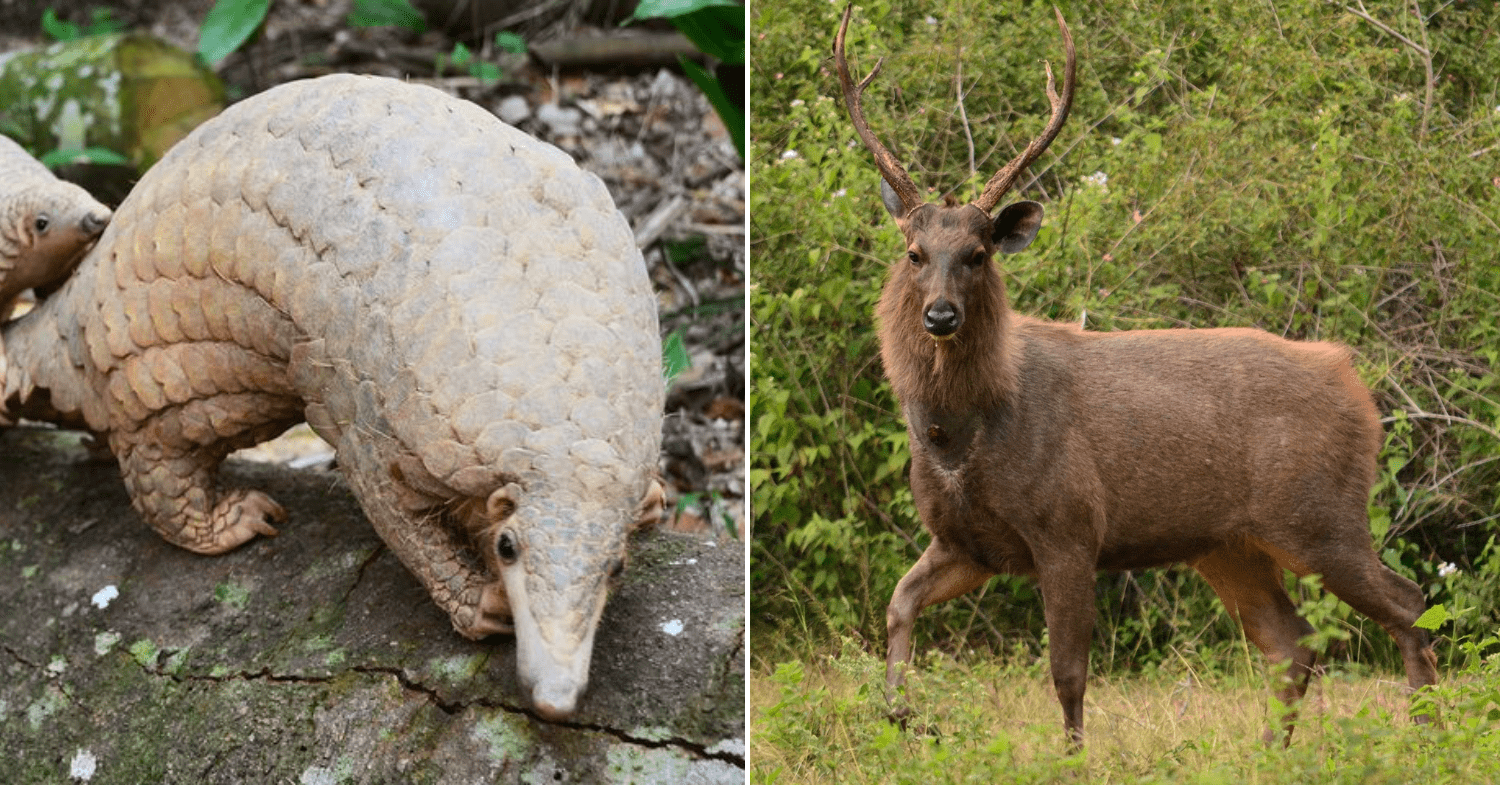 The park is also a conservatory for both the Sunda pangolin and the Sambar deer.
Image adapted from: ZooBorns and Creatures of the World

2 other endangered creatures to add on to your mental register of rare animals to look out for are the Sunda pangolin and the Sambar deer. You may catch the pangolin scurrying about as they wander around the park or even spot the nocturnal deer in deep slumber near thick vegetation. Treat them like Shiny Pokemon – it’ll be incredibly hard to find them but on the off chance you do, it makes the trip all the more worthwhile. 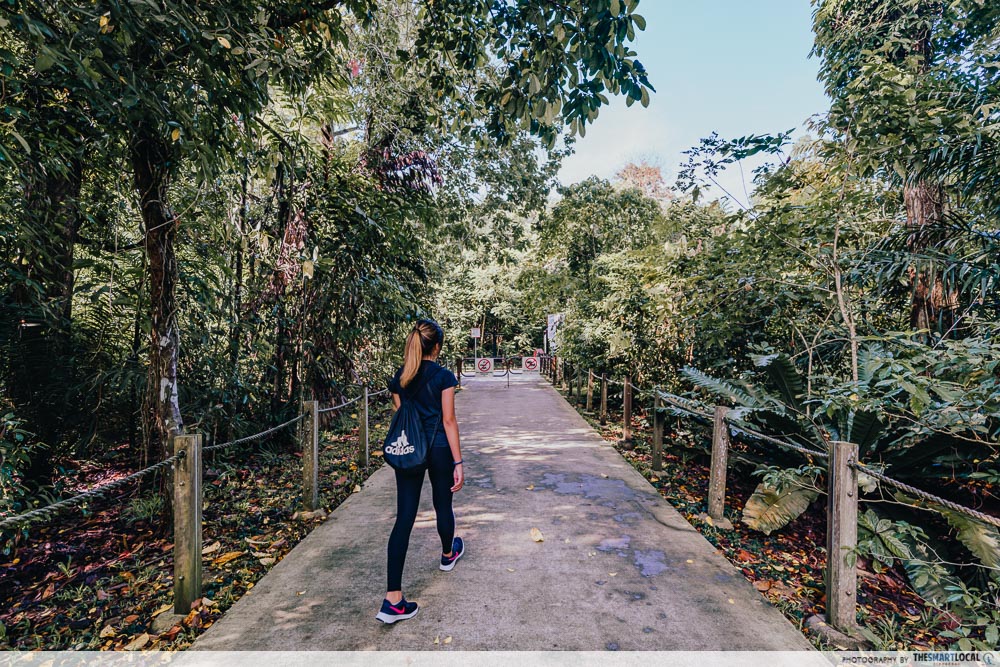 With a raft of exotic animals and vegetation breathing life to a historical site, Thomson Nature Park serves as a quaint reminder to take it easy, making it the right place to unwind and embrace the simpler things in life. 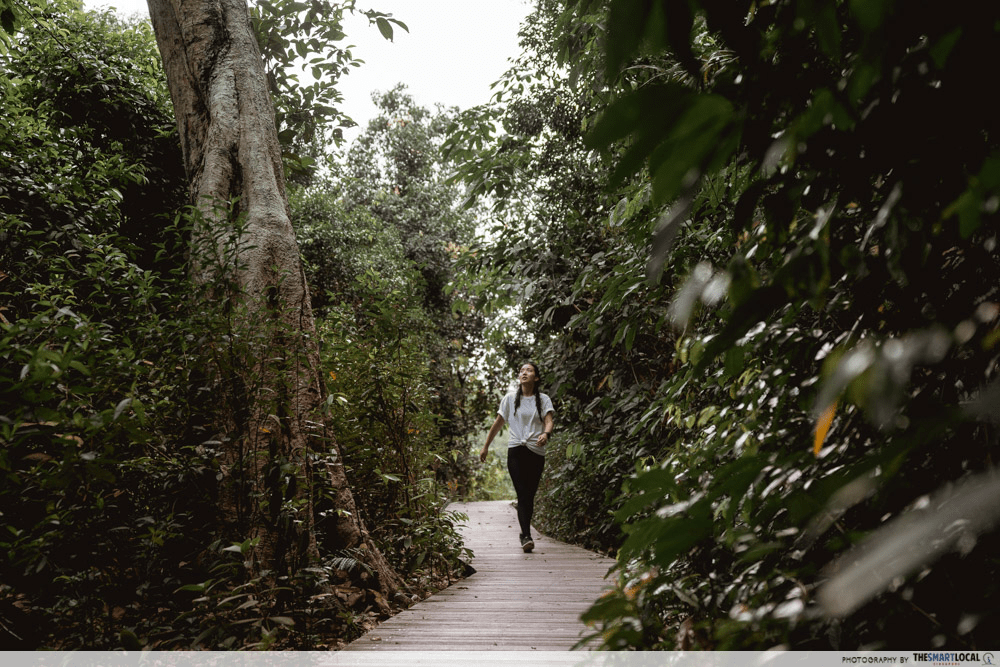 Lower Peirce Reservoir’s boardwalks are nicely paved for a breezy cool down walk.

If you’re done exploring the park and still have some mana left, visit Lower Peirce Reservoir which is just a short walk away to get some extra steps in. Else, the Upper Thomson area has plenty of food options for you to refill your energy bar. 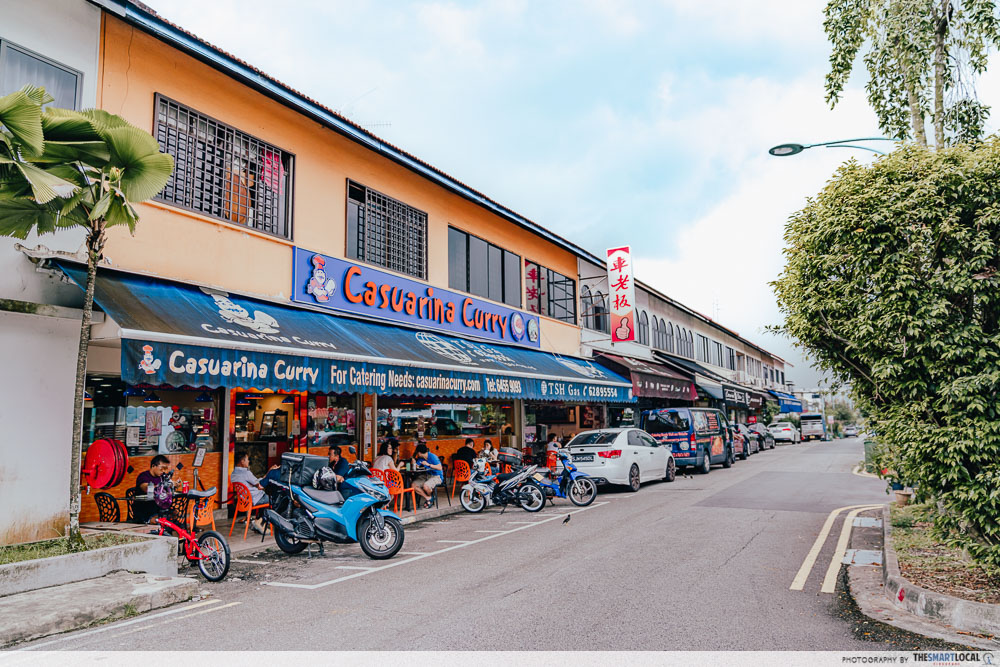 Pop by Casuarina Curry for some prata after your hike.

Photography by Alvin Wong.
Article originally published on 18th September 2020 by Benjamin Wellesley. Updated on 30th May 2021 by Ra Krishnan. 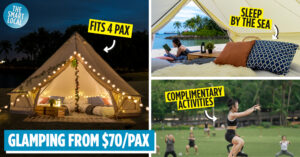 Sentosa Has Glamping By The Beach, $5 Spin Classes & A Festive Market To Sea-riously Unwind
PUMA Now Has A Pop Up Challenge At Bugis+ Where You Can Score Freebies &... 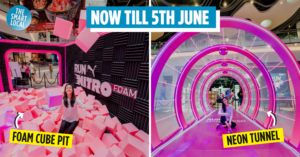