Think long train rides and chances are, a trip from Pasir Ris to Joo Koon may come to mind. For most of us Singaporeans, it’s hard to imagine a train journey ride lasting more than a day – much less one on a locomotive choo choo train. And no – we’re not talking about Thomas The Tank Engine.

Now touring the world in the form of a travelling exhibit, the train’s original carriages and antiques can be found at Gardens By The Bay from now till 13th June 2021. 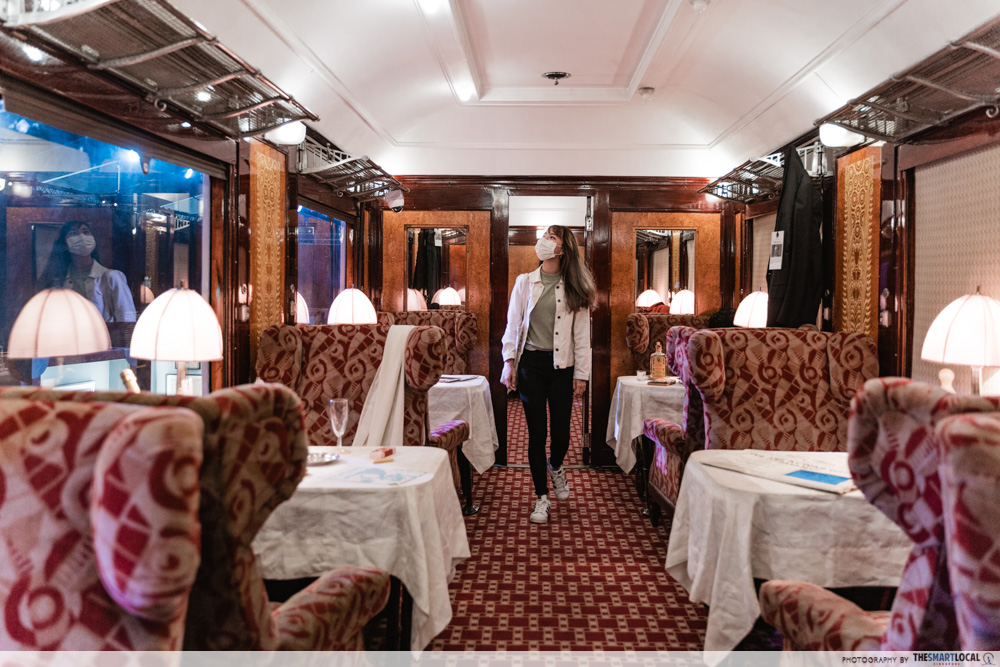 We know of few things that have been around for almost a hundred years – so you may be surprised to find that the train carriages here are a whopping 91 years old. And yet, they still look not a day older than 50 – essentially ageing goals.

The only evidence of its true age is the light and musky smell of old wood, which you might notice upon boarding the carriage. 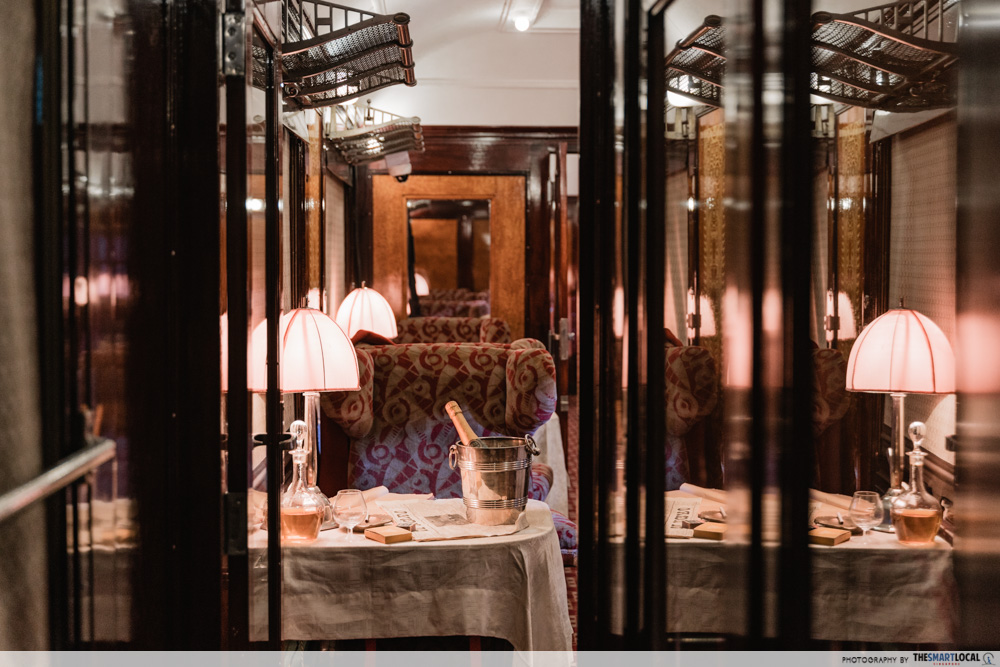 You can wander through two train carriages here: pullman and fourgon. The pullman is the train’s lounge carriage, where passengers used to relax and enjoy meals. Inside, all the furnishing from the walls and doors to chairs and carpet are all from the original Orient Express so it’s essentially a glimpse back in time. 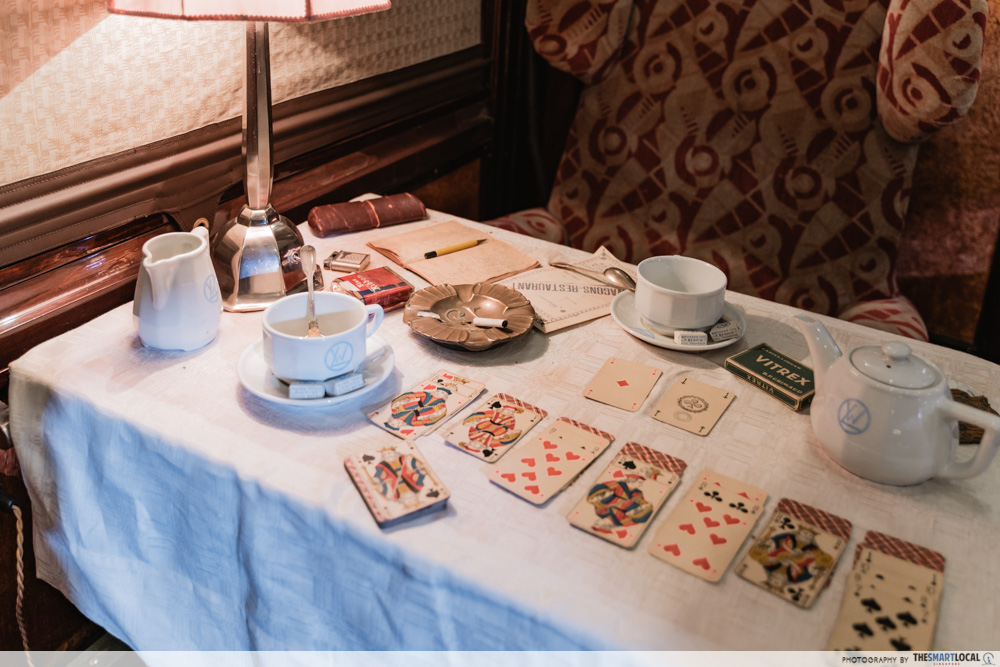 Some seats are even set up with props such as playing cards, pearl necklaces and even cigars lying to give you an idea of what life on the train was like back in the day. Fun fact: smoking was allowed on The Orient Express! 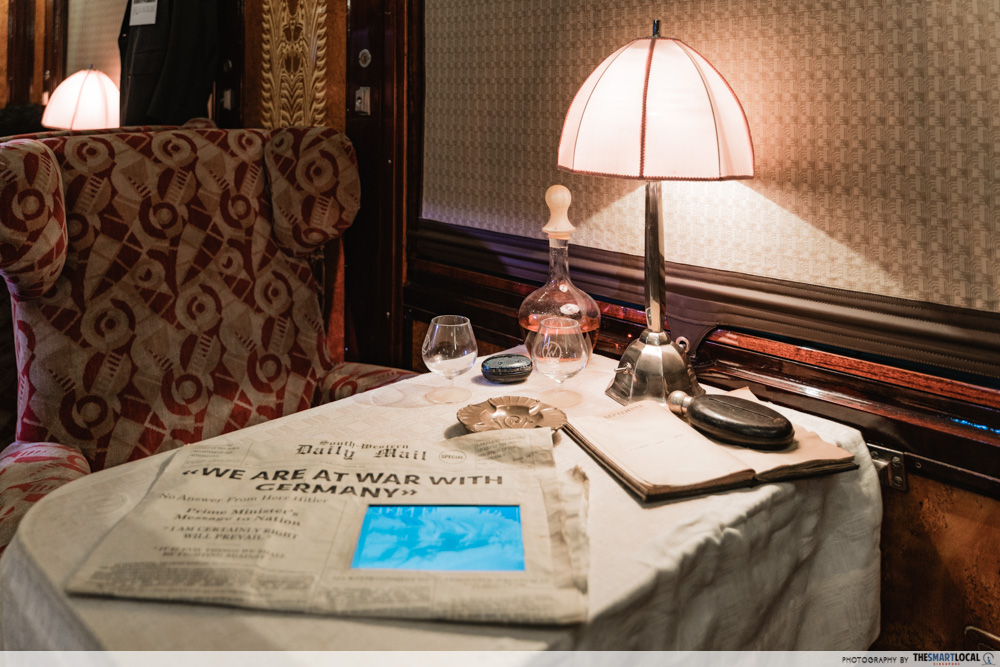 Newspaper with screens of moving characters – are we in a Harry Potter movie? 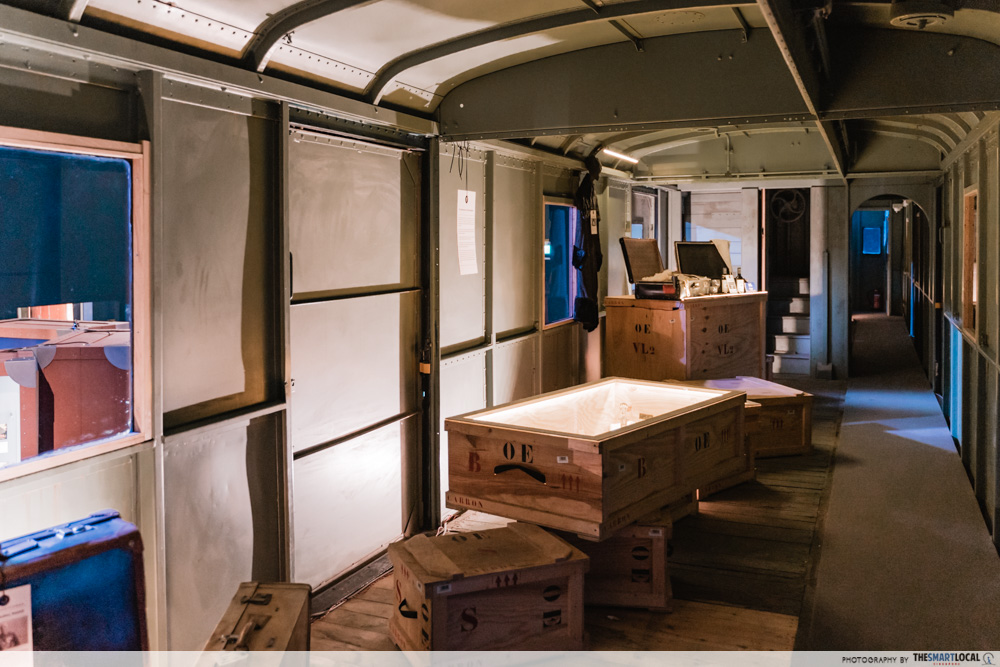 Head further down and you’ll go into the second carriage, which rail buffs might also recognise as a fourgon. It’s essentially where baggages used to be stored, but this particular carriage’s interior pays homage to Agatha Christie, and her novel, Murder On The Orient Express. 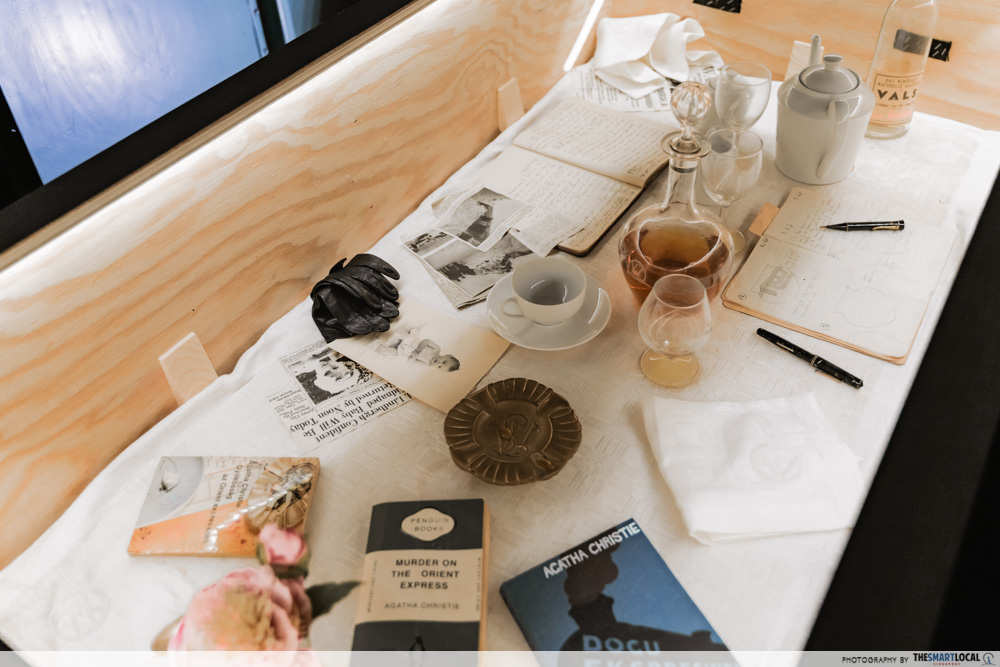 Romantics might be interested to know that the book was written during her many trips to and from Iraq, where her husband, Max Mallowan, worked as an archaeologist.

Other details within this carriage include a shelf with vintage clothing and a pair or boots, alongside an unexpected “dead body” with 12 “knife stabs” – a reference to the book that readers might appreciate. 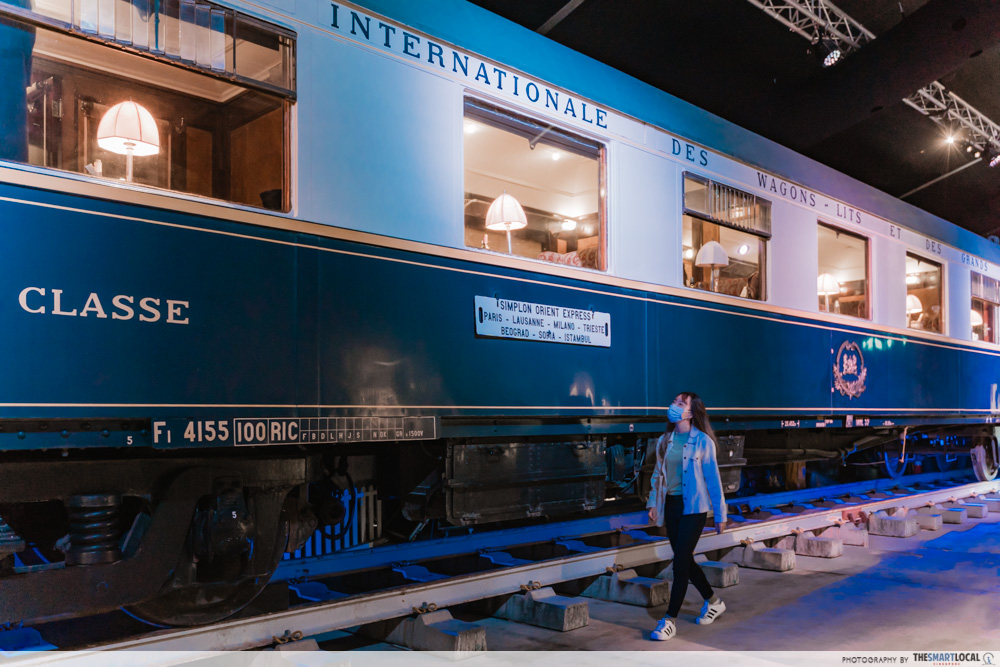 The exterior of the train’s carriage

Explore a boutique museum filled with >300 antiques and train parts 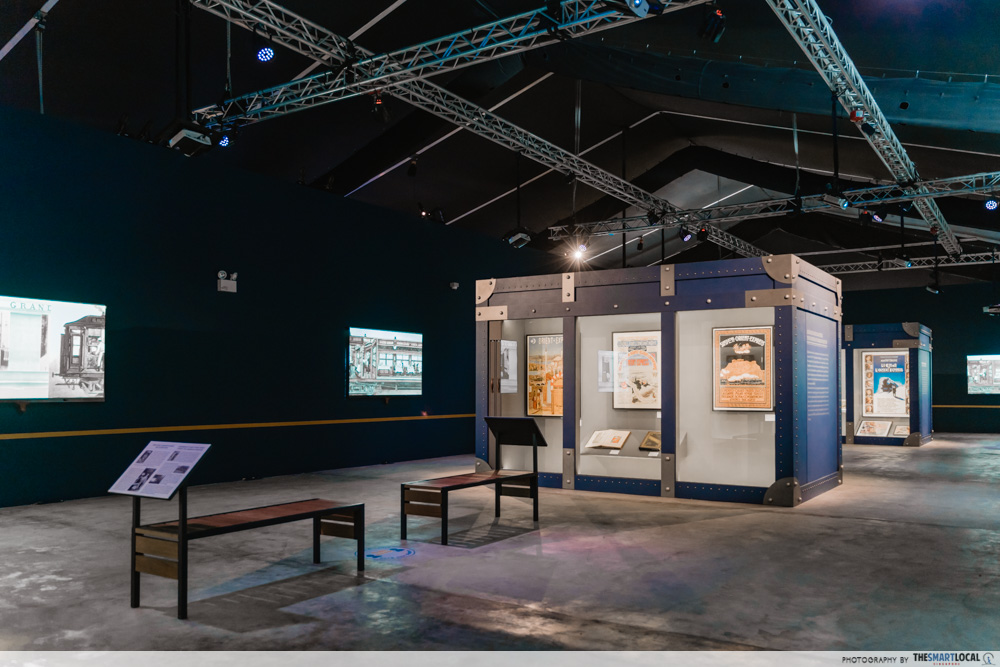 Emerge from the second carriage and you’ll find yourself in a boutique museum brought to life with more than 300 antiques, including crockery, cutlery, train parts and attendant uniforms.

Museums aren’t my go-to spot to spend a day off, but this space clicks differently, having walked through the Orient Express carriages just seconds before. Each antique piece and poster seems to have an imaginable purpose now. 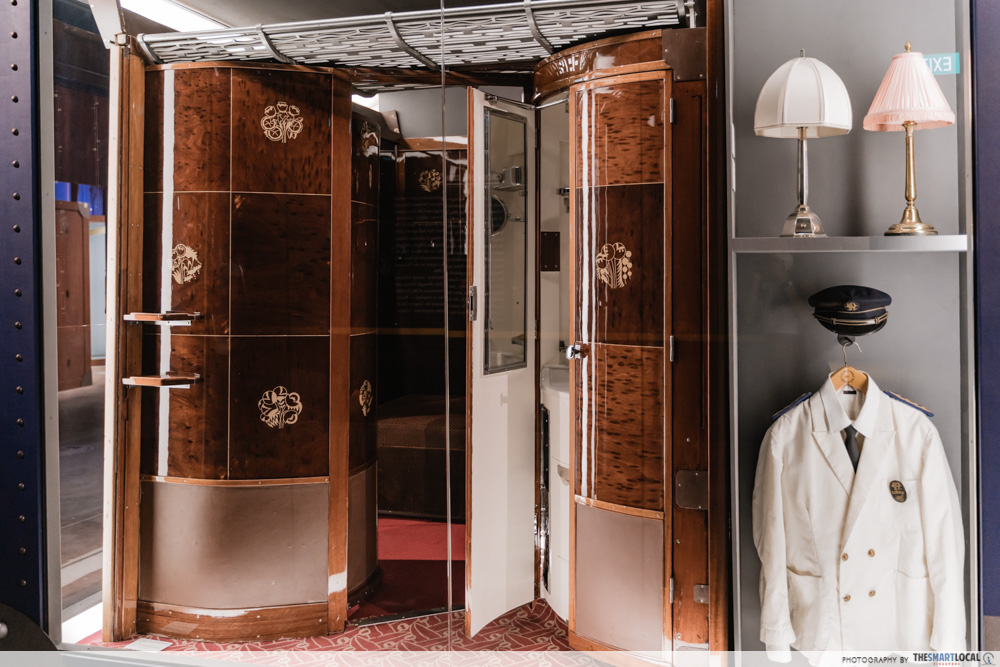 Perhaps the one which caught our eyes best was the suite rooms, the 1800-2000s equivalent of an SIA A380 first-class suite. With a private room and in-house sink for washing up, it’s an exclusive room we’d gladly stay in even today. 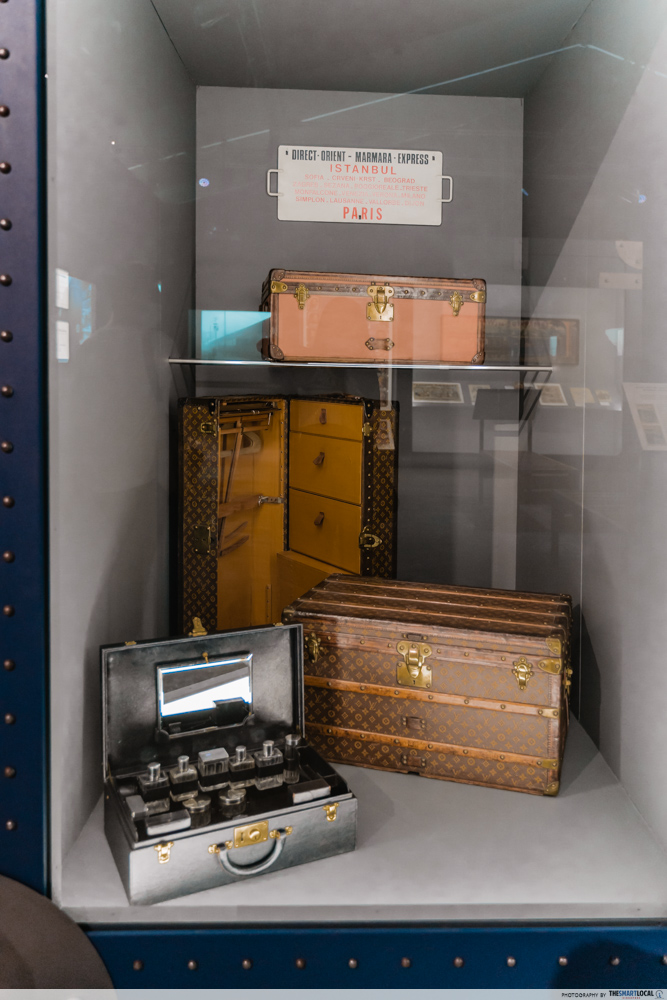 Vastly different from those tiny handbags we see today, these sturdy Louis Vuitton luggage cases look more like treasure chests, and can possibly fit some of our entire wardrobes. 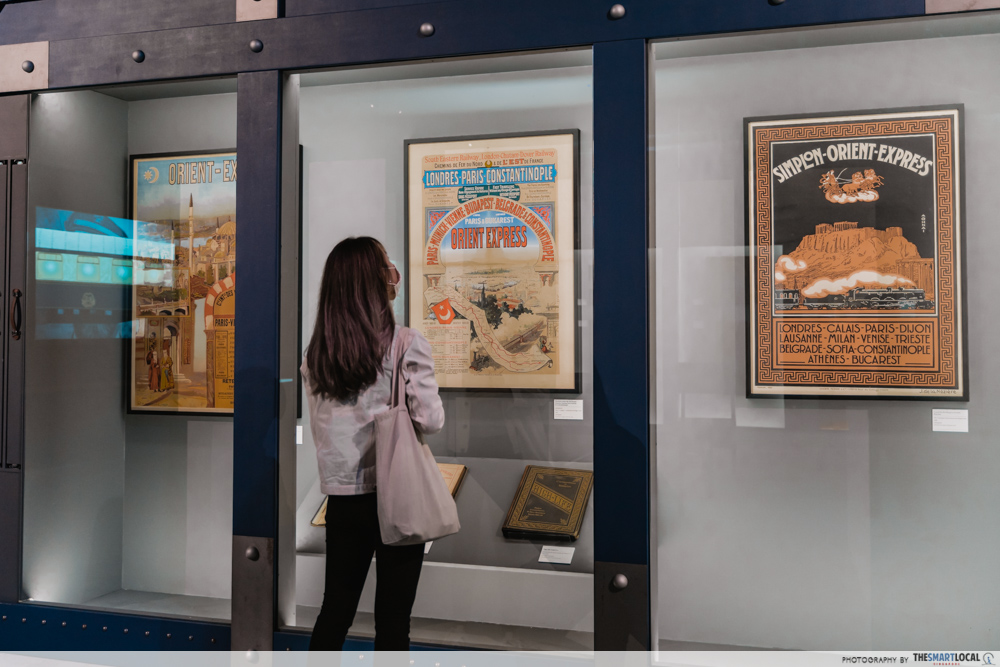 Also within are the posters once used to promote The Orient Express and its hotel chains. You’ll spot texts like “Electric lights!” or “Hydraulic Lifts!” to highlight the rare luxuries of the era.

Take home a souvenir at the merch store 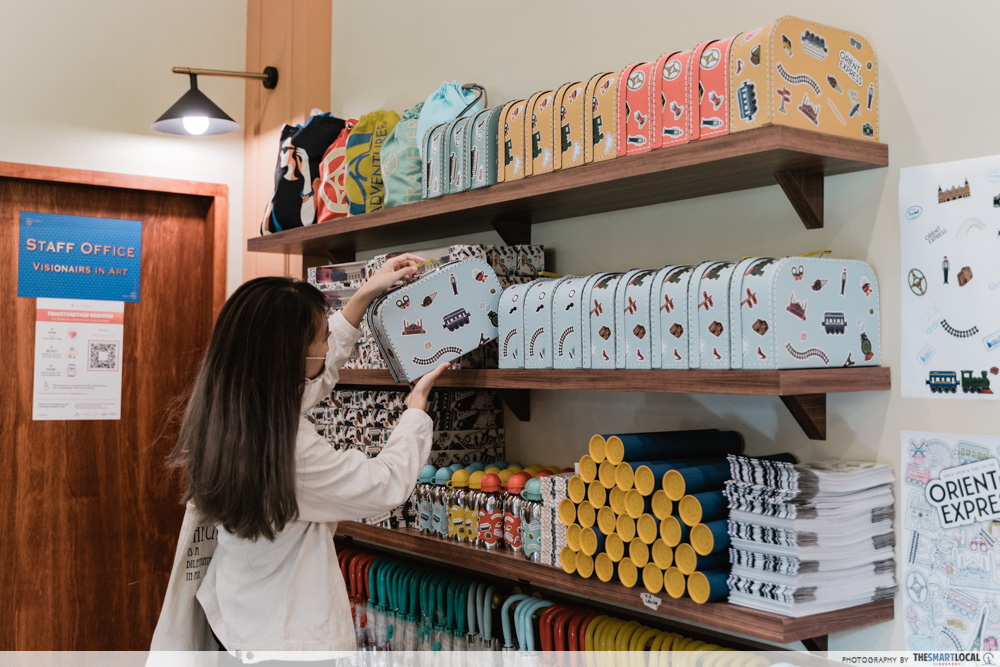 After the exhibit leaves our shores, there’s little chance we’ll be able to catch sight of the train again. Grab a memento at the merchandise store with bits and bobs such as wooden stamp sets, mini-Orient Express trains as well as postcards priced from $1.50. 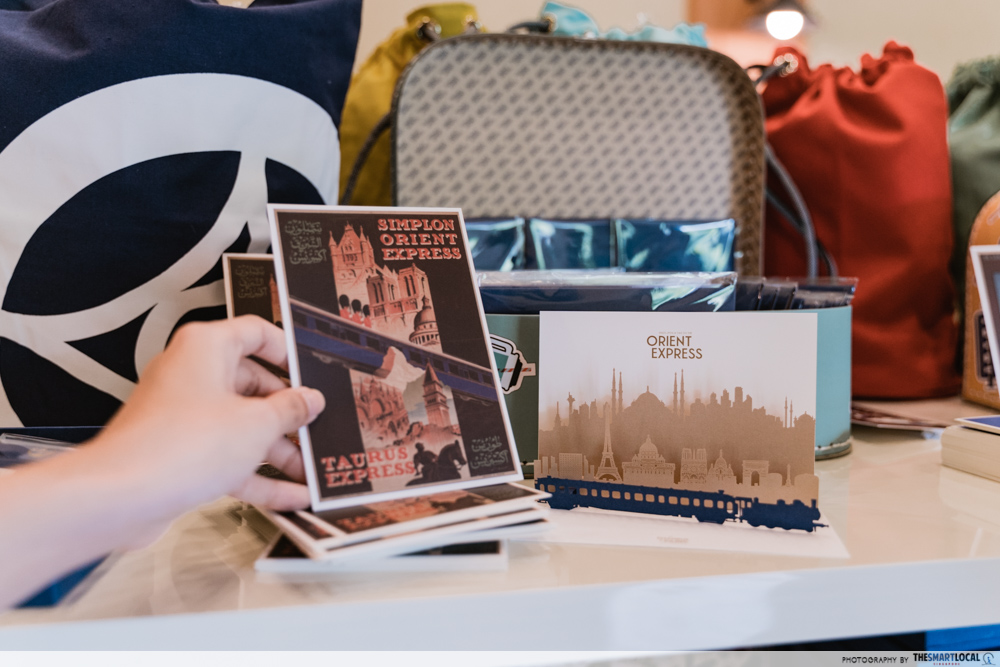 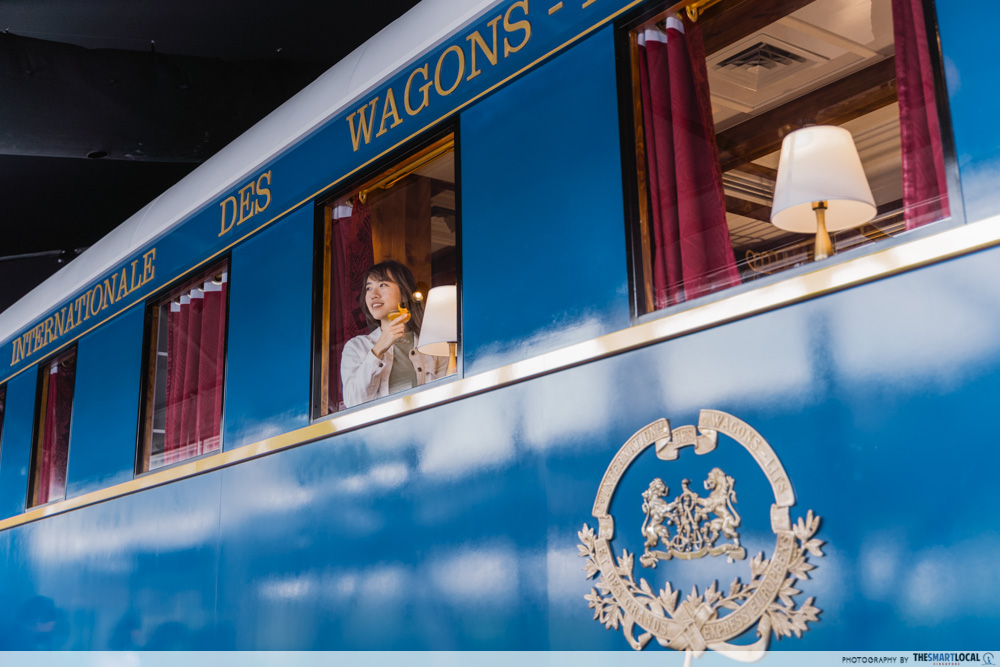 While we can’t quite get the same experience on the iconic train today, one can still have a taste of it in the exhibit’s pop-up restaurant helmed by Double Three Michelin-starred Chef Yannick Alléno. 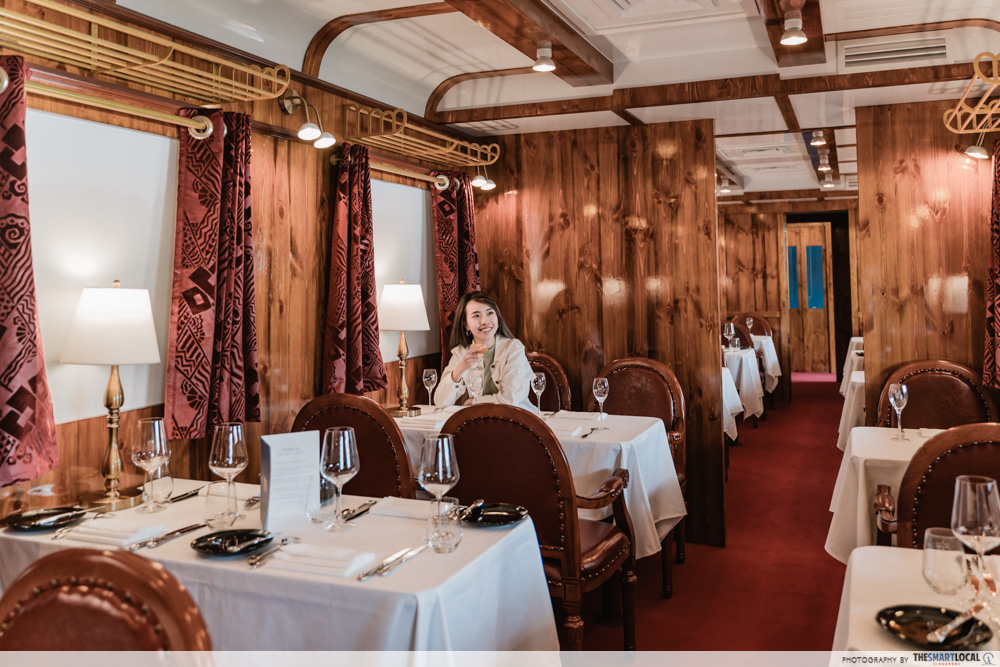 Housed within a 1925 Anatonilla dining car replica, the restaurant’s interior looks pretty much like a refreshed version of the real deal, with rich velvety curtains and gold-coloured overhead storage to place your bags. All in all, it’s a perfect setting to enjoy a meal and tell yourself you’re an affluent madame in the days before the turn of the century.

Expect flavours influenced by the many countries the train connects such as France, Turkey and Egypt. Prices start from $78++/pax, with five time slots and menus to choose from:

Note that reservations are required and are only taken in groups of two or four. Hi-Tea is the only meal available at the time of writing. Catch more updates on The Orient Express’ website.

Grab snacks and coffee at the Orient Express Road Cafe 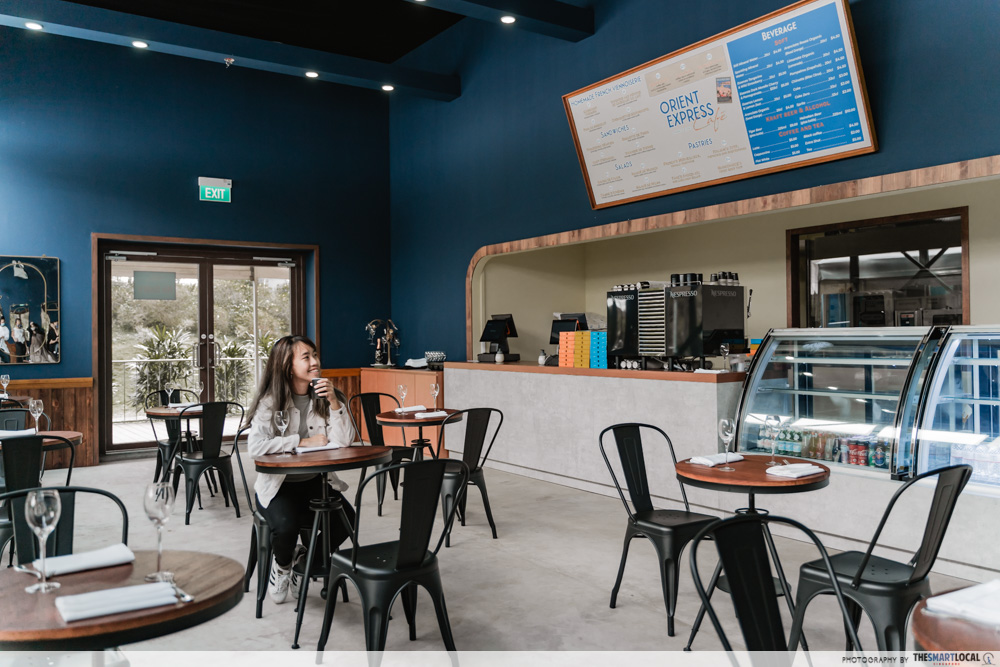 For those feeling peckish, there’s also the Orient Express Road Cafe, that’s open to the public. Relax in their French bakery-influenced interior and savour their fresh bakes, sandwiches and salads priced from $7. Grab a cuppa to go with from $4.50.

About The Orient Express 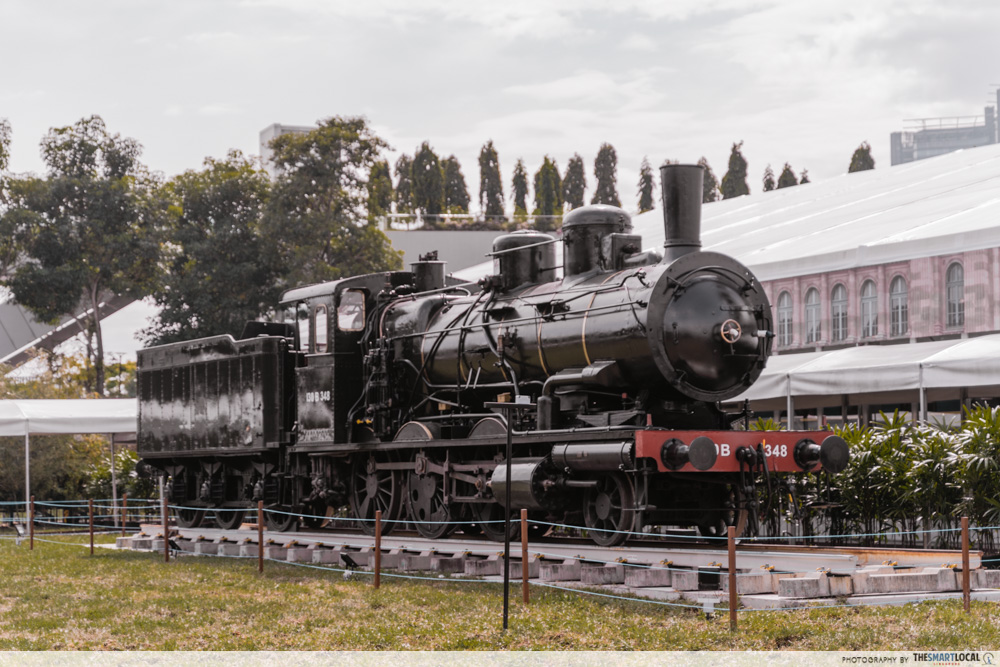 As millennials with “itchy feet” might know, wanderlust is a powerful thing. It’s what keeps us travelling and also what drove founder Georges Nagelmackers to start The Orient Express service back in 1883. It was the first train of its kind to link London to Istanbul, unravelling new possibilities of travel in the era of our great grandparents.

More than a hundred years later, it now lives on in the form of a travelling exhibit. Singapore is lucky enough to be the second stop, with Paris being the first back in 2014. And if you’re wondering how it got here, it wasn’t by rail – the hefty train was shipped all the way across the world just to make it to our little island!

Visit The Orient Express in Singapore 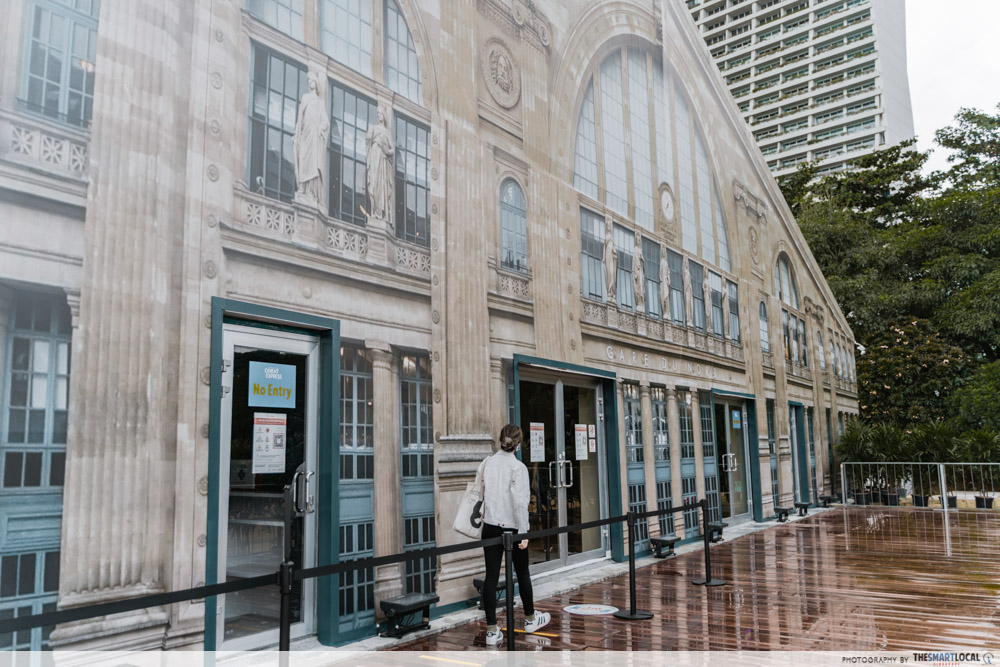 We can’t travel the world now, but we sure can feel like we’re travelling back in time with the rich, interactive exhibit Once Upon A Time On The Orient Express.

Take this chance to hop back into the era of chugging locomotives, from $25/pax or $88/family of two adults and two children – kids under three enter for free. Besides, it’s not often we get a chance to explore one of history’s most iconic trains.

Getting there: The nearest carpark is at Bayfront Plaza Open Air Carpark. 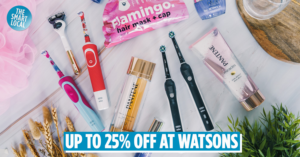 5 Practical Christmas Gifts To Get Each Member Of Your Family, So Nobody Will Say “Waste Money”
You Can Now Play An Army-Themed Murder Mystery Online & Find Out Who’s The Most... 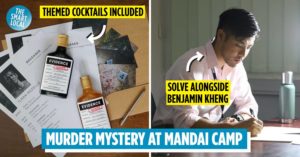