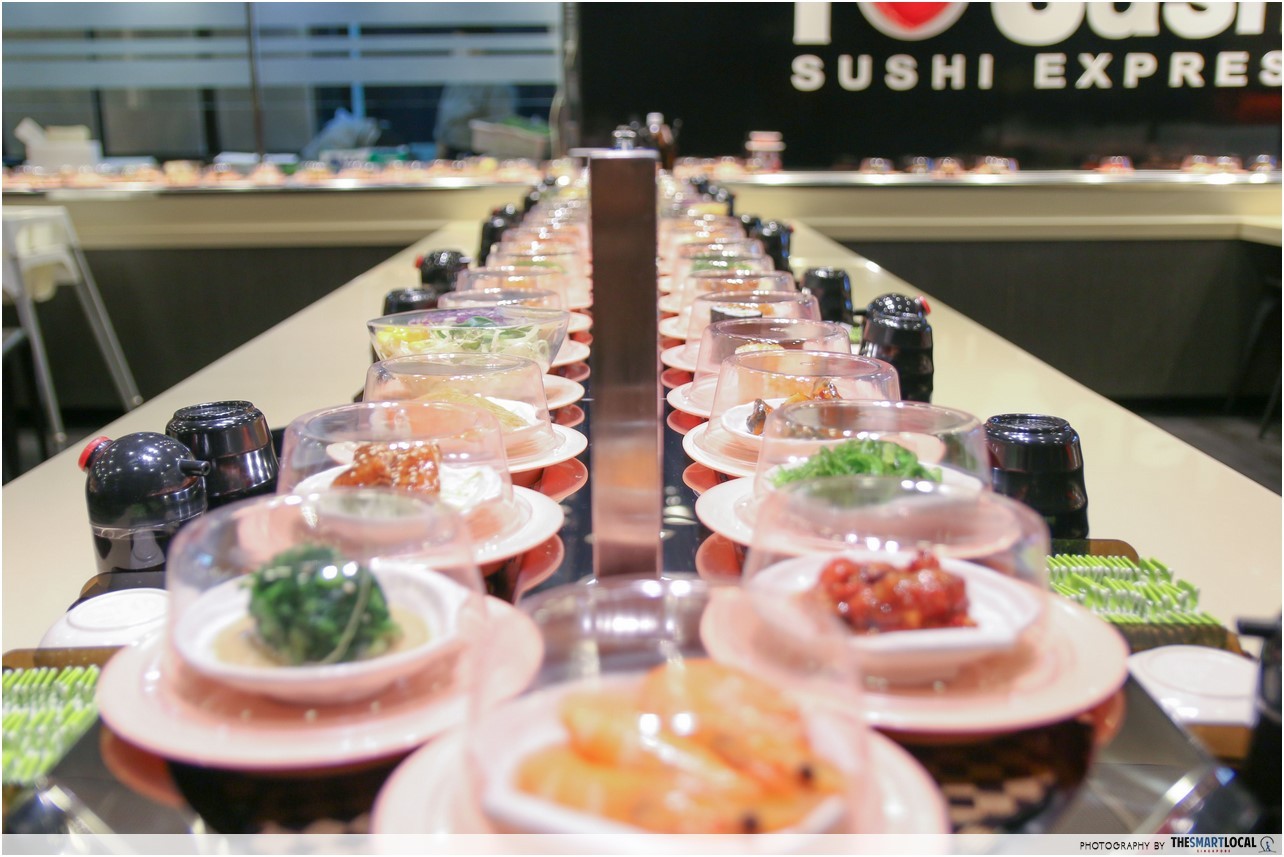 Sushi Express is the Daiso of sushi, only cheaper. It’s the famous $1.50++ sushi chain. And I know what you’re thinking, how can sushi that cheap be any good right?

So as a girl on a mission, I decided to head down for a visit to discover their secret to selling premium sushi for only $1.50++ per plate and if they were anything more than a cheap eat. Here are 10 things you probably never knew about the chain.

1. There are seasonal specials every month 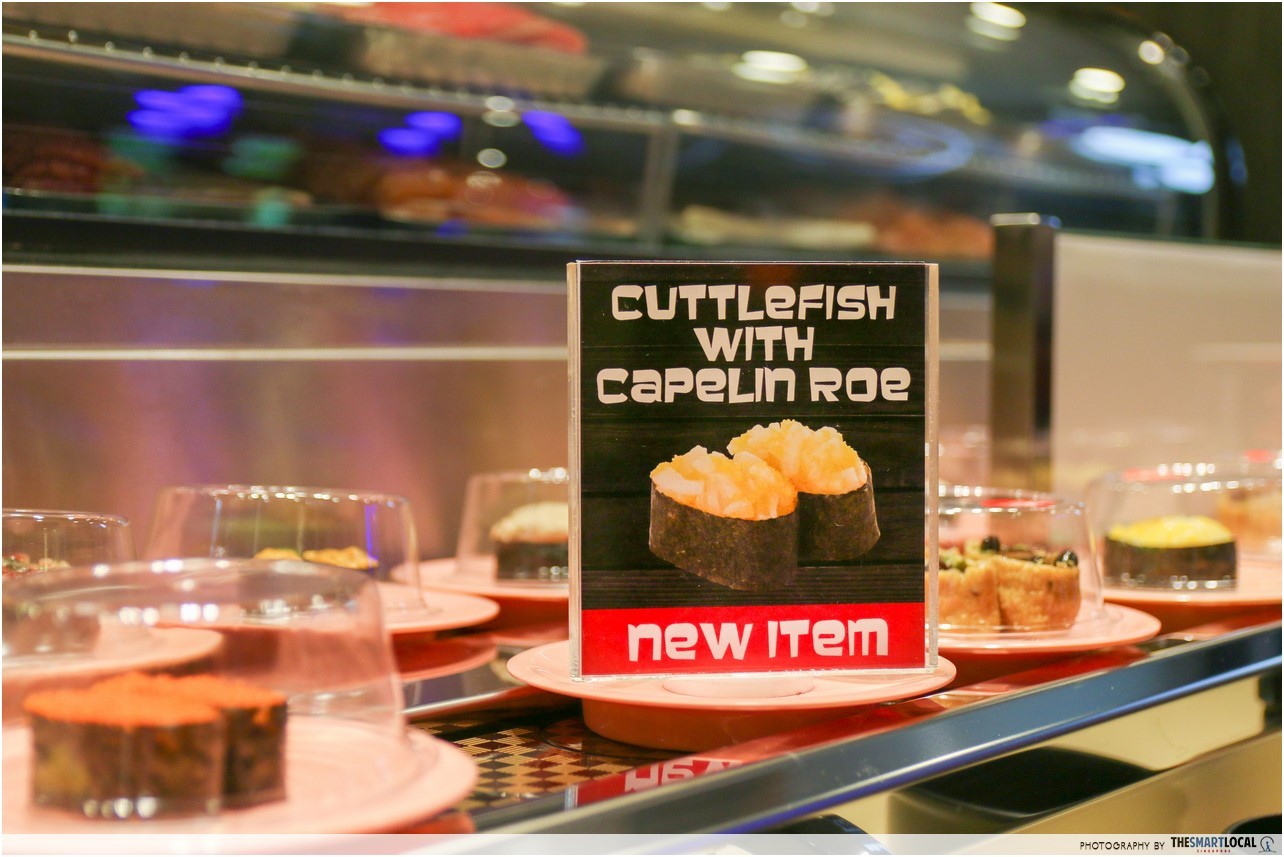 Their chefs are incredibly adventurous. Probably 8 out of 10 Sushi Express regulars don’t know that there are new seasonal specials every single month. Apart from the usual suspects of salmon sashimi and the giant hokkaido scallop, this is something you’ll want to keep your eyes peeled for. 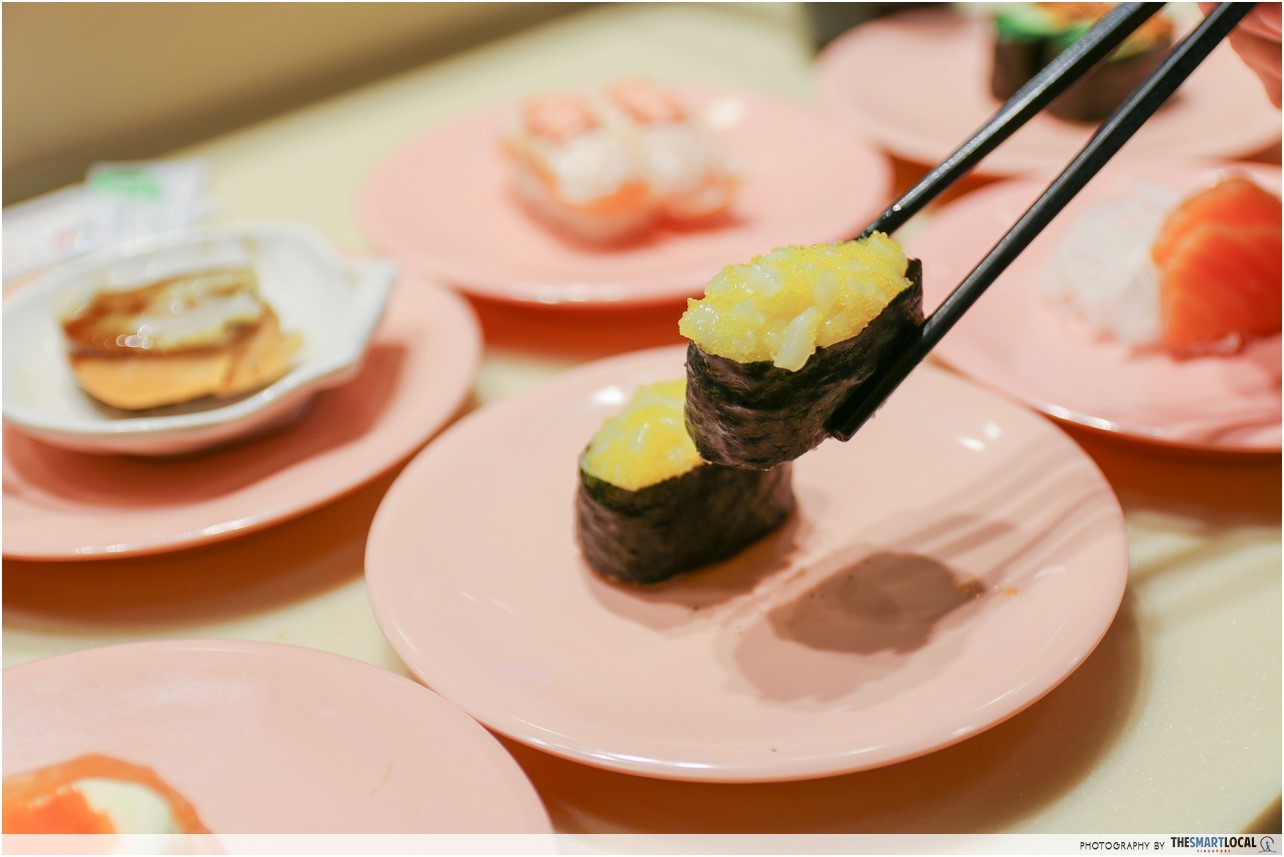 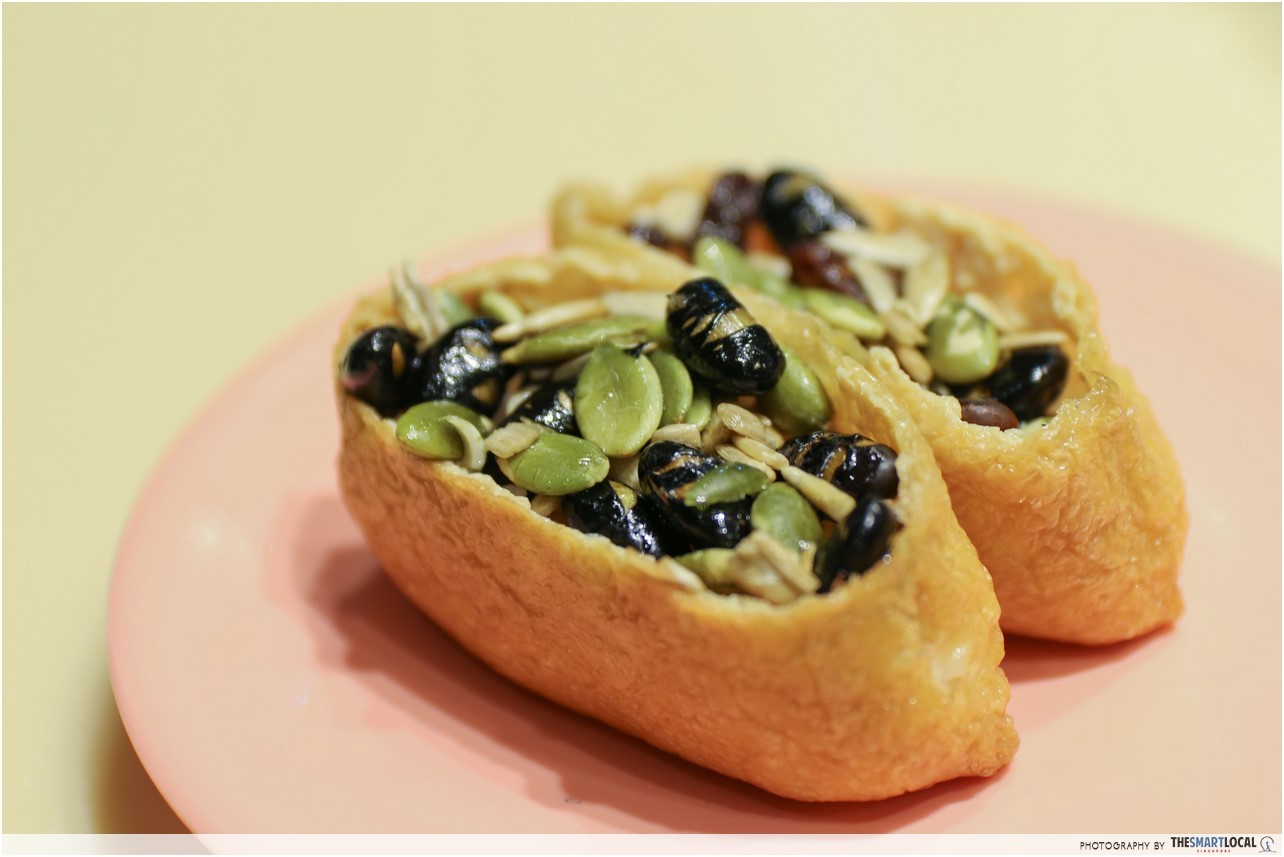 The June specials are the Mixed Nut Inari and Cuttlefish with Capelin Roe. Who knew you could ever find cereal at a Japanese sushi restaurant? This was definitely a first for me, and being a hardcore granola fan, I dived straight in to try the nutty creation. To my amazement, this queer mix of ingredients turned out to mesh perfectly together – a sweet sushi with great crunch. 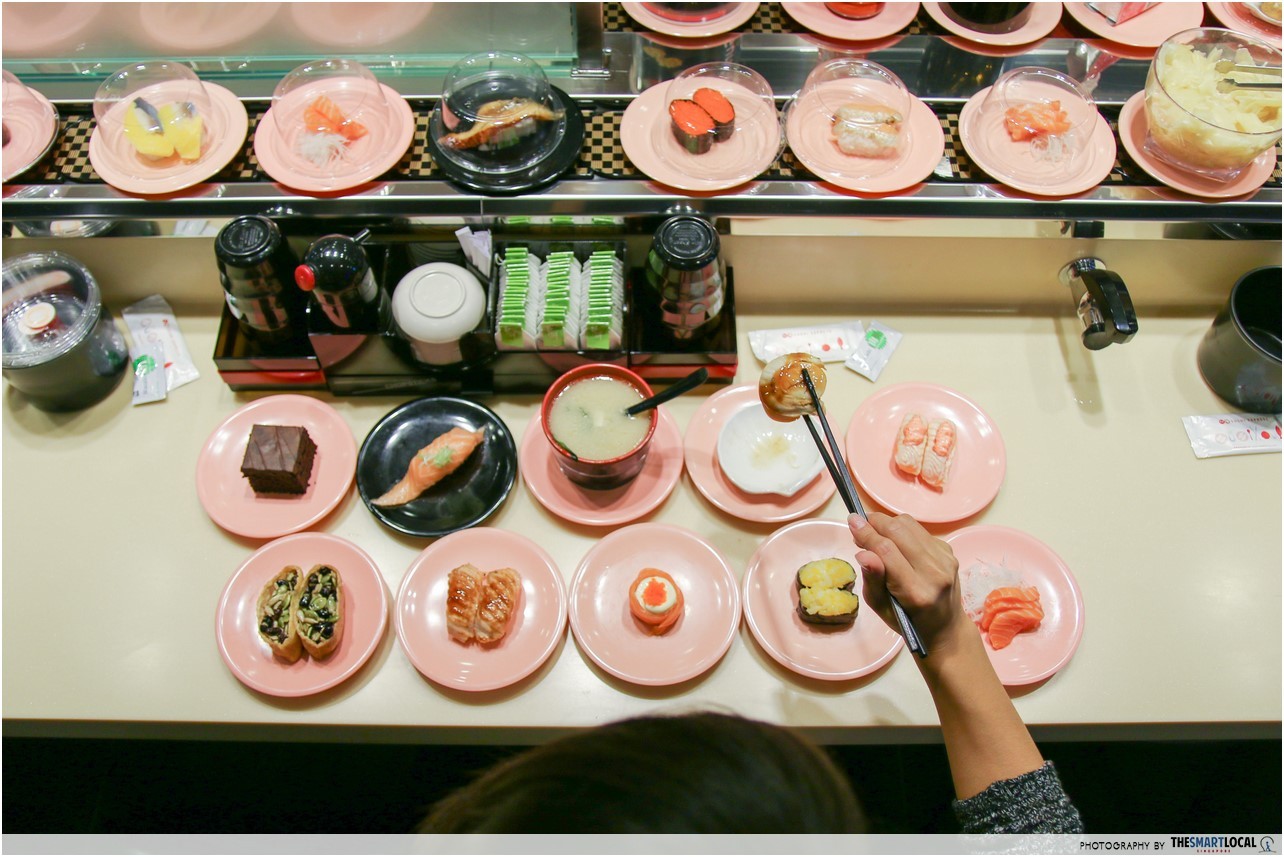 The unique concoctions are so out of the ordinary that they may surprise your tastebuds and become your new favourite. And if the response is good, it stays! The Giant Scallop, made of fresh goodness well beyond its price tag, is one seasonal special that was added to the menu.

2. Every outlet has a prime seating spot 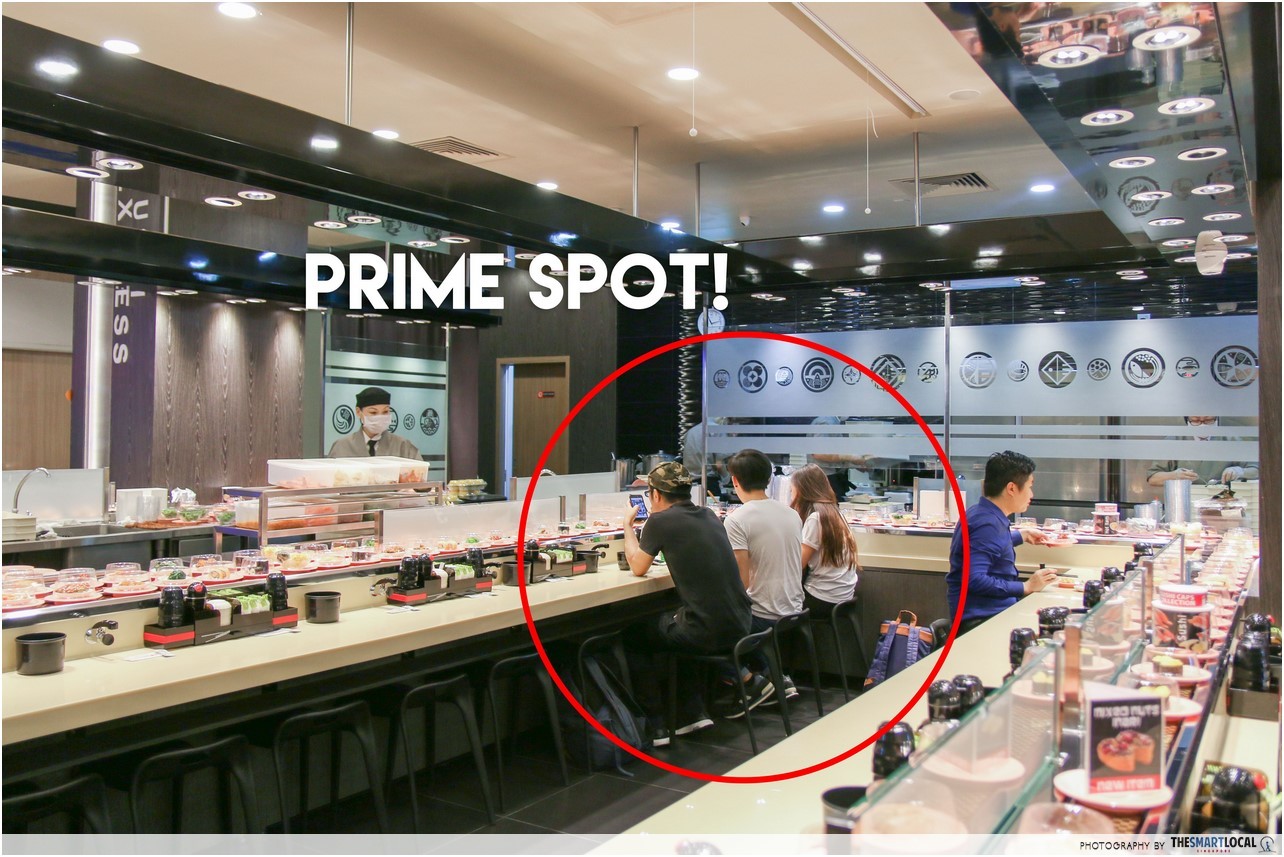 We all love the idea of revolving sushi, feeling the excitement when our favourite dish appears and we snatch it before anyone else does. But this can happen only if you are seated in the prime spot of the restaurant. Or what’s left on the belt is an empty spot your neighbours left behind, as you watch them dine lavishly on that Grilled Salmon Belly in envy. 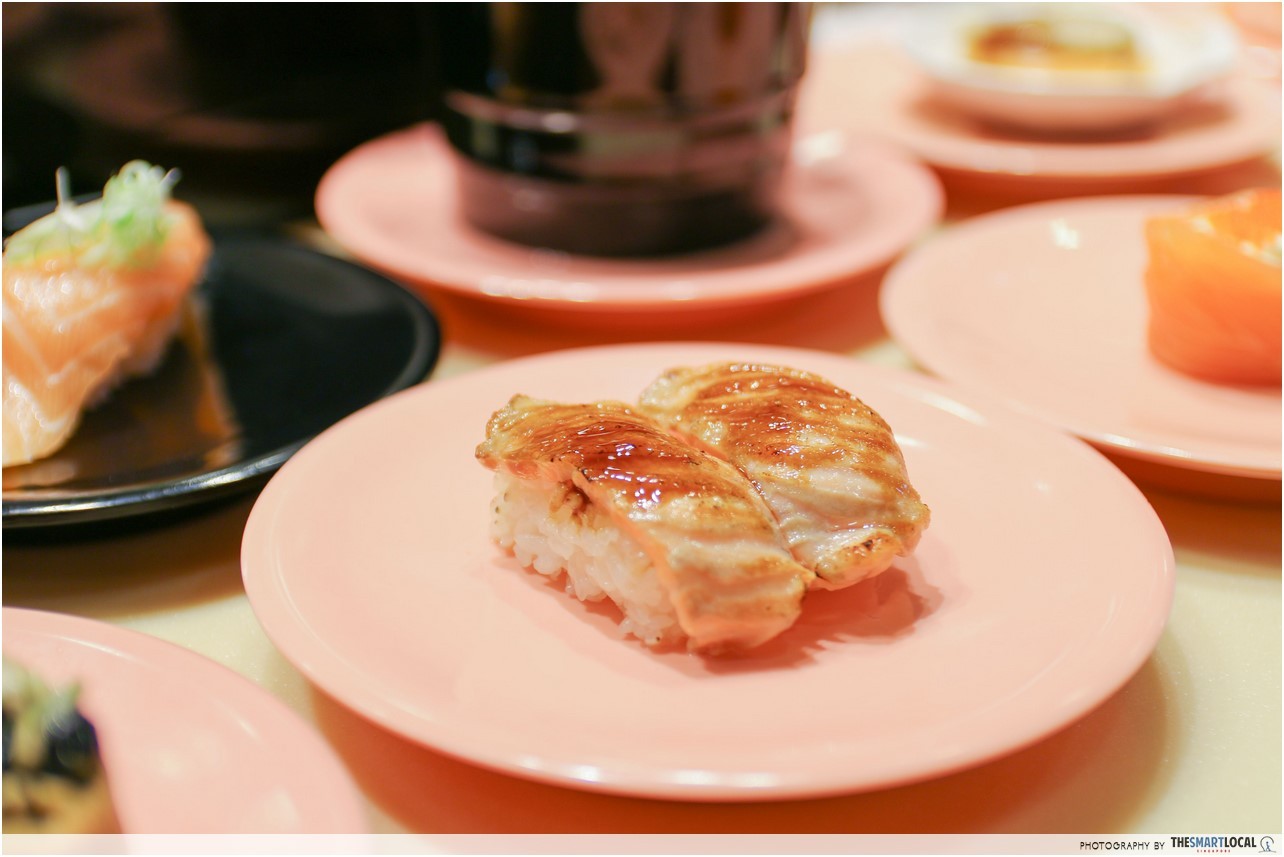 I scouted their 313@somerset branch for that prime seating spot and the secret is to stay within the little corner circled above, where the kaburi chefs prepare sushi on the spot and serve it right in front of you. A simple tip for spotting the best seats in any conveyor belt sushi restaurant is to go to where the chefs are standing.

And if there are two belts, like this outlet, find the intersection between both passages to be the first to grab the fresh favourites.

Note: Seating is managed by the staff, but you can request to be seated there if there isn’t a crowd.

3. You can request for items you don’t see on the conveyor belt 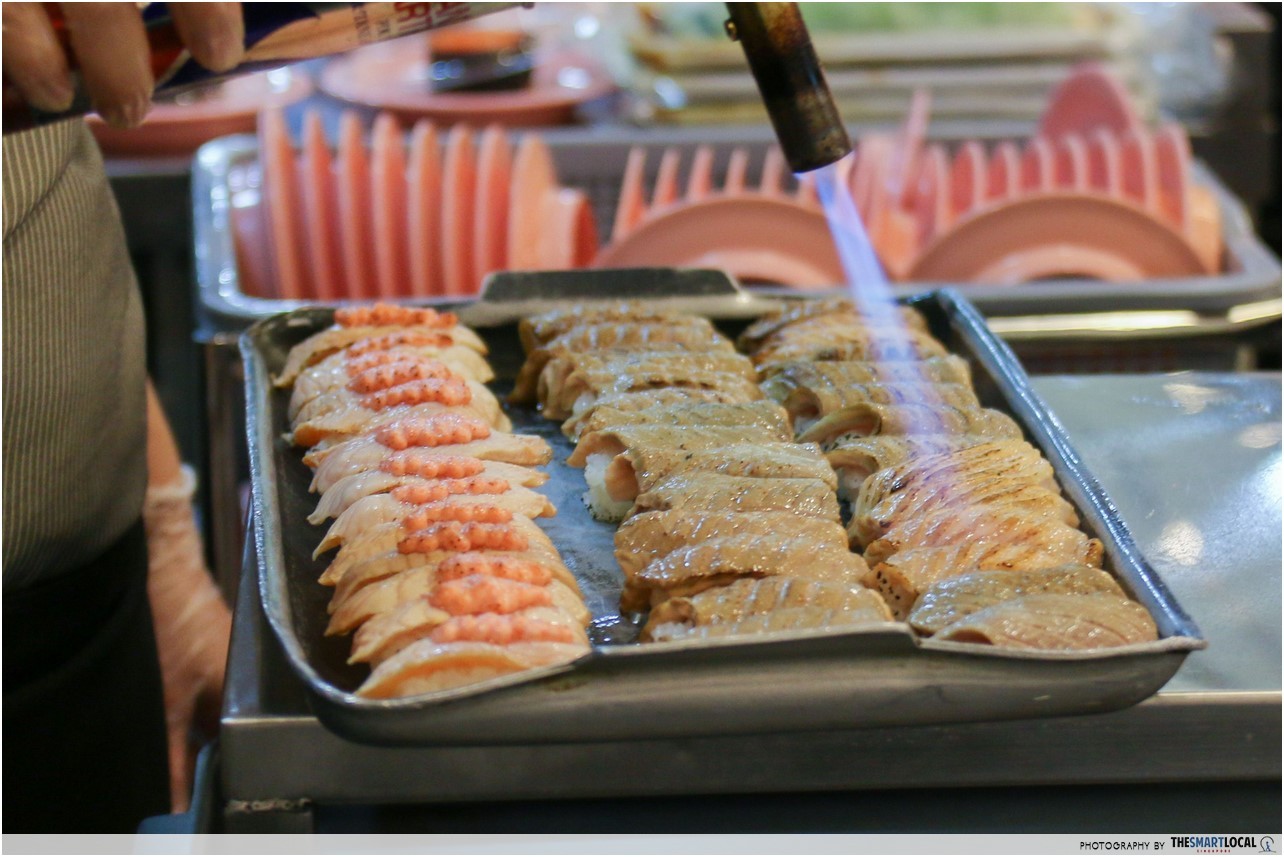 Aburi Mentai Salmon being torched in the preparation area

A crowd favourite is the Aburi Mentai Salmon and it always gets snapped up within seconds of entering the belt. Don’t fret, as you can make special requests for items that you don’t see on the belt and the chefs will prepare them on demand. Sushi express doesn’t provide a menu when you are seated, but its selection of more than 60 varieties can be found on a huge poster at the entrance of every store. 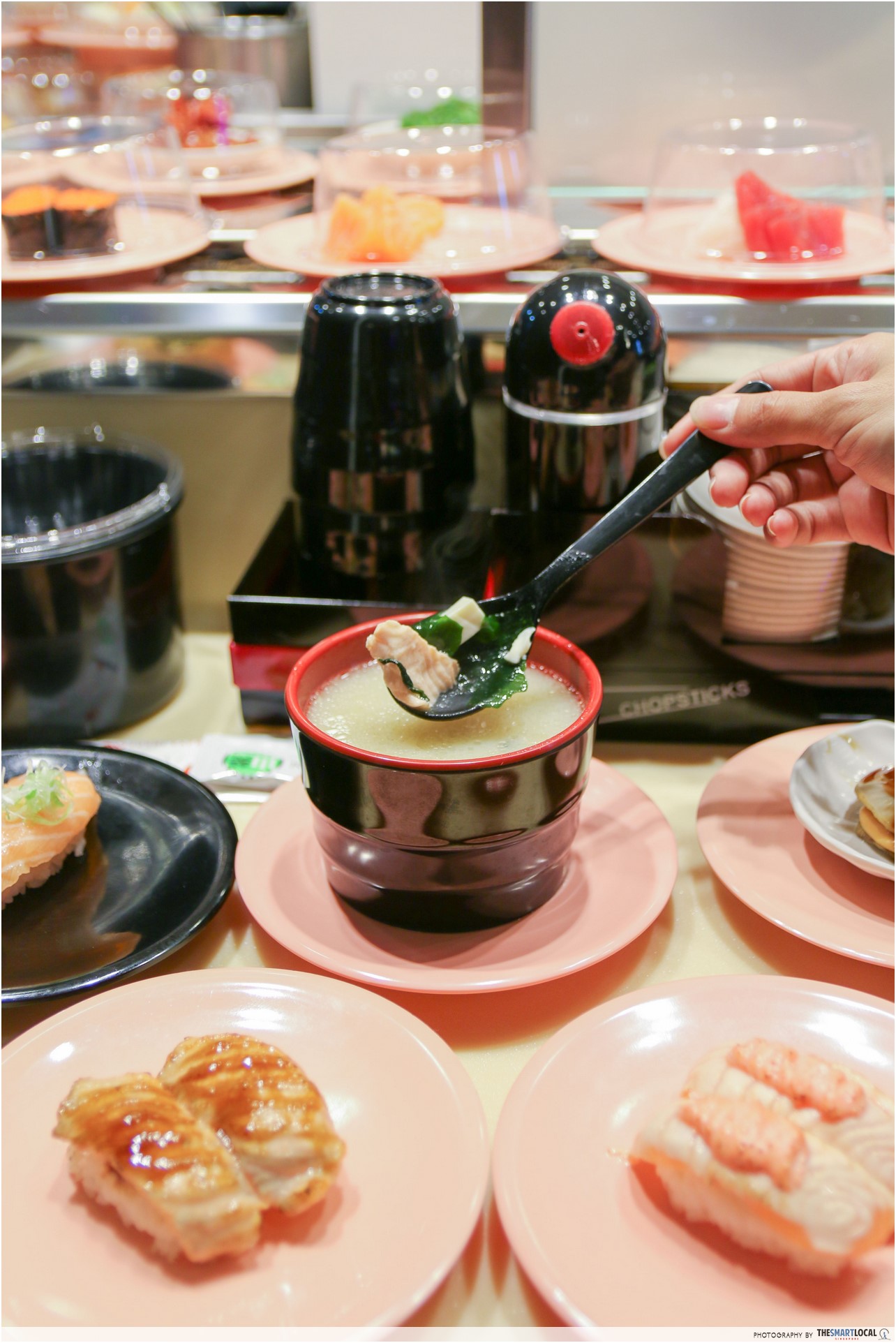 Another popular dish you hardly see on the belt is the Miso Soup with Salmon, also priced $1.50++. I normally don’t fancy miso soup, but this one was light and not too salty with generous salmon chunks inside. A big thumbs up!

At $1.50++, it’s hard not to doubt the freshness of the sushi. But after speaking to the chef, I’ve discovered that ingredients are freshly flown in – with ikura and scallops from Japan, and salmon from Norway. 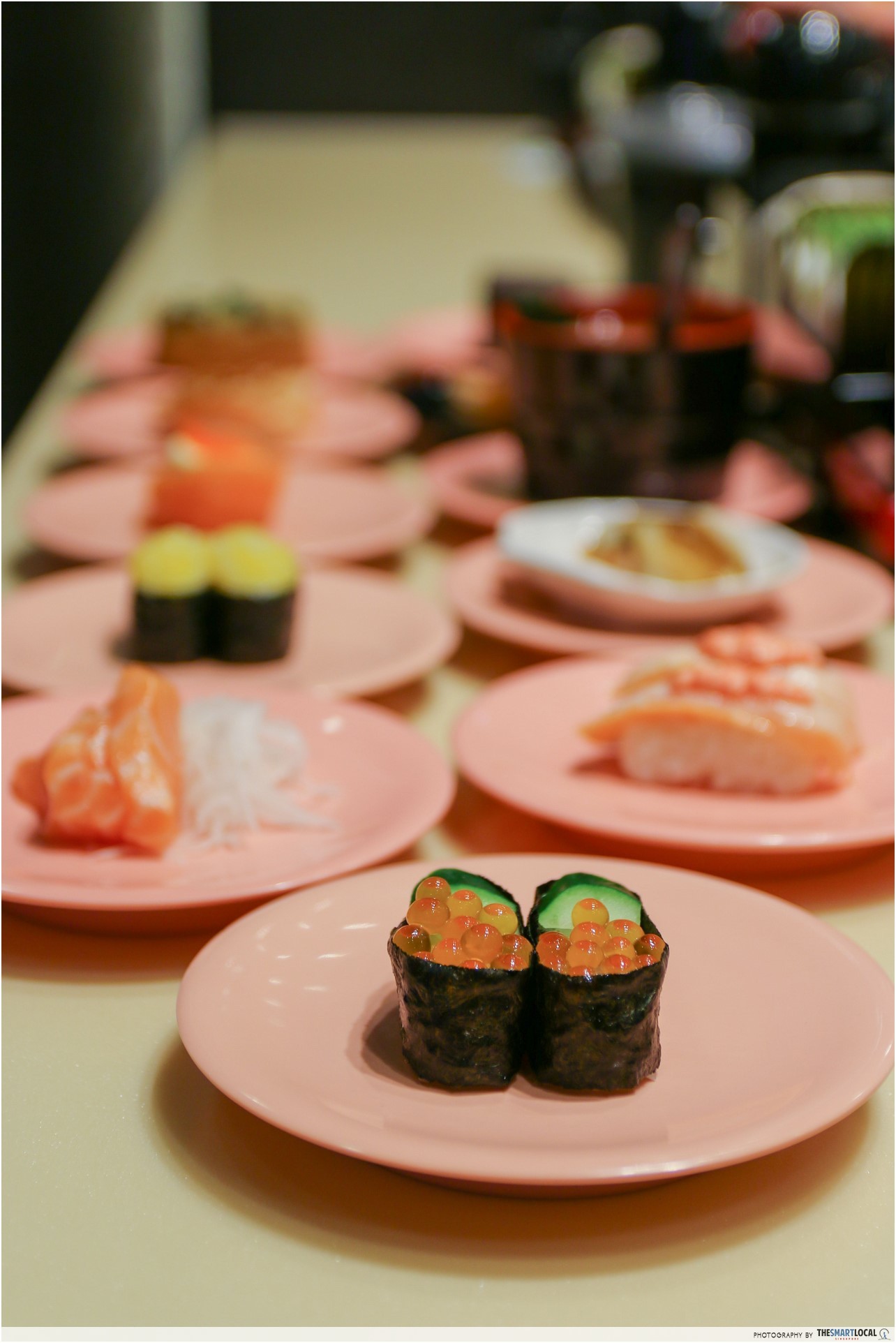 Salmon roe flown in from Japan 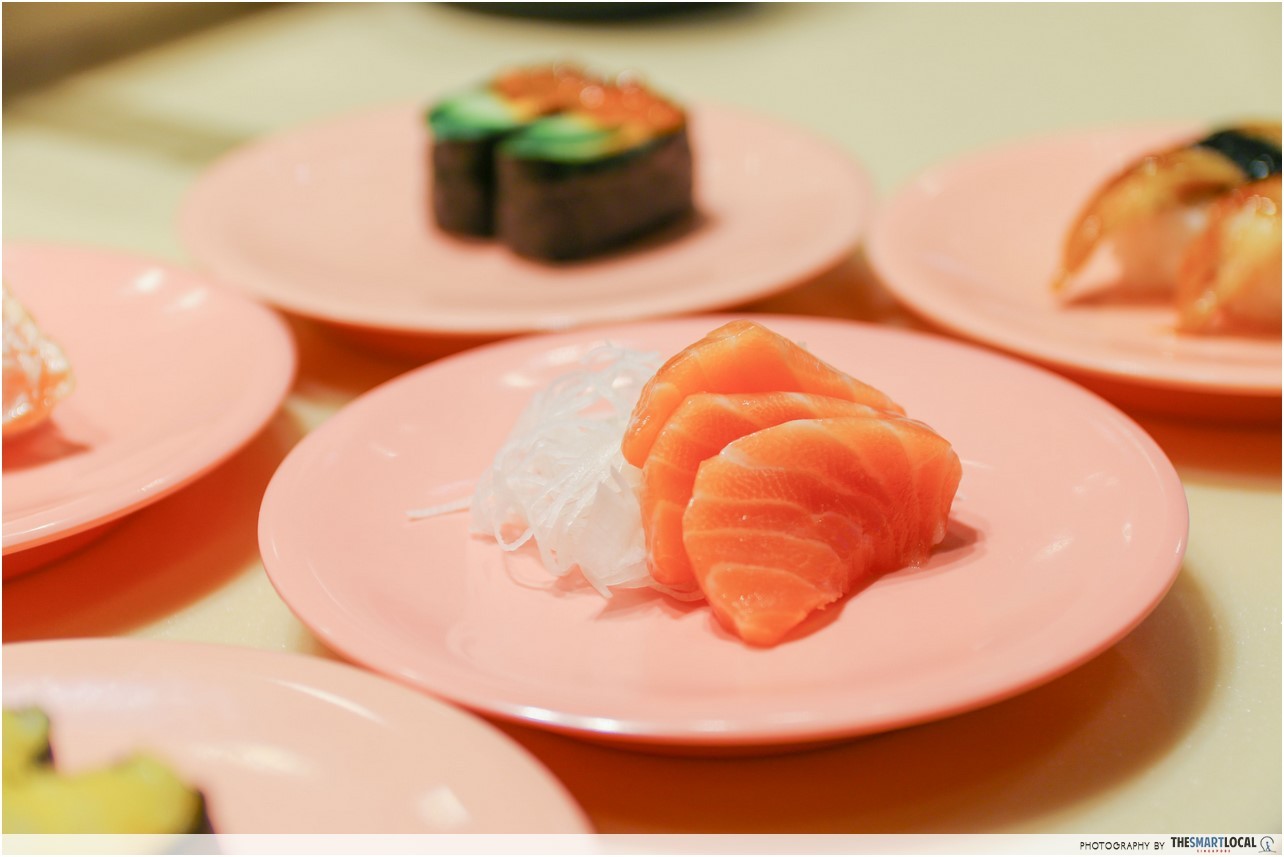 Imported all the way from Norway, around 100 kg of salmon is delivered to a single store on a daily basis. A routine check is carried out every other hour by a store manager to ensure that all the sushi you consume stays fresh. So you can trust that you’re in good hands.

5. It’s not from Japan, but Taiwan 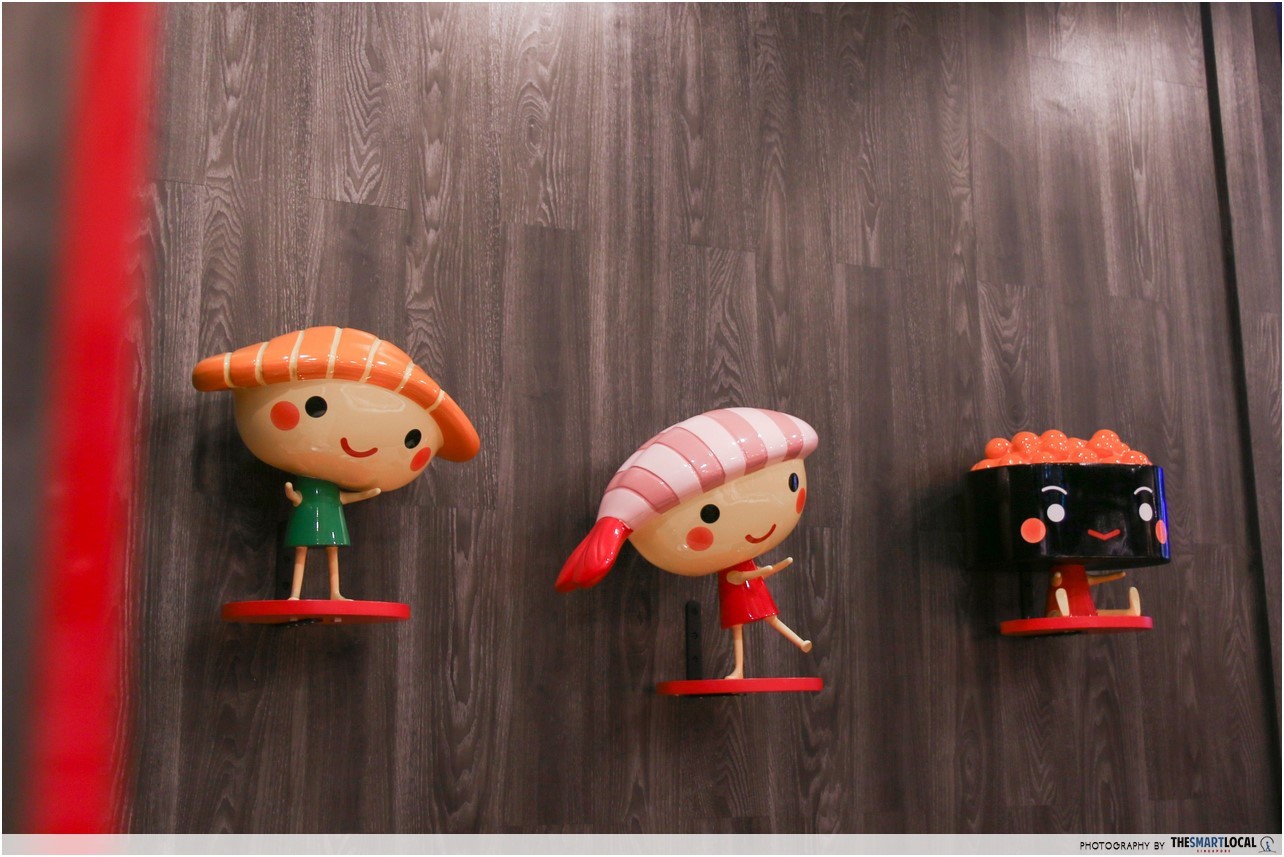 Founded in 1996 more than a decade ago, Sushi Express was born in Taiwan, not Japan. Bet you didn’t know that! It has since expanded to China, Hong Kong, Singapore, Thailand and America, with more than 300 outlets around the world. You won’t find it in Japan, although there will likely be a million other lookalikes. 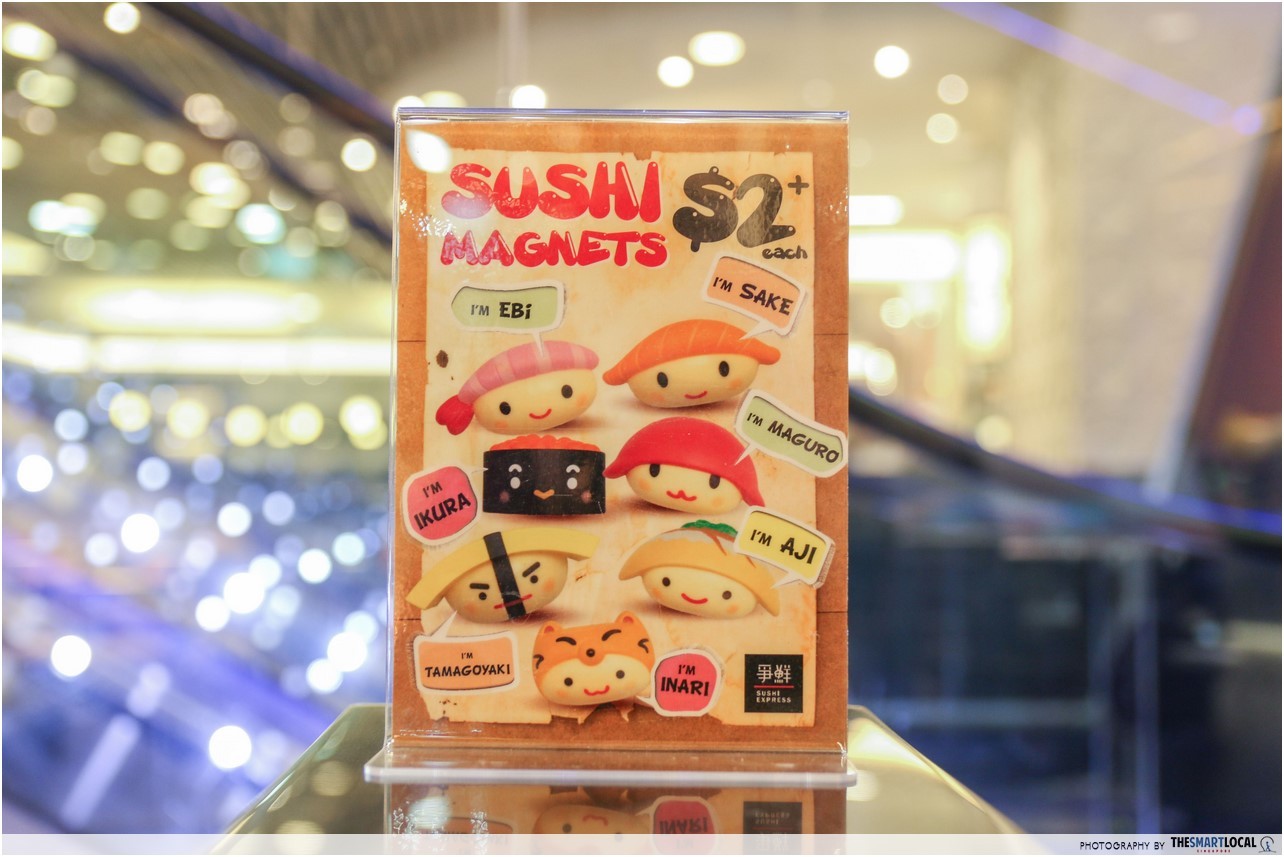 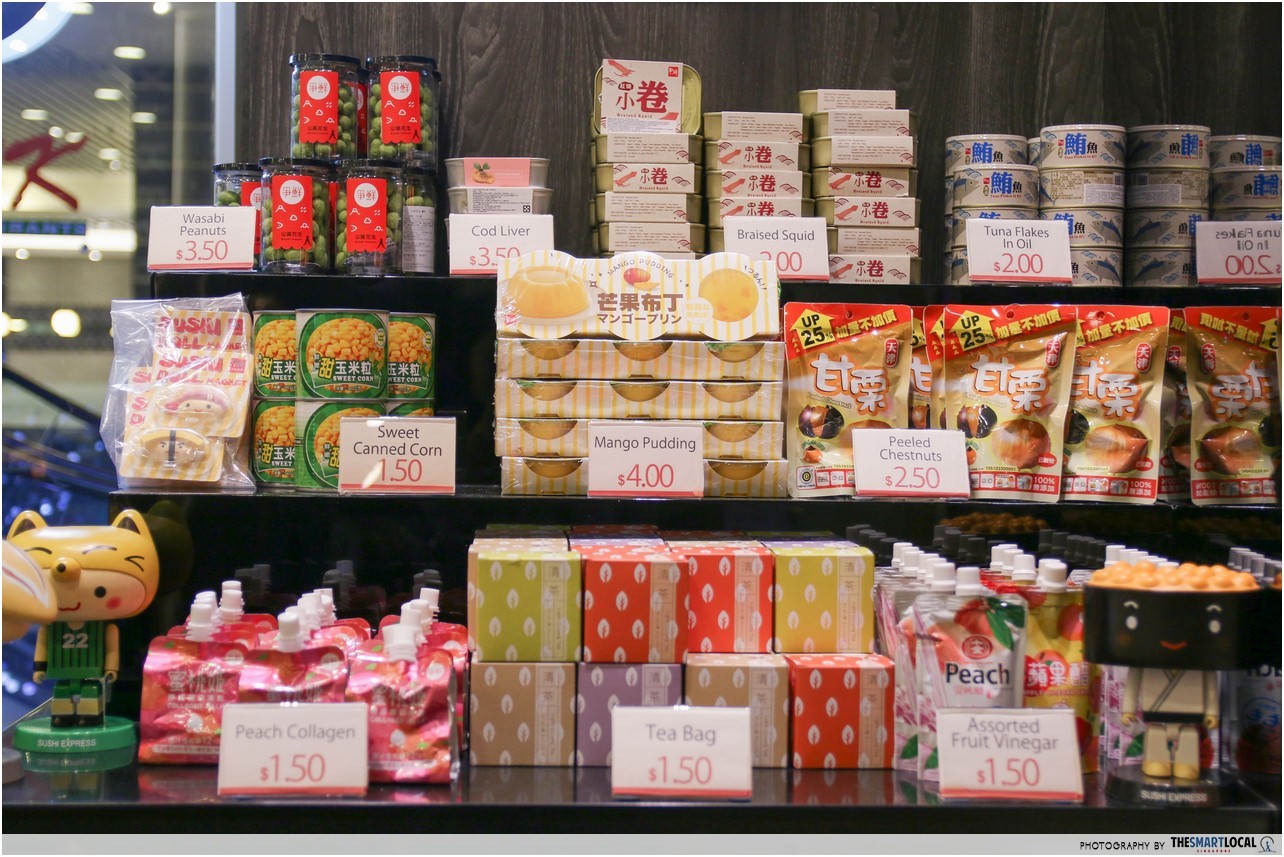 They just brought in adorable sushi mascots to spruce up the newly renovated outlet at 313@somerset. If you can’t resist taking them home, you’ll find them at Sushi Express’ very own ‘Mama shop’ that carries goodies such as sushi magnets, along with other super-value items like Oolong Tea Bags, Mango Pudding and Cod Liver. 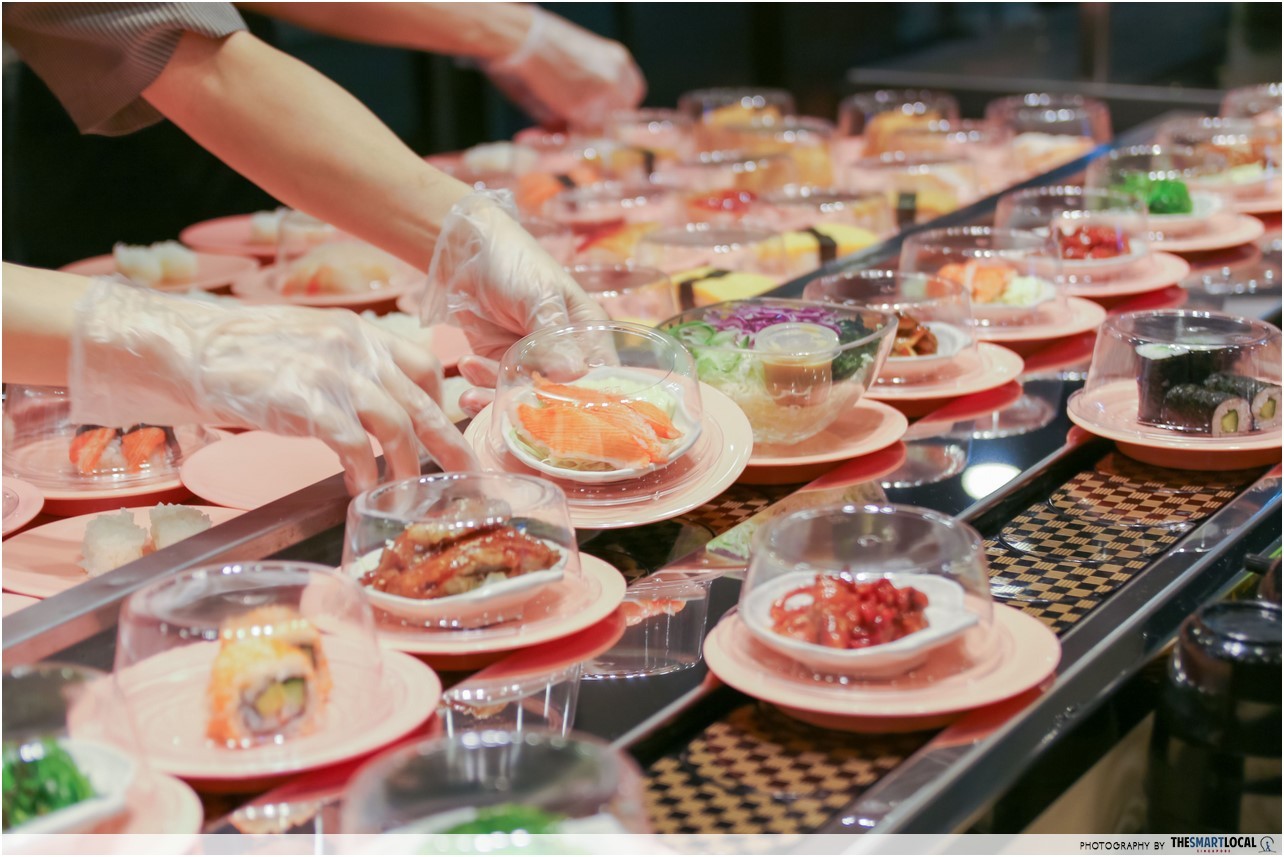 Sushi Express always has lines of customers coming in and out of the restaurant, such that you might wonder how they can churn up so many orders of sushi without The Flash on their side. Well, I finally found the answer after sneaking a peek into their kitchen during my escapade – sushi robots. 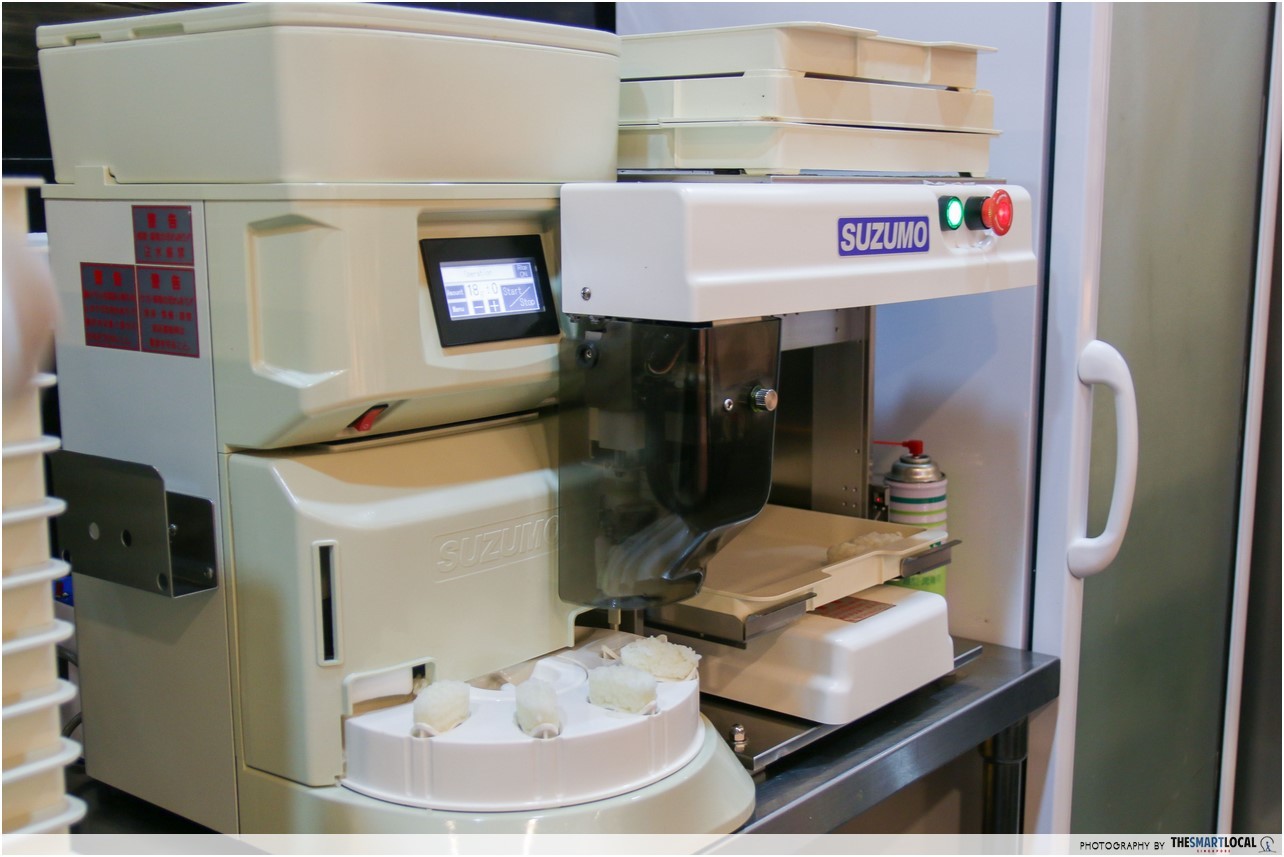 These magical rice-making machines create perfectly-pressed sushi rice balls within a split second. That’s a whole tray of 50 sushi rice in 50 seconds. Rest assured, this sushi robot doesn’t cut even a grain of rice when forming and brings efficiency to a whole new level beyond the speed of average humans.

7. There’s a piece of sushi hiding in their logo 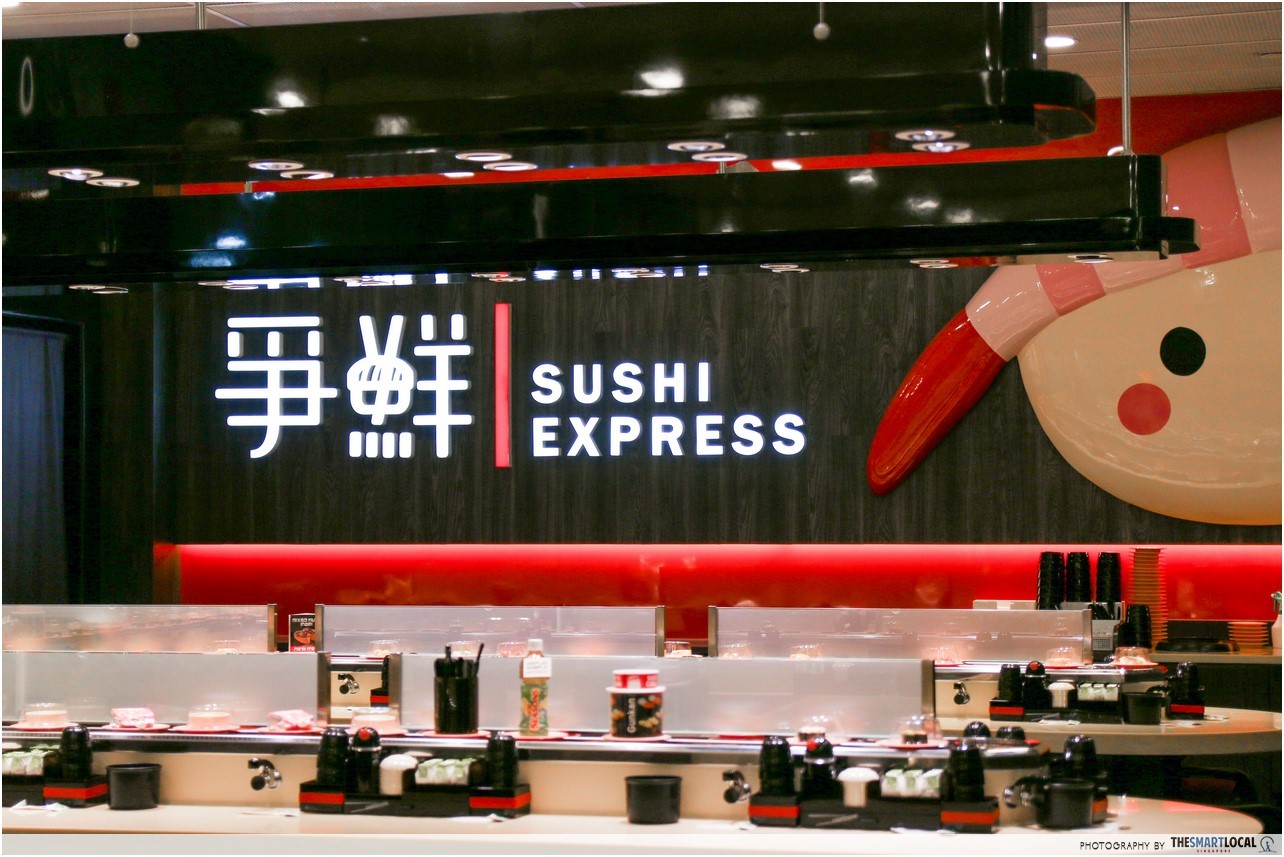 We see so many logos daily and can instantly recognize brands, but what often goes unnoticed are the cleverly hidden meanings behind some of them. Sushi Express is one of the smart ones. The name in Mandarin is a play on the words “vying for freshness” and, if you look closely enough, you’ll discover a piece of sushi concealed within the Chinese characters.

8. The MOST underrated item on the belt is their brownie 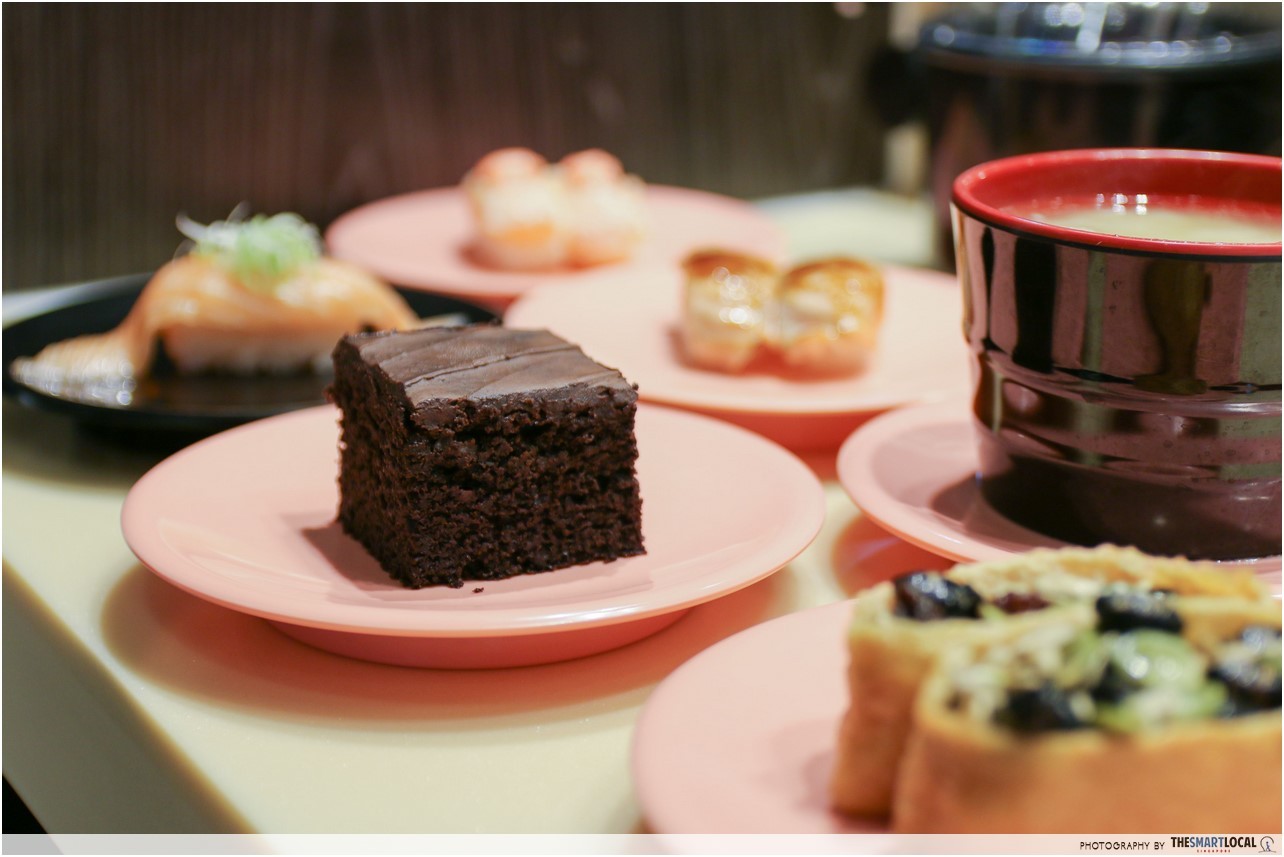 You don’t usually see brownies at sushi restaurants, and even if it was offered on the menu, you’d expect something right out of a packet filled with preservatives. But avid Sushi Express lovers will know that the Brownie is the most underrated item on the menu and surely something not to be missed. I gave this brownie a try, and boy was I shocked at how rich and moist it was!

Their other items like the Mango Pudding, Blueberry Cheesecake and Cream Puffs are also worth a taste, if like me, you always have a second stomach for desserts. It’s the perfect way to complete a full 3-course meal while on a budget.

9. You can go Dutch and split the bill with ease 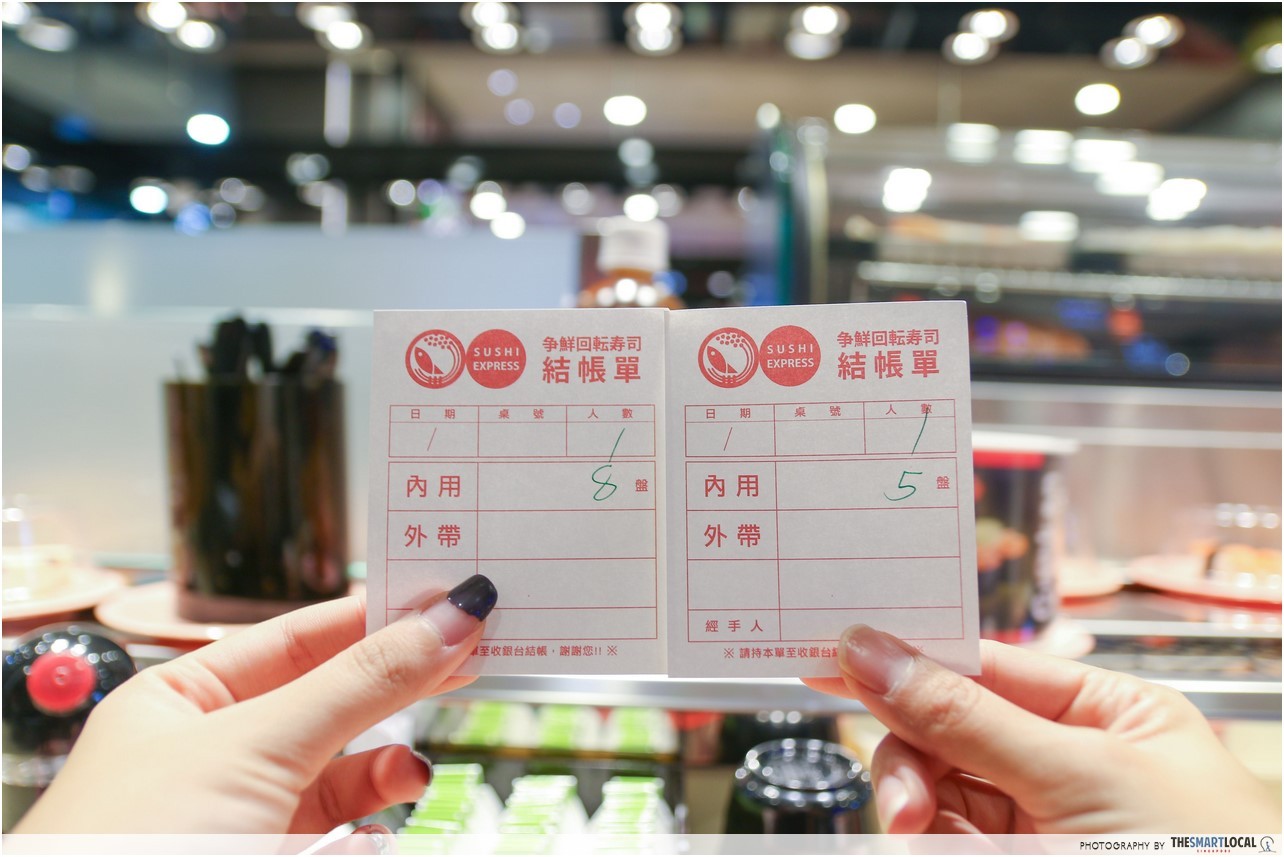 We all remember the time when the bill arrived at our last class gathering and we had to spend a tiring amount of time calculating the different amounts everyone had to pay. Well, you can say goodbye to mental sums and wasted time at Sushi Express, as they’re more than happy to help you split the bill. 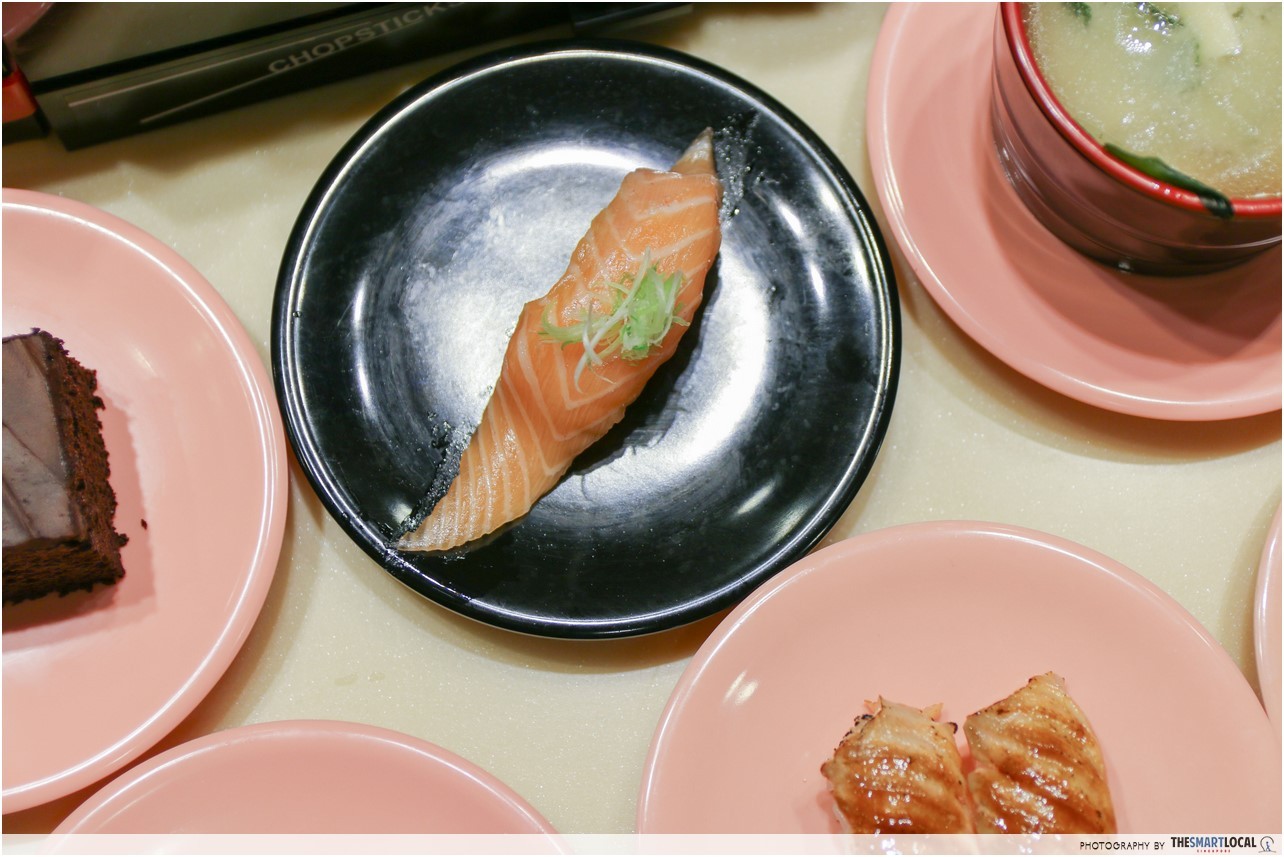 Rounding up the list is Sushi Express’ secret to being so cheap. It’s no wonder that it ultimately boils down to its huge quantity of sales and insanely fast turnover. With a unique selling point of $1.50++ for ALL items – yes, even the black plates – it has a continuous stream of customers flowing in throughout the day. You can pile up those plates at Sushi Express without worrying about accidentally ordering those special-coloured plates that leave you with an exorbitant bill. 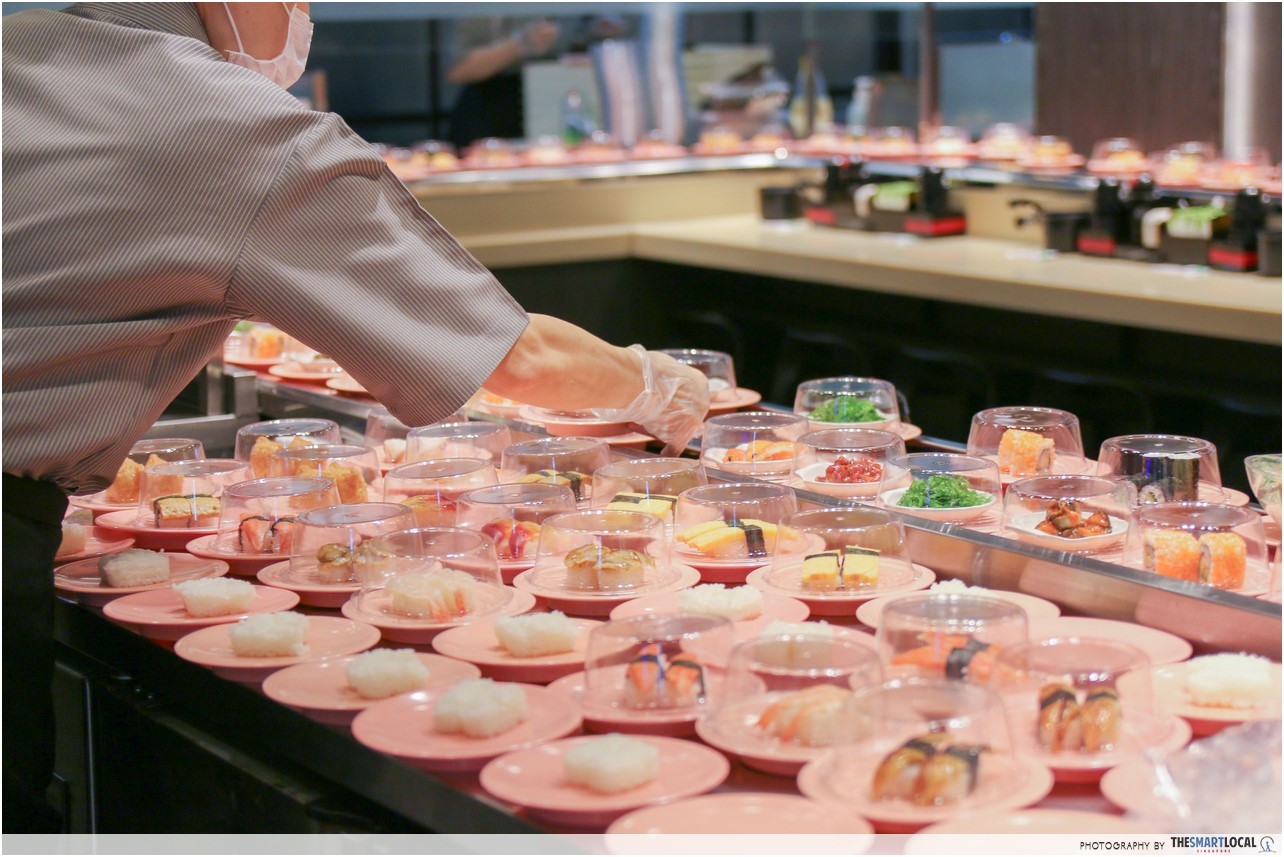 But you probably didn’t know that the 313@somerset outlet alone has 1,200 physical plates and more than 5,000 plates are sold on average in a single day. It’s only with such high volume of sales that Sushi Express can keep sushi affordable for all of us to indulge in. And still serve up free ginger, wasabi and tea.

Satisfy All Your Sashimi Cravings 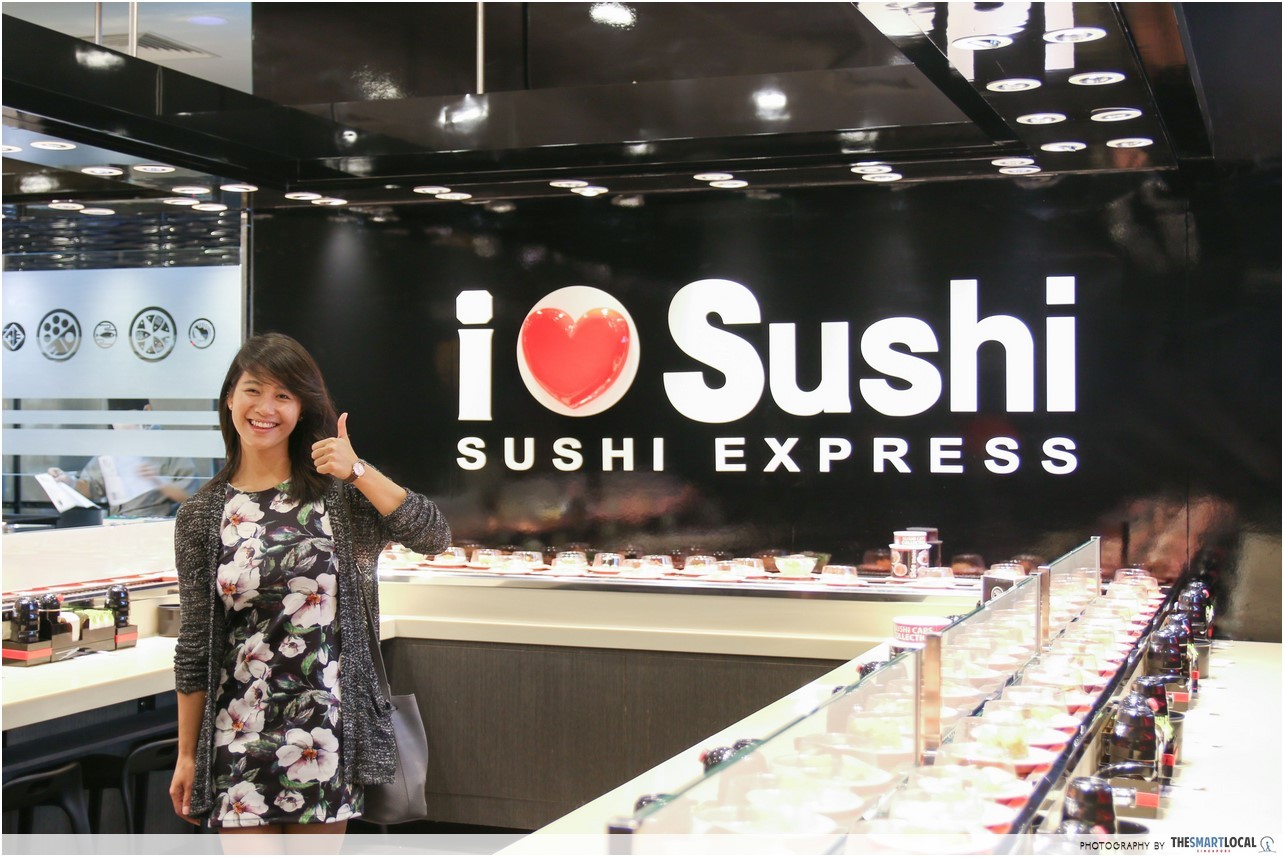 My visit to Sushi Express opened the world of cheap sushi to me, and so much more. I was impressed by the quality of sushi, which was decent and fresh, and I also loved their other side offerings. But beyond that, I saw a different side of the chain that showed it to be more than a cheap eat, but a restaurant with its own character and quirks. If you’re craving sushi but are tight on cash, Sushi Express is the clear choice!

Check out their Facebook page for more information on the 14 outlets around Singapore and get monthly updates on their seasonal specials.

This post was brought to you by Sushi Express.

If You Do One Of These 20 Things When Travelling, You May Be A Closet Hipster
AMRITSAR - The City You Can Live For Under $20 A Day Is Scoot's Latest...