Most mysterious happenings in Singapore 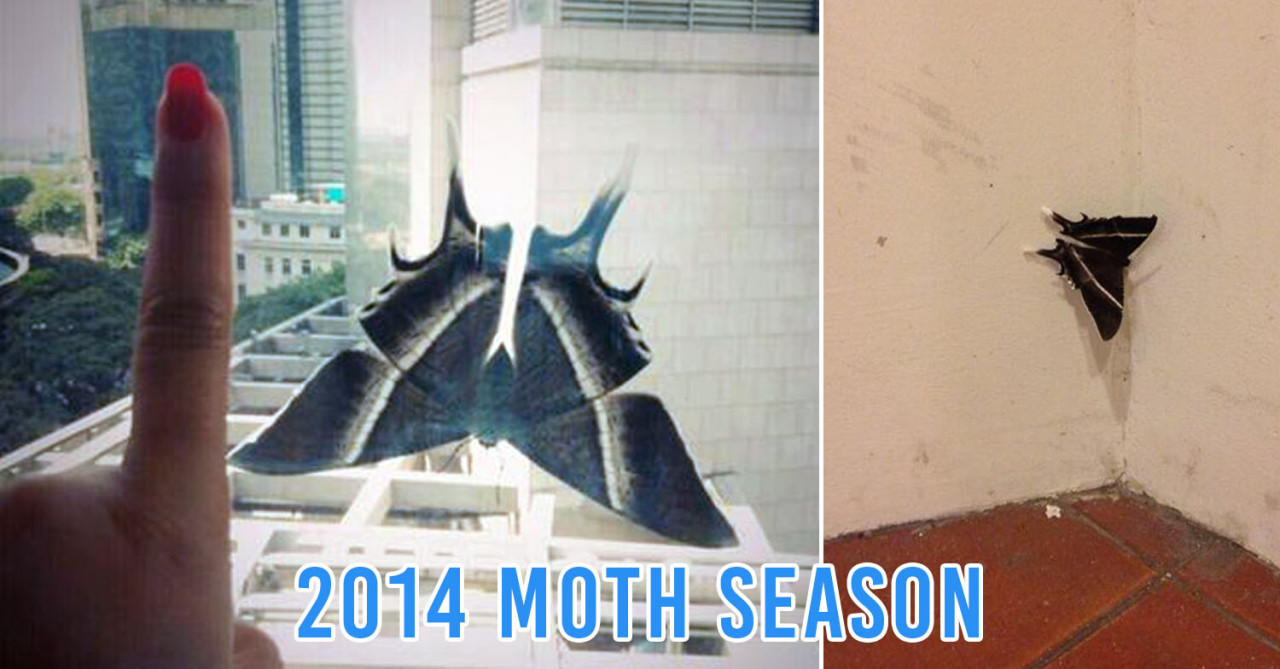 Adapted from @ladyxtel and @itscarlad

Most of us saw the paddle pop rainbow and pink sky recently, be it with our own eyes or through social media. For a country so lucky to avoid natural disasters due to our geographical location, we’ve still had our share of the abnormal popping up on our shores every now and then.

While I don’t lay claim to being an expert of phenomena and all things strange, I do have one trait synonymous with all Singaporeans: being a kaypoh. From things that will make you go ‘eww’ to sights you’ll marvel at with a ‘wahhh!’, here are 14 of the oddest occurrences that have happened on our tiny island – and their explanations.

Hide yo’ kids. Hide yo’ wives. Hide yo’ husbands. Everyone, just hide – got tornado coming!

At least that’s what some residents thought at first, when a giant waterspout was sighted off the East Coast in August 2016.

Waterspouts appear every now and then in tropical climates like ours, with vertical columns appearing over coastal waters connected to a cumuliform cloud.

Contrary to how they look, most waterspouts do not actually suck up water, but rather, are small and weak rotating columns of air over water – formed by wind currents at different elevations moving in various directions. According to the National Environment Agency (NEA), an average of three occurrences of waterspouts have been reported over Singapore waters yearly.

While they might look frightening from some angles, most of them are harmless, weakening and vanishing even before reaching the shore – though some do pose a threat to boats in the vicinity.

Tornadoes are more exciting, but meh, we’ll live with that. #safetyfirst

Drop, drop, drop like grapes Source (skip to 1:39 for the best interview ever)

We all remember the insane haze situation in 2013, with PSI levels reaching record highs of 401 on 21st June. But it wasn’t really that peculiar of an occurrence given how we all knew what – or who – caused it. *coughs*

But a more bizarre phenomenon happened during that same period, with hail falling down in the parts of western Singapore on 25th June, with ice cubes dropping in the Bukit Batok area purported to be as big as 50 cent coins.

Hail is usually caused by intense thunderstorms and the cooling of large water droplets. While hail is uncommon in tropical countries, Singapore actually experienced hail back in 2008 as well. NEA confirmed that the hail was not due to cloud seeding in nearby Indonesia, but did not rule out the possibility of it being related to the presence of fine haze particles in the sky.

P.S.: By far the most interesting outcome of this hail incident was this wonderful remix of that iconic “drop like grapes” interview.

Maybe they were filming for 2012. Source

Once again, this looks like something out of Independence Day rather than a segment on News 5 Tonight.

Sightings were reported from different parts of Singapore: from Eunos, Marina and even across the causeway, as a blazing ball of fire moved steadily towards Earth. We didn’t go into a state of emergency, but it did cause plenty of excitement among those who managed to catch it during the brief 15 minutes it appeared for.

According to the Astronomical Society of Singapore, the ball of fire seen blazing across the sky was neither a comet nor a meteor. Moving too fast, having no reflection of light and clearly “burning up”, the conclusion was that it could’ve been a distant jet. Heading downwards towards the West – the same direction as the setting sun – could also have caused it to shine extra brightly against the evening sky.

We couldn’t really find any additional information about it apart from this weird conspiracy theory site and a couple of YouTube videos. Singapore’s Defence Ministry also declined comment on whether there were any military activities during that time. Hmmm…

This frightening mass isn’t a cluster of a few specimens – it’s ONE creature on its own. Source

Part of “Pirates of the Caribbean” was filmed here, but we sure didn’t expect to see one of Davy Jones crew members wash up in a fisherman’s net. Angler Ramlan Saim caught this kraken-like creature just off the coasts of Pulau Ubin and released it after taking the video – which went viral worldwide. Now we’re wondering what other intriguing specimens lie under the sea.

This strange creature is called a basket star, a distant cousin of the starfish. The ones in Singapore are of the species Euryale aspersa, and can be found in some intertidal areas, clinging to seagrass or hiding under large corals and crevices.

Just when you thought you’ve seen it all, the clouds decide it’s time to do a little dance.

A guy was relaxing in his apartment when he noticed the strange pulsating clouds up in the sky, and shot this video using his smartphone – garnering over a million views.

No, it’s not a glitch in the Matrix. This is a Crown Flash, also known as a Jumping Sundog – caused by ice crystals in the clouds.

According to NASA, the electric field of a thundercloud – where ice crystals reflect sunlight – can be temporarily changed by lightning discharge. The new electric field quickly re-orients the geometric crystals to a new orientation that reflects sunlight differently, before returning to their original orientation when the old electric field is restored.

If you’re interested in Crown Flashes, here are several articles on them that make a pretty good read.

Chances are you’ll freak out at the sight of a single rat – so just imagine the horror of 300 of them scurrying around on a small plot of land. And this isn’t even in some abandoned forest – it’s right beside an MRT station. An MRT station that’s connected to a shopping mall, bus interchange and many rows of shophouses. Yikes.

This rat infestation stems from the indiscriminate feeding of stray animals. Several wild dogs patrol the vegetation just beside the MRT, and I have seen firsthand how some people walk up the slope and leave pieces of food for the dogs. Remnants are often left behind, transforming the area into the perfect breeding ground for the rodents seen above.

The #nofilter hashtag was never more apt than when Singapore’s evening sky turned into a pretty shade of pink just a few weeks ago on the 4th of February.

Apart from being an opportune moment to update social media feeds, others were left debating whether it was a sign of good things to come or just bad feng shui. IDK, man – whenever the sky turns red in my favourite cartoons, it doesn’t end well. *shrugs*

Okay, TV tropes are TV tropes. Rather than an ill omen, this is actually due to a natural process called scattering – where tiny particles of light are bounce off air molecules. Wavelength, time of day and laws of quantum mechanics all play key roles in determining the color of the sky.

On this occasion, dissipating rain clouds left behind a thin band of clouds, reflecting the reddish hues of sunset in the lower atmosphere. Larger air particles, which usually dull the sky colour, were also washed off in the preceding rain, creating the pinkish sky we saw.

8. Cloudy with a chance of sashimi

Like a scene from a B horror flick, Singapore was the location of fish rain way back in 1861.

In an account by French Naturalist and Ichthyologist (Fish Researcher) de Castelnau, he saw locals filling their baskets with fish – from pools formed by rain after a heavy storm. They were claiming that the fish had ‘fallen from heaven’. Scattering over an area of 50 acres, some of the fish were still alive!

One hypothesis for this is the occurrence of tornadic waterspouts. Small and light aquatic animals – like fish and frogs – are sucked up and brought to high altitudes, travelling great distances before falling back to earth. The tornadic waterspout probably occurred in a water body not too far from Singapore’s shores.

Strange as it sounds, this has actually occurred quite a few times recently, with incidents in Ethiopia and India just last year.

A phenomenon that’s familiar to most Singaporeans that live in a HDB apartment, the uncanny sound of marbles dropping has left many wondering if they’ve lost theirs – is your house haunted? Or is your neighbor’s house haunted?

But unless there really are ghosts living in the ceilings of most of our homes, this occurrence is far too widespread to be of the supernatural kind.

There are several possible explanations for the mystery, from the mosquito trap mechanism found in some toilets to water hammering in water supply pipes caused by prolonged period of no water activity. Some have even claimed it is due to the contraction of those pipes, especially during the drastic changes in weather and temperatures every now and then.

In what looked like Thor going back to Asgard, this splash of colour in the sky – similar to that of our favourite childhood ice cream – sure excited many Singaporeans.

Initially labelled by media reports and excited netizens as a Fire Rainbow – caused by sunlight passing through cirrus clouds at high altitudes – a statement was later released by the Meteorological Service Singapore (MSS) disproving such claims.

Apart from the sun not being angled from the horizon at the 58 degrees required for a Fire Rainbow to occur, the clouds seen were also cumulus clouds and not the thin and wispy cirrus ones.

An actual Fire Rainbow spotted in Scottsdale, Arizona in 2009 Source

What many Singaporeans saw on 20th February this year was actually an iridescent cloud, which was emitting bright hues due to diffracted sunlight around cloud water droplets, according to Assistant Professor Winston Chow.

But to the layman, “Aiya, got see can liao.”

Our MRTs are world class. Even the moths want a ride. Source

There was a period in 2014 where these guys were EVERYWHERE, from classrooms to bedrooms. Even our beloved ‘reserved’ seats on the MRT were not spared. You know how some believe moths are the spirits of our loved ones visiting us? Dun-dun-duuun.

Lyssa Zampa – also known as the tropical Swallowtail Moth – is native to Singapore. Present all year round, they are more commonly seen between May and August, due to the bird migration season being from September to March – with fewer of their predators around, they’re given more license to roam about.

Another reason for the sudden proliferation of this species is the mass flowering of trees all over Singapore during that same period – including the rubber tree, which is what these moths’ caterpillars feed on.

Every year, thousands flock to Japan to be a part of their cherry blossoms festivals. Hanami (cherry blossom viewing) in the Land of the Rising Sun is an experience worthy of any bucket list, but we were lucky enough to have our very own “sakura season” here back in April 2014!

While the occasional flowering of trees happen every year, it was particularly special that year, with many of the country’s trees in full bloom at the same time.

Rainfall after what was Singapore’s longest dry spell was the main reason for the ‘cherry blossoms’ that we got to see. The sakura tree look-alikes are actually a neotropical species called Tabebuia rosea, also known as “trumpet trees” or “pink poui”.

Weird and wacky, pretty yet freaky

Disclaimer: I am no Professor of Environmental Studies. I am a 22-year-old guy who hasn’t even figured out his life. Explanations given are derived from hours of snooping on the internet.

There’s so much in this our world that we don’t know about, and nobody knows when or what the next strange occurrence might be. But all I can say is that I feel blessed living in Singapore – where our main complaints are “wah, so hot” and “sian, why everyday also rain”. And where most bizzare occurrences are just another chance to update our social media feeds.