With its universe of adorable droids, sleek starships and shimmering lightsabers, Star Wars has captivated generations of fans and devotees. To relive its many sci-fi space adventures, you won’t have to head to a galaxy far, far away – STAR WARS™ Identities: The Exhibition has just arrived in Singapore, bringing close to 200 original props, costumes and artworks to our shores.

On its last stop of an international tour, the exhibition at the ArtScience Museum traces the 40-year long history of Star Wars. This exhibition will appeal to fans young and old – whether you’re still reeling from Darth Vader’s unforgettable “I am your father” reveal or plain obsessed with BB-8 and Baby Yoda.

Update: Star Wars Identities: The Exhibition has been extended to 25th July 2021

View original props and models used in the movies 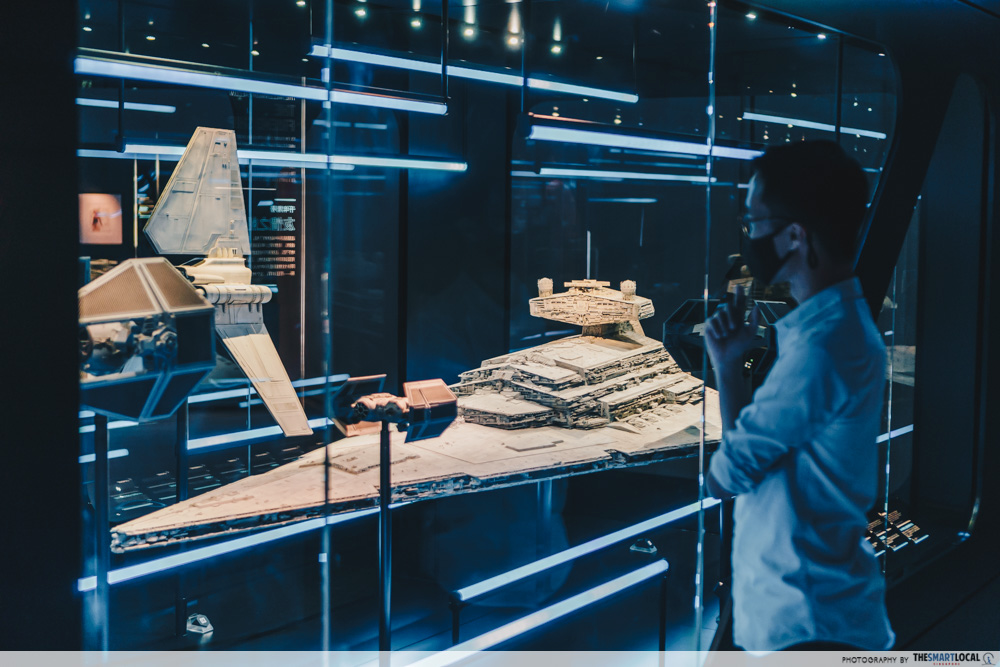 Created before advanced CGI tech, the many fantastical aliens, metallic droids and vast spaceships in the Star Wars movies were filmed with actual mockups. Boasting close to 200 props, models and costumes used on-screen, the Star Wars Identities exhibition lets you appreciate the detail and craftsmanship of your favourite characters, gadgets and vehicles from close up. 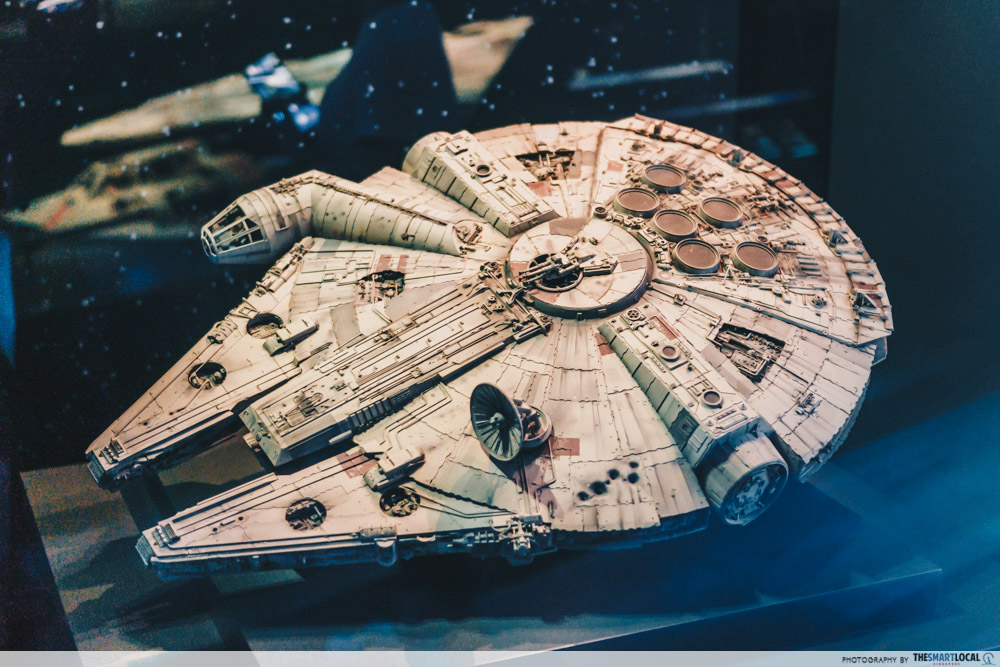 From extremely-detailed models of massive starships like the wedge-shaped Star Destroyers and bulbous Mon Calamari Star Cruisers, you’ll also get to view truly iconic starfighters like the Millennium Falcon and Tie Fighter. Fans of the original trilogy will also be thrilled by the models of AT-AT walkers that attacked the rebels on the icy planet of Hoth. 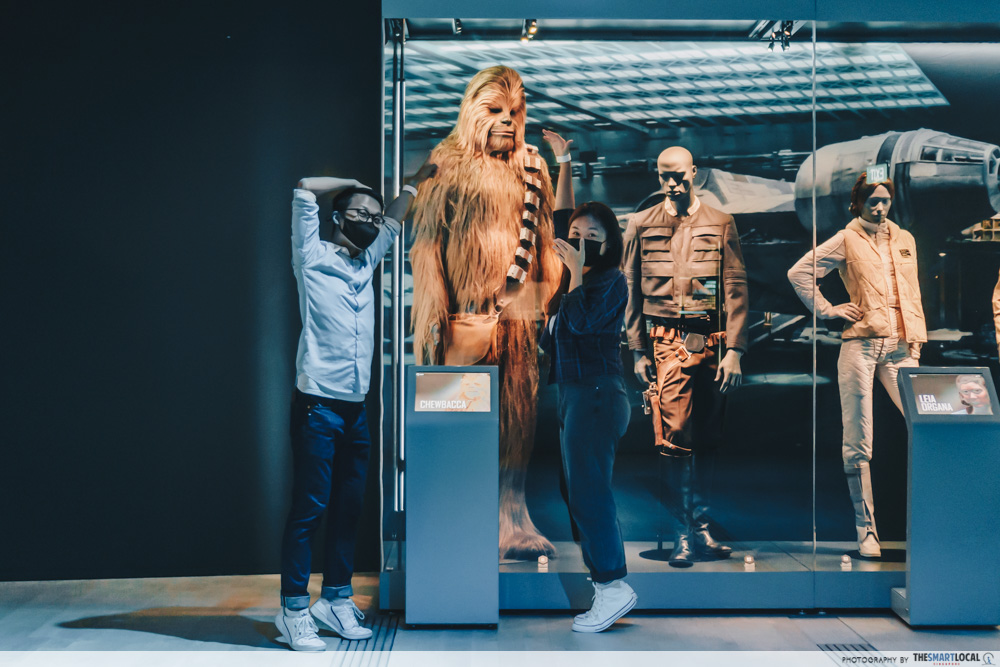 The towering Chewbacca costume that was worn by actor Peter Mayhew, who was 2.2M tall in real life.

While the instantly-recognisable spaceships of Star Wars thrilled audiences with tales of faster-than-light travel to other planets, the myriad characters of the series have gone on to inspire audiences of all ages. 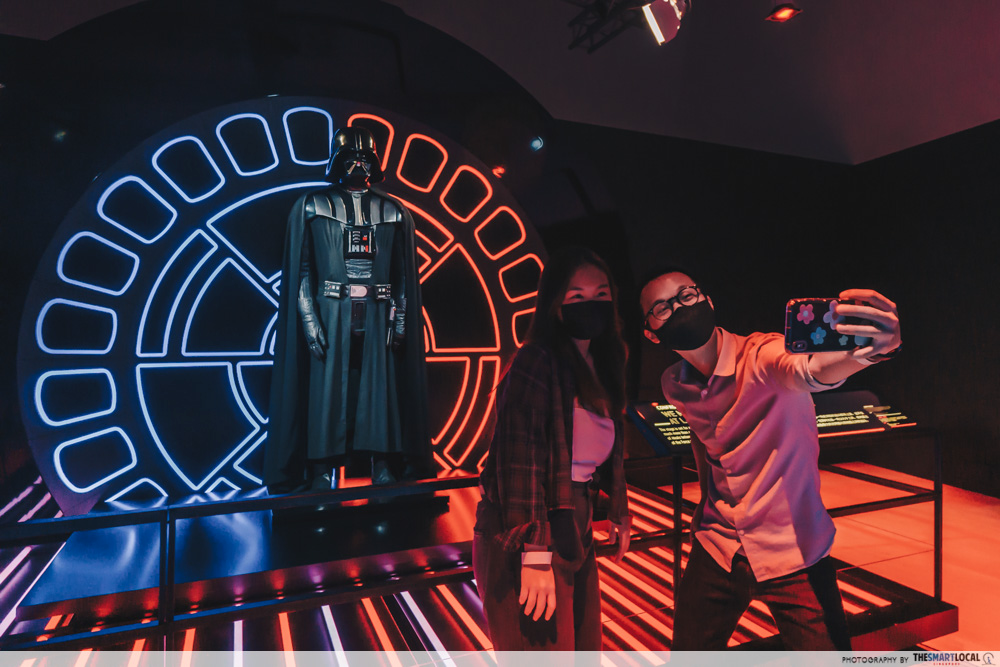 At Star Wars Identities, you’ll get to view movie-authentic costumes – from Padme Amidala’s intricate royal fashionista get-ups to the awe-inspiring T-visor of Boba Fett’s actual armour. With the impressive collection of Stormtrooper armour on display, see if you can spot tiny differences in design between each episode from “A New Hope” to “The Force Awakens”! 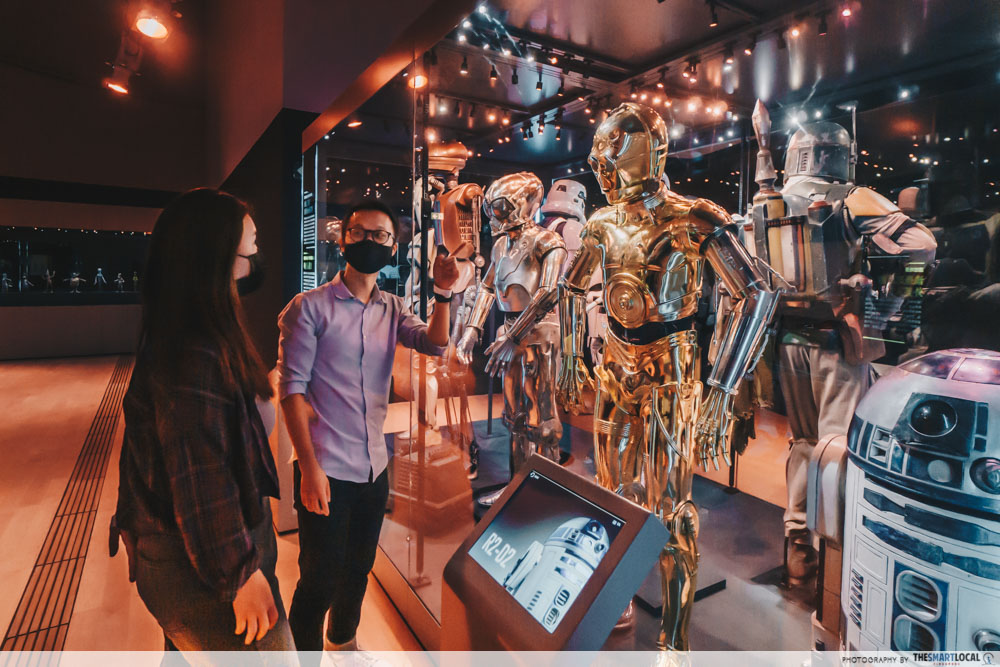 Be inspired by original concept artwork 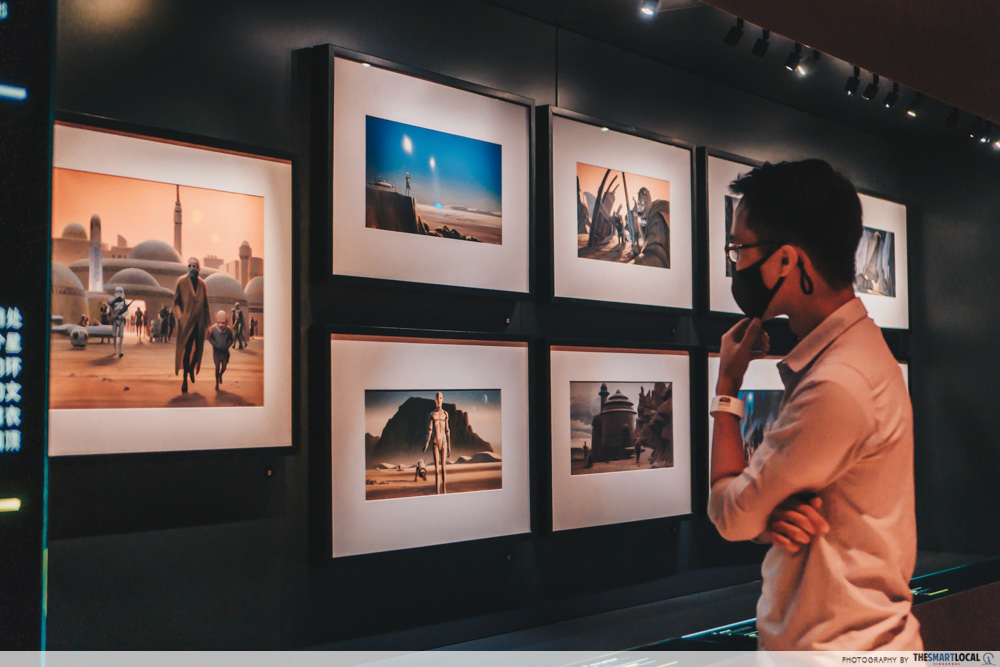 Be sure to check out the showcase of Ralph McQuarrie illustrations – the earliest concept art of the Star Wars series that helped director George Lucas win approval from 20th Century Fox.

Fan or not, say Darth Vader, C3PO or R2D2, and the likeness of these instantly-recognisable characters immediately spring to mind. Scattered among the various exhibits are snippets of original concept artworks by designers and illustrators as they brought our favourite characters to fruition.

You’ll get a sneak peek into those creative minds as you uncover Yoda’s secret past life as an Einstein-inspired garden gnome, along with the samurai roots of Vader’s now-iconic helmet and visor. 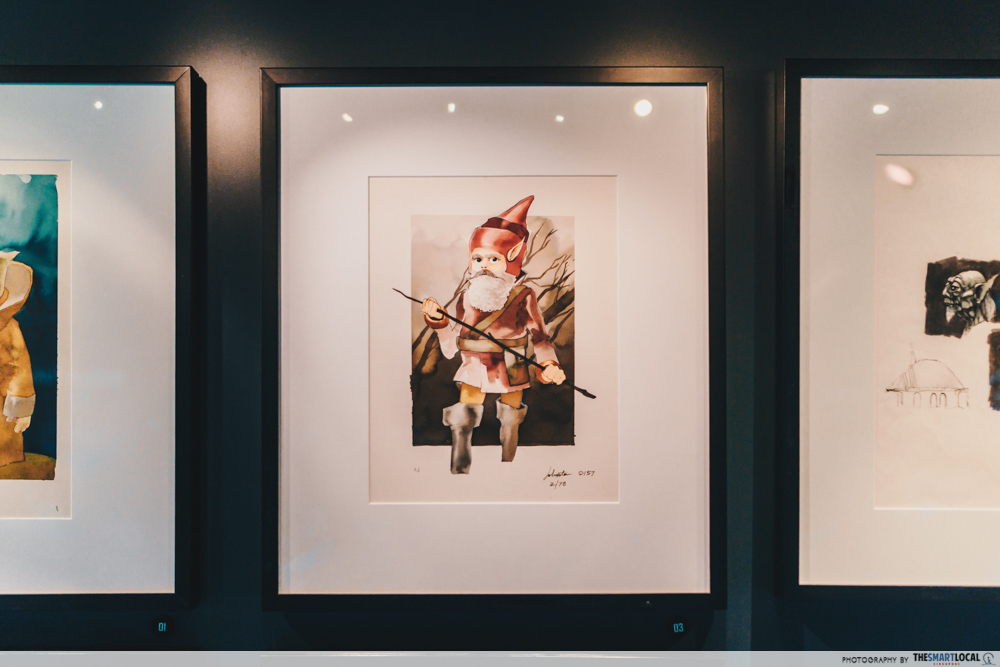 Find out your Star Wars Identity by completing a quiz 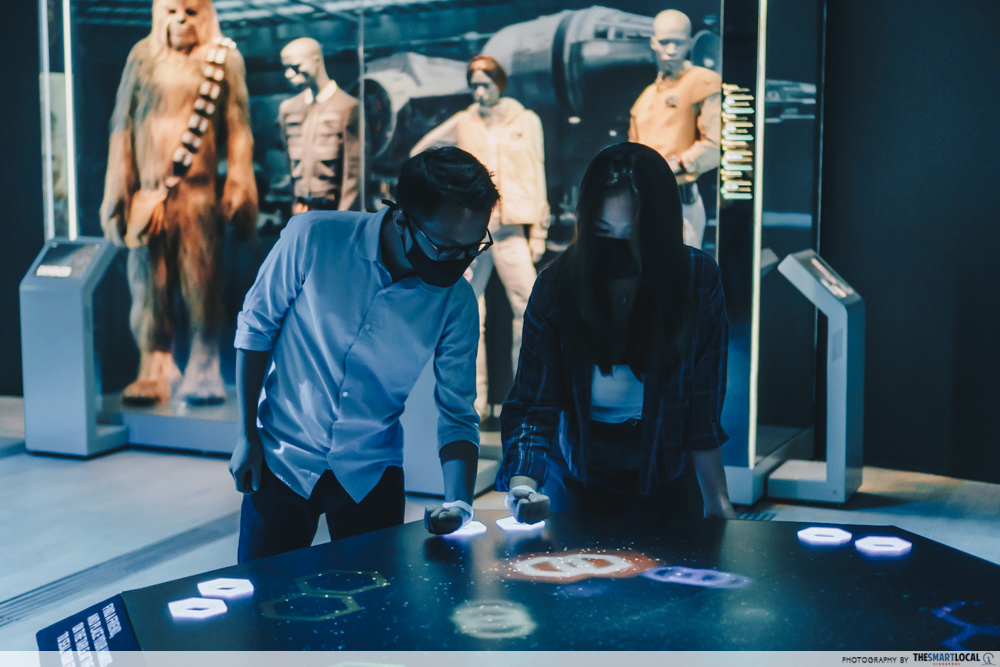 Generations who grew up obsessed with the Star Wars franchise dreamt of having the Force: the mystical power to move objects, read minds and even to shoot bolts of lightning from one’s fingertips. Alongside the artefacts and artworks from the movie, visitors will get to chart their own course in the Star Wars universe – and eventually pick between the Dark Side or the Light. 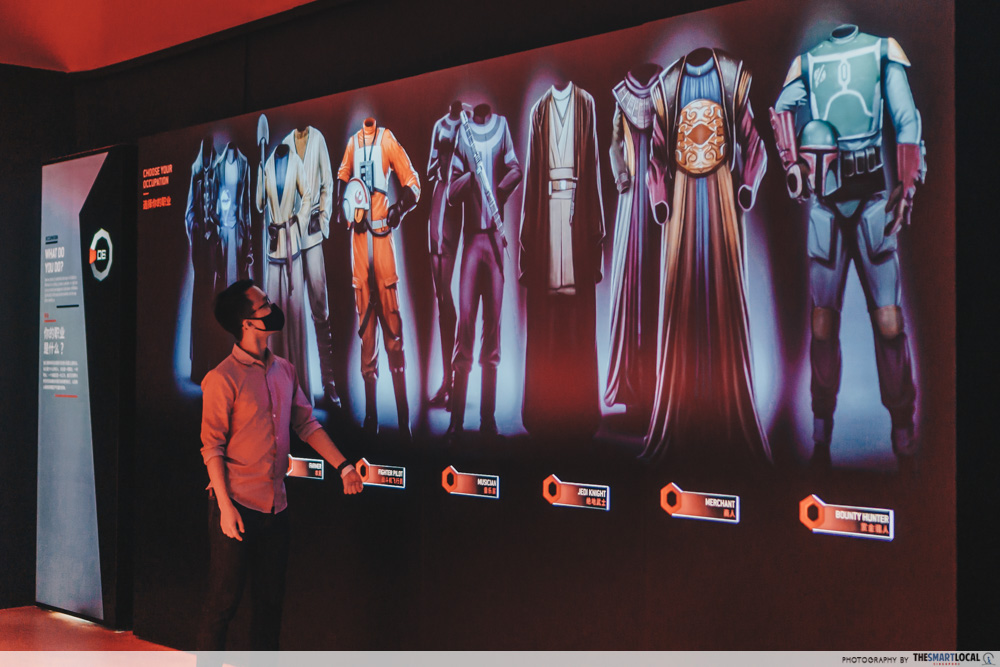 Throughout the exhibition, you can scan your wristband at interactive stations to find out what life in the Star Wars universe would be like. Along the way, you’ll make choices and complete quizzes to slowly shape your Star Wars Identity. No worry if you’ve picked rashly – you can always backtrack to redo the quiz so you have the character that best resembles you. 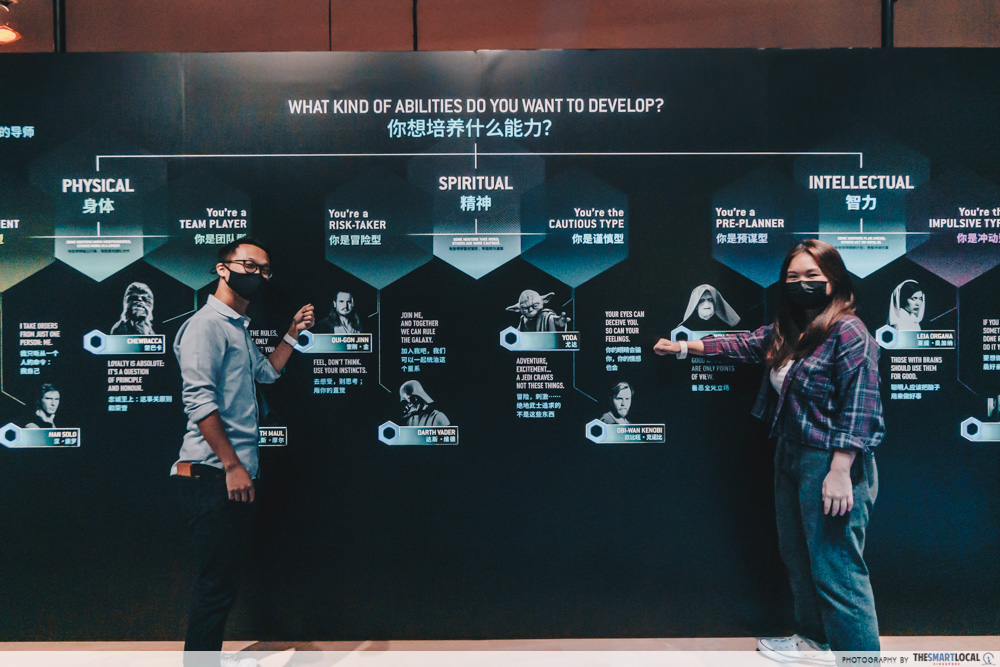 Select your species by taking after the awkward Jar Jar Binks as a Gungan, or channel your inner Darth Maul as a menacing Dathomorian. But we all know that Ewoks reign supreme – cute and furry on the outside but savage and cunning within. You’ll also get to pick other aspects of your character – like your planet of origin and occupation. 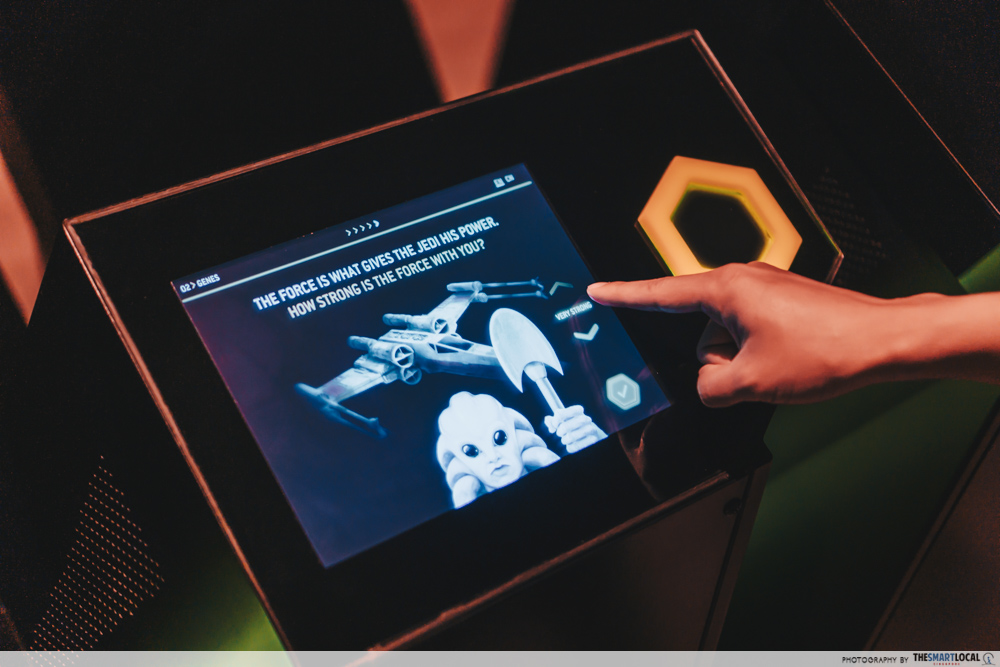 You’ll have to make some tough choices here as you answer questions scientifically designed to pick apart your true identity. This all culminates at the finale – where you’ll get to pick either the path of a Jedi or a Sith and seal your fate. 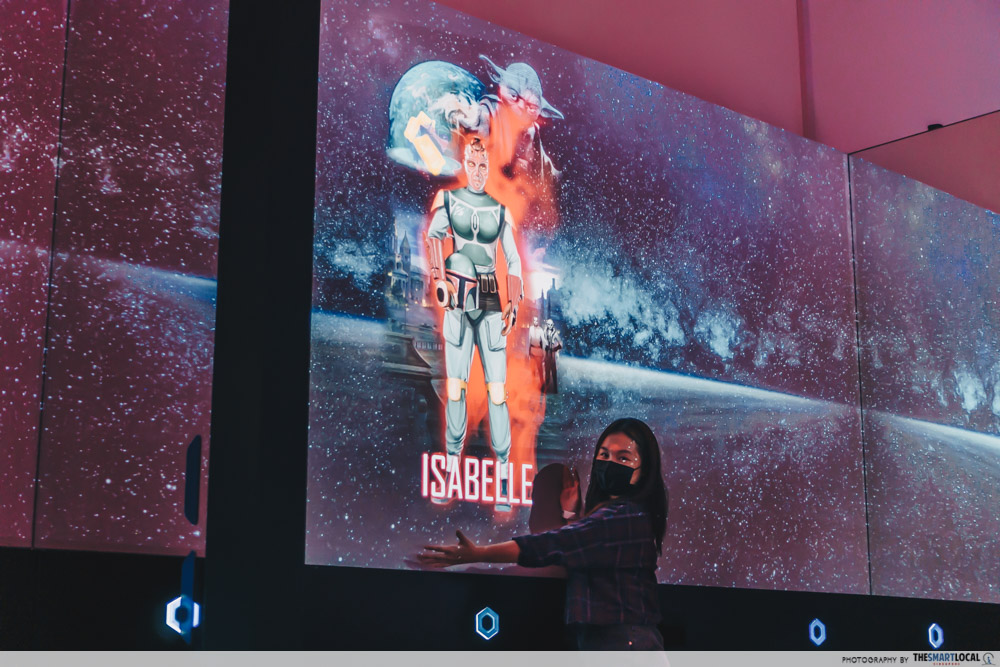 The final result includes images of key influences that shaped your identity – including your birth planet, role model and friends.

Prep your phones for the dramatic reveal at the exit, as you scan your wristbands for the last time to conjure a hologram of your very own Star Wars character.

Discover which Star Wars character you are at ArtScience Museum 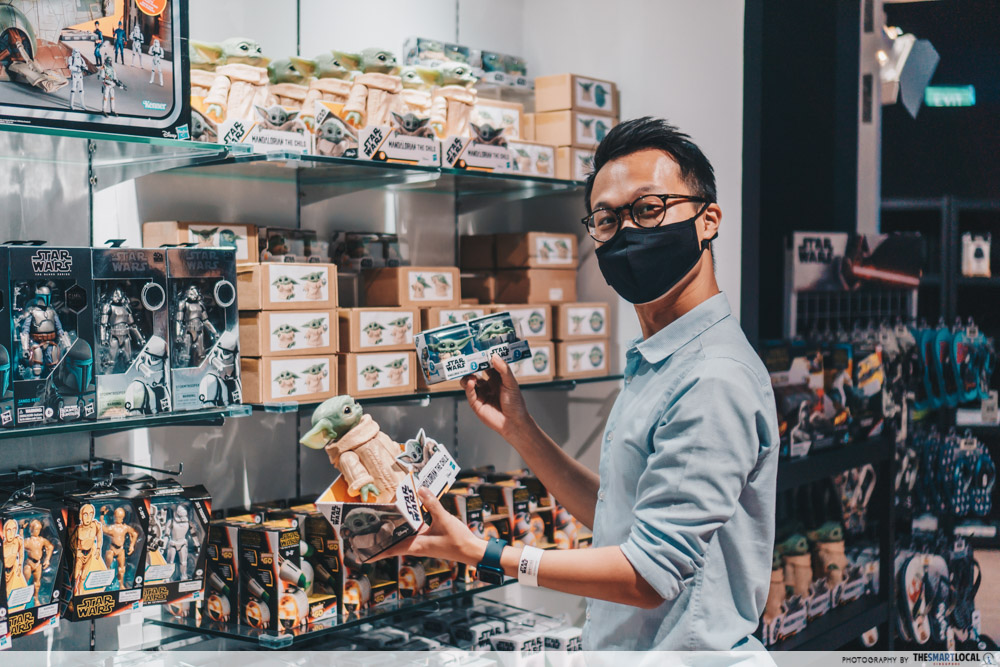 You’ll have the chance to purchase exclusive Star Wars merch – like these adorable Baby Yoda figurines (from $29.90).

Whether you’ve last caught Star Wars in wide-eyed wonder decades ago, or are a die-hard fan who has voraciously binged on every movie, spinoff and novel, Star Wars Identities is a surefire way to ignite your imagination once again. 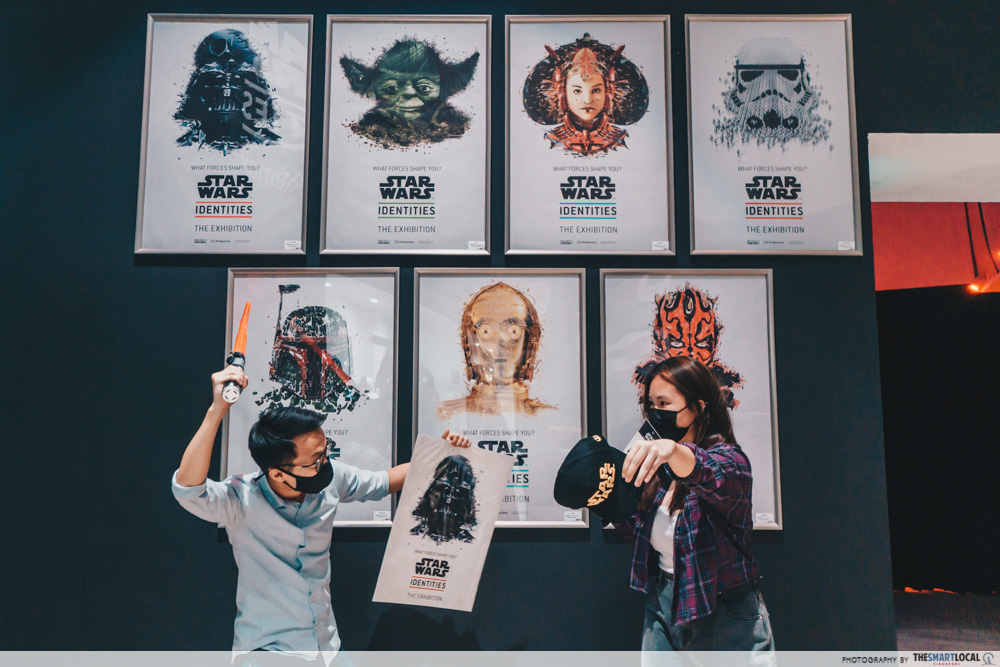 Not only is it a rare opportunity to view actual props and artefacts used in the filming of this cultural phenomenon, you’ll also get a peek at the drawing boards of the artists who breathed life into the characters we know and love today.

Star Wars Identities: The Exhibition will be held at ArtScience Museum till 25th July 2021. Tickets are priced at $25/adult and $20 for children aged 12 and under, seniors 65 and over, and for persons with disabilities.

This post was brought to you by STAR WARS™ Identities: The Exhibition.
Photography by Huiwen Chan. 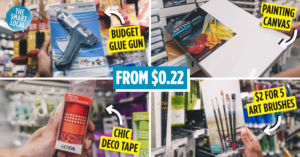 20 Things To Buy At Art Friend For All Your Sketching, Painting & Artsy Needs
I Gave Up A HIIT Session For A 30-Minute Body Contouring Treatment To Get Abs 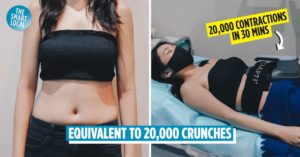