Parents of children with special needs

We know parenting is tough. Being responsible for someone’s life is no easy feat when you have their physical, emotional, mental and even spiritual needs to look out for.

But it may be even tougher for parents of children with special needs. Dealing with countless tests and sometimes stares from unkind strangers can put a toll on those who just want the best for their kids. Here’s what these five parents want others to know about having a child with special needs:

My son, Elias, has a chromosomal anomaly that has caused his corpus callosum, or the fibres connecting the brain’s two hemispheres, to be missing. This has resulted in delays in his physical, cognitive and oral development.

Our biggest challenges have been finding personal quiet time as a family, as well as delegating responsibilities to my parents while my wife and I are at work. We do include Elias in most of our activities as possible and thankfully, our friends have been empathetic to our situation. 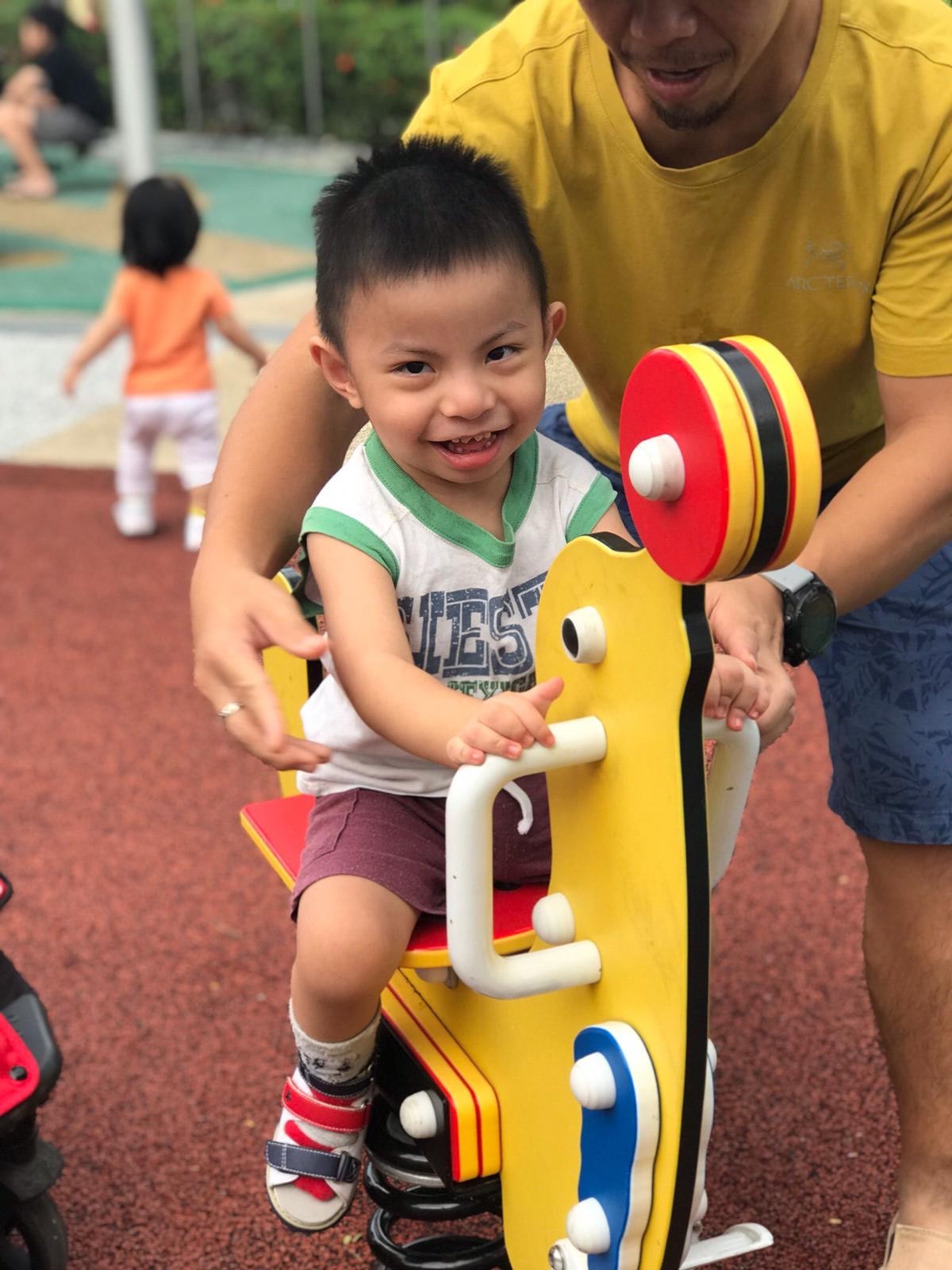 When other parents speak about how challenging it is to look after their kids without disabilities or special needs, I used to think that they have no idea what it’s like to really have it tough. But I’ve since grown to embrace my situation with love and compassion. I now challenge myself to be the best father I can be for Elias.

I salute and have great respect for parents in a similar situation like us – more so if they lack manpower help at home. To these parents, I hope that they embrace their kids with unconditional love and are able to surrender themselves to the situation. May they never feel afraid or weak in seeking help from others.

To everyone else: It is not easy being on this journey, but please don’t pity us. Being a parent to a child with special needs has provided us many opportunities to be the person we never thought we could be. We’re strong individuals because of our situation. Just continue to support us by being an inclusive society!

2. Wei Yee – “There is no one size fits all when it comes to parenting”

Hannah was born with non-functioning kidneys that required daily dialysis from the time she was two weeks old till she had her transplant when she was six.

Before her transplant, she couldn’t articulate her discomfort when she was hooked onto the dialysis machine for 10 – 14 hours a day. We still face challenges now, such as hitting her fluid intake targets, coping with frequent blood tests, and reducing her exposure to infections as much as possible. Covid-19 brought on new challenges too, as she’s considered high-risk. 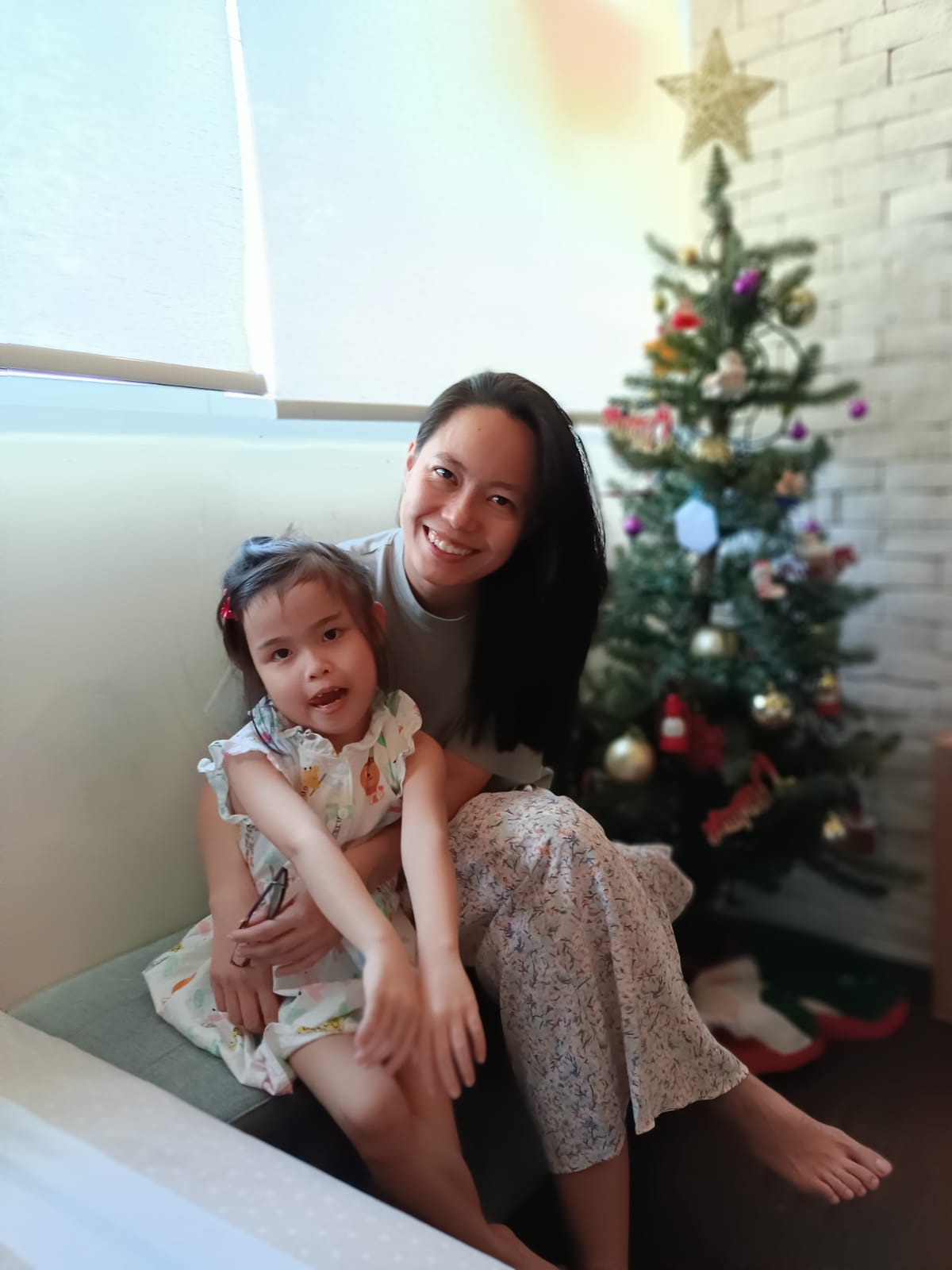 I used to think that children with special needs are defined by certain characteristics or physical traits. But I’ve come to realise that not all of them fit the same mold. It encompasses different spectra and requires different support systems for each child.

It’s the same for parenting – there’s no one size fits all. When we first knew of Hannah’s condition, it was an emotionally challenging time for us as first-time parents. It was difficult talking about our circumstances to our other friends and families who were having kids at the same time.

We reached out to parents facing similar experiences in the end. It felt like I finally had people who understood what we were going through, and it helped reduce our anxieties and worries.

Children with special needs are not defined by their limitations. They too, like all other kids, want to be respected and listened to. Given the right support and resources, many of these children can thrive and be empowered to face life’s challenges.

3. Mdm Tahirah – “My child is not naughty, she just has ADHD”

I’m a mother of nine children, six of whom have special needs. One of them is Rumaisa, who has ADHD. It’s a condition that is often overlooked in females. Although she looks neurotypical on the outside, she faces struggles in learning behaviours and academic achievements. Sometimes her impulsive actions get her into trouble too. 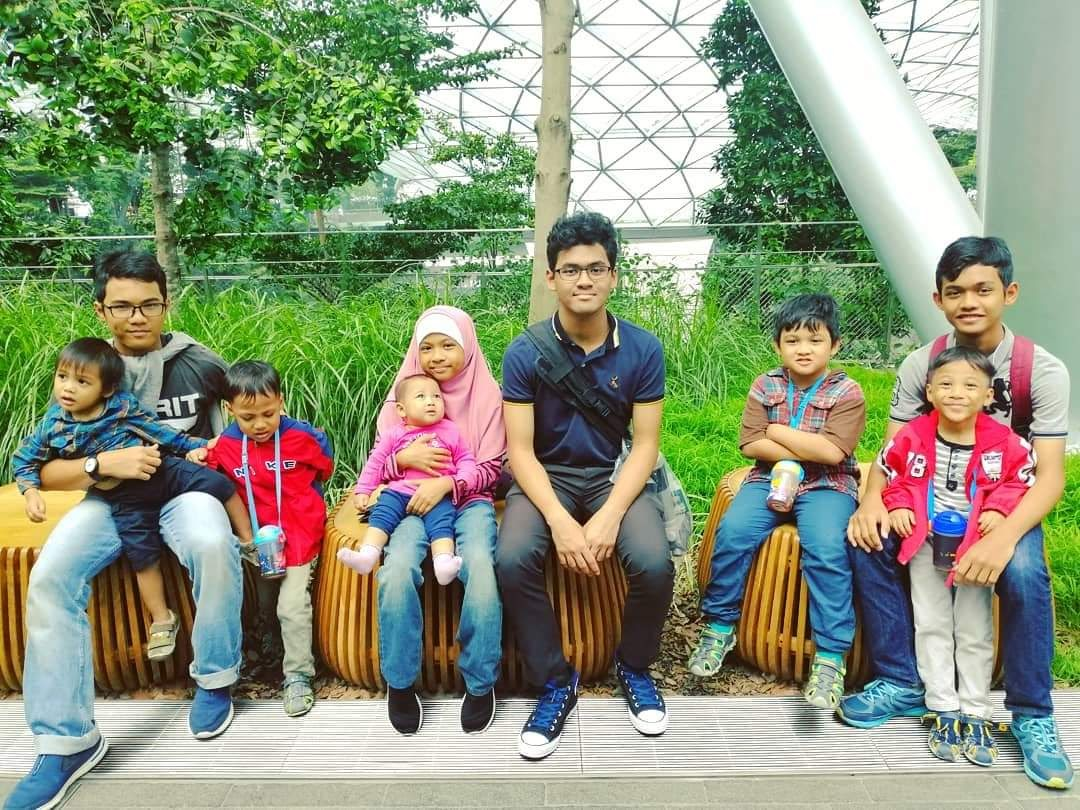 Many people assume that special needs means physical disabilities only, and they don’t often see Rumaisa as having any sort of condition. When she’s being disruptive and hyperactive, people just see a child misbehaving and think she’s a result of poor parenting. But my child is not naughty, she just has ADHD!

I truly believe that a nation’s biggest asset is a community that cares. Families of children with special needs need to know that they will always have support and a place in our community.

Hard stares, glares, unwanted whispers and harsh comments were extremely hurtful when my child had meltdowns in public. Don’t blame us and don’t judge our children. We are our children’s champions, and we’re here to believe in them when no one else in the world has hope in them.

4. Farah Juwita Bte Alias – “We just want the best for our child”

Ilhanshah is my 8-year-old son that is on the autism spectrum and is also non-verbal. It’s a constant challenge for our family to understand his needs and wants. While he can relay his basic needs, he has trouble communicating to us other matters or even expressing his feelings.

Many people think that kids with autism are in their own world, but that’s far from the truth. These kids are really loving and just want to be part of whatever activity or conversation is going on. 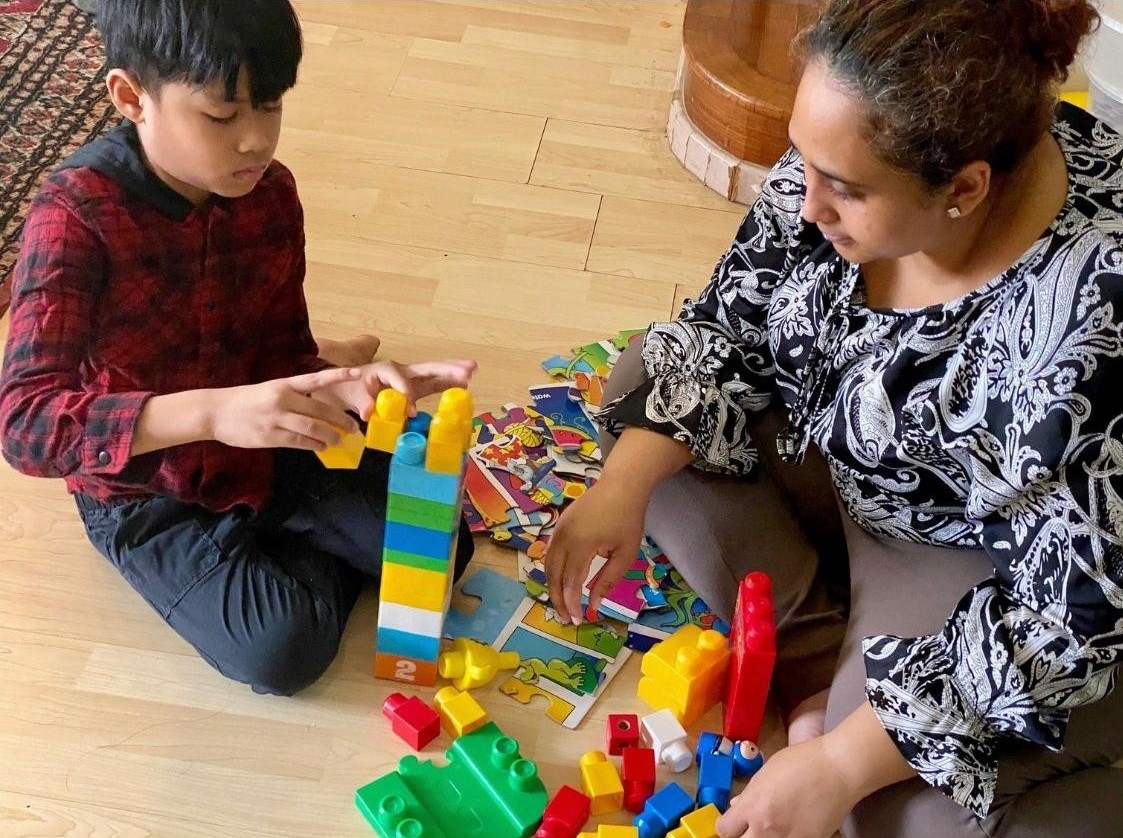 I had a hard time trying to find an inclusive preschool for him. We had to change schools constantly, which affected Ilhanshah and caused him to act up. The rejections also caused me to feel really low.

I eventually managed to get a school for him after reaching out for support and seeking advice from Ilhanshah’s psychologist at SPD@Bedok. It was a turning point for me as well, as I came out from that situation more confident and happier.

Being a parent of a special needs kid is definitely not easy. At the end of the day, we’re just like any other parent wanting the best for their child.

5. Jamie Lee – “What matters is that they grow up happy and healthy”

Child: 15-year-old who is permanently deaf in right ear and has dyslexia

Bryan is not a confident boy to begin with, and with hearing loss only made it worse. He doesn’t like communicating with his teachers, so I often get feedback that they’re unsure if he even understands their lessons. He also  has to wear a hearing aid but doesn’t like to do so because of his classmates’ remarks.

As a mother of five kids, with one having a disability, I’ve had my fair shares of stares and nasty remarks from people. 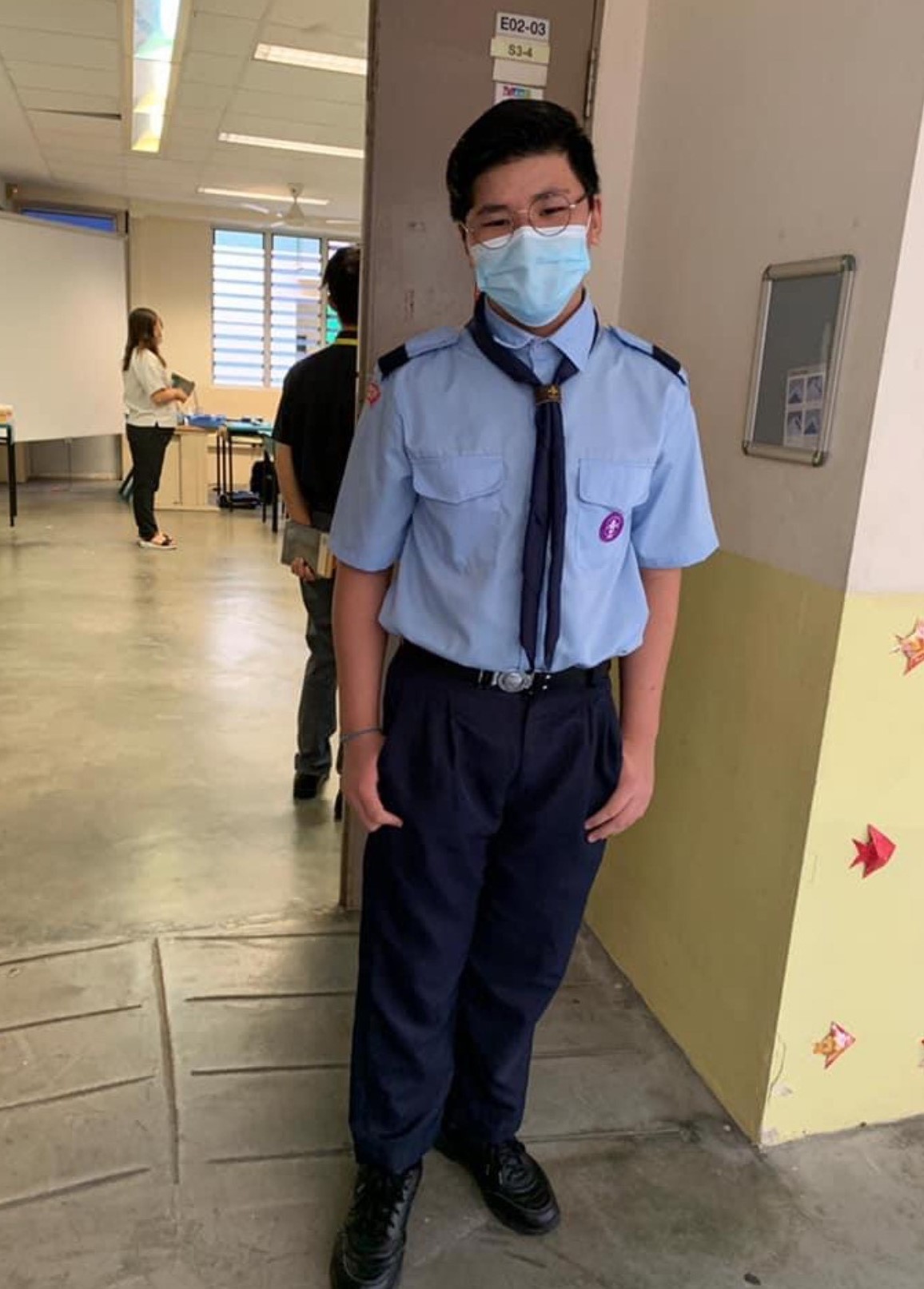 I’ve been told that I don’t pay enough attention to all of my children, which is why Bryan turned out the way he is. I’ve also had people give me parenting advice like not allowing my kids to have too much free time or to let them take ownership of their own schedules.

We were also told to put Bryan in a special school but my husband and I want him to lead a normal life. We don’t want him to get special treatment either because of his hearing loss, so we decided to enroll him in a mainstream school.

At the end of the day, these people don’t know my kids so their advice will not work for me. What matters most to me is that my kids grow up healthy, happy, and knowing what they want in life.

Read about parenting struggles with One Story: Razi

Truly, the challenges parents of children with special needs face are ones we ourselves can only sympathise with. But as these stories are shared, we can grow to be a compassionate and inclusive society for those with special needs.

You can share a similar story too to your friends and family in English, Mandarin Chinese, Tamil or Malay with the National Library Board’s annual One Story campaign under the National Reading Movement.

You’ll be able to learn more about this with Razi, an original short story by Singaporean author Dr Sa’eda Buang that was originally published in Malay.

Like the parents who have shared their own struggles, Dr Buang has written about the frustrations that come from society’s lack of empathy. She has also penned down the lengths parents would go through spurred by the love for their children.

The story has since been translated into the three other official languages and compiled into one book so that the story can reach a larger community beyond its original audience. The eBook is available to borrow immediately with the NLB Mobile app.

If you’re a parent with a child with special needs, institutions like SPD are able to provide help and resources. They also have programmes for the public to get involved in helping these individuals integrate into society.

This post was brought to you by the National Reading Movement. 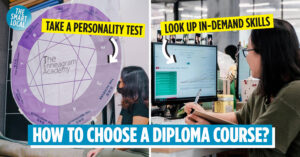 7 Lesser Known Tips For Both Students & Parents To Finally Decide Which Diploma Courses To Apply For
This Free Online Webinar Will Reveal What The Australian Uni Experience Is Really Like In... 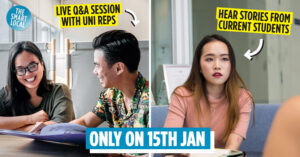