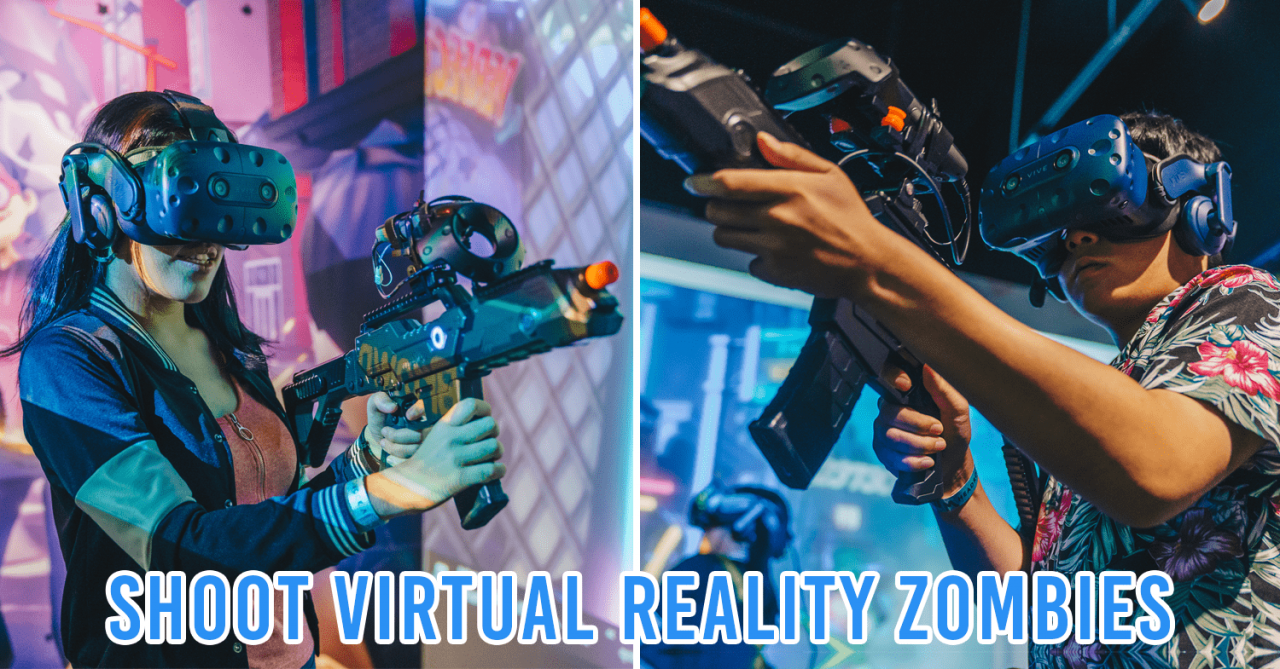 If you’ve been on the lookout for a fresh date idea or wholesome yet engaging family day out, mark your calendars for 18th and 19th May 2019, 11AM to 8PM. SG:Digital Wonderland is providing a weekend’s worth of high-tech fun, equally enjoyable for full-fledged cyber geeks and tech newbies alike.

Held at Halls 404 to 406 of the Suntec Convention Centre, expect a rousing lineup of VR gaming challenges and drone-style claw machines, gadget showcases as well as interactive workshops introducing you to the wonderful world of coding, robotics and Artificial Intelligence.

HADO’s Augmented Reality (AR) version maintains the thrill of dodgeball while subtracting the element of pain. There are no real-life balls to worry about getting hit with! Plus, the snazzy graphics make it feel like you’re battling it out on an actual arena, Ready Player One-style. 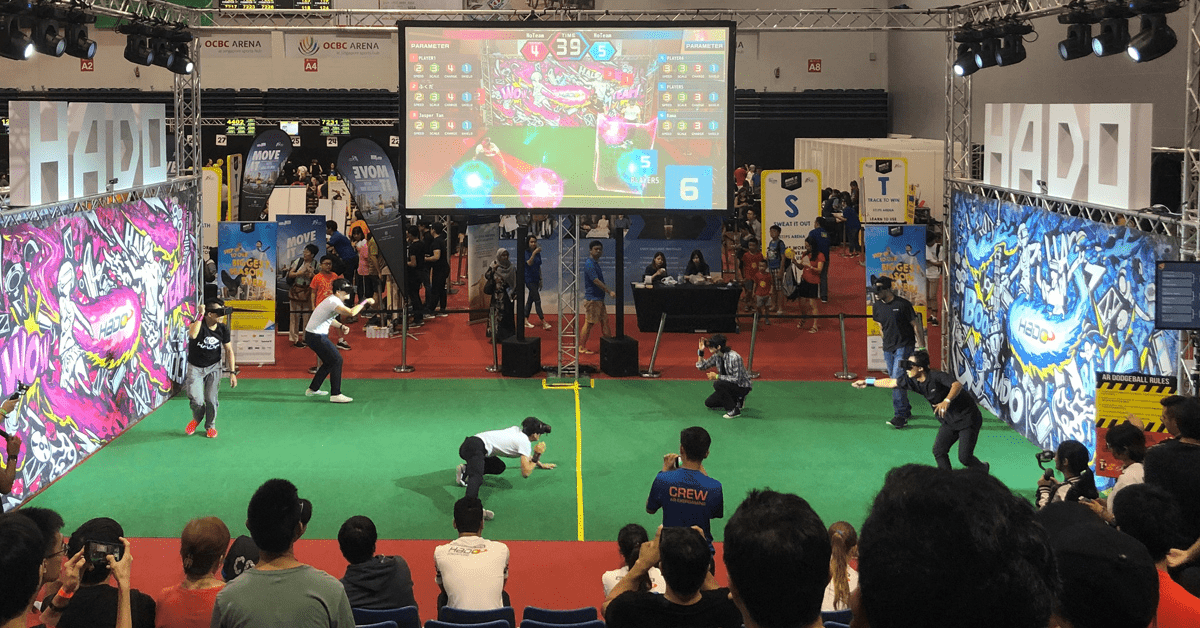 Shoot and dodge Hadouken-esque beams simply by whipping your forearm forward. You can even conjure a shield by “charging up” with your arm faced down and flicking it up real fast in the area you want to protect. Well, you can’t get that kind of reinforcement with dodgeball IRL. 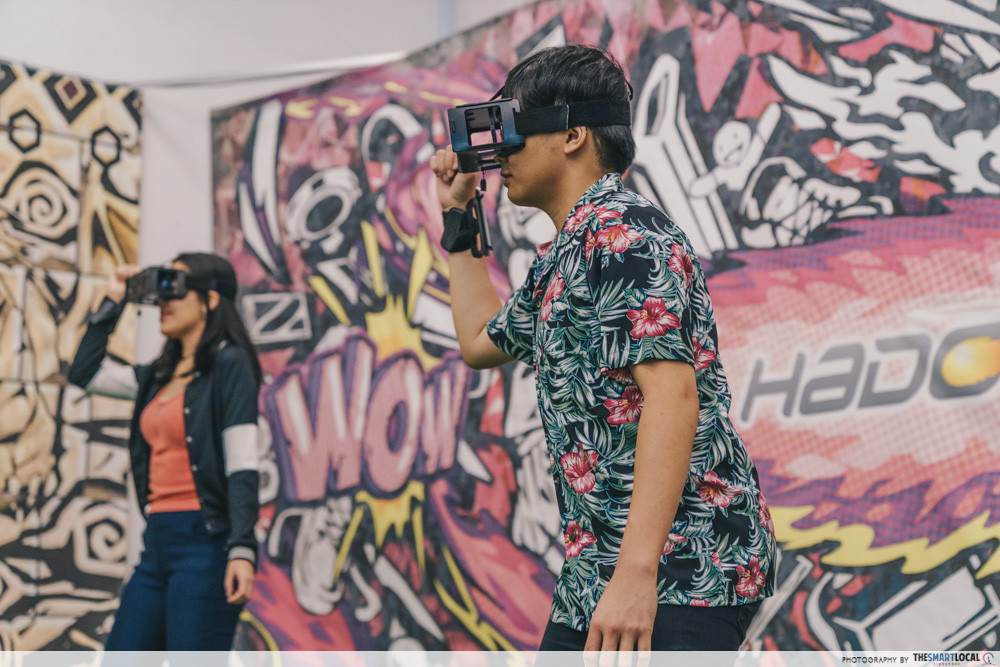 It’s a proper workout, darting from end to end of the court while you squat and bend in all angles trying to “siam” your opponents’ blasts.

Have a go at the non-competitive free-for-all HADO Open Challenge and, if you feel like you’ve got the skills down pat, sign up for the HADO Youth Cup showdown in teams of 3. There are Apple Watches, GoPros, Google Home Minis and a prize pool of $3,000 up for grabs.

Blast off VR zombies at the Digital Media Playground Bringing the high-octane Virtual Reality fun out of its Sentosa flagship for the first time since its 2018 launch in Singapore, HeadRock VR’s Zombie Busters is a duo shooter with crisp graphics and exhilarating gameplay. Despite it being zombie-themed, I definitely appreciate the fact that the character design isn’t too spooky, meaning I can bring my little nieces and nephews to join the fun.

The Digital Media Playground also allows you to unleash your inner Indiana Jones as you embark on a virtual archaeological mission courtesy of Immersively’s An Excavation Through Time game. Roleplaying as doctors and nurses go beyond tinkering with fake stethoscopes, thanks to Serl.io’s Mixed Reality 3D visualisations. This is the same training technology adopted by our MVPs in the medicine and health sciences industry – salute!

If the influx of arcades as well as arcade-themed establishments in Singapore is anything to go by, we as a nation simply can’t get enough of the effortlessly fun gaming concepts and nostalgia factor. 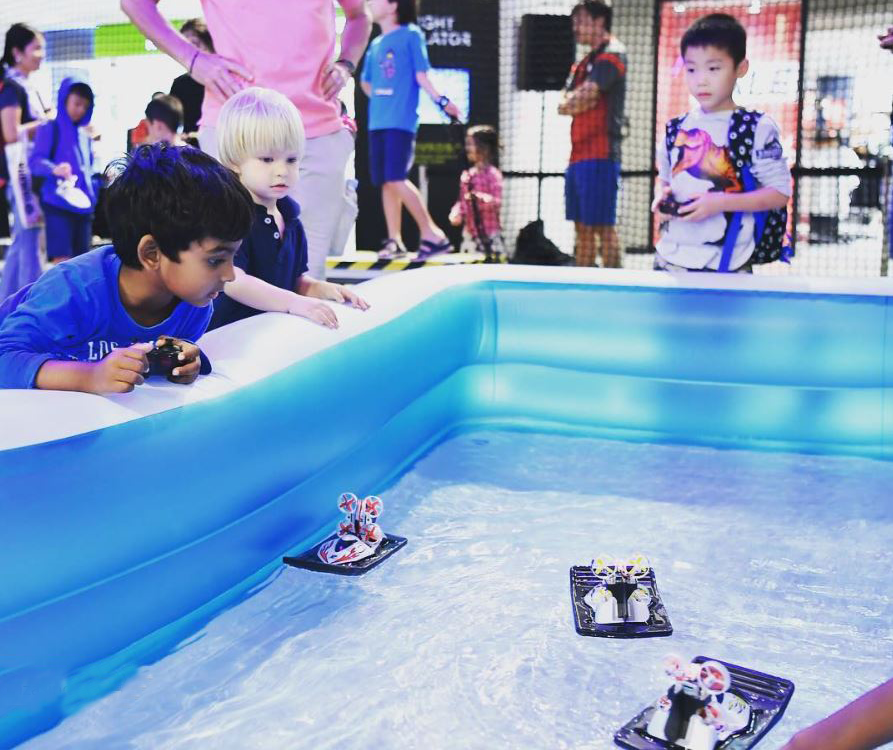 The Drone Try-athlon involves racing a drone-converted race car on a mini track, sailing a drone hovercraft across the water and steering a drone using hand gestures while wearing a special motion glove. 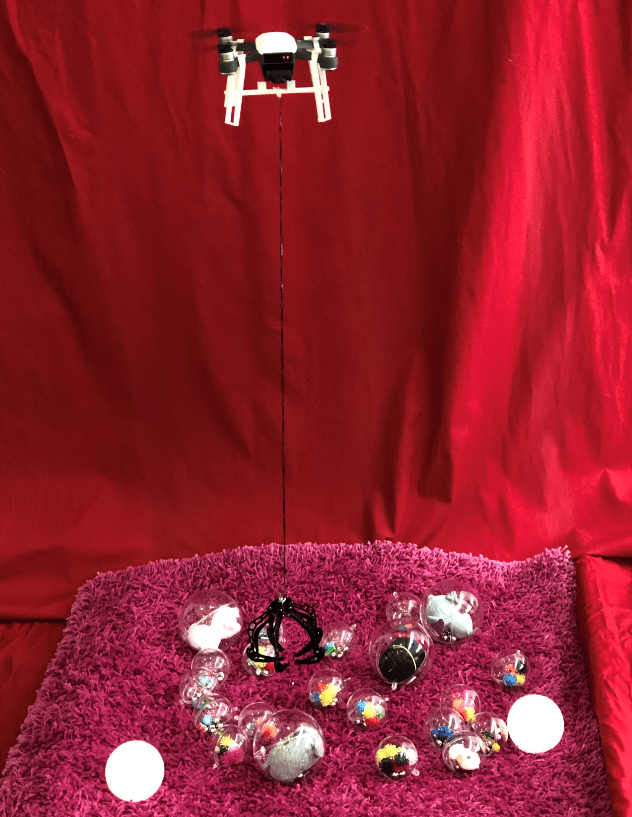 Consider yourself a whizz at claw machines? The drone version will kick things up several notches.
Image credit: 65 Drones

These games prove that the uber cool drone technology is accessible to all ages and experience levels, while having the potential to be implemented in our daily lives through ways beyond what you’ve always imagined. It just might inspire you to pick up drone-vlogging and be the SG version of Casey Neistat!

You’ve heard of escape rooms, now get ready to board an escape room themed bus. The AI Lab On Wheels provides a roving Artificial Intelligence experience, showcasing the capabilities of this fascinating tech-advancement through a series of challenges within the vehicle. Gather clues in accordance with a compelling storyline and crack the case together with your mates. Not gonna lie, the lab interior gave us some serious CSI vibes.

In addition to Crime Scene Investigations like what we see on riveting TV dramas, CSI also stands for Cyber Security Investigation. And that’s exactly what the Lab On Wheels CSI Experience will demonstrate. A separate exhibit taking place on the ground, this challenge-based adventure throws you into the deep end of a simulation that seems eerily realistic: dealing with a nation under cyber-attack from the perspective of industry workers who keep the city running. Fans of post-apocalyptic or sci-fi books and films will get a major kick out of this!

Sneak a peek at the impressive new gadget launches, from home entertainment systems to technology on-the-go. Highlights include the Smart Egg by Aico, a handy companion that takes every single remote control you ever need to use and syncs it to your phone. Using Bluetooth connectivity, you’ll be able to play and pause Netflix, adjust the air-con temperature, soften the brightness of your room lighting and more – all through your smartphone!

The Smart Egg is also hyper-intuitive, instantly muting all your media when it detects that you’ve accepted a phone call. Say goodbye to buying new batteries for your remotes, and going on a wild scavenger hunt when they eventually get misplaced.

Great news for our motorist friends: The super snazzy-looking Argon Transform is a next-level instalment by the good folks of Whyre. Attach it to any regular bike helmet to transform it into a Smart Helmet boasting dual cameras and an augmented vision system. No more fiddling around with Google maps on your phone while you steer, the navigation guide is right in front of your eyes.

Participate in workshops for different activities The rapid rate of tech-evolution signifies the importance of arming oneself with relevant cyber skills and knowledge. Be it for a potential career prospect or just to facilitate seamless day-to-day usage of technology, it pays to stay ahead of the curve.

SG:Digital Wonderland has a host of open workshops catering to various ages and proficiencies, in a wide range of specialisations including digital illustration and animation, mobile app creation as well as coding.

Experience tech of the future at SG:Digital Wonderland

From pocket-sized gadgets enabling immediate access to the entire World Wide Web to electronic gizmos installed all over living, working and public spaces, technology is enhancing our daily lives everywhere we look.

It’s also advancing at an exciting rate, and SG:Digital Wonderland offers a rare one-stop glimpse into the ever-evolving world of tech.

Best part is, admission as well as activities are absolutely free. Gather your squad for a battle on the AR arena or level-up your usual arcade sessions with drone games and a VR shoot-’em-up instead.

This post was brought to you by Infocomm Media Development Authority.
Photo credit: Gabriel Seow 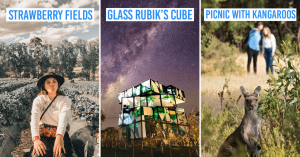