Priscilla, Queen Of The Desert 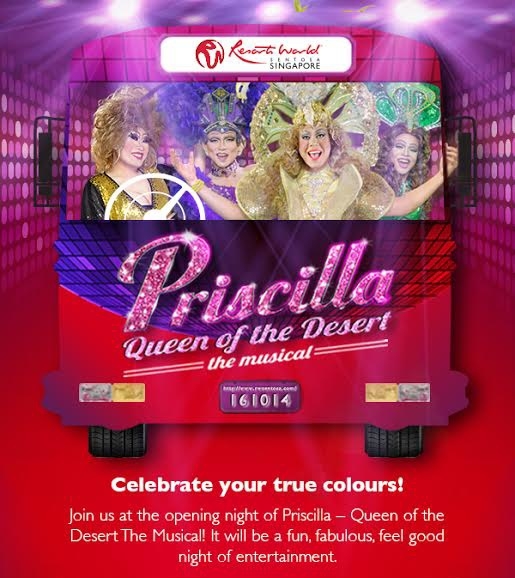 Hold your horses if you think this musical centres around a lady named Priscilla, and that she lives like royalty in the desert. Well, that’s what I thought when I first saw the title of this musical.

Thanks to my overzealous desire to discover what lies behind that title, Priscilla, Queen of the Desert, I learned from the internet that it tells of the struggles faced by a community often discriminated by the masses in society: the LGBTQ community.

Through media such as musicals and plays, alternative voices can finally be heard. With secrets spilled and tears shed, Priscilla takes you on a ride to remember as contentious issues are addressed.

The three protagonists are Tick (Michael Williams), Adam (Red Concepcion) and Bernadette (Jon Santos). Bernadette is an alluring transsexual who used to be a star performer at the Les Girls nightclub, while Tick and Adam are drag queens.

In case you’re wondering, Priscilla is the humanized bus that takes them on their adventures across the Nullarbor from Sydney to Alice Springs. While they revel and have fun being true to themselves, they inevitably face the condescension of the people they meet.

Priscilla, Queen of the Desert conveys a stirring story to the audience through the intense grooving and crooning to a non-stop medley of 80’s tunes. Even though I’m a 90s kid, I couldn’t help but tap my foot along with beats from all those infectious tunes!

The transitions between different tunes were smooth and there weren’t any breakages between songs and dialogues, rendering it a seamless delivery from the cast! It was funny, punny, and a lot of fun to watch. Who wouldn’t snigger when hormones is used as a pun for “whore moans”?

I enjoyed the pacing of the musical, especially for the scene in which they sang ‘True Colors’. Their rendition of the song ensured that lyrics like “feel so small”, “don’t be afraid” and “true colors”, were emphasized to reflect the emotions and thoughts commonly felt by the discriminated LGBTQ community.

I appreciate that the cast made a conscious effort to include the audience in their performance. Miss Understanding kickstarted the musical by teasing that some in the audience are surely ‘L_____’. Given the nature of the musical, I thought she meant lesbians, but she cheekily clarified that she meant latecomers.

The cast brought the stage to the audience as they scattered themselves along the aisles at various points of the performance. I felt less isolated than if they’d just restricted their acting and singing to the boundaries of the stage.

This musical was a joy to watch! You’ll definitely enjoy this musical if you’ve an open mind about the LGBTQ community. Priscilla, Queen of the Desert doesn’t require in-depth theatrical knowledge for one to get what the musical is driving at.

Besides the fun and humor, the musical highlights the lack of acceptance, respect and empathy towards those who lie outside “normal” gender norms in our society.

The LGBTQ community are human like you and I, so it’s only natural that they deserve friendships, support, and love. It is nonetheless worrying how they’re always at the losing end just because they deviate from the ‘norm’ we have grown accustomed to, the ‘norm’ we were socialised into accepting.

The acting and singing were commendable! I enjoyed myself thoroughly, foot-tapping and moving to beats from the funky 80s’ music. My favourite tune is, of course, “I Will Survive”, due to its catchy and empowering elements.

This post was brought to you by Resorts World Sentosa.