Cecil Street on a Saturday afternoon is quieter than you’d imagine. The quiet before the storm, a tourist would be forgiven for thinking that nothing interesting could happen here on a weekend. They couldn’t be more wrong. kyō is situated on 133 Cecil Street, its wooden entrance breaking the monotony of the banks and consultancy firms flanking it. Without velvet ropes and a team of security and club staff working the doors, I almost got lost trying to locate the place even though I’ve been here before. That’s the story of a typical nightspot: when daylight shines, the heart-thumping music halts and less than sober herds of people exit the dance floor. Now, a different but loyal group of people congregate here to prepare for the upcoming night when they do it all over again.

Who are these people, you might ask. They might be the people you constantly try to butter up to get past those velvet ropes, the ones responsible for you butt-dialing a sleeping friend, or the mood-setter of your entire night – the one who controls the playlist.

What keeps you coming back despite scary bouncers and debilitating hangovers? What exactly goes on the other side? I hang out with the three people you’d kill to be best friends with at the club – the Head of Security, the bartender, and the DJ. With each of them, Seth, Eunice and I had a go at performing their roles, and I can tell you now that I failed all three. I guess I’ll have to stick with my desk job.

Din – The Head of Security With Krav Maga Skills I’m not sorry to say this; Din felt more like a guy running his own boutique label than scary a bouncer man. He understands his size may disadvantage him severely in his line of work so he has a great – and by great I mean big – team behind him.

A typical night of work starts around eight at night when they cordon off the area outside the club’s entrance for patrons. The security team is about nine people in strength. For Din, the safety of staff and patrons is the biggest priority and should never be compromised.

If that knowledge doesn’t satisfy you, know that kyō’s policy is to be as friendly as they can with you. This means genuine conversations – as genuine as bar conversations get – and constantly checking up on you to see if you’re having a good time.

Challenge: When the security team has to deal with rowdy guests Din shared with us that he was once faced with a group of seven to eight male guests who were overturning tables in the club. These were big men who were causing a huge commotion and needed to be taken out of the club.

An easy way to deal with a target bigger than you, Din said, is to locate a point somewhere between the middle of your opponent’s chest and the top of your abs – where your sternum should be. Press it, and push the guy backwards with all your strength. That should successfully weaken his stance. 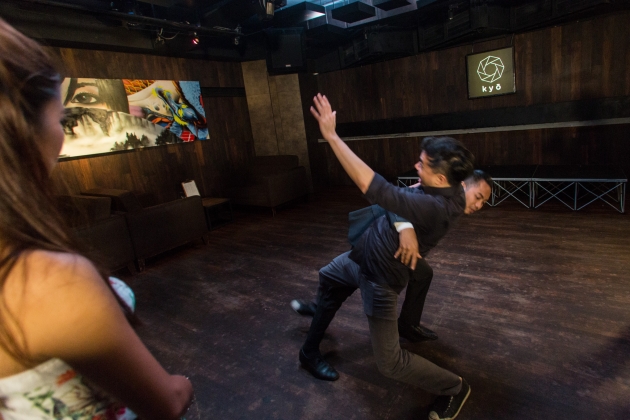 Or you could try going below the arm and trip the target with your leg. When the target is contained on the ground, it would be a lot easier for Din and his team to move him out of the club. Here’s a really safe and non-threatening role play by Seth and Din. It isn’t all tossing glasses and donning cute fedora hats, bartenders have to be keenly observant. They need to remember multiple orders for drunkards like you and I who are incapable of placing orders coherently once we’ve had a shot too many. They also need to know who came first because we all know it’s all a mess at the bar.

I for one don’t really care too much for queuing and priority because where’s the line? There isn’t any, especially when the bar at kyō is 27 meters long!

Challenge: Can I get a Vodka Cran, Gin & Tonic, Whiskey Coke and a Long Island please? If you’ve ever wanted to become a bartender, just know that the bar *chuckles* is set quite high. Seth, Eunice and I found out how hard it is to make a couple of drinks under three minutes. Typically you start with the hardest drink in the order. I’m not going to lie,  the most fun part of the entire challenge is finally getting to work the soda gun. 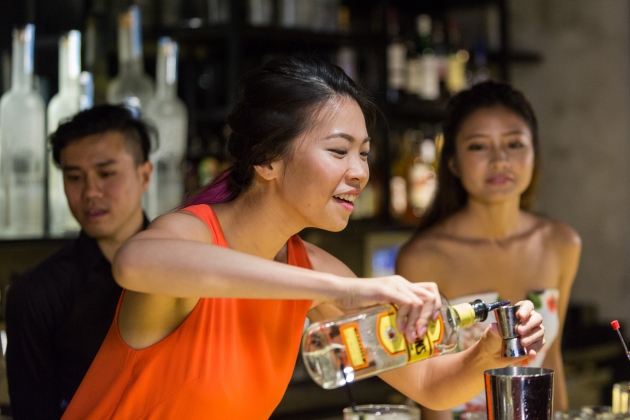 I began to appreciate the jigger less when it all did was to slow me down. Seth won this challenge in the end – I heard he was an ex-bartender – which comes as no surprise. Luckily the winner was judged on how the Long Island Iced Teas looked, and not how it tasted. That’s us with the Long Island Iced Teas we’ve made. As you can see mine was cloudy and very poorly made. If you’ve made the keen observation about that slight flush on my face, yes that was due to my drinking of a Gin & Tonic I just made.

Kenneth – Been In The Scene Longer Than You’ve Been Around Kenneth is an old hand at DJ-ing, having joined the DJ scene in 1984. His hands are old indeed, and have spun tracks of diverse genres although his heart is in dubstep, breakbeat and the ‘beat-y’ stuff. 15 years ago we were all listening to the same stuff and everything that was on the radio poured over to the clubs. Today it’s much easier to hear non Top 40s music outside but Kenneth laments that younger DJs now are much less tech-savvy than their predecessors. They’ve grown too comfortable with technicians that are around to help with troubleshooting and are often unable to do their own ‘patching’ – which refers to the the ability to connect turntables to mixers with the right connectors or cable cords.

The greatest achievement for a DJ is probably when he or she plays for capacity crowds all around the world. If not possible, a three-hour screaming, non dissipating crowd makes for a really good experience as well. What keeps the people dancing and sticking around? Kenneth taught us how to put two songs together by controlling the volume, and the entry and exit points of both tracks. Easier said than done. Actually no, he lost me at ‘so today we’re going to mix two songs together, through a gradual and smooth transition..’. My performance was, unshockingly, a big flop. My reaction time was excruciatingly slow and I couldn’t help but wonder how phenomenally I would suck as a race-car driver. 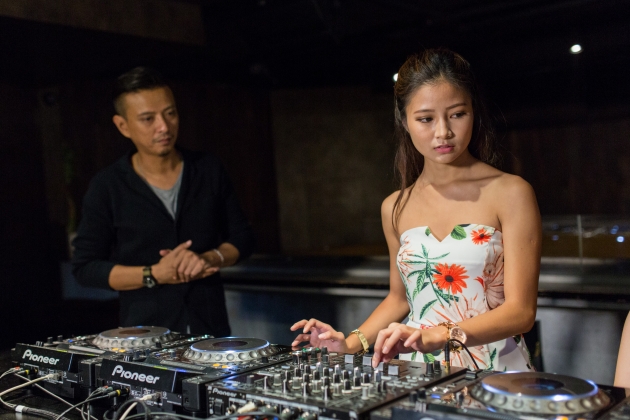 Eunice won this challenge because her mix was well done and sounded the most “comfortable”. As for me, I’d like to thank my parents for gifting me with sluggish hands and fingers.

My personal incapabilities aside, I now thoroughly understand how different operational aspects needed to work together for a nightspot like Kyō to run smoothly weekend after weekend. Before the club opens, the team huddles close and preps themselves for what might happen that night. It might be a really good night of happy guests or a messy one, complete with drunken fights and broken glasses. At nightspots especially, anything could happen right?

In an ideal world, everyone would go for a night out, behave impeccably, and then kiss their friends goodbye. In our world, that hardly happens. The occasional drunk revellers spoil the night for everyone else by behaving unseemingly, and knowing that such a professional team running the show every night puts my mind at ease. This year Kyō and two other finalists are competing for the title of the Best Nightspot Experience in the Singapore Experience Awards. This category recognises establishments ranging from bars and clubs that promise their patrons an amazing night out. This campaign comes at a time where service and experience are being recognised by consumers as basic provisions. This ensures that experience providers are constantly upping their game to separate themselves from the competition, giving consumers the best experience they can possibly have. Who still has time for lackadaisical service?

Through healthy competition and recognition of experience providers’ efforts, the Awards aims to create a dynamic tourism sector that everyone – companies and customers alike – can be excited about.

Other than the Nightspot category, there are also the Dining, Shopping, Hotel, Learning & Travel, and Visitor Attraction categories, just to name a few. Judging takes place incognito, where local and overseas representatives survey and inspect the establishments anonymously. I’m crossing my fingers for kyō to win this one!

You can also tag your own amazing experiences with #yoursingapore, and they could be reposted on the @Visit_Singapore Instagram page. Visit https://singaporeexperience.com to find out more!

This post was brought to you by the Singapore Experience Awards.

20
SHARES
ShareTweet
Review: Priscilla, A True Queen of The Desert
The History of Singapore: Lessons by the Dim Sum Dollies