Think You Know All About Singapore? What if I say majority of us, even those who are born and bred here, have much more to discover about our little country? There are many things that we do on a regular basis, places where we go frequently, as well as things that we have come to accept without noticing or asking why certain things are the way they are.

Granted, we are all busy with the demands of work, school, family as well as our social life, but if we just take a step back and look around, there could really be new things for us to learn with every passing day. Because you know nothing, Jon Snow. 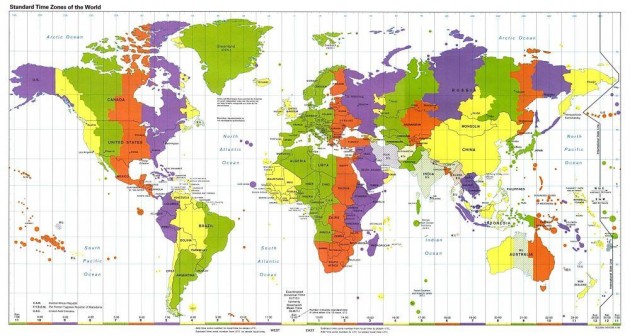 We look at our watches and clocks all the time, but technically, we’re constantly 1 hour late for work or school everyday. That’s because geographically, a more accurate time zone for us is GMT+ 7, instead of GMT +8. And we did follow that geographically-correct time zone, back when Singapore was part of Malaya.

Both Malaya and Singapore adopted the Tokyo time of GMT+9 during the Japanese occupation, and switched back to GMT +7.30 after World War II ended. But in 1981, Peninsula Malaysia figured that they wanted to follow East Malaysia’s time zone and Singapore copied. And that’s how Singapore ended up adopting GMT +8 as our Singapore Standard Time from 1982 onwards.

2. The irritatingly loud bird you hear every morning is protected by law 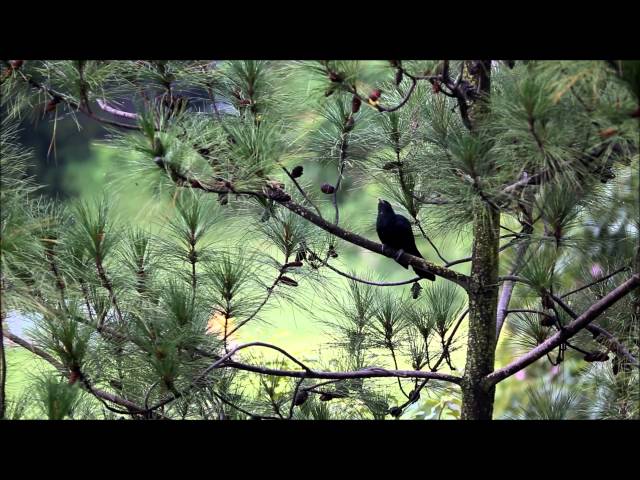 Somewhere, somehow, you must have heard the deafening and repetitive calls of this particular species of bird called the Asian Koel. During breeding season, the Asian Koel starts howling from dawn till dusk, barely even taking breaks and yet going louder and stronger. It might be exciting for the bird, but it is surely a crescendo of misery for most of us. 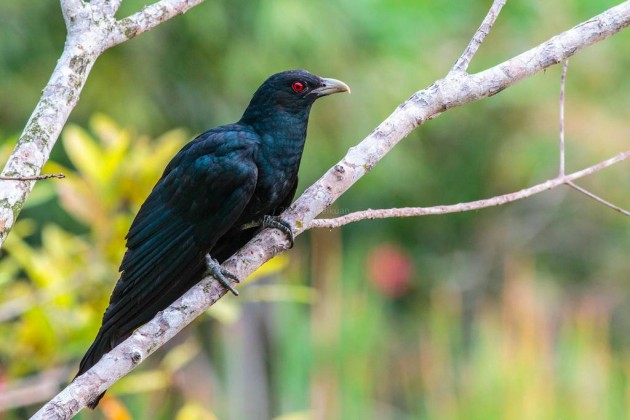 However, while crow and pigeon culling occurs here, there isn’t much we can do about the noisy avians. Asian Koels cannot be gunned down in Singapore simply because they are protected under the Wild Animals and Birds act. If your sleep is constantly interrupted by these birds, there is some way of solving your problem without resorting to violence – simply approach AVA for help.

3. Public toilets must be cleaned a specific number of times a day Having to deal with disgusting public toilets seems to be a daily struggle for some of us with less sedentary occupations, but that really shouldn’t be happening. That’s because toilets in shopping centres are supposed to be cleaned 6 to 8 times per day, while those in hawker centres should ideally be cleaned every 1 to 2 hours during non-peak hours, and every ½ hour during peak hours.

Also, this may come as a surprise from what many of us have experienced – such as the lack of hand soap and toilet paper – but it is actually a legal requirement for public toilets to have all these essential toilet amenities provided. 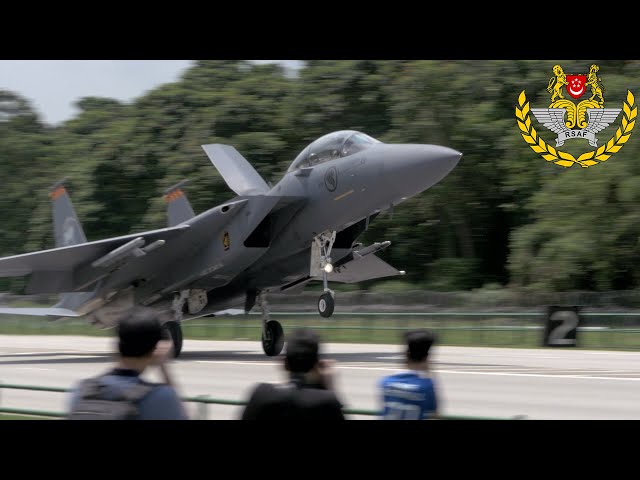 We use the roads everyday but not many of us know that certain roads in Singapore live a double life. Once every 4-5 years, Lim Chu Kang Road turns into a roaring runway, as part of Republic of Singapore Air Force’s Exercise Torrent. The admirable stint was done to showcase the Air Force’s operational readiness as well as its ability to heighten its aircraft take-off and landing capabilities to protect Singapore and her people. We’re not sure how the chickens feel about living right beside a runway though. 5. Lamp posts in Singapore are serialized 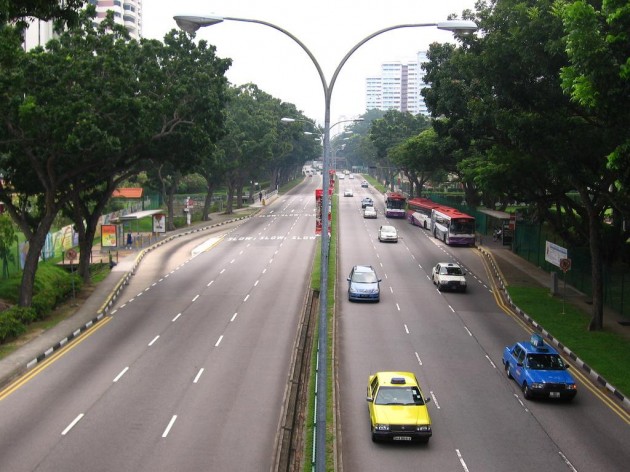 These street lamps light up nightly to guide pedestrians and vehicles alike but not everybody knows that all of our street lamp posts have a serial number or code on them. Basically, they serve a ‘landmark’ for emergency services to locate and reach you if you happen to not know your exact location, for example, where an accident (touch wood) occurred along a road that has nothing but greenery surrounding it.

We aren’t sure how true it is but the story goes that there was once a government official who was playing golf at the Singapore Island Country Club, got lost when he was looking for the golf ball and then found himself along a road. He called for a ride back but the only landmarks he could see were lamp posts and trees (we know that’s not helpful at all where you are trying to pinpoint an exact location). And so…after that incident, all the lamp posts in Singapore had to have a serial code on them.

6. Each denomination in the latest series of Singapore’s coins has a different edge pattern The newest coins in circulation locally are from the Third Series, where new security elements have been built into them to prevent fraudsters from producing counterfeit coins. An easily overlooked feature however, is the distinct edge patterns on each coin.

As trivial as this may seem, the reason behind why the newest coins in circulation right now have this design feature is just so that it helps make the lives of those who are visually impaired a little easier.

You probably have the coins in your pocket right now, so go ahead and scrutinize your coins with eagle-sharp eyes.

7. Trees along the roads are planted a specific distance apart Depending on the size of the trees, and where they would be planted, tree planters have certain rules to abide by when they spruce up our environment with greenery. Large trees planted along expressways and major roads are generally spaced between 8 to 12 metres apart. Meanwhile, smaller palms can be planted as near as 3m apart.

If you want to find out more about roadside greenery, click here to read the online resource furnished by NParks.

8. The “Majulah Singapura” banner went from convex to concave 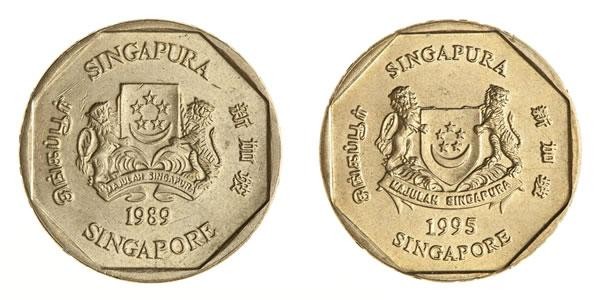 Rumour has it that the National Coat of Arms (i.e. the heraldic symbol of Singapore) on our circulation coins from the Second Series underwent some slight modification upon the advice of a formidable fengshui master. And that was how our minted coins transformed from a seemingly frowning face to a smiley one from 1992 onwards when the Coin Advisory Committee back then decided to make the switch official.

Officially though, MAS states that the newer smiley faces are simply in line with Singapore’s National Coat of Arms.

9. You can use Singapore currency in Brunei

Some of you may know that a $5 Brunei note has the same value as a $5 Singapore legal tender, but do you know why is that so? Well, according to what we gathered from the Monetary Authority of Singapore, there is such a thing called the Currency Interchangeability Agreement that dates back to 1967.

This system that was initially adopted by Singapore, Brunei and Malaysia (and then later abandoned by Malaysia in 1973) allows free interchangeability of each country’s currency in a bid to encourage trade and economic relations.

While Bruneian currency was slightly more common in the 90s, few Singaporeans encounter such notes today.

The hidden message that is printed in microtext on the back of a $1,000 Portrait series note is none other than the full lyrics of our national anthem. Yes. It’s the song you mumbled to throughout your secondary school days, printed in its full glory, at the back of a note.

On the highly impossible chance you have a $1,000 note with you at the moment, use a magnifying glass to help you out – focus on the rectangular box at the bottom left hand corner where you see the word “GOVERNMENT”.

Did the 10 featured ”national secrets” help you learn a little more about our country and its quirks? It certainly isn’t too late to start appreciating the little things in our daily life more. Also, feel free to share with us in the comment box below if you happen to know of other intriguing national secrets!