Ever since the local Korean premiere of this entertaining, non-verbal musical in October 1997, NANTA has struck it way as a highly raved about performance known across international audiences. NANTA’s cast has played its magic to more than 8 million audiences around the world, making it the longest running South Korean show ever in history.

With its charming percussionist performances endeavoured by the creative use of kitchen utensils, it has even made history as the first Asian production ever to open its own off-Broadway theatre.

A performance inspired and derived from the traditional Korean instrumental performance “Salmunori“, watch in awe as your everyday kitchen appliances and utensils are transformed into musical instruments that make you feel like moving along in your seat as well.

Strung together with occasional acrobatic stunts, such as the inept handling of fragile looking plates and kungfu-like dances accompanied by brroomsticks, NANTA thrills the audience every minute with its action packed performances.

Synopsis of the Show 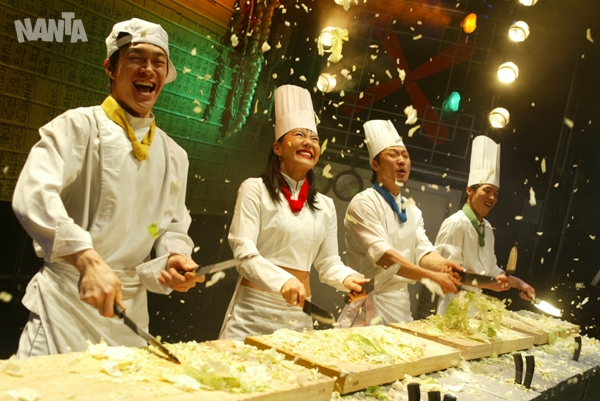 The plot of the musical is simply a story of 3 cooks preparing hastily for a wedding banquet within an hour at 6pm. The manager then tries to plant his nephew within the kitchen as well, comes in occasionally to conduct spot checks on their progress. To add local flavor to the performance, the cast had even included Pandan Cake in its menu lineup, which in turn drew some amused chuckles from the audience every time it was mentioned.

NANTA, in essence, is a performance that awakes your senses and inundates them with good feels. How often do you get to watch a live cooking performance (aside from musical and dance accompaniment) whereby you can actually, seriously smell the storm they are cooking there on stage? It was amazing having the smell of bulgogi (Korean barbequed meat) waft to your noses even though we were a considerable distance from the stage. Watch intently as the very cabbages, carrots and cucumbers you see knives chopping rhythmically at are transformed into real dishes before your eyes.

Other than the emphasis on the usage of cutting boards, water canisters and the like to create continuous percussion rhythms that follow throughout the performance, it is cool to say the performance was littered with plenty of comedic, amusing moments. It actually had me bowling over with uncontrollable giggles that had me ending up in tears – it was so hard to actually stop myself. The hilarious facial expressions, comedic sound effects and audience engagement cracked the audience up aplenty, and in my opinion were very cleverly and carefully inserted to keep energy levels consistently up.

The show closed with a spectacular, enchanting display of percussionist charms with the use of traditional Korean water drums. The integration of accompanying light effects, adrenaline-pumping music and energy from the cast still remain a vivid picture in my mind up till this day. This performance was an absolute heart winner right from the start till the end.

Held from the 10th to 13th July 2014 – NANTA has already finished its run in Singapore. But they are bound to be back soon so do look out for them when they come around again. Tickets as always would be purchasable on SISTIC.