Best Burgers in Sydney Under $10

As far as food trends go, we Sydney-siders have experienced a fair few over the last number of years. Macarons, cronuts, the current rise of the Taiwanese gua bao, but none have ignited the fire in our bellies like the subject of who makes the best burger. That’s right, Sydney is still riding the burger wave and I for one am more than happy to grab a few barrels (Is that the correct term? Surfer friends?).

We have so many options too, from your humble battered fish burger from your local suburban fish and chips shop, to burgers containing whole pieces of fried chicken, to even a savoury cronut gruyere cheeseburger. But let’s face it, we live in an expensive city, so I have taken the liberty of rounding up Sydney’s tastiest burgers that you can buy with a tenner (and sometimes even have a little left over.) 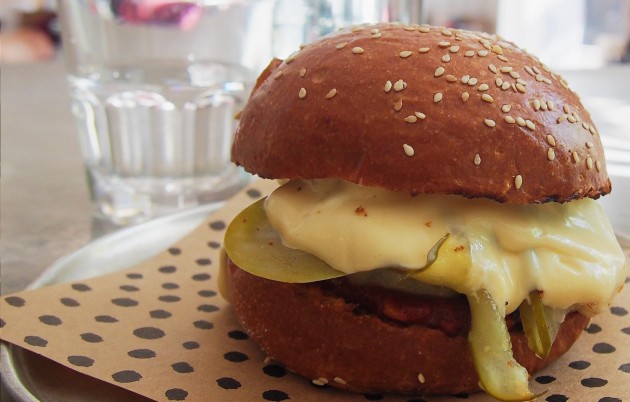 Alright let’s start things off with everyone’s childhood favourite – the humble grilled beef burger. The best thing about the beef burger is that you can add literally anything to it and it’ll probably taste good. Add lettuce and tomato? Sure. Onions? Why not. Bacon? YES.

Chur’s version is nestled in a brioche bun, the ground beef is well seasoned and cooked to a perfect pink medium, with a tomato jam to add a bit of sweetness, and long slices of pickle. What really makes it stand out though is the mustard mayo, adding a depth of flavour you wouldn’t get with any old supermarket brand mayonnaise. Other Chur offerings include (but not limited to) the pulled pork burger with red slaw and fennel mayo, and the crumbed fish with pickled cucumber and dill, all of which are $10.

Also just as a general FYI, the word “chur” is New Zealand slang for “cheers” or as a form of agreement. #themoreyouknow. They are, however, not opened on Sundays, which is a bit of a bummer. 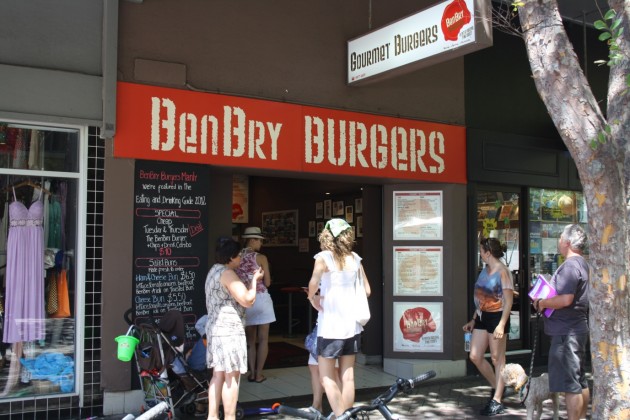 Travel up to Sydney’s northern beaches and you are greeted with masses of the affluent; with beautiful straight teeth, shiny cars, and lots of really cute dogs for some reason. You’ll also come across Benbry Burgers, a little local hole-in-the-wall joint off the main strip of shops at Manly beach, home of the Lamblicious burger. Because not liking lamb is unAustralian. Apparently.

Made of Prime Australian lamb with cumin, lettuce, tomato, red onion, tzatziki yoghurt and housemade aioli, the Lamblicous (frankly I just like writing “Lamblicious”) smacks you in the face with flavour. And at only $10 it’ll cost you less than even the most budget of lamb chops at your local pub and probably tastes better too. They also do a $10 combo on Tuesdays and Thursdays where you can get any of Benbry’s burgers (they got beef, lamb, pork, chicken, fish and vegetarian ALL the burgers!) with fries, dipping sauce and a drink which is such good value if you’re in the area. 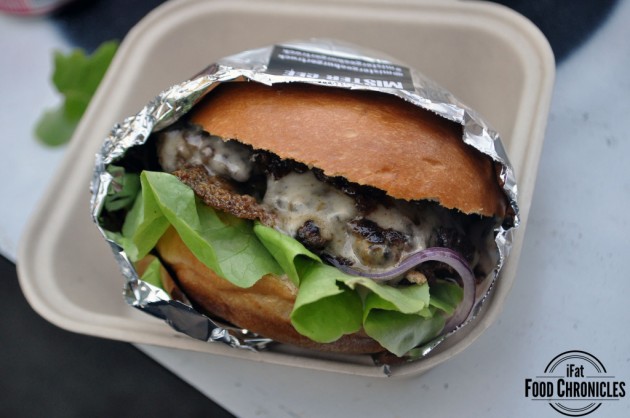 Here sits an unlikely candidate to the list, purely because it’s a food truck. And as is the way of a food truck’s mobile nature, Mister Gee’s has a tendency to move around so to find it you’ll need to follow its comings and goings on social media but what a cult following it’s accumulated. Currently parked at Burwood Car Wash, the hype is alive and kicking and lines are long and strong with the promise of things to come.

The menu is (super duper) concise with only one burger, one chips, and one shake available each week. What this allows is for the Mister Gee burger masters to really perfect their art and provide the rest of us with an absolutely smashing burger. The burger drips with juiciness and everything holds together with near perfect structural integrity. Previous burgers include the Cheese Boogie (omg), the Fat Boy burger with red onion, cheese, lettuce and bacon jam (omgg), and the Truffe burger with rocket, cheese and truffle sauce (omggg). All burgers are $10 and you can get trucking from Thursday to Saturday from 7pm-10pm (or until sold out).

Updated: Mister Gee has trucked on and is now parked at Platinum Car Wash at 313 Parramatta Road, Haberfield. More parking spaces available, opens at 6.30pm Thursday-Saturday though you should probably get there to line up from around 6.00pm. The things we do for burgers aish. 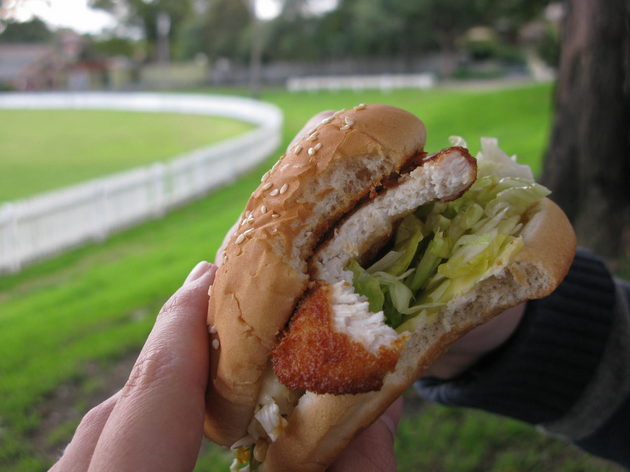 I honestly reckon the Portugese do some of the best chicken burgers. In the world. In an age of battered this and deep fried that and triple crumbed whatever (does that actually exist?), there’s something comforting in knowing your chicken fillet burger is marinated and grilled and that’s it.

Frango means “chicken” in Portugese, has been a favourite with Petersham locals since 1992. It’s since opened branches in Bella Vista and Smithfield, with no frills and no nonsense service. The Original Portugese burgers are actually quite a generous (read: massive) size and served with an ample squeeze of their secret recipe Piri Piri chilli sauce and mayonnaise, shredded iceberg lettuce, tomato and cheese. If not in the mood for a burger, they also have chicken with mad addictive salty skin to whet your appetite. Go check out what has the locals in constant chicken-induced food comas. 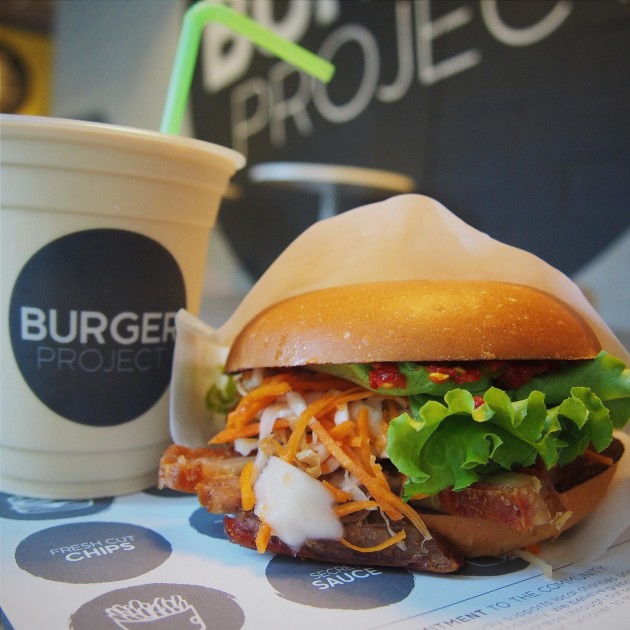 Opened in 2014 by Neil Perry, an Australian culinary legend, Burger Project added fuel to an already rampant burger war fire. His restaurant Rockpool is home to one of my all-time favourite burgers, the full-blood Blackmore wagyu burger. I don’t know about you but if you heard a chef of his calibre was opening an “old school burger joint” you would get excited too. Expectations were high and opinions were divisive, but you cannot deny the appeal of their spicy pork belly burger for under $10.

There’s a slight kick of chilli (not quite enough to get the sweat rolling but enough to be like “oh, there’s the chilli”), a generous serving of pork, ACTUAL crackling and it’s SUPER crackly, and the pickled slaw is a pleasant contrast that’s reminiscent of the Vietnamese pickled veggies you get in a banh mi.

Located in World Square in the CBD, Burger Project has to compete with international star Din Tai Fung next door and an array of local eateries, but I personally was super impressed with the value for money you get with the burgers here. Perry wanted to create an air of un-pretentiousness and I think he achieved it. Other tasty options include the Cheese and Bacon, The Korean with kimchi and spicy Korean dressing, and The Double cheeseburger. Also, they currently have a dulche de leche thick shake that will sets my heart alight. 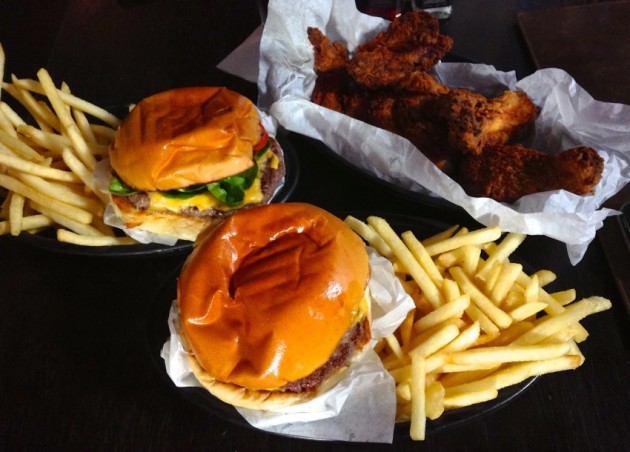 Hail Mary’s full of grace, the throngs of Sydney burger lovers are with Thee.

(I saved the best for last.)

Mary’s in Newtown has been the Holy Grail for their American-style fried chicken and burgers for a number of years now but the game was flipped on its head when they opened a takeaway-only outlet in the heart of the CBD and inner city workers on their lunch breaks were able to get Sydney’s actual burger king aka the Mary’s burger for $10. And what a burger it is.

Likened to In-n-Out in the States, Mary’s beef patty literally DRIPS in juiciness (in the best possible way), a silky soft non-brioche bun, lettuce, tomato, cheese, and their famously delicious Mary’s sauce (I don’t even know what’s in it, only that it tastes like happiness). There’s the option of adding bacon for an extra $4 and a fried chicken burger starring Mary’s hella crunchy fried chicken for $12 if ever you were in the mood to splurge. And if you ever do, ask for it with an extra beef patty. Trust me it’ll be worth it.

The Best Burgers in Sydney

The next time you have your burger cravings give any of these six outlets a go! I promise you won’t regret it. Have any other suggestions for great tasting burgers in Sydney? Let us know in the comments!

3,247
SHARES
ShareTweet
9 Singapore #FoodPorn Instagrams That Will Make You Want To Lick Your Screen
21 Forgotten Dialect Restaurants To Bring Your Grandparents To And Make Their Day