Even if you’ve never watched a DESPICABLE ME movie, you’ve probably stumbled upon snippets of Minion action on the internet that have made you 1) burst out in laughter, or 2) coo over utter adorableness.

The ending of each DESPICABLE ME movie so far has showcased special Minion performances, leaving us with bitter-sweet feelings as we bid our temporary goodbyes to our favourite yellow creatures.

What to expect at the DESPICABLE ME Breakout Party 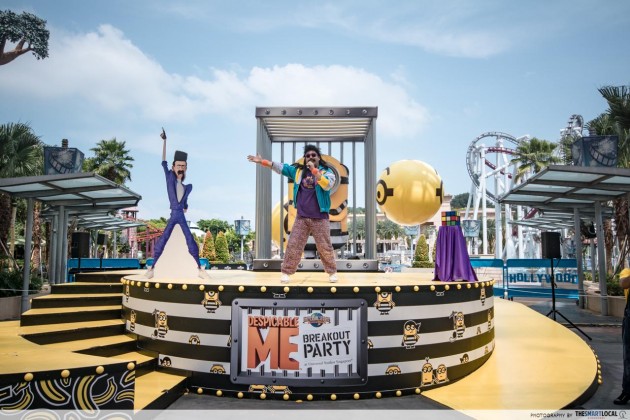 With yellow balloons at every corner and DESPICABLE ME theme songs blaring from the speakers, Minion-fever was going strong. We noticed that everyone, regardless of age, gender, or level of paiseh-ness at being at a DESPICABLE ME Breakout Party was queueing for selfies with the adorable cut-outs.

Which is great. It shows how people’s love for all things cute can cut across different divides and bring people together. The blaring of 1980s retro music will announce the arrival of Rodney Rotten and his enthusiastic Minions, who will then break into their dance moves with gusto. 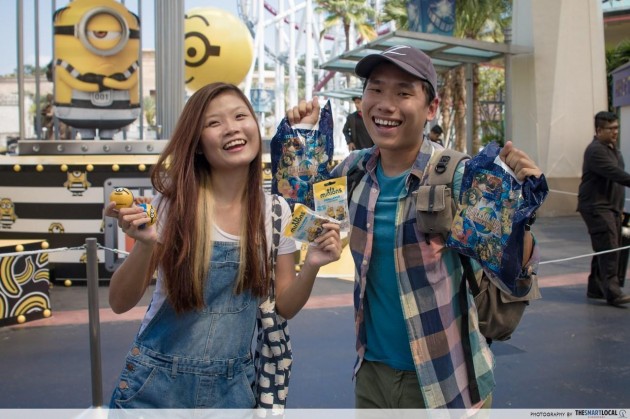 The self-proclaimed biggest fan of villain Balthazar Bratt from DESPICABLE ME 3, Rodney, then invites volunteers to take part in an intense dance battle, where they’ll stand a chance to win prizes including Minion trading cards and tiny figurines. Not a dancer? No worries, you can still get yourself a prize in the DESPICABLE ME 3 trivia contest and the banana eating competition. But there’s a catch. You’ll have to eat the banana without using your hands – so be prepared to get messy!

Get 2 cute temporary tattoos for $2 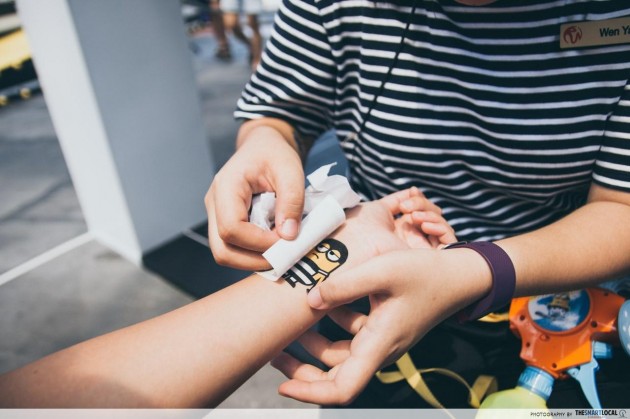 A DESPICABLE ME 3 Tattoo Parlour sits discreetly beside the main stage, overlooked by most visitors.

You can join the ranks of the “Minion convict” gang for a day. Get a tattoo for you and a friend early on and keep an eye out other “Minion convicts”! The tattoos are applied onto your skin with a Minion water gun for extra dose of legit-ness.

Note: Children below 12 get FREE tattoos.

There are game stations with sure-win Minion-themed prizes A party wouldn’t be complete without games, and the Minion plushies on display were too adorable to resist. At $5 a game, your agility and accuracy are key to the highly sought-after Minion merchandise. From plushies to notebooks to backpacks, no one leaves the booth empty-handed. There are a total of 5 game booths, with all being variations of throwing and shooting games. It’s easy to get overwhelmed by everything that’s happening, but the sudden blare of alarms will bring curious onlookers back to the Central Stage, where staged policemen appeared frantic – oh no, the Minions have broken out of their cells!

Here’s a tip – stay calm and keep a lookout for mischievous antics. The Minions and their comrades have a plan to escape, and only the keenest of eyes can seek them out.

At the end of the parade, there’ll be a special appearance by our beloved characters, Gru, Mel, Kevin and Stuart. Be sure to snap some photos with them before they rush off for their next mission! Cue “It’s so fluffy I’m gonna dieeee!” squeals. Upon entering Minion Mart, we were greeted by Unicorn Plushies ($45), all crying out to us to be cuddled and taken home. Other than the Unicorn Plushies, there were also Unicorn and Minion Bedroom Slippers ($45 each), Minion Plush Bags ($49.90), and Minion Tumblers ($18). 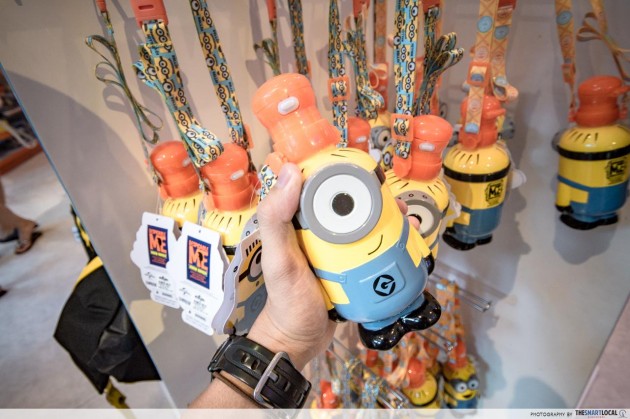 It took a whole lot of determination to walk away without buying ~everything~ when it was time to go. 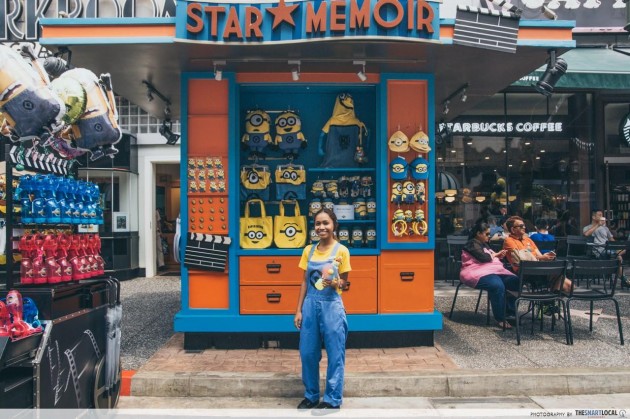 There are cart stalls around the park too. From balloons and portable mist fans to tote bags, there are more than enough Minions for everyone – if there’s something specific you’re looking for, just ask the staff decked in the Minions’ signature dungarees! We all know that bananas are the Minions’ favourite food, and this time, we get to share their joy. Before you leave, stop by POP.A.NANA, a quirky Minion-themed food stall near the main entrance. Judging by the queue, this stall has as many human fans as it does Minion ones. 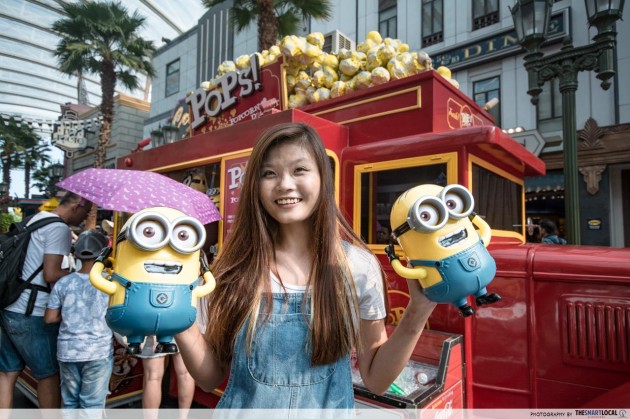 The Minion Popcorn Bucket ($35) comes with a one-time free refill. 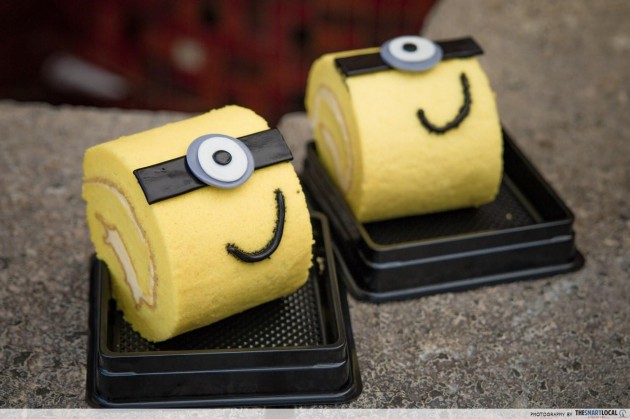 Thank goodness for the Minion Soft Serve ($4), which wasn’t too sweet, and offered a cool escape from the humidity. But if you’re up for sharing with friends, go for their Banana Bingsu ($10) – it’s a swirl of banana flavored ice flakes, with a tangy burst of blueberry sauce.

Catch DESPICABLE ME Breakout Party before it ends on 20 August 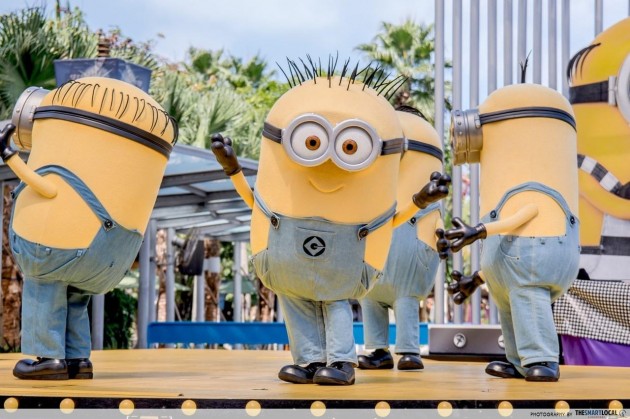 The DESPICABLE ME Breakout Party is a bonus if you’re visiting Universal Studios Singapore soon. There’s no extra charge to being part of this event, and a normal-priced ticket gives you the usual access to ride attractions and shows.

With the quirky ambience and joy, we had a great time being kids again for an afternoon. Complete with themed-food and games, the experience was carnival-like. Parties don’t last forever, so be sure to get your tickets before the DESPICABLE ME Breakout Party ends on 20th of August! Find out more about DESPICABLE ME Breakout Party here!

This post was brought to you by Universal Studios Singapore.

Changi Airport Terminal 4 Is So High-Tech, It's Game-Changing For Travellers Who Hate Queuing
5 BEST Student Perks In Europe For Young Singaporeans Who Still Have Their Matric Cards