Living as a Migrant worker for a day

From rat infested quarters, to cases of wage theft and exploitation, stories of the 3rd world treatment of migrant workers in our 1st world country have appeared as recently as this year. Living in our own privileged bubbles, we have often crossed paths with them – but seldom have they ever crossed most of our minds.

With migrant workers being misunderstood at times, and at other times ignored, we decided to take a walk in their shoes for a day to learn more their lives. 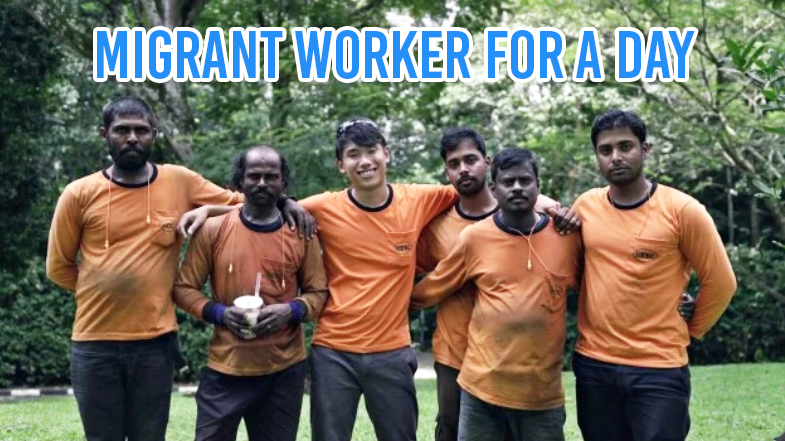 The premise was simple. John Lim, a photographer from TheSmartLocal, would swap lives with John Britto, a grass cutter from Chennai – taking up each other’s roles, responsibilities and lifestyle for a day.

After tailing John Lim as he experienced life like a migrant worker, here are some of the insights we gained from these oft-underappreciated people of Singapore.

1. They do volunteer work on most free Sundays 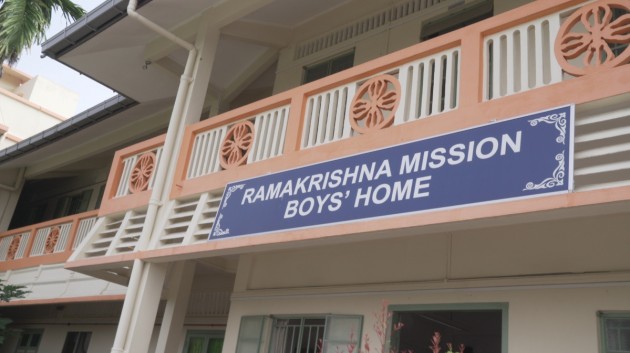 With the same gardening tools that they use to upkeep our parks, John Britto and his guys help to tend to the greenery around the Boy’s Home every other Sunday – all of their own accord. 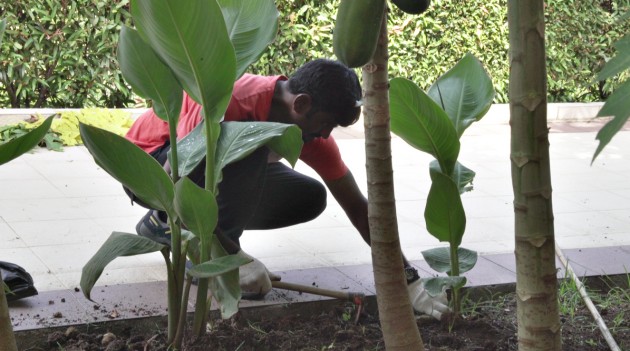 These are the same guys who work at least 6 days a week in the blistering sun, just to earn that extra cash to send back home. A lot of us have so much more time on our hands even with school and work responsibilities. Yet, while we can go for impromptu suppers with friends at 12am, we always seem to find it difficult to do something that isn’t for ourselves.

2. They have recreational centres the size of some schools

Terusan Recreation Centre in industrial Jurong is probably a place most of us have never heard of before. Spanning the size of 9 football fields, it’s one of 6 migrant worker recreation centres built in Singapore. 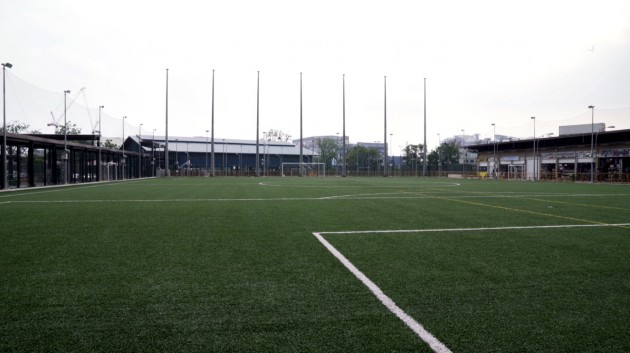 Past its gates, we were greeted by a full length football field, with the astroturf rivalling the ones found at most independent schools. Rows of shops lined the corridors, with stores selling fresh produce, everyday products and even internet cafes. 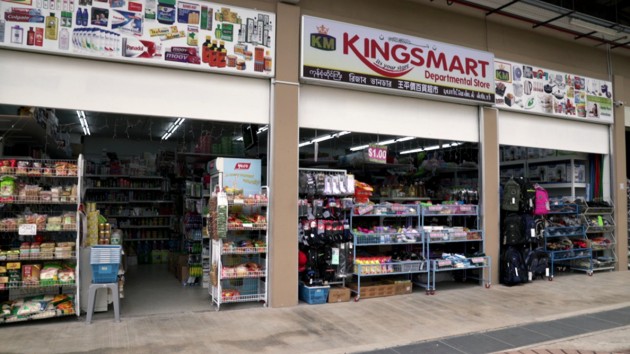 Food courts and movie screening halls were also located within the compound – offering movies in English on Friday, Tamil on Saturday and Bengali on Sundays. 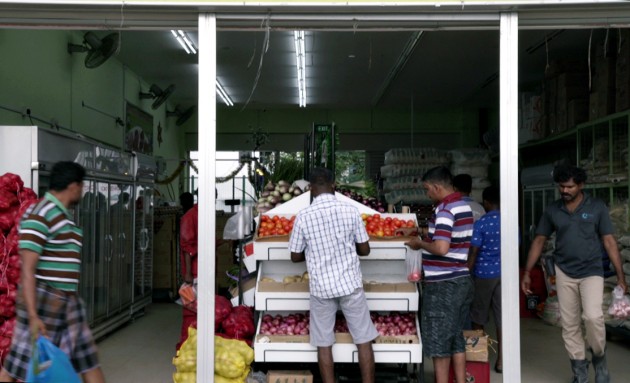 Also playing host to several outreach events, these recreation spaces were created to provide alternative options for these migrant workers to gather and relax beyond the streets of Little India, giving them a living environment like a home away from home. 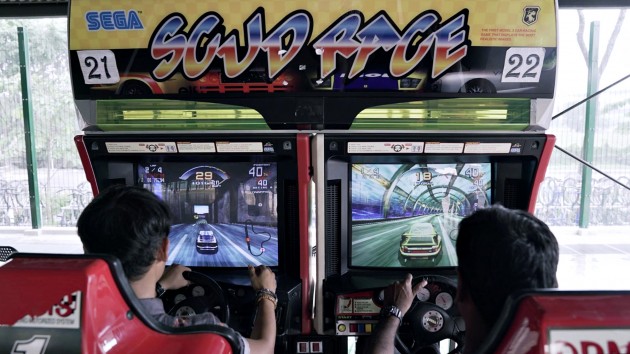 3. Every meal is home-cooked – even their lunches in between work

After watching TSL’s Singaporeans Try: Competitive Eating video, I’ve always wondered if the food served was really what migrant workers have to eat day in, day out. It was a surprise to find out that, for John Britto and his guys, every meal is home-cooked. 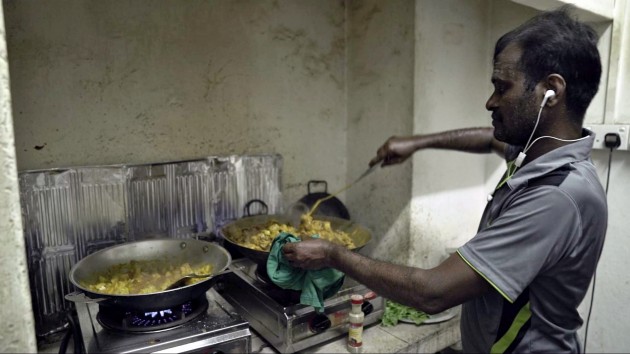 In-house masterchef Kaliya heads back to their shophouse accommodation just before noon each day, whipping up meals for the band of 14. Huge portions of rice – necessary given the energy they required – were doused in a delicious lentil-based vegetable sambar. It was the simplest of combinations, but even the meat-lover in me enjoyed the meal. 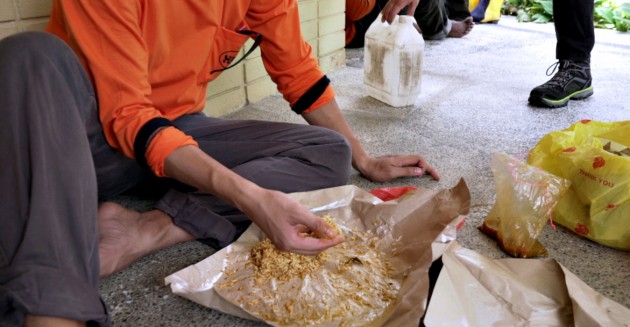 But if lunch was a pleasant surprise, dinner with them far exceeded any expectations. While unassuming in appearance, their thosai was among the best I’ve ever eaten. Unlike the ghee-laden varieties served at most eateries, theirs was softer and spongier, going perfectly with the coconut chutney. 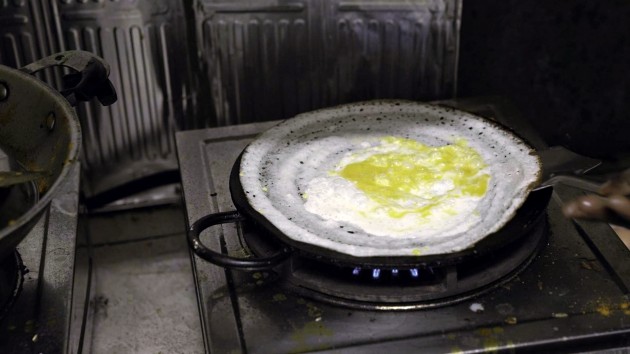 In addition to the thosai and chutney, we were also served chicken masala, chapati and a hearty scoop of dal. You can only imagine how embarrassed we felt with our pathetic pack of 20 chicken nuggets we bought for them in comparison. 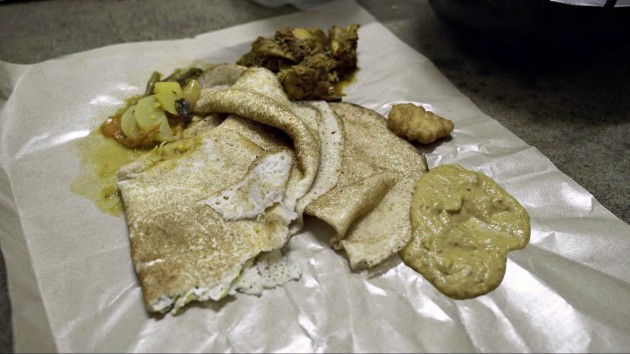 We can’t say if it’s the same for all migrant workers, but there’s no doubt that it’s a good thing these guys have their own cooking facilities. The autonomy of choosing and cooking their own meals beats most catering options which often skimp on quality and nutrition.

4. Singapore’s kampong spirit lives on in them

Some might say the kampong spirit of our grandparents’ generation – with an open-door approach and willingness to communicate – is something that has largely been left behind. But these were characteristics I found in the company of John Britto and friends.

Eating there, I couldn’t decide if it felt more like dining at an upmarket restaurant or my ah ma’s house – whenever we got close to finishing our food, they would suddenly appear beside us, ready to top our plates up again. 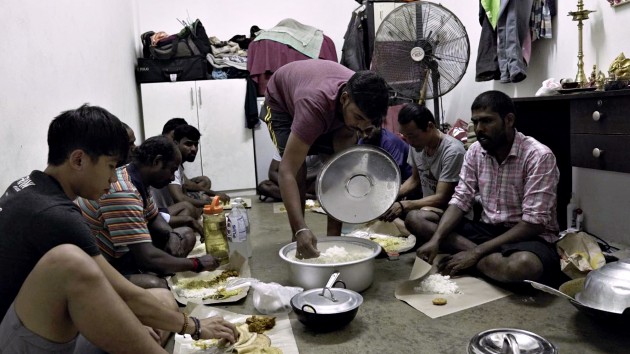 Due to the small dining area, they ate in two waves. And as the first batch ate with three of us, the second half of them took turns to serve. When first batch were done eating, they repeated in kind for the others.

It really showed how hospitality isn’t reserved to your guests, but everyone around you. Even the ones you may take for granted.

5. Their bunks aren’t the best but they do have wifi

I would be lying if I said their living conditions were ideal. A 3-bedroom apartment for 14 people. No beds. Cramped spaces. They slept on the floor – without mattresses – with the occasional lizard scuttling around.

But when asked about their living conditions, not a single one of the workers complained about their accommodation, even when probed. To them, this is just something they can live with, in exchange for money to send home to their families. 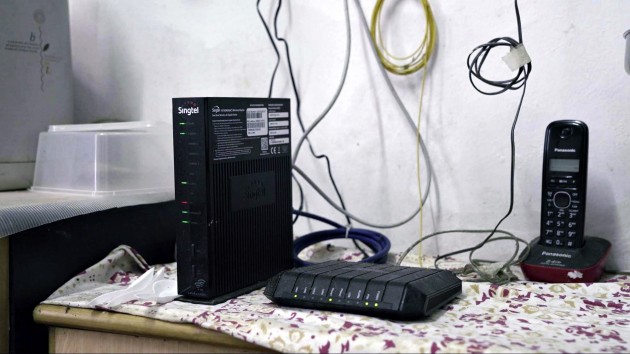 But just like most of us, they still look forward to sitting down at the end of each day in the company of their friends, and winding down by browsing through Facebook and YouTube on their smartphones thanks to their WiFi router. 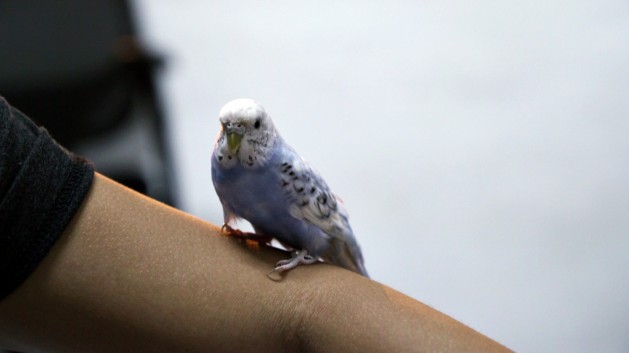 They even have a pet bird, though it did take a dump on John Lim’s shoulder.

Their living conditions can definitely be improved, but its wholly admirable how appreciative the workers are of the little things in life. As we played cards together in their humble room, it really dawned upon us that you don’t need much to have fun with a few friends. 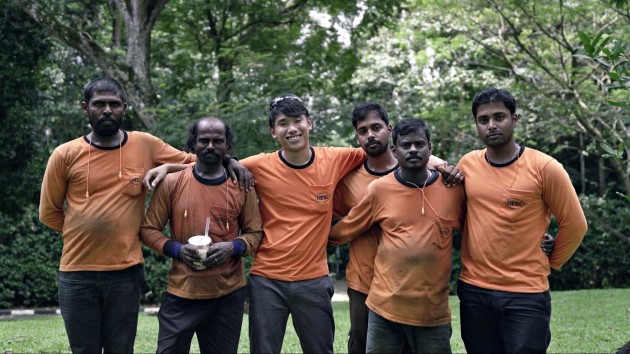 While all the migrant workers we met hail from Tamil Nadu, there is diversity within their group. The youngest were a pair of 24-year-old twins, Kumaresh and Ganesh, who’ve been in Singapore for the past two years. The oldest was Ramu (second from left) aged 47.

From P.E. teachers to chefs, some of them held very different jobs back in their home country.

But what’s even more intriguing was how within a small shophouse apartment, they were able to accommodate for differing religious beliefs. A few of them were Roman Catholics, while the others were Hindus. Idols and posters from both religions lined the same hallways, from a painting of Jesus Christ to effigies of Ganesha.

Perhaps aligned by a common goal – of working hard to save money for their loved ones back home – their ability to accept their differences while living in such close proximity was something worth admiring. After all, it’s all a fair reflection of the multiracial, multi religious society that they currently call home.

7. Migrant workers are experts of their craft

One thing is certain: these guys are good at what they do, and their jobs require a certain amount of skill.

Their day starts at around 8am each morning, depending on the park they are assigned, as they unload their equipment off the lorry and take up their respective positions. From grass cutting to shrub pruning, they run like a well-drilled system. 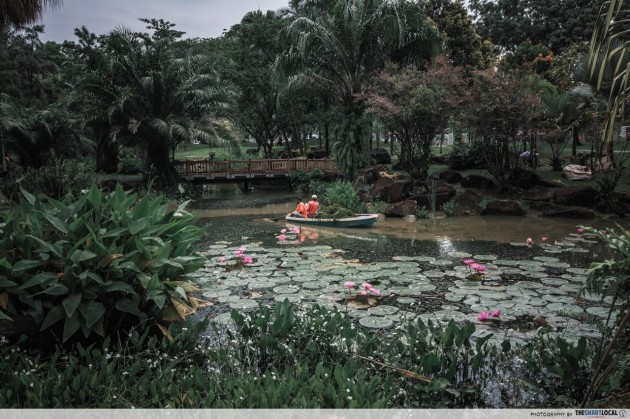 There are even a few “boat operators” amongst them

John Lim first tried grass cutting and lasted for barely an hour before he was pulled out for the simpler task of leaf blowing.

To the workers, it was all about teamwork and efficiency as several combed adjacent grass patches at once, almost in sync. Making the dangerous job look deceptively easy, they swung the heavy machinery around expertly, ensuring no blade of grass was left untrimmed. 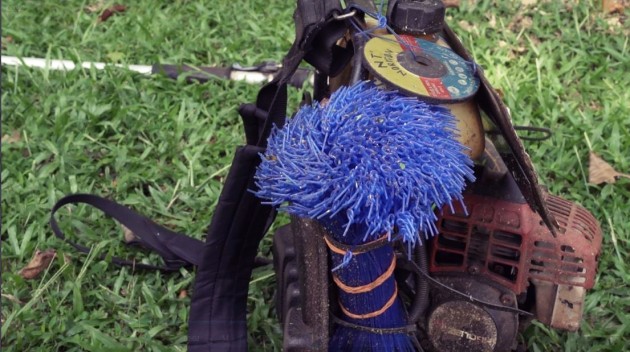 The blades their machinery use dull after a certain time, but the workers know exactly when to replace each blade. Just by feeling. 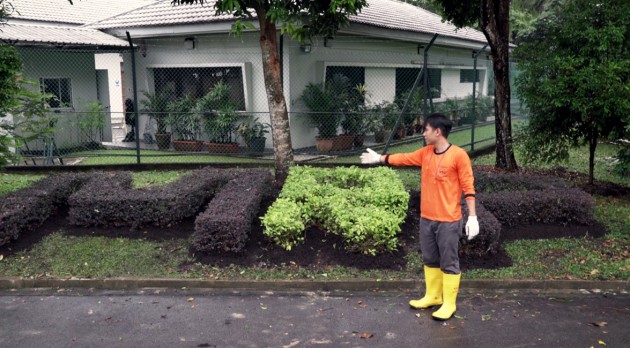 Ever wondered how manicured plants manage to stay perfectly in shape? Well, they don’t. Once again it’s thanks to our country’s very own professional gardeners. 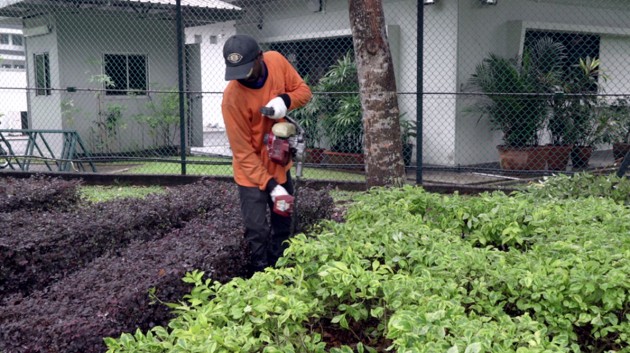 And as with any outdoor job, they are often at the mercy of the weather. It’s not easy being out there in the blistering Singaporean heat but they do prepare themselves well – with probably the biggest water bottles I have ever seen. 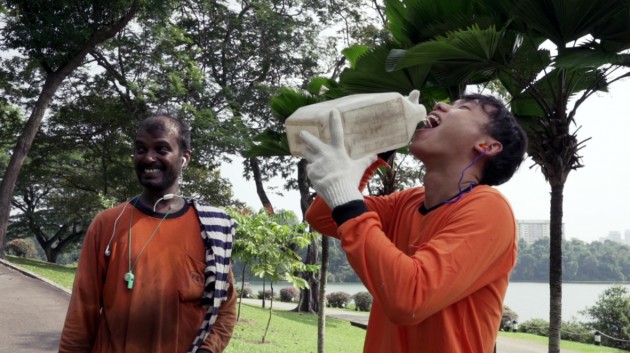 But there isn’t much they can do about the rain. Singapore’s bipolar weather switches from scorchingly hot to wet and rainy at whim, often leaving them stranded at the nearest park shelter. Just like what happened to us that afternoon.

With a schedule to stick to and each park to be completed within several days, they can only hope to for the rain to pass and to resume work again.

An eye-opening exchange with our country’s unsung heroes 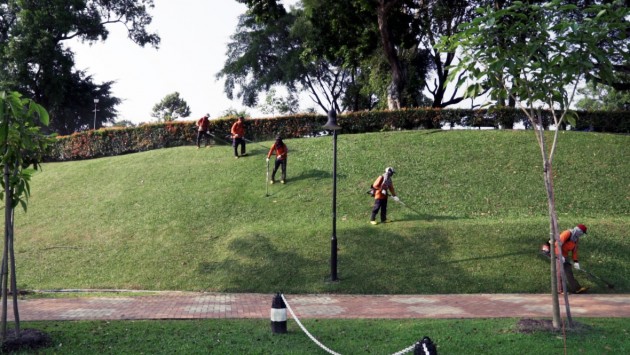 While 2 days is too short and our sample size was pretty tiny, the experience offered valuable exposure and insight into their lives – as well as allowing me to make new friends from a vastly different background. Since our short meeting, I have even coincidentally met and chatted with my newfound friends a couple of times, as they tended to parks across our land.

Ultimately, the main point our experience has driven home is that each of these guys is very much like us. And as they live in and contribute to our country, we should strive to integrate them into our community.

Whether it’s through volunteering at organisations like Migrant Workers’ Centre, a non-government organisation looking after the well-being of migrant workers, or a simple greeting each time you see them – respecting their contribution and appreciation can go a long way. After all, they – just like everyone else – have a story they’re waiting to tell. 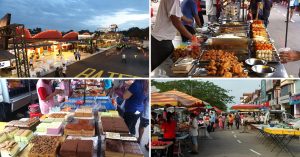 10 Undiscovered Night Markets In Johor Bahru For A Break From Lok-Lok & City Square Mall
6 Street Foods At This Pop-Up Food Street That'll Make You Think You're Out Of...