As if by clockwork, queues start to form at swanky hotels and pastry shops every September as salivating Singaporeans vie for boxes of premium double-yolk mooncakes. But even as we look forward to enjoying a vast assortment of festive treats with loved ones this year, these top eight childhood Mid-Autumn Festival memories will be sure to bring back plenty of great times.

8. Getting scolded when you point at the moon 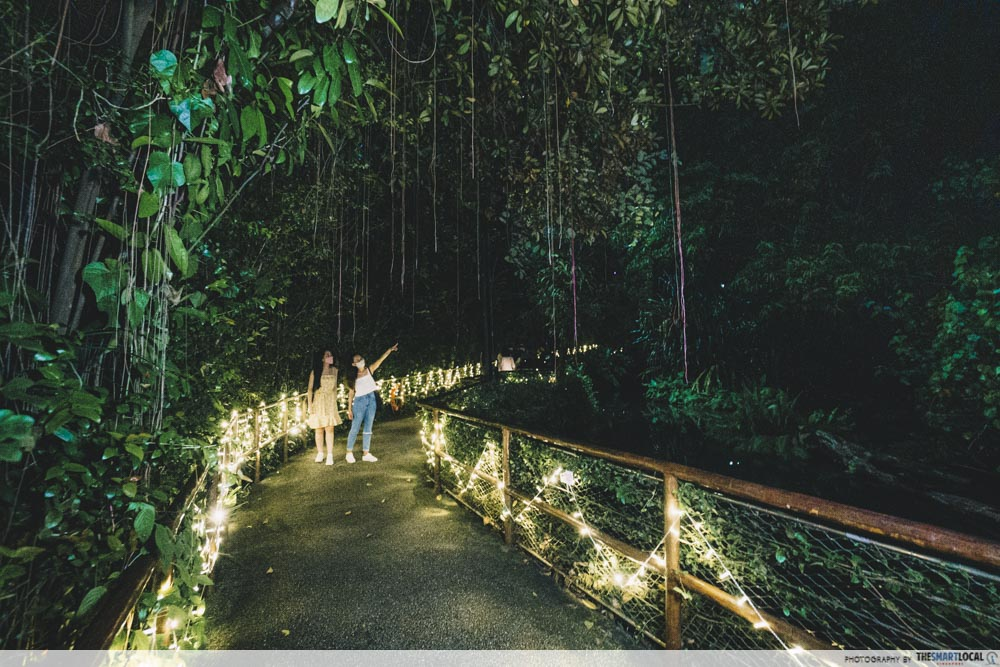 Be it a classic case of itchy fingers or mischievous kids testing the waters, it seems rather obvious what restless 10-year-olds would do when told not to point at the moon.

Of course, now that we’re all older and a little wiser, we understand the importance of the moon in Chinese culture. For many, Mid-Autumn Festival traditionally marks a time for thanksgiving to the Moon goddess Chang-E for a bountiful harvest.

But back then, our naughty little fingers might have crept toward the moon, only to be swatted down by frowning parents – accompanied by a stern warning that our ears might fall off.

Nostalgia level: 1/10. For those who were dealt the classic ear pinch, let’s just be thankful your ears are still intact. The rest of us can enjoy the good ol’ deeply ingrained childhood fear of pointing at the moon.

7. Jamming to earworms on battery-operated lanterns 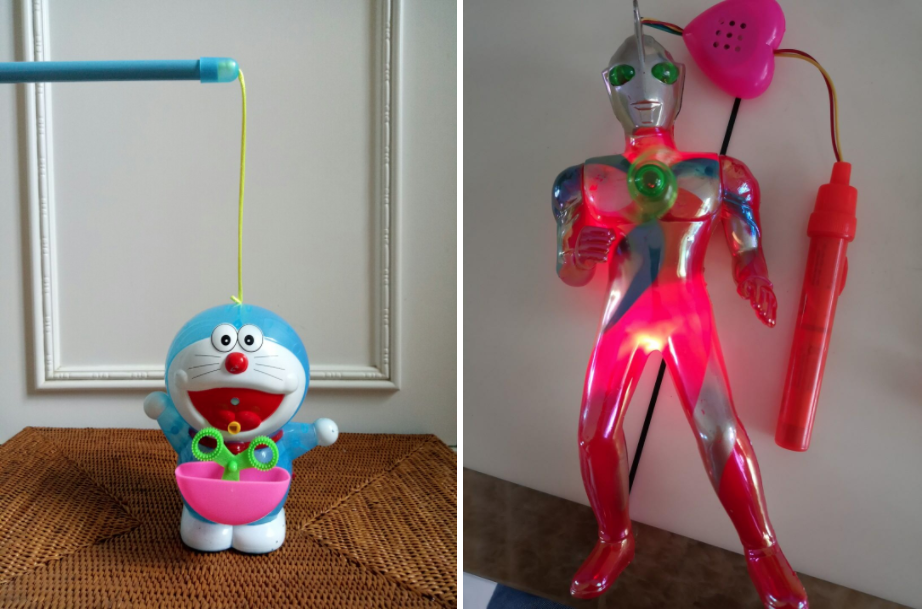 Fun fact: Doraemon doesn’t have ears. Perhaps he pointed at the moon?

Nothing screams the 90s like the shrill, eight-bit MIDI melodies of Doraemon no Uta or Butterfly blaring from our battery-operated lanterns as we awkwardly wandered around our void decks.

Aside from the cringe-worthy tunes, these lanterns had notoriously kitschy designs. It’s truly a wonder how we were perfectly happy to parade around the neighbourhood with these in hand.

On the bright side, these reusable lanterns might have helped us cut down on single-use waste every Mid-Autumn Festival, and even possibly avoided spontaneous conflagrations in the palms of clumsy kids.

Nostalgia level: 3/10. Points for safety and sustainability, but a solid no for the childhood embarrassment and earworms plaguing us to this day. 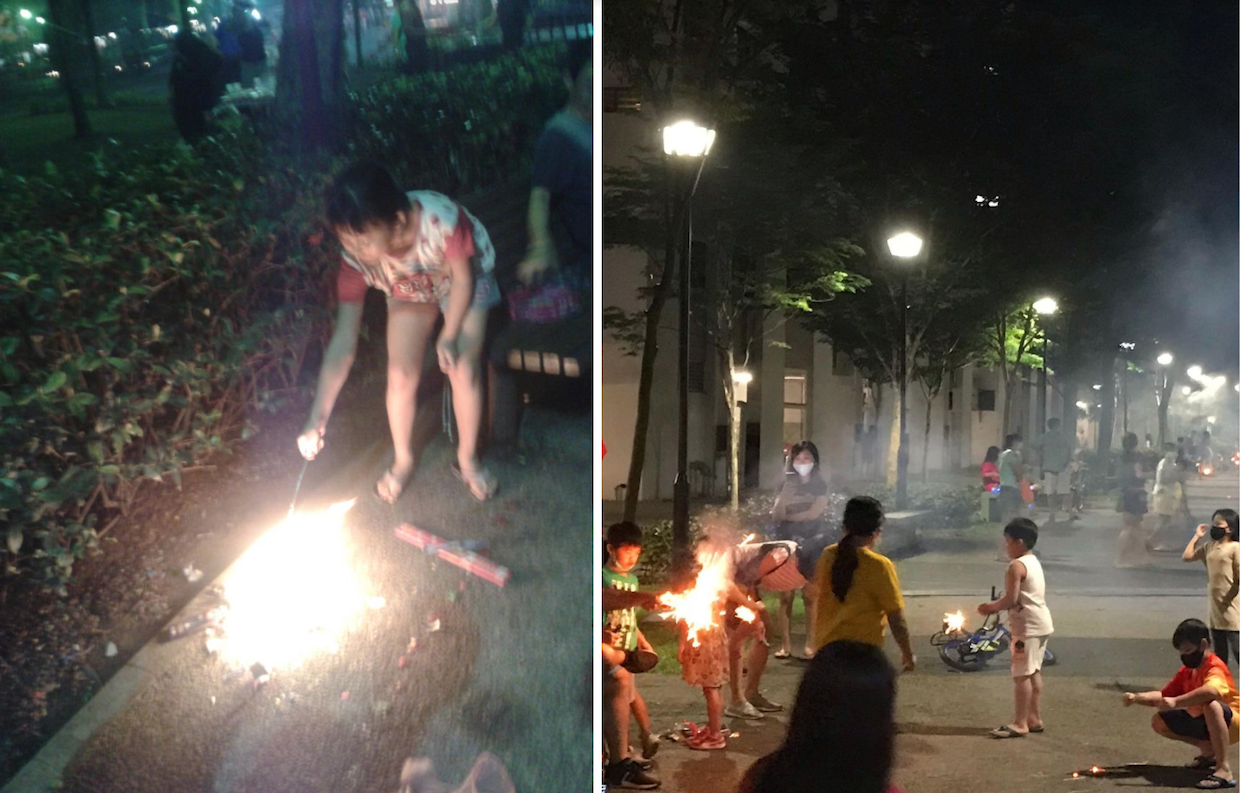 Especially on windy nights, swaying lanterns can quickly end up in ashes when the candle within topples.
Image credit: Juon Tan, @turey.toca

Thinking back, it wasn’t that battery-operated lanterns were lame. They just simply can’t hold a candle to OG ultra-flammable paper lanterns – especially when the festivities gave us the perfect alibi when they “inevitably” combusted.

With their extremely simple designs, paper lanterns required plenty of expertise to set up correctly. The process involved lighting a candle, letting some wax drip onto the base of the lantern to affix it there, before deftly pulling the accordion-like walls straight up past the flickering flame.

But as we all know, the thrill of wandering around the neighbourhood with a potential handheld inferno in tow was second only to the panic of actually experiencing the fire up close.

Nostalgia level: 4/10. Thinking back, a fireball probably isn’t the best thing to place in the hands of a screaming six-year-old. But even worse was getting “upgraded” to an electronic lantern.

5. Designing your own DIY lantern in Art & Crafts class For many of us, our DIY lantern experience started with plenty of chopsticks, colourful cellophane sheets and tape.

But whether we ended up proud owners of award-winning lanterns or concluded with a crumpled heap of plastic, the best part of the session would be the lantern walks we got to go on afterwards. There, we put our handiwork through its paces – gingerly making our candlelit rounds around our school compound.

Nostalgia level: 5/10. While it was a great chance to unleash our creativity, things often went awry – refer to #6.

4. Scratching your head at cheem quizzes and riddles at school 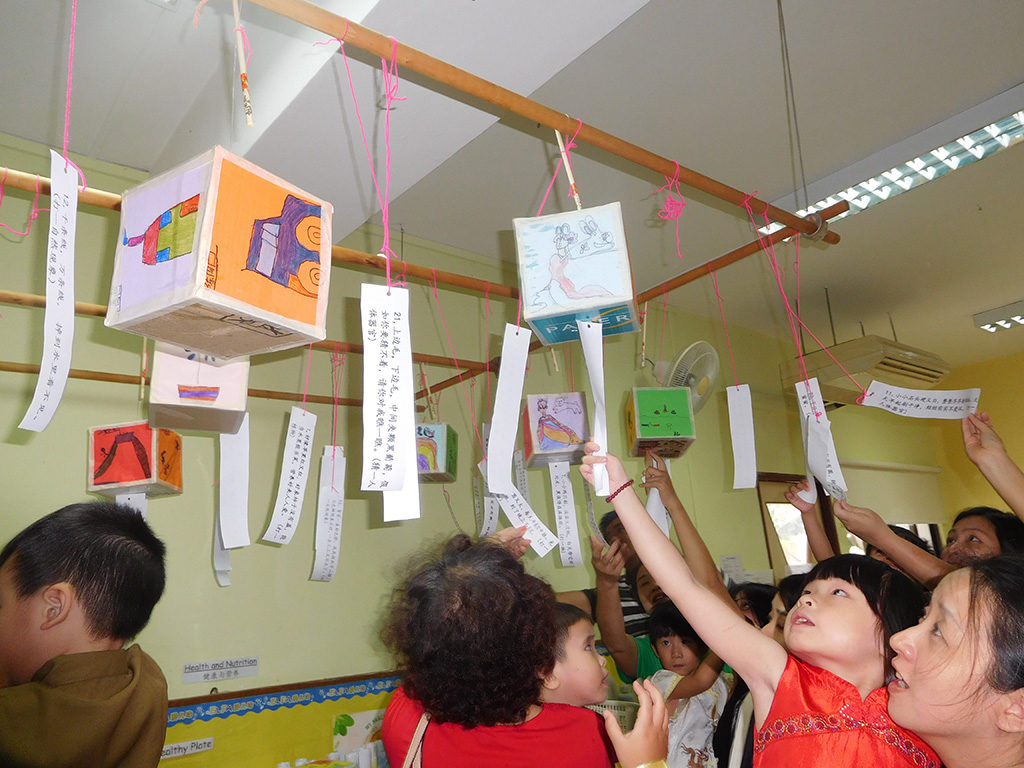 Lantern quizzes put both your Mandarin skills and mental sharpness to the test
Image credit: ELFA

From cheering for friends in Chinese Dance to putting your skills to the test deciphering tricky lantern quizzes, Mid-Autumn Festival celebrations at school were quite a hive of activity for many of us.

But especially for those who got to experience evening lantern walks with friends and activities like crosstalk showcases or even manyao performances, it’s hard to think back on these times without a tinge of nostalgia.

Nostalgia level: 5/10. Even for those among us who jiak kantang, these traditional activities and performances hold a special place in our hearts. 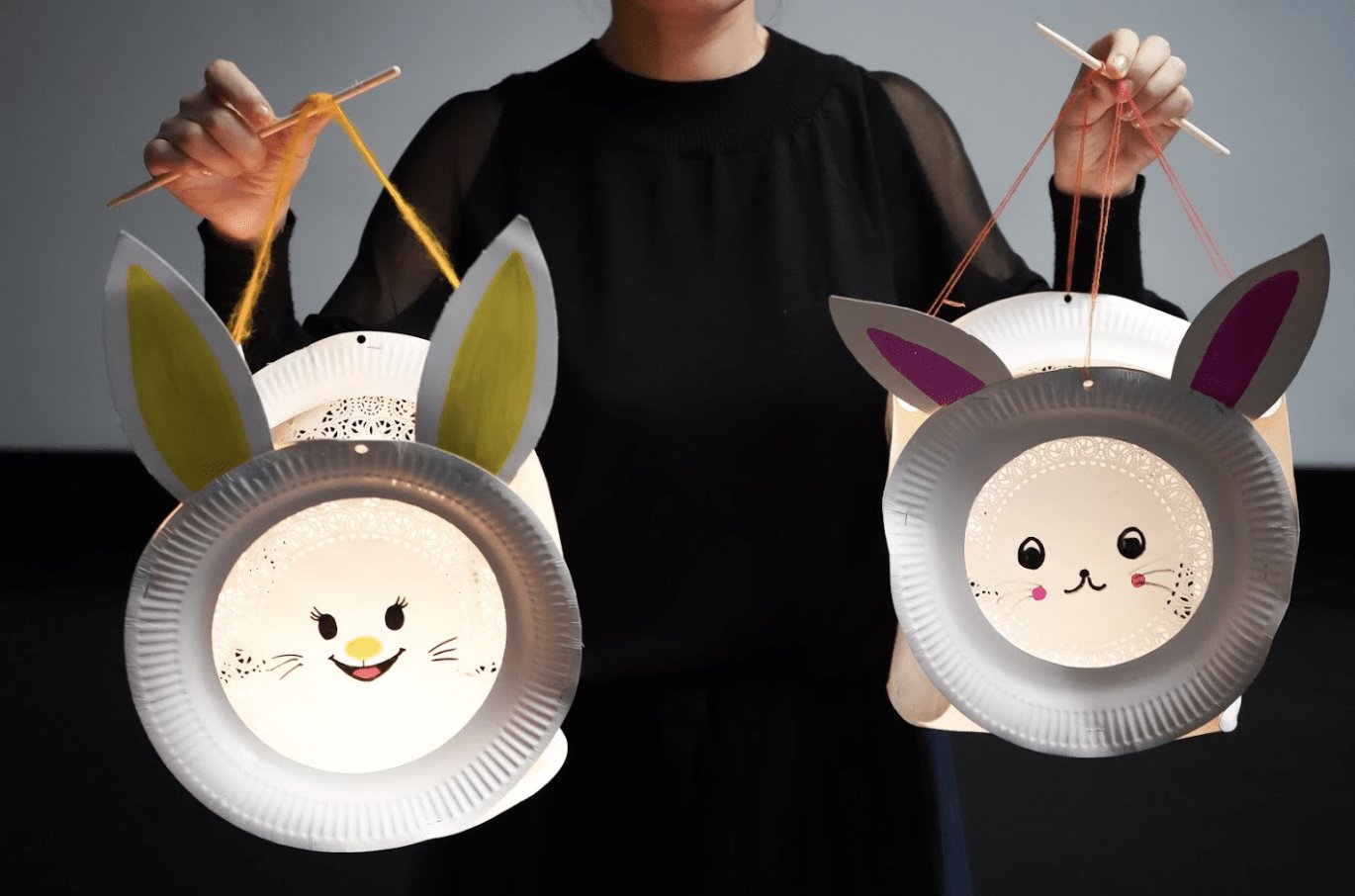 There’s a long list of legends and myths surrounding the Mid-Autumn Festival, and a longer list still if you count the variations of each of them. From the tragic star-crossed love epic of Chang-E and Houyi, to secret messages smuggled in mooncakes, there’s probably plenty of tales most of us have not even heard of.

Our favourite is that of the Rabbit on the Moon:

As the story goes, three heavenly immortals came to earth disguised as starving old men. They chanced upon a Fox, a Monkey and Rabbit, and asked for some food. The Fox caught fish from a nearby stream, while the Monkey easily clambered atop a tree to get some fruit. But the Rabbit, who could only offer the grass it ate, lept on a fire to offer itself as a snack.

Touched by the ultimate act of sacrifice, the immortals took the Rabbit back to the moon, where it can be seen to this day as one of the mysterious dark blotches. According to another legend, the splotches on the moon could also be the shadow of Wu Gang endlessly chopping a self-healing osmanthus tree.
Image credit: NASA

Nostalgia level: 7/10. We all love a good story, and even in our adulthood, most of us aren’t tired of hearing these fantastical stories and their countless versions.

2. Going to the park connector with the whole family to soak in the atmosphere These days, many of us might opt to celebrate Mid-Autumn Festival with a drive down Chinatown for a speed-run through the dazzling light-up. But for a chance to spend quality time with our whole family, nothing quite comes close to the night walks we’ll go on with the whole family – a great chance to unwind while different generations frolic under the full moon.

Nostalgia level: 9/10. Packed schedules and hectic days are the norm these days, and a relaxing evening stroll with the whole fam is a luxury we’d indulge in any day of the week. Now, we’d even patiently tolerate orders to strike a pose every 10 steps for a group photo.

1. Eating mooncakes the old-fashioned way with pomelo and tea From swirly, flakey Teochew deep-fried mooncakes to some of the trendiest snow skin creations featuring mao shan wang, mooncakes are hands-down the most prominent part of the Mid-Autumn Festival. However, little bits of this time-honoured ritual seems to be disappearing with each passing year.

Not too long ago, eating mooncakes was a full-on family event that included tea ceremony, mooncakes cut according to the number of people in the family, and plenty of other seasonal produce like pomelo and yam served alongside.

But as life gets increasingly fast-paced and globalised, these small aspects aren’t as common now. Trendier treats like mochi mooncakes or even ice cream-filled versions have even superseded snacks like mooncakes shaped as rabbit, fish and even super-cute pigs packed in a basket.

Mid-Autumn Festival is a time for reunion and family each year, and this year’s lineup of events offers up plenty to see and do for all ages – letting you recreate some of these meaningful childhood memories for your loved ones.

Kick things off with the Chinatown Mid-Autumn Festival 2021 Official Light-Up and Opening Ceremony that will be livestreamed at 8PM on 7th September 2021. There, you’ll get a first look at the 880-metre long showcase, featuring 900 lantern pieces depicting various scenes of reunion and festivities – ranging from jade rabbits, mooncakes to pomelos and the full moon.

You’ll even spot a 12-metre-tall lantern centrepiece located opposite Chinatown Point, depicting Chang-E, the Moon Goddess, ascending through the mountains to her palace on the moon.

Gather your family and friends for a chance to win prizes during the lantern riddle video series that’s airing every Monday in September. It’ll test your knowledge of Chinese traditions during the Mid-Autumn Festival, and will be available until 27th September 2021 on the Chinatown Festival Facebook and Instagram pages. For those wanting to flex your culinary skills, have a go at baking your very own mooncakes with the specially-curated Kele baking kit ($14.90), which includes a virtual workshop led by Chef Hung from Kele.

You’ll also get to tune in to a sharing session by specialists at Pek Sin Choon touching on heritage tea blends that hail from the 1920s. This Zoom workshop will also be available for viewing on the Chinatown Festival Facebook page for free viewing. Mid-Autumn Festival is also a time for giving and appreciation, and the lineup of events includes a workshop on creative ways to upcycle and repurpose the many mooncake boxes you might receive throughout this festive season.

Of course – it’s not a festival without the festivities, and with the 360 Virtual Tour and Heritage Trail, you’ll be able to enjoy the Street Light Up up close and personal, while tuning in to volunteer guides to find out more about the historic Chinatown precinct. 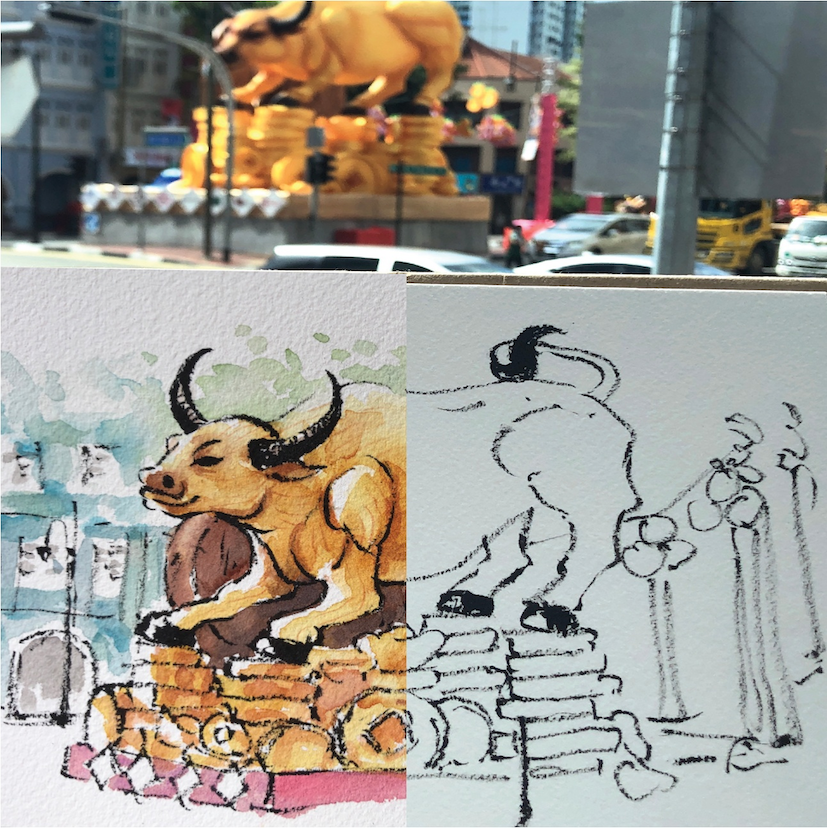 Get creative on a sketchwalk by Urban Sketchers ($100) or Fan Calligraphy at Yuehua Chinese Products where you can also try on and learn more about various Hanfu for free. The Chinatown Business Association is also organising activities like a zodiac animal lantern-making workshop ($6.50) or even a coding class to animate Chang-E’s journey to the moon ($39.90).

With plenty to see, do and explore virtually and IRL this Mid-Autumn Festival, it’s a great chance to spend meaningful time with friends and loved ones. From traditional Chinese tea appreciation and DIY lanterns, to 360º virtual tours and even themed coding workshops, you’ll get to relive fond childhood memories while learning more about Chinese culture and our unique heritage here in Singapore.

This post was brought to you by the Singapore Tourism Board.
Cover image credit: @lisa_chin88, @turey.toca, Carousell 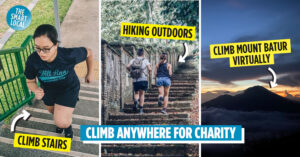 Community Chest Vertical Marathon Lets You Participate From Anywhere To Raise Funds For A Good Cause
Seafood Paradise At VivoCity Has 25% Off Dim Sum During Lunchtime On Both Weekdays &...