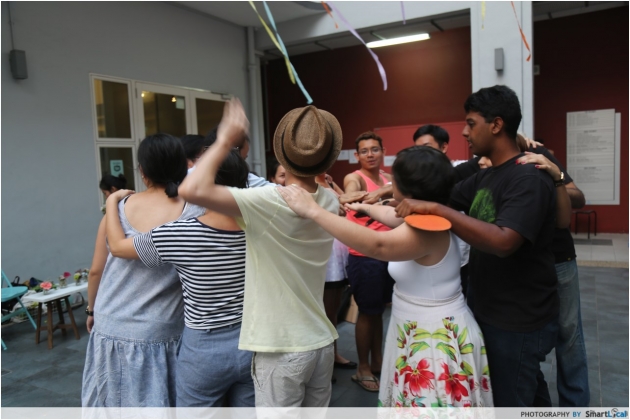 It was three days of dramatic performances, comedy, some tears, and a whole lot of friendship in this tiny community. This year’s theme was all about “walking the equator”, but I wasn’t exactly sure what that meant until I was drowning in confessional poetry, deprecatory monologues, and spoken word all weekend.

Here’s what you missed and why you should anticipate Lit Up 2015. 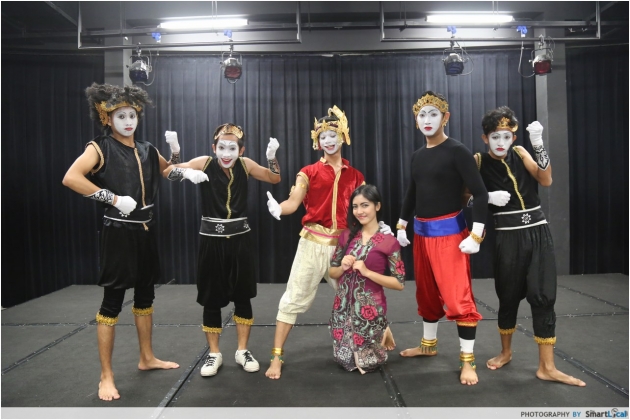 A Balinese troupe performing out of Indonesia for the first time, performers from Teater Kini Berseri were truly entertaining to watch. On Launch Night, the audience were treated to short, condensed versions of Prodo Imitatio – a monologue performed by Indra Parusha and Jayaprana and Layonsari – a pantomime by a group of six actors. 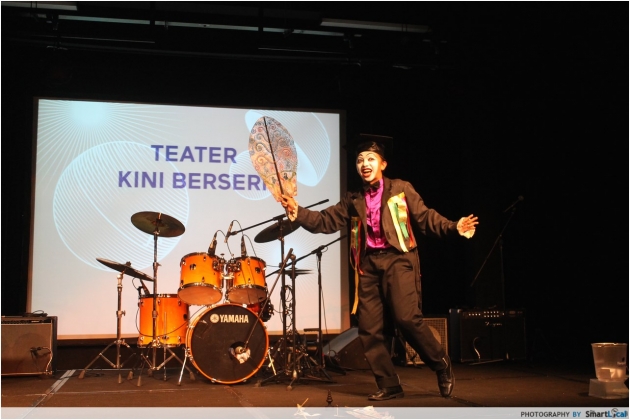 Prodo Imitatio was written by Arthur S. Nalan and is about the buying and selling of titles or certificates. It befits the subject matter by critically pointing out that this phenomenon reflects a much more insidious problem in society. 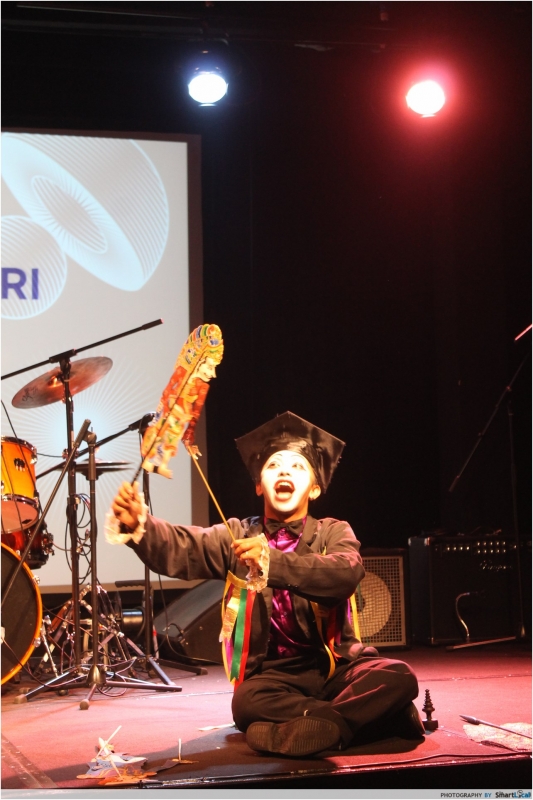 Indra plays a seller of titles who was arrested and put into jail by virtue of his business. People who drive the demand for these titles though, get away scot-free and even go on to become high-ranking officials in the country. He drew obvious parallels from this and the criminalization of prostitution – how the legal system punishes sex workers more severely than the buyers of sex. I was sufficiently impressed by how keen and poignant this comparison was. 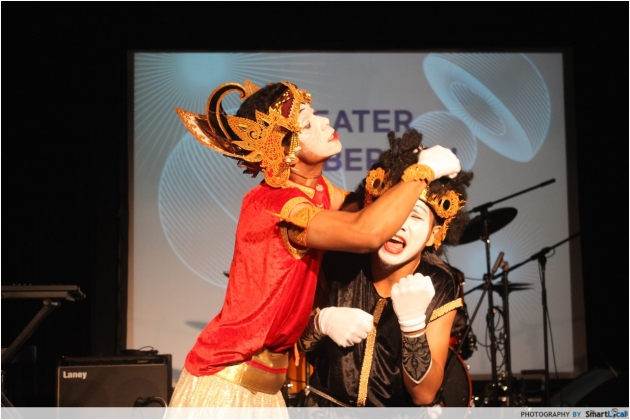 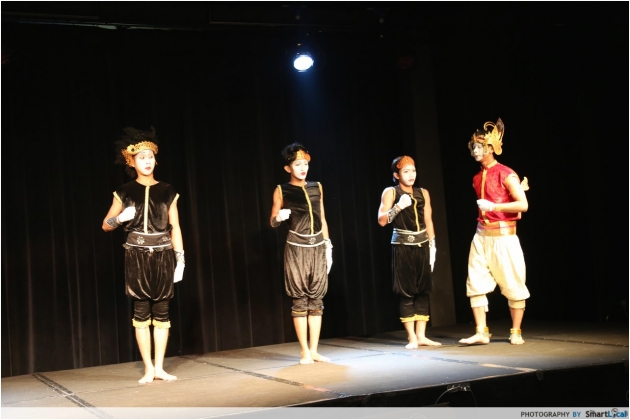 Jayaprana and Layonsari started off wacky and silly and before long you begin to detect traces of manipulation, social inequalities and hierarchy all weaved in and presented through a tragic and short-lived love story.

Jayaprana is an orphan, adopted by the King. He falls in love with Layonsari and marries her but his death was ordered by the King. Apparently that’s what Kings do when they see a beautiful woman; he shows neither remorse nor sadness when he appoints his guards to kill Jayaprana because he wants Layonsari for himself. In a cruel twist of fate, Layonsari loses her life soon after Jayaprana dies and the pantomime ends with the King in shock.

Teatre Kini Berseri gave me much to think about throughout the hour-long performances. Because it was performed here in Singapore, Indra had two weeks to translate the entire script into English, while juggling university and a business on the side. The strenuous task of translation aside, Indra needed to ensure he doesn’t forget any lines because any improvisation in English was a task that was next to impossible.This play was a much needed attack on the corruption and despotism that survive and exist within the tiny cracks of meritocracy.

I was teary eyed by the fifth poem recited. For the uninitiated, a poetry slam is a competition where poets go onstage and read original work. In this edition, Lit Up required the poets to work music into their poetry as well. 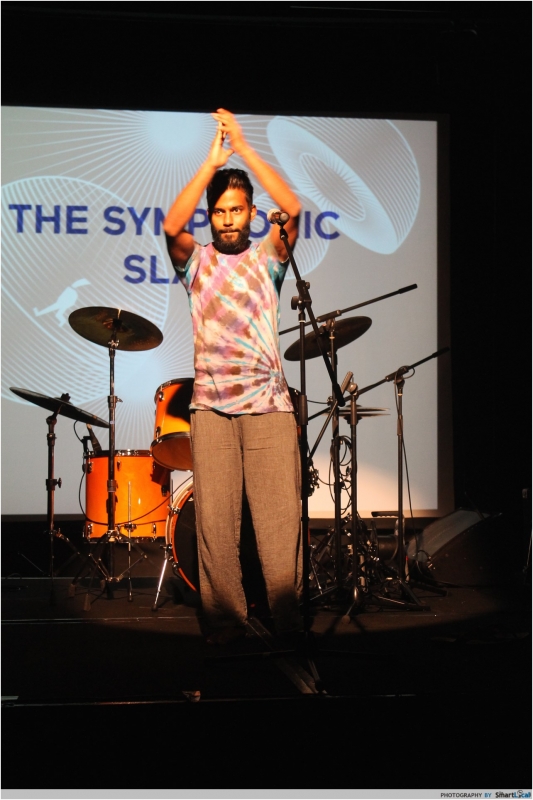 Most of their work were confessional style poetry, and revealed personal stories and tribulations. Lost love and relationships were common features, but the standout for me was the taxi uncle rap by Shivram. 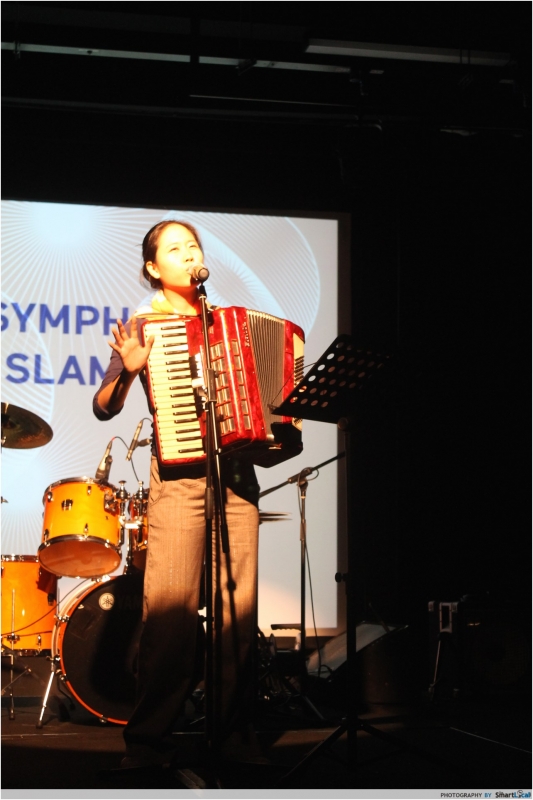 Music sometimes played up the somber mood but Victoria – winner of the slam of Lit Up 2013 – and her clumsy accordion playing here cracked us up. 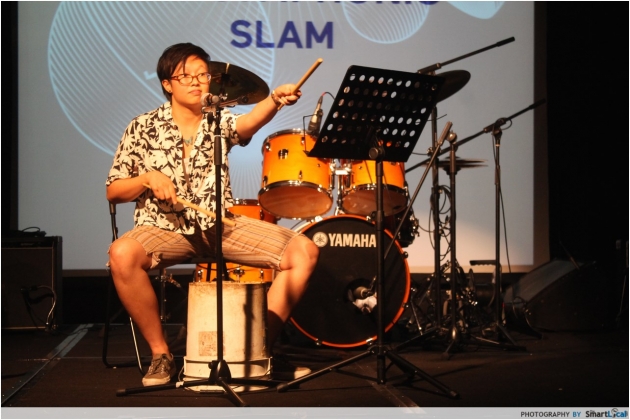 “Come on, sing it with me – I’ve got custard in my underpants” 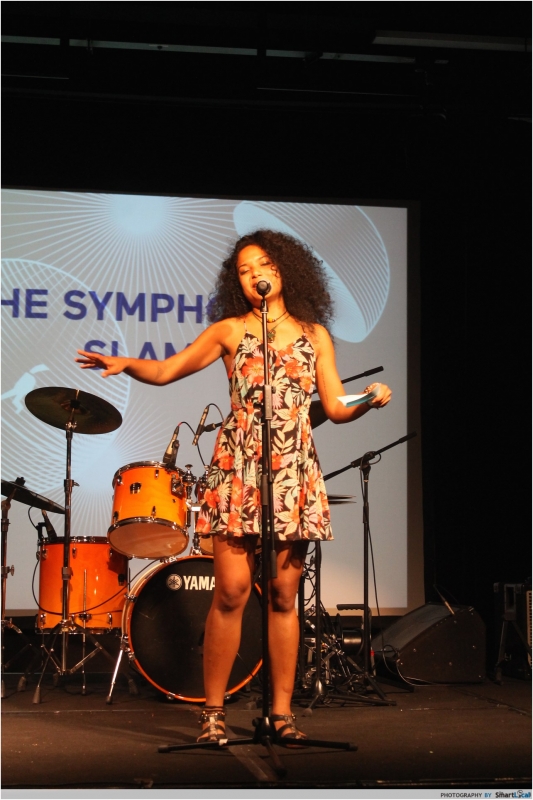 The final round of the slam was improv poetry with music accompaniment. Poets picked three words and had to come up with a poem using all three words. Some of the words include ketchup, arbuden, happenstance, sky, hyacinth and kiasu. I don’t know how anyone could have came up with coherent stanzas, but these people did!

This one saw the most amount of people in the hall. I caught The Sets and Seyra on the first night and they were so. good. Both bands are releasing albums in the coming months, and trust me you’d want to pay for their music! 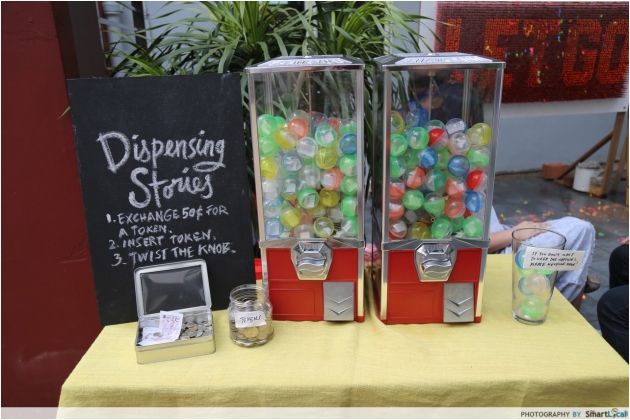 This is probably the first of its kind in Singapore. We’ve been to pasar malams, and probably flew all over the world to experience various cultural day-time or night markets. The reason why markets attract us so much is because they all have one thing – food. And this one has none. It’s still fully participatory though, MOE just plays on all your other senses and triggers instead. 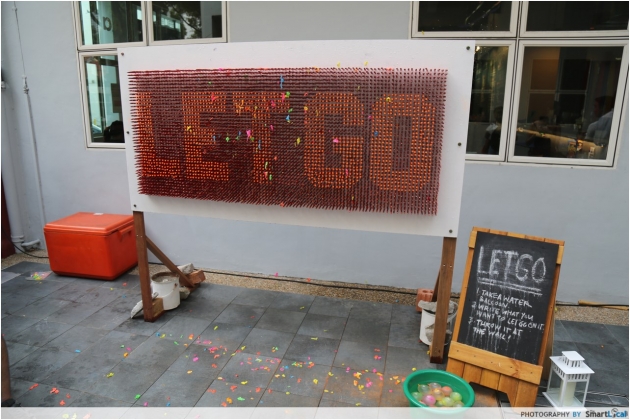 MOE was founded by Joanne and Norman who consistently try to bring us back to the basics. At their event last year in Kuala Lumpur they attempted to pair up singles through identifying people who liked similar scents. This year at Lit Up they filled a board with pencils and provided people with water balloons. They wanted people to let off steam in the simplest way. At the end of the weekend was a floor littered with ruptured balloons and hopefully, a courtyard filled with less heavy hearts. 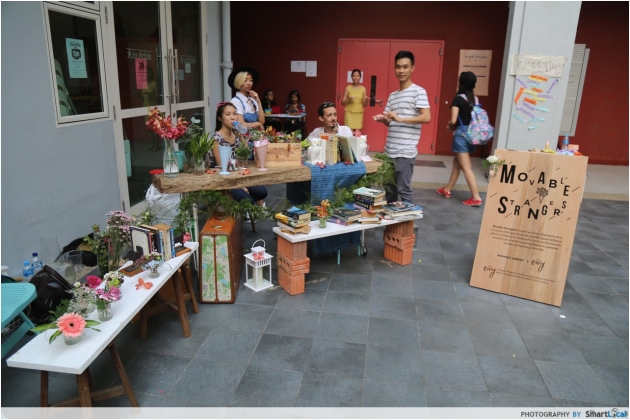 This one made me the happiest. With Every is an online florist who’s teamed up with Movable Library to give away donated books and cute little bouquets at MOE. They said most people were cynical, and were often asked ‘what’s the catch here?’ Well the catch is that bouquet isn’t meant for you to keep. That is actually the way you’re paying for the free book. You pay by gifting that bouquet to a complete stranger. One of the best ways to pay it forward, guys. 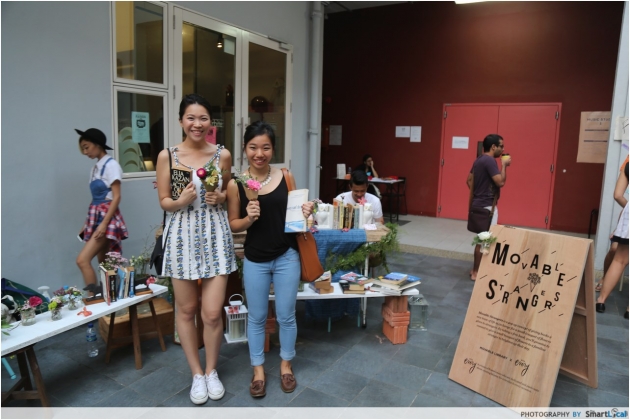 Here’s Jing and I, obviously very happy with our books. 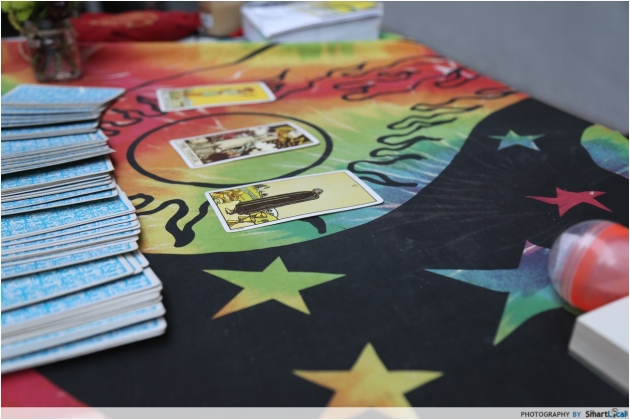 And this made me the saddest. As if tarot reading isn’t already ominous and dark, tarot poetry? I was given a short poem by Paul after my reading, a reminder in writing that poetry is powerful, and indeed most capable of evoking intense feelings. The next time you chance upon tarot poetry, think twice about receiving that poem at the end. But of course if you get a good reading, go for it. 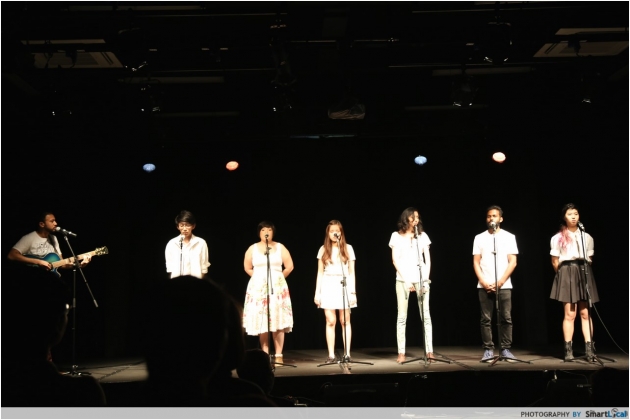 Performed by the Party Action People, it was full of laughs and satirical jabs at the society at large. The troupe of seven took turns to mock our digitally-saturated world, from game shows to news broadcasts.

The festival promised to cross boundaries and concepts through performances and experiential activities, and it has done nothing but that. From theatre to the market I basked fully in an emotionally and intellectually enriching journey. Marc Nair, funny man and Artistic Director of Lit Up 2014, gave a speech on Launch Night and said this festival aims to promote spoken word and to challenge dominant discourses and narratives. And challenge it did.