Gong Cha Girl For A Day

“WE WANT FREE BUBBLE TEA!” was the only response I got when I told the people around me I was going to be behind the counter of Gong Cha for a day. Yeah my friends pretty much have a one-track mind when it comes to bubble tea. What they didn’t know is that Gong Cha also won Top Brand under the F&B Kiosk Category, solidifying their presence as bubble tea stronghold.

I don’t know about you, but when I heard I got the chance to work with Gong Cha, I immediately obsessed over the 687 different combinations of milk teas with toppings I could make. Well 687 is obviously a fictional figure, but the quest to uncover all the quirky drinks you probably never thought of was one I knew had to be done by somebody. Well, I volunteer as tribute!

In addition to that I managed to uncover a few trivia on the side, here are some of the things I found out when I was Gong Cha girl for a day.

Because they only get one free drink per day! You’d be an immensely terrible friend if you forced that on your friend. Gong Cha employees are entitled to any one drink on the menu but that privilege doesn’t extend to loading up on additional toppings. Now that you know this, get your own bubble tea. 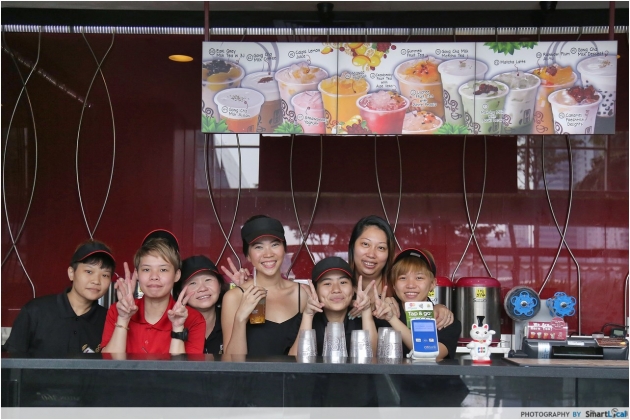 I always thought if you worked there you’d get a bunch of Gong Cha polo tees and pick whichever to wear to work. Nope.

Black ones are for the part-time and full-time staff. Red for team leaders, and blue is for supervisors. Do with this information what you will. It took Summer here six months to bump up to a red, and her bubble tea skills were.. deft to say the least.

3. Gong Cha staff get to pick where they work, and it’s not always about convenience

My colleague Chris worked for Gong Cha in November 2011 and he chose to work at the outlet in International Plaza. Only because he stayed right above it. Not many of us know where that is, nor do we know Gong Cha loves to set up shop in random corners in the island. 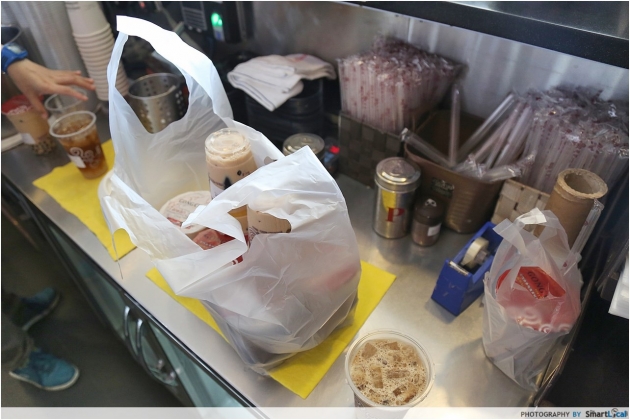 But Summer, Iv Wen, and Jaslyn here all picked to work at the Marina Bay Sands outlet because they enjoy working all the time. MBS Gong Cha is actually the most crowded Gong Cha around!

Newcomers are observed for a good three days when they start, and if they pass this – good grooming, hygiene, pleasant attitude etc – they get through to the next three months of probation period. Bar staff will have to attend a hygiene class after a month of working because without it they aren’t allowed to make you drinks. 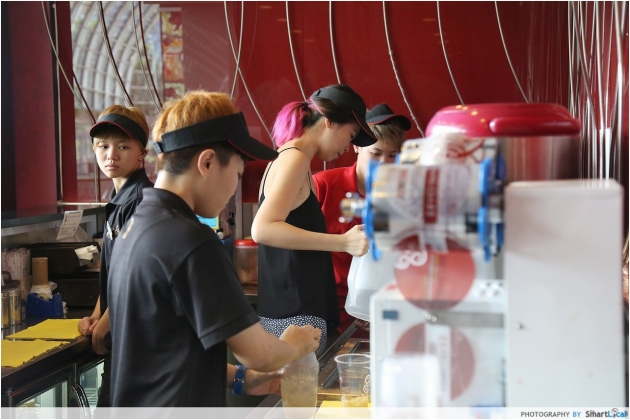 Spot me! Don’t worry I didn’t feed any of the drinks I made to unsuspecting customers.

I know that good service is the hallmark of any deserving food and beverage establishment, but how does one repeat the same 20 words over and over again? The counter staff unanimously agreed that the hardest part of their job is dealing with difficult customers, and it mostly revolves around last-minute change of orders. 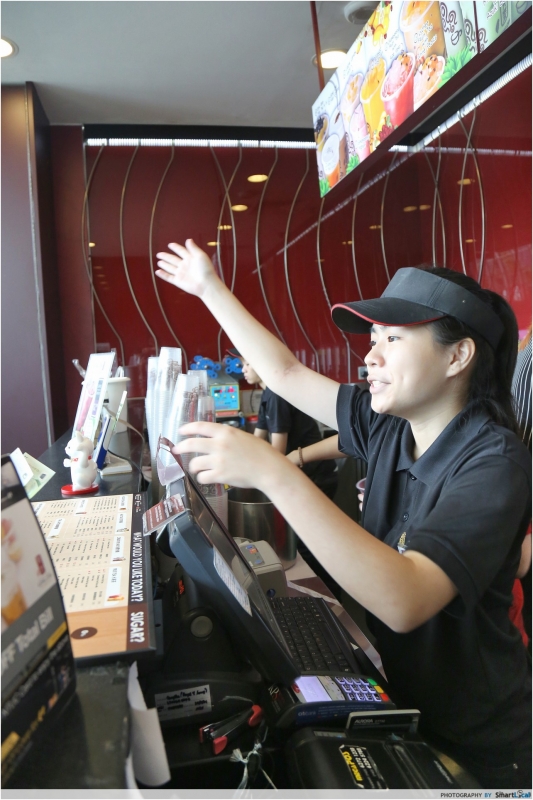 This is why last-minute changes aren’t cool. To ensure all the brewed teas and toppings remain fresh each time they switch to a new batch there will be a time sticker attached to the containers. This will remind the staff to empty whatever is left and prepare new ones. 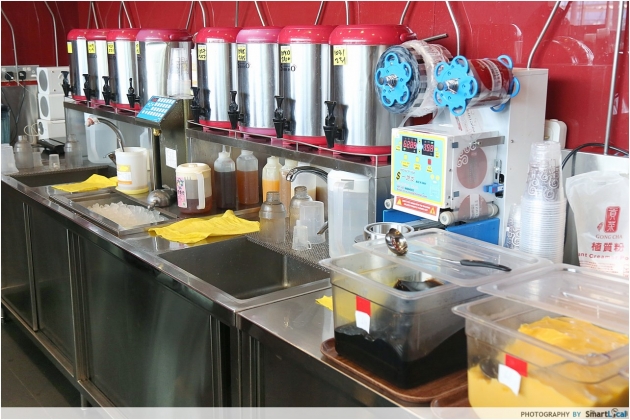 Each change is carefully recorded and at the end of the day, staff have to account for how much is left, how much was thrown away and for what reasons. Even the free drink they’re given has to be recorded in the day’s stock-take.

Ai yu, herbal jelly and the pudding all have a different ‘shelf life’ when it sits in the refrigerator. Staff have to perform daily, even hourly checks, on the ingredients that go into your bubble tea!  Your favourite bubbles are of course, prepared daily. Many times over, in fact!

6. Always feel free to tell them you can’t make up your mind

Somtimes, deciding which Gong Cha drink to get can feel like the hardest decision in the world. When this happens I go into default mode and order the most familiar drink. But whenever I hear the pop as I insert the straw and start slurping on the pearls I know I should have been just a bit more adventurous. 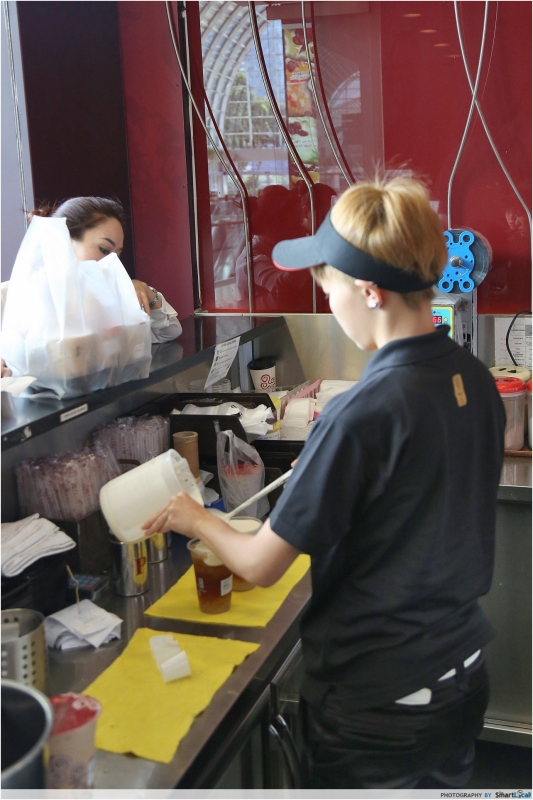 Or just buy half a dozen of drinks, that should rid the dilemma

The next time you go to Gong Cha, tell the staff you don’t really know what to order and have them make you whatever. Treat this as your daytime bar!

7. The hardest Gong Cha drink there is to make

I did a little probing around the stall and found out that the hardest drink on the menu to make is the Caramel Freshmilk Delights. The reason behind this is because they’re used to making the drinks as literally as it sounds. And Caramel Freshmilk Delights comes with pudding which they might sometimes forget about. I’m beginning to appreciate the lack of creativity in bubble tea names because it’s a tall order to memorize 70-over drink recipes and an even more commendable feat to make them within seconds of an order. 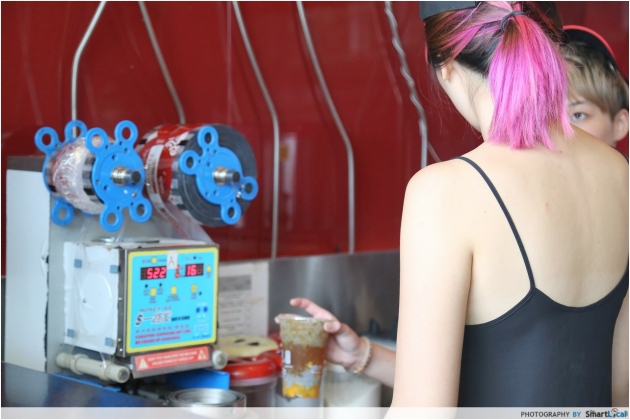 Here’s Noelle the Gong Cha apprentice and Summer telling me the syrup to tea to topping ratio.

8. Not everyone can be a Summer

I know practice makes perfect. But Summer’s speed is sort of unfathomable. She basically needs zero processing time – she reads the order off the sticker and gets to it like a freaking machine. 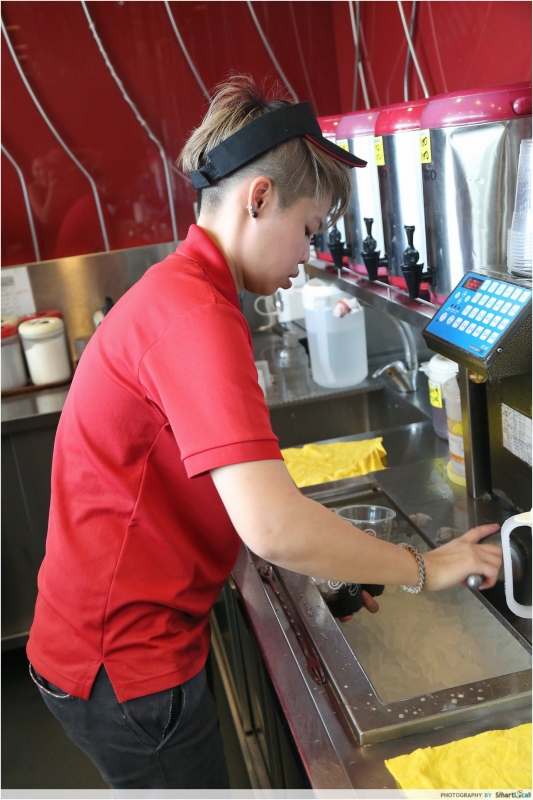 I don’t know which health-conscious smart alec came up with idea of altering the sugar amounts in your drinks but I’m pretty sure the people making your drinks appreciate this a little less than us.

There’s more to it than having a couple of buttons on a machine that read ‘30%’, ‘50%’, ‘80%’ or ‘100%’. In fact there are more than 20 of those buttons because the volume of syrup dispensed at the same level of sweetness varies from drink to drink.

9. Design your own drink 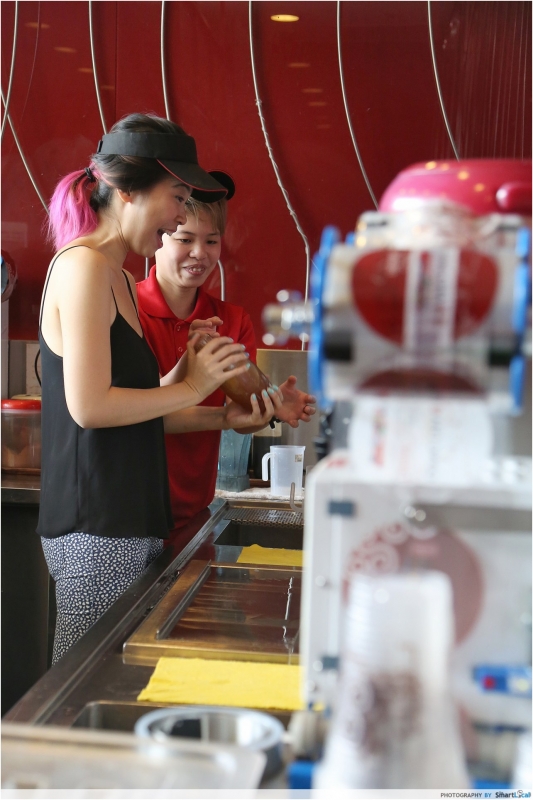 If you’d tried to order Earl Grey Milk Tea with 3J and tried to substitute some of the toppings with others, chances are you got rebuffed. Gong Cha is pretty stringent that way but here’s a little cheat sheet. The only customization you can get out of Gong Cha is within the Creative Mix section. In there you’re allowed to switch things up, for example, from Honey Green Tea to Honey Taiwan Black Tea, or from Grape Camellia Tea to Grape Oolong Tea.

10. The next five drinks you will be drinking from Gong Cha 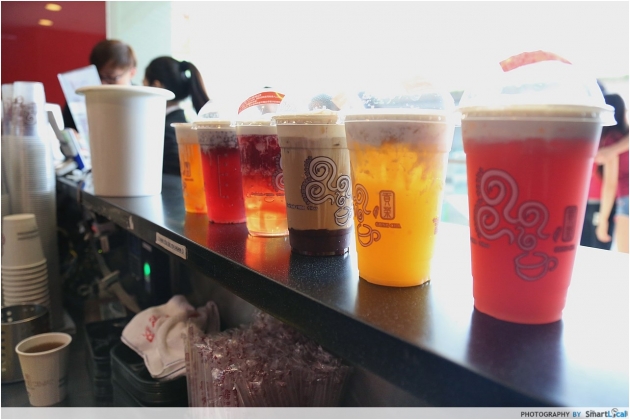 I saved the most interesting part for last! Remember I said my sole intention at Gong Cha was to concoct a bunch of different drinks? Well I did. Here are five quirky but tasty drinks you’d never thought Gong Cha could do.

This is light and refreshing, made super interesting by the slight crunch of the basil seeds.

Gorge yourself on the abundance of toppings here.

Would you go to Gong Cha for coffee?! Let this be the game-changer. Alternatively try the hot Ginger Milk Tea with Azuki Beans – equally awesome!

This is so you know there is a cereal option. It might go better with a hot drink though, cold cereal isn’t really my thing.

My absolute favorite in the list. I need to seriously thank whoever thought of this splendid concoction. Tastes like berry smoothie!

I came up with this one! Yes I’m pretty proud of it. I’m not going to tell you how good it is because you need to taste it for yourself.

Not quite Gong Cha Girl

I was definitely not expecting to transform into bubble tea mastro by the end of my stint. But I’ve learned that it’s much harder than I’d imagined. Service can get repetitive but the happiest thing about working here is working together with one another.

Team work has never been more evident than when an order for five cups of bubble tea comes in and the brewed tea in dispensers simultaneously run out. Staff glide around in a hastened pace, but never missing a step when they prepare the drinks. I suspect this sense of accomplishment is the biggest reason and form of reward for choosing this line of work.

The Royal T group now owns more than 60 Gong Cha stores island-wide. A big part stems from focussed, deliberate strategic planning. Ever wondered why queues for your bubble tea are getting shorter and shorter, as more Gong Cha kiosks pop up all around you?

Also, some of Gong Cha outlets are really, really tiny. Resolving to sacrifice a bit of space in some of their kiosks in order to ensure that there’s at least one Gong Cha in just about every neighbourhood seems to be their winning recipe. Little wonder why consumers have selected Gong Cha as their preferred Top Brand under F&B Kiosk category per the Influential Brands study in 2013 and 2014 conducted with Gen Y and Gen X respondents.

This post is part of Influential Brands 2014, where we highlight the most influential brands in Singapore.

0
SHARES
ShareTweet
Lit Up 2014: Theatre, Satire, Community And More
10 Thailand Destinations That will Change Your Perspective On Life 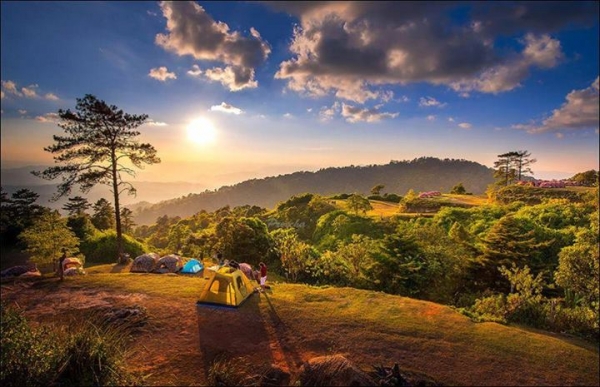