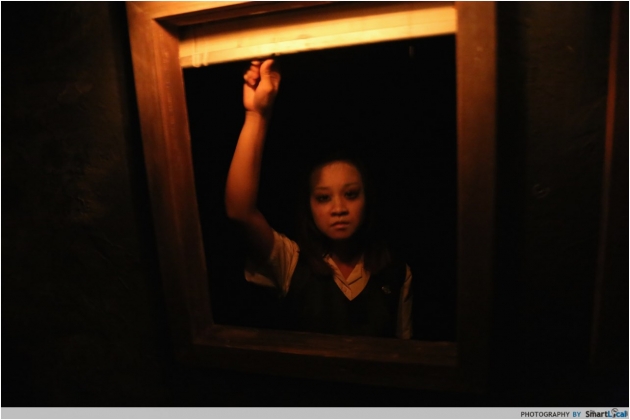 Halloween is upon us once again with ghosts and ghouls taking to the streets and bringing out our greatest fears. For the 4th year running, Universal Studios Singapore presents to you Halloween Horror Night, a spine chilling event that promises your worst nightmares.

A fairy tale theme park in the day, the USS themepark is completely transformed into an eerie playground by night fall. Gone are the friendly ogres and talking donkeys. The only smiles you will see will be from sadistic clowns reveling in your fear. I’ve never had the guts to go for the past Halloween Horror Night, but this year I decided to face and overcome my fears, once and for all. 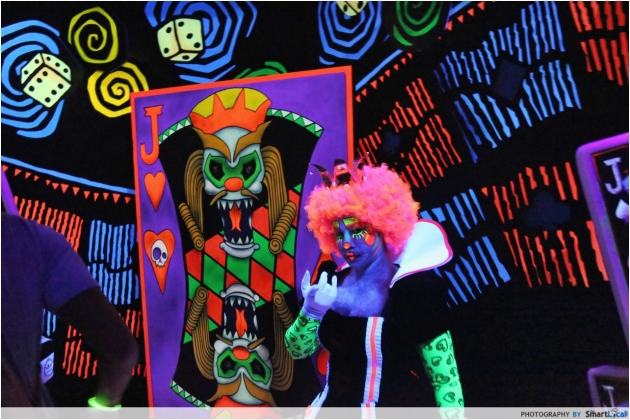 This year, there are 4 haunted houses and 4 scare zones. 8 massive areas of non stop yelling, screaming and hanging on to your friends for dear life, it promises to be a night you won’t forget… Here’s our first look at what you can expect this year at Halloween Horror Night 4. 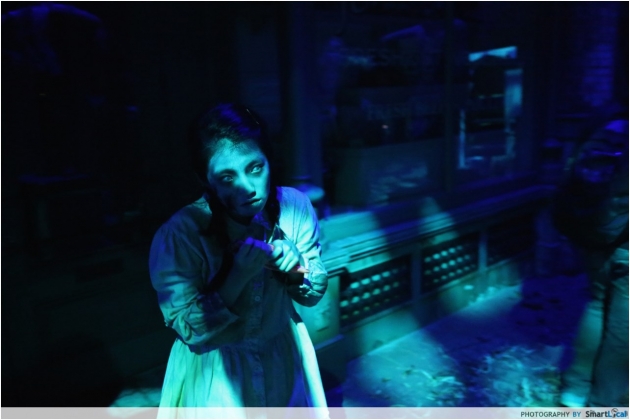 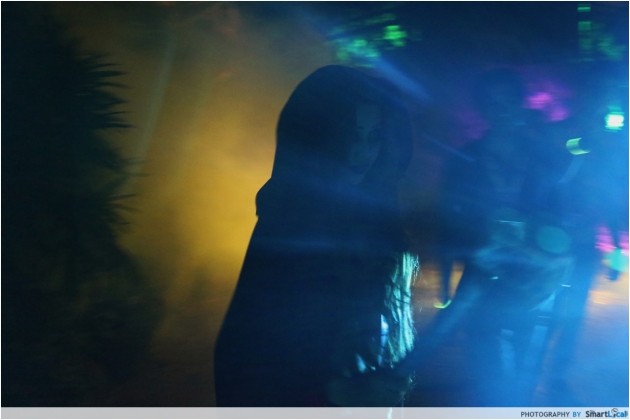 I recommend that you start your journey from the furthest haunted house, called The Lab, or The Laboratory of Alien Breeding. This is a secret site of human experiments by Aliens, leaving you with nasty and gruesome looking creatures as a result. Room after room of blood, gore and innards all around, I left this house with an icky feeling on me.

I’m not really afraid of sci-fi stuff and Aliens, so this house wasn’t as scary to me. But it was a great start to disorient anyone. 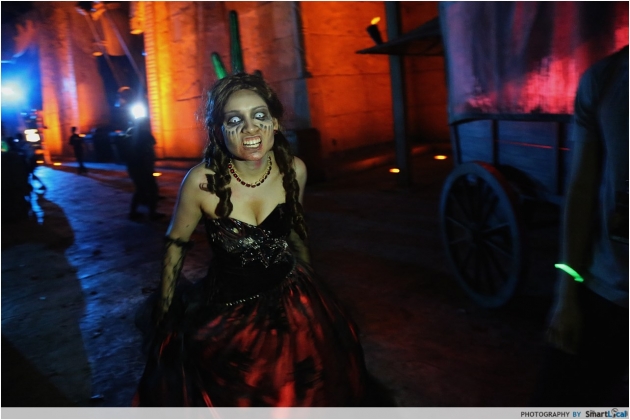 We moved on to the first scare zone of the night. Your favourite fairy tales are now Scary Tales as Rapunzel and Little Red Riding Hood transform from damsels in distress to vengeful villains taking you into the unhappily ever after. 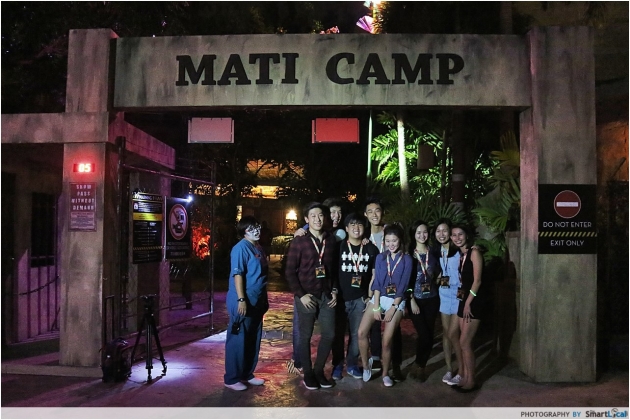 Army stories are always the hardest to consume for me. Having been through NS and experienced the fears of staying alone in bunk all night with all those stories passed down from generations of soldiers. That was the theme of Mati Camp.

Commanders were going mental, recruits and soldiers were hanging from ceilings and blood was everywhere. It felt like I was in a haunted concentration camp, not knowing what’s real and what’s not. From the bunks to armskote room and dungeons, I’m just glad I didn’t experience this before I went to army.

Scare Zone 2: Canyon of the Cursed 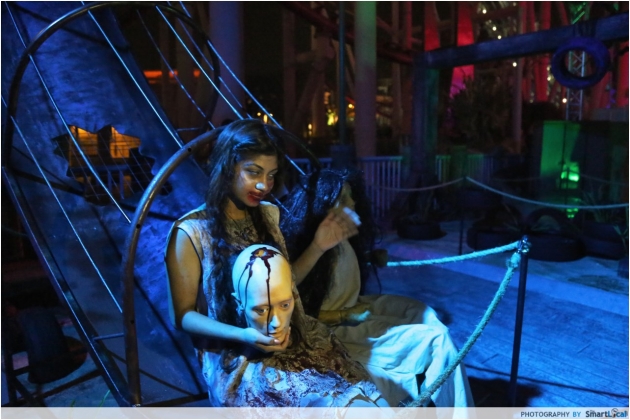 After Mati Camp is the Canyon of the Cursed, another scare zone themed from the mid-western 70s. These haunting faces come from everywhere and even sneak up behind you and breathe down your neck, leaving you running for your lives (or the next 5 metres before another living dead scares the living daylights out of you). 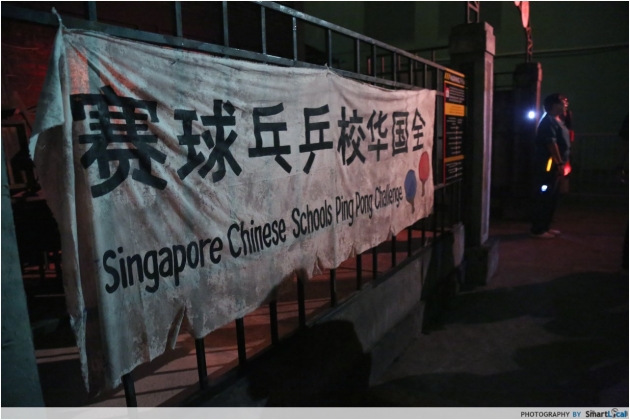 The next haunted house was Jing’s Revenge, a young schoolgirl who hung herself on the school premises and is back for revenge. Every school will have its haunted stories of suicides, past prison camps and hauntings. I, for one, was extremely terrified of such stories. 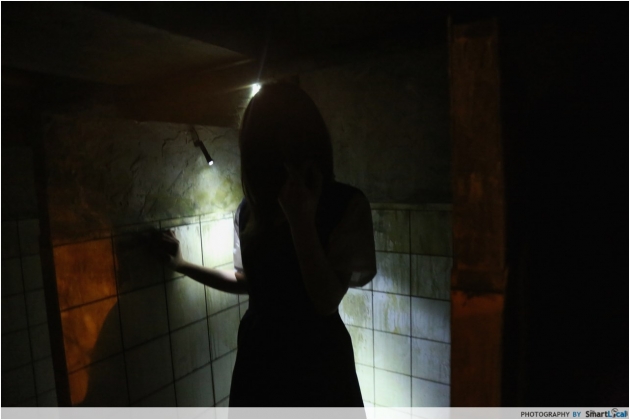 From haunted corridors and classrooms to empty toilets and school halls, this has got to be one of my greatest fears. What made it even worse were the tight walkways in this house which gave me a claustrophobic feeling when I couldn’t run from a girl that appears constantly from out of nowhere. This really brings your worst nightmares to reality. 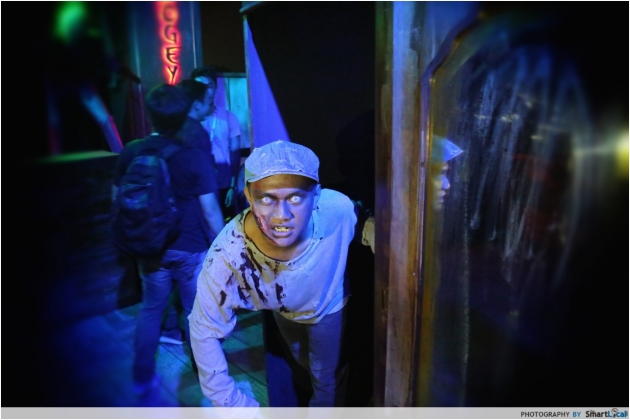 As children, we’ve all heard about the Bogeyman and feared of how he would appear from our bedroom cupboards to take us away at night. Knives scraping from within and silent, gentle knocks before the Bogeyman jumps out with his sinister laughter and takes you away. 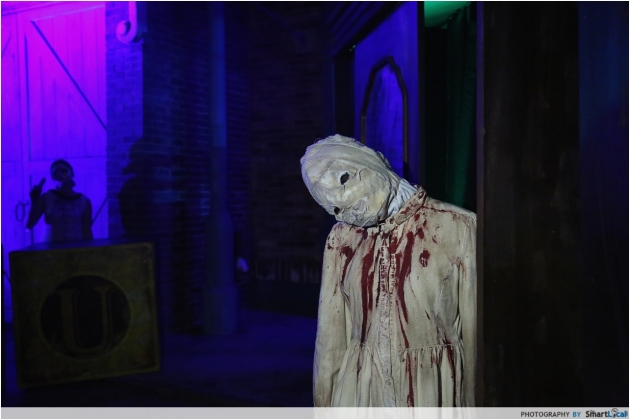 The Bogeyman scare zone is like a maze of the unexpected, from the damned children back for revenge to the slamming of cupboard doors and monsters jumping out of cupboards. 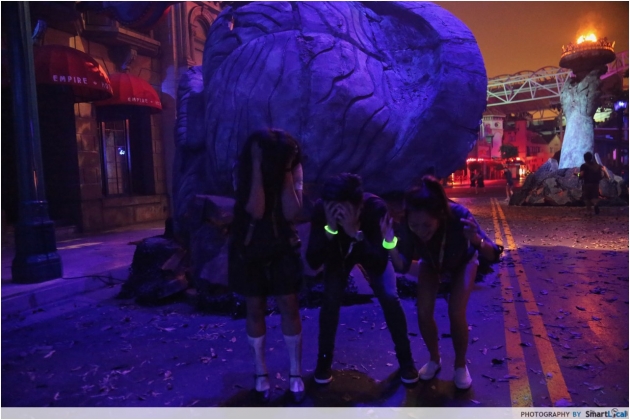 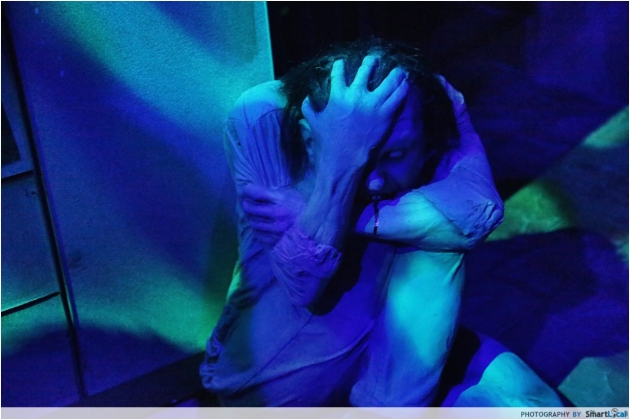 The evil minister has taken over the streets of New York and brought it down to the ground. He aims to destroy ever trace of life on earth and his demonic temptress Succubus sucks the life out of her victims with desire.

People are trying to escape and run for their lives while the demons hunt them down. Really something out of a movie, but right before your fearful eyes. 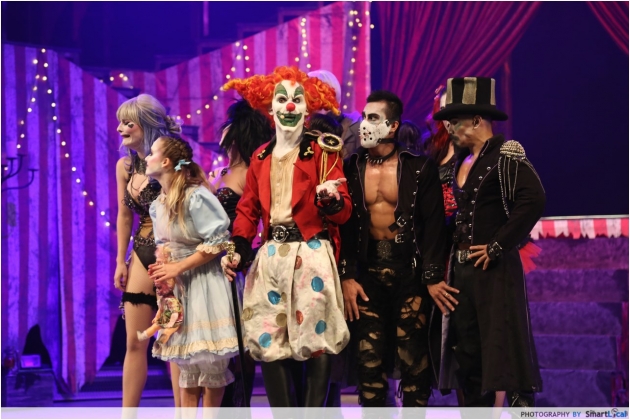 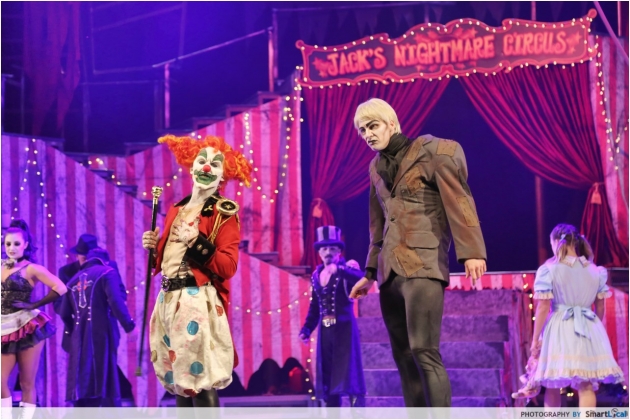 Before heading to the next haunted house, we caught a preview of what was to come, in Jack’s Nightmare Circus. It was a circus act with a whole host of tricks and stunts, and the talented actors were entertaining and engaging. This show is a must watch. 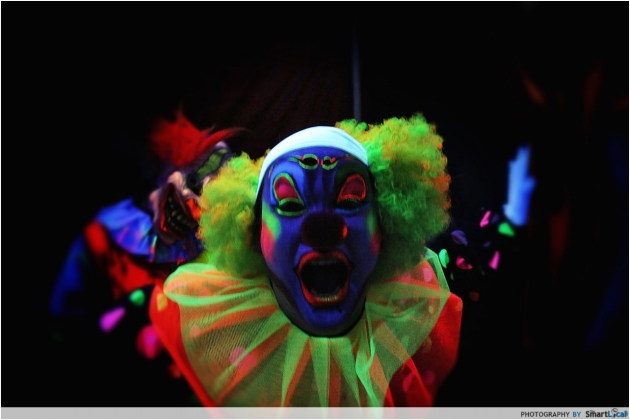 The last haunted house, themed from the circus show, was my ultimate worst nightmare: Clowns. I’ve always had a fear of anything in costumes, like dolls, lion dances and worst of all, clowns. I hated them, with a vengeance. Well, this haunted house just made me hate clowns even more. 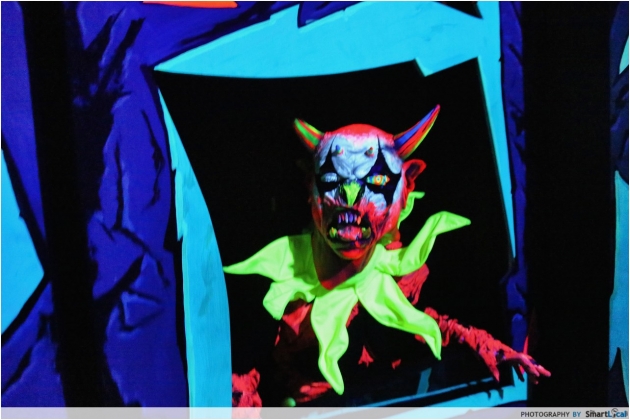 Named Jack’s 3-Dementia, this is the first ever haunted house that is 3D! The demonic clowns were literally out for my blood, and kept popping out from all over the place that left my heart in my mouth. Probably wasn’t the best way for me to end my night.

If you plan to act all macho and tough at HHN4, don’t go. It is best enjoyed by those willing to hold a suspension of disbelief, kind of the same way we enjoy horror or sci-fi movies. Doing so will allow you to fully immerse yourself in this living nightmare they have created. It is what it is, and as far as haunted houses go, HHN4 has done a fantastic job.

To maximise your enjoyment out of the experience, we recommend going in pairs or solo through the houses. One of our colleagues was so terrified she only managed to make it through one house. Even after we promised that would form a protective moving wall-ball around her!

My experience at Halloween Horror Night was a truly memorable one. Not only was the experience thrilling, it also helped me face up to some of my fears and conquer them. I am glad that I got over it and I would strongly urge everyone to head down to Resorts World Sentosa to have a one of a kind experience! 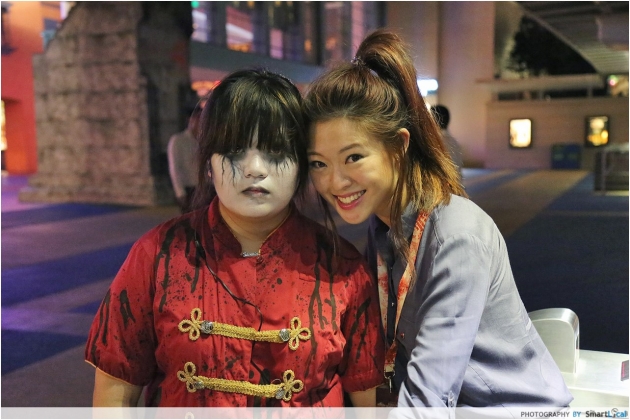 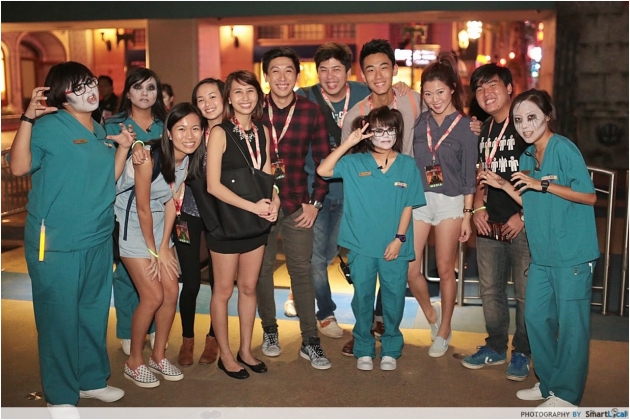 Here’s a sneak preview of Jack’s 3-Dementia brought to you by the Muttons from 987FM!

This post was brought to you by Universal Studios Singapore.