A Glimpse Behind Lightseeker 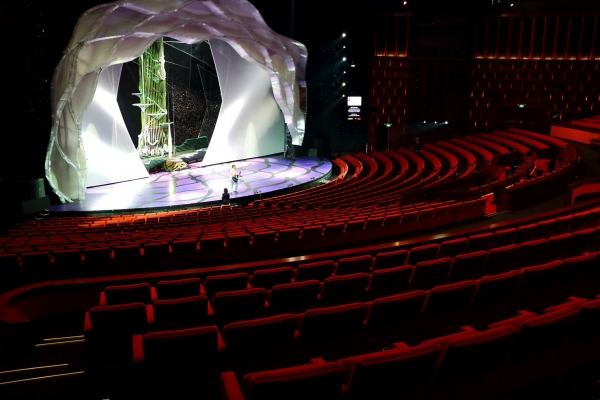 The stage at the RWS Theatre, which the magic begins.

Lightseeker is Resorts World Sentosa’s 3rd original production. You certainly get psyched up in the plush and cosy theatre, all ready to be enthralled by the famed cast, expensive production and “esoteric” theme.

I used the word esoteric to describe my personal feelings after watching the musical. While the underlying universal theme was power – one’s ability to make a critical choice at life crossroads, the flow of the story can get confusing.

My advise for readers who intend to check out the musical and have an enjoyable time is first to at least find out and understand the story-line on the RWS homepage. And another advice, have a “suspension of disbelief” as coined by poet and philosopher S.T Coleridge. Yes, you are going along to seek the Light on a magical journey. But whatever confusing moments the musical may conjure, you cannot but be enthralled by the spectacular acrobatics , stunts and impressive vocals.

We aren’t able to feature any pictures taken during the musical performance as all forms of photography and videography are disallowed. However, what we are able to share, is the visit to the backstage which was conducted by the musical producer, Wendy, giving us a rare glimpse of what goes on behind the scene. 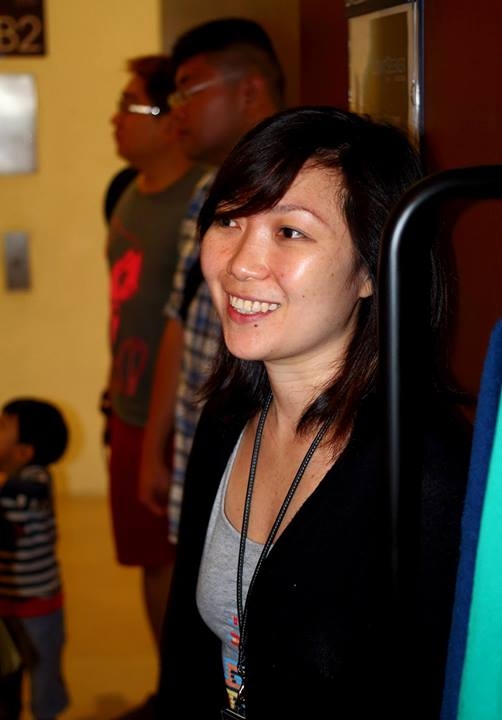 Wendy, the musical producer, showing us around backstage! 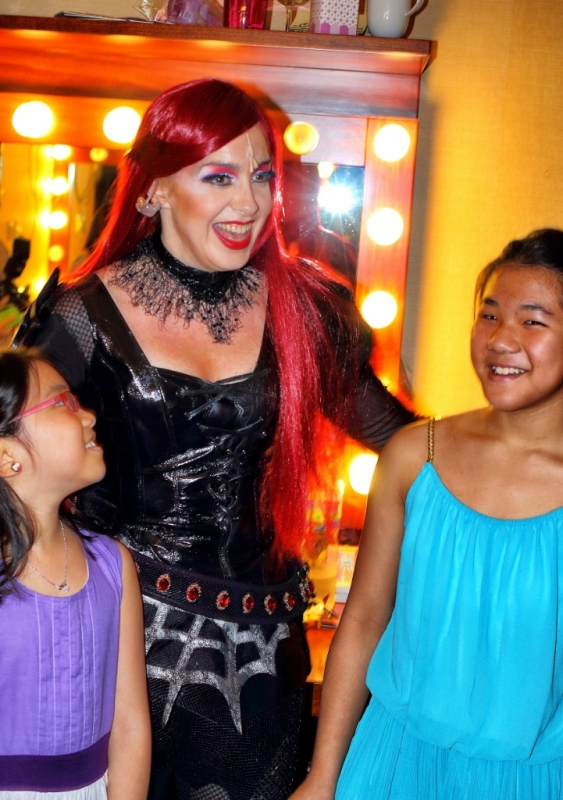 My daughters in the backstage dressing room of Vivienne Carlyle, who played Usha, sort of “witch” who helps the General to seek the Light for the Emperor (played by Singapore actor Lim Kay Siu, but he appeared only in a video projection).

Vivienne was so friendly in real life, so unlike her character in The Lightseeker. She patiently answered all our questions from how she managed to change her costumes so quickly down to whether her hair was real or fake. It was such a pleasure to meet her.

Unfortunately, we didn’t get to meet Stuart after the musical but we did snag an interview with him before the play! Check out Hevina’s interview with Stuart Boother.

Of course since I was super impressed by the set, I was eager to take a closer look at it during the backstage visit. I was really shocked at how light the set pieces actually were. 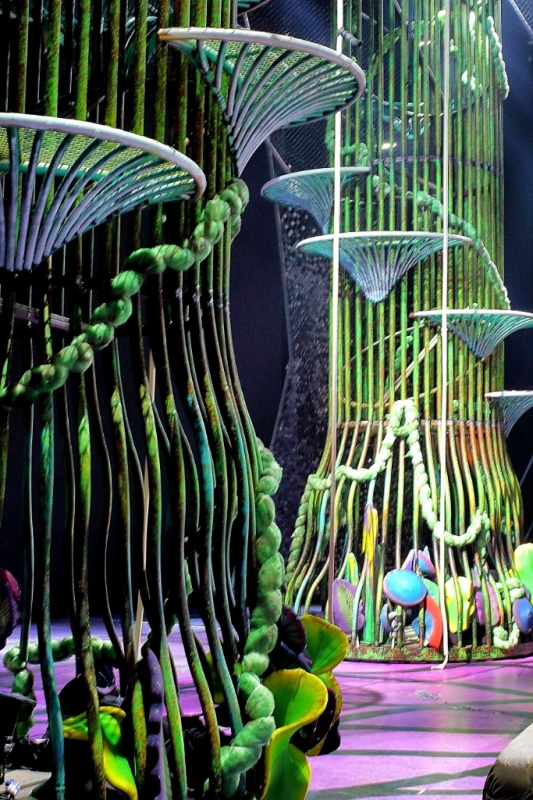 These were made of styrofoam and cotton wool! They look like they came from the 2009 film Avatar! 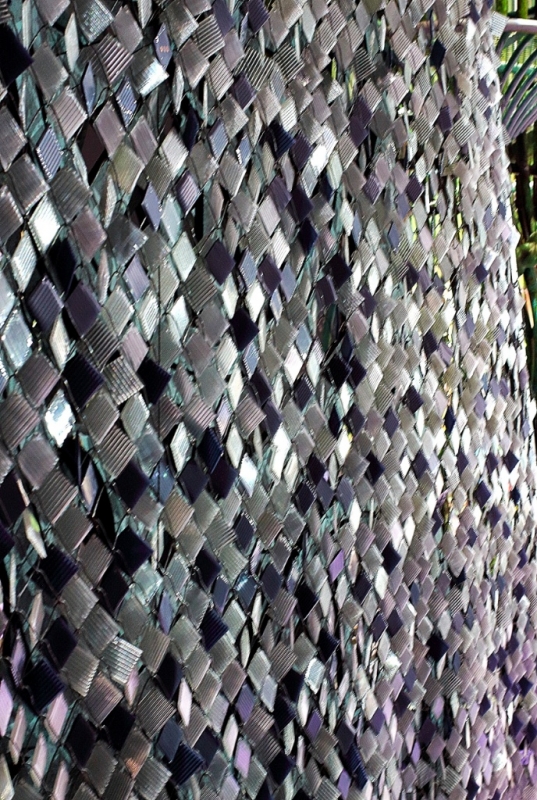 The shiny screen of one the sets, are simply pieces of reflective sheets, held together by …can you believe it? paper clips! Yes, you read that correctly.  Wendy mentioned many of the resort staff chipped in to help out in assembling this screen.This set piece was the blood and sweat of ALL the workers at Resorts World Sentosa who painstakingly clipped the sheets together.

Of course, a trip backstage is incomplete without a visit to the costumes, hair and makeup rooms! What blew me away was when Wendy said that most of the costumes were made by their trained in-house workers. I couldn’t believe it at all. 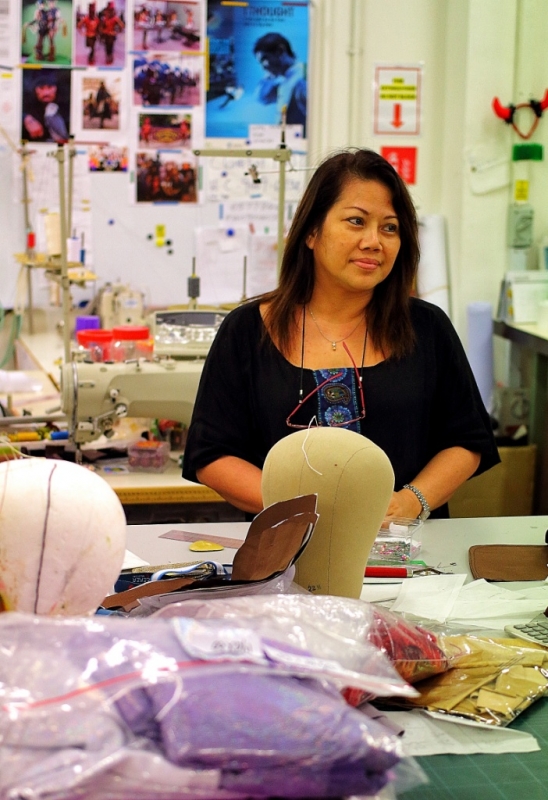 A RWS seamstress taking a light moment at the costume department. 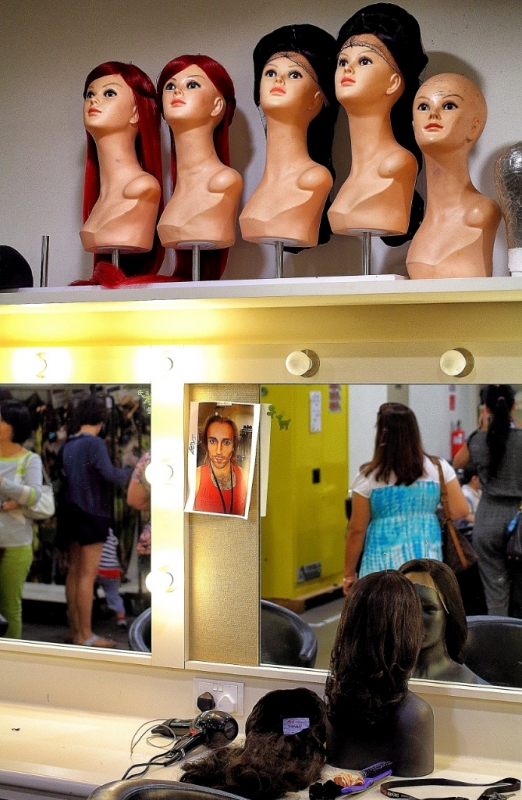 Of course, wigs are an integral part of the costume and make up. 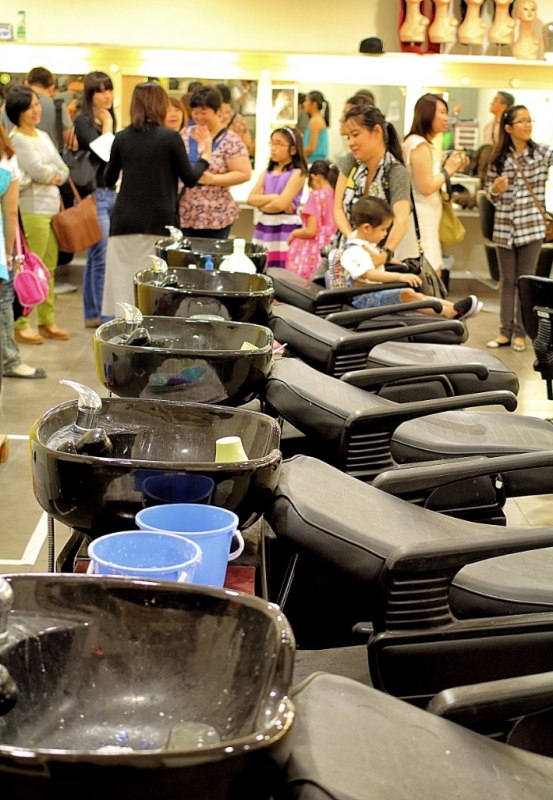 Fancy having a hair shampoo in the hairdressing department? In low tickets sales time, they may open up for outside business… just joking. 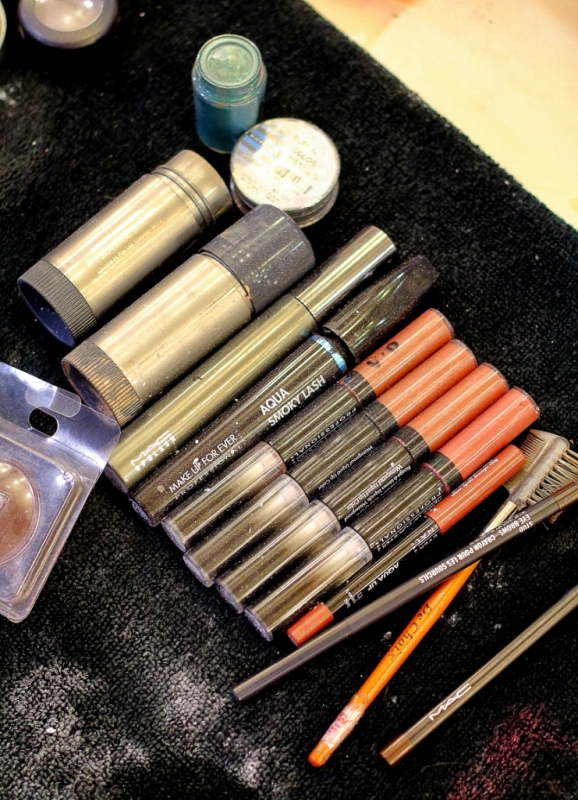 These make-up are not just for the ladies… 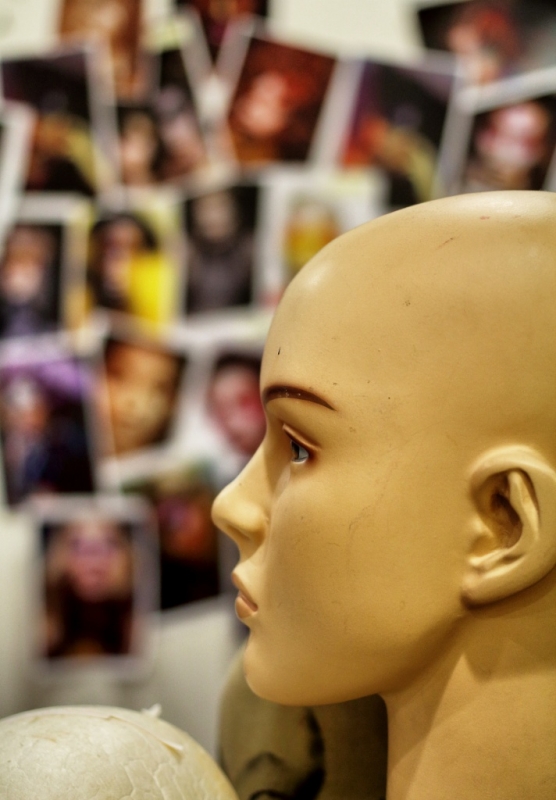 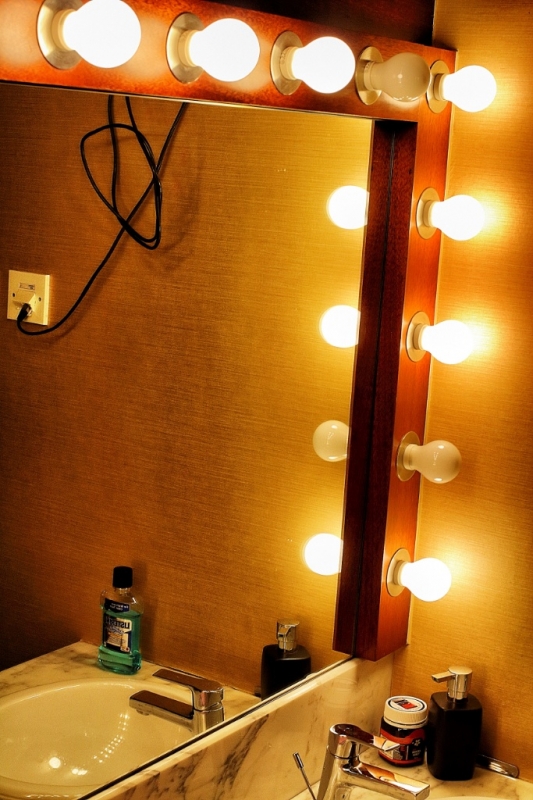 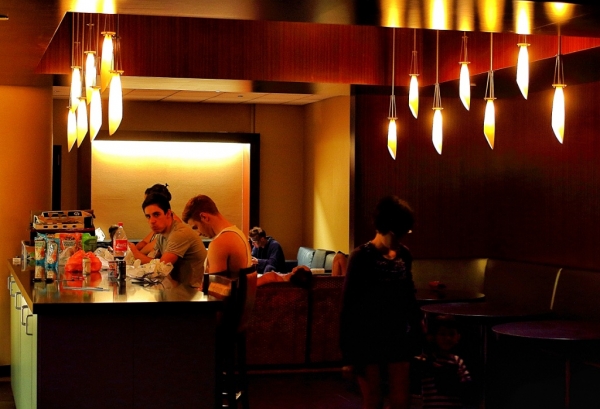 At the performers lounge, where they take their well-earned rest, have snacks and chat in between showtimes. 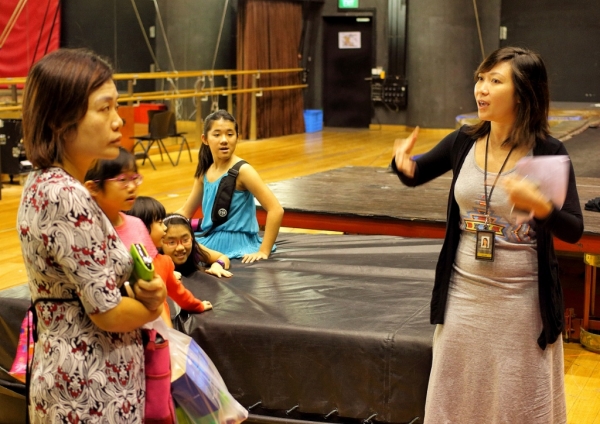 Wendy showing us the performers acrobatics training hall. Loads of cushioning there… 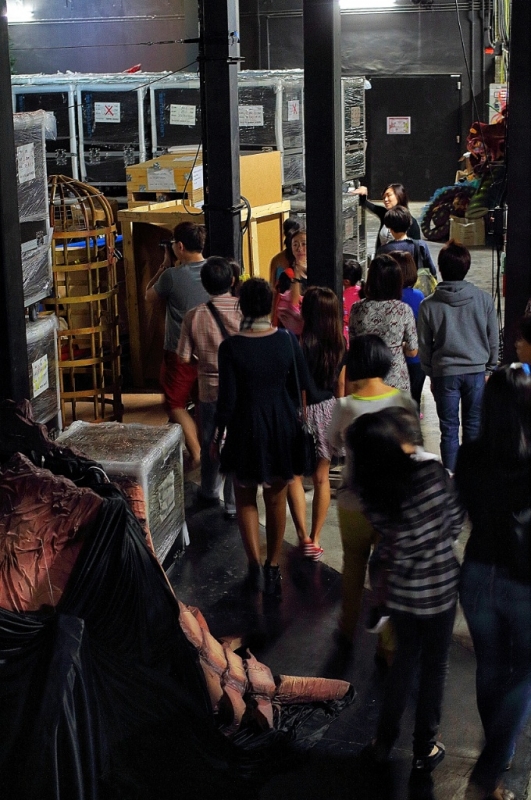 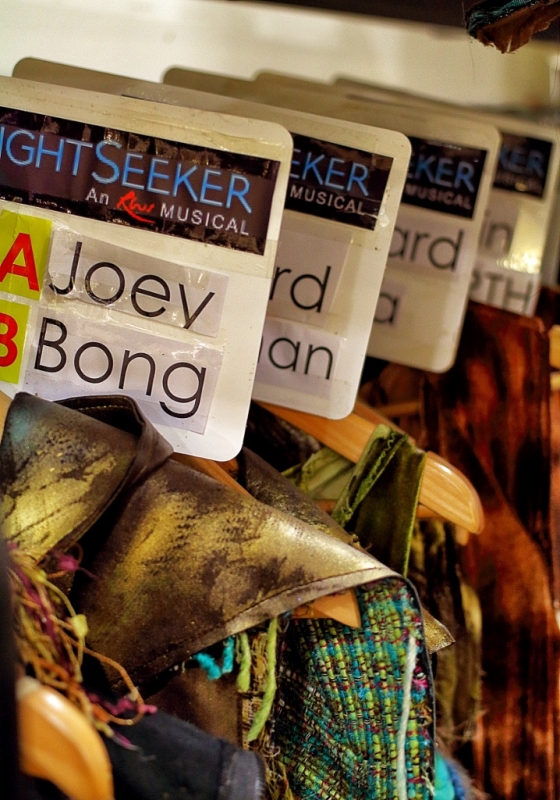 The performers’ costumes all tagged and ready for the musical. You might like to know that all costumes are laundered after each night performance. Hygiene is key. 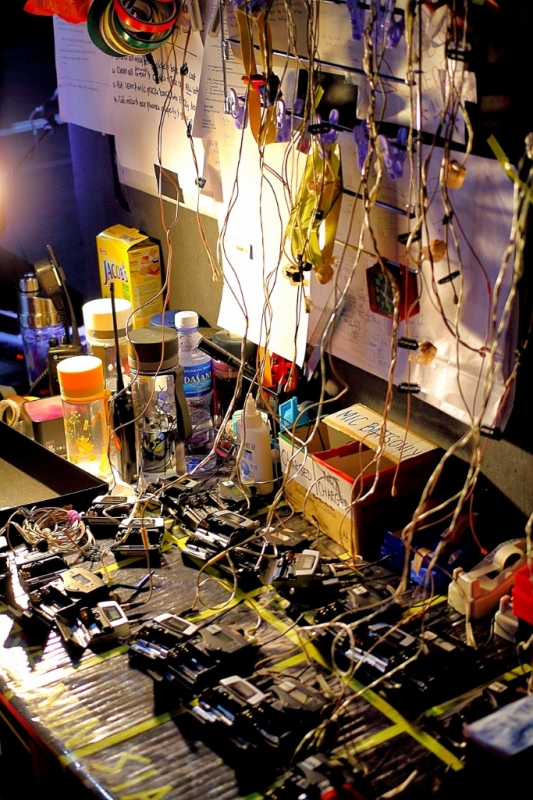 They called this section “Radio City”. Really it is just a section where all the miniature body microphones are maintained and serviced. It is secured to the performers body and hardly detectable to audience. And yes, the songs you hear during the musical are ‘Live” and not lip-synced. 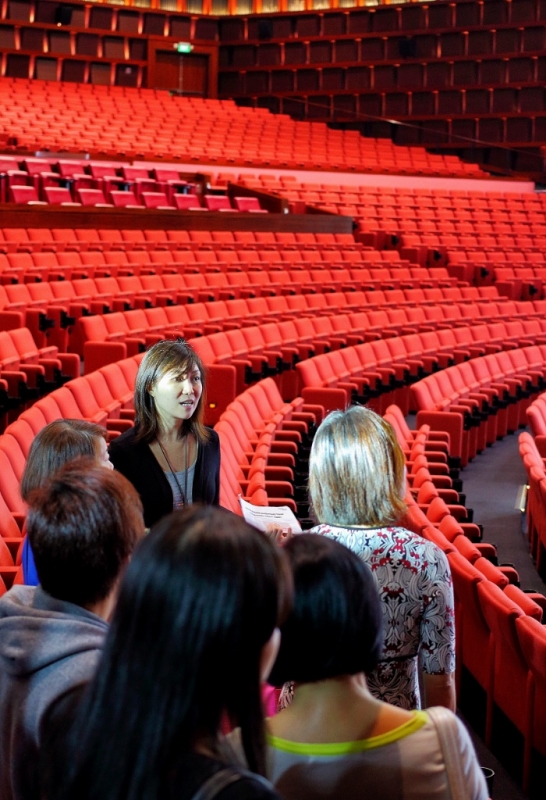 End of our backstage tour

The musical will run it’s final show on the March 23, 2014. Showtimes are Mon, Tues, Thurs and Fri, 8pm; Sat and Sun, 3pm and 8pm and tickets can be booked via sistic. For public holiday schedule, go to www.rwsentosa.com

Curious if the show as any good? Be sure to check out our Lightseeker review by Adila.