Recently launched in January 2015, Kühlbarra farms top grade Barramundi and delivers the freshest catch to your doorstep. Its fish is locally grown in the pristine ocean waters south of Singapore that ensure quality fish. Just check out our guide to the Singapore southern islands to see how clear the waters are! Or better yet, go visit the area for yourself. I promise you’ll never be satisfied with just Sentosa again.

They also have a Farm-to-Fork model that ensures freshness (see below), Kühlbarra’s main selling point. They stand for fresh, high quality fish that is extremely versatile and easy to prepare. To prove that, they called a few of us down for a cook-off using their signature Barramundi fish. This is how it went. 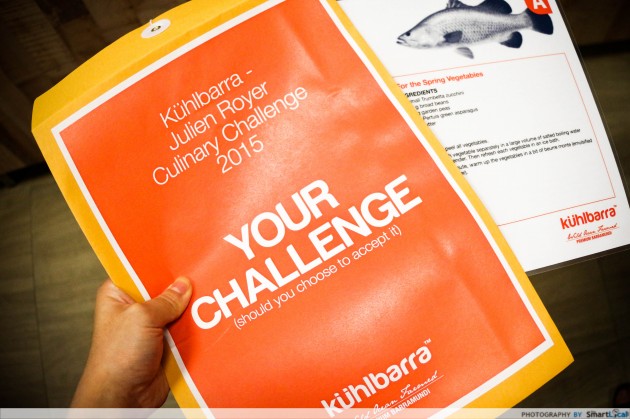 At Eureka Cooking Lab, we were given a thorough tutorial on 2 recipes using the Barramundi fish by Julien Royer, Chef de Cuisine of JAAN. I’d like to take this time to appreciate how chefs can multitask so efficiently. At one point, Chef Julien went, “Okay and back to this sauce we were heating earlier on…” and I was completely lost. When did we start heating sauce?

Denying my incompetence, I looked over at the other contestants seeking to identify the same confusion in their faces, but nope. I was alone on this. When I looked back at Chef Julien, he was already working on some vegetables and I had missed the entire bit about sauce. Despite my confusion, I continued paying attention to his instructions as diligently as I could, and before I knew it, we were being whisked away to our stations. At this point, all I was aware of was that Barramundi could be pan fried, cooked in the oven, or smoked, among various other preparation methods. That, and the Barramundi was the easiest thing to prepare in the entire dish – even the sauce was more complex. 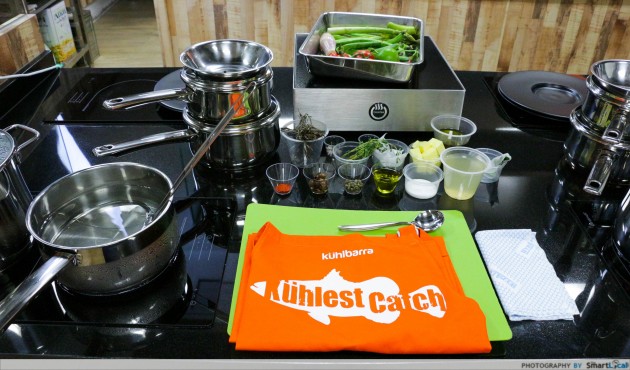 At the station, we donned our aprons and got to work. Honestly, the thing that I remember most fondly about this is how sharp the knives were. Never have I sliced and diced and chopped vegetables so efficiently.

Aaaand that’s all I did. Because there were time constraints, the chef walked around and did most of the work while the rest of us peeled tomatoes and chopped olives and *gasp* prepared the sauce. So, in the end, the ultimate challenge for us was to present the dish on a plate. 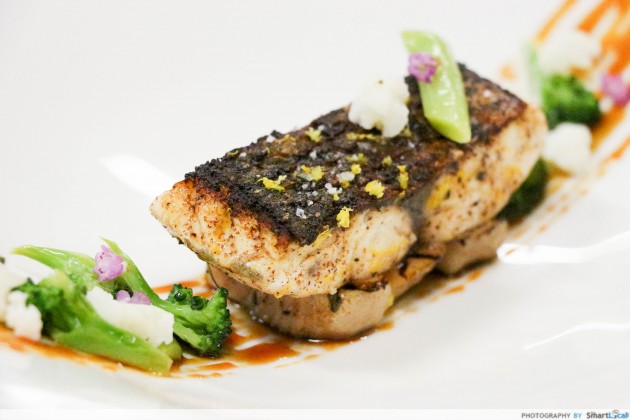 Hey, it’s harder than it sounds okay? There was this one part where we had to sprinkle some round olive-oil-gel-capsule-things over the dish and I accidentally poured in way too much. The girl beside me said, “You never know, that could make all the difference, considering all our dishes probably taste the same.”

After the first round of judging, two contestants were disqualified for having dishes that were too oily, but I was still in the running. And after the taste test, it turns out the girl was right – olive-oil-gel-capsule-things FTW! My dish was the winner! 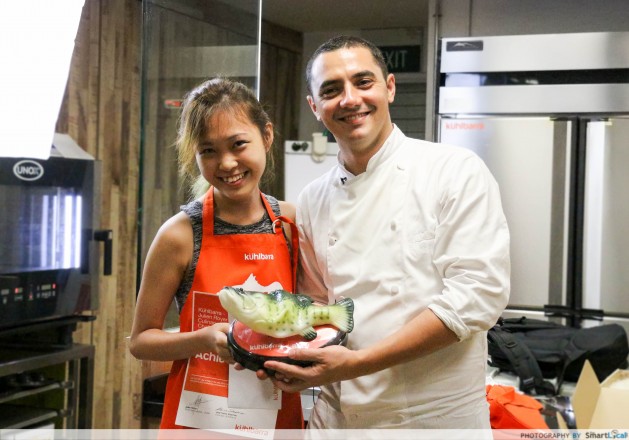 Not much to be proud of since I only contributed minimally, but I was still awarded Barry the singing fish (which has become an honorary member of my family), a certificate of achievement, and a Kühlbarra voucher! We were all also given pretty orange casseroles to bring home.

Afterwards, we all sat down and ate the fish. I haven’t been a fan of fish since I had a fish bone stuck in my throat one time and had to go to A&E to get it removed (embarrassing story – don’t ask), and am quite averse to fish, but since the Barramundi is filleted, that wasn’t a problem at all. Plus, it tasted divine. I’m not sure if it’s because I actually put some effort into the preparation of the fish, but ooooh girl the fish was so good. A BIG thank you to Kühlbarra for being such kind and generous hosts that day! 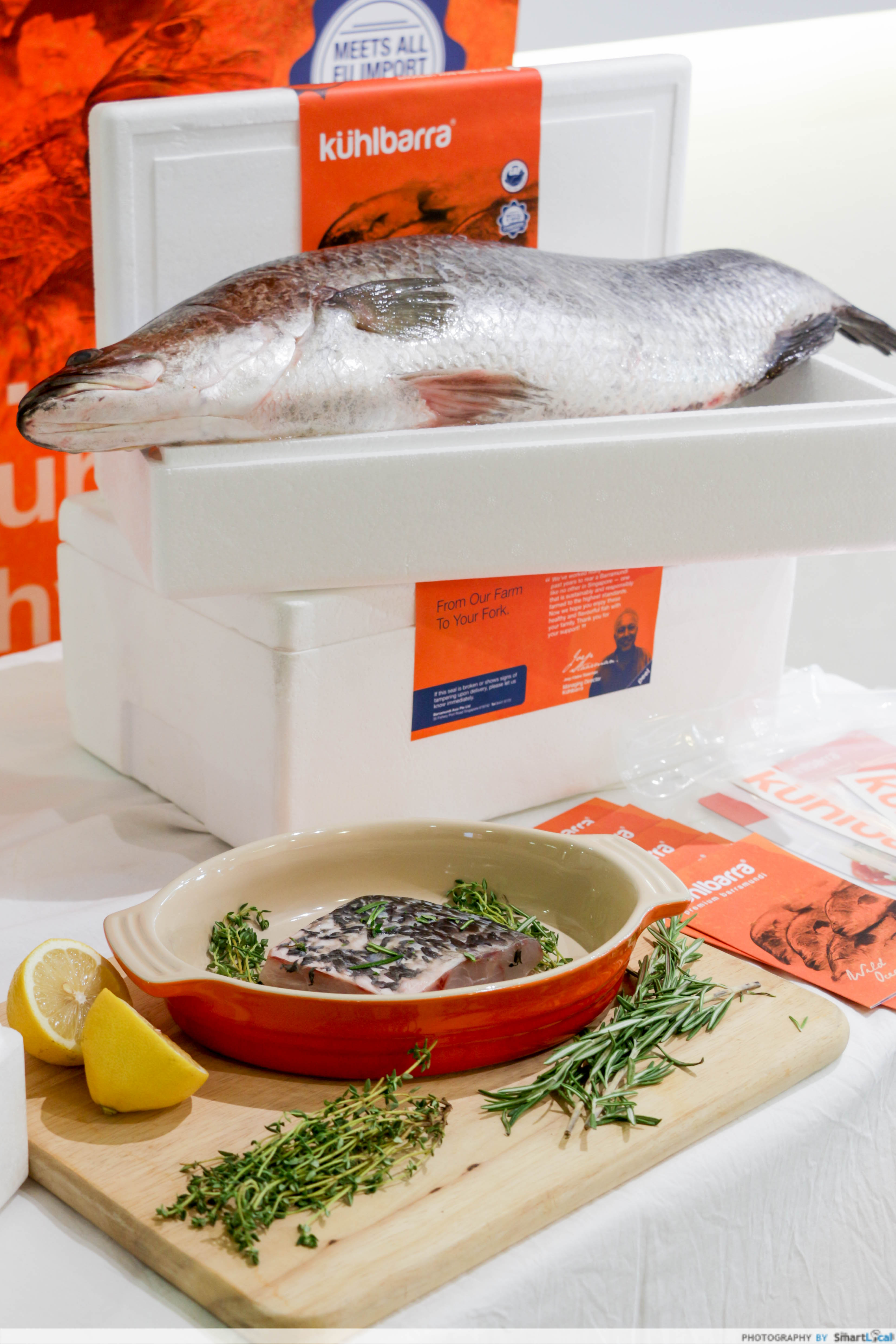 Aside from the ideal location of the Kühlbarra fish farm that ensures their fish grow superbly, they have a Farm-to-Fork model that ensures that the freshest fish is delivered to your doorstep. The fish at the farm are harvested to order, after which they are immediately submerged in ice. Within hours, they are filleted in a cold room and vacuum-packed to maintain maximum freshness and flavour. After that, the fillets are packed on fresh ice in insulated containers before being delivered to your doorstep.

The kühl-est thing about this is that this entire process keeps the fish even fresher than if you were to buy the fish at a market and transport it home yourself, because you have broken the cold chain and the fish would have started to thaw. They don’t have a physical store, so you can’t really get there. All fish is delivered directly from their facility. To order, simply vist www.kuhlbarra.com. They deliver free to your doorstep with every order above $50.

Do check out their website for more special offers and information!