Us wanderlusters have always longed for a Leaning Tower of Pisa to hoist up or a certain Eiffel Tower to hold between our fingers. Whether you’re a jetsetter or an ordinary civilian, you’ve probably been guilty of the oldest photography trick in the book – the #ForcedPerspective, aka these touristy stock images: 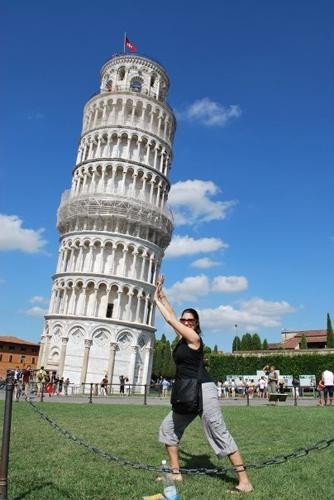 If your only idea of an unusual perspective shot is the “I’m squishing your head” or the “drinking from the Merlion”, it’s time to one-up that substandard feed. And we’ve got your back. Or rather, your photographic sixth sense.

Ready your photo album space, because we’ve armed ourselves with Huawei’s all new P10 camera phone to bring you 9 image manipulations taken right here in Singapore. Behold, your transformation from floppy flatlay-er to image otaku. You’ve gotten some of that good ol’ siew mai from that hawker stall near campus, and now it’s photo sesh time! Don’t worry, we’ll gao dim sum of those shots for you.

Instead of the usual bao in hand shot, mix it up a little and go for NTU’s iconic The Hive. This eye-catching building may be named after the conical, sandy texture of beehives, but us Singaporeans listen to our stomachs most. They’re our trusty dim sum baskets.

Tip: Be prepared to squat for this low angle shot. Or get a really tall friend. Snap your shot from: Path on the opposite side of The Hive. It should lead you towards Koufu.
Things you’ll need: Chopsticks and the siew mai from Koufu. From housing the MBS Man to hosting Adele’s Hello music video to appearing on the Hollywood big screen, MBS has gotten its fair share of fame. But starring in the next big toothpaste commercial? Now that’s something to look out for.

Be sure to turn on the P10’s aperture mode to manually focus on the MBS building in the background, giving you a sweet depth feel worthy of a photography genius.

Snap your shot from: Esplanade Roof Terrace
Things you’ll need: Toothbrush and toothpaste to clean up your photog – and faking – skills. 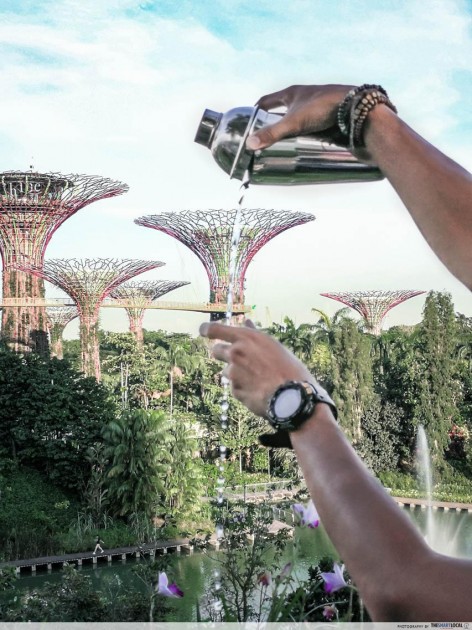 The curious shape and magenta trimmings of the Supertrees may seem like something out of a James Cameron movie, but we say it fits a James Bond movie better. Shaken not stirred, anyone?

Be sure to snap your shots from Marina Barrage – there’s no way you can fit a 50-metre tall Vesper Martini in your shot otherwise. The P10’s Hybrid Zoom feature, which allowed us to zoom without compromising on the sharpness of the shot, really helped us on this one.

Snap your shot from: Linkbridge from Marina Bay Sands Hotel to Gardens by the Bay
Things you’ll need: Cocktail mixer and pouring skills matching up to your Teh Tarik man. 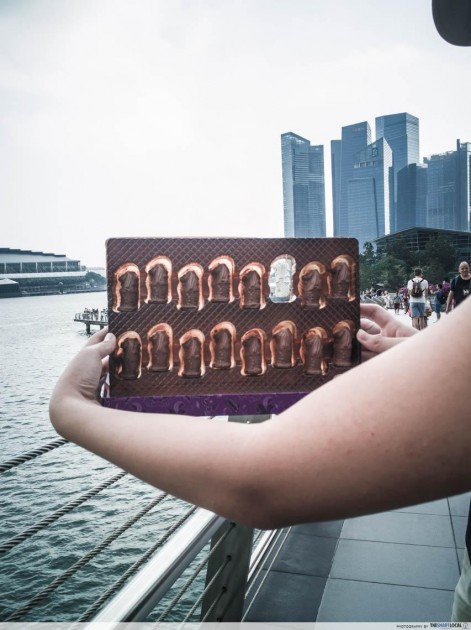 We’ve all seen these Merlion-shaped chocolates sold in 3 for $10 gift shops. It’s time to disobey your ma’s “don’t play with your food” advice, because these make the best prop for a Merlion shot bound to stand out from the rest.

Just be warned: it can get windy. Modern day conveniences may mean we never boil water over an open flame again. But take a trip down memory lane for a second. A giant water boiler right in the heart of Singapore – now that’s a real discovery.

The next time you’re dragged by your pantang grandparents to the Fountain of Wealth, wait for the nightly light show. Stand at Suntec City’s roundabout, and you’ll get a great side view of the dancing “blue flame”.

To really up the profesh level here, turn on the P10’s Silky Water mode for fuss free long exposure shots. The Silky Water comes with pre-prepared settings that does all the complicated adjustments for you. All you gotta do is sit back and watch the magic happen. 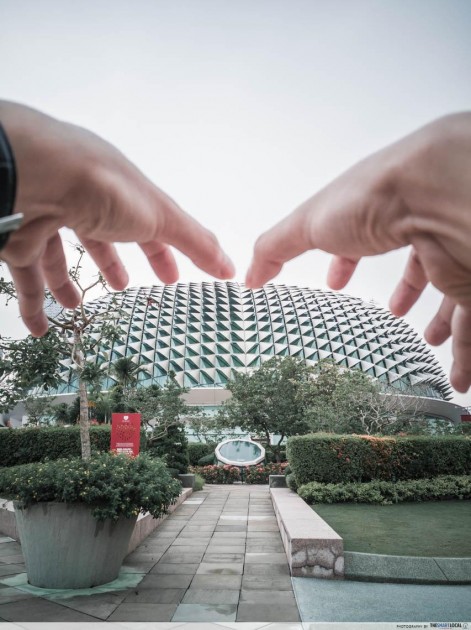 No guesses on which building to use for this. In the realm of Singapore-themed forced perspectives, you know a durian-shaped building is an instant must-use.

It took a couple of tries for us to get the exact hand placings, so trust us when we say that standing closer to the Esplanade actually gets you a more believable “durian”. Just endure the judging stares of tourists as you grab thin air. All for the ‘gram, fam.

Snap your shot from: Esplanade Roof Terrace
Things you’ll need: A helpful extra pair of hands to snap the shot, and thick skin to withstand the judging stares of tourists. Parkview Square, with its dark brooding facade and majestic height, has been hailed Singapore’s very own Gotham City. Time to draw the spotlight away from MBS – you’ll find Ben Affleck here in no time.

Snap your shot from: Steps leading up to Parkview Square.
Things you’ll need: A Batman figurine and some childhood imagination. 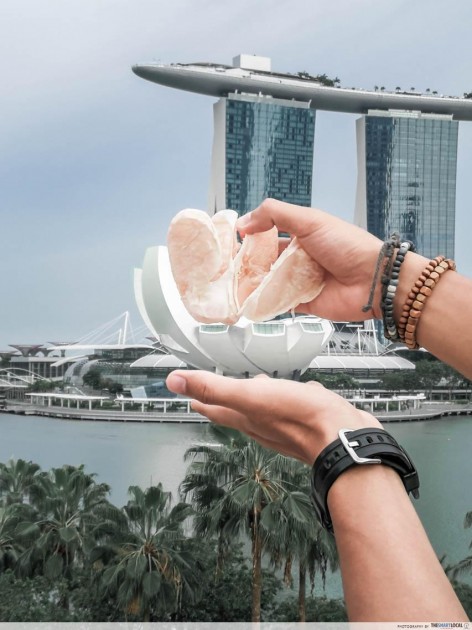 A certain exhibition in the ArtScience Museum – *cough* FutureWorld – may be the darling of our Instagram feeds, but take a moment to appreciate its facade. Lotus flower? Baseball glove? Here’s one you probably didn’t think of: pomelo.

Tip: If you run into the same chao da-level sun as us, turn on the P10’s raw mode and manually adjust the exposure value to a lower value. We used EV 1.0 for this shot, which helped temper the sun’s glare. No overexposed photos for us, tyvm.

Snap your shot from: Esplanade Roof Terrace
Things you’ll need: A real pomelo. And lots of stamina to trudge through the sun. This shot is all you need to make #saltbae proud and your followers salty. 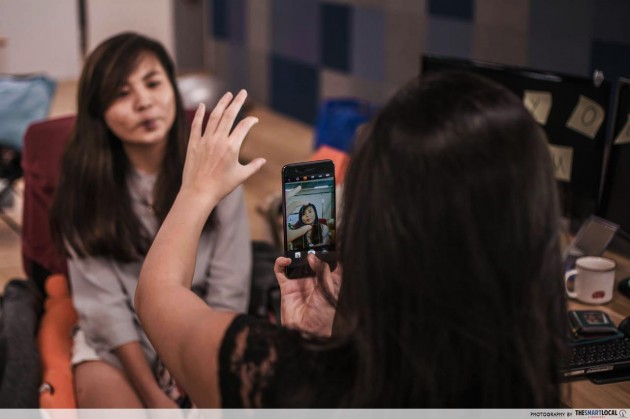 If all else fails, there’s always the classic “I’m squishing your head” shot.

We may be used to seeing the same Singaporean landmarks time and again, but this is a fact: we rarely stop to truly appreciate them.

The next time you’re out on one of your photospot hunts, don’t just stop at what’s on the surface. Use a little creativity, don a different pair of glasses, and you’ll be sure to uncover different angles and perspectives that’ll transform that laupok HDB flat into something else entirely.

Be ready to whip your camera out at any time An instaworthy setting and a keen photographic eye – you’ve aced those with this cheat sheet. What you’re still missing is a camera with the right specs. But real talk: lugging a DSLR along Singapore in addition to the props you need for a shoot like this? Between compactness and photo pro-ness, you shouldn’t have to choose. 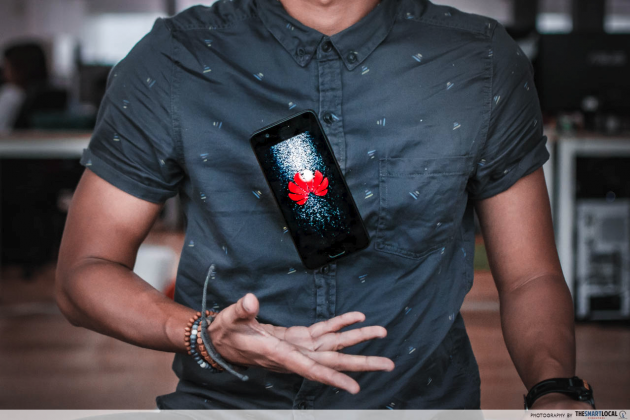 We’ll let you in on our last check off our list. All photos were taken with Huawei’s latest P10. With its Leica lenses on the front and rear, the P10 has given us photo features equivalent to lugging a real profesh camera around, sans the fuss. The phone is fitted with Leica’s Dual Camera 2.0 Summarit-H lenses with in-built Optical Image Stabilisation, making your photos less blurry compared to photos from other phones. The P10 Plus is equipped with the Leica Dual-Camera 2.0 Pro Edition Summilux-H lens for those craving an ever pro-er photo game.

With Huawei’s P10, you can say holla to effortless profesh shots in no time.

Find out more about the Huawei P10 here! 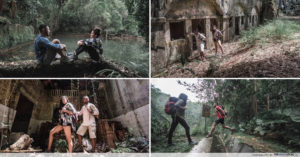