Gearing up for the future with Infocomm 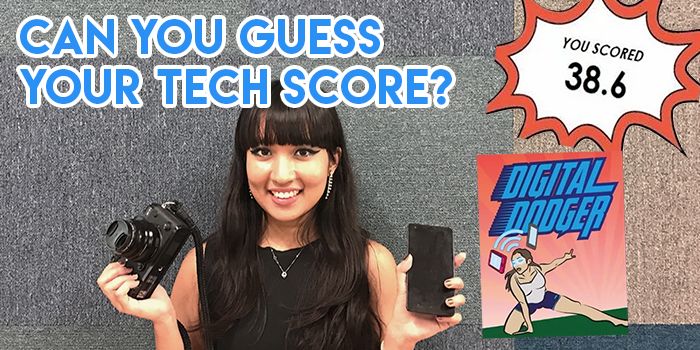 It’s the year 2020. As you’re scuttling to work, a man stops you in your tracks. “All the jobs are gone” he groans. All the jobs are…gone? As you brush aside your little nightmare, you realise that this isn’t a scene from doomsday – but a future that’s more likely than we imagine.

That doesn’t mean we can’t start prepping ourselves for the future though. The World Economic Forum predicts close to 5 million jobs being lost by 2020 due to the rapid advancement of technology – which would affect Singaporeans too. Are we future-ready?

This quiz helps us find out:

Step one: The Ready for the Future quiz 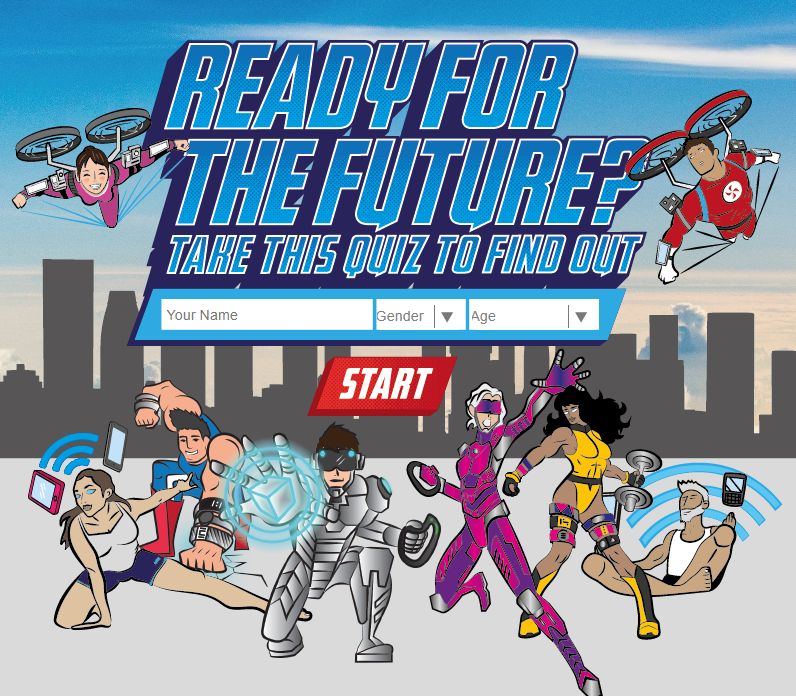 The Ready for the Future quiz aims to create awareness to members of the public of initiatives under Infocomm Media 2025 to help them become future ready.

All participants need to do is fill up a quick questionnaire that’ll gauge how well-versed one is with the world of tech.

Results come in the form of 4 levels of “tech superheroes”, and provides participants with different options of courses they can sign up for to learn new skills that’ll help them level-up in the workforce.

I enlisted 3 unsuspecting volunteers to participate in the quiz. Before taking the quiz, I asked them about their thoughts on technology, and how much infocomm media technology has played a part in their daily routine: 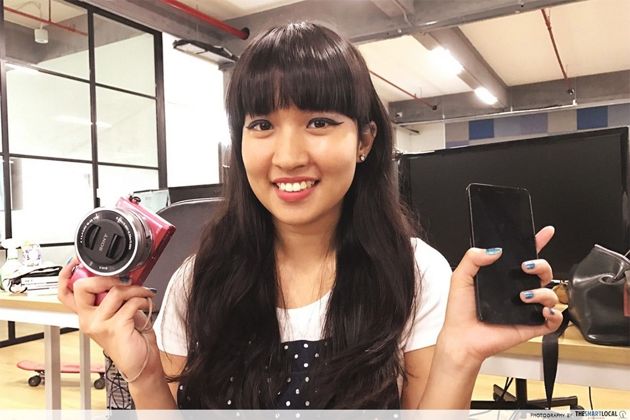 Though Rachel didn’t know much about the field, she shared her thoughts on how seamless life seemed with the influence of technology.

“I don’t know what Infocomm even is.” said Rachel. We then explained to her that Infocomm included all sorts of media and tech she already had knowledge of. “I didn’t know there was a term for it. Well if anything, smartphones have helped me stay connected with friends while studying overseas more easily. I don’t keep up to date with the latest gadgets – but I do enjoy playing around with my camera if that counts.”

Wen Chuan, 28 – Familiar with infocomm, is also his mum’s tech-guru

“Isn’t it everywhere?” said Chuan, speaking of Infocomm as if it were an omnipresent being. But there was some truth to his statement – after all, it’s tough to be apart from technology when we’re so heavily dependent on it.

“I don’t think I know much about it, apart from what I use everyday. But my mum is always asking me about how to use the computer – whether I know or not.”

And then there’s my mum, a woman who claimed that we’d never find her on Facebook. Fast forward 5 years and many Facebook statuses later, she can’t deny how addictive social media platforms can be.

“It makes life easier for me. I can keep in touch with my sister who lives 22 hours away through the messenger. I have some trouble editing videos and images though – how ah?”

Archetype A: The Digital Dodger

My first participant Rachel fit straight into Archetype A: the Digital Dodger. 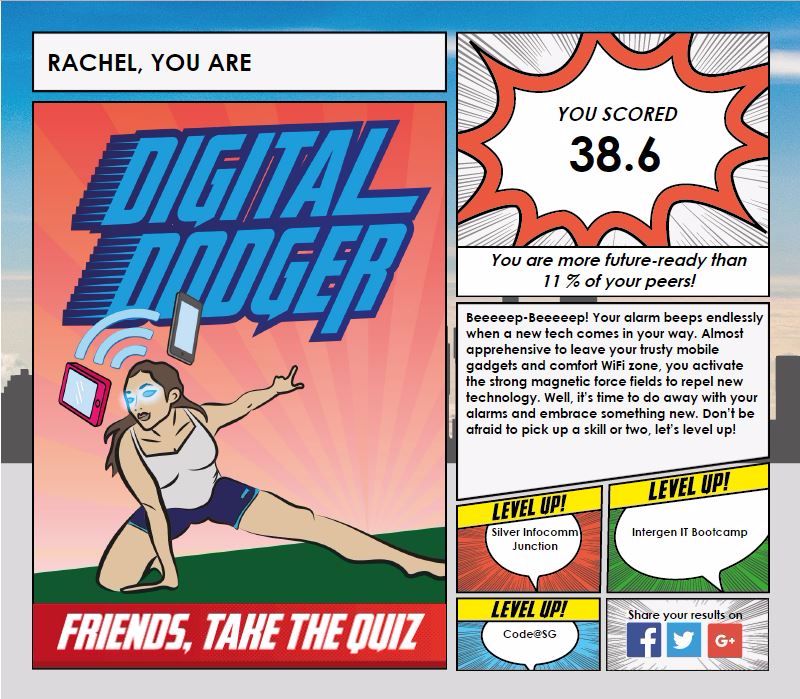 You can share your results on social media too

“I’m quite resistant to change and don’t see the need for newfangled tech stuff. But I guess it wouldn’t hurt to learn a new skill or two – I can see why it’ll be useful for the future.” said Rachel.

Archetype B: The Super Trouper

Next up was surprisingly Sue, who clinched herself the title of a Super Trouper. As I’d expected her to not get a score higher than either Rachel or Chuan, I was curious to see her answers! 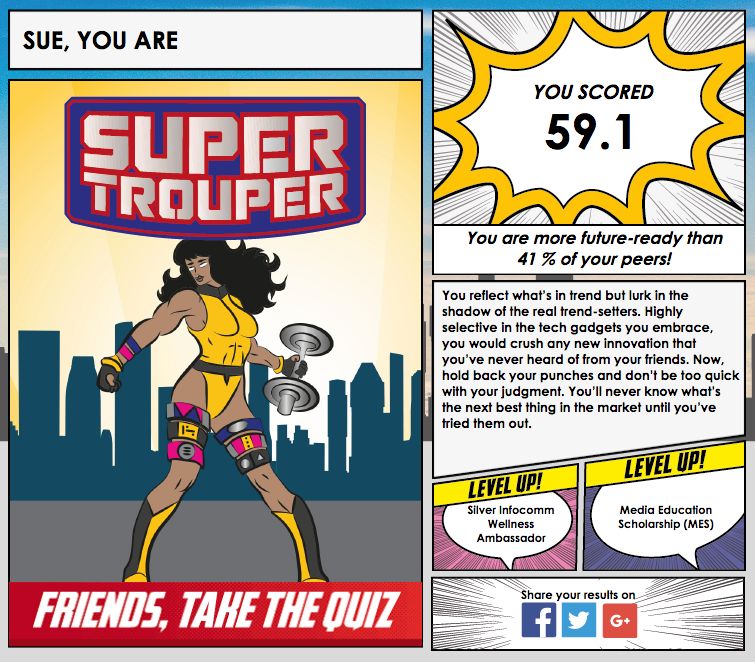 “I enjoy using new pieces of technology, but I don’t enjoy the challenges that come along with it.” She went on to explain that technology advances in such a fast rate, something she might have just gotten the hang of can become obsolete in a short span of time.

She also had some thoughts when asked if age mattered. “I always have to catch up and learn new things.” Being the boss of her own company, adapting to new tech has become more of a necessity over the years. “It doesn’t matter if I’m used to traditional methods – the people I work with are not. So it’s good that these courses are available for us to take.”

Coming up top was Wen Chuan, who scored 64.2, earning himself the role of a Tech Transformer.

“I don’t always actively seek out the latest information on new tech trends – but I try to be aware of the ones that are most pervasive. Sometimes, the knowledge is sought out of necessity.”

With Infocomm having such a big influence in society today, it’s important to stay up to date with the latest trends so as to not “fall behind”. He also agreed that the initiatives under the Infocomm Media 2025 are a great way for the public to better equip themselves with future skills. 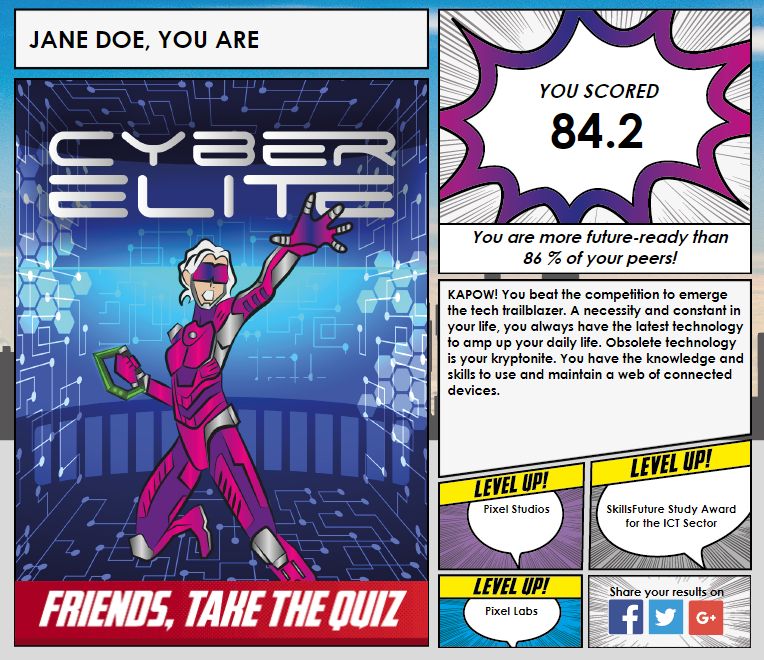 And finally, the elusive Cyber Elite – a rank none of us managed to achieve. Turns out, there are still options to level up even if you’re a tech whizz, such as: 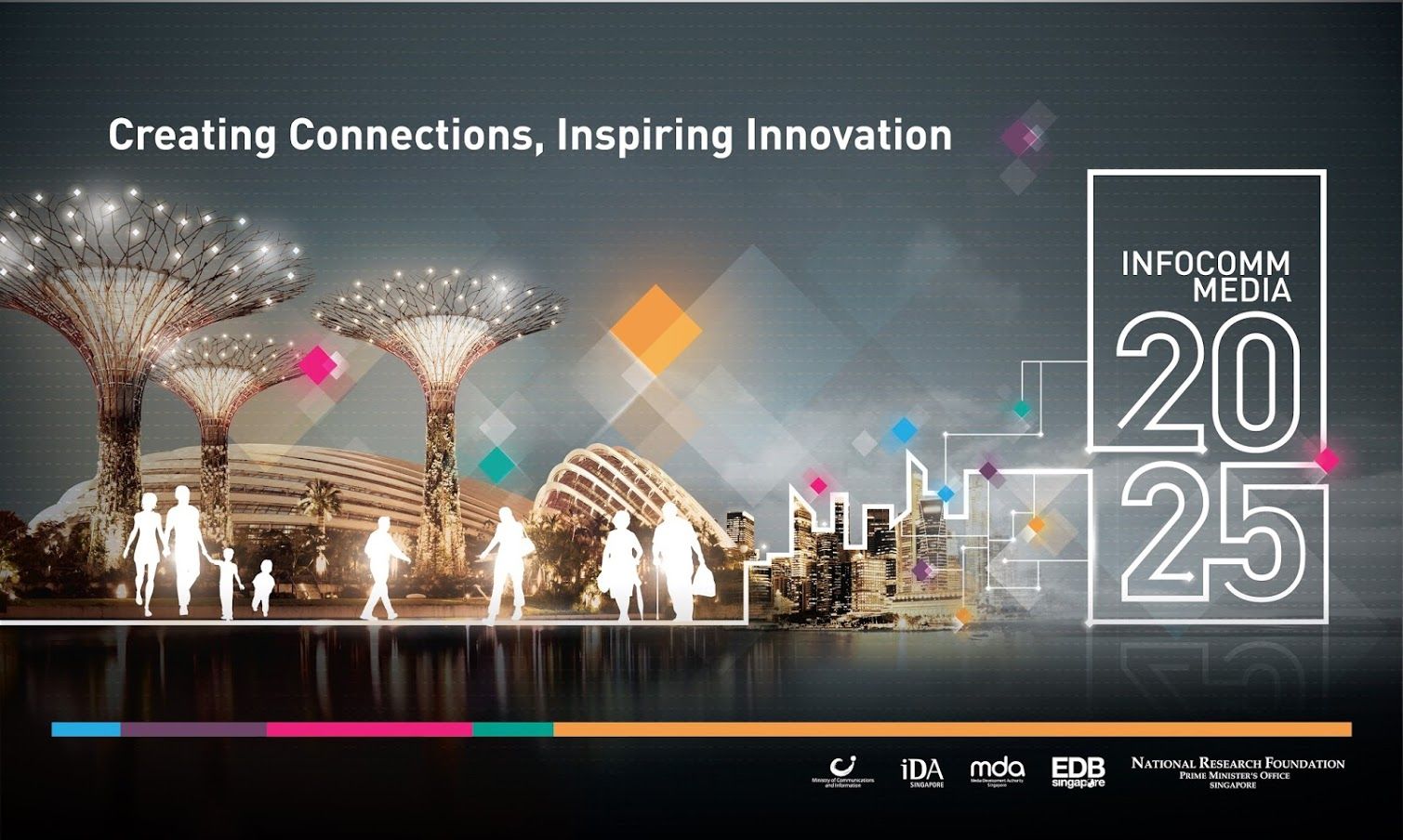 Okay, so maybe the idea of sustaining a job isn’t as apocalyptic as it seems – and it never has to be. Infocomm Media 2025 is a 10-year plan that sets out to create a globally competitive environment that creates an economic and social transformation for Singaporeans.

According to IMDA’s Annual Manpower Survey 2015, about 172,000 ICT professionals have been hired across all industries, with half of this number being employed in various sectors across the economy, such as finance and healthcare – and there are still roughly 20,000 vacancies to fill.

Started in August 2015, the plan also aims to make people more aware of government initiatives that’ll help us get future-ready – which’ll make securing jobs an easier process too. So whether you’re done dodging the latest trends or challenging yourself as an honourable cyber elite, ICM 2025 will get you on the right tech-track in no time.