Just as you thought 7th month was over, spooky szn is coming around. If you haven’t had enough of ghost stories, that means it’s time for an annual trip to Universal Studios Singapore (USS) for the 10th edition of Halloween Horror Nights (HHN10). It’s returning from 30th September to 5th November 2022 with 19 event nights.

Far more elaborate than previous renditions, the stars of HHN10 are the haunted houses and scare zones, bringing back crowd favourite characters such as Miss Pon, mutated zombies, and demented clowns. There’s also a laser-tag challenge, performances, and a behind-the-scenes tour. Read on to find out what you can expect this year. 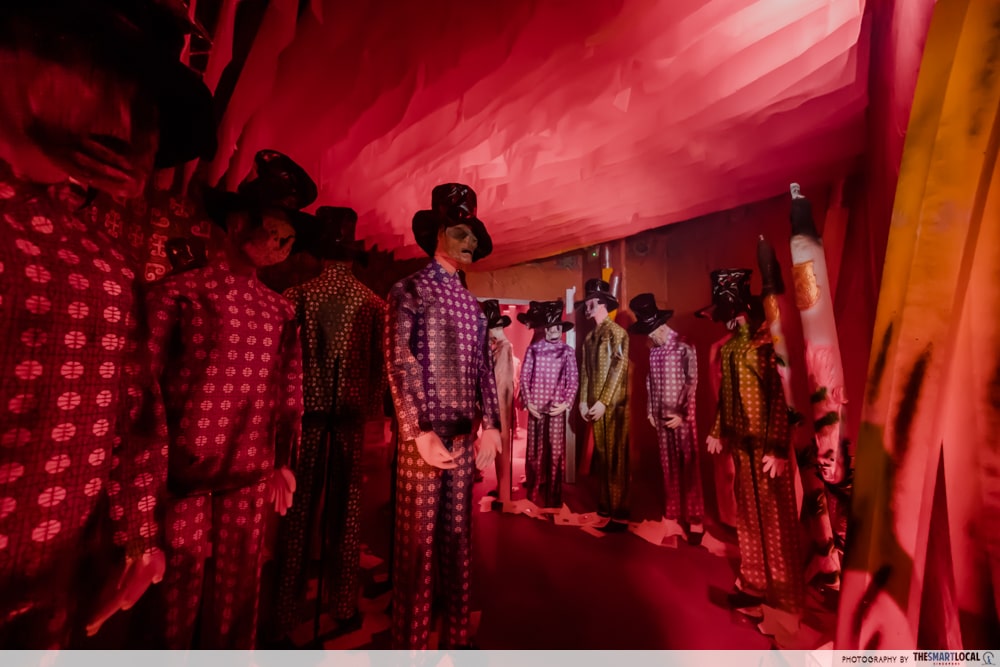 Calling all true fans of HHN. Spot all your favourite evil characters and themes from the iconic haunted houses of HHN over the years at Killustrator: The Final Chapter. As a tribute to the scariest characters, all the sets and props have been recreated with a twist to bring back those hair-raising moments, so there are plenty of easter eggs to be found. 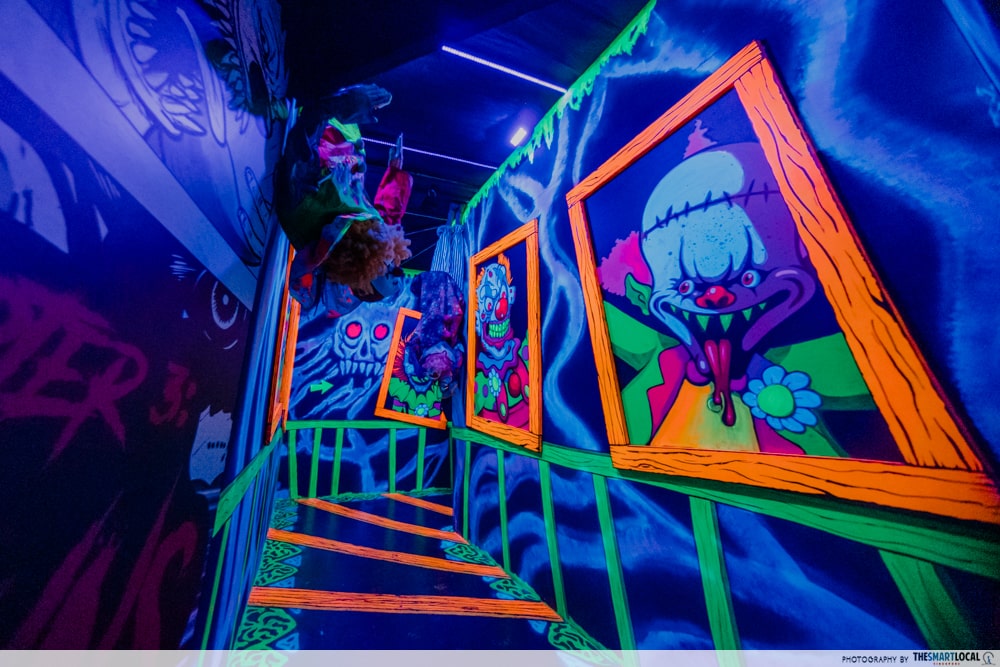 Just like you, the Killustrator is a member of the HHN fandom but his obsession with the villains of past haunted houses drives this crazed manga artist to create a really sinister haunted house. As you scream your way through the house, you’ll spot familiar themes such as the clown house from HHN9 and The MRT from HHN5, inspired by True Singapore Ghost Stories. 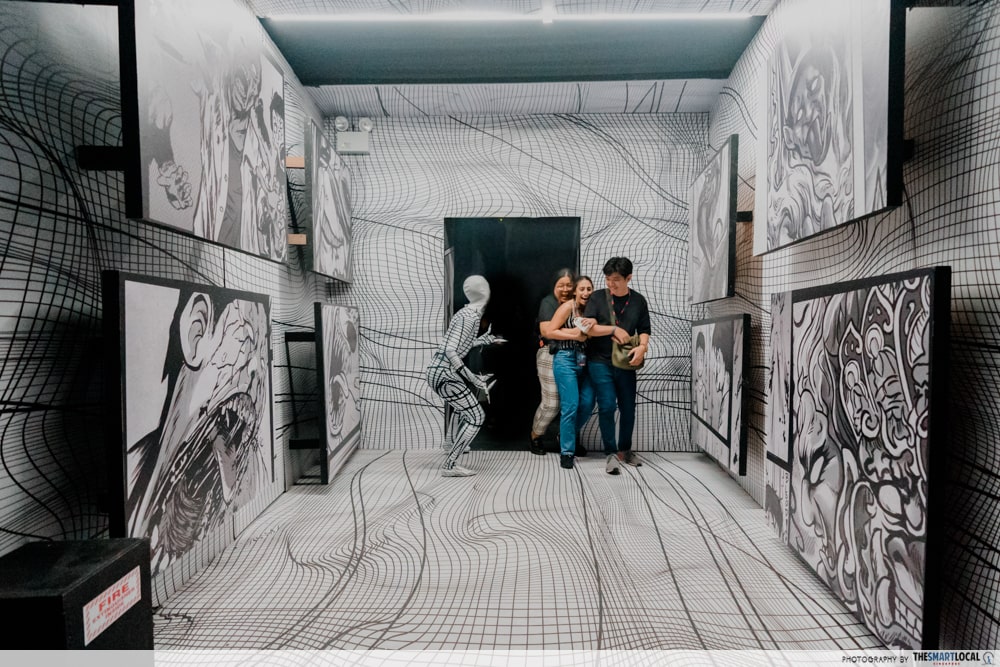 In our opinion, this is the scariest haunted house of the 3, with the actors doing a splendid job of retaining the jump scare element and coming out of nowhere. The visual effects such as hand-drawn illustrations in the monochrome room and psychedelic wallpapers are a real treat and truly enhance the scare factor. It’s like walking through a psychological thriller. 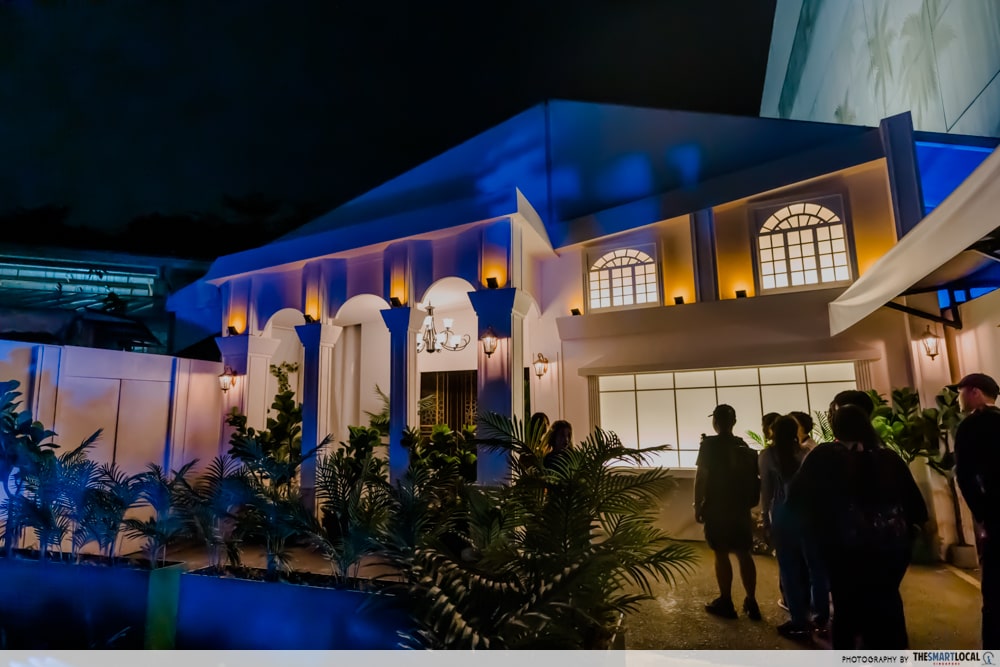 We’ve all heard of at least one horror story set in a hotel. From intruders to lurking spirits, so many things could go wrong. Check into the Hospitality of Horror for yet another horrifying story with a dark ending. Not for the faint-hearted, the haunted house has been designed with multiple blind spots, so let’s just say there will be lots of jump scares. 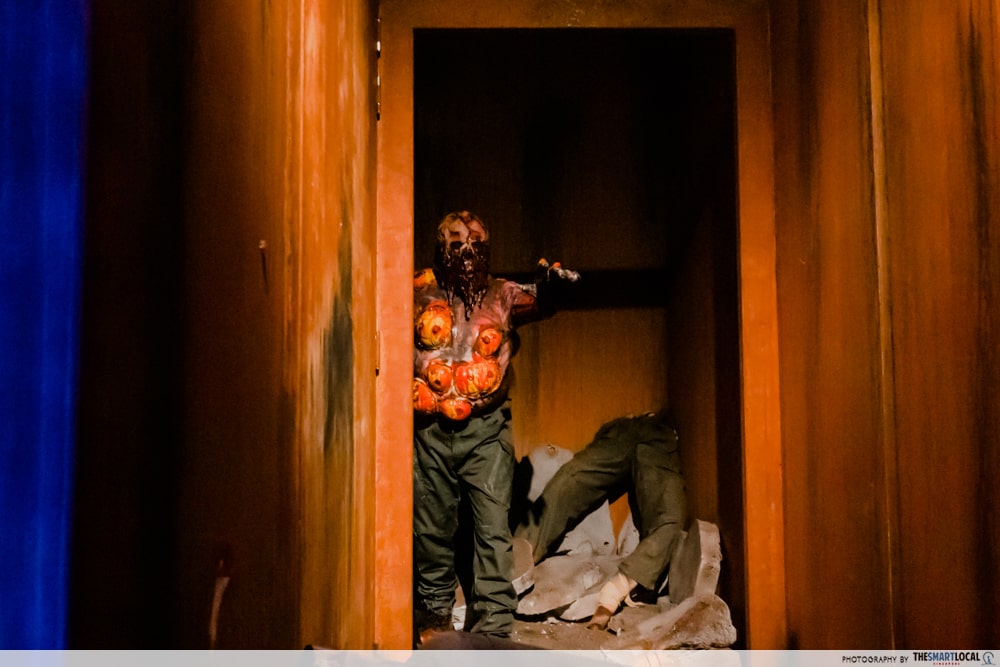 This hotel was once a grand mansion owned by a tycoon and his sorceress wife. Making use of a sweet deal, lots of guests like you are descending upon the hotel for a staycation. But the sorceress has plenty of skeletons in her closet, literally. 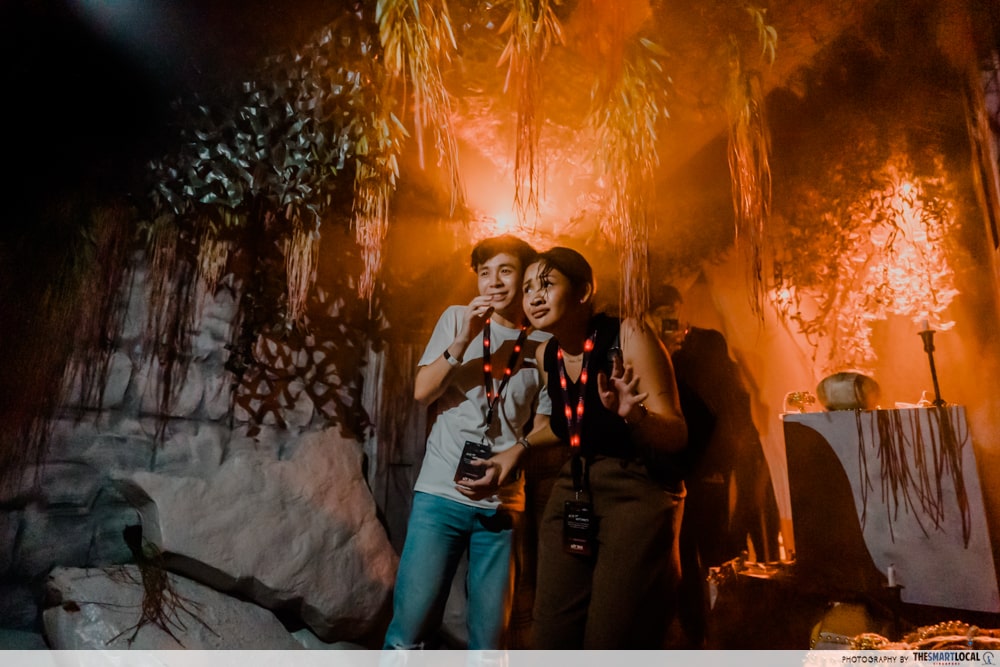 All part of the chilling experience, there’s much to admire here. The haunted house comes alive with screen printing technology used to show before and after effects such as a grand hallway suddenly strewn with bloodstains once the lights turn on and off. There are also holographic projections that make the ghosts look eerily real. 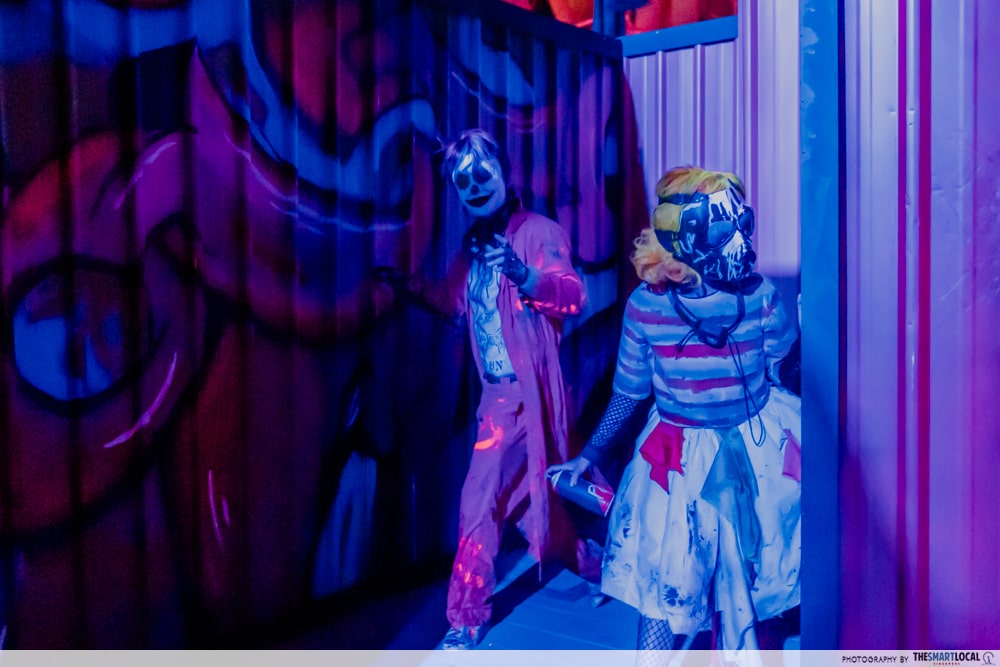 Those into sci-fi can immerse themselves into Operation: Dead Force where you join the Special Forces Against the Dead as an agent, recruited to defend the world from a zombie apocalypse. While still frightening, this haunted house is probably the least scary of them all. 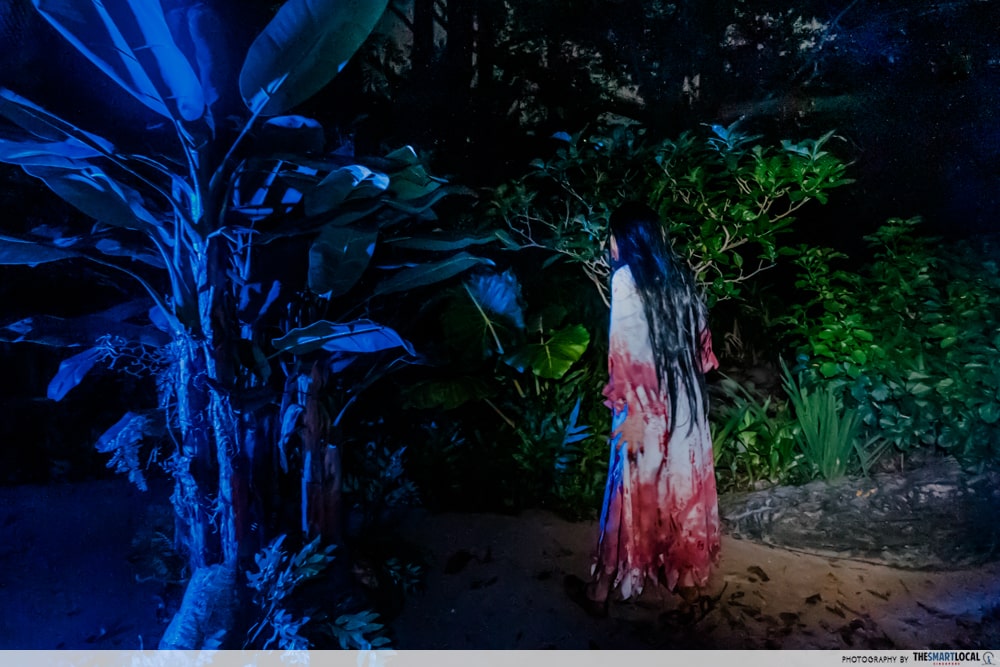 Halloween in Asia would not be the same without our beloved pontianak. Bringing our worst nightmares to life, The Hunt for Pontianak is the highlight of HHN10. Set in the jungles of the Jurassic Park zone, the experience is fully outdoors as you go on a quest to find and trap the vicious pontianak. Look out, for she might be … right behind you. 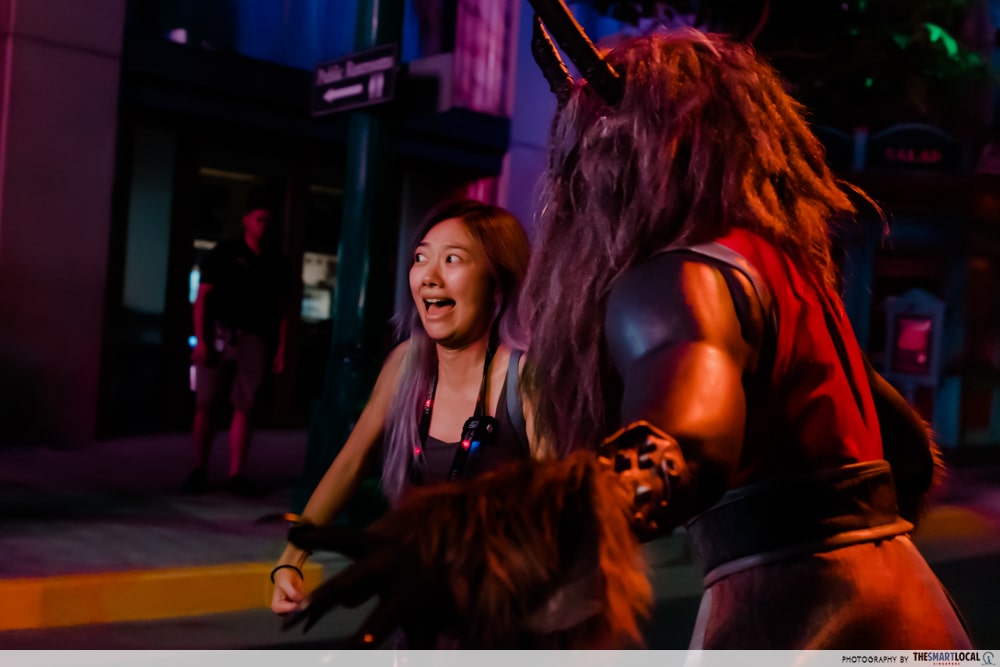 If you like being chased, The Dark Zodiac zone is where you’ll find all the zodiac characters looking for any opportunity to relentlessly follow you down the street. It’s a great zone for friends who want to sabo the scaredy-cat in their group, as well as grab photos with the actors who have put a tremendous amount of effort into their costumes and makeup.

Have a little more fun with add-on experiences at HHN10 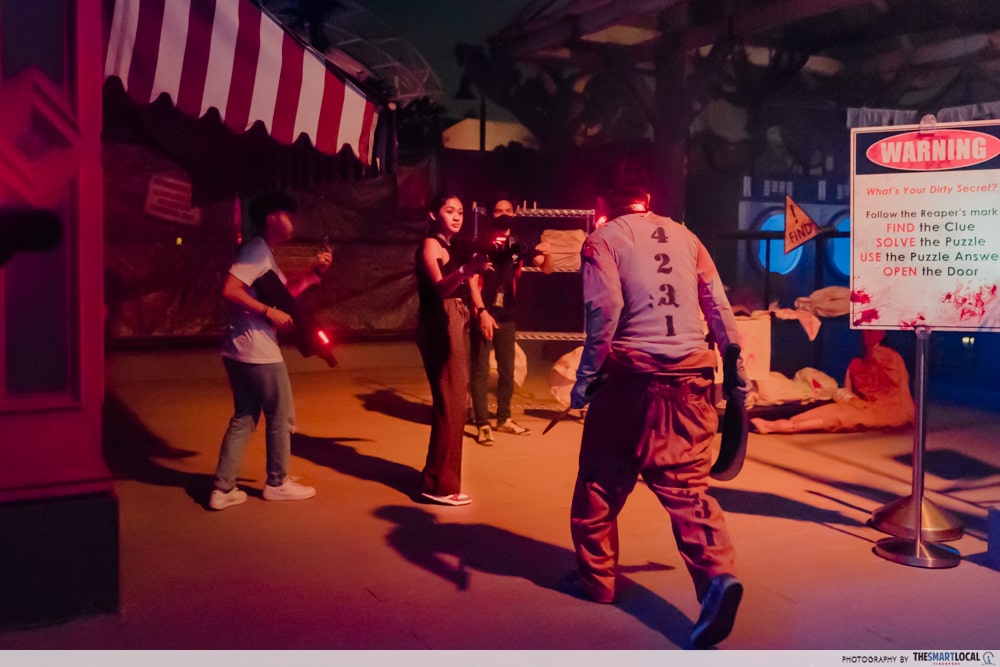 This one’s for families and groups of friends. Combining the best of both worlds, Escape the Breakout ($38/pax) is a laser tag game coupled with escape room puzzles that brings you through a 10-minute adrenaline-filled run through a prison facility. You have to solve clues to get to the next room while fending off prisoners who have broken out of their cells. 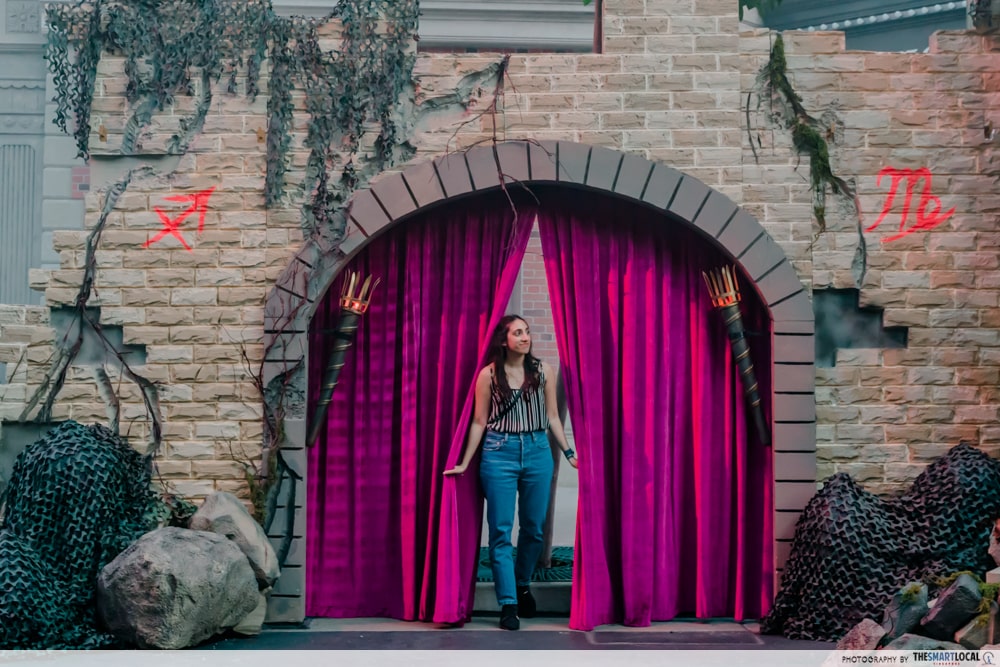 Although there is no strict age restriction for HHN10, it is recommended for ages above 13. If you have kids that aren’t too keen to explore the more terrifying activities, check out the Monsters & Manifestations ($38/pax) experience that is a little more light-hearted and falls in the category of horror comedy. 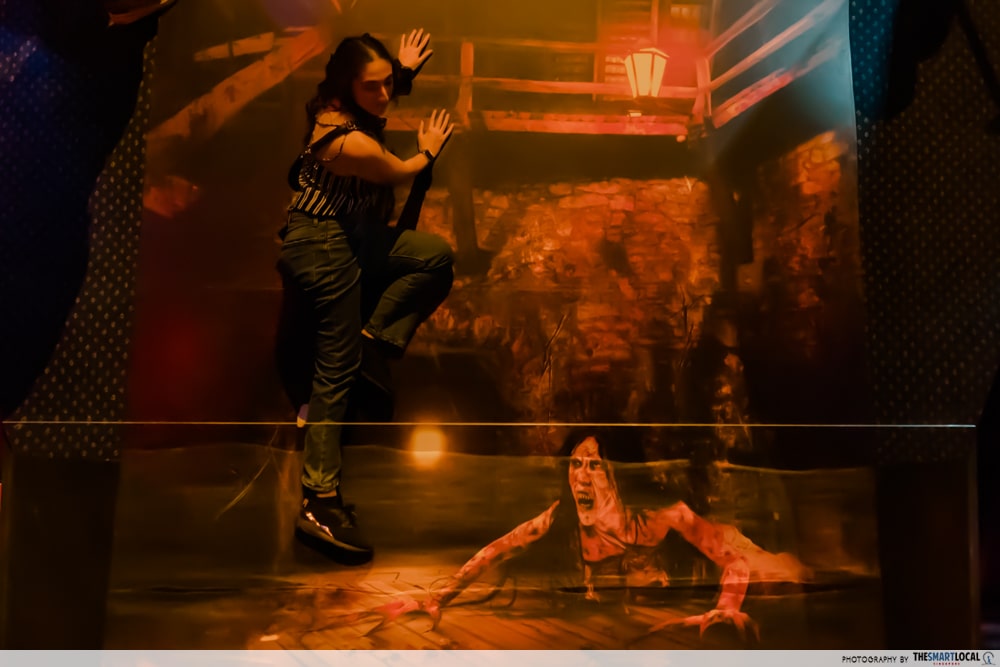 It includes a guided tour with behind-the-scenes insights into how some of the haunted houses are made as well as the inspirations behind some of the characters. There’s also a trick-eye section where you can take photos for the ‘Gram. The experience ends with a dance performance that looks straight out of Michael Jackson’s Thriller music video.

Grab VIP or rather R.I.P. tickets for a premium experience 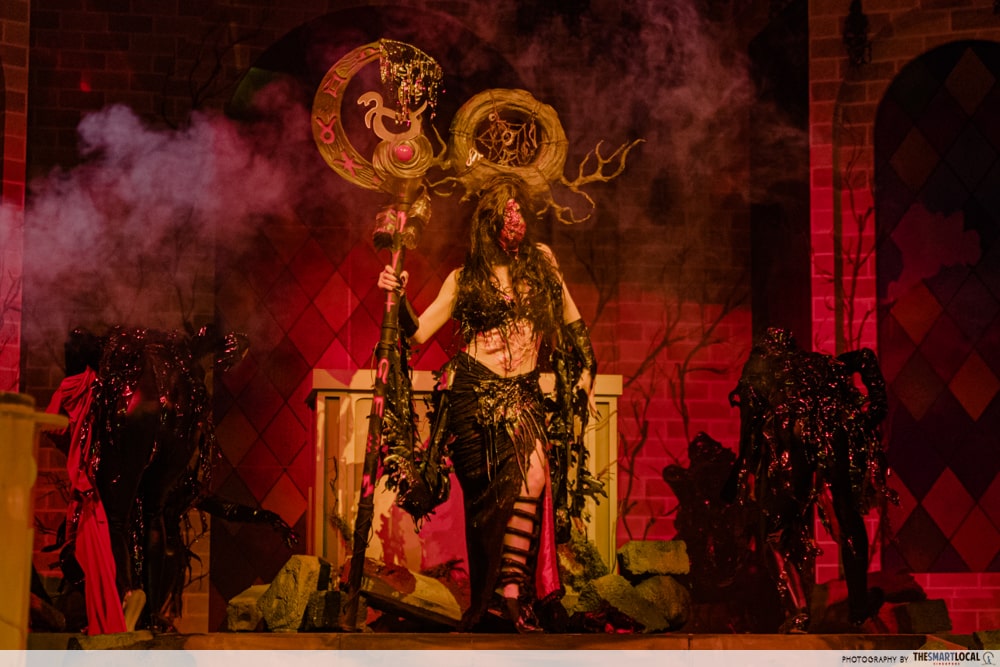 After a 3-year hiatus, HHN10 is expected to be filled with crowds this year. So, if you want to skip all the queues, consider forking out that extra bit of cash to get the R.I.P. tickets ($288/pax). It includes the HHN Express Unlimited for haunted houses and theme park rides, and the Monsters & Manifestations experience.

The ticket also includes Die-ning with the Dead, a theatrical dining experience where you’ll be served a horror-themed meal while enjoying some ghoulish entertainment. 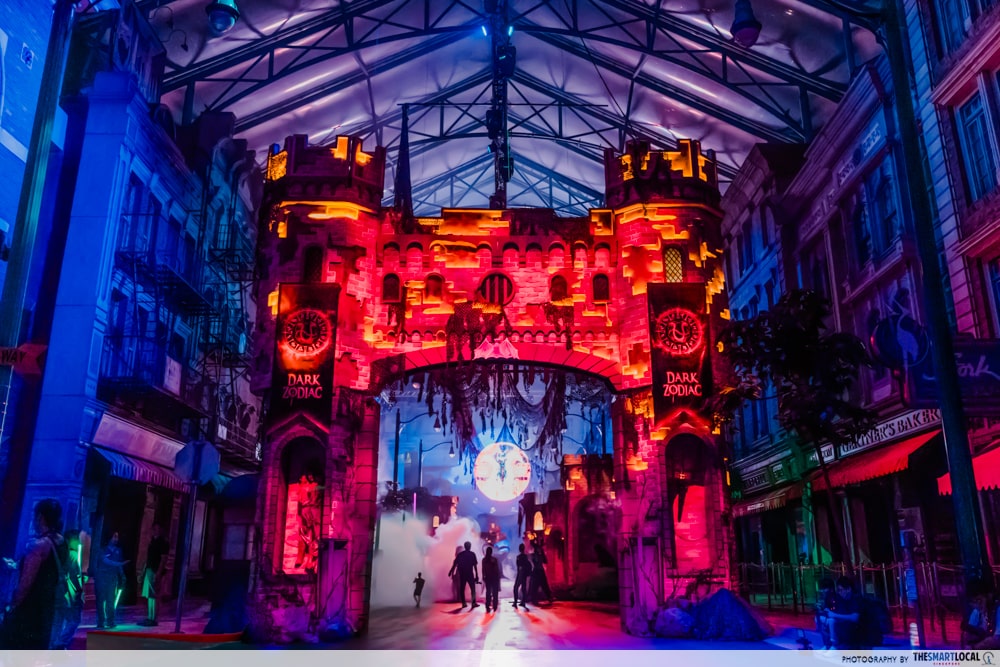 If you think you’ve been to HHN many times before, rest assured that the novelty factor from the completely original and different haunted houses this year is enough to keep you returning. The experiences have been elevated with the latest technology and scare tactics, and most importantly, the dedicated actors who take their role very seriously. Creepy much.

You know they’ve thought of everything when you hear popular metal and punk rock numbers playing in the background, adding to the whole atmosphere. Forget ghosting exes and your frightening boss, Halloween Horror Nights is where it’s at this Halloween. So, put on your comfiest shoes, and jio your friends to USS.

Get tickets for Halloween Horror Nights 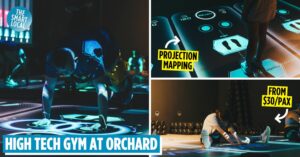 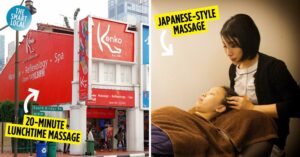