Hair loss isn’t something we often think about as adults who’ve yet to reach our golden years. That’s why experiencing it at 32 years of age was scary as heck.

For me, it came as a package deal with the birth of my first child – a far cry from others who experience it as part of genetics and health issues. But as my full head of hair lost about half its volume, this ordeal gave me a change of perspective: there’s absolutely nothing to be ashamed of when it comes to finding solutions.

Losing half my hair volume in 2 months

Before I gave birth, I would say that my hair was on the thicc side. Friends and family warned that I would lose hair after delivering my baby, so I thought I was prepared for the worst. Besides, nothing happened for the first two to three months.

It was about three months postpartum when my hair suddenly started falling out. It began gradually for a few days – nothing to worry about. Then, huge clumps of hair started falling out in the shower. I would collect at least one to two fistfuls of hair each time I washed it, which was once a day. 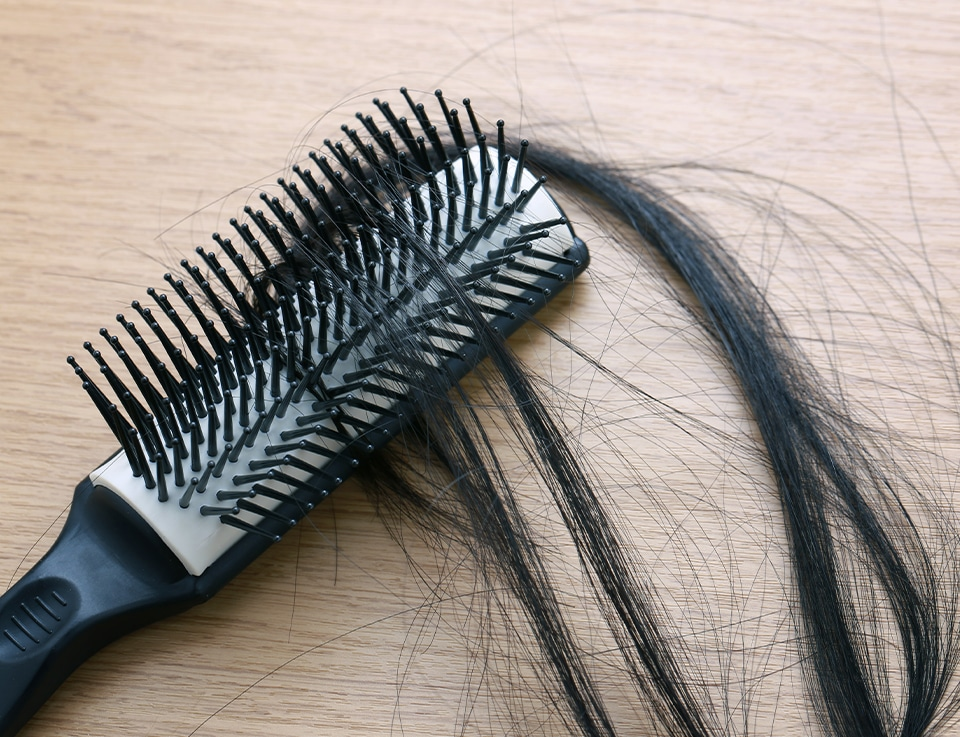 Photo for illustration – this was the amount of hair that would come off each time I ran my fingers through it.

It didn’t help that my hair was long, so my entire house would have strands everywhere. It was like a bug infestation, but in the form of human hair – equally icky. This continued every single day for about two months straight.

By the sixth month, the shower hair fall became less dramatic, although still present. This was when I noticed that I had lost about half of my hair volume, leaving me with an obvious balding spot at the front of my hairline.

How postpartum hair loss affected me

I guess I should point out here that although drastic to me, my hair loss doesn’t seem that bad on the outside. I still look like I have a full head of hair, except with tons of baby strands sprouting in all directions. Overall, my hair has just become flat and appears more unkempt than before.

But that doesn’t mean my confidence hasn’t taken a hit. 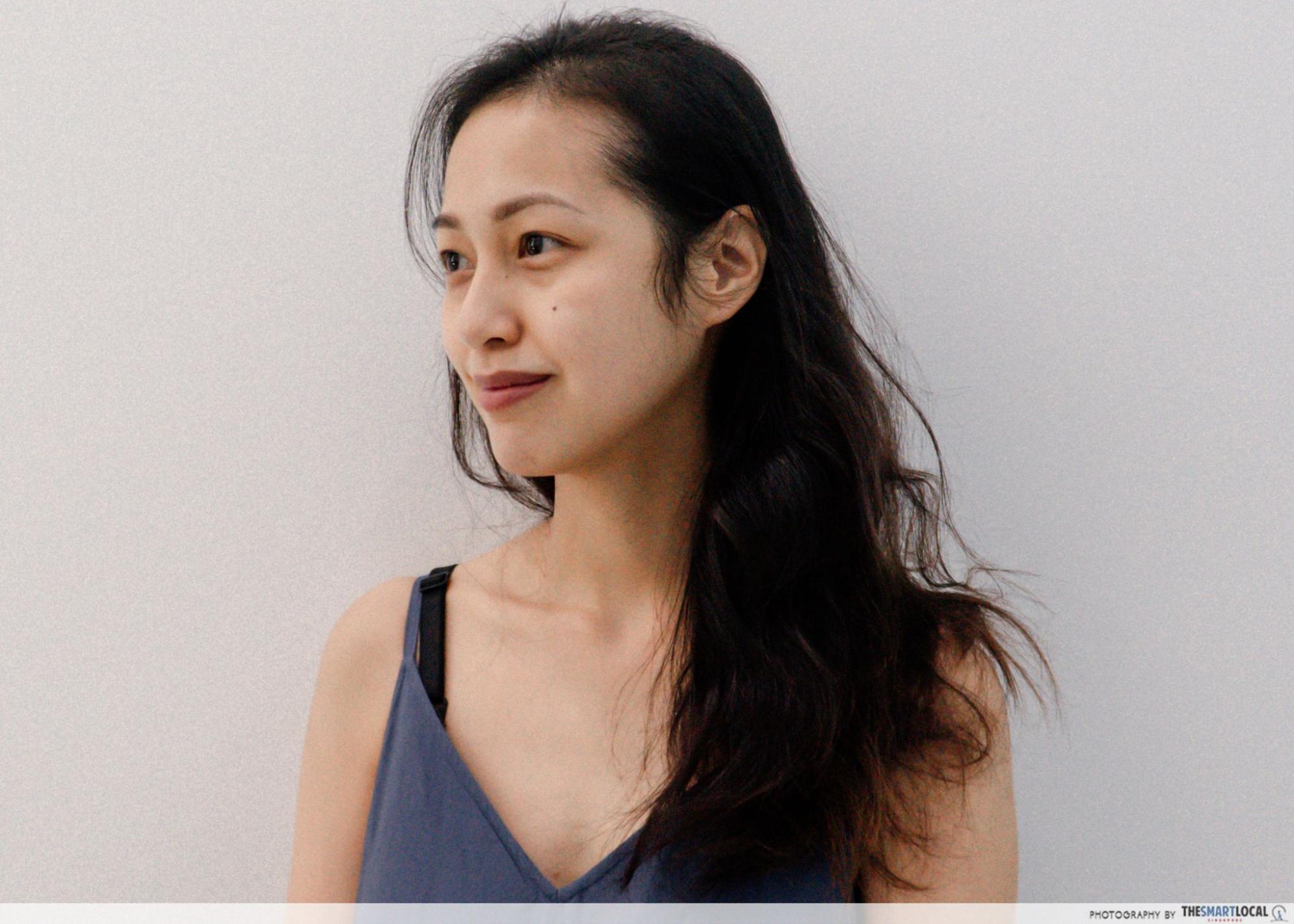 The worst part for me was visiting other peoples’ homes and leaving them “souvenirs” of my hair strands all over their floor.

It was even more embarrassing when I went over to my MIL’s, whose home is always impeccably clean. I would sit on her couch and my hair would fall all over her white cushions. When no one was looking, I’d subtly pick up the strands I dropped 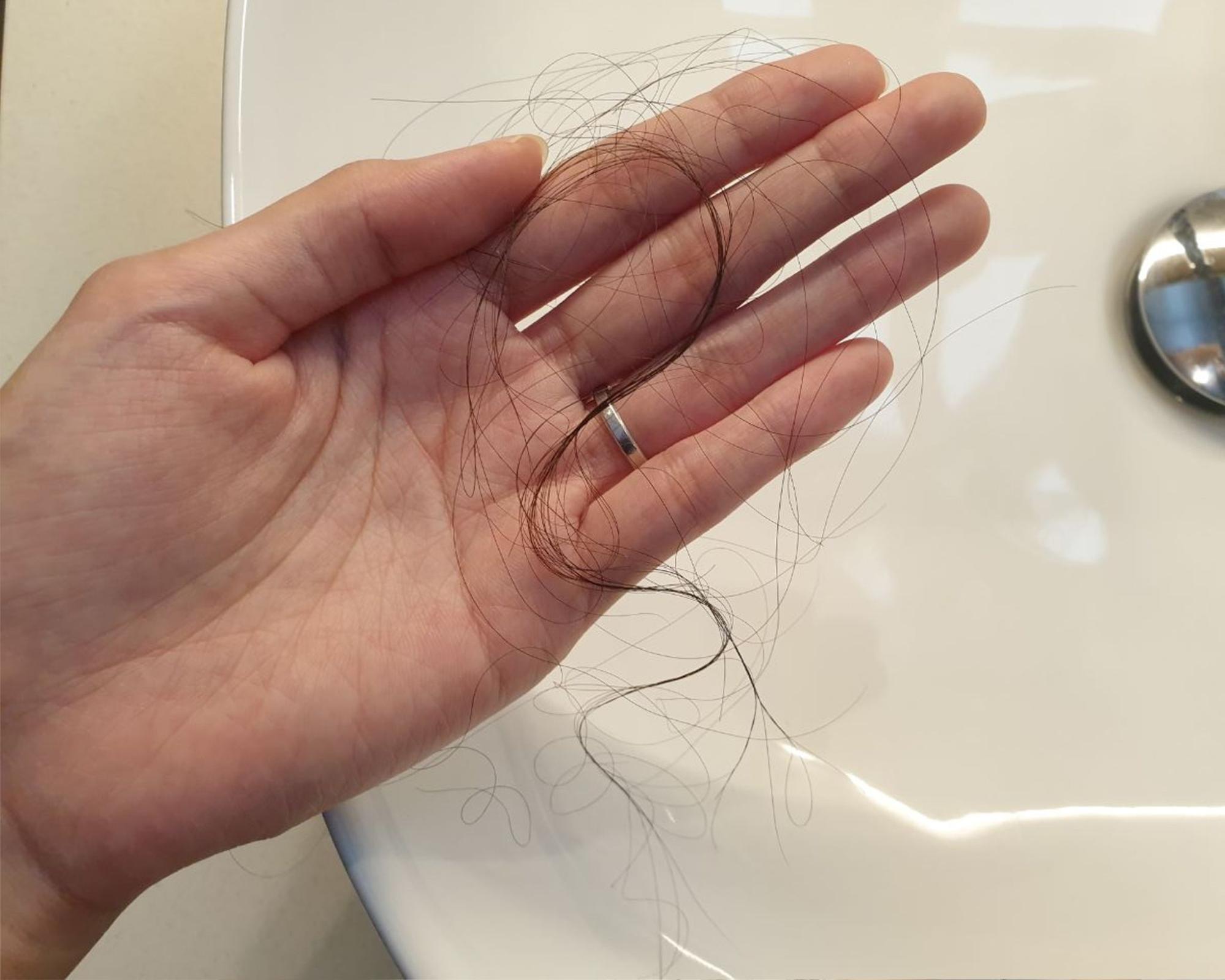 I would leave behind a trail of hair wherever I went – kind of like Hansel and Gretel.
Image credit: Jessica Fang

That said, I had to be very careful not to touch my hair when I was around people. If I did, 100% of the time, I would accidentally pull out several strands of hair mid-conversation. I’d notice my friends glancing at it but being careful not to say anything. They’d just side-eye me while I’d sheepishly untangle strands from my fingers.

Losing so much hair also meant I couldn’t style it as I used to. My chic buns became flatbread with grass sticking out, and the slight pouf I used to do when tying up my hair became a deflated souffle. My “real” parting also reappeared – revealing itself to be off-centre from the middle of my head.

Of course, I only had myself to blame for my uncontrollable hair loss. Post-pregnancy hormones aside, I had developed habits that contributed to this.

Being a new mum in super humid Singapore, I found myself sporting a bun or a ponytail to keep cool throughout the day. Plus, I had to keep those grabby baby hands away from my locks. It’s known that tying up your hair can tug on its roots and contribute to hair fall, so this certainly didn’t help my case. 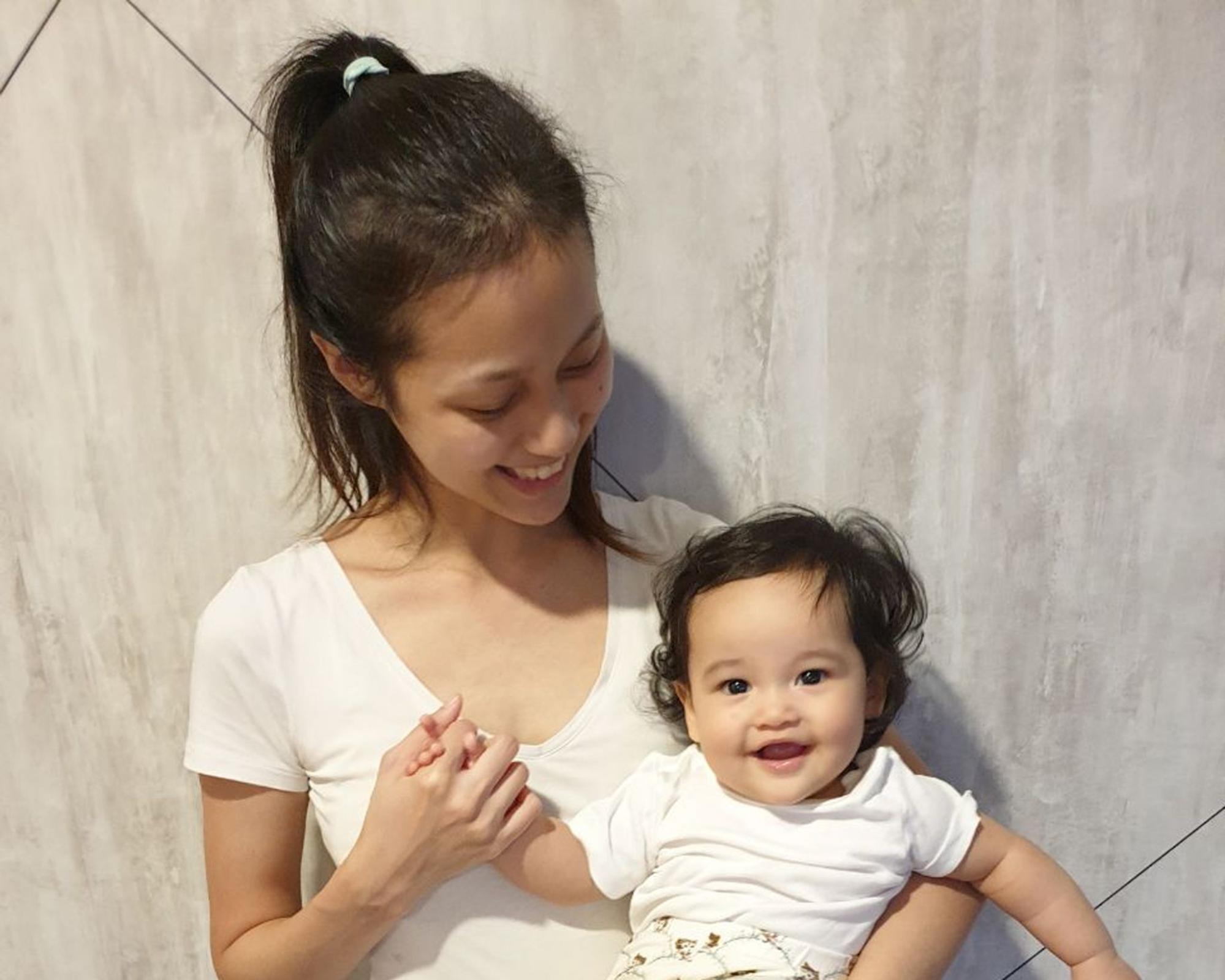 A ponytail is usually my default ‘do, and you can see baby hair sprouting mercilessly from my head.
Photo credit: Jessica Fang

I was also lacking sleep and not cleansing my scalp thoroughly – both aggravators of hair loss. With a new baby in tow, self-care was next to impossible, so these stressors likely added fuel to the flames.

Needless to say, I had to do something about it instead of just feeling unconfident all of the time.

Once I felt like I’d lost half my hair volume, I started seeking solutions. The first thing I did was stock up on supplements since I heard that these would help with postpartum hair loss. These were great for breastfeeding but had little to no effect on my hair as it continued to fall out in chunks. 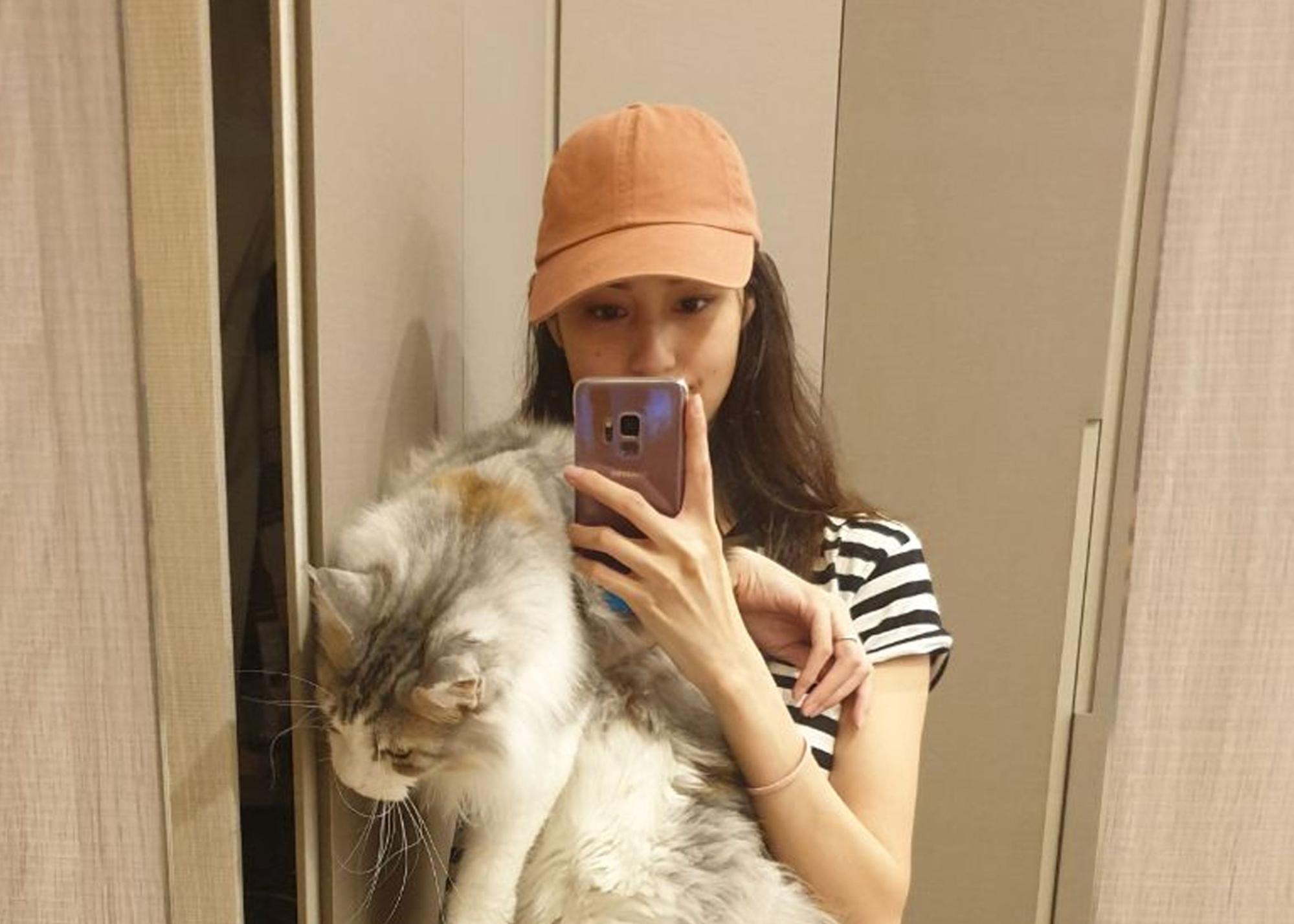 Wearing a cap was never part of my daily style until recently
Image credit: Jessica Fang

Nevermind. I sought the next easiest solution: wearing a cap to cover up really bad hair days. I also tried to resist tying up my hair too much, to lessen the “pulling” of my roots. I would also “curl” my hair naturally by having it in a bun for a couple of hours before heading out – to create the appearance of volume.

I was also able to try a stem cell treatment on my scalp. This treatment from PHS Hairscience activates hair growth on a cellular level and helps stop weaker strands from falling out. Although the results were not immediate, the treatment helped me identify ways to care for my scalp and gave me hope that my hair could return to its original state.

And of course, once my hair fall is under control, I’ll likely get a haircut to reshape my hair and freshen up my look.

Changing my perception towards hair loss

It’s been seven months postpartum and my hair fall seems to finally be slowing down. If there’s anything this ordeal has taught me, it’s that hair loss is nothing to be ashamed of. My hair may look like it’s been through an electrical storm, but there is no point judging myself – or others with hair loss – since it’s unavoidable. 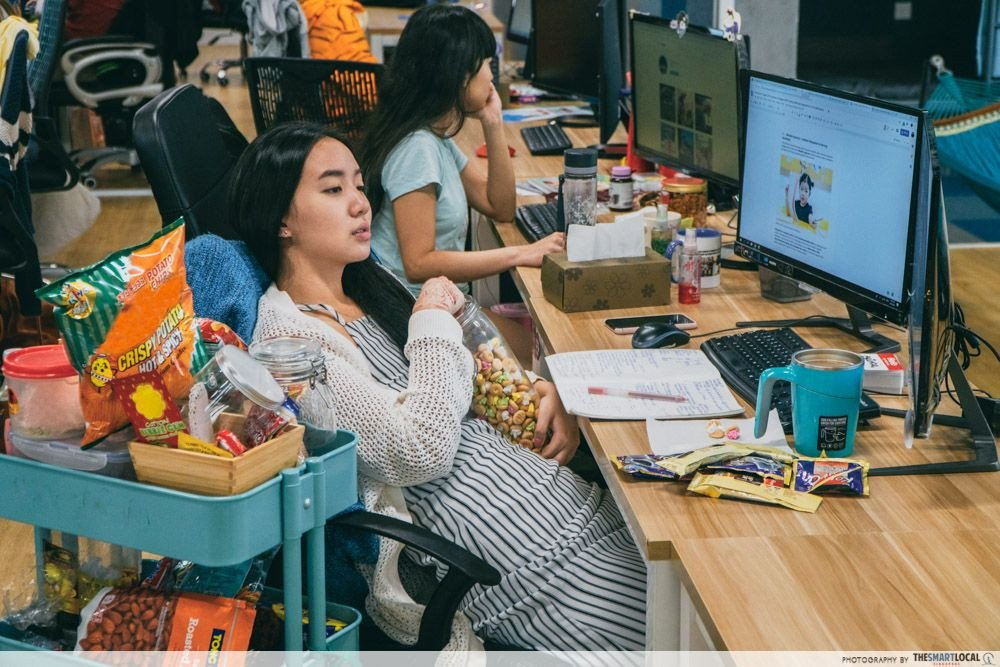 You know what they say – eating too many salty snacks can lead to hair loss.
Photo for illustration only

That’s because it occurs to nearly everyone for any given reason, including:

Thankfully, there’s a myriad of hair loss solutions out there, from hairpieces and extensions, to hairstyle changes and hair treatments.

Initially, I was wary about admitting that I needed help – after all, when you’re faced with hair loss, it’s only natural to feel shy about seeking solutions. But after trying to “cover up” thinning spots on my head, I realised that finding a solution was just one small step to overcoming the problem. Ultimately, I would be able to regain some confidence once I passed this hurdle. 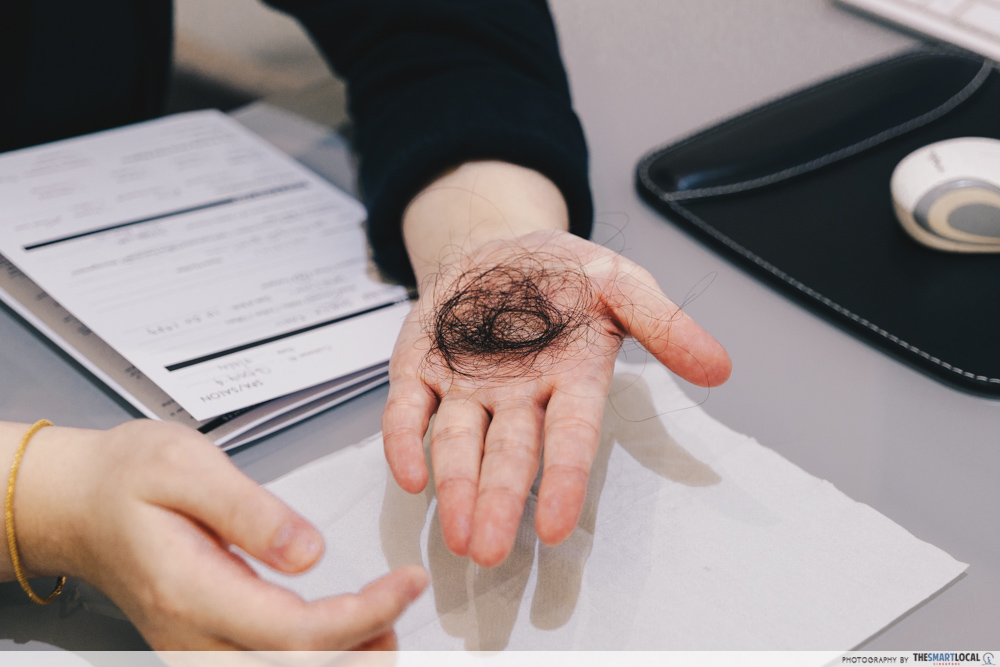 Evidence of pretty serious hair loss during my treatment session

That’s why I volunteered loudly and proudly when we were offered a trial for the Miracle Stem Cell Solution (MSCS) at PHS Hairscience. To my relief, my teammates were encouraging rather than judgemental when I revealed that I had been facing drastic hair loss over the past few months.

Trying a stem cell treatment for the first time

It may sound a tad daunting, but the 45-minute MSCS treatment is much like a very relaxing spa session.

This 100% non-invasive treatment basically targets hair loss at its literal roots. It activates follicular cells and strengthens hair follicles, nudging them to regrow hair – all at a cellular level. All this is done with PHS Hairscience’s SigGrow™ technology that “awakens” your cells to go through its natural hair growth cycles. 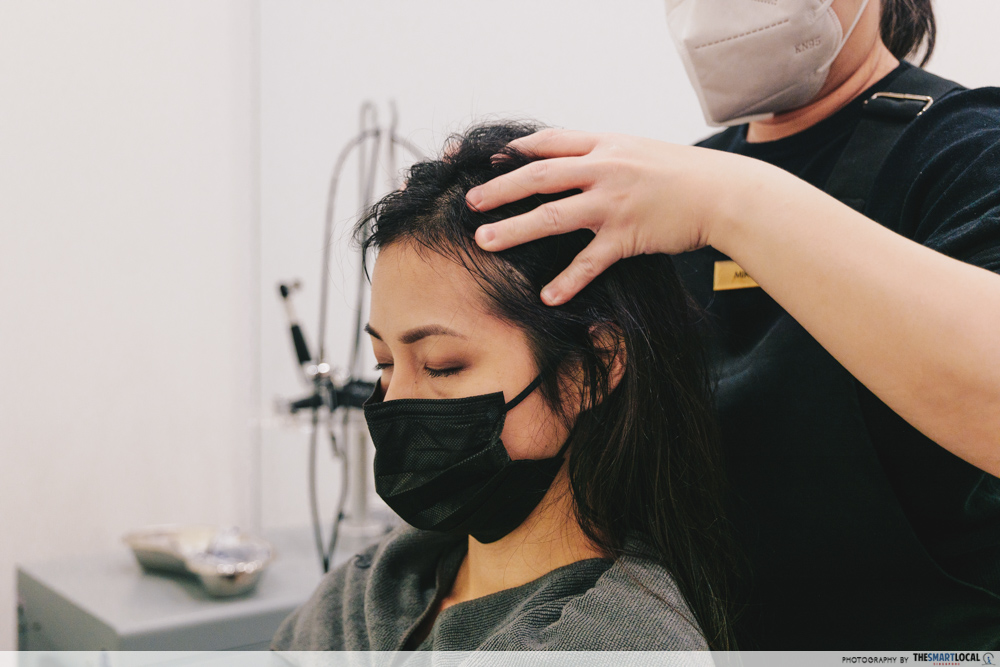 I was told that it would be much like a pampering session for the hair, so I was all for it. 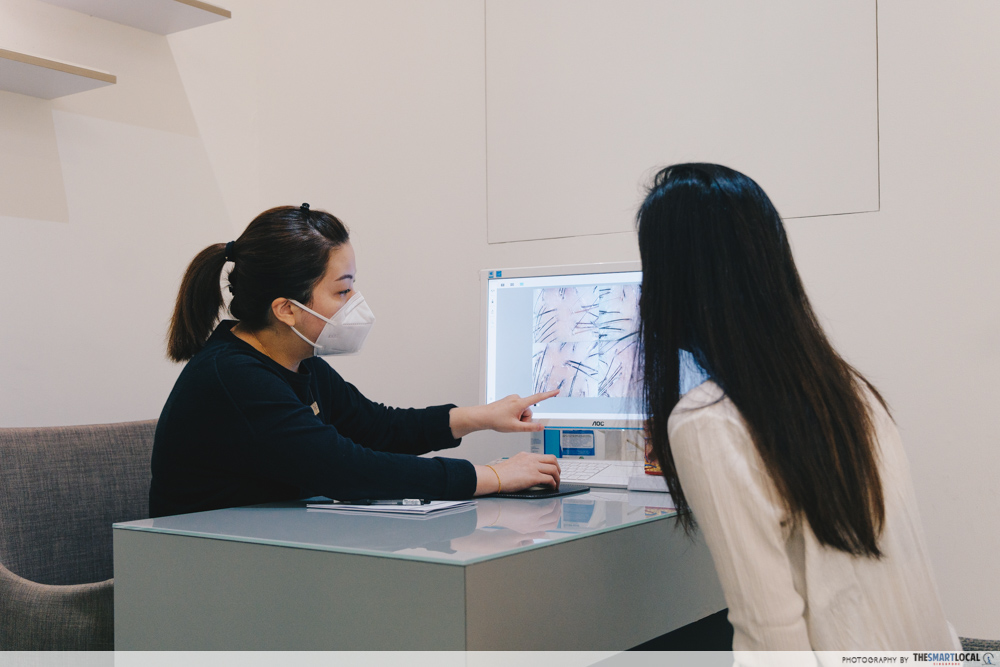 My session at PHS Hairscience started off with a consultation to address my problems, where they did a scan of my scalp. The consultant pointed out my problem areas, such as evidence of thinning hair and clogged pores that are causing my hair to fall out.

With that in mind, I was carted off to start my treatment. 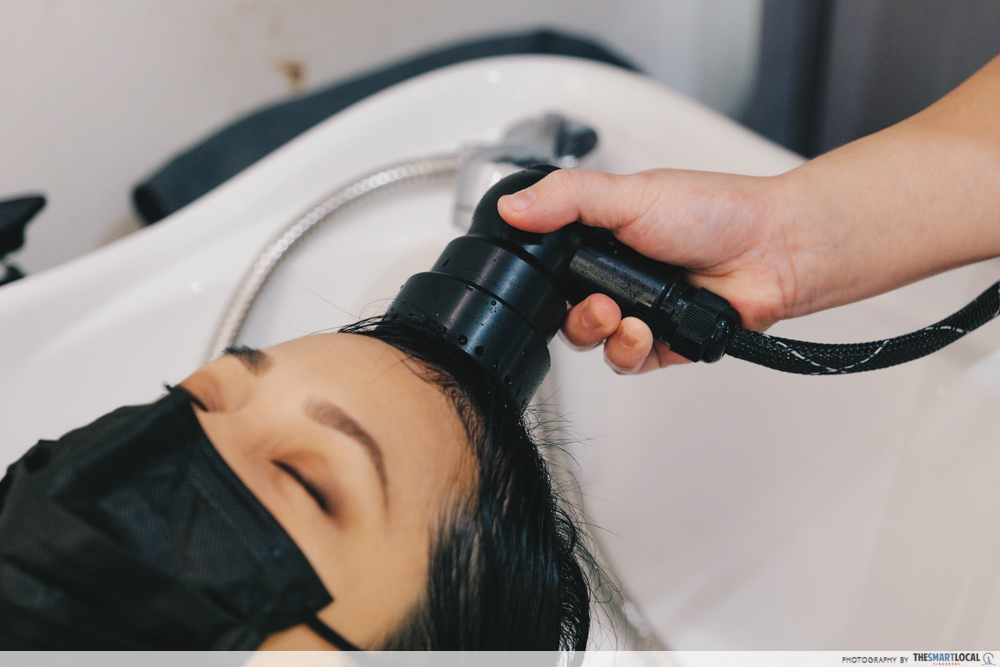 Hydro Cleanse to loosen clogged pores and dirt from my scalp

It began with a relaxing shoulder massage, followed by a double cleanse hair wash to rid my scalp of clogged pores. Here, the consultant did a Hydro Cleanse on my scalp – basically a water jet that blasts grime away from my scalp using water pulses. It felt like a soothing head massage – perfect if you’re having a headache from tending to a crying baby all night. 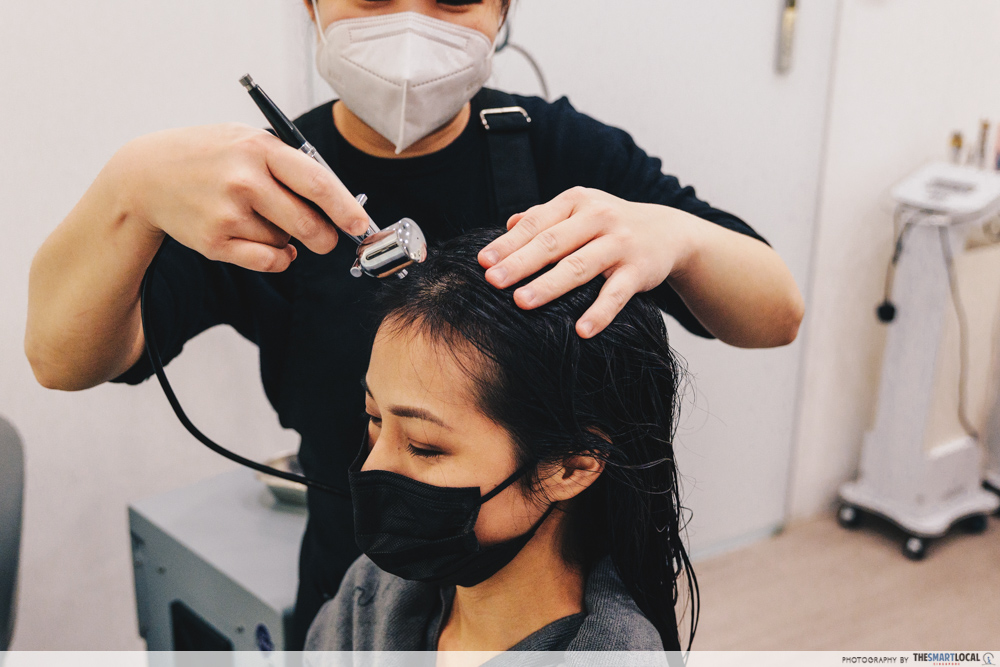 Next, it was time to oxygenate my scalp. Not many may know this, but oxygen plays a huge part in helping our scalp renew its cells – the same way we need it to breathe. During the treatment, the consultant will spray your entire scalp with 95% oxygen. It feels extra shiok as it’s cooling on the skin. 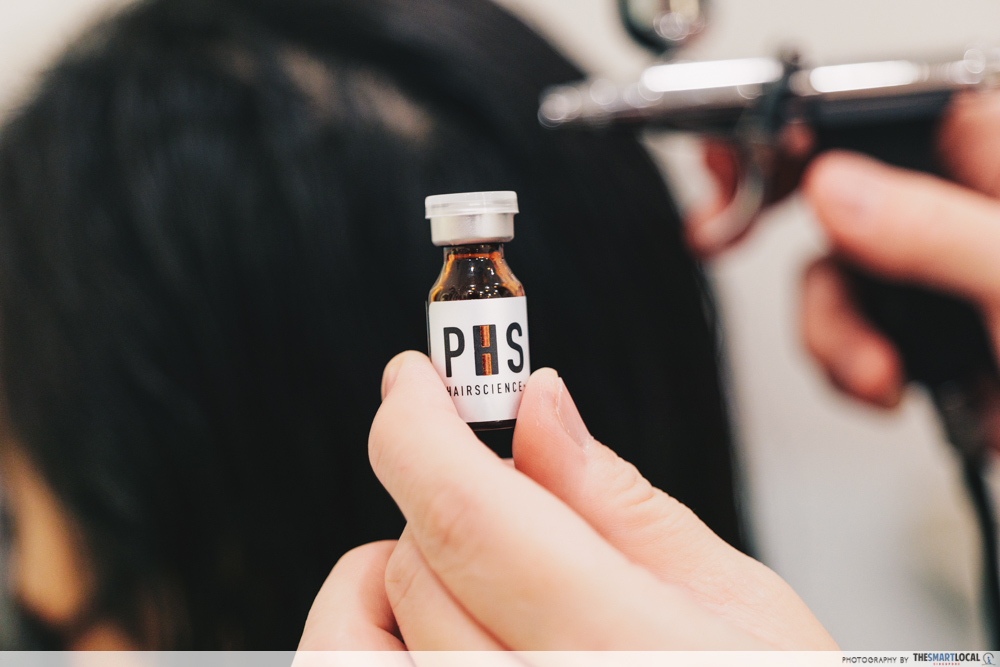 Following this was the application of the star of the show: the SigGrow™ ampoule. It uses the same oxygenating machine for application, but the consultant will lay extra focus on problem areas of your scalp. For me, it was my parting and hairline above my forehead where there was visible thinning. 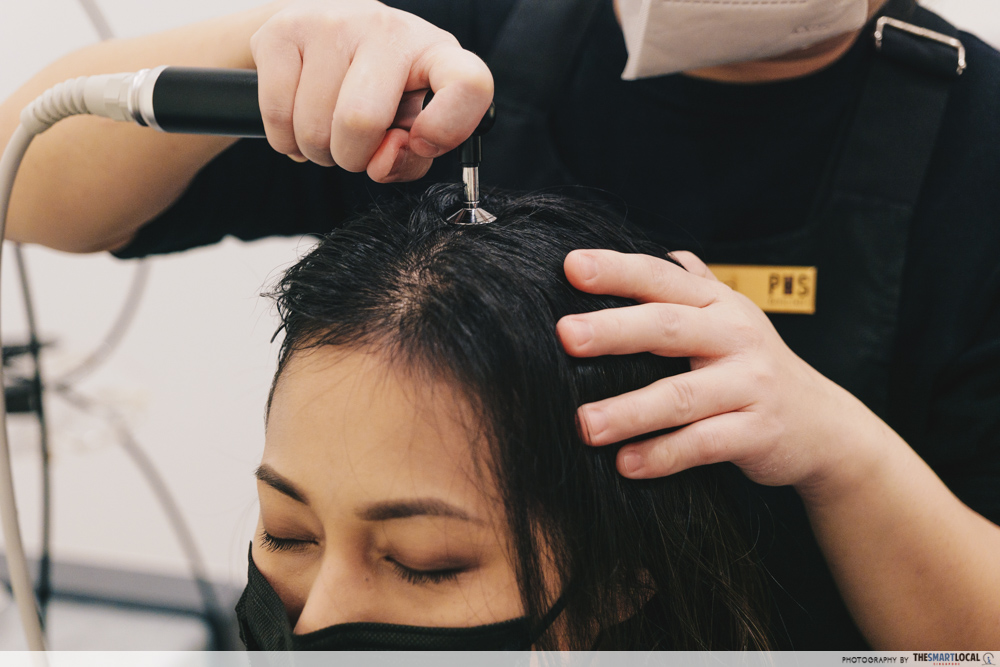 The formula was “pumped” into my skin with a Hyperbaric Oxygen Treatment. This also uses 95% oxygen to help the treatment penetrate deeper into the scalp, allowing for more effective absorption. The gentle stamping also felt much like a cool, relaxing massage. 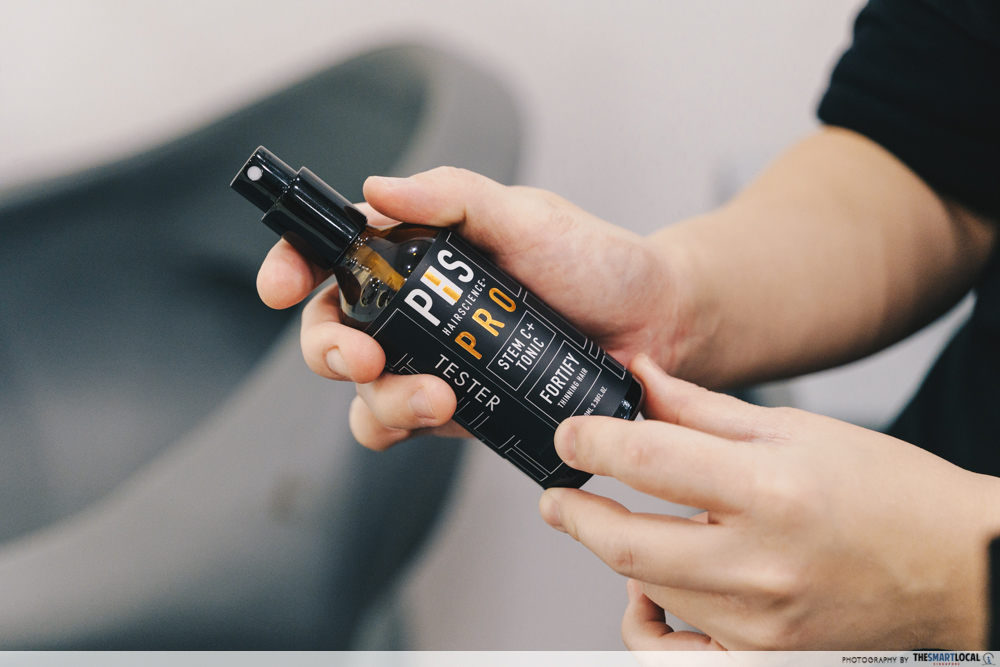 Finally, it was time to wrap up the treatment. They applied a scalp tonic to fortify my roots, as well as ADV Argan Oil to hydrate my hair strands, ADV Soothe Calming Gel to help with scalp inflammation , and ADV Hydration Cream to protect my hair from external damage. Following this, I was free to go about my day as per normal.

All in all the treatment took just 45 minutes – enough time for me to totally relax while giving my scalp some TLC in the middle of the day.

Hair will naturally take time to regrow to its former state, so it’s understandable that I wasn’t able to see immediate results. Nevertheless, I was happy to know that a natural, non-invasive solution for hair loss was accessible to me at PHS Hairscience. Plus, this treatment is safe for breastfeeding mummies. 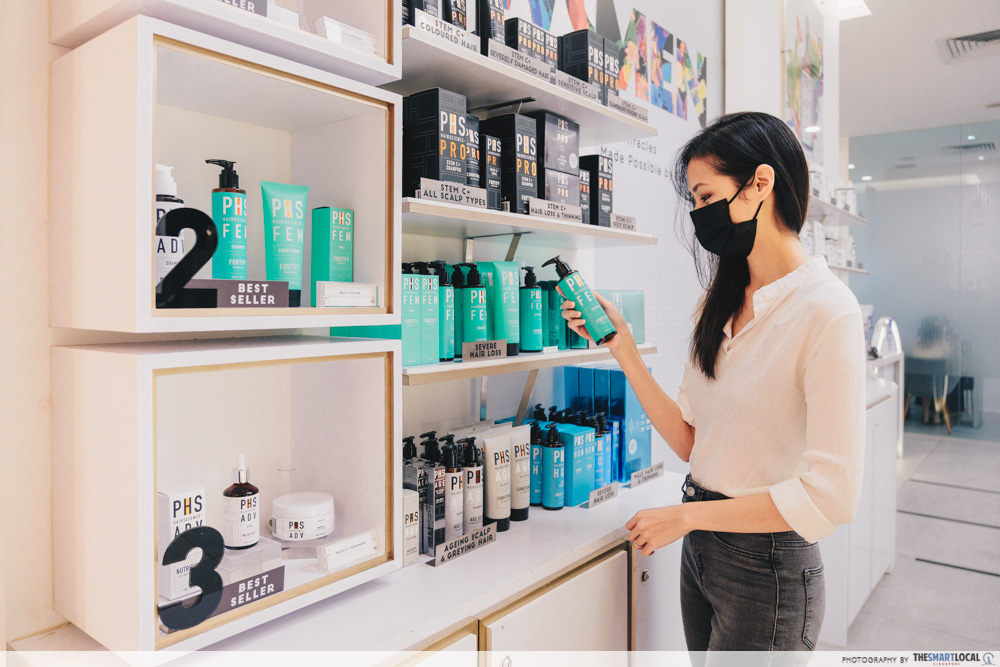 With further weekly treatments, I would continue to fix my hair fall problems and see more visible results as well. All that, plus enjoy 45 minutes of pure pampering – head and shoulder massages, cooling solutions on my scalp, and an improved appearance of my hair overall. 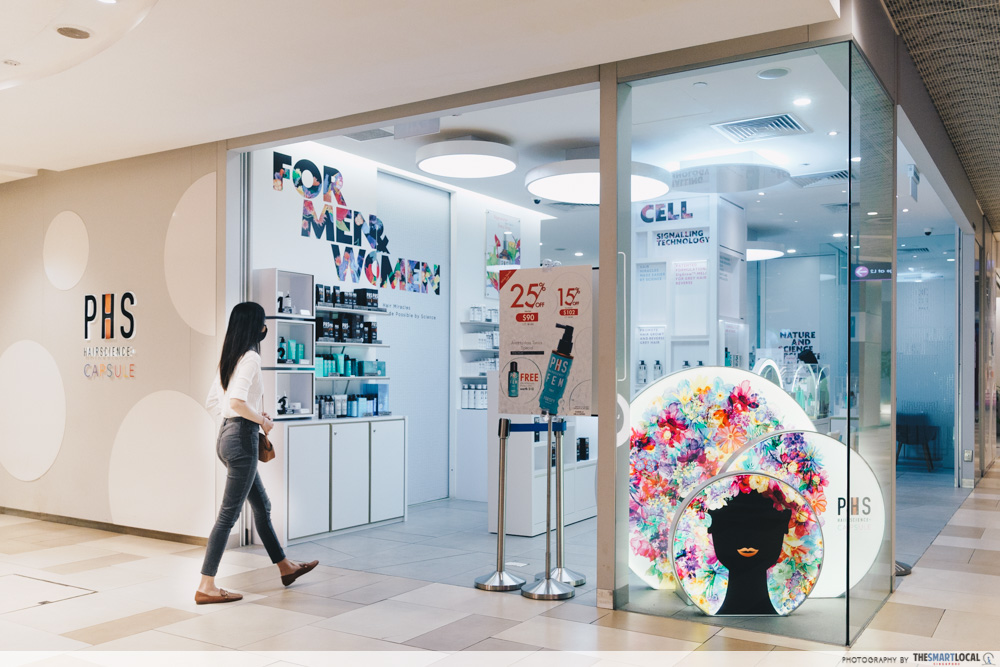 There’s absolutely no shame in finding an effective fix for hair loss. If you want to regain some confidence, or simply want some R&R for an afternoon, book a trial session for the Miracle Stem Cell Solution treatment. It’s just $68 (U.P. $415) for first-timers, and you’ll get to literally zoom into your scalp to learn more about how to target your hair loss issues.

This post was brought to you by PHS HAIRSCIENCE.
Photography by Zhou Jin Quan. 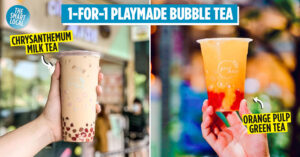 New Playmade Outlet At Buona Vista Has 1-For-1 Bubble Tea From Now Till 20th Oct 2021
Buddha Tooth Relic Temple: Sacred Temple With A Relic Chamber Made From 320KG Of Gold 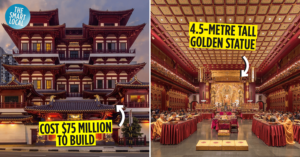